An Extra Dose of Adrenalin: The TAG Heuer Carrera from 2000 to Today

Now under the aegis of LVMH, TAG Heuer intensified its commitment to motorsport in the new millennium. After eleven years as the Formula One’s official timekeeper, TAG Heuer took over the timekeeping for IndyCar, the most popular American racing series, and thus timed the famous 500-mile race in Indianapolis, where the racers’ performance is measured to an accuracy of 1/10,000th of a second. TAG Heuer is also active in rally championships. And it’s the watch brand with the most cumulative wins in Monaco (15) alongside McLaren, with whom it has maintained the longest partnership in F1 history (30 years). The partnership with McLaren in the Formula One was followed by a new cooperation with the young Aston Martin Red Bull Racing Formula One team. This was the first time ever that a watchmaking brand’s name was directly associated with an official F1 team designation. The car was called Red Bull Racing – TAG Heuer RB12. The Swiss watch brand showed its affinity for futuristic technology as a partner of the Formula E, in which only electrically powered racecars are eligible to compete. 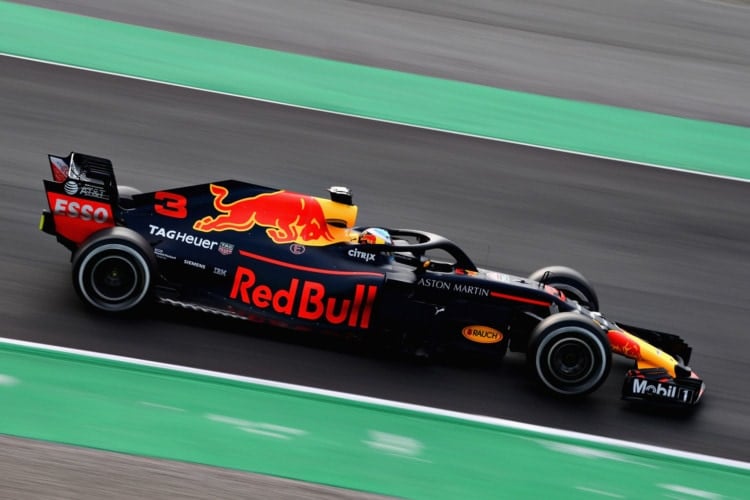 A watch brand is directly associated with an official Formula One team for the first time: Red Bull Racing – TAG Heuer RB12. 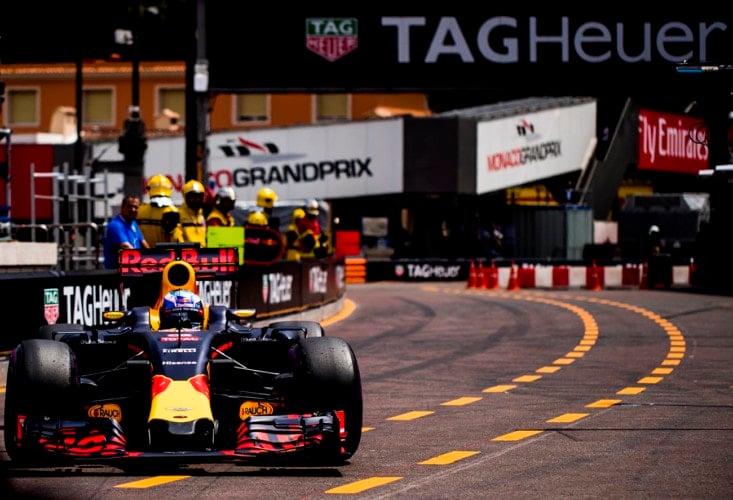 And since 2011, the watch manufacturer has kept time at the most glamorous of all motorsport races: the Grand Prix of Monaco. TAG Heuer’s CEO Jean-Claude Biver gave an extra dose of glamour to this event in 2017, when he invited guests to celebrate the race’s 75th birthday by joining him aboard the SeaDream yacht. Biver’s guests included the Australian actor and TAG Heuer brand ambassador Chris Hemsworth, his wife Elsa Pataky, and the Aston Martin Red Bull Racing Driver Daniel Ricciardo. While Hemsworth played the role of James Hunt, the “rock star of the Formula One” in the motion picture “Rush,” his colleague Patrick Dempsey participated in actual races behind the wheel of a Porsche 911 – and repeatedly finished among the best three competitors. Dempsey too is closely affiliated with TAG Heuer.

TAG Heuer has never shown its genetic proximity to the racing sport more clearly than it does today. This is also true for the watch with which it all began. This model has undergone further development at a very sporty pace since 2000. The Heuer Carrera celebrated its comeback as a retro watch in the mid 1990s. In the new millennium, it soon occupied the center of every TAG Heuer collection. The Heuer Carrera morphed into the TAG Heuer Carrera. This chronograph was now powered by ETA calibers. The legendary chronograph was enlarged and given both a scratch-resistant sapphire crystal and an updated design. With its fine lines, the eighth generation still resembled the classical Carrera, although the new model had a larger case than its forebear. Caliber 17 determined the dial’s arrangement, which positions the small seconds at the “3,” the elapsed hours at the “6” and the elapsed minutes at the “9.” The Heuer Carrera celebrated its 40th birthday in 2004 with the release of a limited edition that resembled the classical Heuer Carrera and was engraved with Jack Heuer’s signature. The justifiably admired era of the 1960s finally came to its end in this watch’s design with the debut of the ninth generation in the mid 2000s. The designers’ gaze was now clearly focused toward the future. The decidedly new and sporty-looking TAG Heuer Carrera chronograph was equipped with Caliber 16 and given a bold bezel with a tachymeter scale. In 2006, the brand surprised aficionados with the premiere of the Calibre 360 concept watch. It had two separate movements – one for the ordinary time, the other for the chronograph – and each was powered by its own barrel. The new chronograph movement developed by TAG Heuer was the world’s first with 1/100th-of-a-second accuracy. The brand’s own Calibre 360 showed that the journey was headed toward manufactory competence: when it debuted at Baselworld in 2010, it was the first to encase TAG Heuer’s own manufacture movement (Calibre 1887). 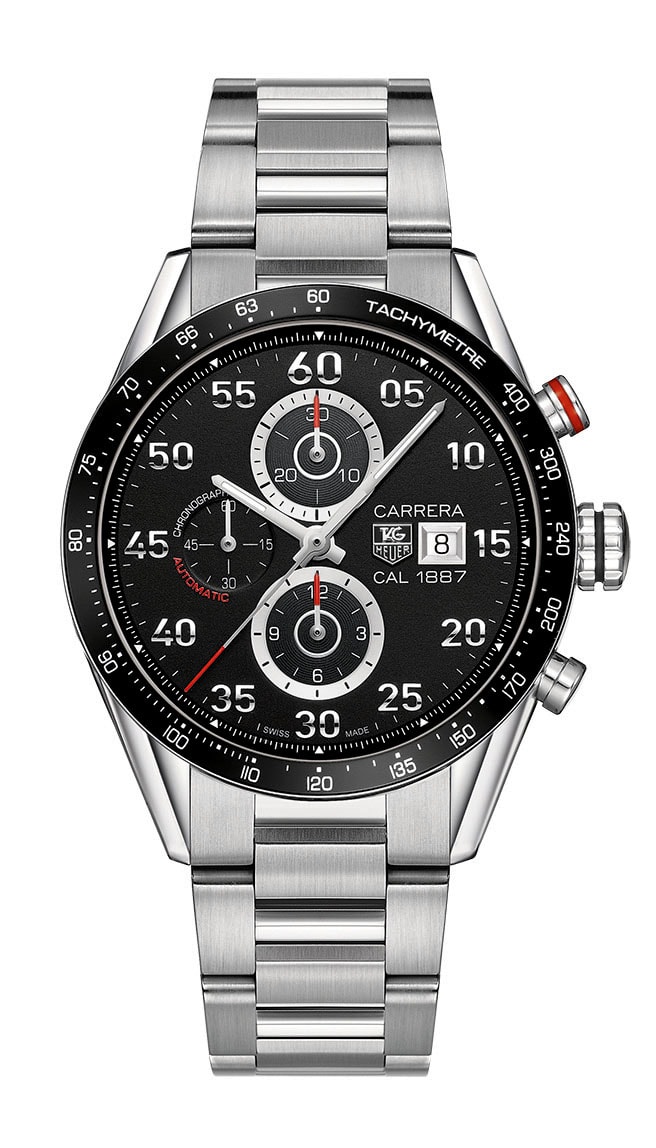 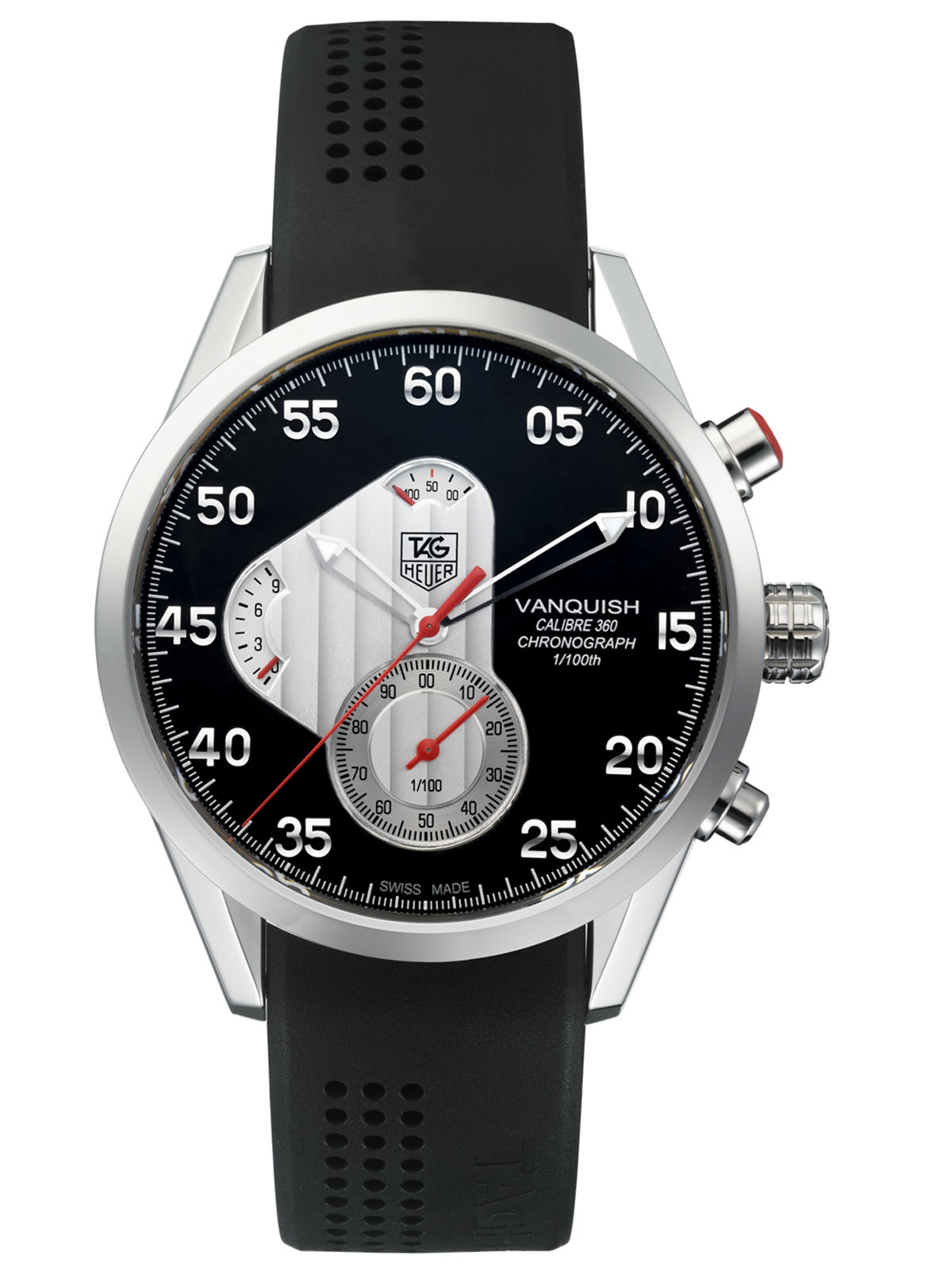 One of the rarest models ever produced by TAG Heuer: the TAG Heuer Carrera Vanquish Calibre 360. Only 11 specimens of this concept watch were produced in 2005. They command high prices at auctions.

A new era dawned in 2015 when Jean-Claude Biver, president of the LVMH watch brands, was appointed CEO of TAG Heuer in La-Chaux-de-Fonds and the eleventh generation of the Carrera chronograph, the TAG Heuer Carrera Heuer 01 with the new in-house movement Heuer 01, came onto the market. The watch featured not only a new TAG Heuer manufacture caliber, but also a new case and construction.

Its emphatically purist design revealed the chronograph’s controlling elements on the front of the watch, where it also sported a filigreed pierced date disc. The back of the case also offered views into the mechanisms. Unconventional materials such as titanium carbide and rubber were used in the construction. The case of the TAG Heuer Carrera Heuer 01 consists of twelve different components and supports individualized combinations of materials, colors and surfaces. The TAG Heuer Carrera Heuer 01 is also impressive thanks to its price: it is the only 100% manufacture chronograph that retails for less than 5,000 Swiss francs. 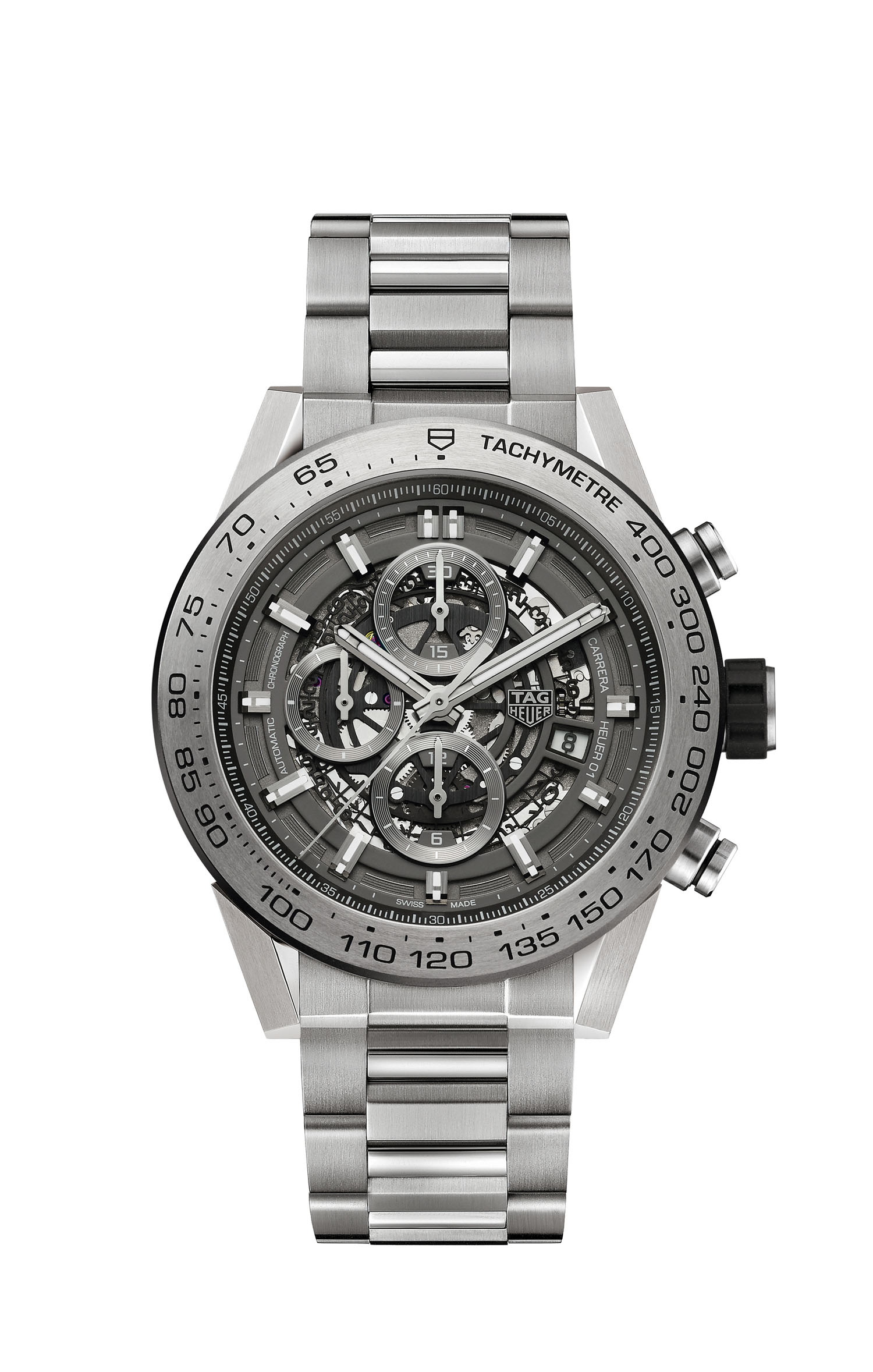 The automatic chronograph TAG Heuer Carrera Calibre Heuer 01 Grey Phantom from 2016 is made of lightweight titanium, which has a monochrome gray shimmer. 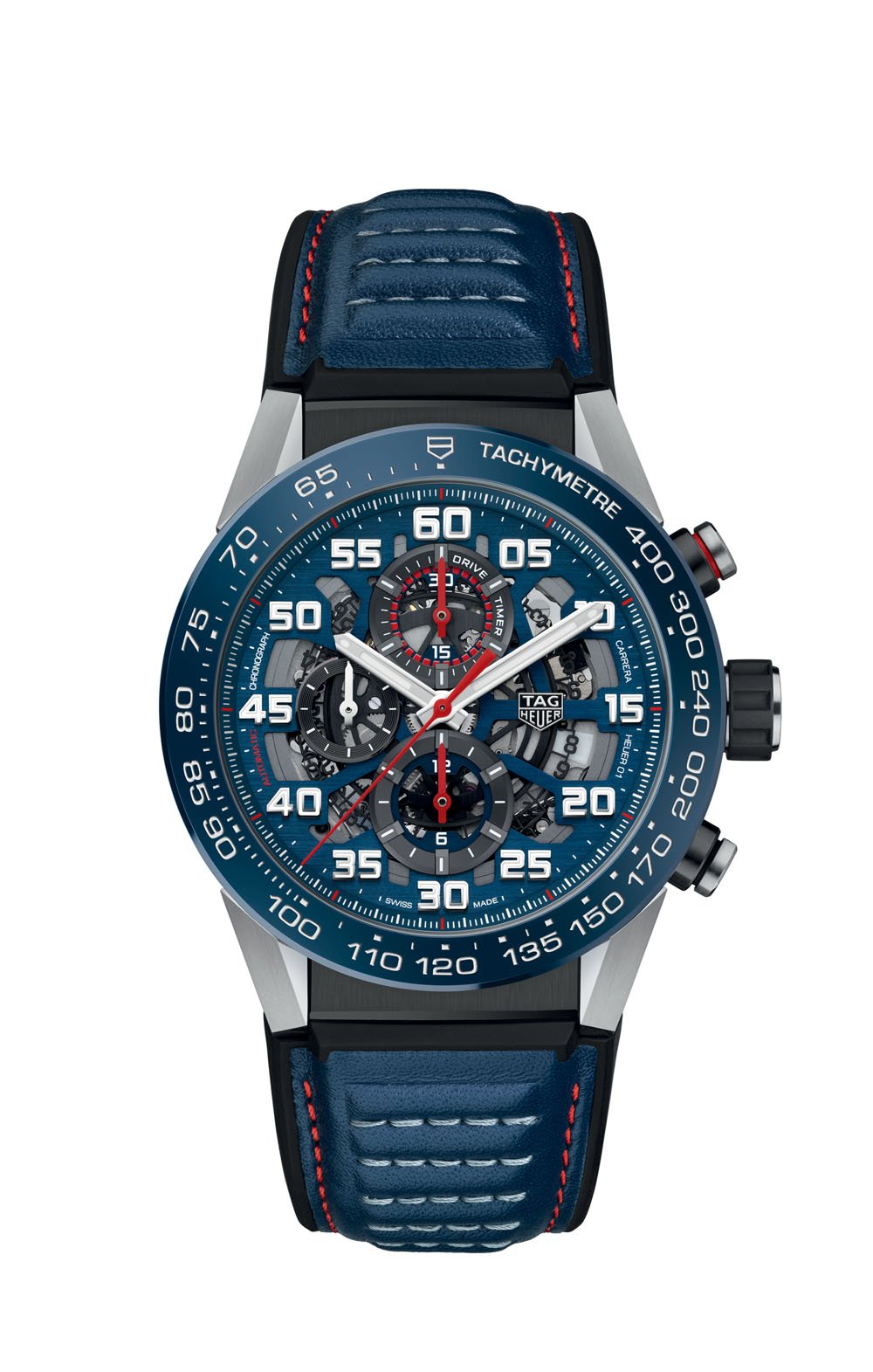 Just six months after the “Heuer 01,” which is the heart of a new collection of elegant and contemporary manufacture chronographs, TAG Heuer presented the Heuer 02T, a COSC-certified automatic chronograph with a flying tourbillon made of titanium and carbon. It is the only Swiss-made COSC-certified automatic chronograph with a tourbillon that costs less than 15,000 Swiss francs. Jean-Claude Biver says, “The TAG Heuer Carrera 02T with chronograph and tourbillon is sold at a sensational price and stands for the path that we have been pursuing since 2016.” For the 100th annual race in Indianapolis, TAG Heuer delighted motorsport fans with a limited special edition: the “TAG Heuer Carrera Calibre Heuer 01 Indy 500” alluded to the famous racetrack with a red insignia on its tachymeter bezel. With the TAG Heuer Connected Modular 45, which was launched in the spring of 2017, TAG Heuer proved that tomorrow’s wristwatch can be simultaneously digital and mechanical. And the TAG Heuer Carrera chronograph shows that it is in excellent shape after 55 years: the brand fetes the birthday of the classic model with a brand-new model at Baselworld 2018. This new chronograph will again spark enthusiasm among motorsport aficionados. A cornerstone of the brand since 1963, an icon of avant-garde technology and strictly contemporary design, the TAG Heuer Carrera once again is ahead of its time.

Hot Topics
Dear Watch Fans, Why So Angry? — Don’t Let Your Passion Get The Better Of You
97 comments
Hands-On With The Polarizing Tudor Black Bay Pro
70 comments
The Unexpected Perfect Two-Watch Collection — Rolex Sea-Dweller And Day-Date
69 comments
Introducing The New Fortis Stratoliner — Tested For Space Travellers
57 comments
Hands-On With The Rolex GMT-Master II 126720VTNR “Destro” — Does It Make Any Sense?
47 comments
Popular
Rolex GMT-Master History And Overview Of All Major References
Robert-Jan Broer
16
(From The Archives) Shut Up & Read The Truth About Cartier Watches
George Cramer
21
You Asked Us: Rolex Submariner vs Omega Seamaster
Robert-Jan Broer
21