A Closer Look at the Angelus Novelties For 2016

Last year we reported about the launching of Angelus. The brand as we know it in the vintage market is the equivalent of extremely high quality with in-house movements and historically significant pieces. Some if you might remember the #TBT I did a few months back on my vintage Angelus 215 L.E. and I’m happy to say that more vintage heat from Angelus is in the pipeline. This time however, I’d like to talk to you about their 2016 novelties. Bert and I paid them a visit and had a look at their collection.

Since the re-launch of the brand last years there has been a lot of criticism coming from all sorts of directions that Angelus did not stay true to its roots. People were disappointed that the new direction the company took was a bit disappointing. I beg to differ. Yes, the watches they produce share very small physical resemblance to their vintage counterparts but that was the whole idea from the beginning. If you know who are behind Angelus (the same company and people behind Arnold & Son) you should know that these guys are not in business to produce heritage pieces. They pay homage to the classics in their own way. There is a lot of thought put into these models on how to represent the old values that the vintage timepieces bore. 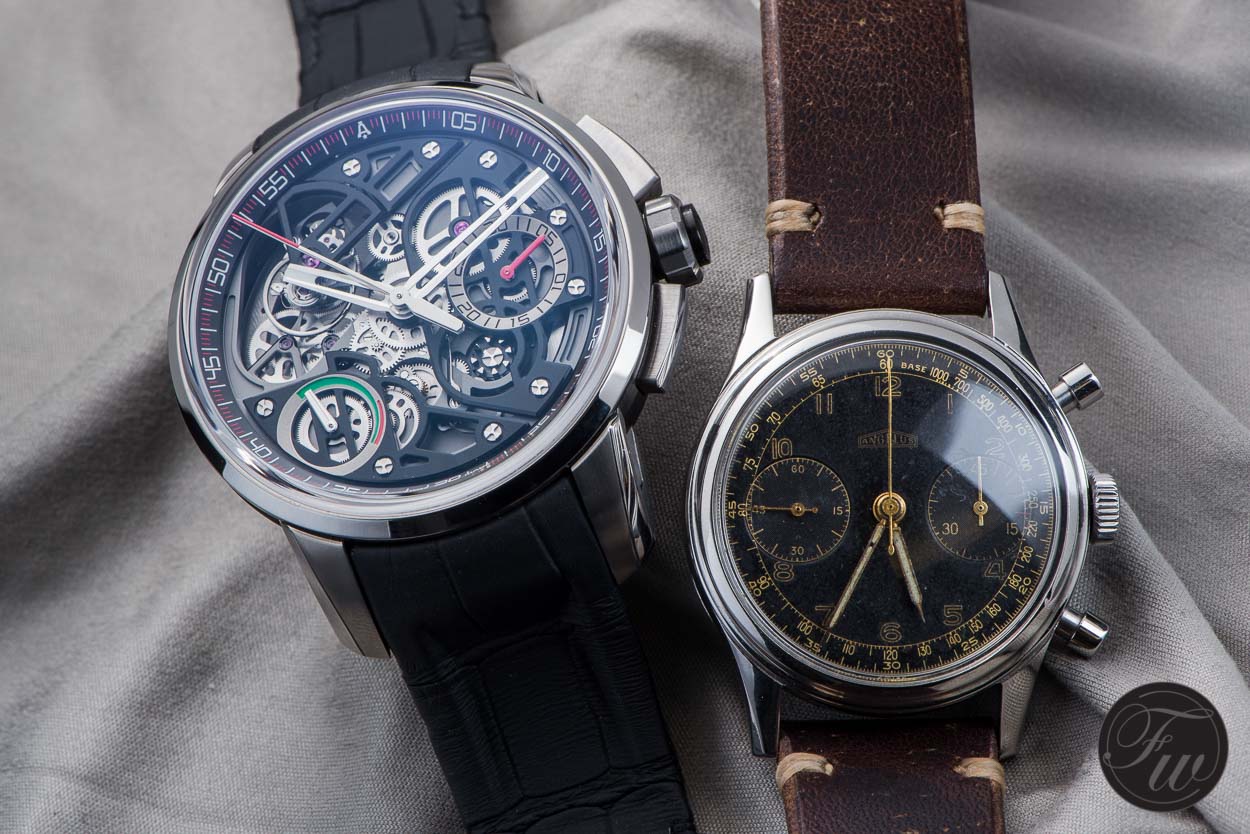 Dr Sébastian Chaulmontet, Head of Innovation at Arnold & Son and Angelus, is a very passionate and knowledgeable person when it comes to vintage watches and watches in general. He is a huge vintage watch collector as well, so he knows his trade. I think half of the meeting passed by talking about vintage watches instead of the novelties. But we were there to have a look at their brand new collection and Sébastien explained every little detail to us. 2015 was the introductory year for Angeles with only one watch (the U10) this time they released three new models: U20, U30 and U40. All of them are amazing watches designed and built entirely in-house and now we will look at them one-by-one.

The U20 was designed as a mechanical haute horologerie sculpture. The movement is built for structural optimization, like a supercar. The main idea behind the project was to let the light into the watch. The U20 was built keeping this in mind from the ground up. They used a sapphire (!!) base plate for the movement. Every superfluous material has been removed from the movement, which was designed in a symmetric shape. Bridges are made of titanium to reduce weight. To allow more light to enter the case, the master watchmakers at Angelus did not use a bezel. Instead a raised dome sapphire crystal was used. This also allows the spectator to have a glance into the movement from the side as well. The case of the U20 Ultra-Skeleton Tourbillon is made of carbon-fiber and titanium. Due to the above mentioned materials used in the watch it feels so light on the wrist it’s almost scary. The 42mm case is a perfect size with 30m of water resistant. The U20 has 90 hours of power reserve.

The flying tourbillon is the icing on the cake. Flying means it does not need a supporting case on the upper side. This also adds to the transparency of the watch making the tourbillon visible from more angles. The price of the Angelus U20 is set to CHF 66.200 Swiss Francs. 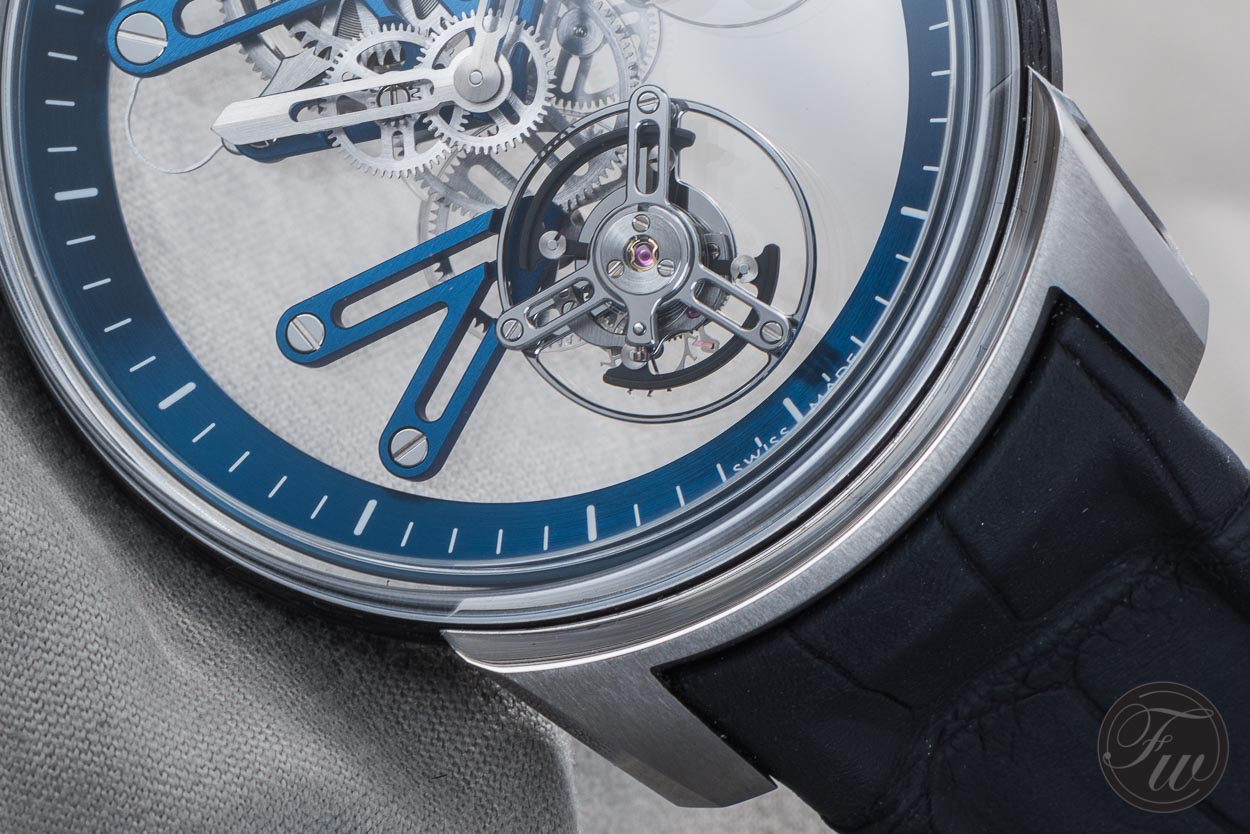 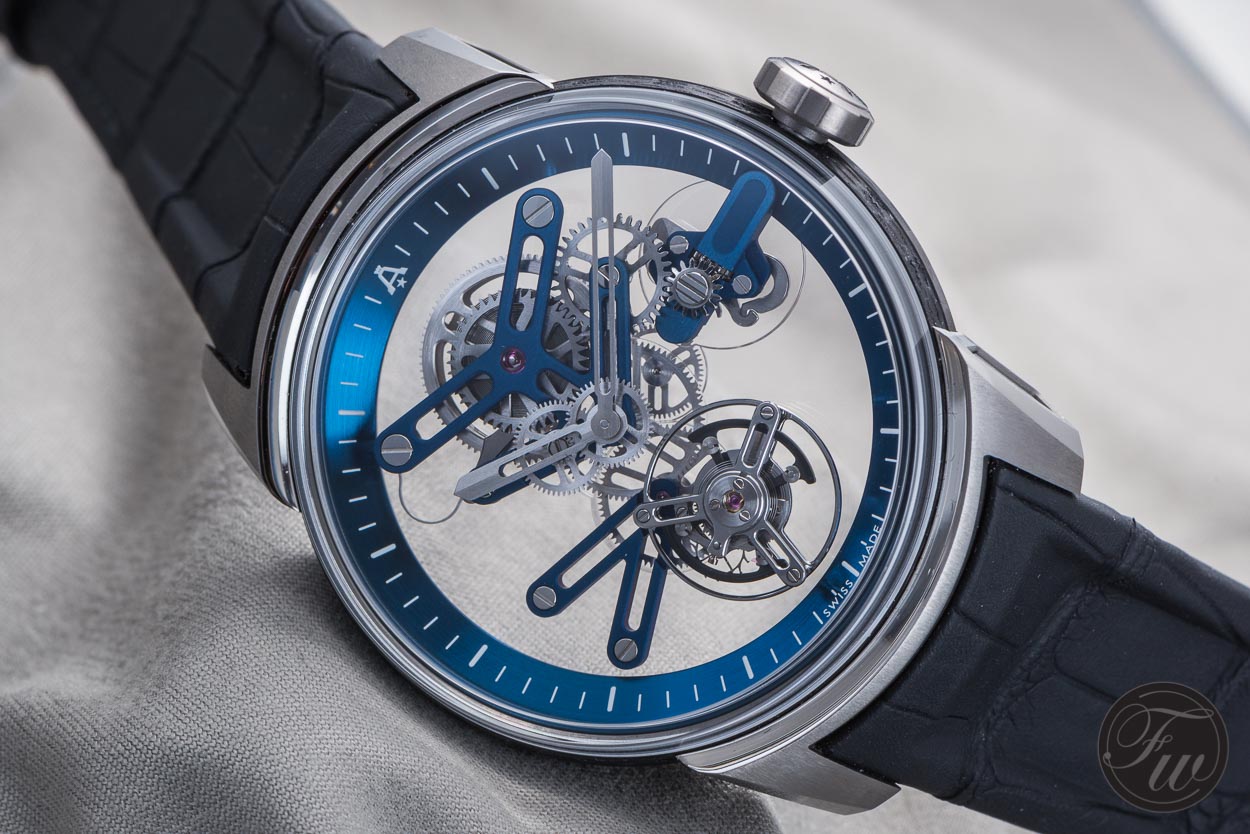 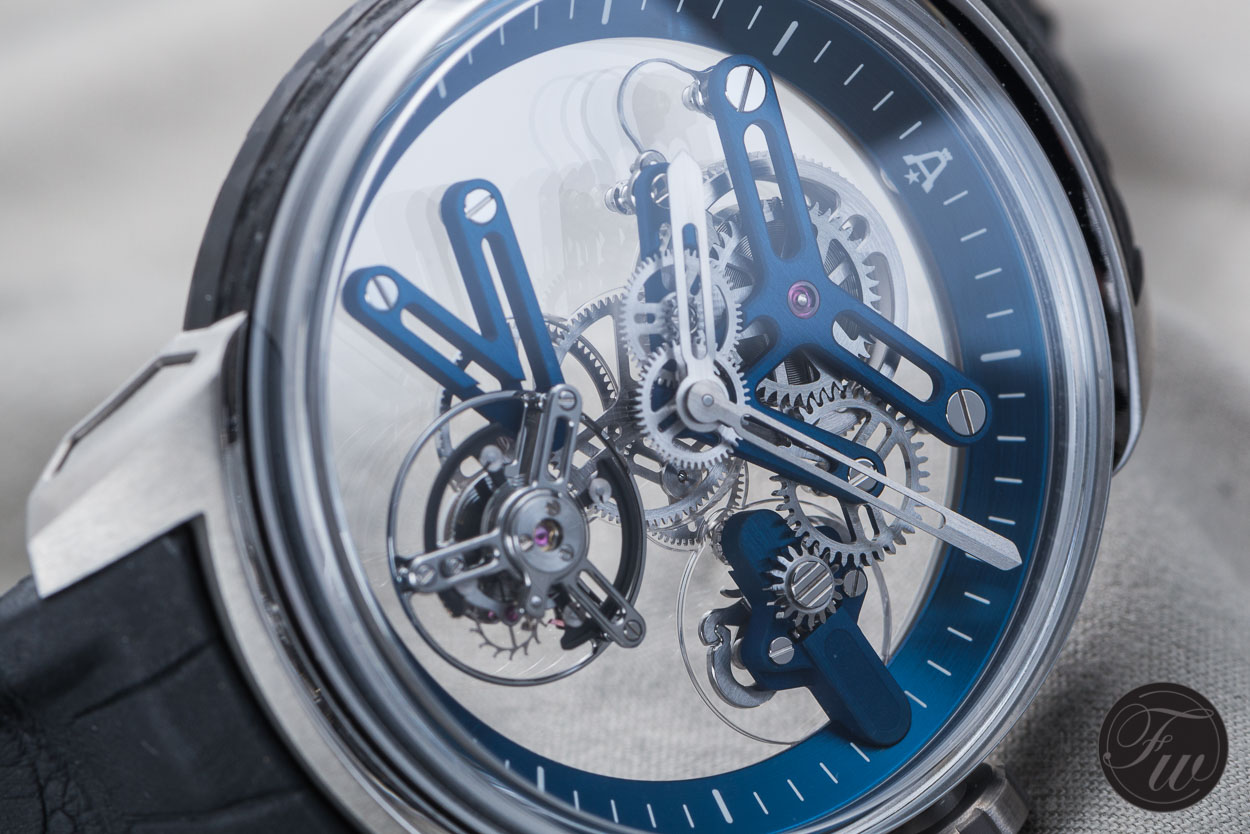 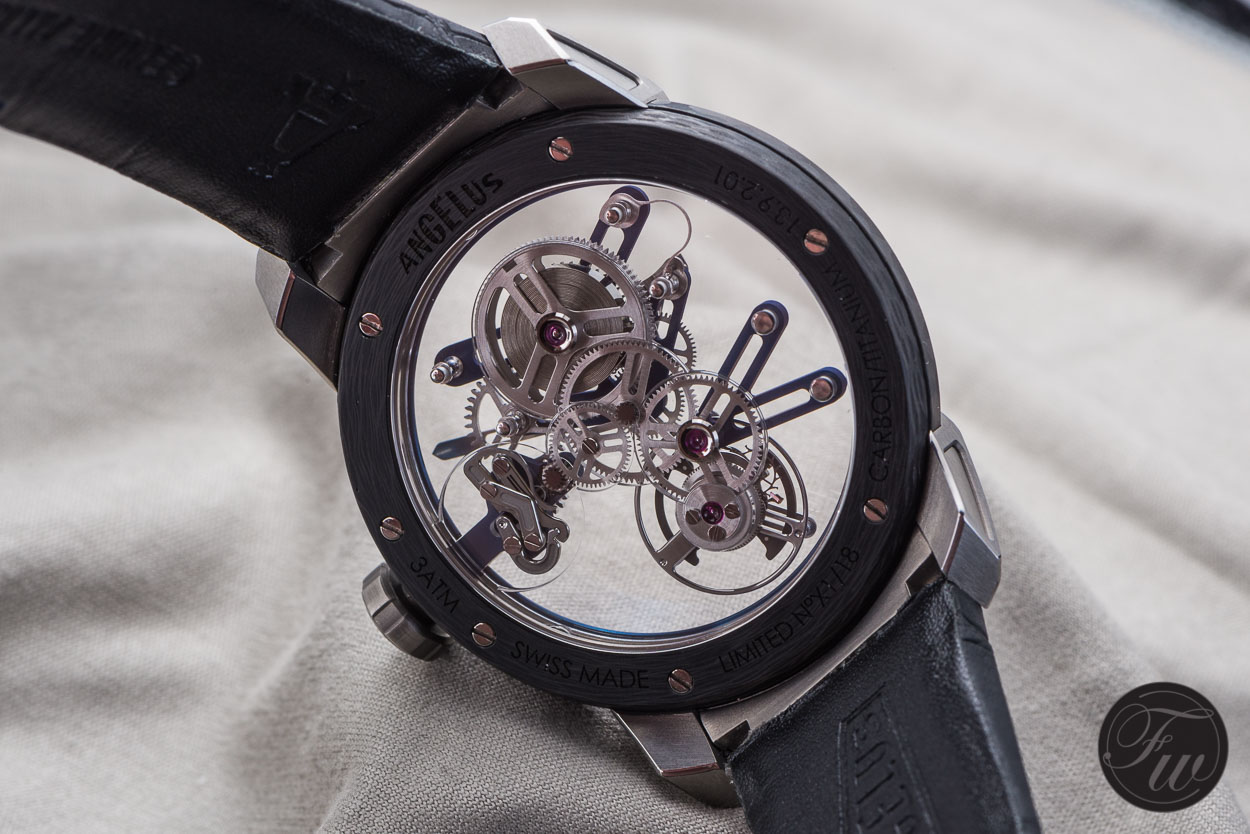 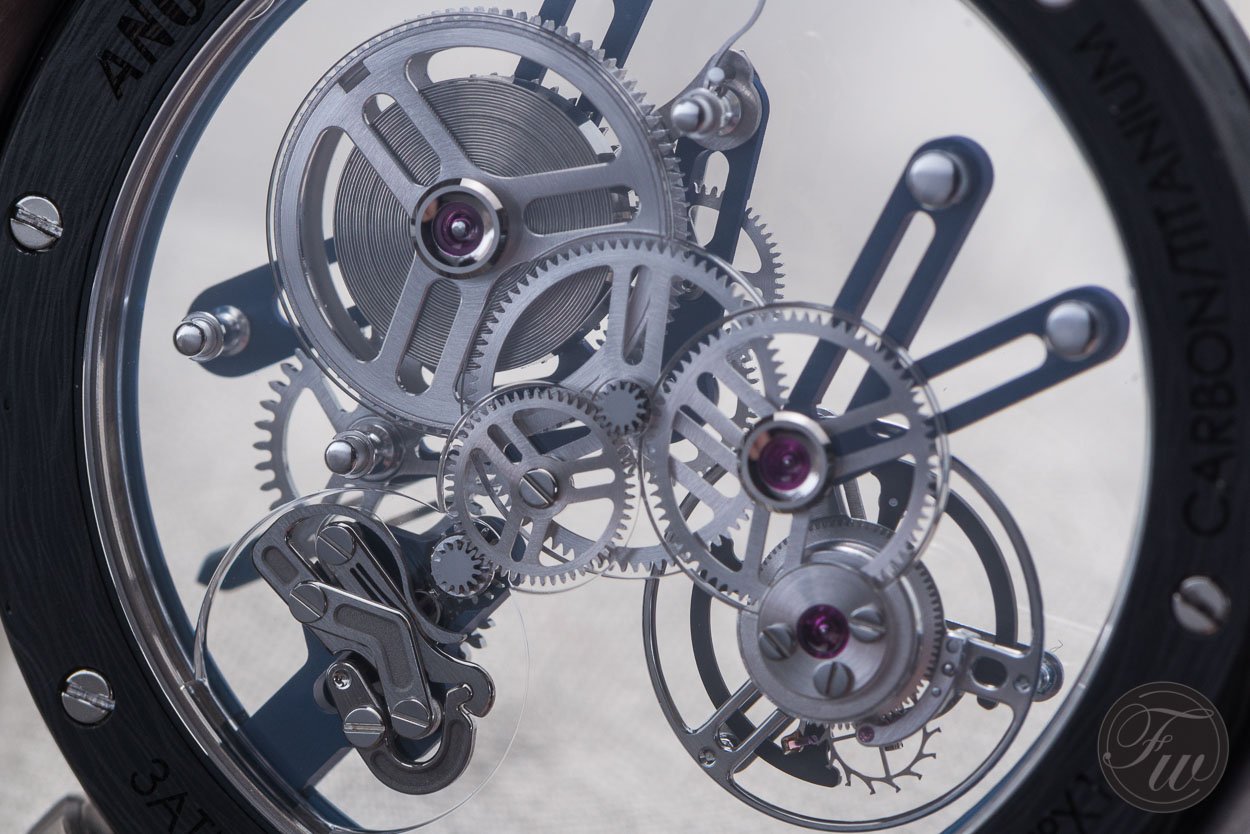 The second watch we had a chance to see at Angelus has even more horological complications than the U20. The idea behind this watch was something Angelus was always known for; being world’s first in – combining – complications. Angelus released its Chronodato collection in 1942, which was the first serially manufactured chronograph with a calendar function in the world. So when the engineers and watchmakers at Angelus thought about creating a completely new in-house chronograph movement, they knew they had to come up with something exceptional. The U30 Tourbillon Rattrapante combines three complications: a tourbillon, a fly-back double column-wheel chronograph and a rattrapante (split-second). As you would expect from the brand they went a step further not only putting all these functions in a watch but also skeletonizing it in a way to create a three-dimensional, contemporary design. The caliber A-150 working inside this masterpiece is a 38-jeweled, self-winding tourbillon split-second chronograph movement with 45 hours of power reserve. Completely designed and manufactured in-house. At 3 you have the continuous second and at 8 the power reserve indicators. You find the tourbillon at 11 in an entirely non-magnetic cage that allows us to see as much as possible from the dial side. At 4 you see one of the two column wheels, which can be seen during operation. On the back at 3 you can find the second column wheel. If you are aware of how a fly-back and split-second work you know that it is extremely complicated horological process to achieve the combination of these two features, because there are 2 chronograph hands that need to be reset and restart instead of just 1 like you would have with a regular movement. This requires to be set, optimized and regulated by the master watchmaker during assembly of the movement to reach flawless and guaranteed operation. The size of the watch is a tad bit larger than contemporary at 47mm and 15mm in thickness. The case is made of grade 5 titanium with sapphire crystal with anti-reflective coating on the inside. The watch comes as a limited edition of 25 pieces. For all of this, you have to reach into your pocket and pull out CHF 55.600 Swiss Francs. 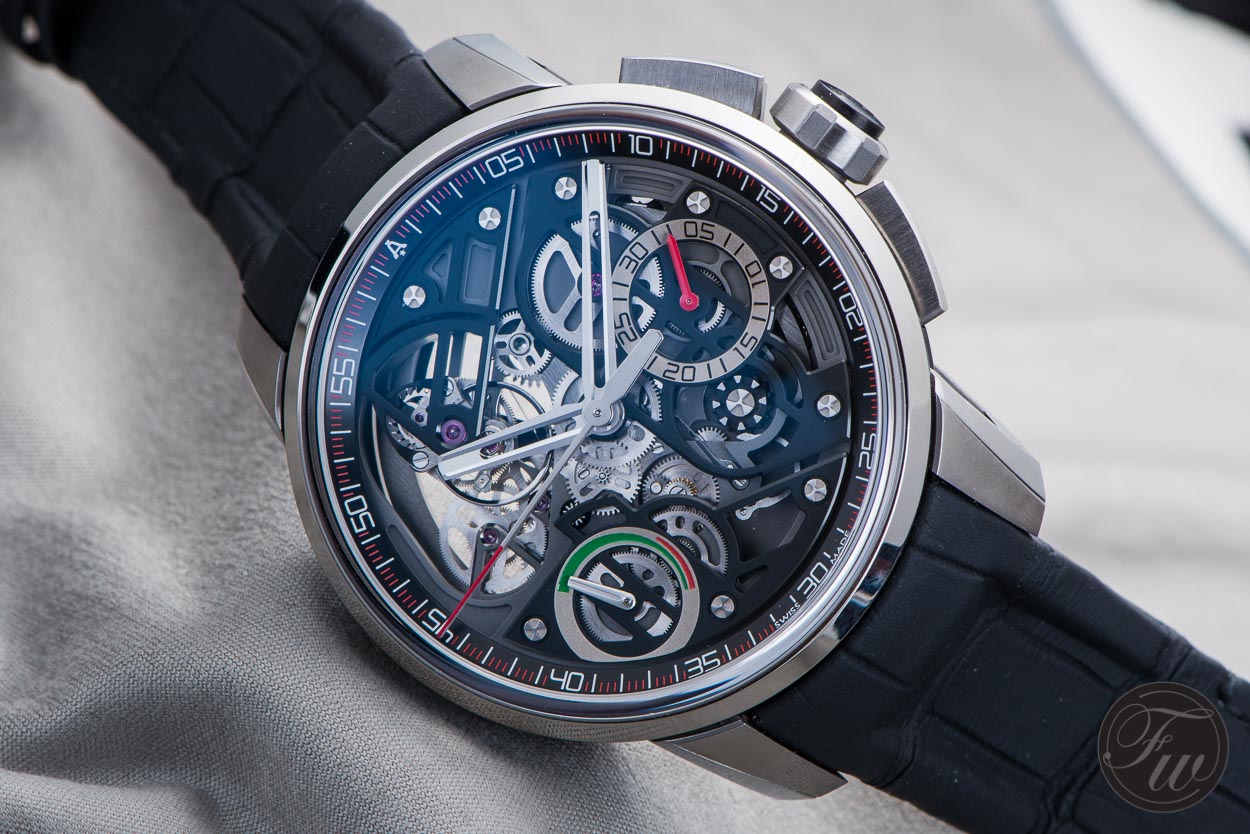 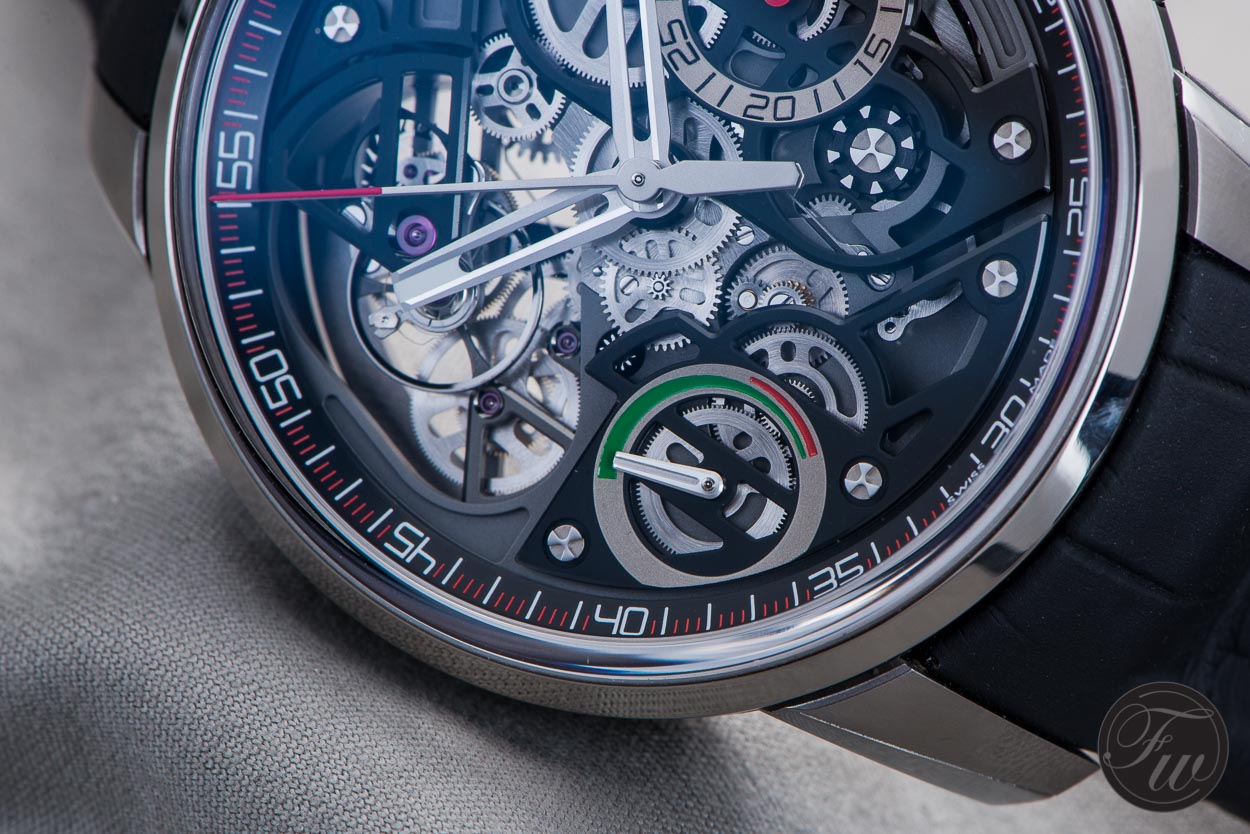 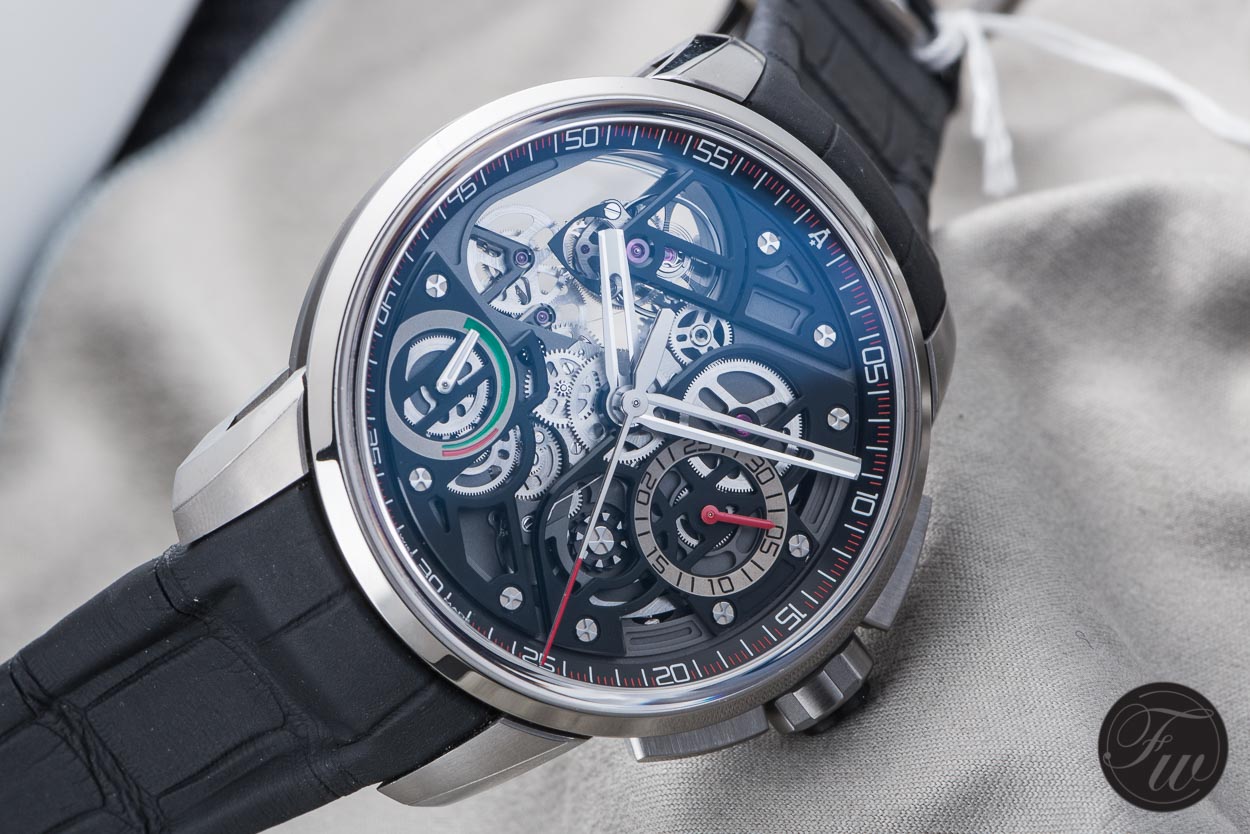 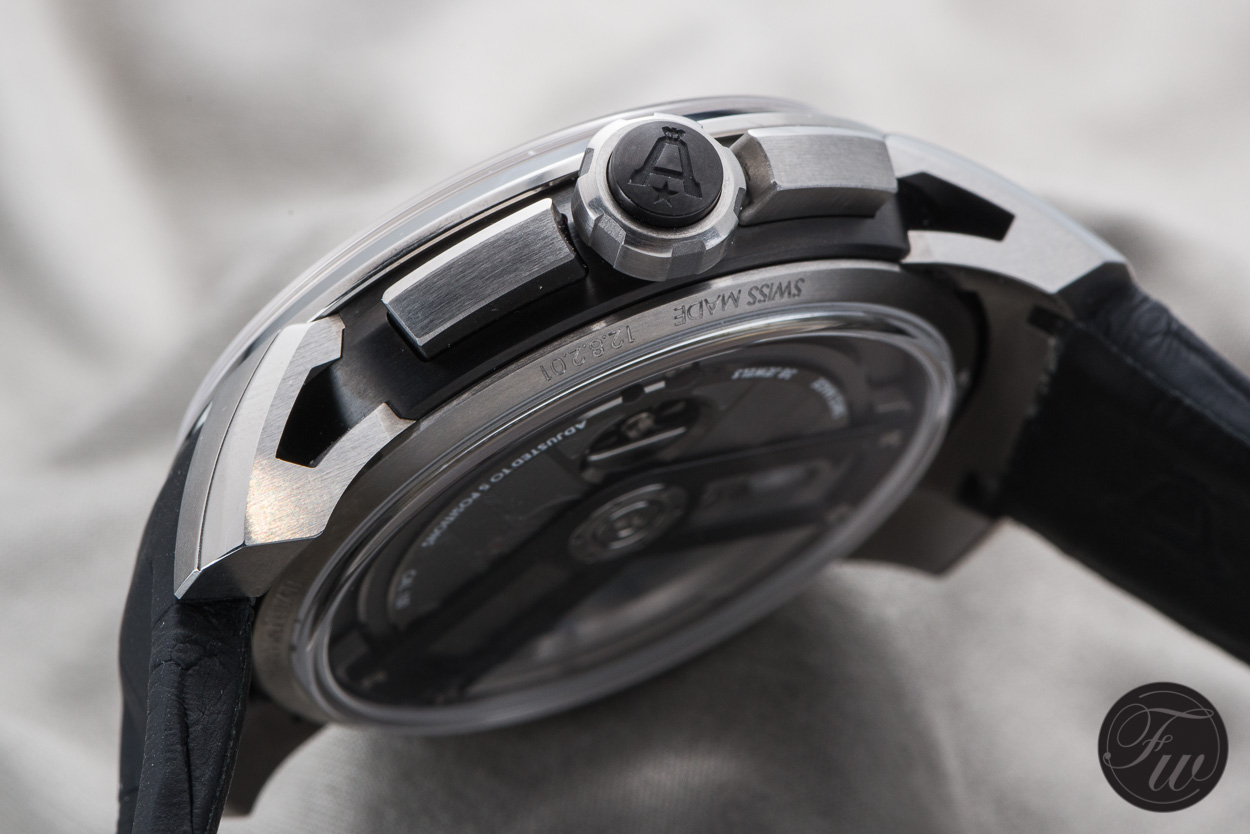 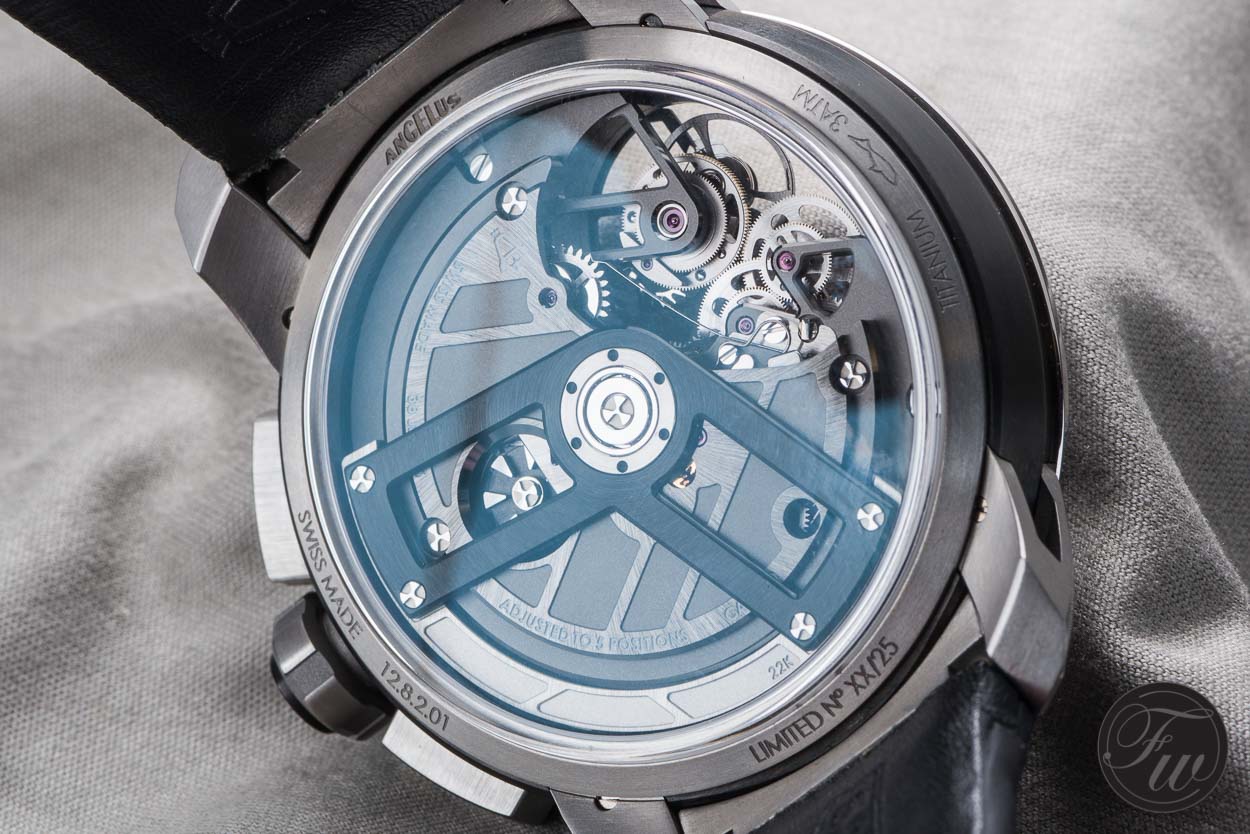 The last novelty from Angelus this year was yet another tourbillon, again skeletonized and “designed for ultimate performance” as the company puts it. Belonging to the same collection as the previous one (Urban Collection) this new watch features Angelus’ caliber A-300 in-house tourbillon movement. Inspired by the world’s best super cars the core idea was again structural optimization. They wanted to create a movement that can withstand impacts while keeping the skeletonized structure and the tourbillon, of course. To achieve this, the movement was designed with lower and upper plates instead of a base plate, where the wheels and barrels are in the middle, much like a sandwich. This not only allows you to have a better look at the movement and its design but also strengthens the watch and increases its resistance. The only complication we see is the one-minute flying tourbillon on this 23 jeweled mechanical hand winding movement with a Swiss lever escapement. It measures a bit smaller than the U20 or U30, with only 42mm in diamater and with a thickness of 10mm. The movement has a 60-hour power-reserve. The case is the same grade 5 titanium like in the previous cases with black coating on the back. The U40 Racing Tourbillon Skeleton features a box sapphire crystal with anti-reflective coating and a sapphire display case back. The dial layout is also pretty classical with a central minute and hour hand, the tourbillon at the 6 and the visible barrel at 1 o’clock. The hand tips can be white or red and the future buyer has the option to choose whichever color version he/she fancies. Due to the lightweight the watch almost feels invisible on the wrist, it is truly comfortable, the rubber strap is amazingly soft and fits perfectly. I wore the U40 for a little while and was amazed how unnoticeable it was and while it felt fragile, Sebastien assured me that the watch is built like a tank and is able to withstand a massive impact if necessary. I’m happy to say that this was the cheapest of all three novelties, priced at CHF 26.350 Swiss Francs. 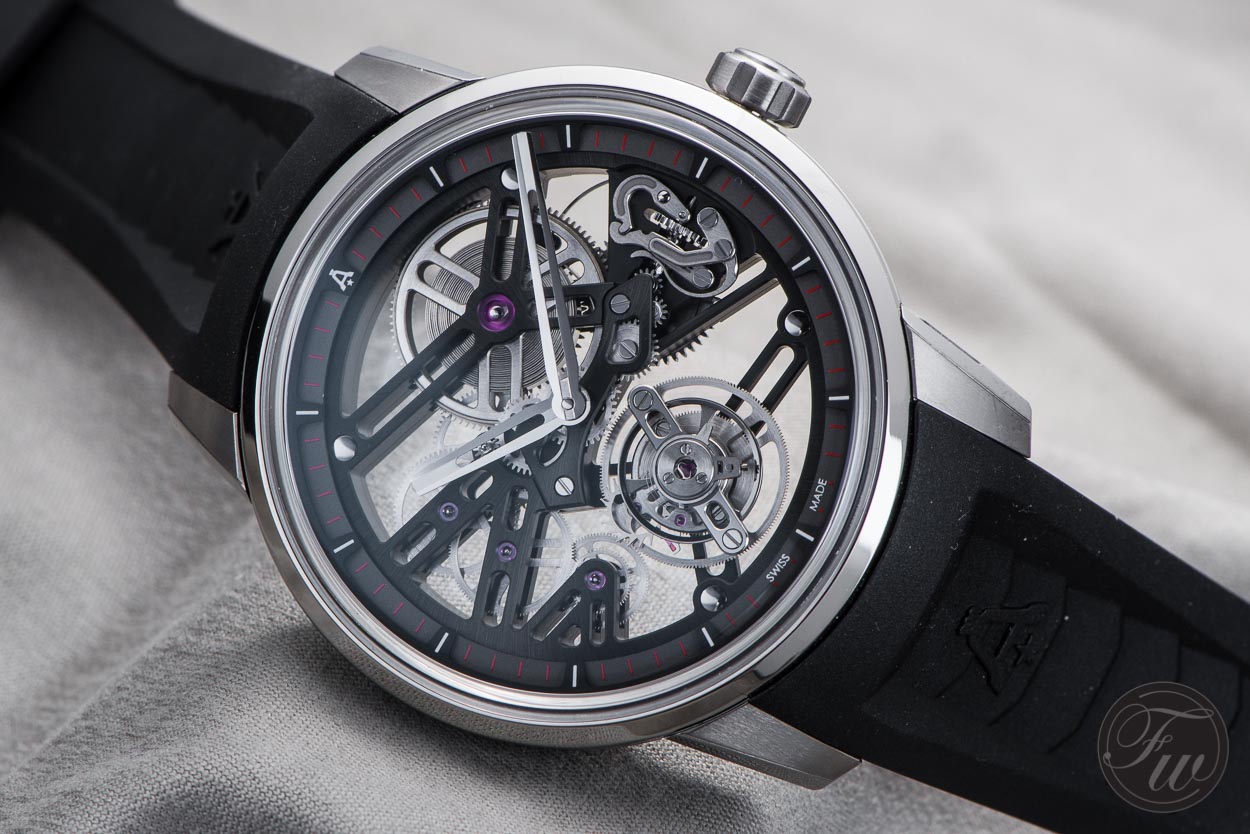 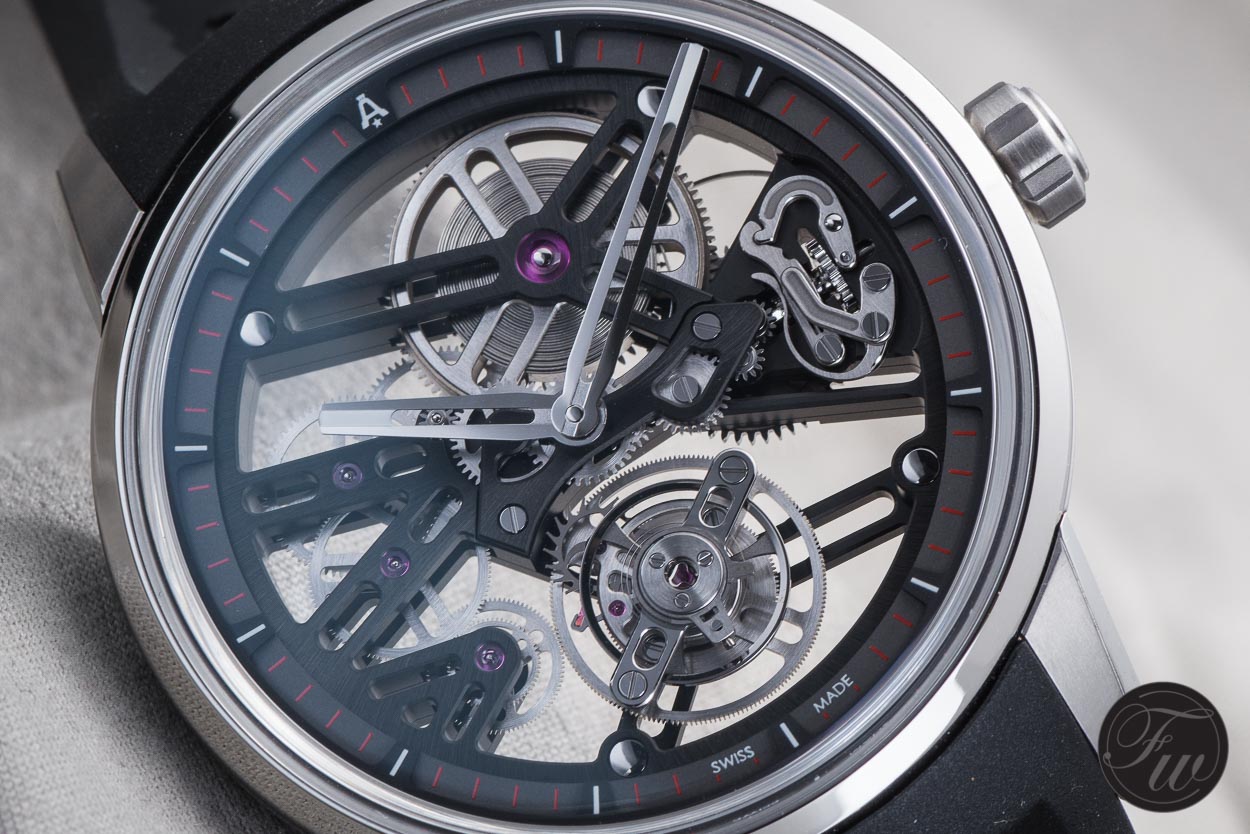 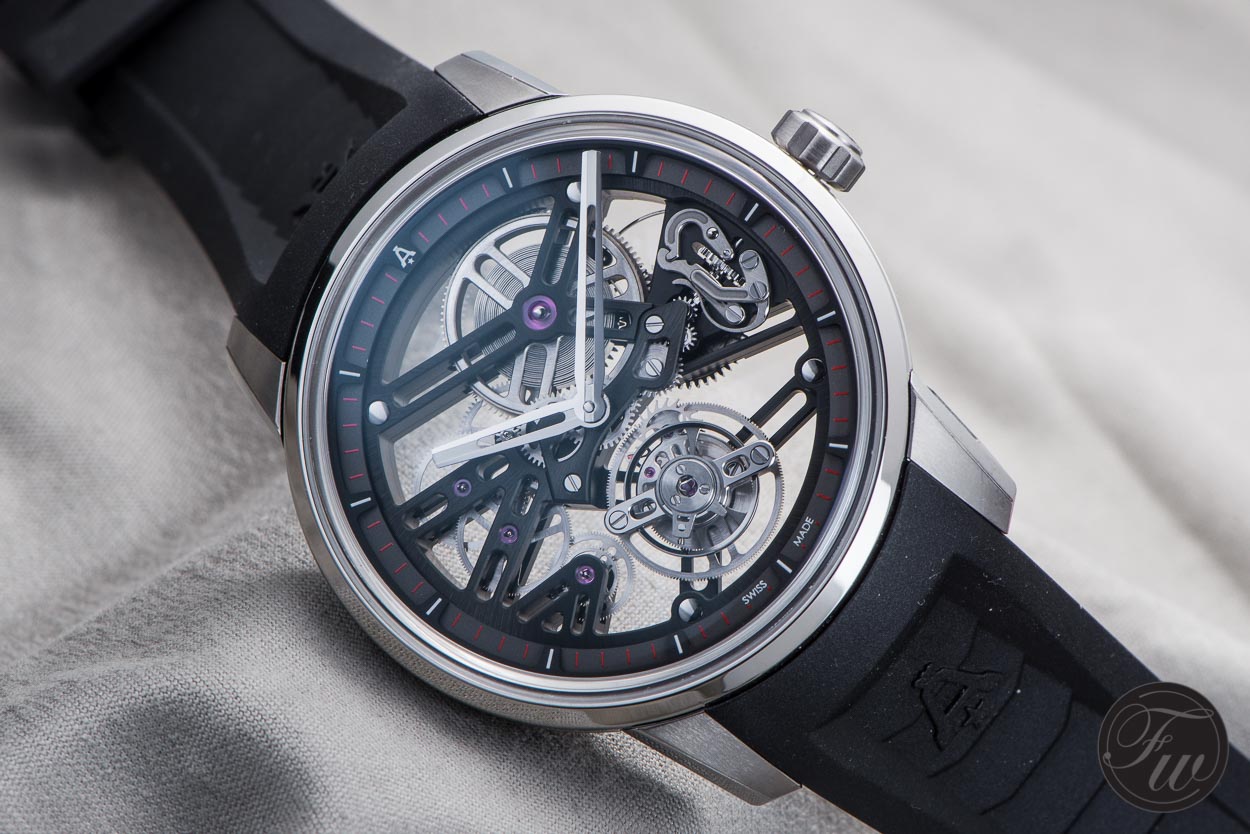 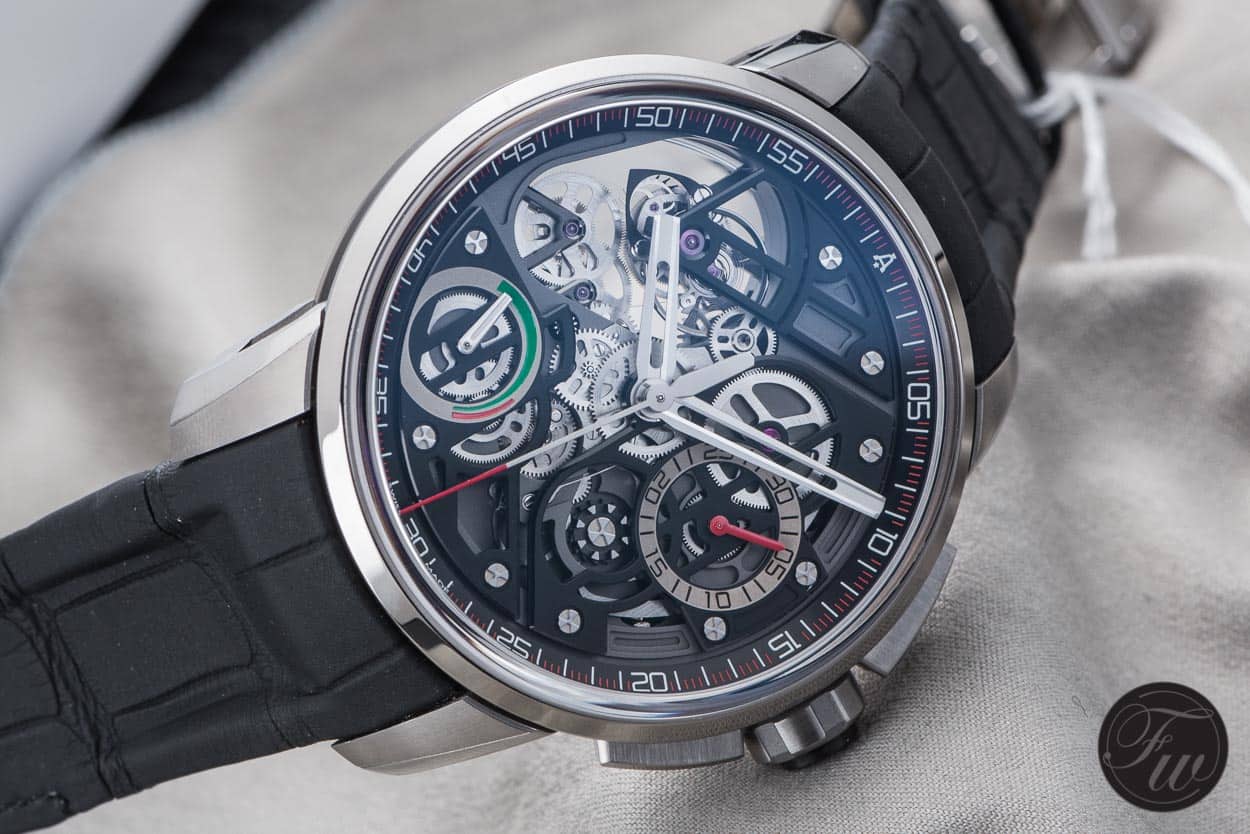 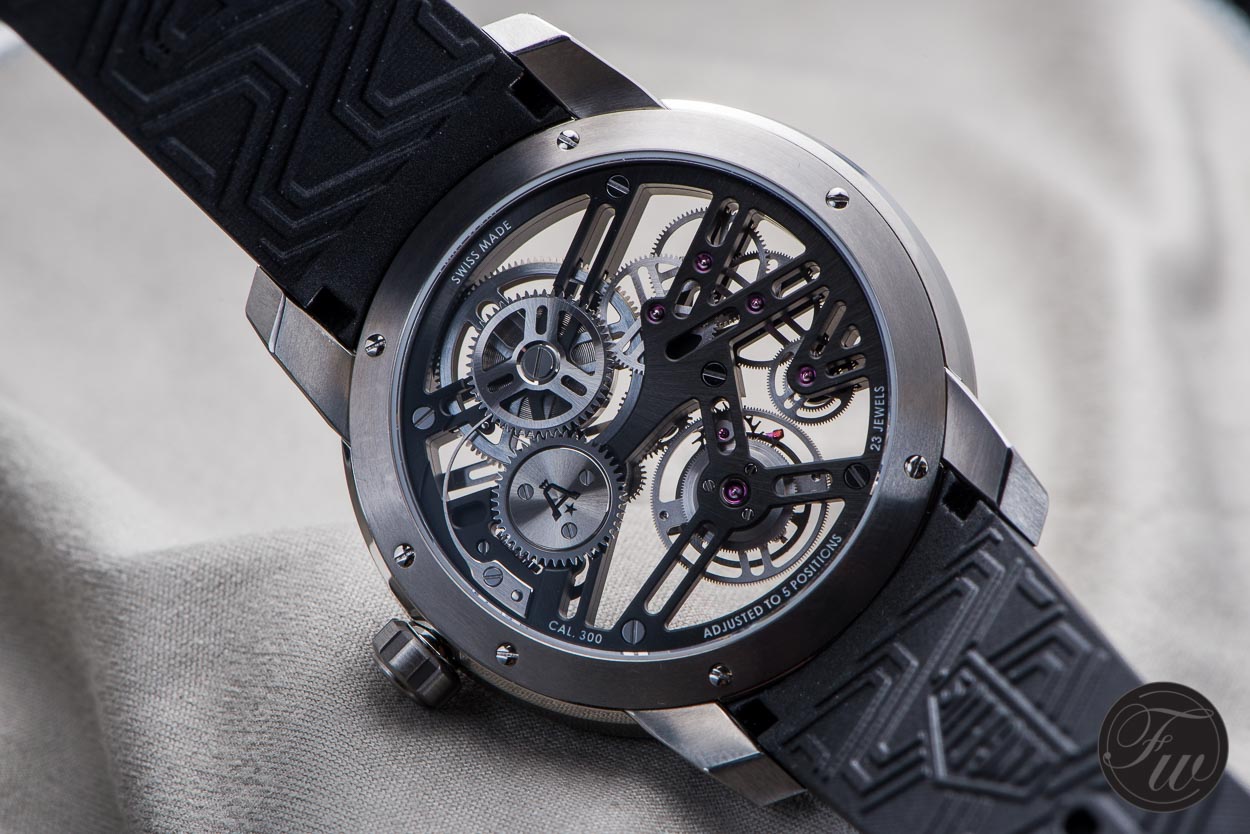 Angelus does not play in the same league as most of the brands we feature here on Fratello Watches, but reading about their watches, understanding how they work and why however put them into a totally different perspective for us every-day watch lovers. Recognizing the technicality behind the watches, appreciating the energy that was poured into creating these marvelous time pieces is something we should not forget to do even if we probably never own any of their watches. I can honestly say that the people at Angelus are truly passionate about what they are doing and I personally cannot wait to see what they have to offer for us next year. In the meantime stay tuned for some future Angelus content.

For further information on the brand and their watches please visit their website.