Not an homage to an existing watch model, but inspired by the cool cushion case diving watches of the sixties and seventies in general, the Aramar Walrus takes the brand in a different direction after a terrible start.

Aramar Watch Co. is an independent designer and producer of wristwatches founded in 2010 and based in The Netherlands. Above all, Aramar is the brainchild of true watch fanatics. It proved that passion doesn’t necessarily lead to designing, producing, and selling the right products. For instance, models like Transatlantic and Arctic Ocean (we deliberately don’t link here, and don’t even want you to look them up) almost made us decide not to cover anything Aramar at all. However, the recently-released Walrus seems to be a move in another direction and deserves to get attention. 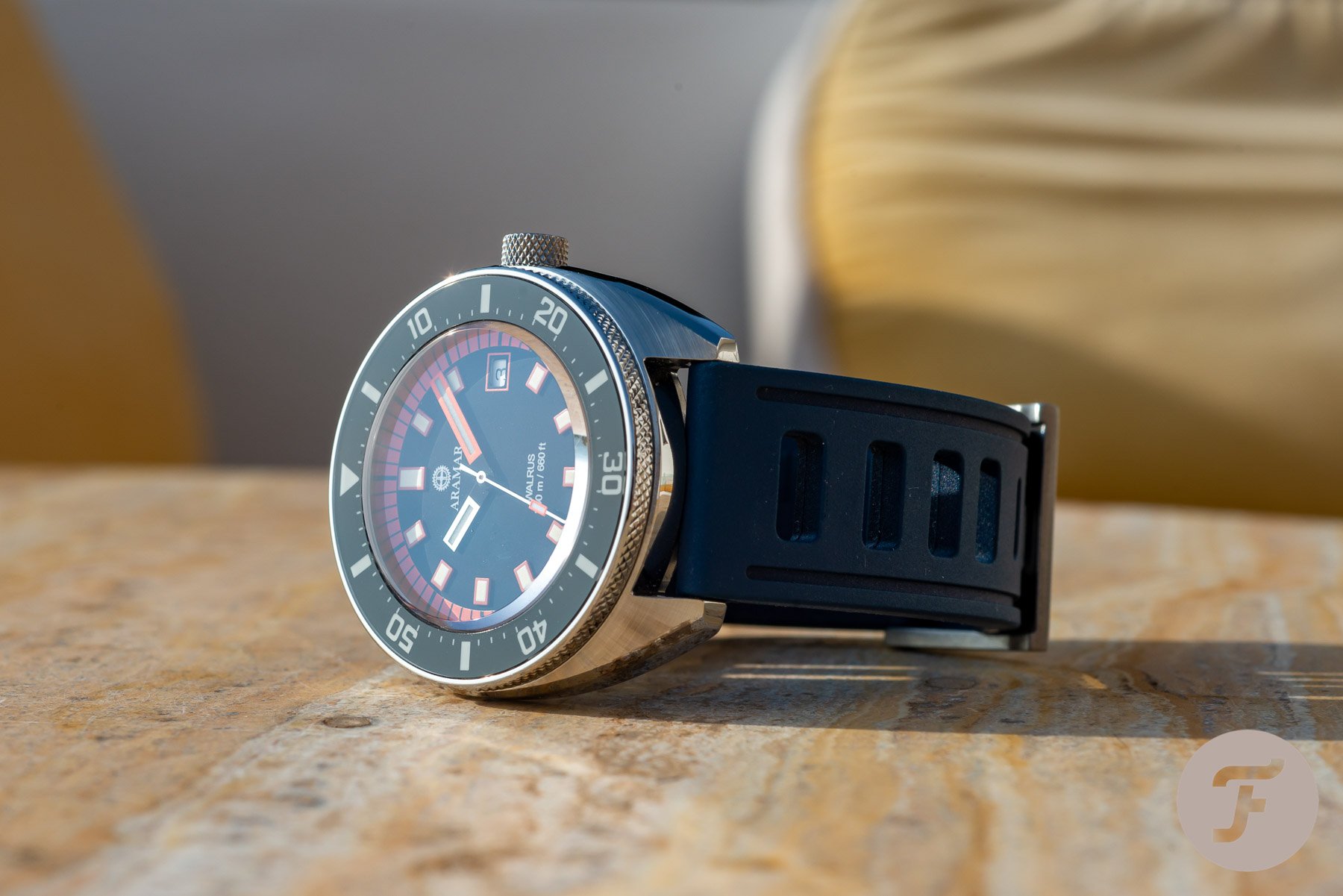 With the Walrus, Aramar decided to seek help from Kickstarter again. An earlier project, the Long Beach Racing Chronograph, brought almost 90 backers and over €25,000, so it made sense to roll the crowdfunding dice once more. We’ll get back to how that ended up, but let’s have a look at the watch first.

As said, the Walrus is a classic cushion-shaped dive watch, delivered on a shark-mesh bracelet as standard. It’ll be available in two color variations. One with a black dial, black bezel, and orange minute track, and one with an all metallic sunburst blue dial and blue bezel. As extra, there will be rubber straps available, a black one for the black-dialed version, and a blue one for the blue-dialed watch. We got prototypes from both watches in for review. However, I will concentrate on my favorite — the black and orange version.

Aside from the different dial colors, the hands for both versions differ as well. Specifically, the minute hand. This hand on the black and orange-dialed watch is orange painted with a C3 Luminova luminous inlay. All other hands (including the minute hand on the blue version as well) are made from unpainted metal, with the same luminescent inlay, though. 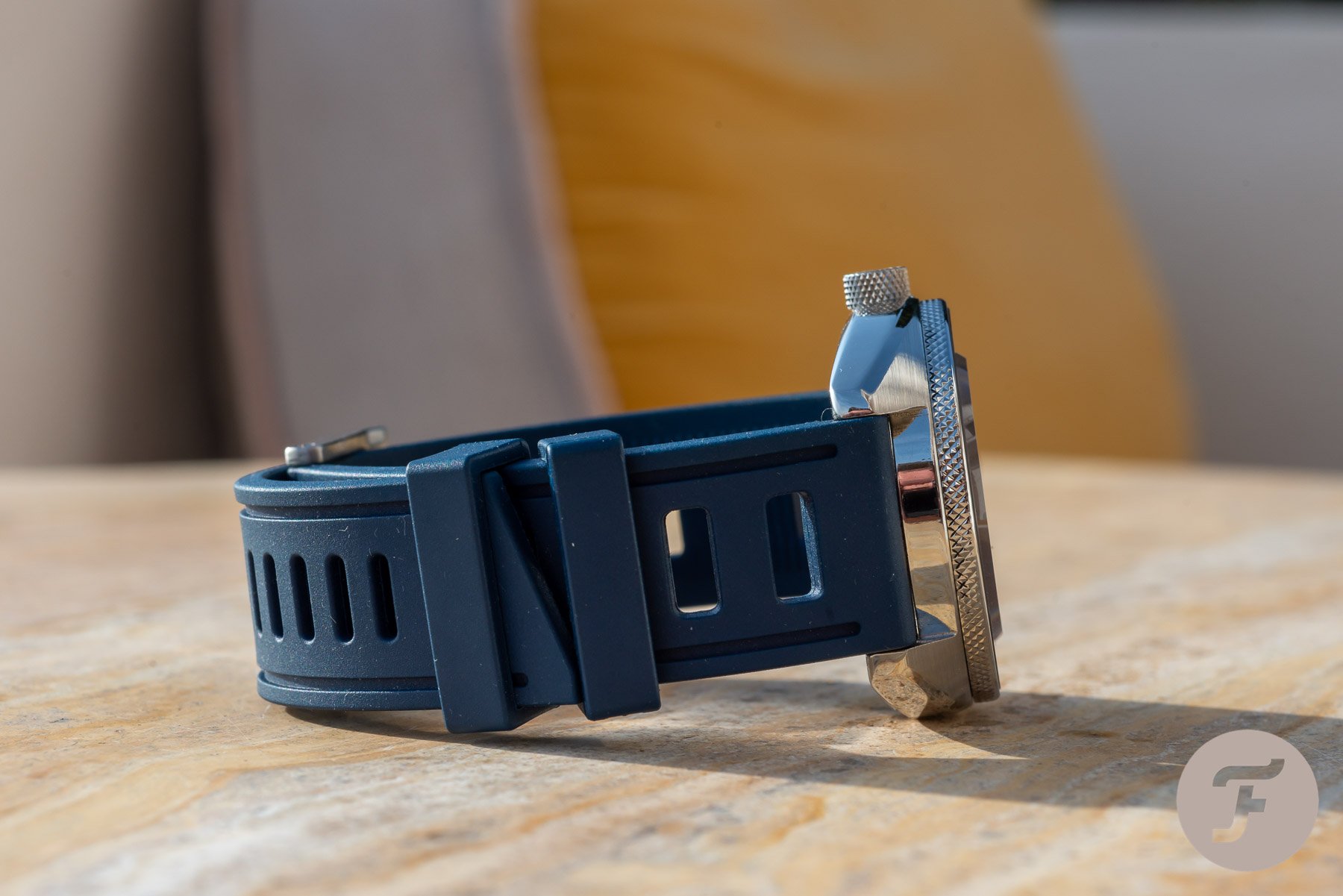 As a diver, I can very much appreciate the minute hand being orange, or at least differently colored from the hour and seconds hand. Below the surface, looking through damp diving goggles, things get blurry quickly, and any easy differentiation between the hands is very welcome. 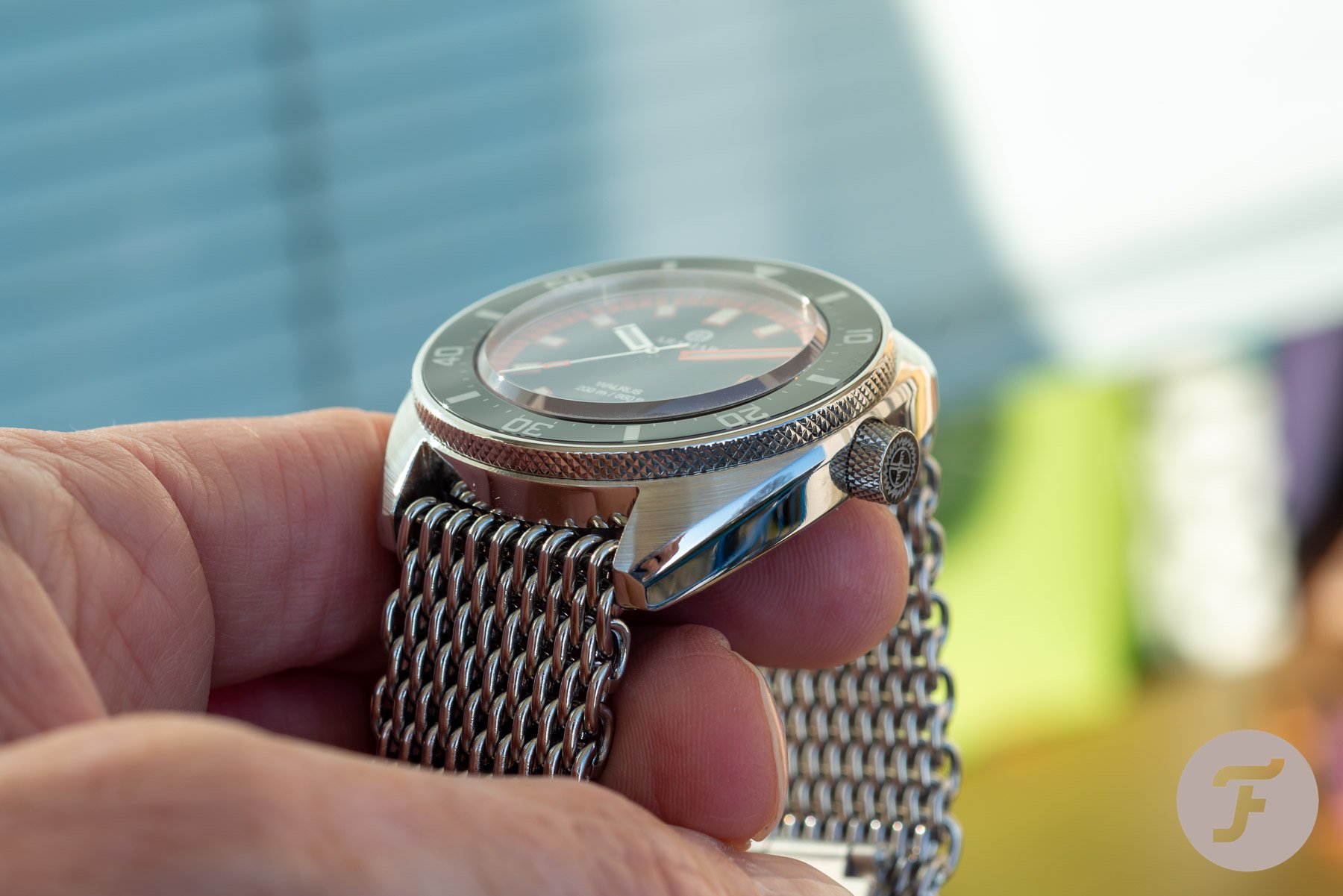 Standard equipment for the Aramar Walrus will be a heavy, so-called shark-mesh bracelet. I love these bracelets and find them certainly adequate, obviously, for diving watches. The watch of my choice — the black and orange one — was equipped with this bracelet, while the blue-dialed watch was fitted with the optional blue rubber strap. A perfect situation, what could go wrong?

Well, as it turns out, a whole lot. Astoundingly, it is not possible to resize the bracelet, apart from the fine-adjustment offered by the clasp. Unfortunately, the bracelet was way too large for my almost 18cm wrist. Bummer. So I had to change the blue rubber strap from the other watch to wear the watch I liked most. And I have to be honest, that went quite well, even in terms of color. Aramar told us, however, that with the final version of the watch, the mesh bracelet will be shorter and suitable for an approximate 18cm wrist.

…what else is good?

Well, a lot. For instance, we didn’t mention the crystal and the movement yet.

How about that crystal? Made of sapphire and super thick one, it rises quite a bit above the bezel, and the faceted edge gives it a cool look. I don’t think such a thick sapphire crystal was necessary to get the 20 bar pressure rating, but it suits the watch anyhow. And since it’s sapphire, there’s no need to worry about it picking up little scratches along the way (although chipping it is always a possibility, of course). The crystal has an anti-reflective coating on the inside. 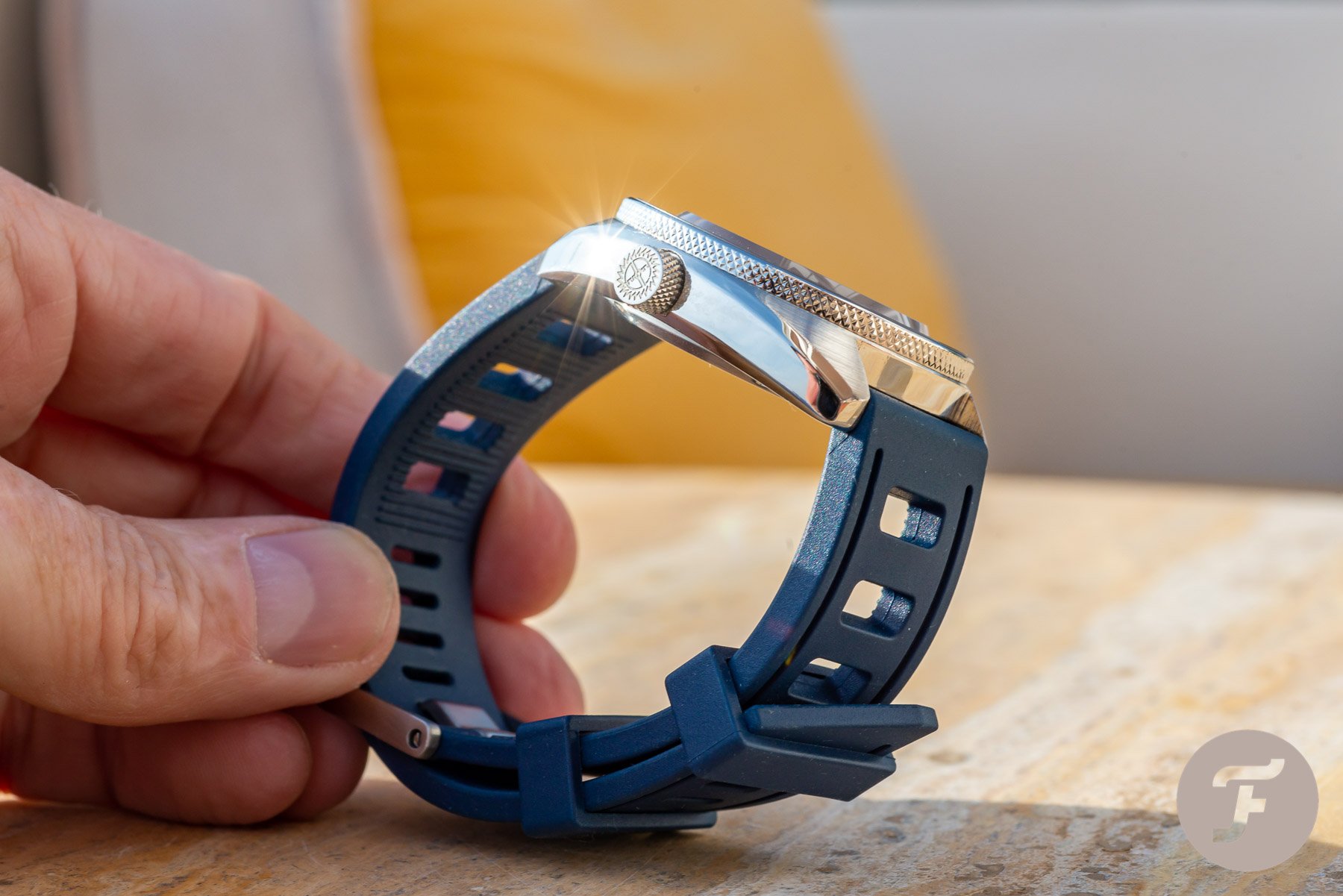 The crown is a custom-designed, 6,5mm diameter screw-down model located at the 3 o’clock position. When screwed down against the case, it ensures the watch to be waterproof up to 200 meters.

Like the crown, the unidirectional bezel has a diamond knurled pattern on its side, providing a good grip. It can be turned anti-clockwise, with, oddly enough, 84 clicks for one rotation. That means seven clicks per five minutes. I’ve no idea where that came from.

To recreate the classic look of a vintage Bakelite bezel, Aramar opted to use a bezel inlay made out of sapphire. With this material, it’s possible to create a visual effect almost the same as Bakelite, yet with much better scratch resistance.

Although the Walrus is produced in China, Aramar Watch Co. choose for the reliability of an authentic Swiss Made workhorse movement, the ETA 2824-2. The standard grade ETA 2824-2 is a self-winding movement, with a power reserve of up to 42 hours. It has 25 jewels and uses ETA’s own Etachron regulator system with Etachoc shock absorber. It runs at 28,800vph (4Hz). The movement sports a hacking function, meaning you can set the watch to the second, and it features a quick-set date too. 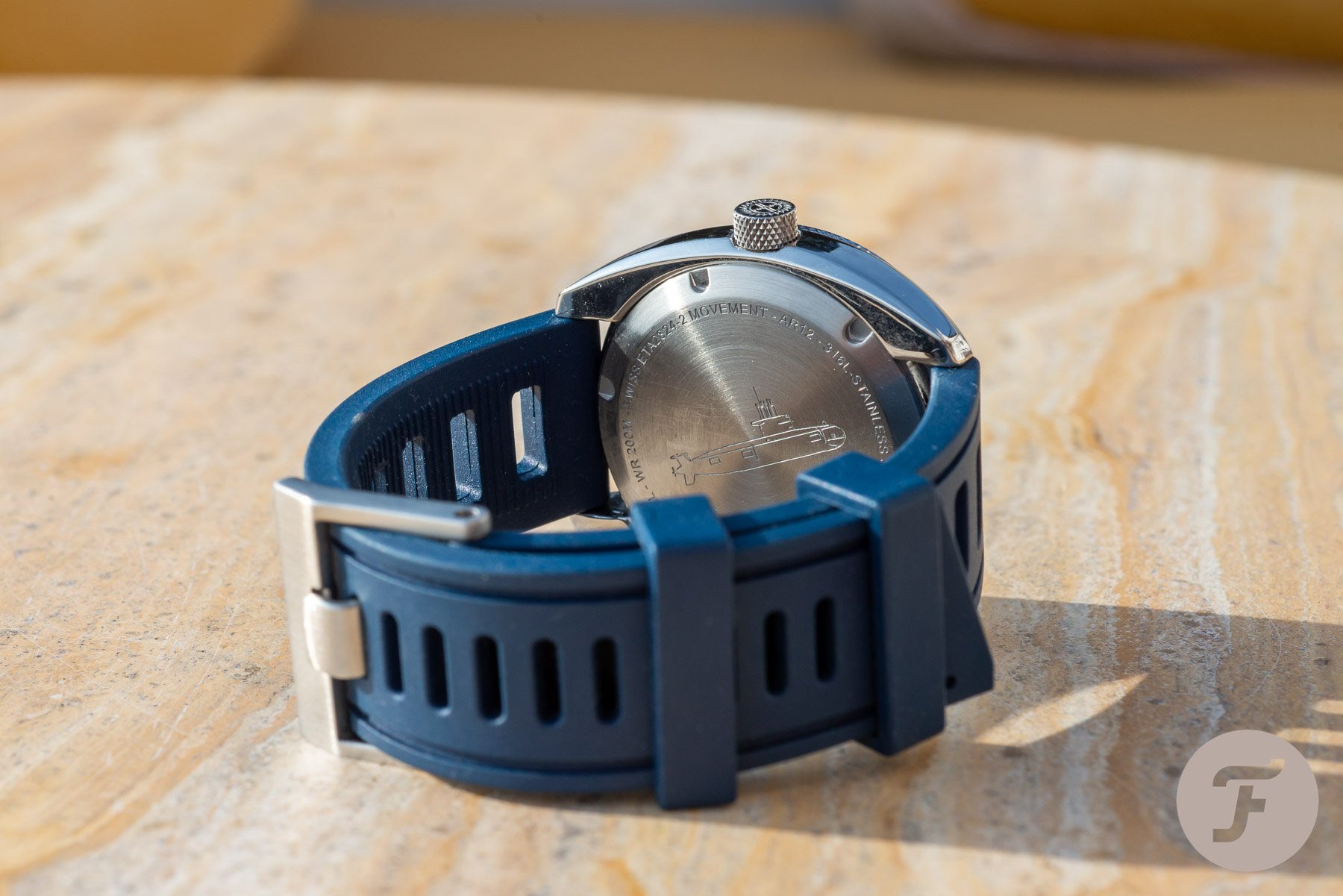 Unless you happen to be a watchmaker (or an enthusiastic amateur), it’s unlikely you’ll ever see the movement, given that it’s hidden behind a solid case back. Given the added robustness, this is, in my opinion, an appropriate choice for a divers watch. The case back is engraved with a graphic of the Dutch Walrus class Submarine — the watch’s namesake.

Aramar got this one right. Right size, good looks, sapphire crystal, Swiss movement, quality feel. There is nothing wrong with this at all. Probably a non-sizable mesh bracelet is a bit weird, but hey. For €399 it’s hard to complain. One minor thing could be that the brand name Aramar got a bit of a bad vibe because of their earlier models. For this watch, it wouldn’t have been a bad idea to use a different name. Although I think this watch should be judged by what it is, the name on the dial is hardly essential or exciting. 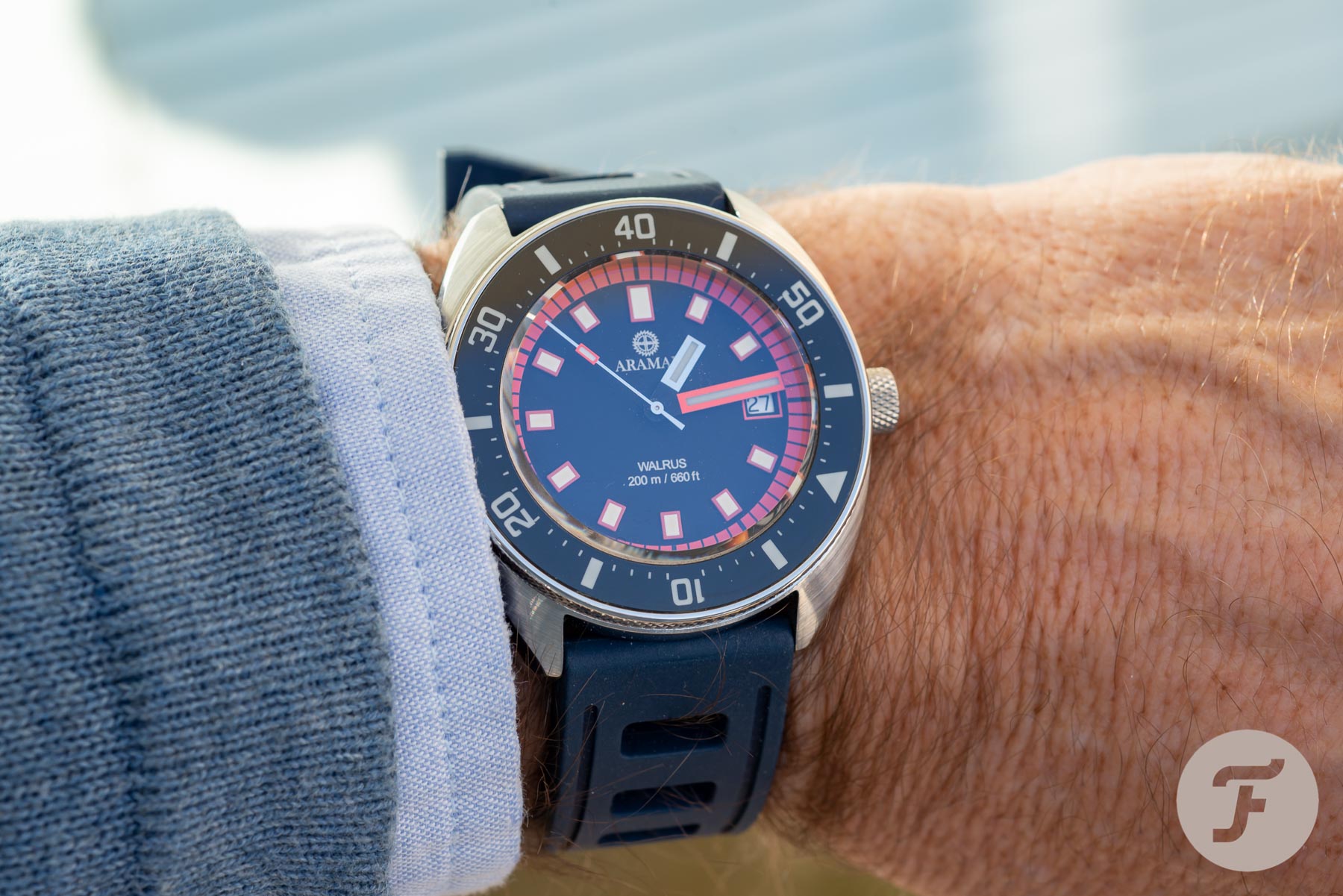 So what happened to the Kickstarter campaign for the Walrus? Well, that failed. A paltry 18 backers combined to pledge just half of the €30,000 goal. So, what happens next?

Aramar just told us that they plow ahead with an off-Kickstarter pre-order session themselves. The offer will be for the watch with mesh bracelet and the rubber strap, for a price of € 399. The deadline is that at least 20 watches have to be sold before the 1st of March 2020, otherwise the project will be canceled definitively. So here’s your last chance to get one: Aramar Walrus Pre-Order

And just in case the Walrus goes extinct, you might want to look for other options. As the design of this watch was inspired by vintage diving watches like the Edox Hydro Sub, Enicar Star Diver, and Zodiac Sea Wolf, you could always chase down one of the originals. But a real vintage watch is a different product than a modern interpretation of it, and certainly needs different care when used daily. Let alone when used during diving or other water involved activities. 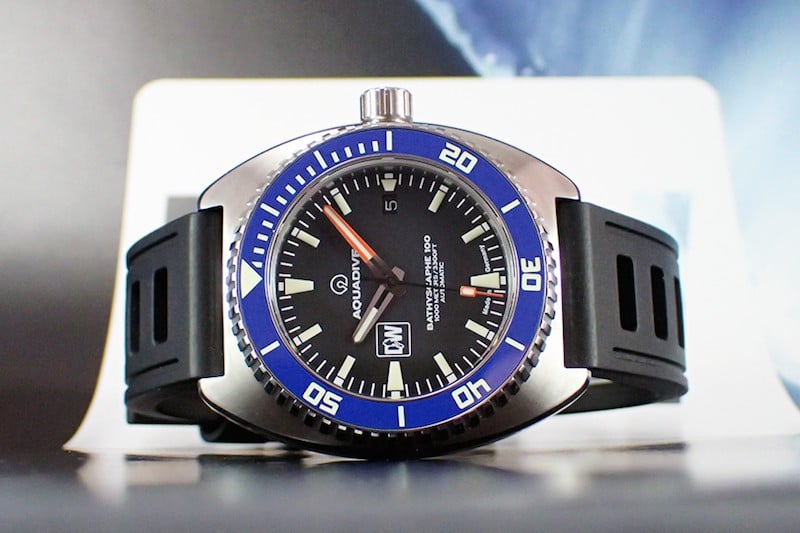 So if we look for a current-day produced watch with more or less the same feeling, one could think of the Aquadive Bathyscaphe 100. At first sight, the Aquadive might look more or less equal, but it has a totally different depth rating of 1,000 meters instead of 200. The construction of the watch is very different, resulting in a justifiably different price point — around €2,000. 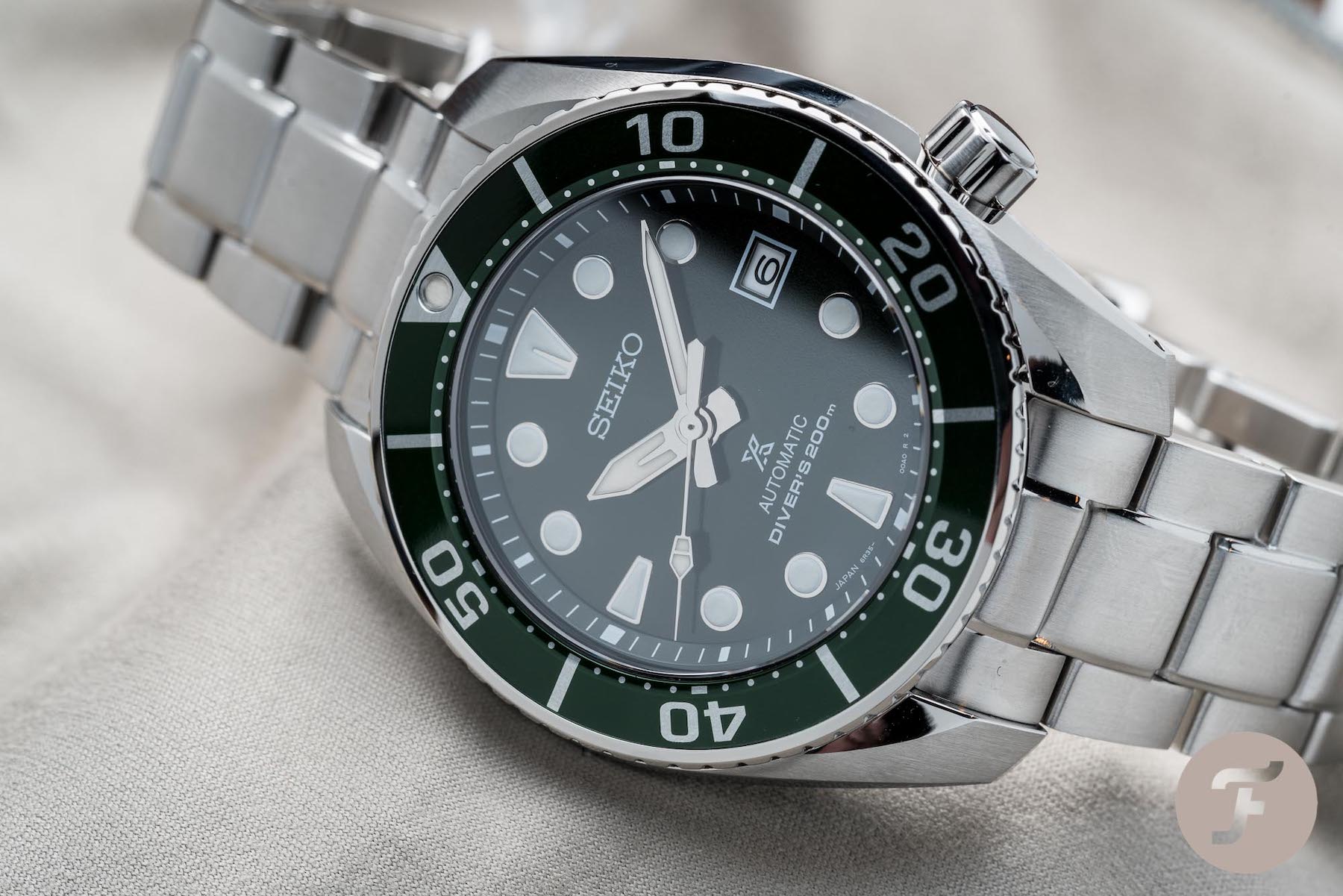 A closer alternative comes from the East. The Seiko SPB101J1 ‘New Sumo’ has a depth rating of 200 meters as well, and boasts a sapphire crystal. It houses one of Seiko‘s most modern automatic calibers, the 6R35, which provides hand winding, a hacking function, and a quick-set date. Its price is €830, which is two times that of the Aramar Walrus, but the stainless steel bracelet is sizable, meaning that any customer (not just the thick-wristed) can wear it comfortably.