We could say that the people at Arnold & Son are quite obsessed with the moonphase complication. No wonder — their brand name was inspired by John Arnold, an 18th-century watchmaker famous for his marine chronometers. Arnold & Son’s Luna Magna (“Great Moon”) collection pays tribute to the celestial body that was used to navigate the vast seas back then. After last year’s dark blue version, the brand now introduces the Luna Magna Ultimate II, a lagoon-blue iteration of its impressive bejeweled 3D moonphase.

To tell you the truth, I haven’t seen this watch in person. I’m saying this because, most of the time, the pictures and the real-life experience of a watch are quite different. But in the case of the Arnold & Son Luna Magna Ultimate II, I think this difference will be even more drastic than it usually is. I have a feeling that this watch will absolutely steal the show in person with its baguette-diamond-set case, ruthenium crystals on the dial, and the pavé-set 3D moonphase. Let’s get into the details of this visually and technically impressive timepiece. 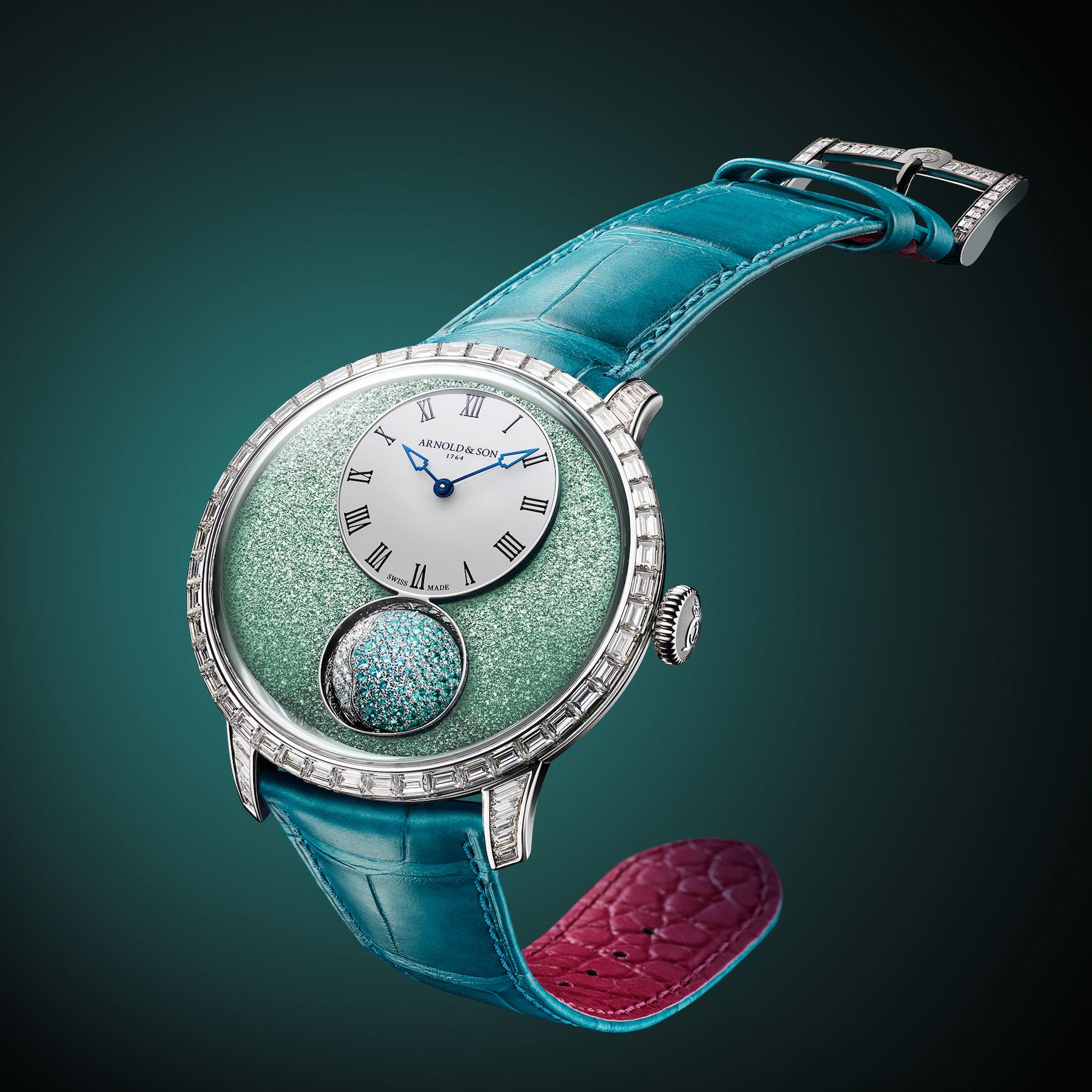 And yes, let’s start with that beautiful 3D moonphase. First of all, it’s visible from both the front and the back of the watch. That gives you the perfect opportunity to behold the 161 pavé-set diamonds that were used for the moon… Oh, and the 161 pavé-set Paraiba tourmalines that represent the shadow. But those decorations aren’t the only impressive feature. This is also one of the most accurate moonphase complications ever made.

If you didn’t know, a complete lunar cycle takes 29 days, 12 hours, 44 minutes, and 2.8 seconds. The movement engineers at Arnold & Son have done their very best to replicate this exact cycle. This means that you’ll only have to correct the moonphase once every 122 years. This does, however, imply that you manually wind the watch every time it’s running low on its 90-hour power reserve. When you do need to set the moonphase, you can do so by using the secondary display on the back for more accurate adjustment. And while we’re looking at the back of the watch, let’s talk about that beautiful movement. 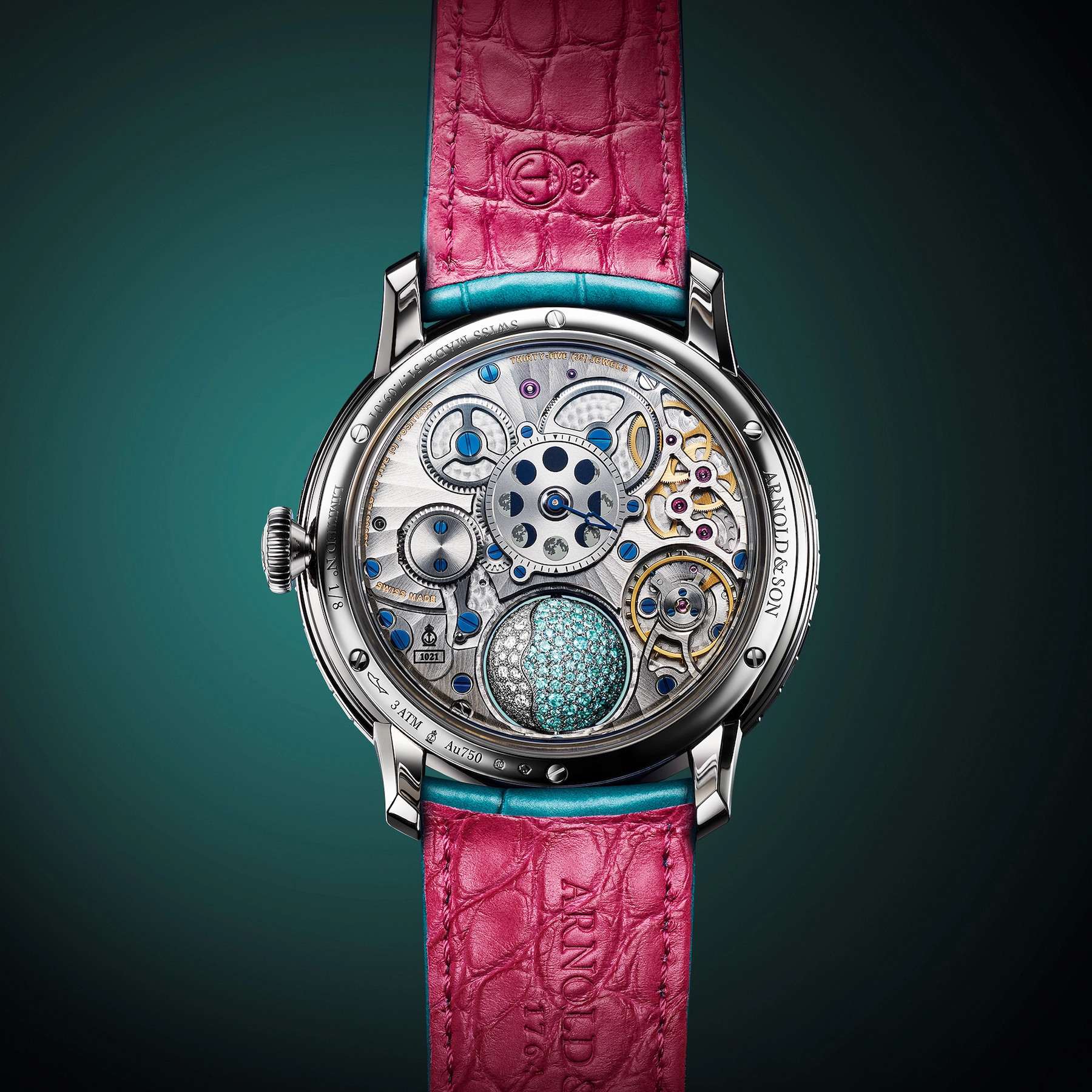 As mentioned, the Luna Magna Ultimate II is powered by a manually wound movement. The A&S1021 caliber is developed, produced, assembled, and adjusted at the manufacture in La Chaux-de-Fonds. And if you thought the 3D moonphase was the only beauty to behold, wait until you see that movement through the sapphire case back. Arnold & Son made sure that the back of the watch is at least as impressive as the front.

The movement has been beautifully finished, starting with a circular-grained mainplate. We also see Côtes de Genève on the bridges and a circular satin finish on the chamfered wheels and moonphase indicator. Topping it all off are blued, chamfered, and polished screws. Go ahead, take your time to indulge yourself with that outstanding finishing. But make sure to leave some time so I can tell you all about the dial of the Luna Magna Ultimate II. 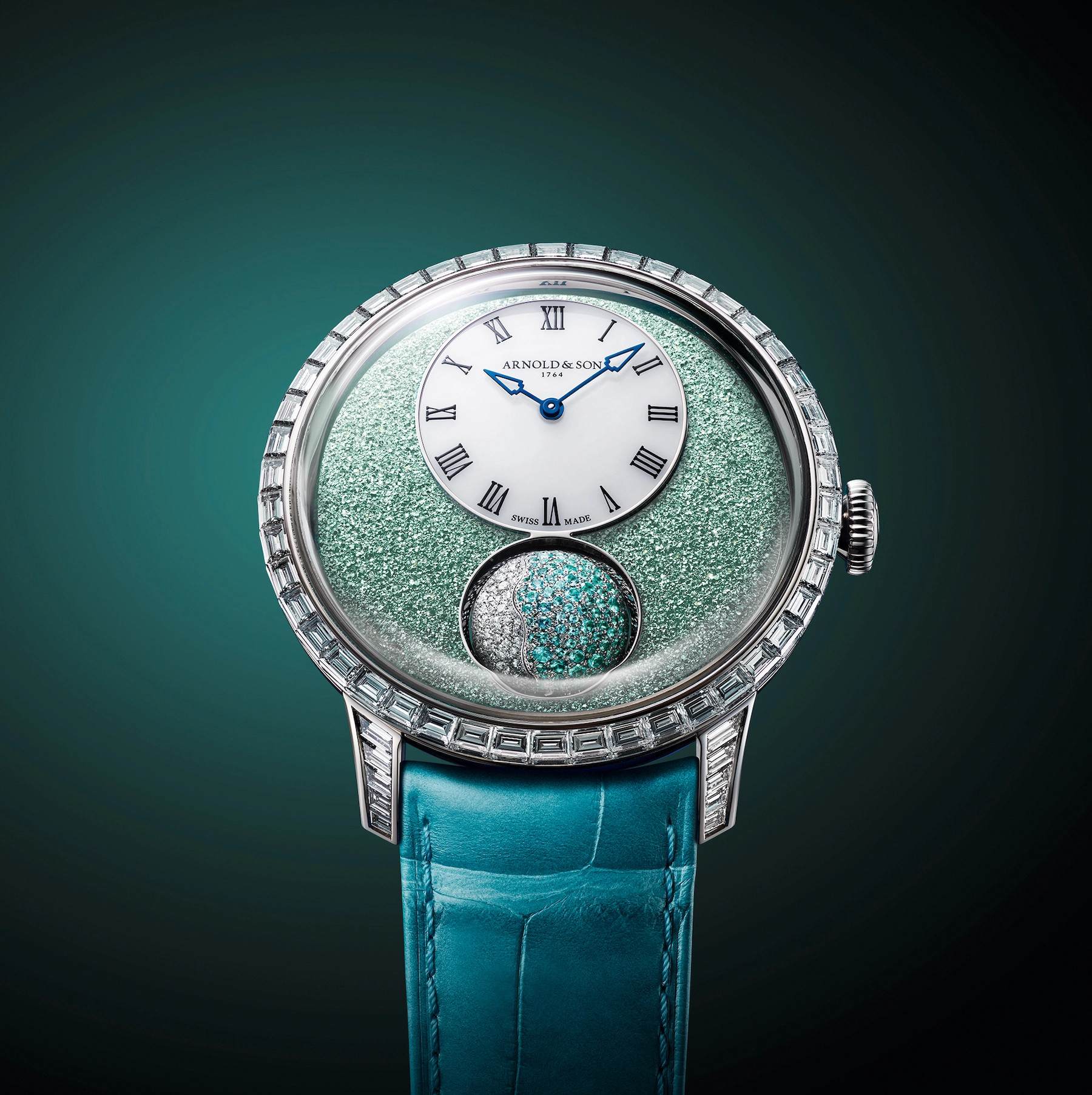 A blue lagoon of ruthenium

Arnold & Son has covered the dial with millions of ruthenium crystals. Ruthenium, a very hard metal, can be found in the same mines as platinum, but it’s much rarer. Before applying it to the dial, it was reformed into crystals and dyed with a color called “blue lagoon”. It creates a shiny and glittering effect on the dial. The time is displayed on a classic white opal sub-dial with black Roman numerals and blued arrow-tip hands.

To make the case look just as impressive as the rest of the watch, Arnold & Son has covered it with baguette-cut diamonds. The stones on the bezel actually overhang a bit so you can look through them. This also makes for a great glistening effect in the light. Oh, and did I mention that the case is made of 18K white gold? Just like the buckle on the strap, by the way, which is also covered with diamonds. The watch measures 44mm wide and is just under 16mm thick, including the double-domed sapphire. 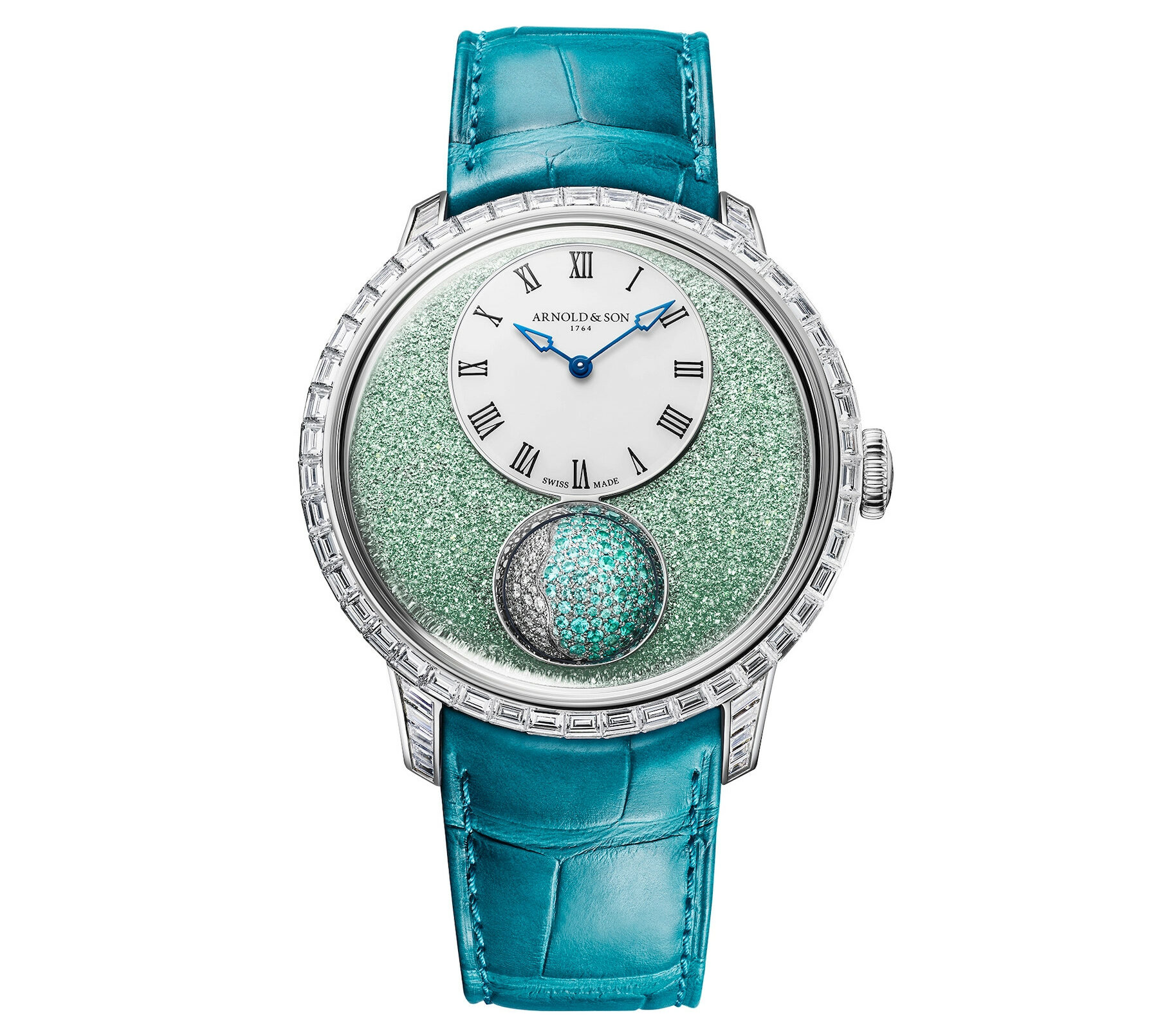 When I first saw a picture of the Luna Magna Ultimate II, I immediately thought of the Nassau-blue dial on my Autodromo Intereuropa. I really like how that color reminds me of tropical white beaches and a turquoise sea. Of course, the watch by Arnold & Son is a completely different beast than the Autodromo. Admittedly, I’m not a huge fan of all the glitter, but I do think the design is very tastefully done. And when you get tired of all those crystals and diamonds, you can always turn it over and look at that stunningly finished movement. Plus, no matter which side you’re looking at, you’ll always be able to admire that impressive 3D moonphase.

The Arnold & Son Luna Magna Ultimate II is available now, and you can find more info on the brand’s official website. Only eight pieces will be made, and it will cost you CHF 199,900 if you’d like to get your hands on one. That price excludes me from its target audience, but I’d be happy to behold one on someone else’s wrist!

Let me know what you think of the new look for the Arnold & Son’s Luna Magna family in the comments below.

Hot Topics
Introducing: The Omega Speedmaster Super Racing With Spirate System
149 comments
Design Vs. Specs — Which Is More Important To You When Buying A Watch?
85 comments
The Updated Bracelet For The Omega Speedmaster Professional 3861 — Here Is What’s New!
52 comments
The Time To Buy Is Now: How The Current Economic Climate Influences Watch Buying And How You Should React
49 comments
Introducing: The New Cartier Tank Française
49 comments
Popular
Top 10 Rolex Watches – Overview of Models Favoured By Our Readers
Fratello
25
Rolex GMT-Master History And Overview Of All Major References
Robert-Jan Broer
21
Hands-On: Rolex GMT-Master II in Steel and Everose Gold
Robert-Jan Broer
4