Review of Geneva May Auctions – PHILLIPS in association with BACS & RUSSO

Since they began their association with Phillips auction house to reboot the watch department, the power couple, Aurel Bacs & Livia Russo, have been rocking the watch auction scene. They have done that with exciting auctions and impressive results. Their two upcoming Geneva auctions in May, including their thematic stainless steel chronograph sale (entitled Start-Stop-Reset), are again impressive. The catalogs are simple and elegant yet bold and exciting. The adrenaline filled action in the room during their auctions is something that watch aficionados fly in to see live or watch via streaming video.

There are a few smart moves to note for this team that has put them on top. It begins with the fact that they get started early and they publish their catalogs before all the others, which may be easier since they have fewer auctions, but still results in collectors’ seeing their watches first. They put together a strong team in Geneva as well as the satellite offices and a brilliant advisory board, having been followed by several colleagues and friends. Also, this team hustles. They are flying around the world and working like crazy day in and day out. Their dynamic approach allows them to be directly in tune with market demand and they do a good job of bringing the holy grails of watches to the arena for collectors to battle over.

The thematic Start-Stop-Reset auction, which takes place on the evening of Saturday May 14th in Geneva is comprised of 88 stainless steel chronographs. Perhaps the most sought after and collectible category of watches today, this is the definition of giving people what they are asking for. There is a wide variety of brands, prices and eras represented while they all share the attributes of rarity and top condition. My brother and I got to preview these lots in Geneva and picked some of our favorites out of the 88. It was hard to choose as there were so many beautiful and amazing lots, but we did. We also have spoken so much about Omega Speedmasters, that we though it would be fun challenge to omit these from our picks. As it was expected, there are some exceptionally rare Rolex Daytonas, Omega Speedmasters and Patek Philippes. What we really love about this auction is that attention was also given to some of the niche brands and lesser known watches from Omega and Rolex that a thematic auction should bring to light. Here are the ones we chose to discuss: 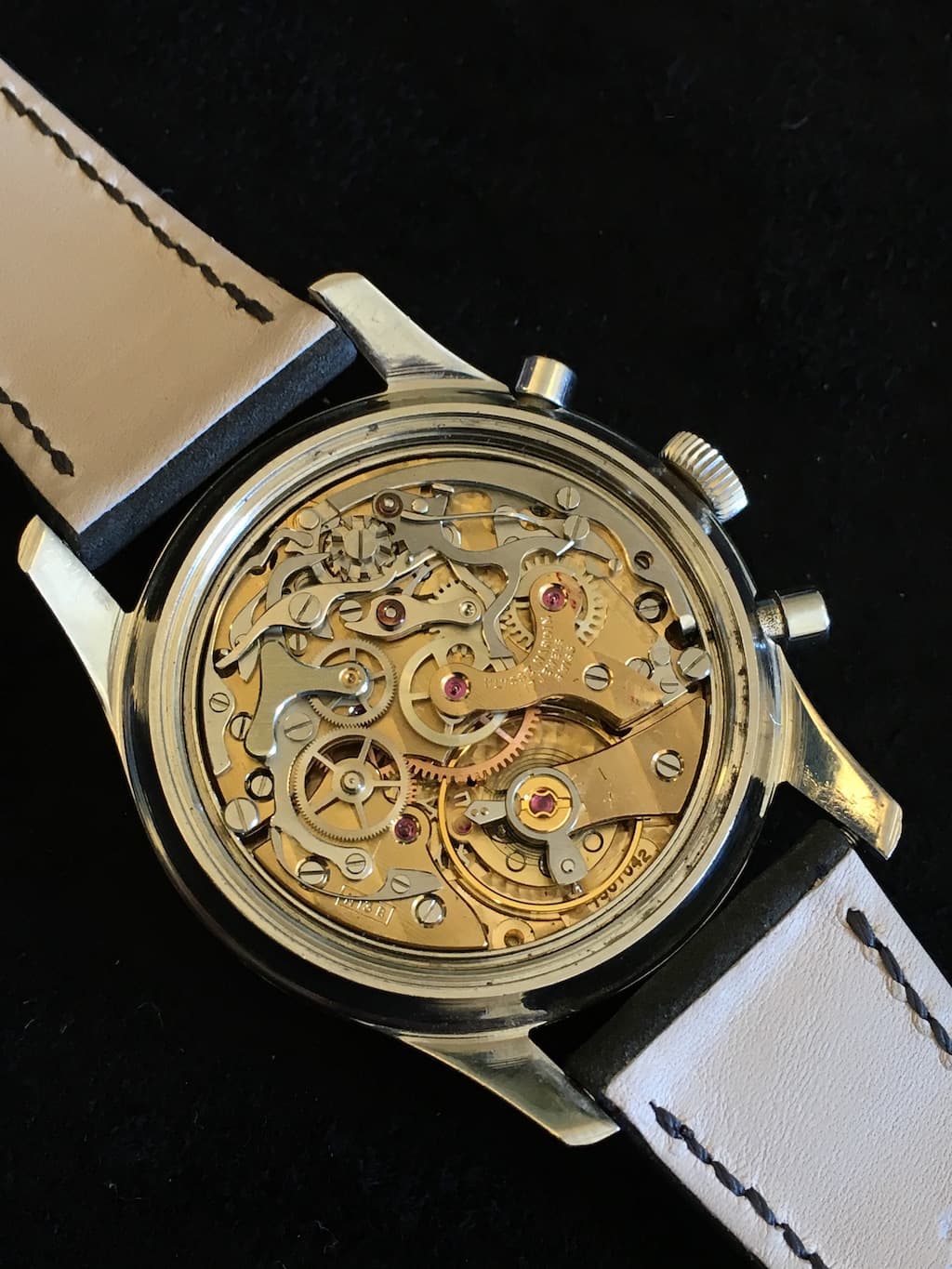 Imagine a Speedmaster straight lug case with its black tachymeter bezel that has a black with silver counter Rolex Daytona ‘reverse panda’ dial, but is much rarer than either. This Valjoux 72 base Ulysse Nardin chronograph is a rare and beautiful piece that deserves the collector attention it is getting in the market. It is part of the same phenomenon that has has taken the Universal Geneve ‘Nina Rindt’ V72 chronographs through the roof. These are really hard to find, so when a dark chocolate tropical example comes around, we expect a good fight. We have the feeling this one will be out of reach for us, but it is well deserved. 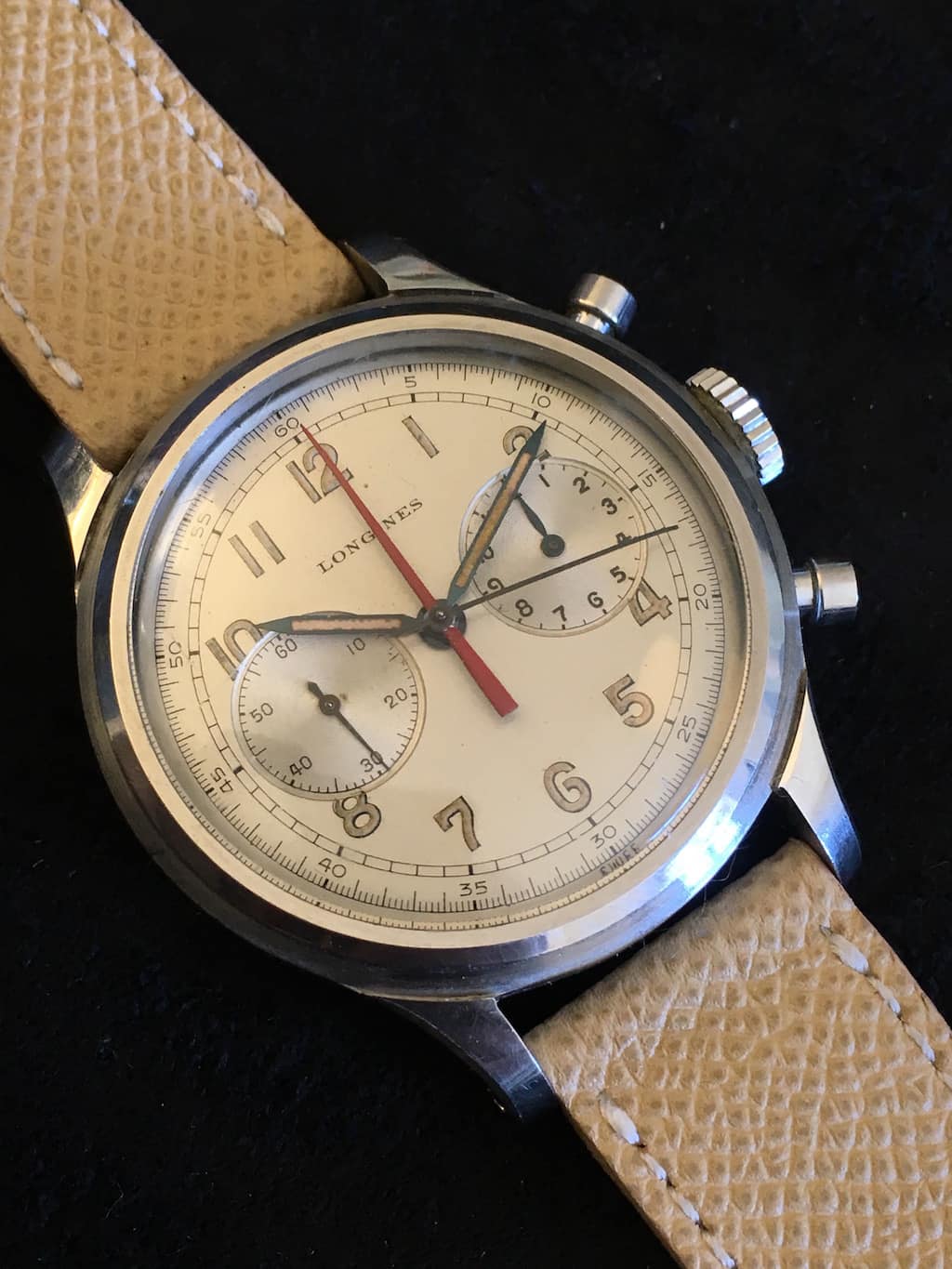 Longines stainless steel 13ZN chronographs have become a staple of any dream collection. Among these is the 13ZN 12, central-minutes chronograph, with the radium Arabic numeral dial. The blue hand is the chronograph seconds hand while the red hand is the minutes chronograph. The dial therefore acts as the register for seconds and minutes simultaneously while only the hour register is located at three o’clock. This nicely sized 39.5mm screw back case chronograph from the 1940’s is highly in demand and especially in mint and original condition. Considering a year ago these were trading for close to 50K and we know a similar example sold for 75K recently, the estimate seems spot on. 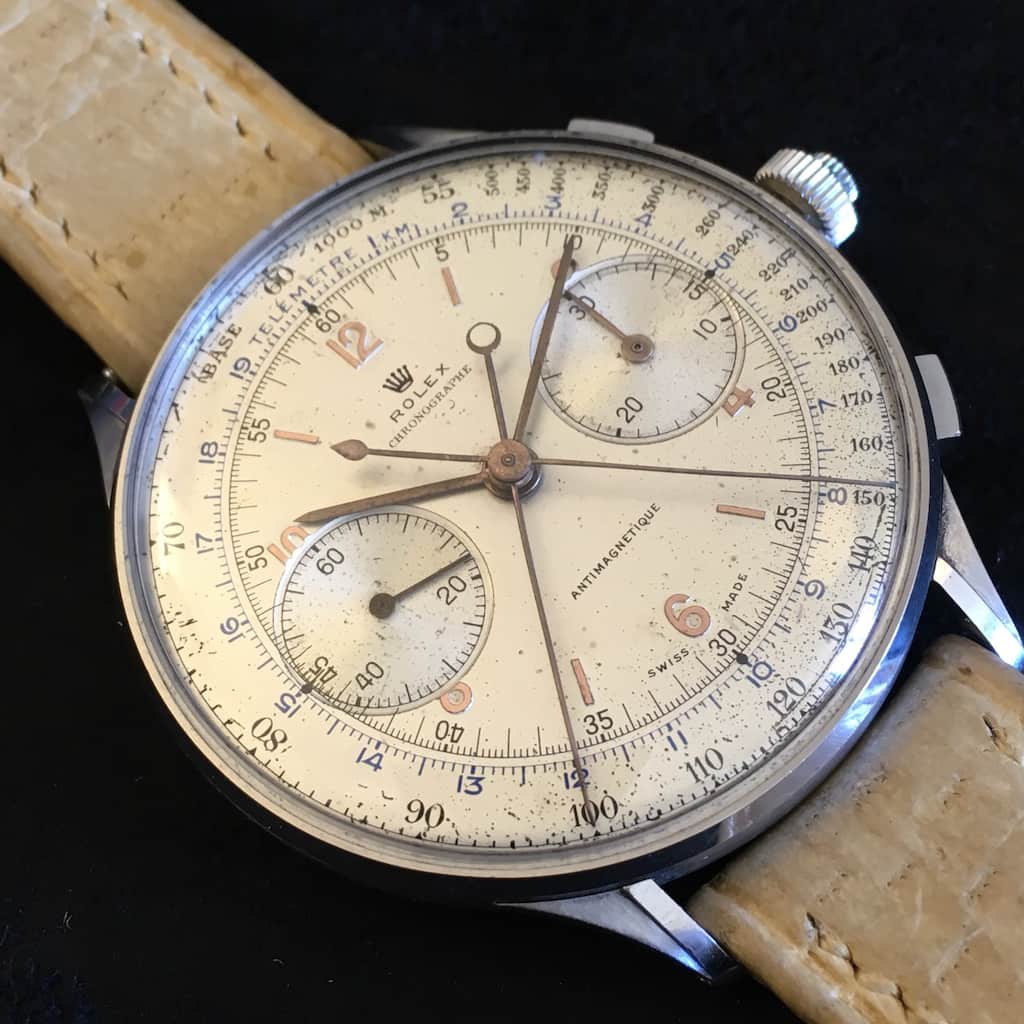 Even considering the popularity of vintage Rolex Daytonas at auction and high results seen in past years, this big boy still rules the Rolex chronograph world as the king of kings. A 1940’s Rolex large 44mm split-seconds chronograph sounds like a myth, but its real. Only 12 of these were ever made and were never offered to the public, but rather specially made for professionals. The crown has a pusher that starts & stops the chronograph, the upper pusher serves as the split/rattrapante function and the bottom pusher resets. The 4113 is the only split-seconds chronograph made by Rolex, the first Rolex to break $1 million at auction and we expect a room filled with people filming and posting the results when Aurel strikes the hammer. 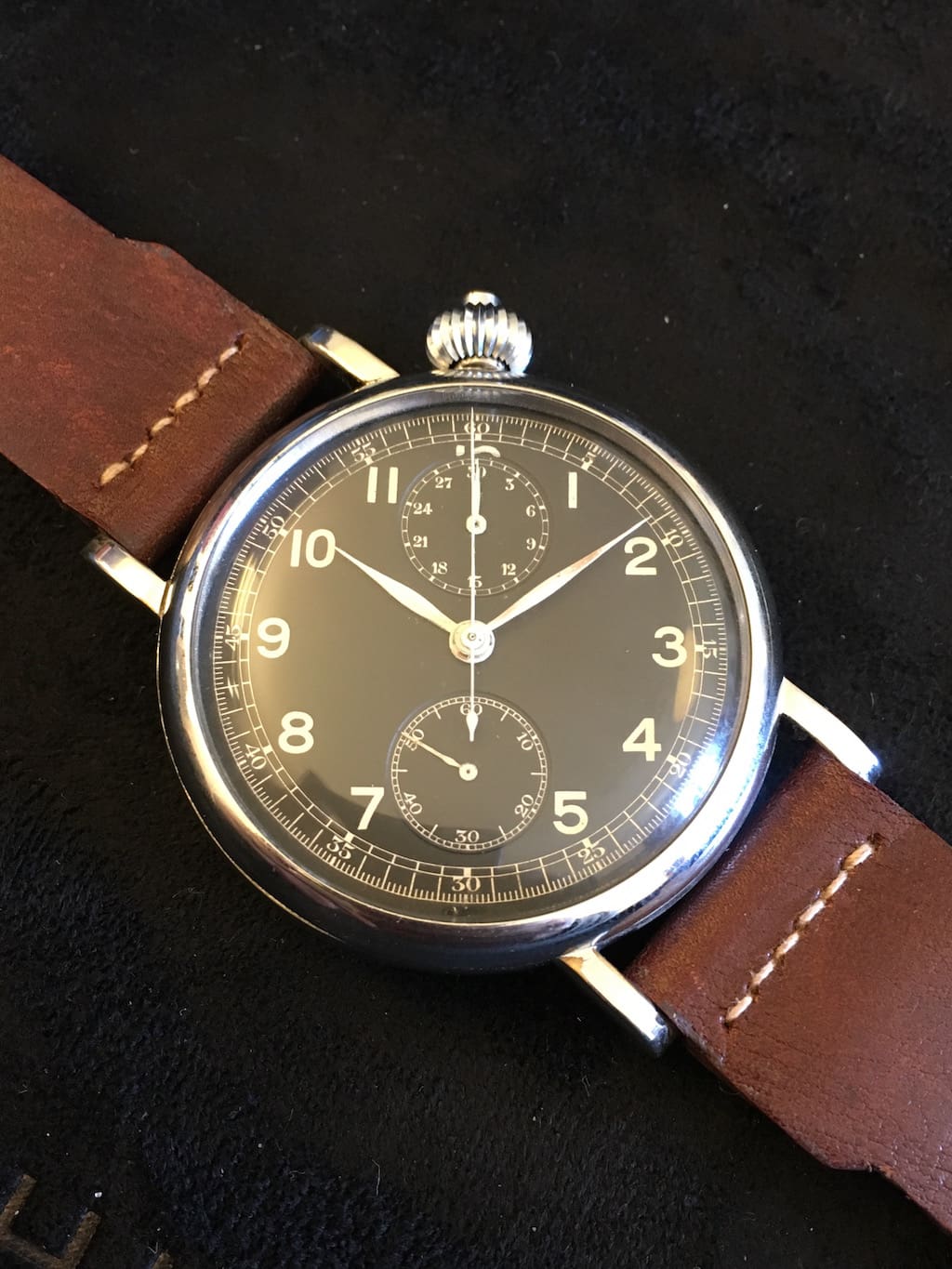 As you would expect with an aviator chronograph, this is the largest watch in the auction. At 51mm, it is hard to miss. It has an angled dial orientation as well as its single push chronograph at the crown. The case back has the military issued engraving as well as a US Army AC engraving on a bridge of the movement. Longines executed this piece from top to bottom for the US Army Air Corps, known today as the US Air Force, and clearly an unsigned dial makes sense because they had no need for branded goods. For military watch collectors, this is a hard one to pass up as it seldom comes up for sale. This makes it also hard to estimate in terms of the value, but had heard already a few years back that collectors were paying big money for these little known military watches. I tell myself ‘if I had the money’ and then I think ‘I would spend it on watches anyway and wouldn’t have any money left’ so I am curious to see how deeply collectors are willing to dig into their pockets for this one. 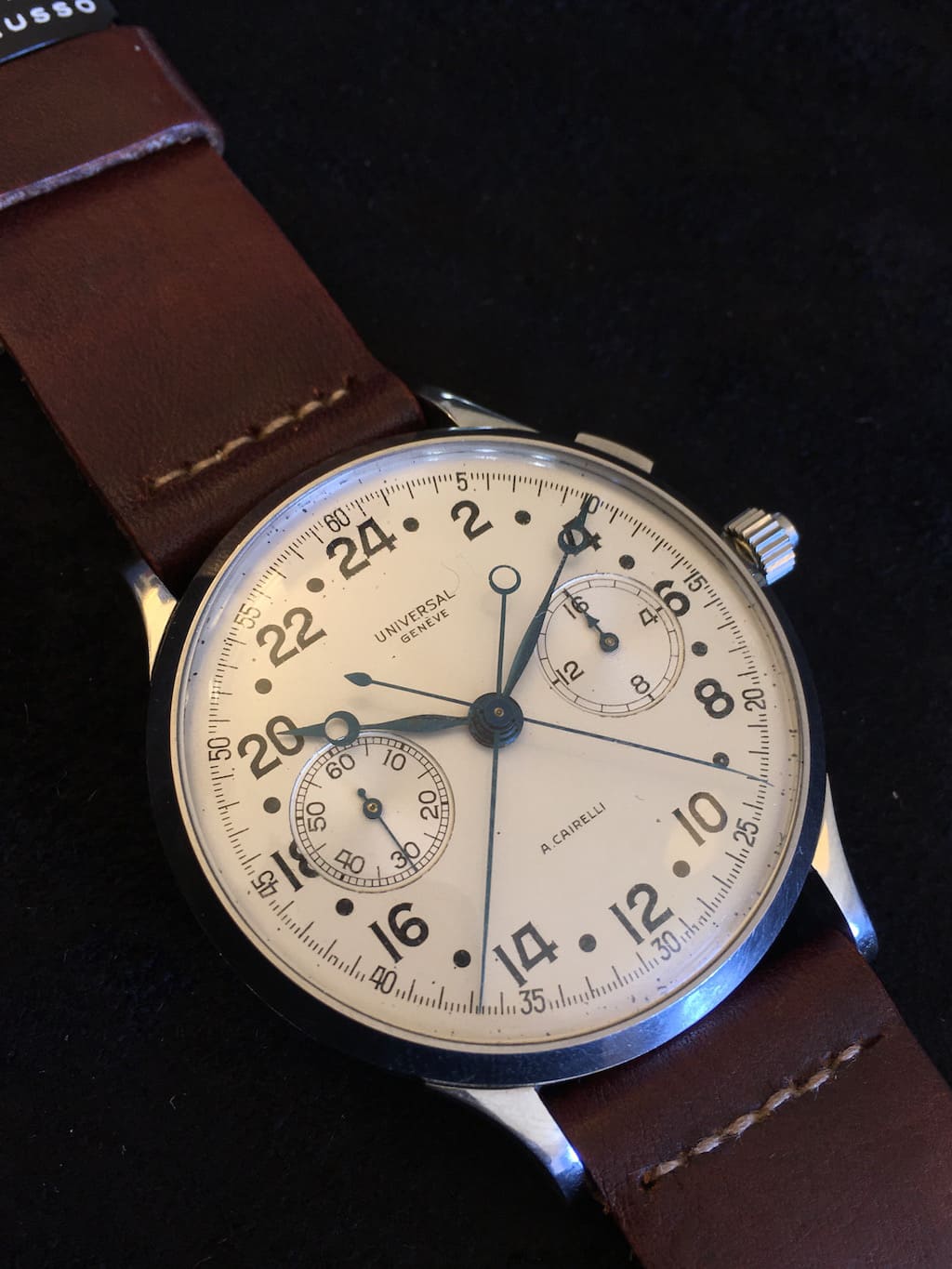 As mentioned above, military wristwatches were ideally suited for the development of stainless steel chronographs from a historic standpoint and this piece is the ideal fulfillment watch as it has so many amazing attributes. The 24-hour dial or military time was ideal for military pilots as well as the large 44.5mm size for legibility. It is fitted with a Valjoux 55 base split-seconds chronograph movement, which was also a useful complication. The case back is engraved AMI (Aeronitca Miliatare Italiana) with the rare MM serial number (Marina Militare) meaning it was delivered to the Italian Navy.

In addition, the dial is signed A. Cairelli (as we have seen more commonly on the Zenith CP-2 flyback chronographs), which was a Rome based Italian retailer who specially developed, ordered and supplied the Italian Air Force with wristwatches. This particluar example went to the Italian Navy as mentioned above, which are much more limited in quantity of an already rare piece. This retailer signature was much like the history of Panerai, also an Italian retailer, but based in Florence, which had developed and patented the Radiomir and supplied the Royal Italian Navy.

With the recent surge in demand for Universal Geneve chronographs, a rare military issue split seconds 24-hour model such as this one again demonstrates the Phillips watch department’s ability to bring top quality level watches to auction.

The general auction, which takes place on the evening of Sunday May 15th in Geneva is comprised of 138 watches and there obviously are no stainless steel chronographs in this one.

The majority of the watches come from the dominant auction brands, so 56 Rolexes, 32 Pateks, 12 Vacherons, 6 APs and 6 Omegas, which make up 112 out of the 138 lots. A nice surprise was to see 5 really nice Piaget jewelry watches, 4 of which are bracelet or manchette watches, that we have noticed doing well the past years at auction and it is a beautiful selection. In my opinion, not enough attention is dedicated to the Piaget vintage ladies watches as they truly crafted some beautiful designs in the 1970’s. Overall, a very interesting and eclectic selection that we enjoying looking through, but clearly we had our favorites and coincidentally all diver watches, so here they are: 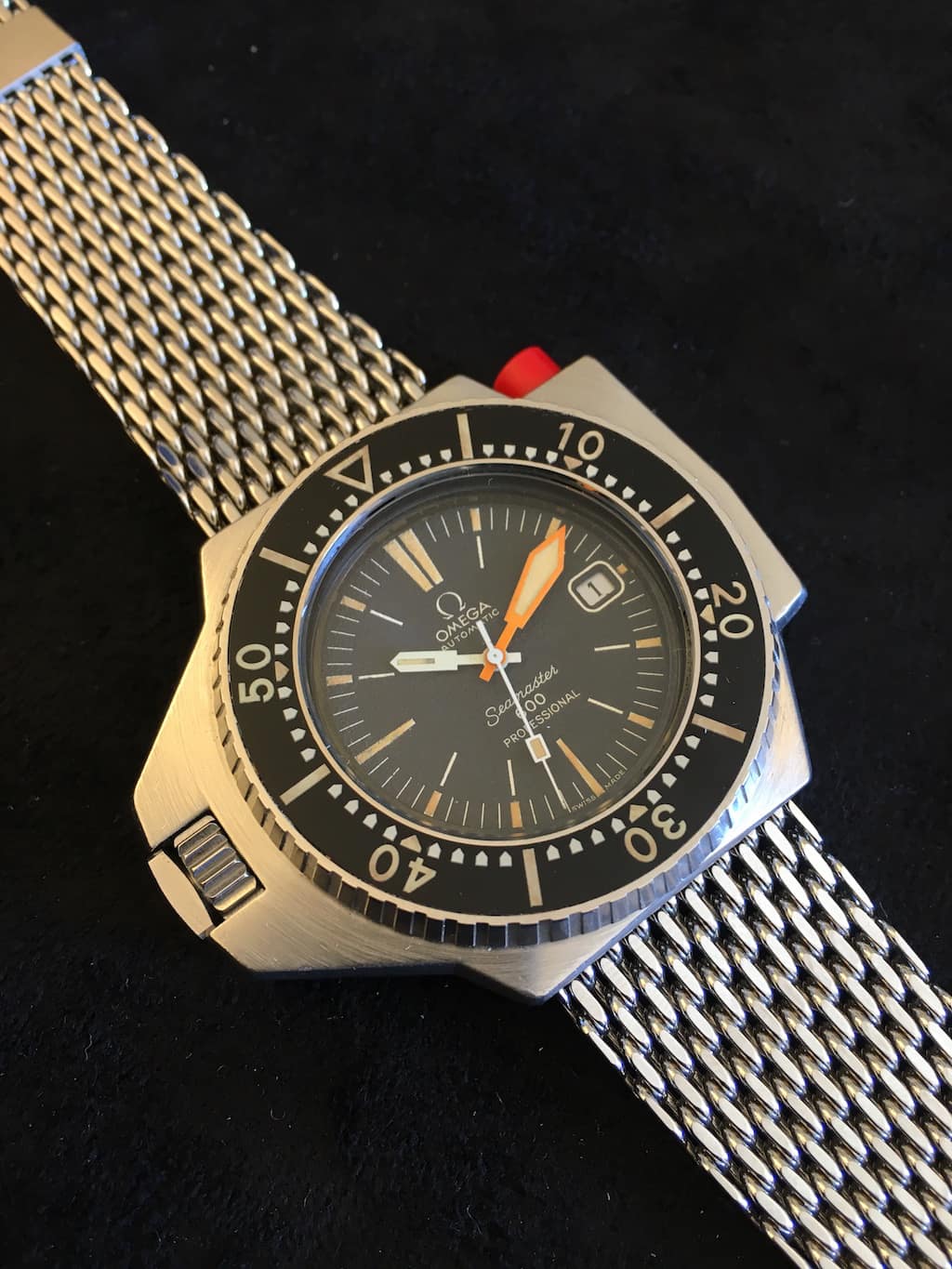 Although Rolex’s development of the Sea Dweller with its patented helium escape valve is most commonly associated with the Comex diving company, Omega was involved with Comex as well in the development of their Seamaster 600 “Ploprof”. Also, famed diver and filmmaker Jacques Cousteau helped in its development. Ploprof was a nickname that came from the French term ‘plongeur professionel’, which means professional diver in English. Considering the Comex association was short lived and how rare these original prototypes are, we were delighted to see one in this sale. This chunky diver was re-edited by Omega a few years ago and is still part of their collection today. Not an easy watch to wear around, but it is a time machine for the wrist that takes us back to diving tool watch development and advancements in the 1960’s. 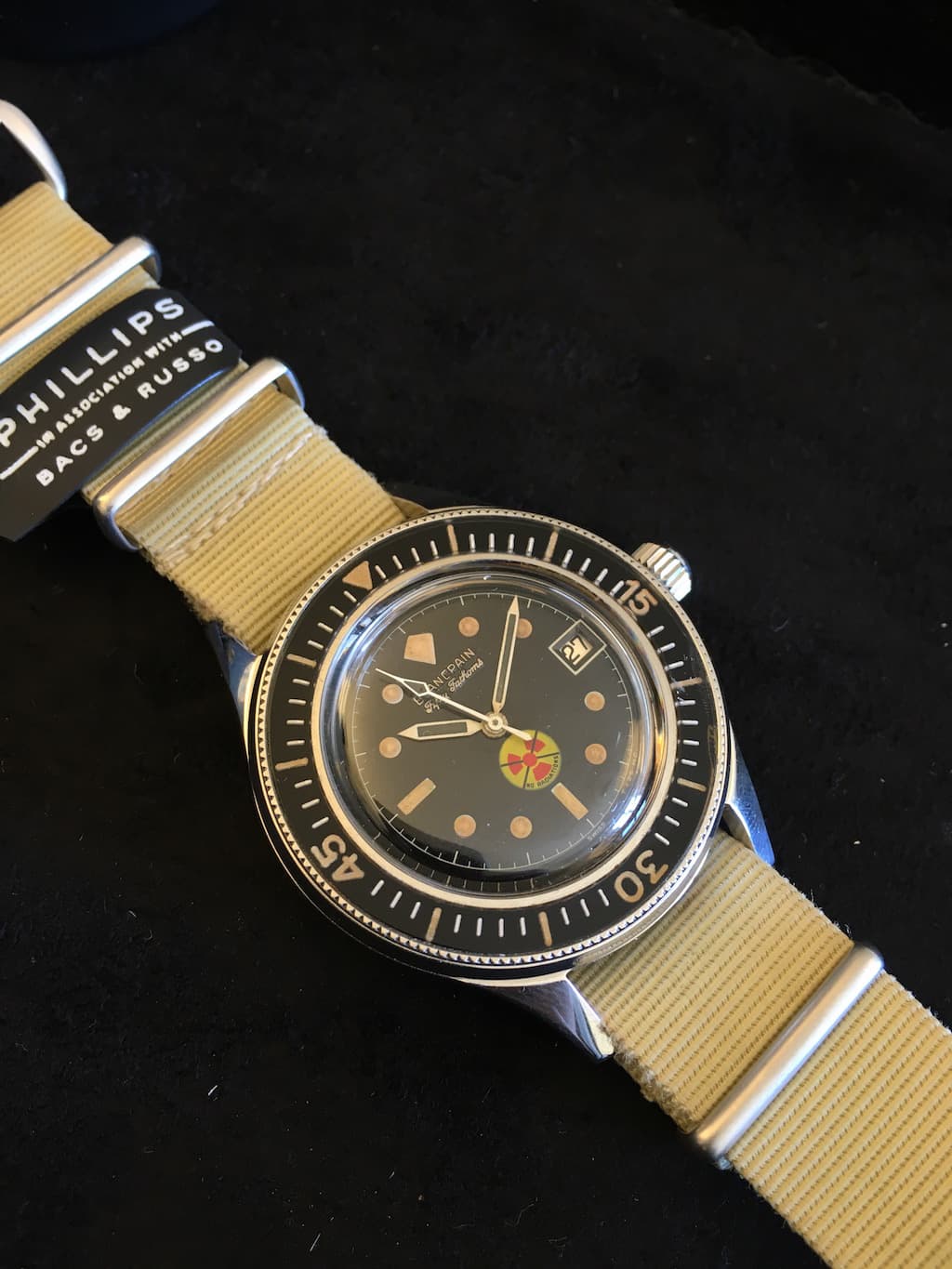 The early to mid 1950’s gave birth to the development of the diving tool watch. Blancpain was a critical player in this development.

Under the tenure of CEO Jean-Jacques Fiechter, an avid diver, Blancpain developed its first real diving watch. The name Fifty Fathoms, the equivalent of 91.45 meters, was the depth rating for this watch. It was developed with specifications and collaborative efforts of the French Combat Diving School. The release took place in 1953, one year before Rolex released the Submariner.

This ‘No Radiations’ version meant it was destined for civilian use as Blancpain had contracts with several militaries at the time. 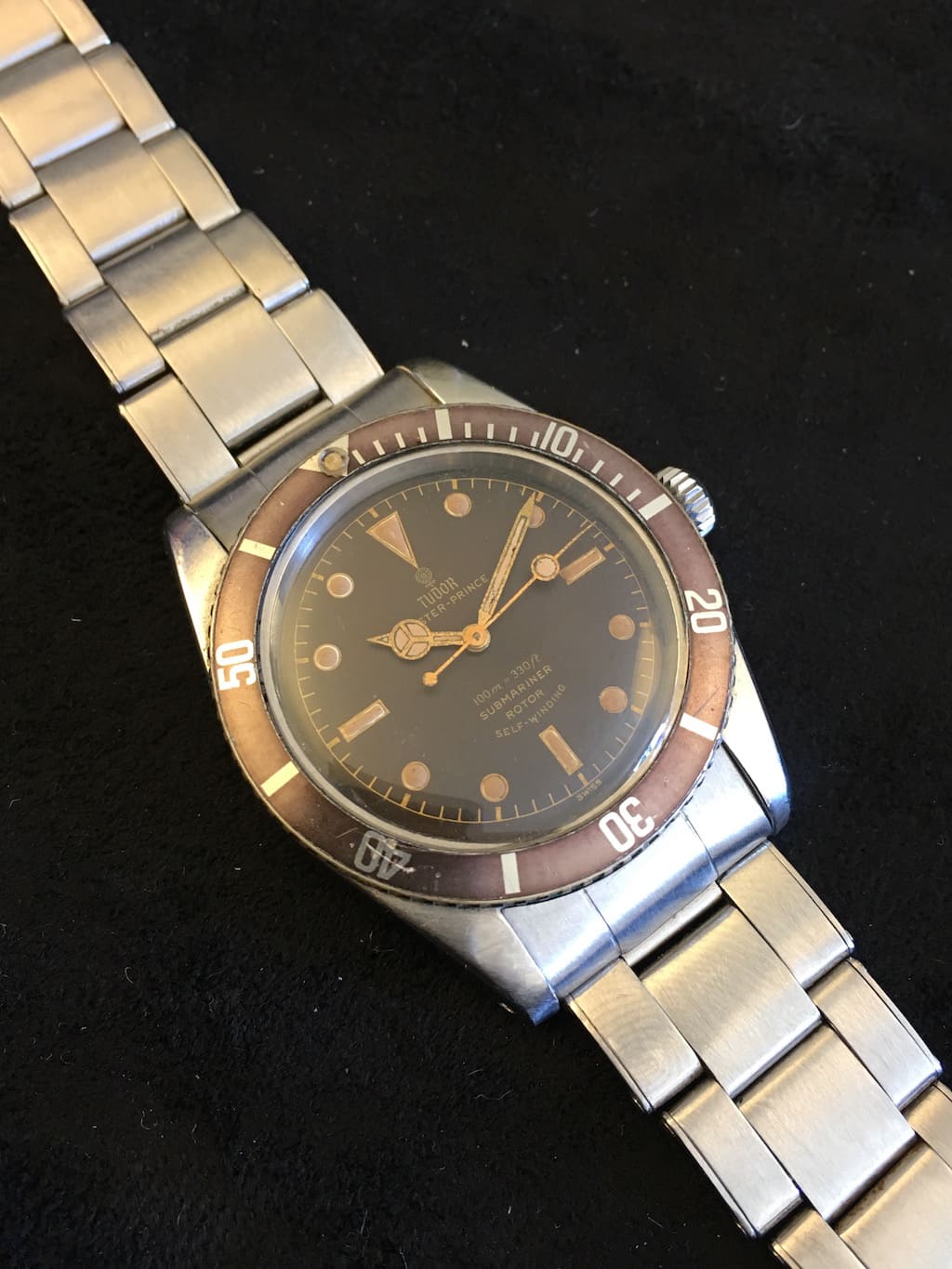 Although we used to call these the poor-man’s 6536 (referring to the equivalent Rolex ‘small crown’ model from the same time period), it seems to no longer be the case. Tudor, although still shy of Rolex prices, has been catching up. Still, we find these to be great vintage diver watches and with how the Tudor brand has been revamping itself in the past few years, their vintage watches have gained a lot of interest as well. Although the bracelet is definitely a later one, the watch looks great and we like vintage Tudor Submariners as they are in fact rarer than the Rolex ones. Fewer were manufactured and since they were cheaper than their Rolex counterparts, they were likely mercilessly beat up therefore even fewer survived. 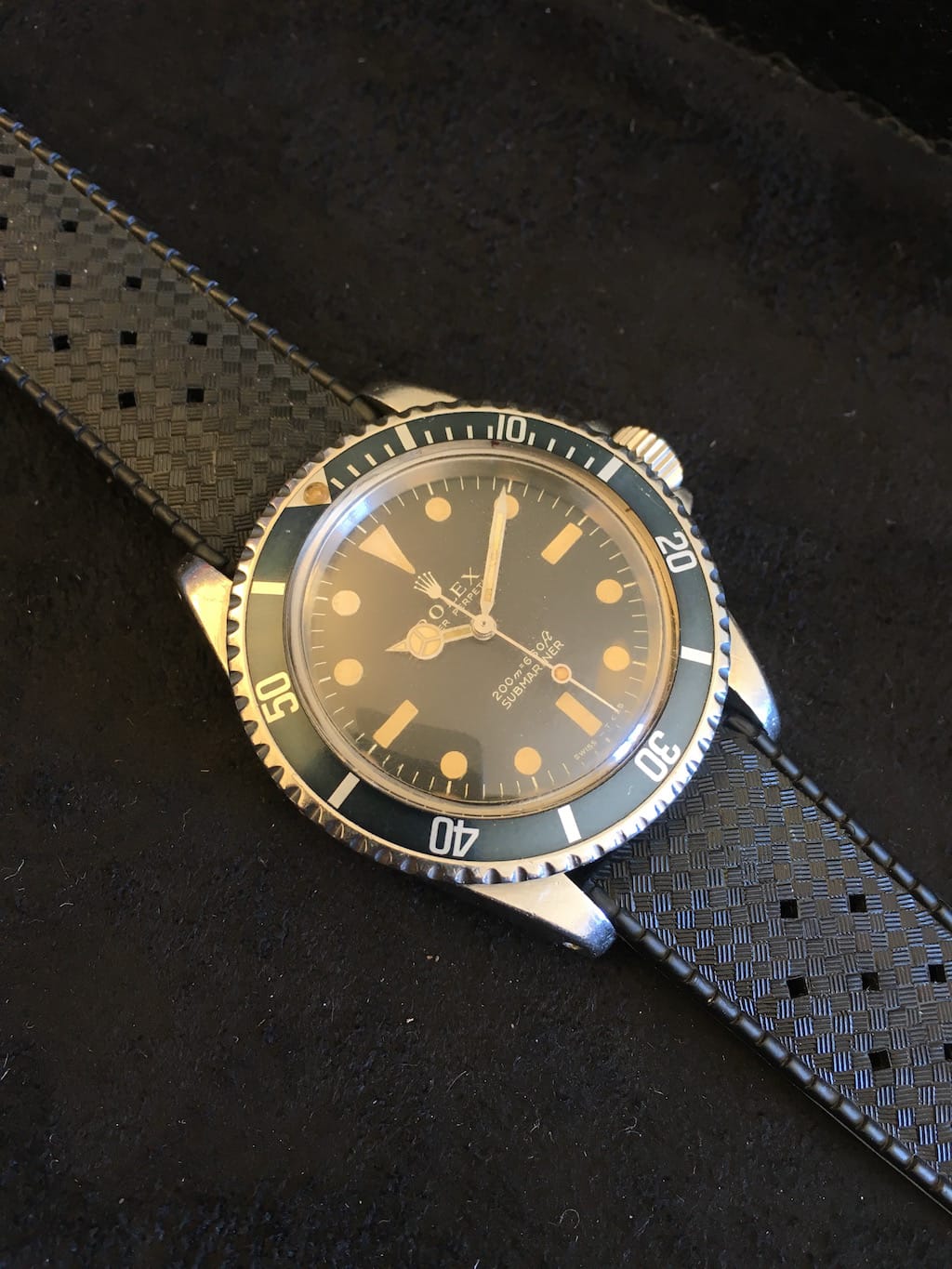 So when it comes to military issue Submariners, we usually think of the British Royal Navy Milsubs, but the Chilean Navy (Armada de Chile) had ordered Submariners also. Of course, far fewer were delivered and way less people know about them. These did not have the military specs that the Milsubs do, but are military issue nonetheless and highly collectible. This watch was issued before the coup and ensuing military dictatorship, when the still in power president Montalva was an avid supporter of his county’s navy and naval education. What followed after the 1973 Chilean coup d’etat by the Chilean Navy and the other armed forced, was far less glamorous.

This watch has an interesting background and so few have ever surfaced, it is hard to estimated the value. The inner case has the matching last three digits of the side case serial number, which was also seen in Fuerza Aerea del Peru (the Peruvian Air Force or F.A.P.) delivered Rolexes.

More information via Phillips. We’d like to thank Sacha Davidoff for the contribution.