Several of us at Fratello were rather impressed by the massive release of reworked marvels in the Royal Oak series, including one of my all-time favorite fumé dials. But much of it fades when faced with the new Audemars Piguet Royal Oak open-worked trio.

We conclude our AP coverage this week by delving into the new open-worked and long-named versions of the venerable octagonal-bezeled Genta creation. These are two similar yet very different approaches to the art of skeletonization, and they left me with a deep affinity for the art of contrasts. One of the most charming aspects is the way Audemars Piguet has chosen to frame its flying tourbillon. A complication created to increase pocket watch accuracy, here it gets a symmetrical and futuristic home within the angular caliber 7124. 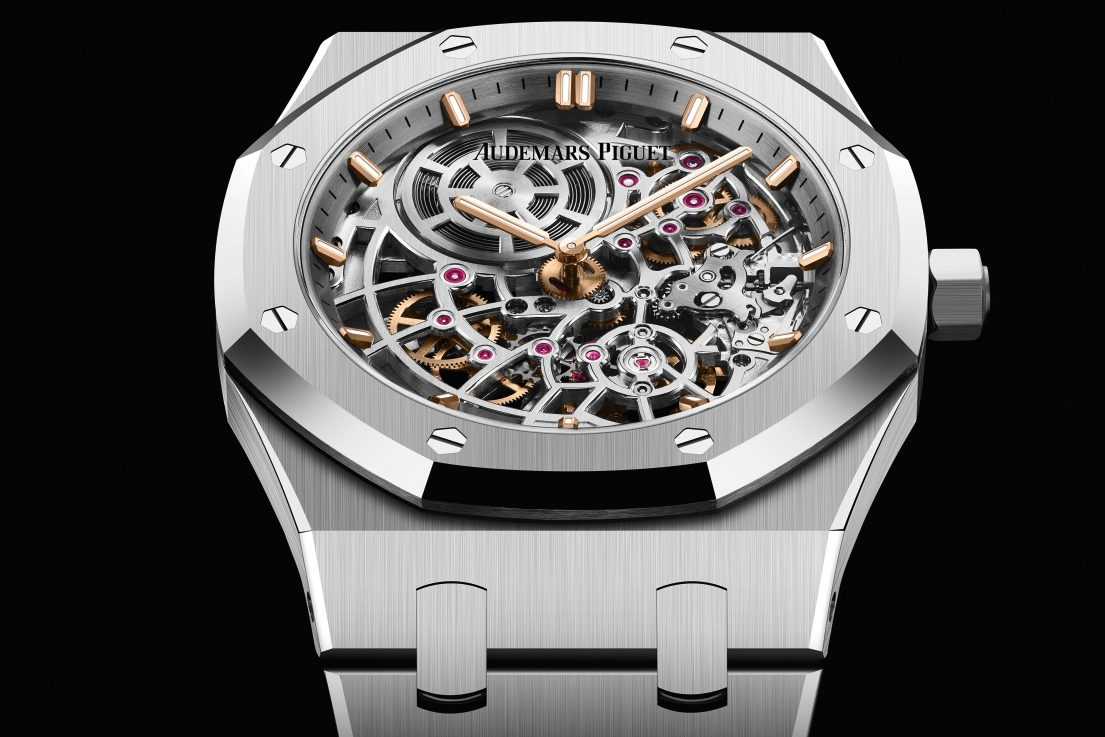 A long model name brings with it an extra dose of panache, often moving a watch up the rungs of a brand’s horological ladder. The Audemars Piguet Royal Oak Jumbo Extra-Thin Openworked 16204ST is no exception. This is basically a skeletonized version of the 16202, making it all sound rather simple. It’s not. The new case shape and tapering bracelet are the same, but that is where the similarities end, sort of. If you love mainspring barrels, this one’s for you, as the driving force in the 7124 caliber has pride of place at 11 o’clock. Obviously, this is not as scintillatingly exciting as watching the twirl of a tourbillon, but it’s here for a reason. The delicately framed spring barrel within an intricate web of bridges is here to prove an extra-thin point, as simple as that. 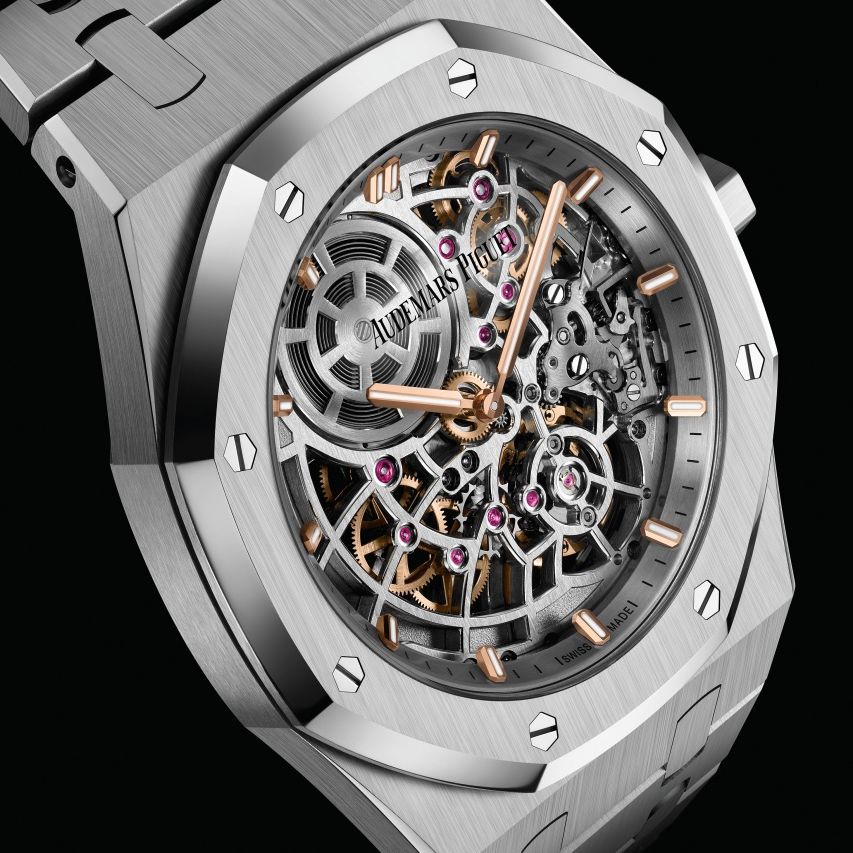 Gold touches within a spider’s web

Unlike the monumental bridges of the Royal Oak Selfwinding Flying Tourbillon Openworked you will read about later, here we see a tightly woven spider’s web, almost a filigree pattern of steel. The regular 16202 itself is a feat of delicate juxtaposition. Here, however, Audemars Piguet paints an intricate picture through micro-engineered hand-finished metal. Each arched piece of bridgework opens up another piece of the puzzle within the new caliber 7124. It is fascinating both as spectacular craftsmanship and as a lesson in the functions of a mechanical movement. This all becomes even more captivating with the 18K pink gold reference, the dark slate gray of the movement a perfect contrast to the pink gold. The spring barrel is even more prominent but somehow works to create more life in the “dial”. And the white gold bezel screws shouldn’t work, but they do. 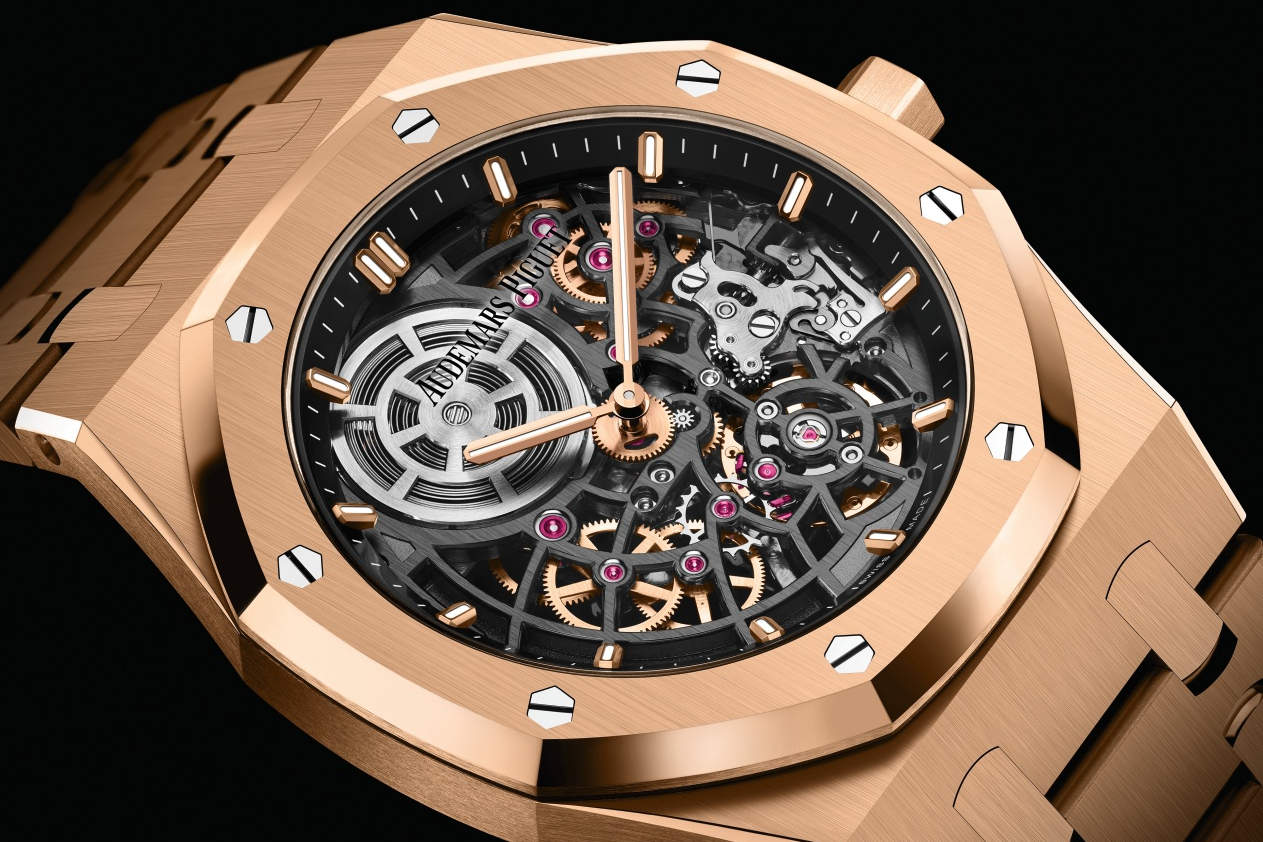 An intricate feat of reduction

Unlike the more monochrome vision of the rather spectacular 41mm Flying Tourbillon dial, this is somehow more whimsical. Your entire perception changes when you realize the 8.1mm thinness of the case and realize that this is a pure engineering marvel as much as hand-crafted beauty. I do enjoy the wafer-thin Octo Finissimo, but here, we are treated to a much more elaborate vision. The filigree-like detail work within the dial, and the fact that indices and hands are crafted from gold appeals more to me. The experience somehow becomes richer, more personal, rather than a matte, high-tech lab feeling. At €86,800, I’m in love with the steel, but for €113,300, I would marry the 18K pink gold version. 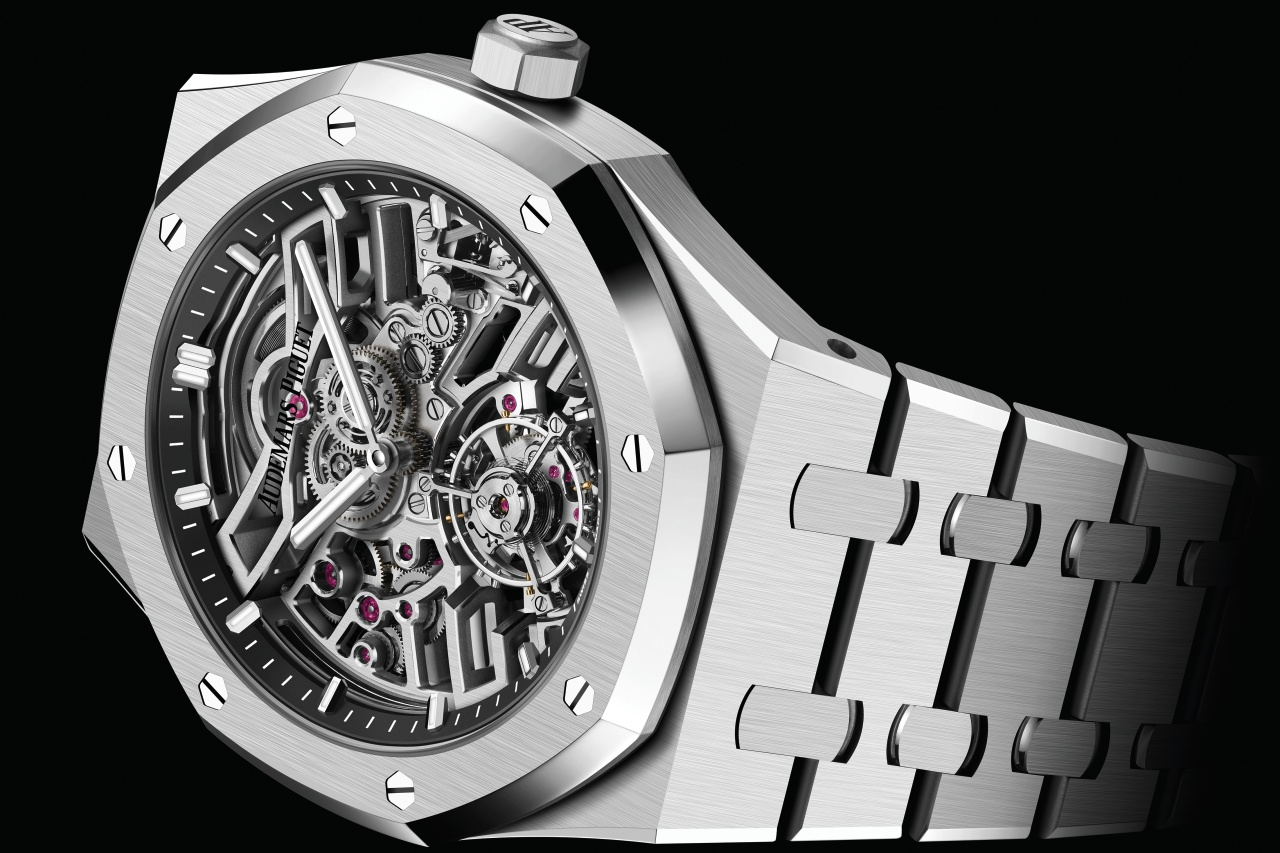 I know, looking at this and dismissing it as beyond the reach of mere mortals is a natural reaction. It only takes one brief look at the symmetrical cathedral of haute horology on display here. A watch that constitutes the pinnacle of Royal Oak-dom has every right to have a six-word model name. The Royal Oak Selfwinding Flying Tourbillon Openworked is exactly as complex as trying to say its name out loud without drawing a second breath. A glance at the 6 o’clock position sets the tone with a mechanical ballerina in the shape of a flying tourbillon. 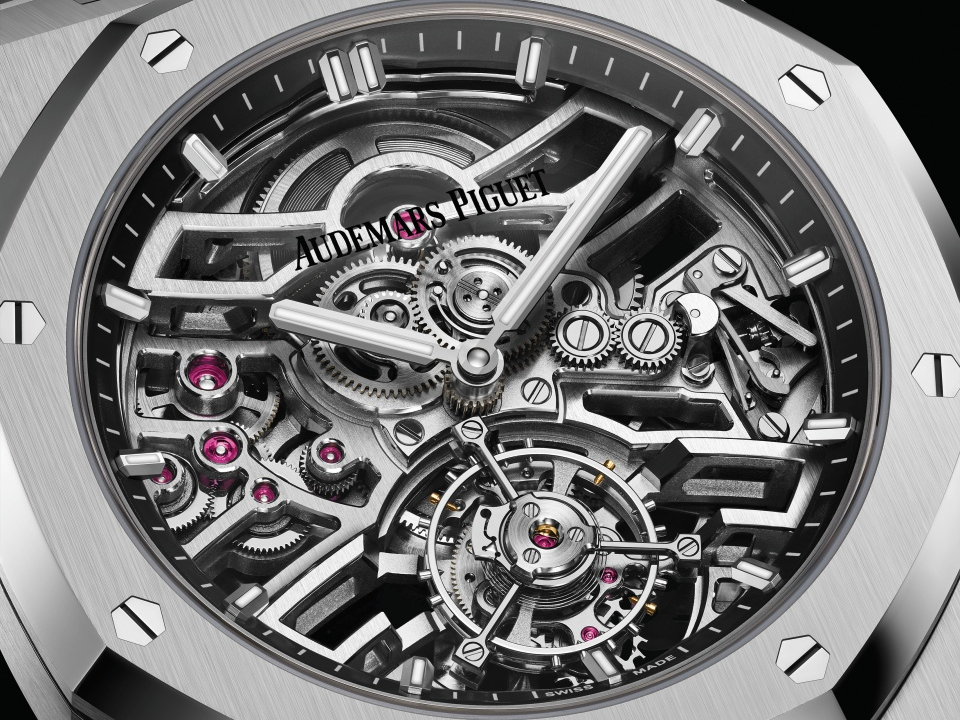 It’s all about the lack of a dial

This is the top trumps of celebratory releases from Audemars Piguet marking the 50th Anniversary of the Royal Oak. We recognize the slightly retouched case and bracelet from the 16202; to be fair, though, I would not notice it without both an expert and a reference model. Here, it’s combined with what is an homage to the first automatic tourbillon movement — yes, the caliber 2870 from AP. Invariably, the standards are set pretty high. You might notice the eight slightly wide polished chamfers on the bezel if you manage to look beyond the skeletonization. While you try, take in the fact that this movement resides in a case only 10.6mm thick. 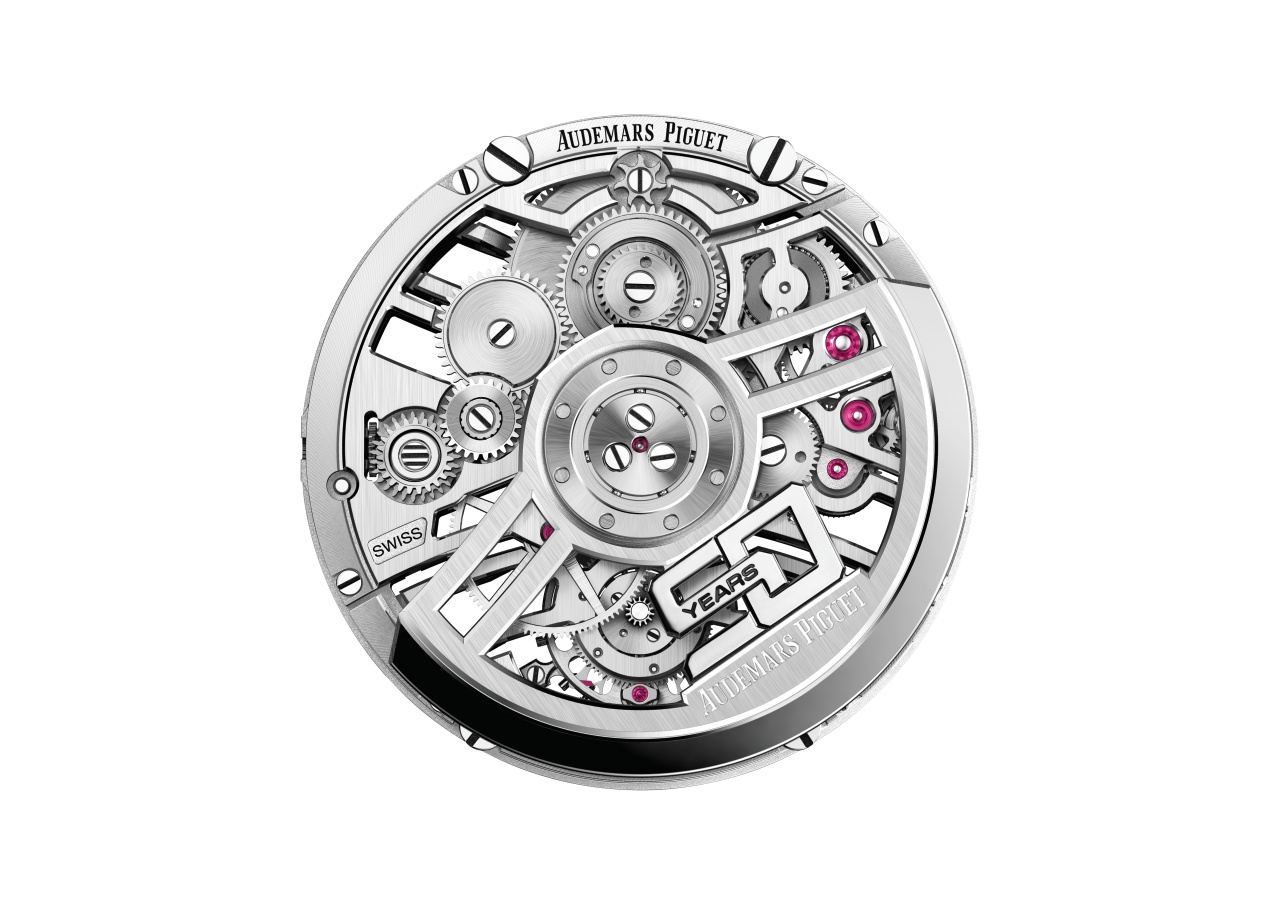 You might find the 41mm case looking slightly larger than previous versions. The reason for this visual trickery is a more dramatic taper to the suave bracelet. The octagonal bezel with its white gold screws frames a bewildering number of surprisingly symmetrical components. Each part of the bridgework is cut down to a bare minimum, with exacting anglage glinting in the shots. Within this micro-mechanical temple to the semi-deity of the Royal Oak, your gaze will be drawn to the six o’clock position. The 2972 movement is an evolution of the 2950, with the star attraction being a flying tourbillon. Suspended only from the back, the whirling cage is visible in all its glory, and it is spellbinding. A dark rehaut with white gold indices encircles the dial, a floating Audemars Piguet logo appearing ethereally at 12 o’clock. 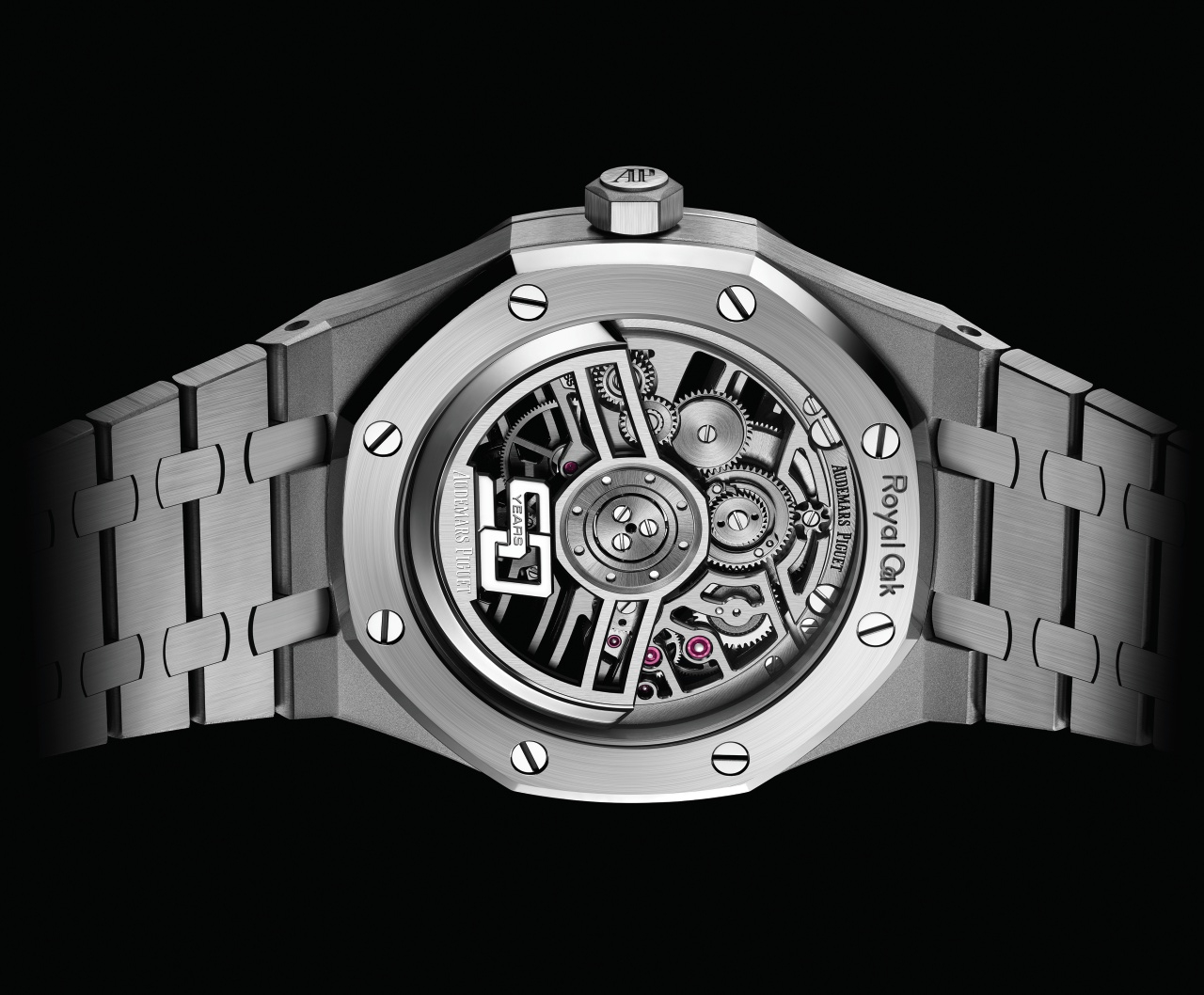 All of the required €218,000 have their reasons. Each of the 271 components in the 27-jewel caliber is expected to excel in both visual and technical complexity. What strikes me is the monochrome delight of marked contrast between a traditional flourish and a contemporary edge. This manifests in the fact that each angle of the perfect skeletonization is truly modern. Gone are the arches and pointed curvature, replaced by an angular beauty. The only touch of color is present in the seemingly haphazard spread of jewels, each pop of purple-red a celebration of horological functionality.

The mainspring barrel looming large at 12 behind a wing-like bridge brings a totem-like feel to the dial’s central axis. To be honest, this short article took me a long time to get down on paper. The Royal Oak Selfwinding Flying Tourbillon Openworked deserves several chapters or a short novel. Where do I sign for my “A Week With The…” assignment?

What do you think of the new open-worked Royal Oak models?

Did any of these make your grail list? I don’t know about you, but I was suitably impressed by what is pretty much the pinnacle of the Royal Oak gospel. Let us know in the comments what you think of these watches, and if money were no object, would you wear one yourself?