Is it a watch for her, for him, or for you?
Sky Sit
comments 12
Share

In commemoration of the Royal Oak’s golden jubilee, Audemars Piguet presented a slew of 50th-anniversary novelties earlier this year. One of them was an updated version of the 34mm sell-out model in black ceramic that debuted only last year. As the fanfare ensues, the premier Swiss watchmaker reveals a new variant of this highly coveted timepiece. Audemars Piguet has created a one-of-a-kind iridescent dial for the latest 34mm black ceramic Royal Oak Selfwinding. This seductive rendition is limited to 300 pieces and developed in collaboration with famed Italian jeweler Carolina Bucci.

Bucci is a high-profile name in her own right. She is also the woman who started the Frosted Gold series in 2016 to celebrate Jacqueline Dimier’s 1976 “Royal Oak for women” on its 40th anniversary. Bucci introduced her signature gold hammering, an ancestral Florentine technique, to numerous Royal Oak collections that still remain today. 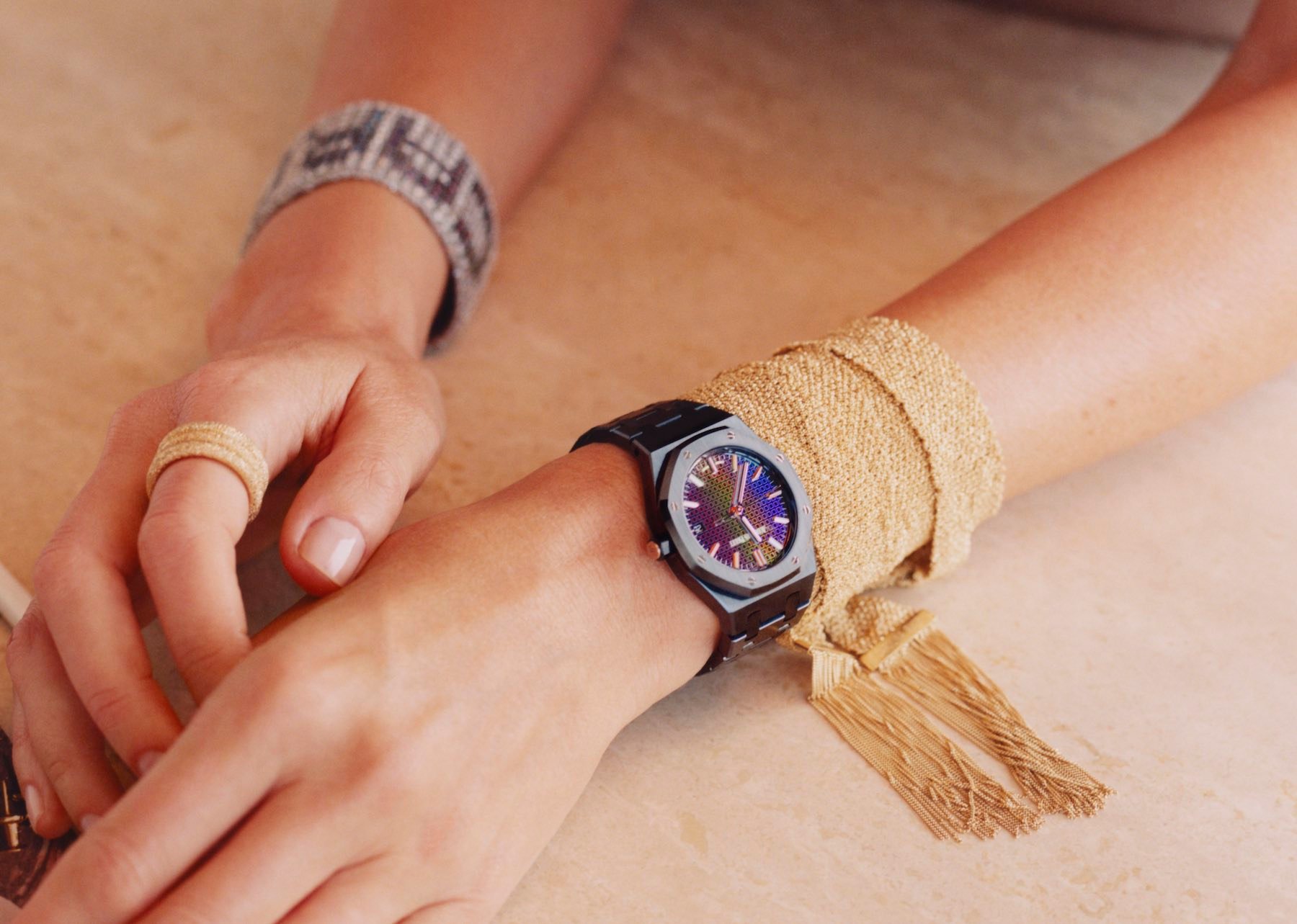 For her third collaboration with Audemars Piguet, Bucci was challenged to enrich an all-black ceramic piece with a surprising dial. She decided to focus on contrasts and honor the iconic 1972 Tapisserie design by Gérald Genta.

Bucci has endowed this new model with a dial glistening with a myriad of colors to elevate the “Grande Tapisserie” pattern in relief. Depending on the light, the dial can appear black, but the movement of the wrist produces reflection from different angles. The iridescence also varies from dial to dial, making each of the 300 pieces one of a kind.

It was, in fact, the result of three years of perseverance through the pandemic, involving innumerable prototypes. To achieve the correct hues, Audemars Piguet developed a special reflective sapphire plate to mount on top of the black brass dial. One side of this plate is laser-etched with tiny squares via micro-structuring, which creates indentations to fit onto the geometric dial. The other side of the sapphire plate receives a specially developed golden metallic treatment to create a mirror effect for maximum light play. 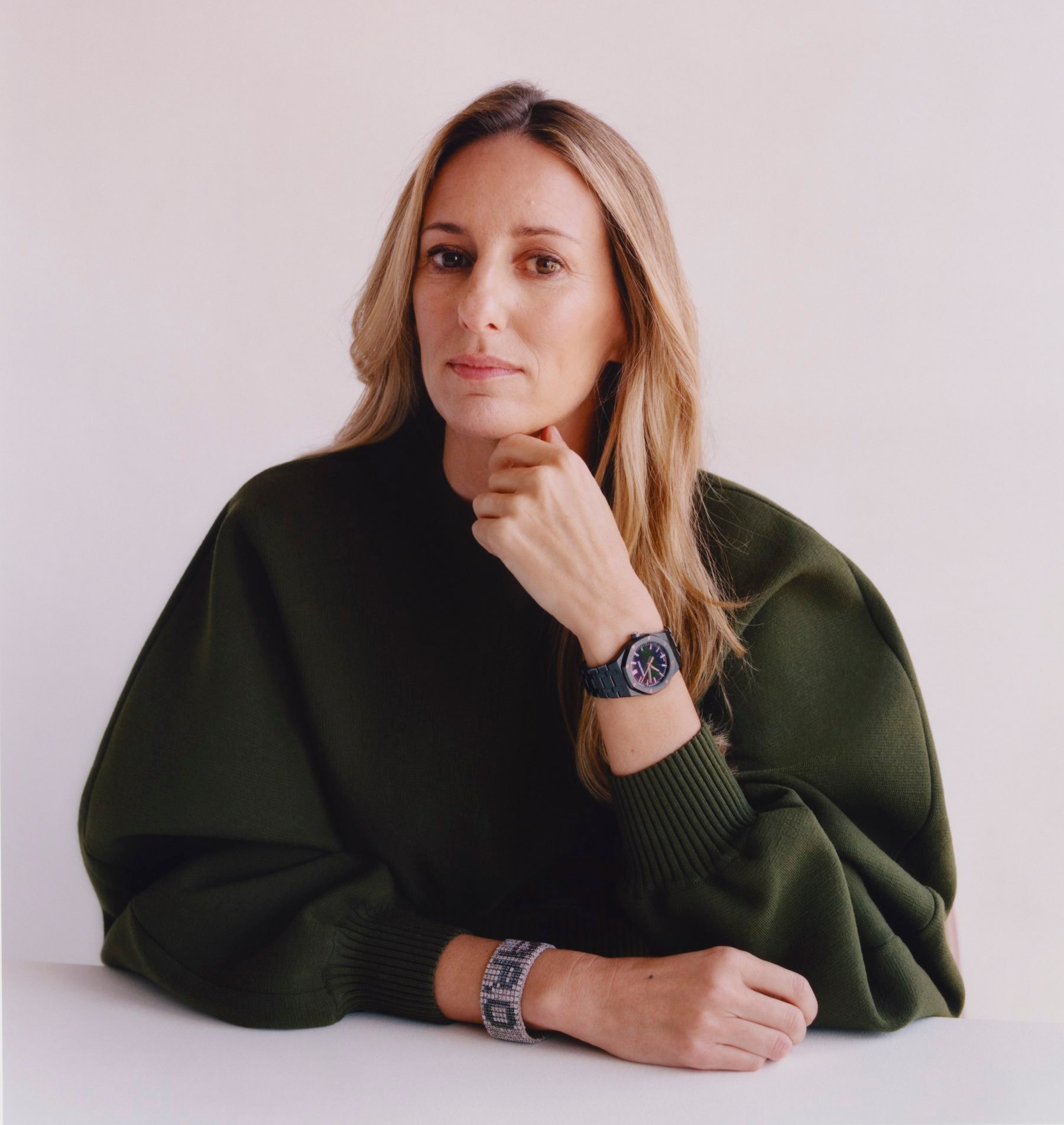 “I wanted to place a rainbow in the most unexpected of places, a little like when you see oil floating on a puddle in a city street…” says Bucci, resisting to follow suit on the rainbow hype in the watch world. “So here you have every color of the spectrum on a canvas that is completely black, which is itself the absence of color.”

This unique dial displays the hours, minutes, seconds, and date at 3 o’clock. It features pink gold indices and Royal Oak hands with a luminescent coating. Surrounding them are eight hexagonal pink gold screws on the bezel, as well as a pink gold insert in the crown. These pink gold details stand out against the black ceramic case and bracelet for an exquisite contrast. In addition, polished chamfers on the case and bracelet bring a level of dynamism to the vertically brushed components. 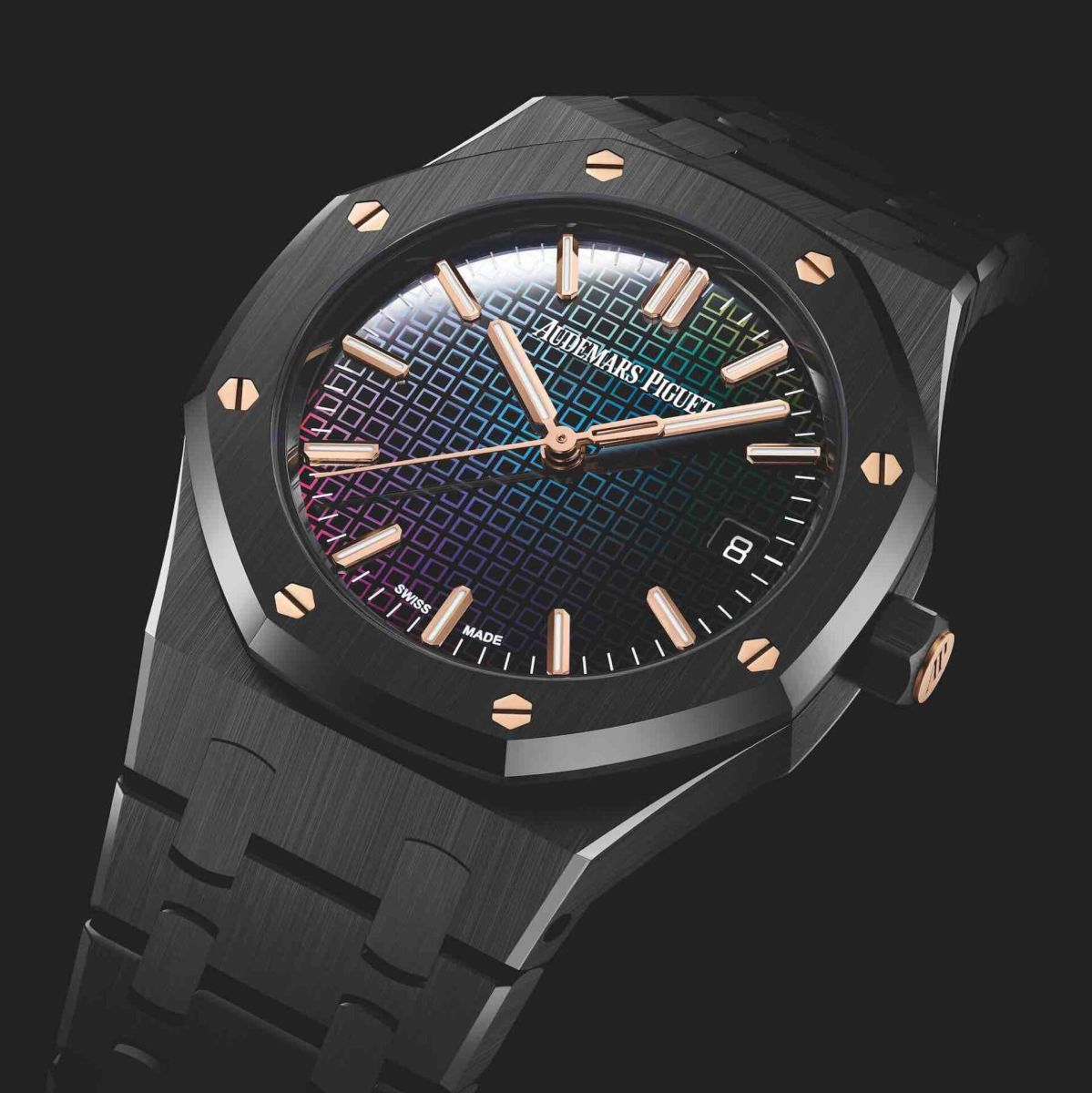 Visible through the glare-proofed sapphire crystal on the back of the case is the automatic caliber 5800, a product of high-end movement manufacture Vaucher. This ultra-slim automatic movement (23.3mm × 3.9mm) is a fitting choice for the 34mm Royal Oak with a case thickness of 8.8mm – the new caliber would have been too large. Caliber 5800 also beats with a 28,800vph (4Hz) frequency and offers a respectable 50-hour power reserve. 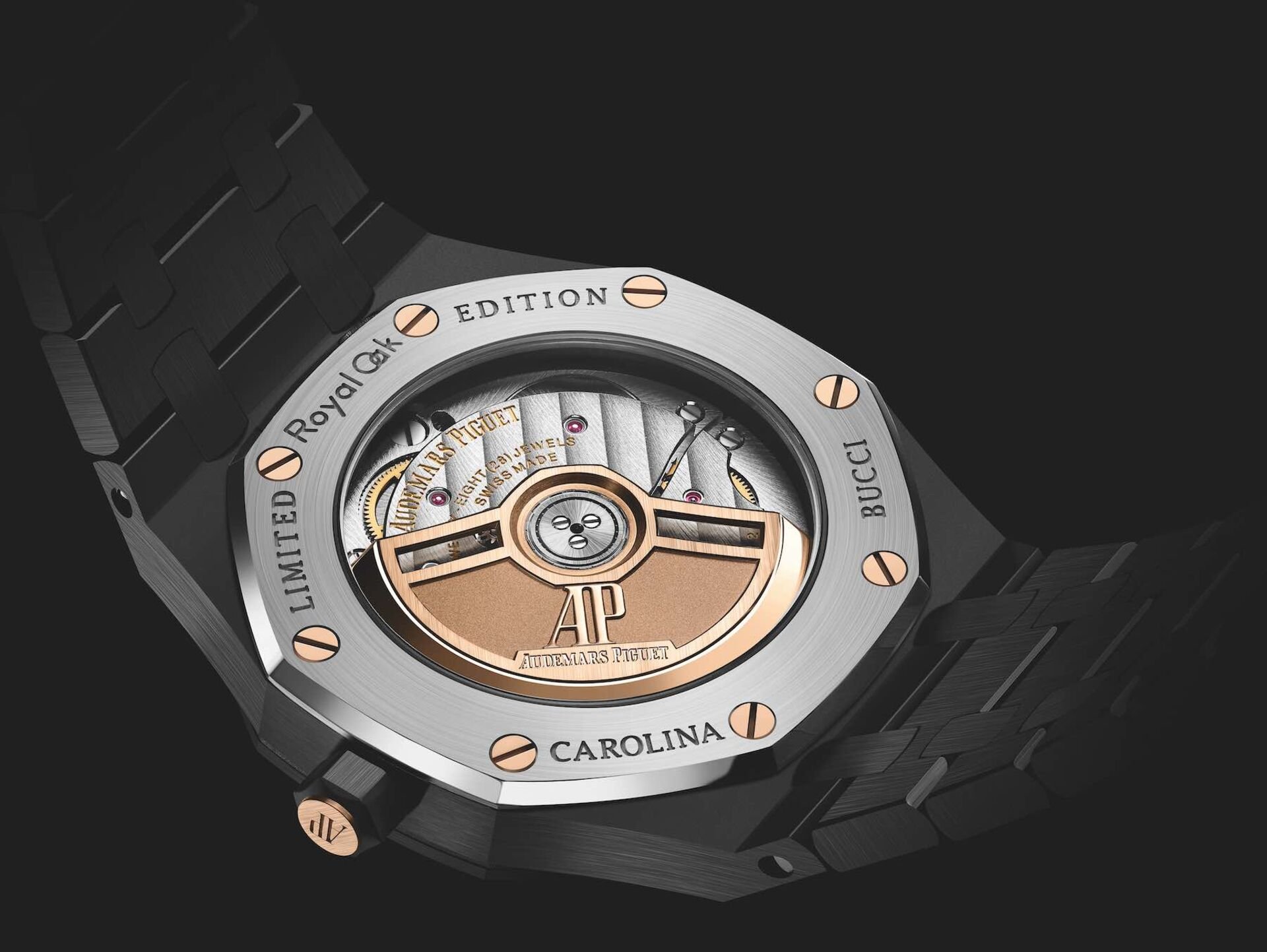 The bridges display Côtes de Genève decoration, and a 22K pink gold rotor tops the caliber off. Unlike the 50th-anniversary models, yet following in the footsteps of the debut model last year, the oscillating weight features the AP logo. This pink gold element is finished with a microbead-blasted plate, brushed edges, and polished bevels. On the surround are eight round pink gold screws affixing the titanium ring to the ceramic case. The inscriptions read “Royal Oak Limited Edition” and “Carolina Bucci” but not an individual serial number. 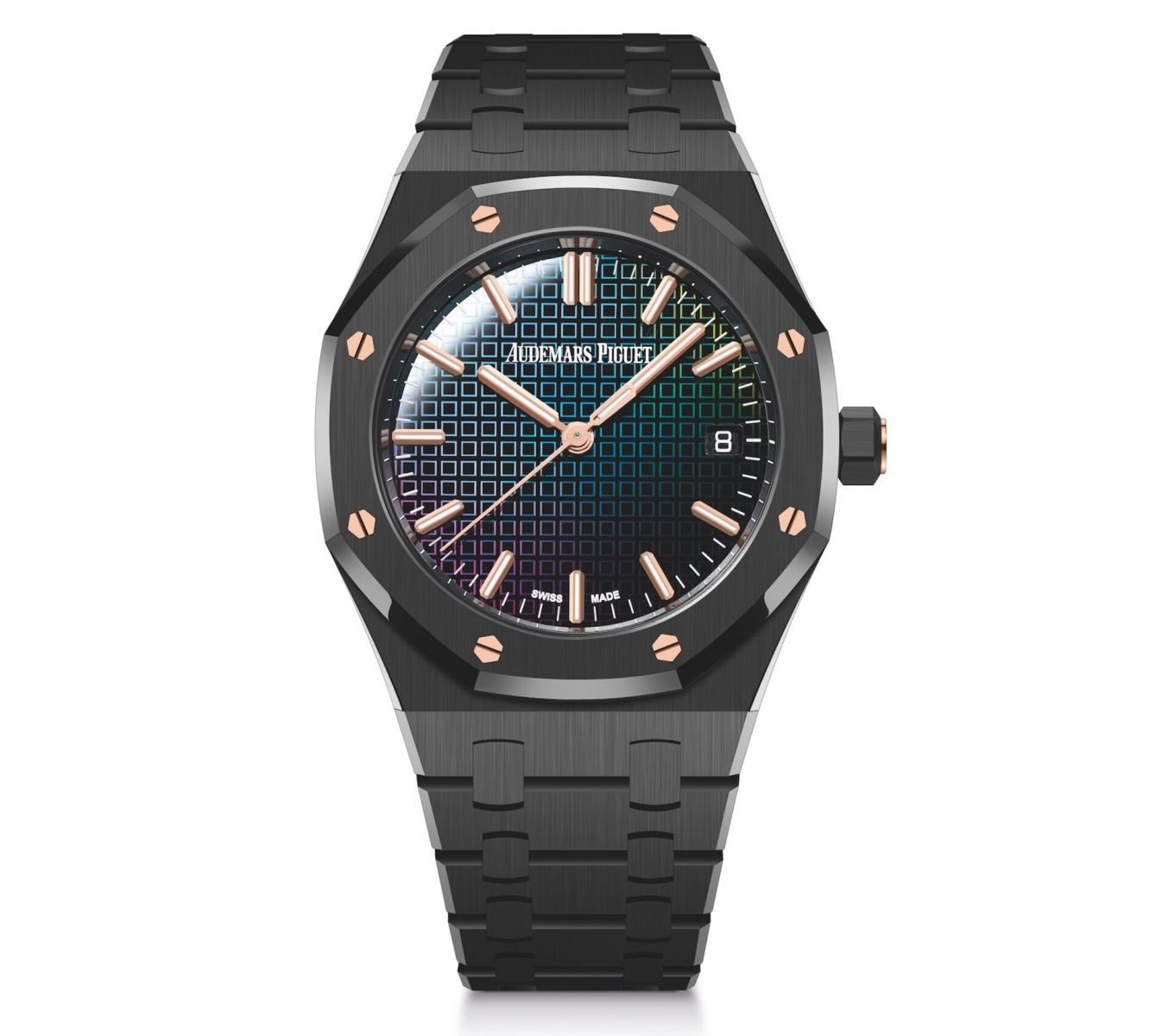 The Royal Oak Selfwinding 34mm black ceramic is a high-spec watch with strong character, but it’s fairly non-technical for most women. I love the Carolina Bucci variant, as well as its predecessors, for that matter. I smirked inside, thinking that brands were finally getting their act together with their women’s offerings. Then I read that AP is touting the new model as a “genderless timepiece”, stating, “this limited edition is designed for both men and women.” 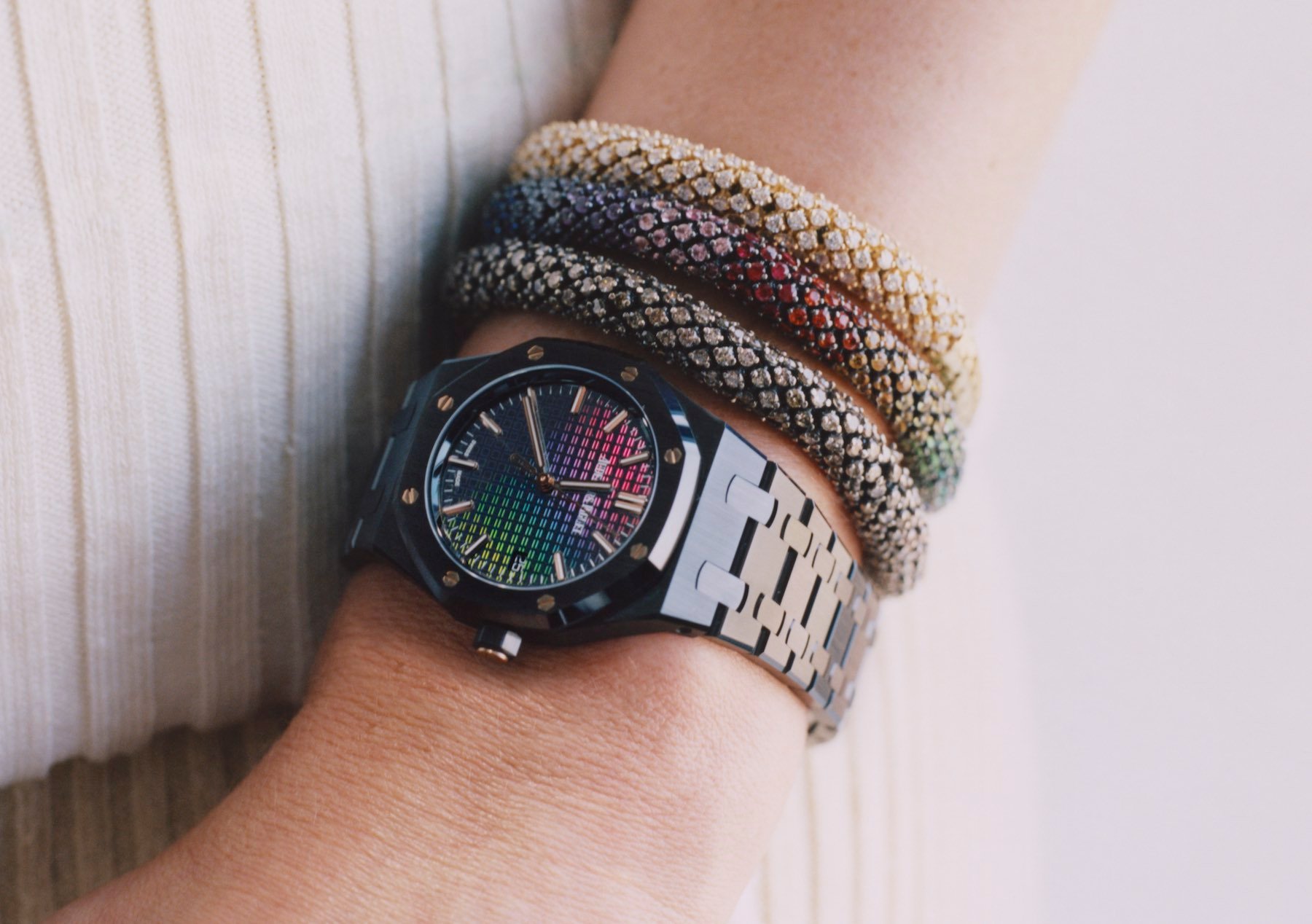 Hold on a second. AP just published “Creativity By And For Women” on its website the same day as the news release of this model. For those unfamiliar with Carolina Bucci, she is the fourth generation of a Florentine jewelry family with a rich heritage. Her Haute Joaillerie and AP’s Haute Horlogerie make a fine crossbreed. Bucci herself confessed she imagined this watch for women. Surely, her female-forward designs would help engage the modern female clientele with serious watches made with them in mind.

I wish AP would stick to its own story. A watch designed for women is good enough for men, and in this case, that’s especially true. There is no need to retract the truth and spin it both ways. And don’t get me wrong. I straddle above “genderless” comfortably. I wear men’s watches day in and day out. I’d like to think that we’ve progressed enough that a self-assured modern man would buy or wear a watch created by a woman just because it suits him. But maybe that’s being too idealistic? Tell us your thoughts either way.