Twenty years ago, Audemars Piguet introduced the first Royal Oak Concept, an extreme-looking watch (both then and today) made of Alacrite 602 and titanium. Alacrite is a lightweight alloy mainly used in the aeronautical industry. Not only was the design extreme, but the movement inside was also rather special. Besides a tourbillon, the Royal Oak Concept from 2002 also featured a Dymograph. The Dymograph indicates the torque of the mainspring at that particular moment. 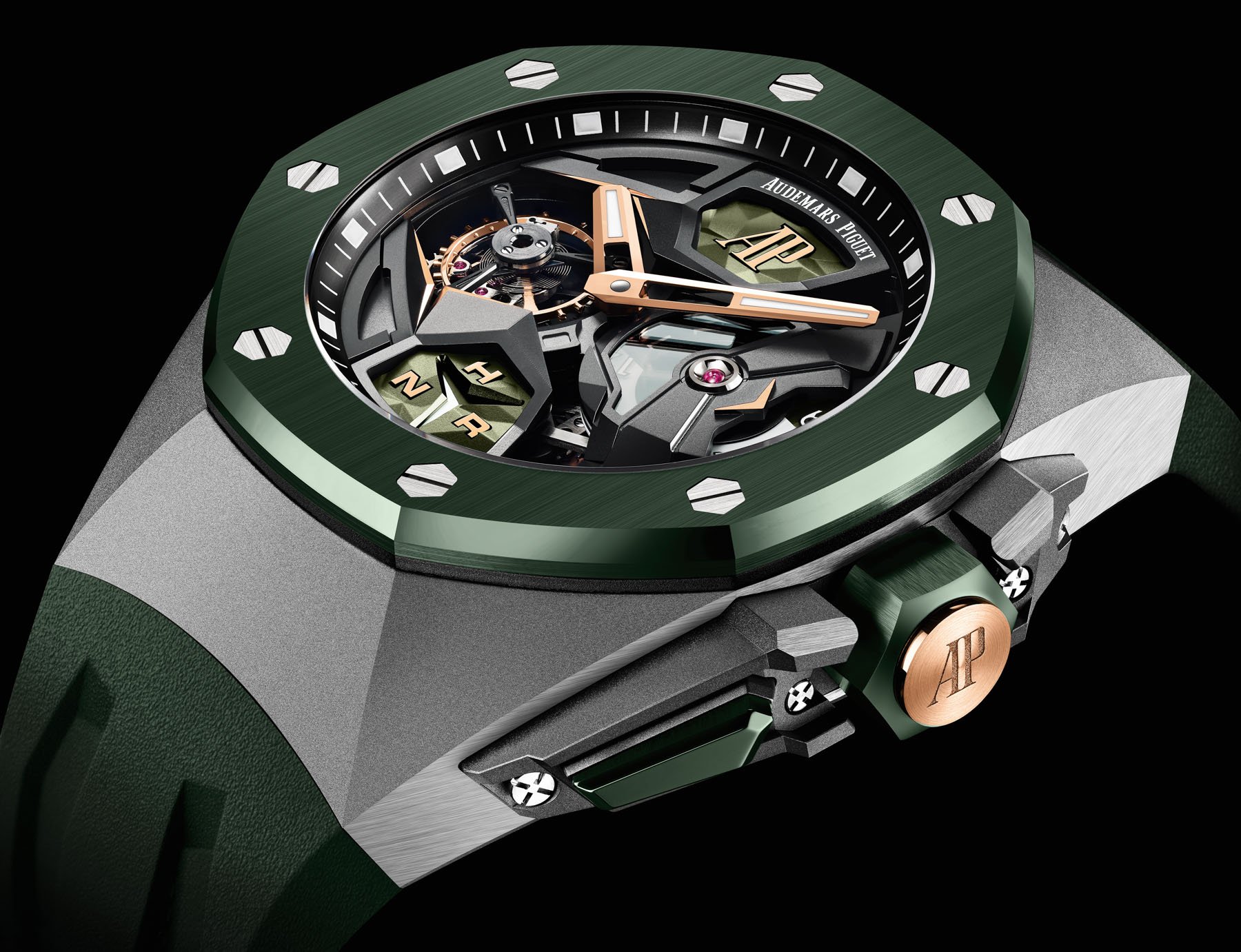 The large and complex case is made of titanium, but this time, it is enrichened by a beautiful green ceramic bezel. Camo-style green can also be found on the dial, but more about the movement and skeletonized dial later. 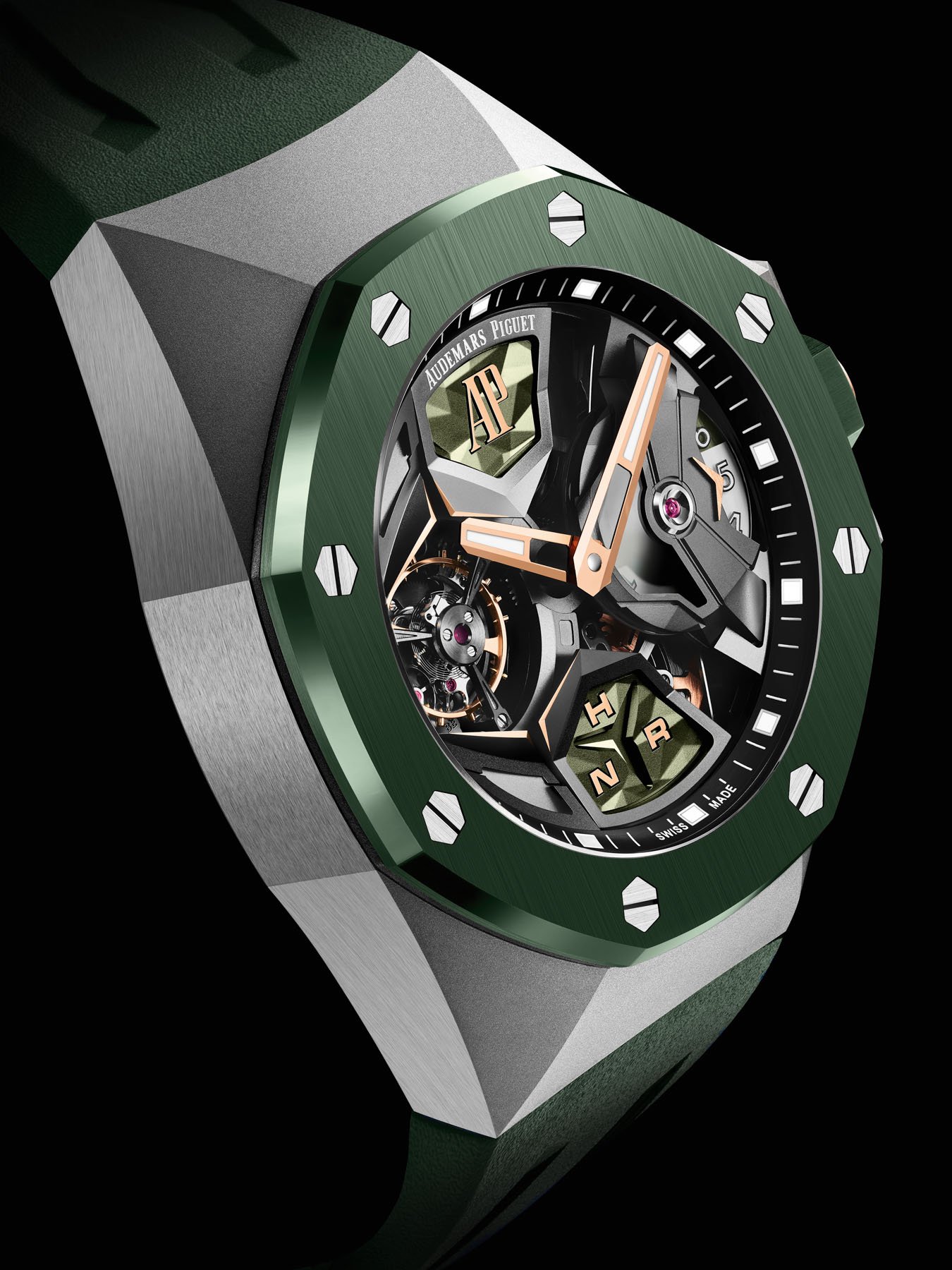 What makes the use of ceramic so incredibly nice on this Royal Oak Concept Flying Tourbillon GMT (but also on the recently introduced blue Royal Oak Perpetual Calendar Ref. 26579CS that we wrote about here) is that the finishing is identical to that of the steel and precious-metal Royal Oak models. It’s all finished by hand, something that perhaps contrasts a bit with the use of “modern” material like ceramic. 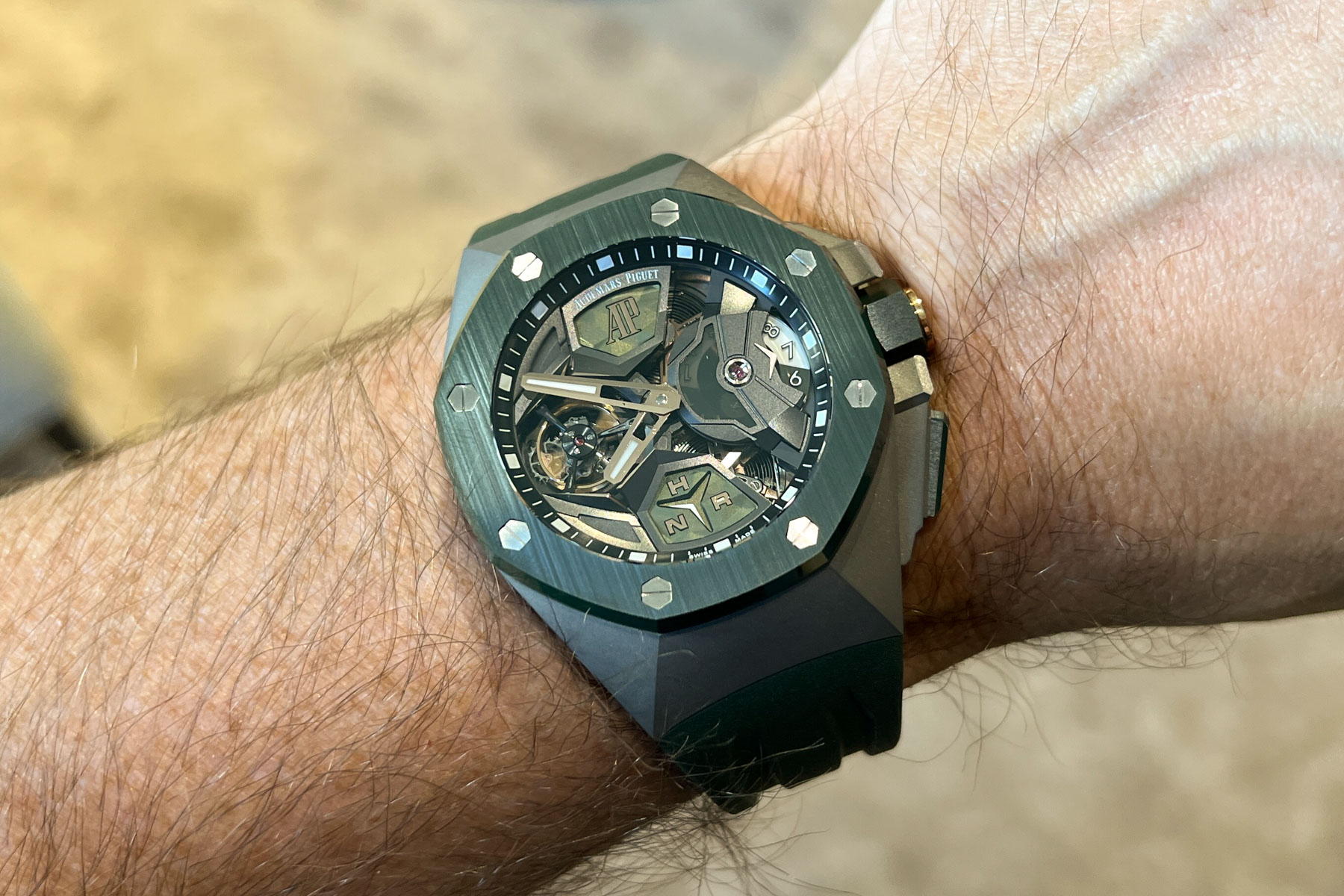 The green ceramic (ZrO2) consists of secret ingredients, but AP lets us know that the ceramic components only get this deep green color once they have been sintered at more than 1,400°C. Getting the right color and consistently doing so is not an easy task. The secret composition of the materials and the specific sintering temperatures are of the essence here. 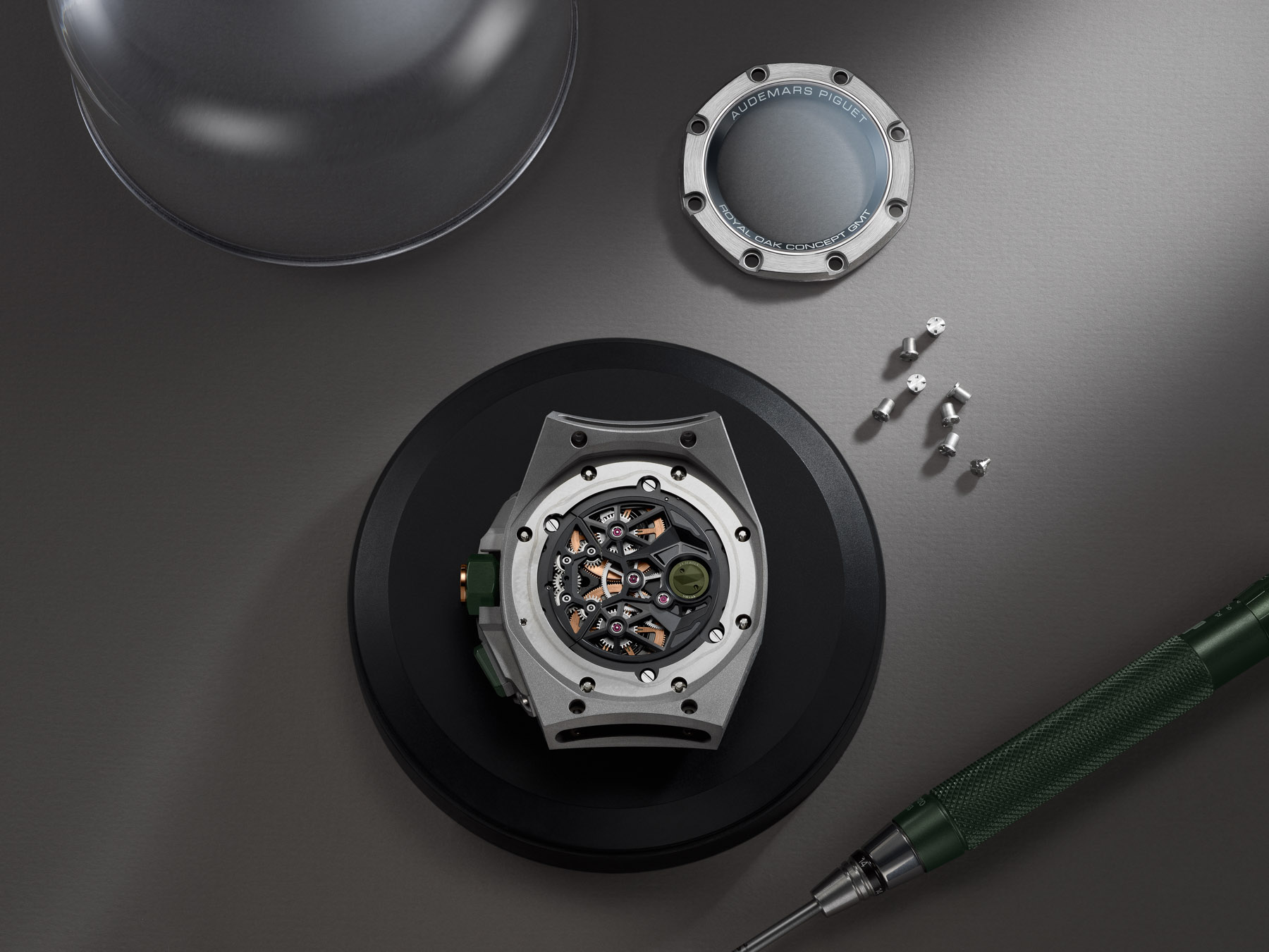 Caliber 2954 at the heart of the watch can be admired from both sides thanks to the skeletonized dial. The movement has been designed with black PVD-treated bridges and green-colored inserts, which are achieved through a Chemical Vapor Deposition process that adds a thin green layer to the parts. The green components of the dial match nicely with the green ceramic bezel and, of course, the green rubber strap. 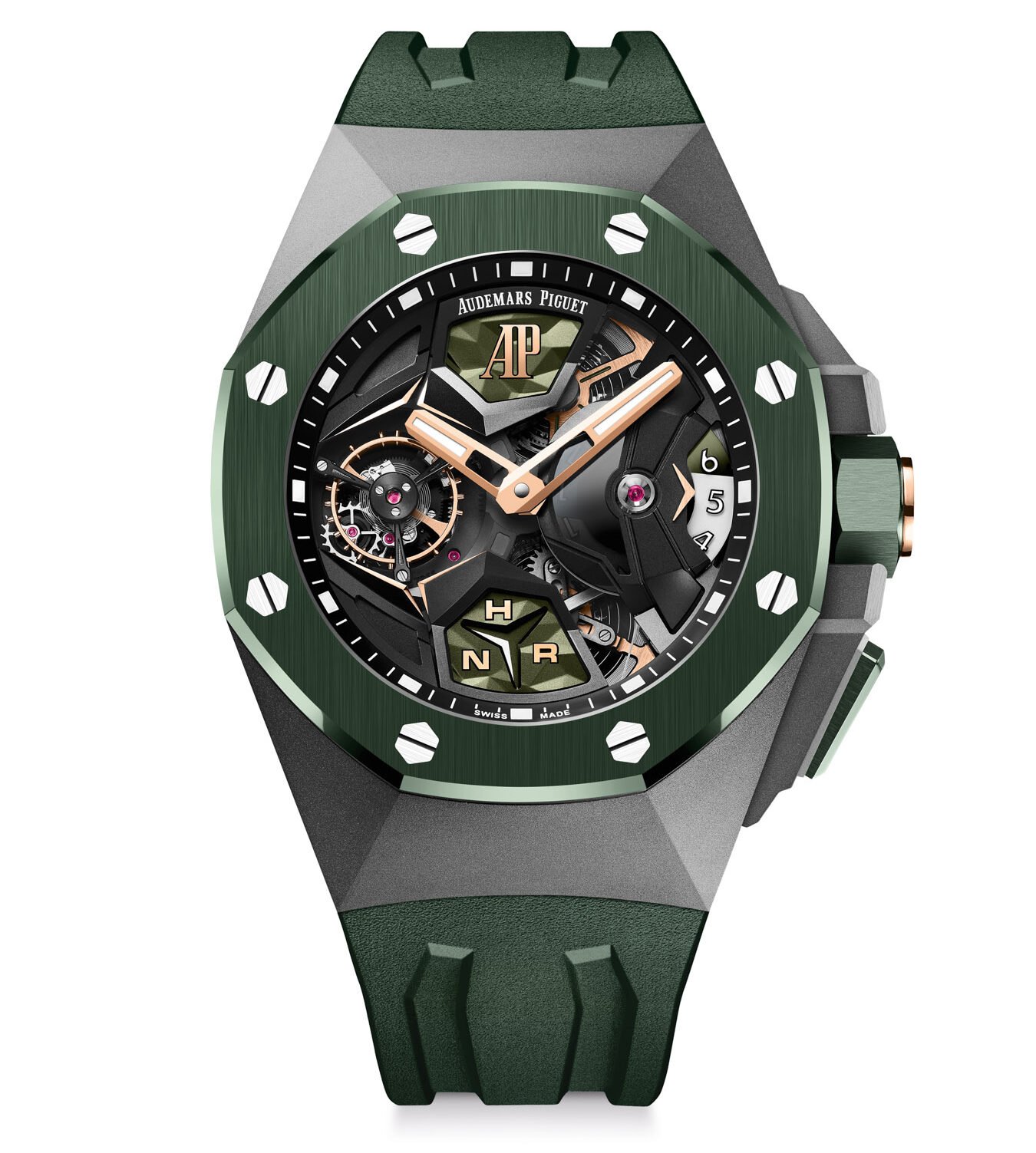 The hand-wound AP caliber 2954 features a flying tourbillon and a second-timezone (GMT) function. At 6 o’clock on the dial, you will find the letters H (setting the time), N (neutral), and R (winding the movement). We’ve seen this before (including on watches from other brands like Grönefeld), but it remains a useful and attractive feature. 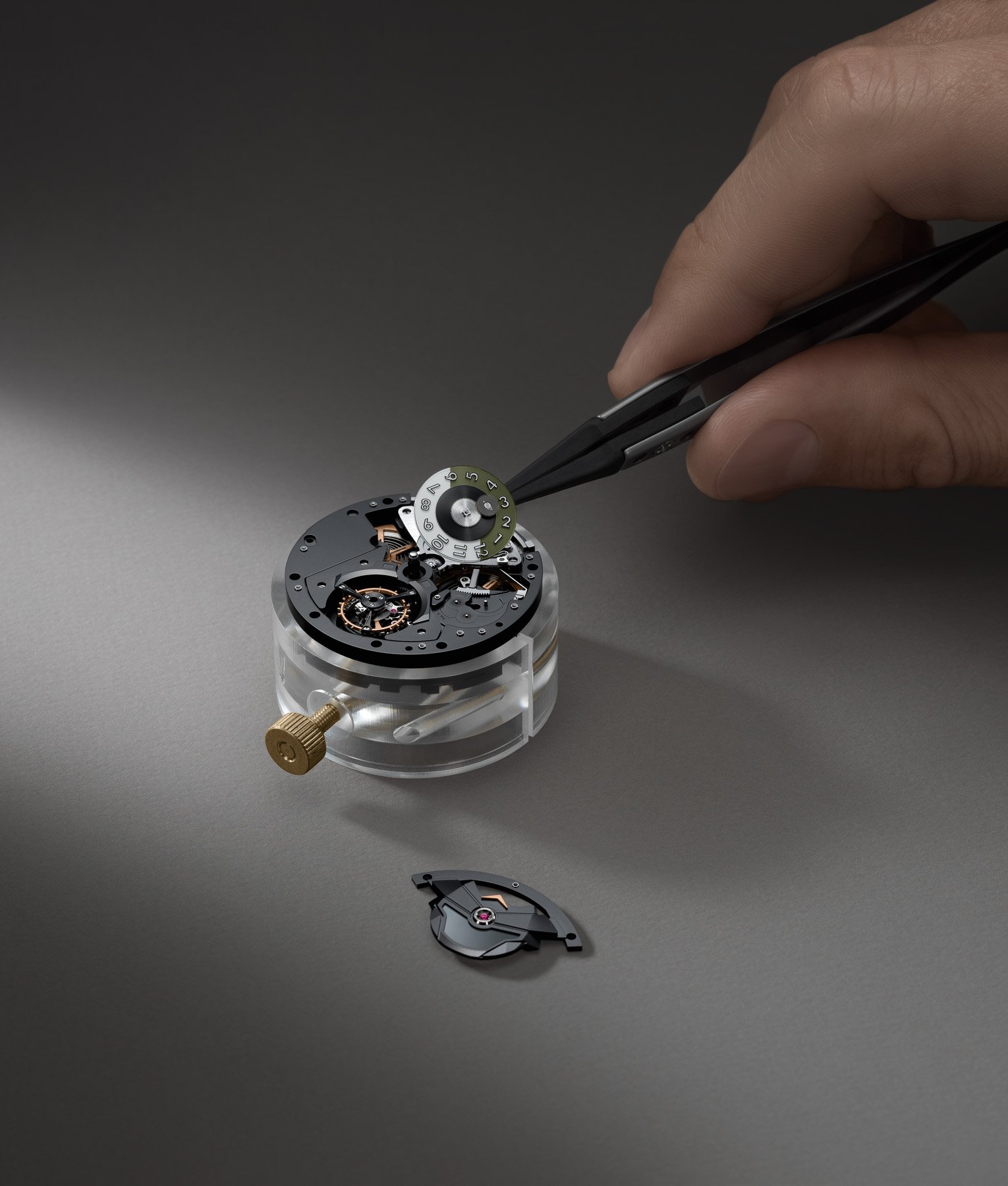 Two discs for the second timezone

With the green pusher at 4 o’clock, you advance the hour hand. At 3 o’clock, you will find the second-timezone display that consists of two discs. One is sapphire with the numerals for the hours, and it rotates once every 12 hours. An additional day/night disc rotates every 24 hours, indicating daytime in white and nighttime in green. 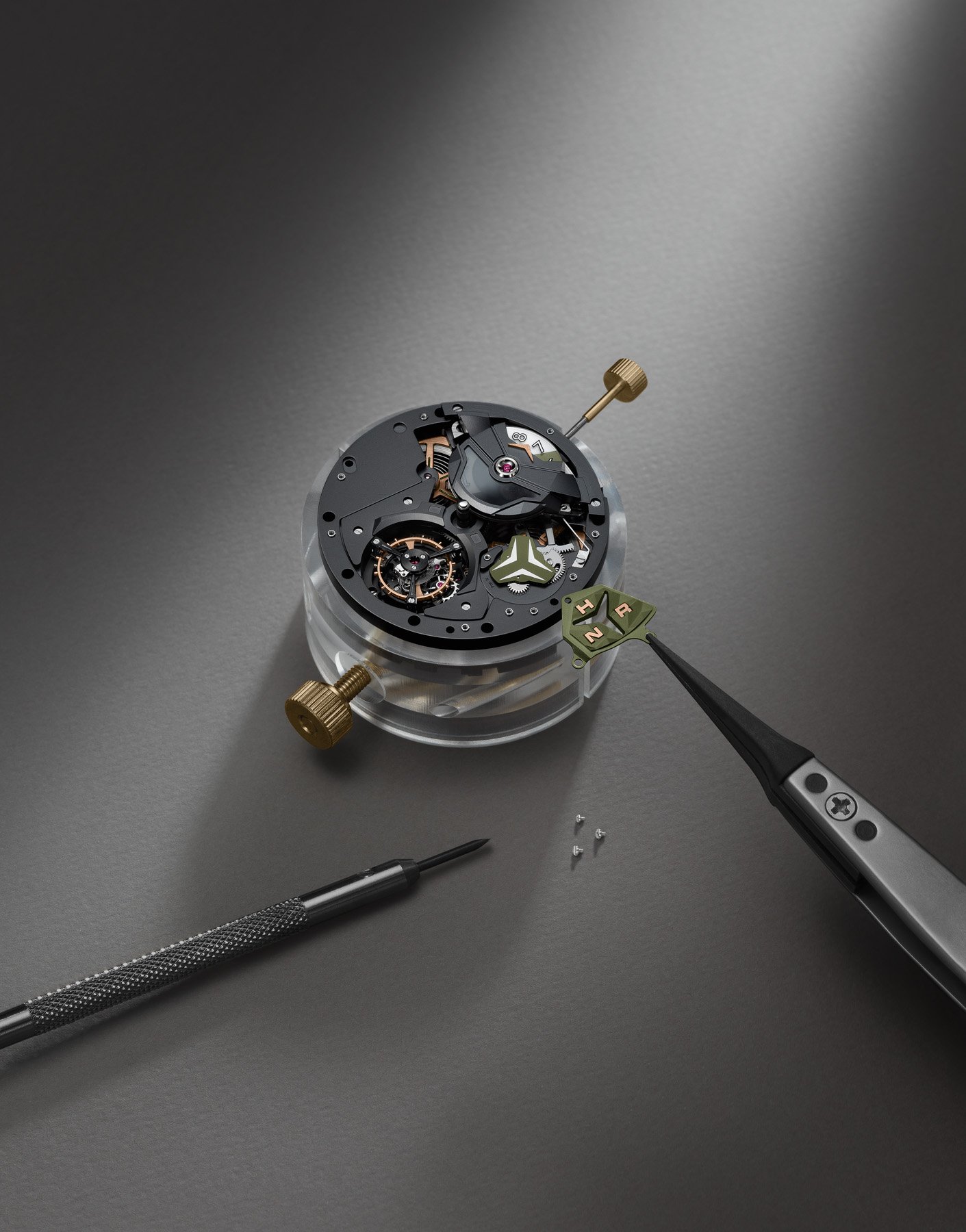 Lastly, the AP caliber 2954 has two barrels that give the watch a power reserve of approximately ten days. There’s a very clever mechanism behind this, providing a constant force for 237 hours of autonomy. The gear train gets its energy from the double barrels at exactly the same time using a clever mechanism. This solution reduces pressure in the gearing and friction in the barrels and increases precision, power reserve, and reliability.

To complement the green and black design elements of the watch and movement, Audemars Piguet decided to use pink gold for the hands, the applied AP logo at 12 o’clock, and the flying tourbillon cage. The green crown has a pink gold insert as well. 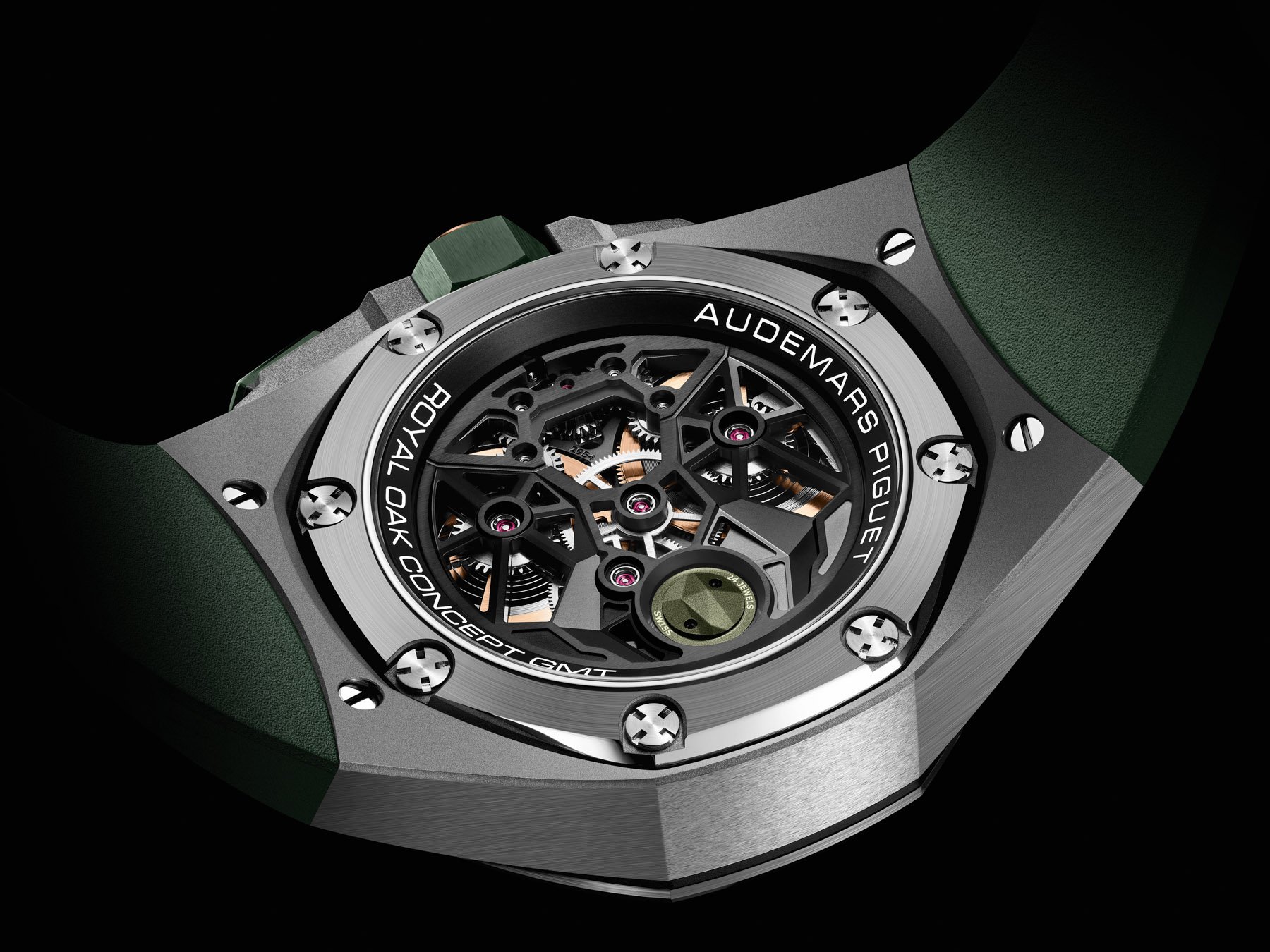 Although the name might suggest otherwise, AP’s Royal Oak Concept watches are available to customers. They come at a high price point, but that’s what you have to accept when you want to be at the forefront of groundbreaking watches, I guess. Over the last 20 years, I have come across a handful of Royal Oak Concept watches “in the flesh”, and they always made a lasting impression on me. They are so out of the ordinary that you won’t quickly forget about these special Audemars Piguet watches.