How Watches Work: A Brief History Of Automatons And Their Relationship With Mechanical Watches

Automatons, or automata, have amazed human audiences for over two thousand years.  Designed by humans to mimic living beings, automata’s lifelike movements have fascinated everyone, from ancient royalty and medieval city-dwellers to 18th-century courtiers and modern-day museum visitors. What people may not realize, however, is just how closely related horology and automata really are.

In fact, automata and clocks have developed side-by-side for millennia. Like clocks, many of the world’s finest automata employ incredibly elaborate mechanisms. However, understanding the most basic components that they share can help to demystify how they work. With this understanding, we’ll be able to see the striking similarities between these early robot ancestors and the ticking timepieces we love so much. One could write volumes on automata, their history, their many different shapes and designs, and how they function. I’m afraid we don’t have time for that today. I do hope, however, that this very brief overview will both intrigue and educate you as much as my research for it fascinated me. 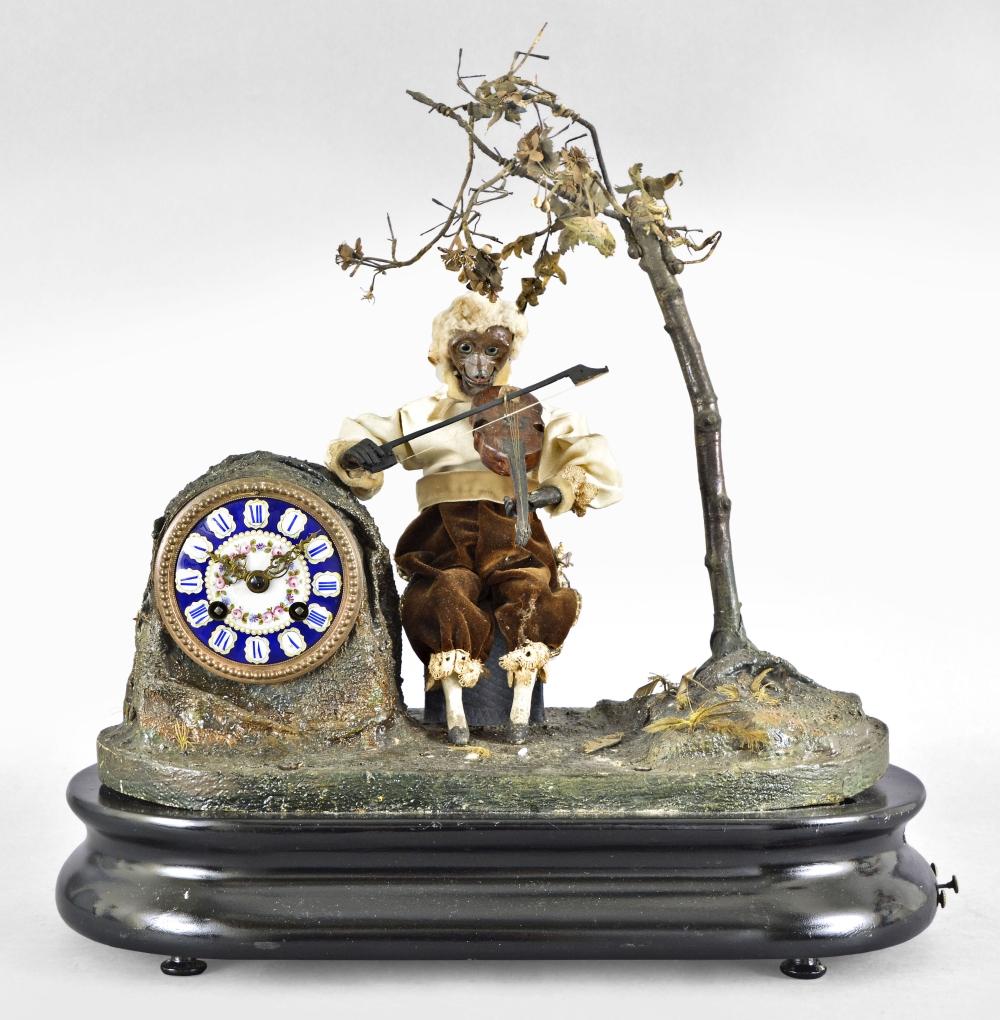 The word “automaton” comes from ancient Greek, meaning “acting of itself.” Greek mythology contains many early tales of automata. One of the oldest of these, dating back to around 700 BCE, is the myth of Talos. According to the myth, Talos was built by Hephaestus, the Greek god of blacksmithing and other artisanal crafts. A bronze humanoid machine and protector of Crete, Talos circled the island three times a day, throwing boulders at approaching invaders. But while myths are myths, Ctesibius, a Greek inventor who lived from 285-222 BCE, actually created several water-powered clocks and automata. Ctesibius was the inventor of the first-ever cuckoo clock at the Library of Alexandria. Greek inventors like Ctesibius continued producing hydro-powered automata for hundreds of years, many of which were inspired by nature and animals. These automata not only mimicked animals in form and movement but in the sounds that they made as well.

By the mid-700s CE, Muslim inventors were creating wind-powered automata. Over the next half-millennium, these would take the shape of animals, plants, and even humans. Perhaps the most prolific Muslim automaton maker was Ismail al-Jazari. He lived from 1136-1206 CE and was an undisputed genius of science and mechanics. Like the Greeks, al-Jazari used water to power many of his inventions. Among his many mechanical creations was one known as the “musical boat.” 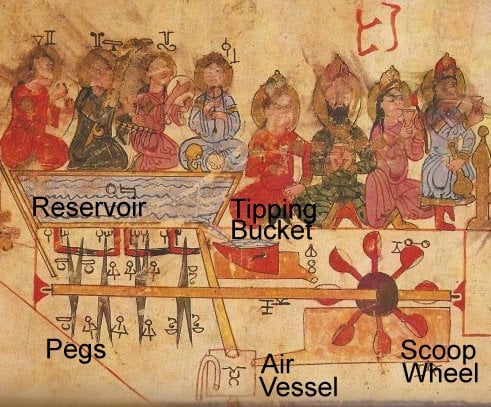 The device featured four musician figurines with moving arms that could “play” drums, a harp, and a flute-like instrument. Water from the reservoir traveled down a tube connected to an air vessel, which produced the whistling sound of the flute. Additionally, more water flowed into a tipping bucket. The bucket emptied the water onto a scoop wheel connected to a long shaft. As water weighed down the scoops, the shaft rotated. Pegs sat on the other side of the shaft. Rotating with it, the pegs pushing against levers connected to the figurines’ arms. The spacing of the pegs determined the frequency of the arm movements, producing different musical rhythms. This peg system was an early version of one of al-Jazari’s most important contributions to mechanics — the cam.

What is a cam, and how does it work?

Even if you don’t know much about mechanics, as a watch lover, you’ve likely heard of a “cam lever chronograph”. These days, cams are some of the most widely-used components in machinery across all industries. Let’s look at how they function.

Cams are pieces of metal (or wood, in the olden days) that have an off-center rotation point. They can be either perfectly circular or irregularly shaped. Cams can attach to a long shaft, like in al-Jazari’s boat, or to a short pivot. As a cam rotates, a follower travels around its edge. The shape of the cam determines the movement of the follower. In the example above, you can see what I mean. As the follower travels around the circular cam, for example, it pulses up and down in a regular motion. By contrast, the follower traveling around the heart cam produces an irregular hammering motion. While both the pear and drop cams cause the followers to gradually rise, the rate at which they fall depends on the cam’s shape. In this case, cams turn lateral/horizontal motion into linear/vertical motion. 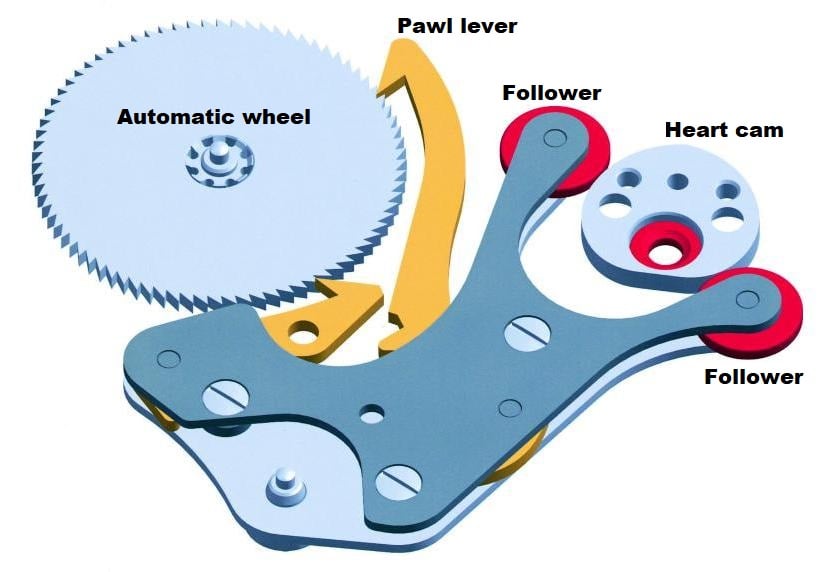 Cams can also transfer lateral motion to other laterally moving parts. In the diagram of the IWC Pellaton automatic winding system above, you’ll notice a heart cam. The automatic rotor (not pictured) connects to the ruby-lined hole in that cam. As the rotor spins, the heart cam rotates. The ruby followers transfer the motion of the cam to the two yellow pawl levers, which climb up the automatic wheel. You can see it in action in this video. The automatic wheel engages with the (not-pictured) crown wheel, which turns the ratchet wheel and winds the mainspring. Pretty cool, right?

The beautiful thing about cams is that they can literally be shaped in any way one could imagine. Their shape serves as a type of memory, allowing steps in a programmed sequence. When stacked upon other cams and connected to levers, they can be used to create long, highly complex, and natural-looking series of movements. The invention of cams was absolutely critical to the development of automata. Their makers studied human and animal movements, translating them into different cam shapes, seemingly bringing automata to life. 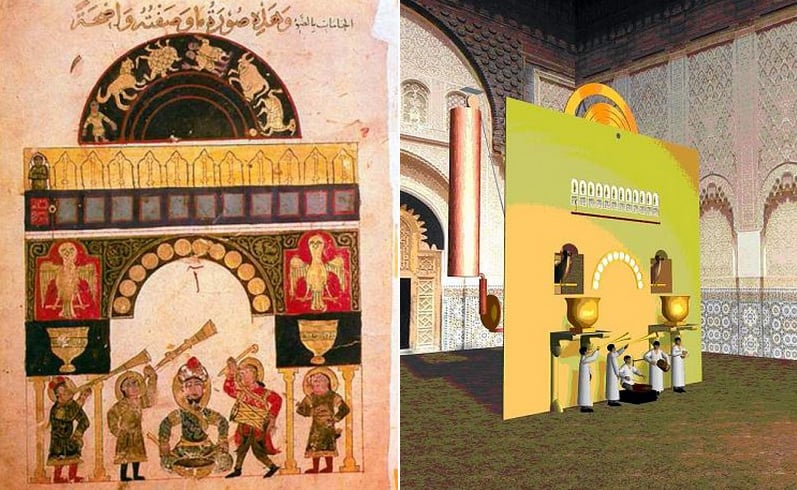 Throughout history, many who excelled in making automata were also masters of timekeeping. Al-Jazari himself was known for his amazing water clocks that were both artistically beautiful and mechanically sophisticated. His astounding Castle Clock, the function of which is shown in great detail in this five-and-a-half-minute video, featured five musician automata. Though he was not the first person in history to do so, al-Jazari even developed his own hydro-powered escapement mechanism, which controlled the rate at which wheels turned and transmitted energy. The escapement inside a mechanical watch does the same job, controlling the speed at which energy from the mainspring passes through clockwork gears.

Clockwork, the use of toothed gear wheels and an energy source to power a device, existed thousands of years ago. Ctesibius, the creator of the first cuckoo clock, used geared wheels in his water clocks. Like Ctesibius, the oldest surviving clockwork mechanism, the Antikythera, also hails from Greece. For some reason, however, much of the sophistication in Greek mechanical clockwork disappeared for centuries in Europe. It emerged slowly but surely in China and the Middle East first, spreading to Europe after the Crusades. In the 13th century, clockmakers in Europe developed the earliest-known mechanical escapement, the verge escapement. By the 14th century CE, the world finally began to see clockwork as sophisticated as it had been in ancient Greek times. Clocks evolved, and automata did too. As medieval cities flourished in Europe, governments placed elaborate mechanical clock towers with automata at their centers, bringing order and uniformity to their societies. 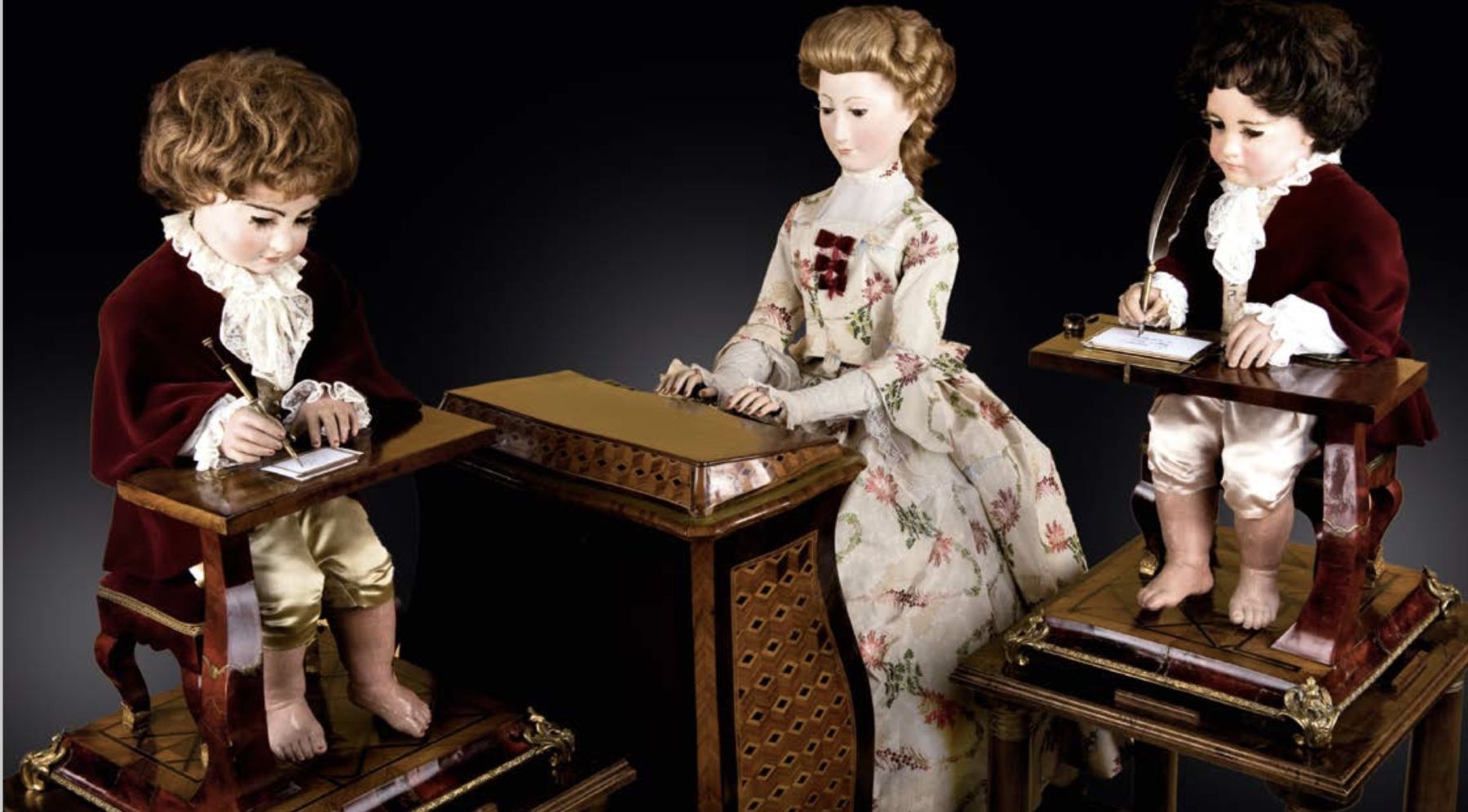 The automata of Jaquet Droz

In Europe, automata transformed from public novelties to highly exclusive devices made to entertain the rich. Horologists were not part of the socially elite classes meant to view these spectacles. Nevertheless, their brilliance and ingenuity were required to meet the demand. One Swiss watchmaker to specialize in automata, whose name still lives on today, was Pierre Jaquet Droz. In the 1770s, he developed some of the most fascinating humanoid automata that still exist today — the Draughtsman, The Musician, and The Writer. While their exteriors differed from watches, the fundamental principles governing their mechanics were the same. These automata were mechanical marvels that, like watches, came to life through ratchets, mainsprings, gear wheels, escapements, and cams. 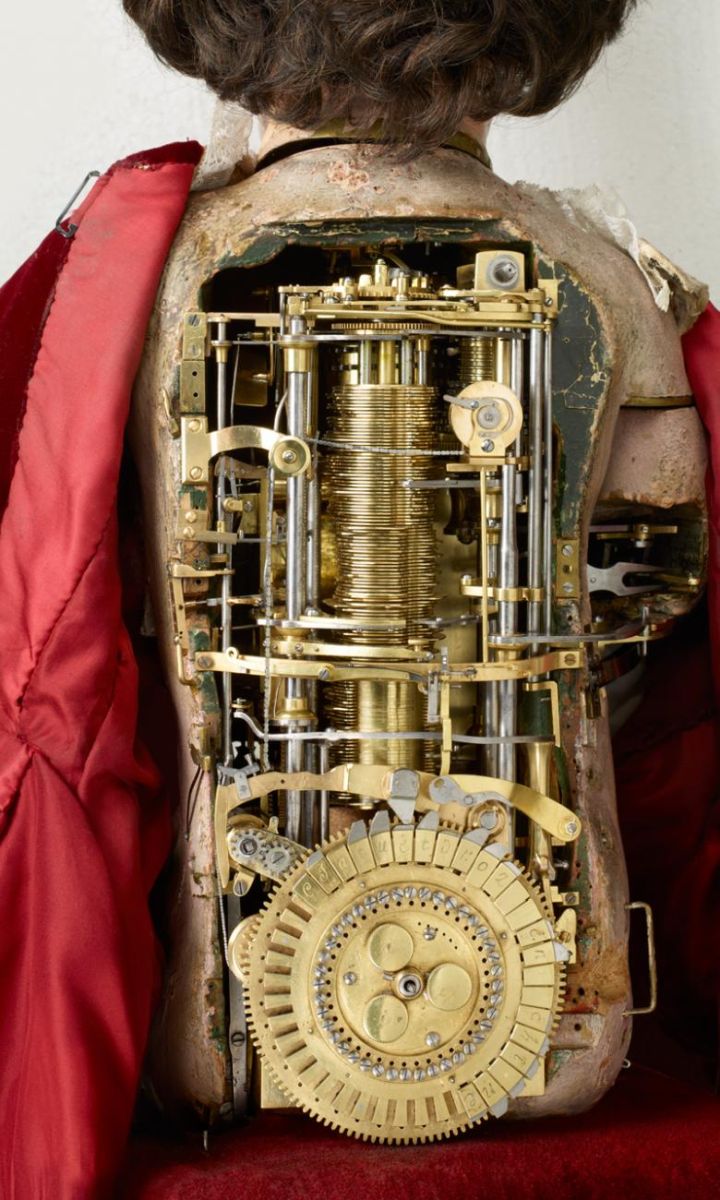 The inside of The Writer. Image credit: Houseofswitzerland.org

The Draughtsman could draw four different pictures. The Musician could play five different songs on a real organ. But perhaps the most impressive was The Writer. Inside its body were over 6,000 components. His “spine” was made of dozens of cams stacked on top of each other. Once powered up through a crank, three cam followers traveled along the cams’ edges. The followers read the cams’ shape, converting it into movement of the boy’s arm and eyes. The large gear wheel at the base of the cam stack contained 40 pegs. On these pegs, one could set up to 40 letters, programming the boy to write the desired message. Of Jaquet Droz’s automata, the Writer was the only one to feature this level of custom programmability. Many today refer to The Writer as an early ancestor of the modern computer. Watch this amazing automaton in action here. 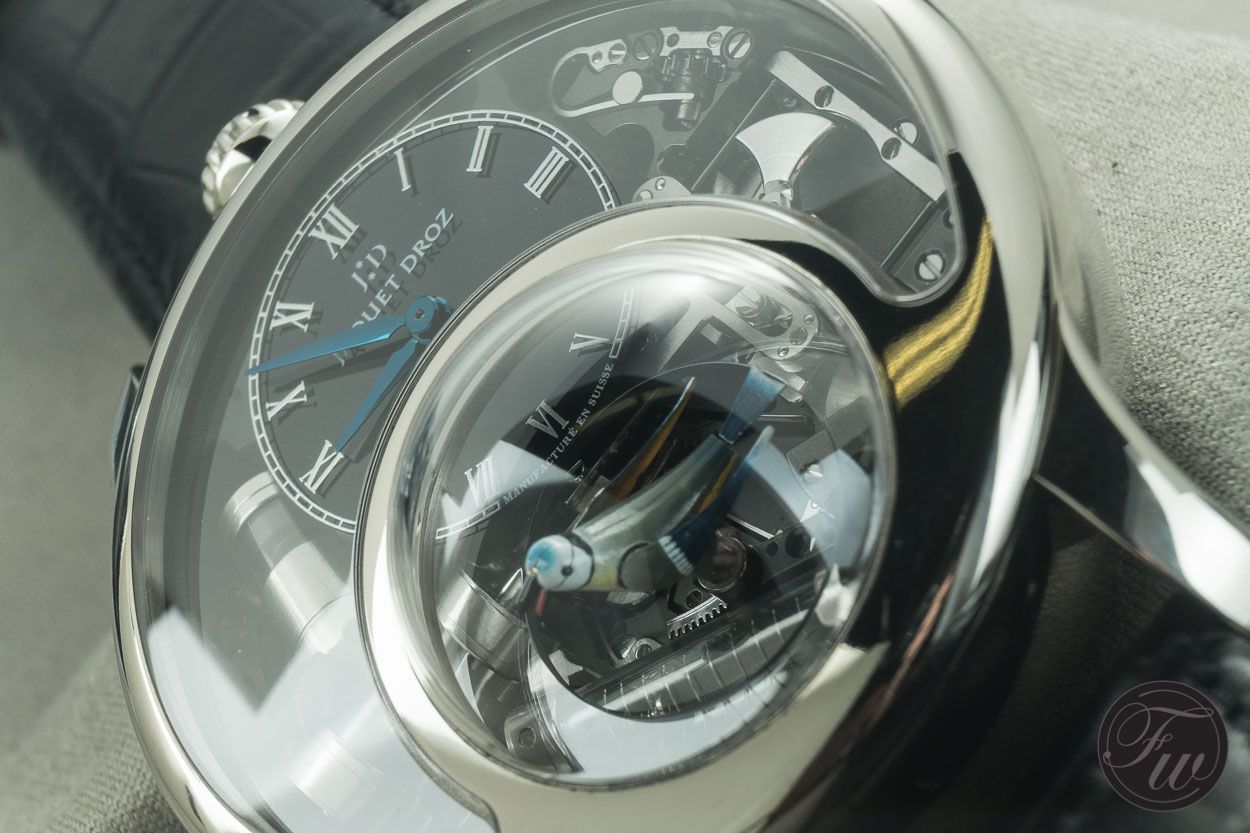 In 1774 and onward, Pierre Jaquet Droz traveled around the courts of Europe, exhibiting his work to the royalty of the age and promoting his wares. Jaquet Droz continued to produce watches, clocks, automata, and singing birds throughout his life, selling them to prestigious clients all over Europe and Asia. Today, the Jaquet Droz watch company carries on Pierre Jaquet Droz’s legacy. The brand is one of the very few watch manufacturers that still specialize in automata. In fact, Jaquet Droz has an entire division strictly devoted to automaton research, development, and manufacturing. These days, the brand’s brilliant automata can be found within wristwatches, such as the Charming Bird pictured above. This watch won the Mechanical Exception prize at the Grand Prix d’Horlogerie de Gèneve in 2015 and was the first wristwatch to ever feature a chirping automaton bird. See it in action here. 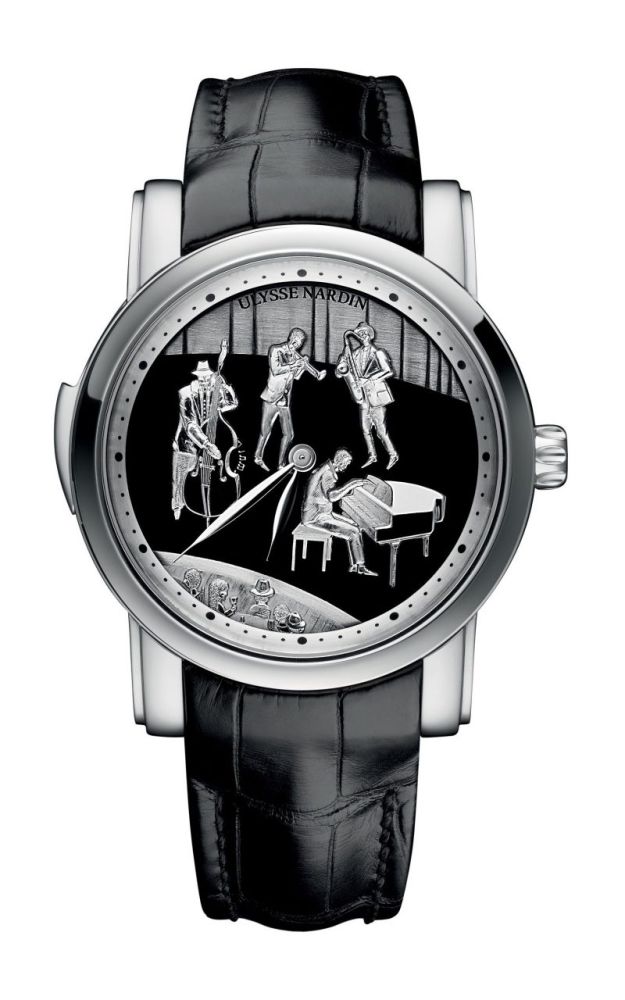 Andersen Geneve and Ulysse Nardin also produce automaton watches. Many of these tend to be on the more, shall we say, risqué side. As I don’t feel comfortable posting photos of them here, you’ll have to search for those models on your own time. But some, like the Classico Minute Repeater, are tamer, with automaton figures that “play” their instruments as the repeater mechanism chimes. 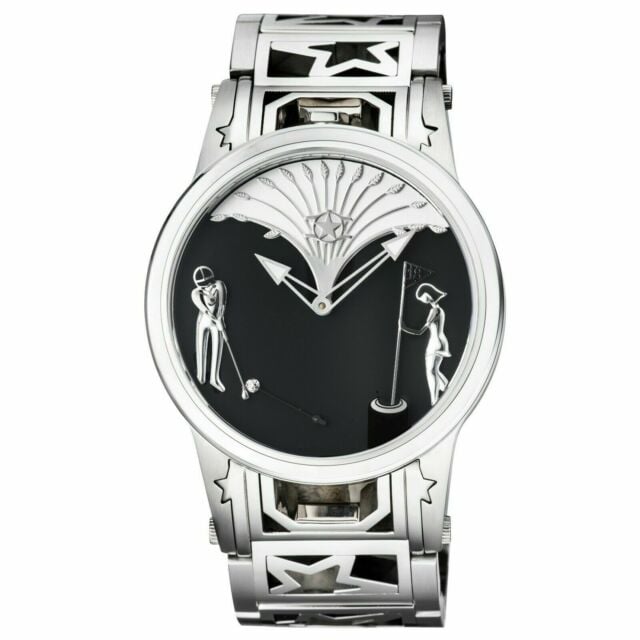 On the more “budget-friendly” end of the automaton watch market, companies like WatchStar offer value-priced automatons such as the Golf Putt. Every hour, or upon pressing the crown, the golfer strikes the ball, which flies in an arc into the hole as the woman lifts the flag out of it. 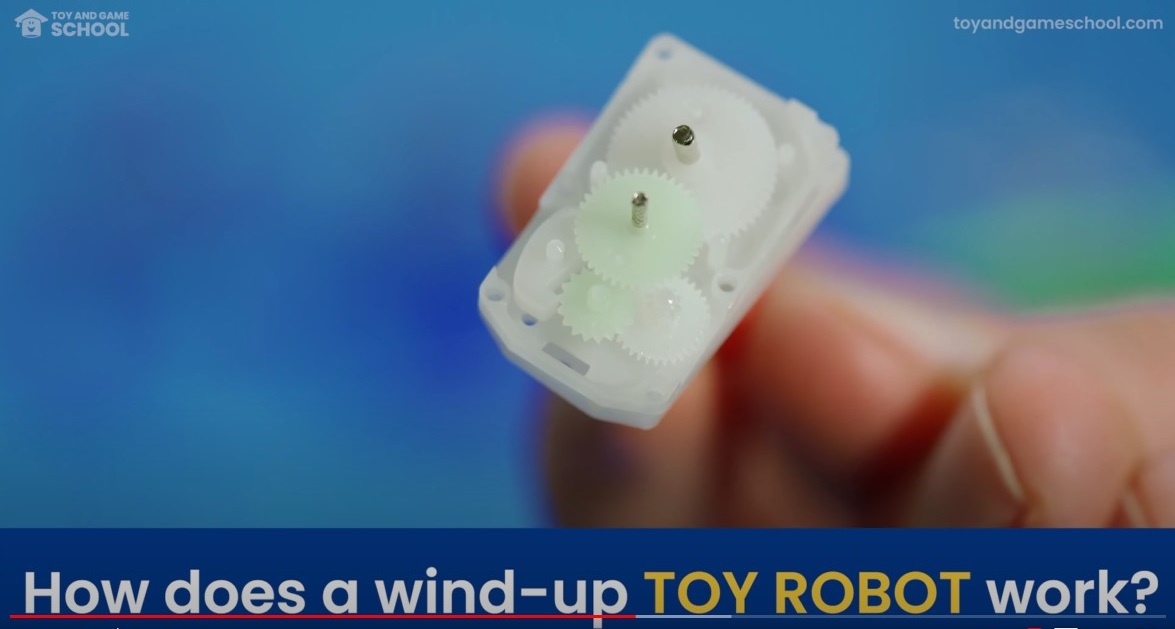 These days, one neither needs to be royalty nor have deep pockets to enjoy automata. Indeed, even simple toys, such as windup robots, use clockwork automaton technology. These toys contain mainsprings, ratchets, gear wheels, escapements, and cams, just like watches and refined, historical automatons. This less-than-two-minute video shows you each part, explaining how they work in stunning simplicity. This video even shows you how to make a very cool butterfly automaton toy out of cardboard, glue, wooden dowels, popsicle sticks, and paper clips. Any of our readers with young kids like me might find that to be a fun weekend project!

Did you learn anything today?

I certainly learned much more than I bargained for while researching for this article! Honestly, for how closely automata, clocks, and watches are related, I’m very surprised at how few automata exist on the more accessible end of the horological market today. Perhaps most manufacturers no longer find their novelty, well, novel anymore. Nonetheless, I hope you found this topic interesting!

While I have linked to quite possibly an accessive number of YouTube videos in this article, if you’re interested in learning more about the history of automata, I highly recommend this one-hour documentary by Professor Simon Schaffer of the University of Cambridge. Not only does it go into far more detail, but it shows many more examples of stunning automata than I possibly could in the space of one article. Professor Schaffer’s expertise and narrative are enthralling, so if it tickles your fancy, please give it a watch. Let us know if you liked this topic in the comments below, and we’ll see you back here soon for another installment of How Watches Work!