As we predicted in our Speedy Tuesday article from January already, Omega introduces a new Snoopy Award Speedmaster. The Omega Speedmaster Professional Silver Snoopy Award is the 45th anniversary limited edition of the Apollo XIII mission from 1970. Although we haven’t seen it in the flesh yet (Thursday morning, we will be first again), we are very excited to see what Omega made of this anniversary edition.

Although it is very different from the earlier Snoopy Award model, it is unmistakably a Speedmaster Professional. The 42mm stainless steel case now has a ceramic black tachymeter bezel though. The tachymeter scale has been applied with Super Luminova, so it will light up in the dark. 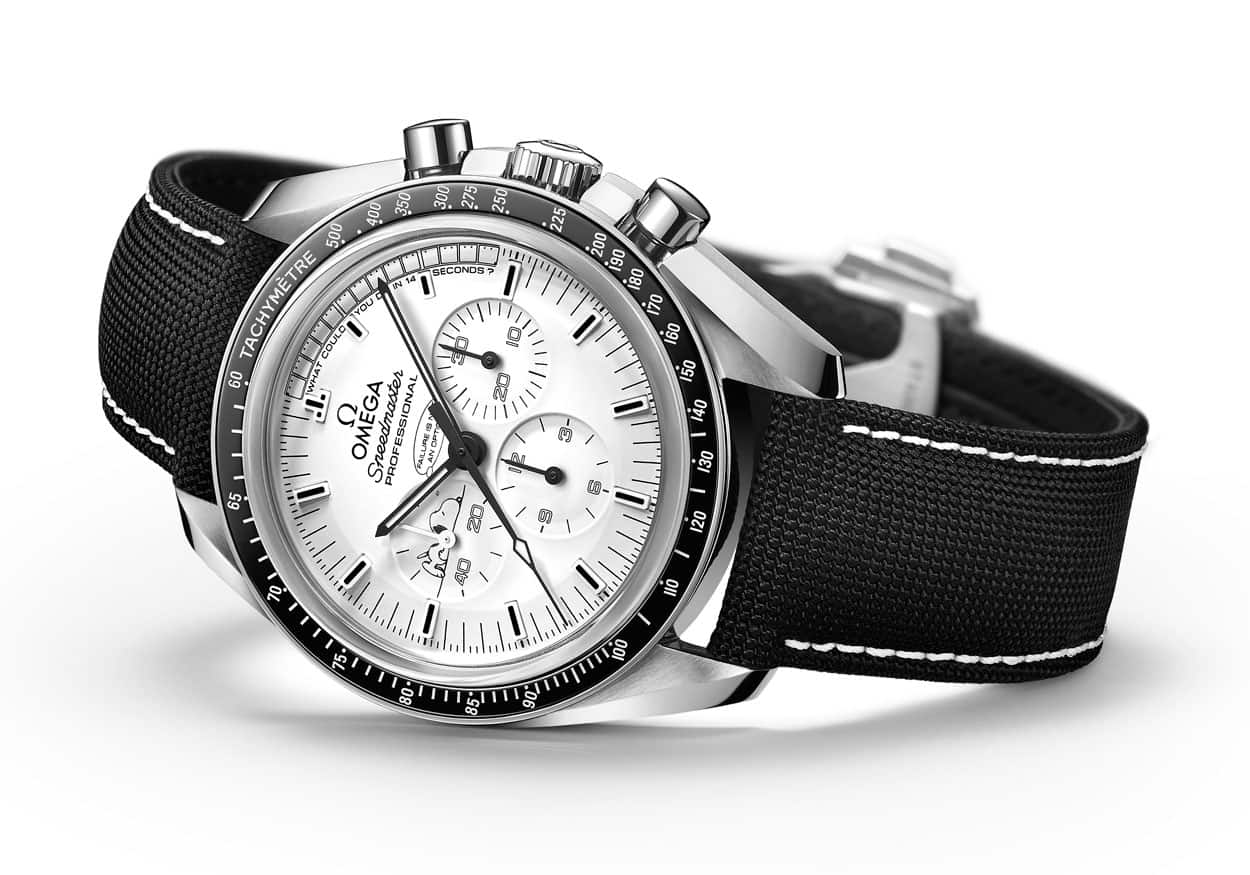 The dial of the Speedmaster Silver Snoopy Award is white and has a number of interesting things on there that needs a mention. Let’s start with the little sentence that starts at the 12 o’clock position: “What could you do in 14 seconds?”. The question is a nod to the 14-second mid-course correction that the Apollo 13 astronauts timed with their on-board back-up timing device: the OMEGA Speedmaster Professional chronograph.

Then there is Snoopy taking a little nap on the sub dial at 9 o’clock, NASA’s watchdog. In order to understand the relationship between Snoopy and NASA, you need to know that:

In 1968, NASA chose the famous beagle as an icon to act as a sort of “watchdog” over its missions. In the same year, NASA decided to use a sterling silver Snoopy pin as a sign of appreciation to NASA employees and contractors together with a commendation letter and a signed framed Snoopy certificate. Each of the sterling silver Snoopy lapel pins has been flown during a NASA mission.

Cartoonist Charles M. Schulz, who created the “Peanuts” comic strip (featuring Snoopy and Charlie Brown) was a supporter of the NASA Apollo missions and agreed to let them use “Snoopy the astronaut” at no cost and even drew the Snoopy figure for the sterling silver lapel pin.

NASA used the Snoopy award for special contributions and outstanding efforts from both NASA personnel and contractors. On October 5th, 1970, NASA gave the Omega Speedmaster a Snoopy award to acknowledge the crucial role the watch played during the Apollo 13 mission.

A little text balloon above Snoopy’s head tells us that “Failure is not an option”. These words were spoken by actor Ed Harris in his role as Apollo 13 Flight Director Gene Kranz in the 1995 movie about the Apollo 13 (featuring Tom Hanks and others).

A lot of text on the dial, but all with a reason and it doesn’t really disturb the dial in my humble opinion. However, it also might be my biased opinion towards the Speedmaster Silver Snoopy. On Thursday we will able to see and try this watch in the flesh and compare it to the existing Speedmaster Snoopy Award from 2003.

An important note is the luminosity of the dial (and tachymeter scale) of the new Speedmaster Silver Snoopy Award. Even the sleeping Snoopy will light up in the dark, very impressive. 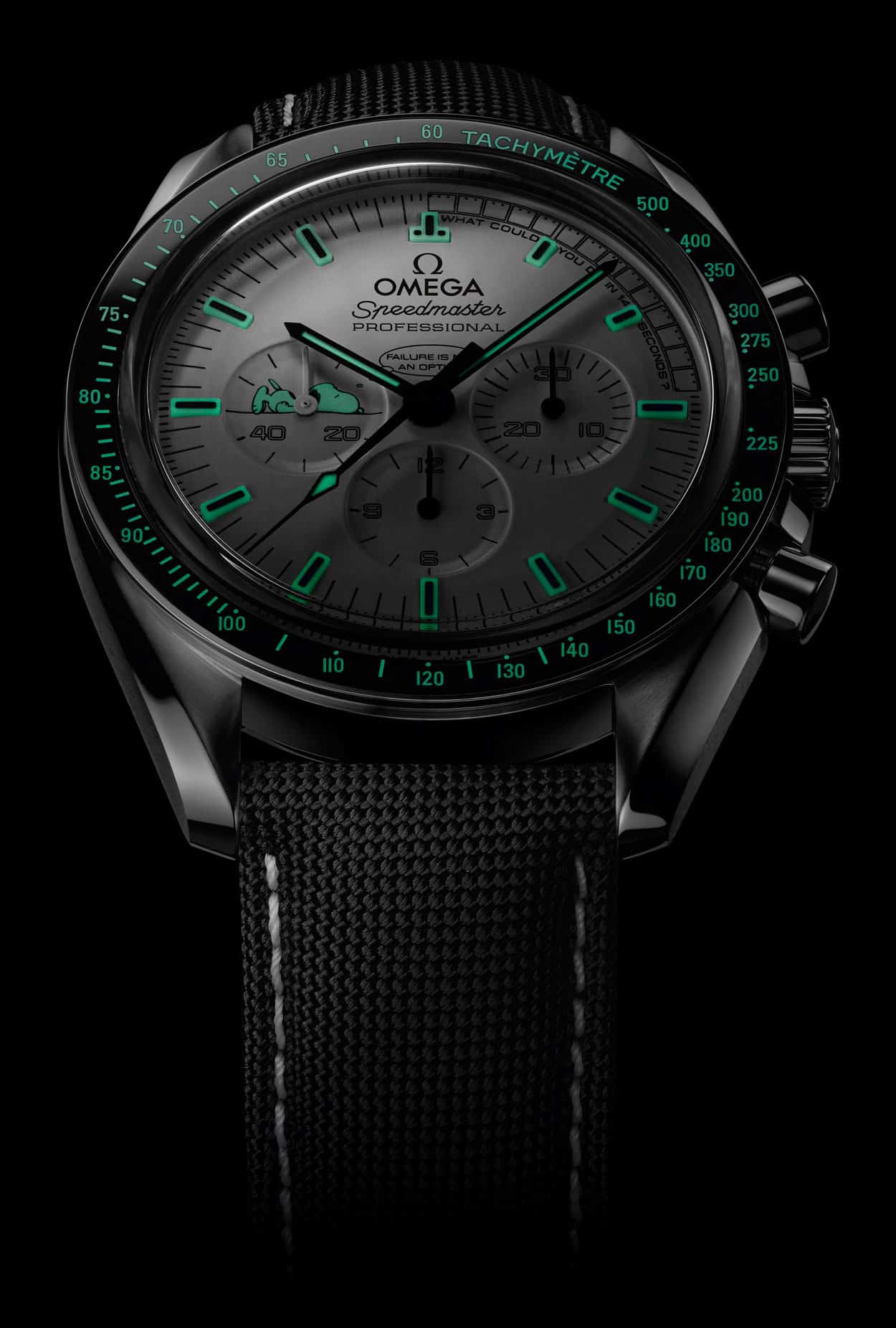 Now, just like its 2003 predecessor, the cool part of the watch is also on the back side. Where the former model had a sapphire case back with an enamel-like image of Snoopy on the case back (see below), the new Omega Speedmaster Professional Silver Snoopy Award has a sterling silver Snoopy. The medallion is protected under sapphire and the applied 925 silver Snoopy on 925 silver plate filled with dark blue enamel with “925 silver pallions” representing the stars . 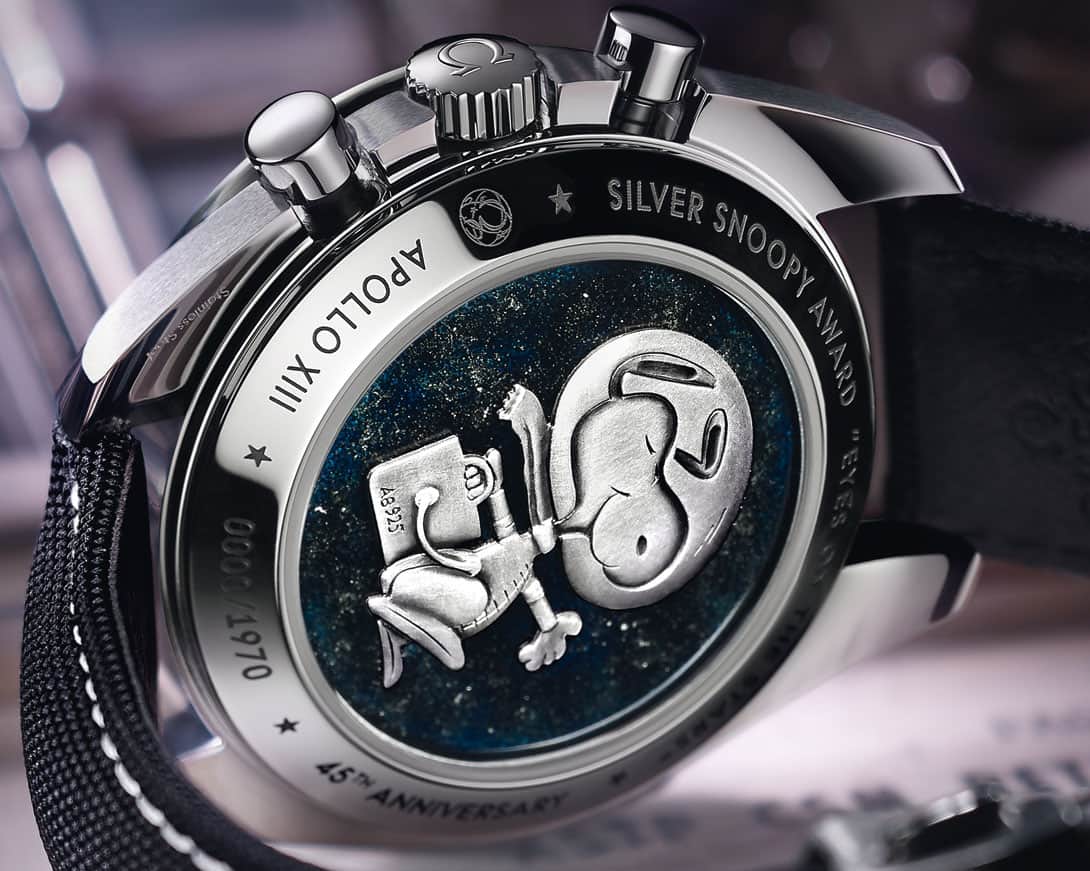 In the stainless steel case back you will also find the following wording: “SNOOPY AWARD”, “EYES ON THE STARS”, “45TH ANNIVERSARY”, “xxxx/1970”, “APOLLO XIII”. I guess this doesn’t need much explanation, but it also indicates of course that there will be only 1970 pieces available. The previous Snoopy Award had a whopping 5441 pieces and that one is already difficult to source in the pre-owned market these days. I expect that this new Omega Speedmaster Pro Silver Snoopy Award will run out as quickly as last year’s Apollo XI 45th Anniversary edition of the Moonwatch. 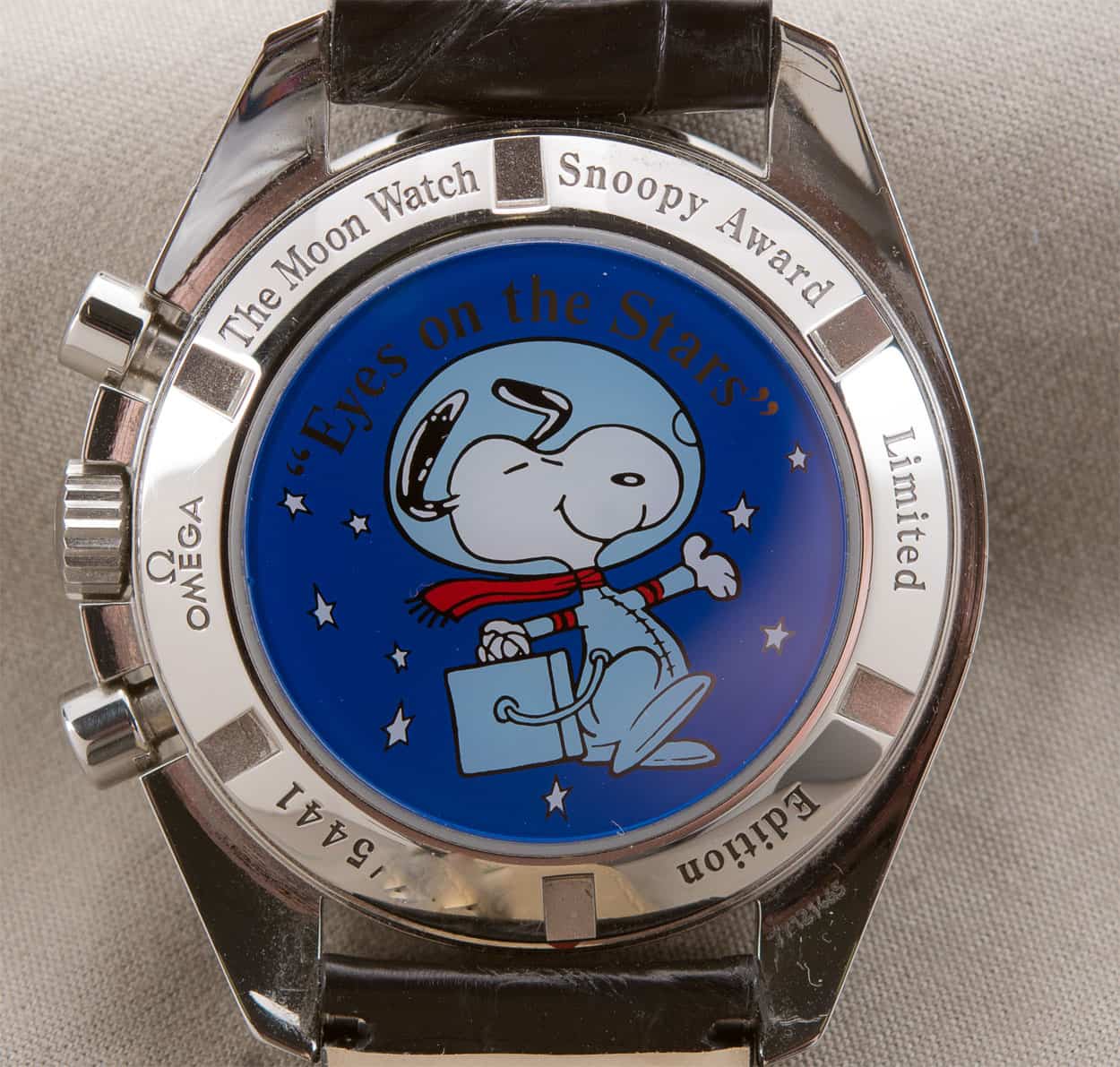 The Omega Speedmaster Professional Silver Snoopy Award reference 311.32.42.30.04.003 comes on a nice black coated nylon fabric strap with white stitching and a folding clasp. Like all 42mm Speedmaster Professional watches, the lug size is 20mm. You can also add a stainless steel bracelet to this watch, or one of the new Omega NATO straps of course.

A special presentation box is used for the Silver Snoopy Award, including a certificate of authenticity and a 925 sterling silver Snoopy pin and a dedicated newspaper (Apollo XIII). There is no information available about the price for now, but probably somewhere between the list price of the regular Speedmaster Professional ‘Moonwatch’ and the Apollo XI 45th Anniversary Edition (was € 5850 Euro) I guess. 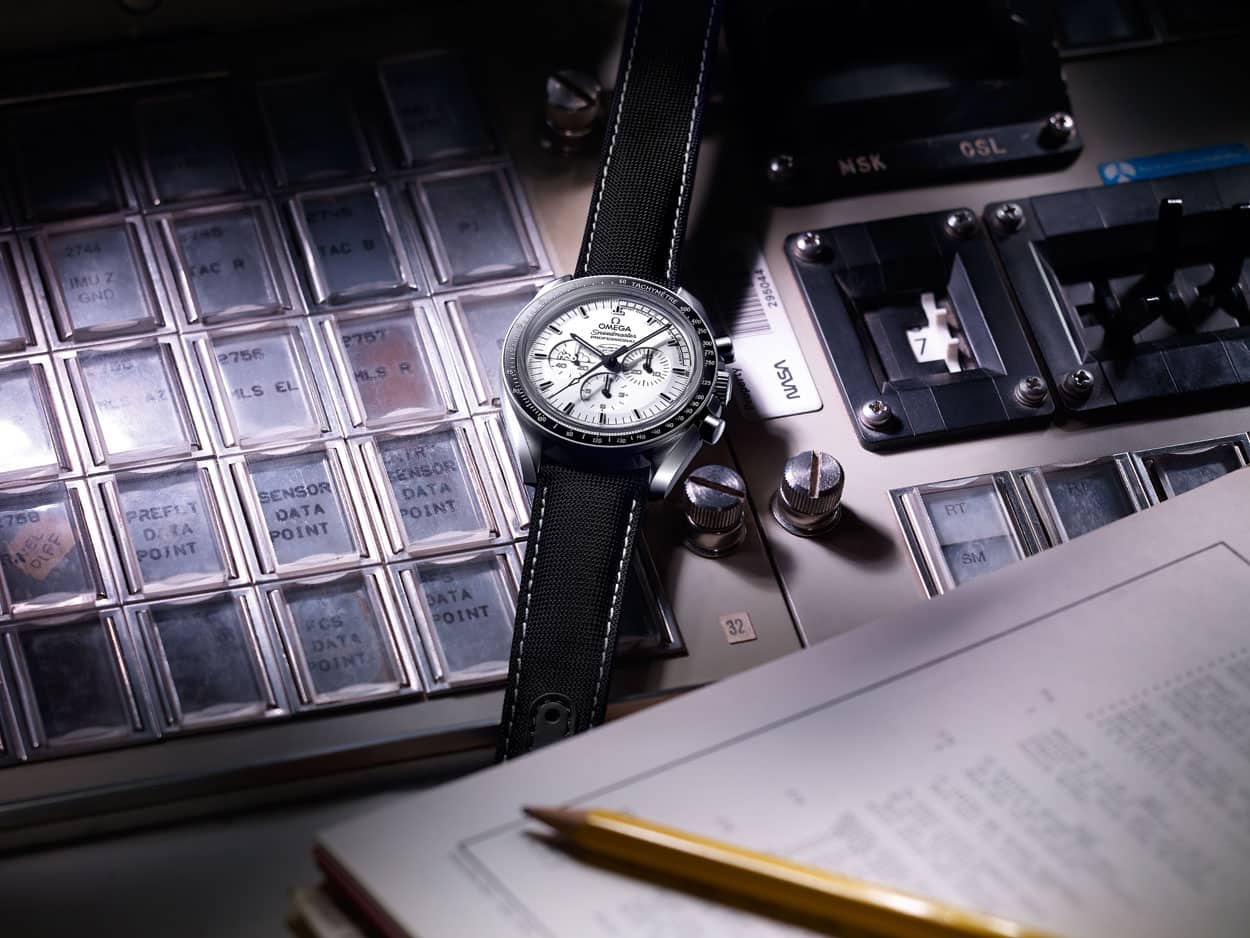 Hot Topics
Laventure Automobile Chronograph With A Proprietary Movement — Marking A Huge Leap Forward For One Of The Industry’s Most Promising Brands
157 comments
We Talk To Swatch Group CEO Nick Hayek About The MoonSwatch
116 comments
Fratello Exclusive: An Inside Look At The MoonSwatch Production Facilities
76 comments
Summer Splash — Semi-Final 1: Thor’s Doxa SUB 300 Divingstar Vs. Jorg’s Tudor Pelagos FXD
61 comments
How To Prevent Buyer’s Remorse When Shopping For A New Watch
44 comments
Popular
(From The Archives) Shut Up & Read The Truth About Cartier Watches
George Cramer
21
Hands-On With The Seiko Prospex Dawn Grey Series
Robert-Jan Broer
9
Grand Seiko SBGA211 ‘Snowflake’ And Why I Didn’t Buy It
Robert-Jan Broer
22