This watch was already shown as a pre-SIHH 2015 release a while back, but nothing beats to see a watch in the flesh. I suspect that this watch was chosen to be a shown to the public as a pre-SIHH release for a few reasons, one of them is that it is commemorating the 185th anniversary of the Baume & Mercier manufacture in 2015 and that it is a limited piece. So orders could be given in time. Another reason might be that Baume & Mercier’s SIHH 2015 presentation had a strong focus on the Classima collection. We will get back to the Classima collection soon, but first we’ll have a look at this Baume & Mercier Clifton 8-Day Power Reserve 185th Limited Edition watch. 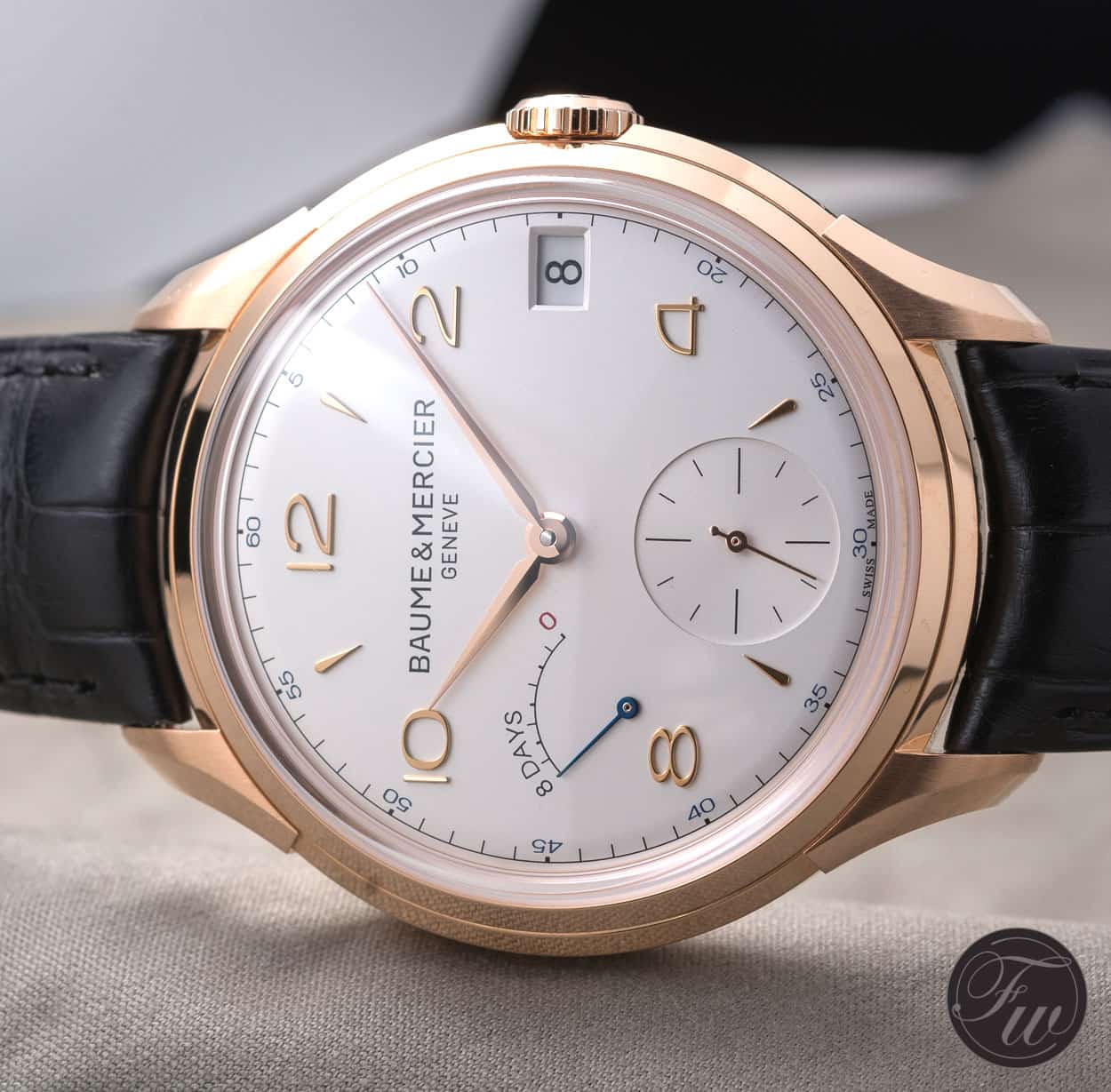 When Baume & Mercier introduced the Clifton collection two years ago, CEO Zimmermann said it was part of their ‘affordable luxury’ strategy. Although the regular Clifton collections are indeed in the relatively affordable price segment, this Clifton 8-Day Power Reserve is of course something for the happy few that can afford one and able to get one, as it is limited to 185 pieces only.

The Baume & Mercier Clifton 8-Day Power Reserve watch has the same beautiful classic looking case as the normal Clifton collection, but made of 18 carat red gold for this special celebration. The case measures 45mm in diameter but sits very comfortable on the wrist. The beautiful beefy and curved lugs make this watch looks a tad bit smaller than its specification but still gives it a huge presence on the wrist. While the lugs have this subtle brushed finish, the case and bezel received a beautiful polished finish. The Clifton in general reminds me of those beautiful 1950s designs from various watch brands out there, but modernized in many ways.

Don Draper could be the type that would wear a Clifton in the AMC hit series Mad Men, only the power reserve indicator and size would immediately give away it’s a modern watch. The applied hour markers, both Arabic and nice pointy shaped indicators in red gold, the leaf shaped hands and the beautiful cream dial are simply stunning.

Watch fans might recognize the dial lay-out from another Richemont brand, which is correct! The power reserve indicator positioned at 9 o’clock and the sub-dial at 6 o’clock might have given it away, but it is indeed based on the same movement that the IWC Portofino Hand-Wound Eight Days collection uses. IWC’s large caliber 59210 was used to power the Clifton 8-Day Power Reserve as well. The photos below do not hide the fact that both watches are using the same engine. The finish is a bit different and so is the engraving of course, giving the IWC a bit more ‘classic’ appearance and the Baume & Mercier a more modern one. The big barrel is there to make sure the 8-day power reserve and the beautiful indicator on the dial will tell you when it is time to turn the crown again. The beautifully finished movement (with Côtes de Geneve finish and blued screws) ticks at 28,800 beats per hour.

Another aspect that Baume & Mercier borrowed from IWC is the way it indicates being a limited edition. “One out of 185” indicates that there are only 185 pieces to commemorate the brand’s anniversary. A reason for using the “One out of..” is that there won’t be a hassle about specific numbers that someone would like to have. On the other hand, having a numbered limited edition has a bit more exclusivity to it. 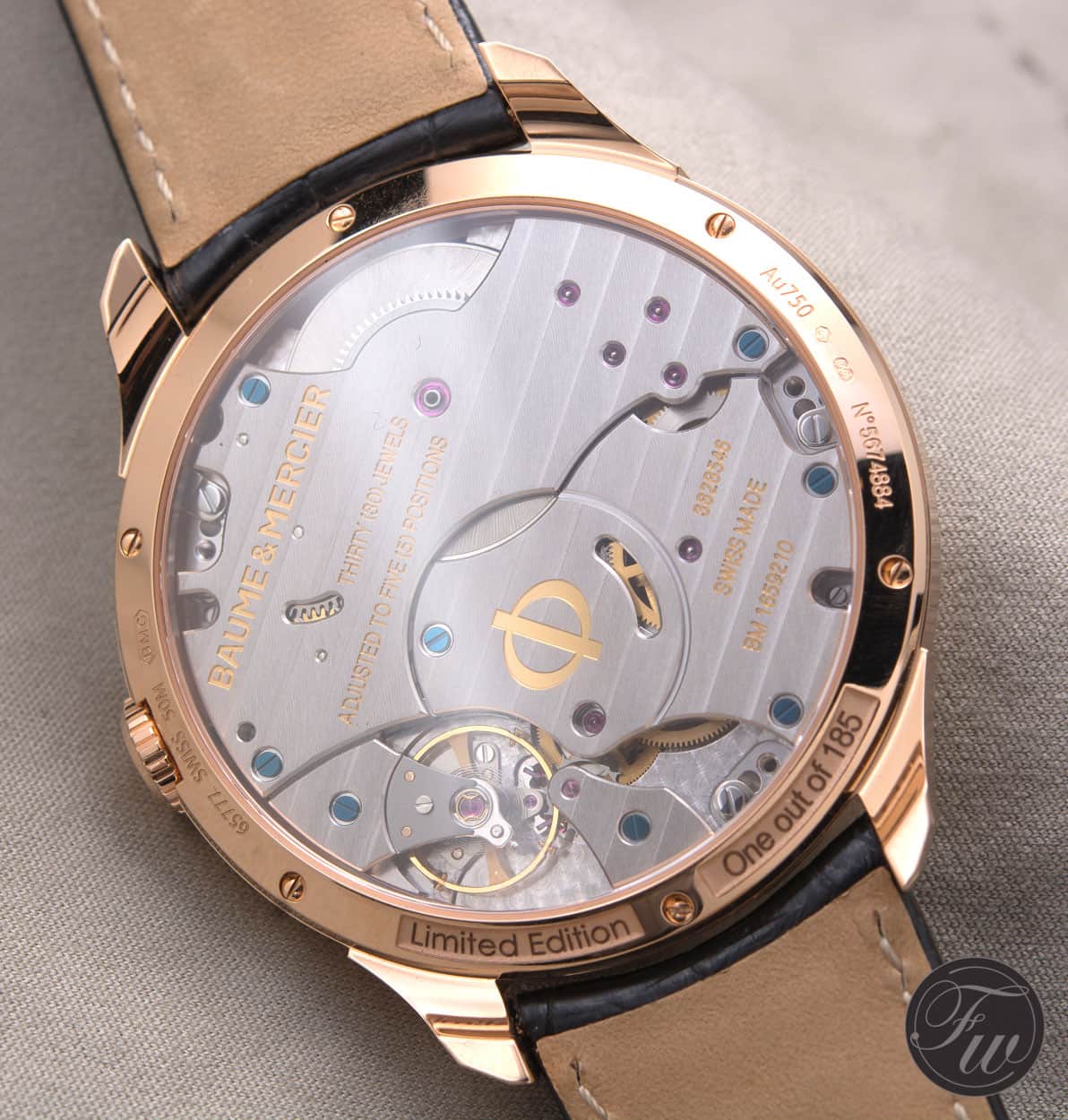 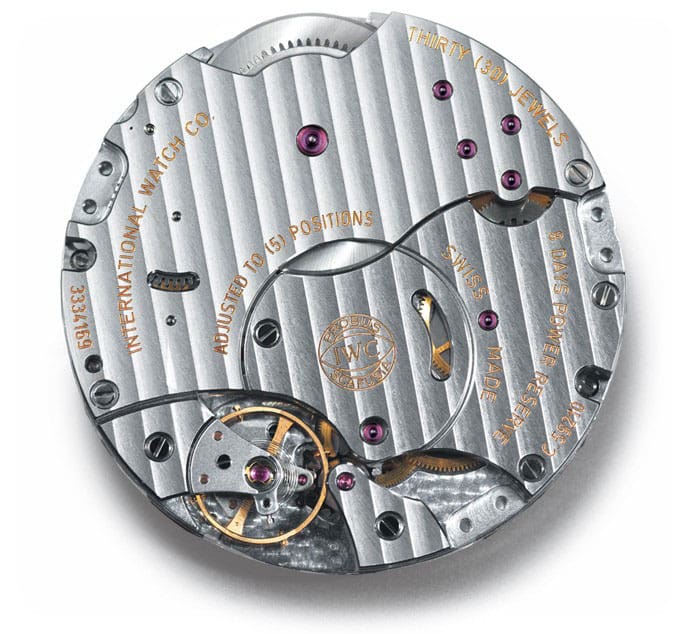 At the time of the introduction however, the Baume & Mercier Clifton 8-Day Power Reserve was priced just under $20,000.- USD (~ € 15.500,- Euro). The official price of a red gold IWC Portofino Hand Wound Eight Days watch on a Santoni leather strap (which retails for € 18.200,- Euro). During the SIHH, there was no official price given for this timepiece yet. With the ‘unofficial’ price increase of about 8% that I’ve heard about, it would come close to the price of the IWC Portofino Hand Wound Eight Days. Too close, perhaps.

More information about the Clifton can be found on the official Baume et Mercier website.

Hot Topics
Sorry Tudor, It’s Not You, It’s Me… But I’m Selling My Black Bay Fifty-Eight
157 comments
Dear Watch Fans, Why So Angry? — Don’t Let Your Passion Get The Better Of You
97 comments
Hands-On With The Polarizing Tudor Black Bay Pro
69 comments
The Unexpected Perfect Two-Watch Collection — Rolex Sea-Dweller And Day-Date
69 comments
Introducing The New Fortis Stratoliner — Tested For Space Travellers
57 comments
Popular
Rolex GMT-Master History And Overview Of All Major References
Robert-Jan Broer
16
Why Are There No Stainless Steel Rolex Watches Available?
Robert-Jan Broer
119
Why You Can’t Go Wrong With The Rolex Datejust
Robert-Jan Broer
3