Another Look at BCatt Watch Straps – New Techniques and Materials

September 2015 feels like a long time ago, but that’s exactly when we reviewed a few of the offerings from UK-based BCatt Watch Straps. I initially spotted these on Instagram and was drawn to these straps due to their bright colors. In the article, we went into detail about how Ben Cattroll hand dyes the vegetable tanned leather into so many colors and then burnishes the edges. Since the nearly two years since the article’s airing, I’ve worn the straps heavily – well, as heavily as one can when they try to rotate watches on a daily basis. I own a Breitling 765CP “Jean-Claude Killy” and it has lived solely on a brown distressed strap from Ben. What I can tell you is that these straps have aged beautifully, show a lot of character, and exhibit none of the splitting or damage that often plagues handcrafted straps. To this day, I’m often asked, “where did you get those straps?” and I hope my enthusiastic waxing has resulted in a few sales (well, I know one for sure that just happened 😉 ). 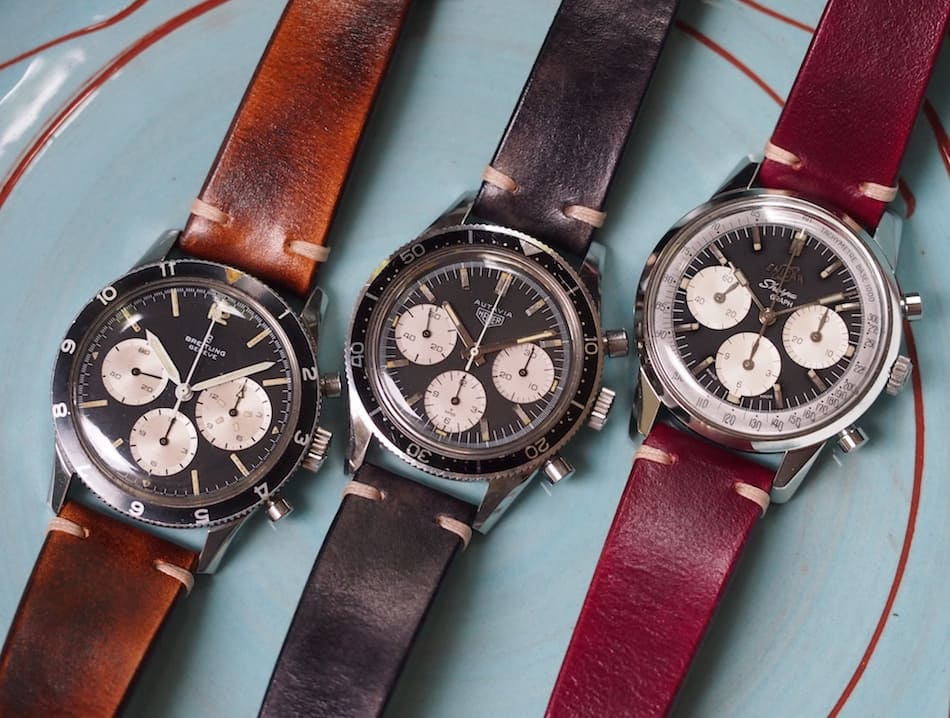 So, why have we returned with a second look at BCatt Watch Straps? It’s simple: an artisan needs to evolve and a quick glance at Ben’s Instagram feed, along with some chats over email, showed some new and enhanced items. No, the bright colors aren’t gone, but they’ve now received an upgrade via an edging technique that’s sure to add even more durability to some already stout straps. If you take a closer look at the BCatt Watch Straps feed, you’ll also notice something else: new leathers. Yes, Ben has begun sourcing unique hides from some of the world’s most historic tanneries. 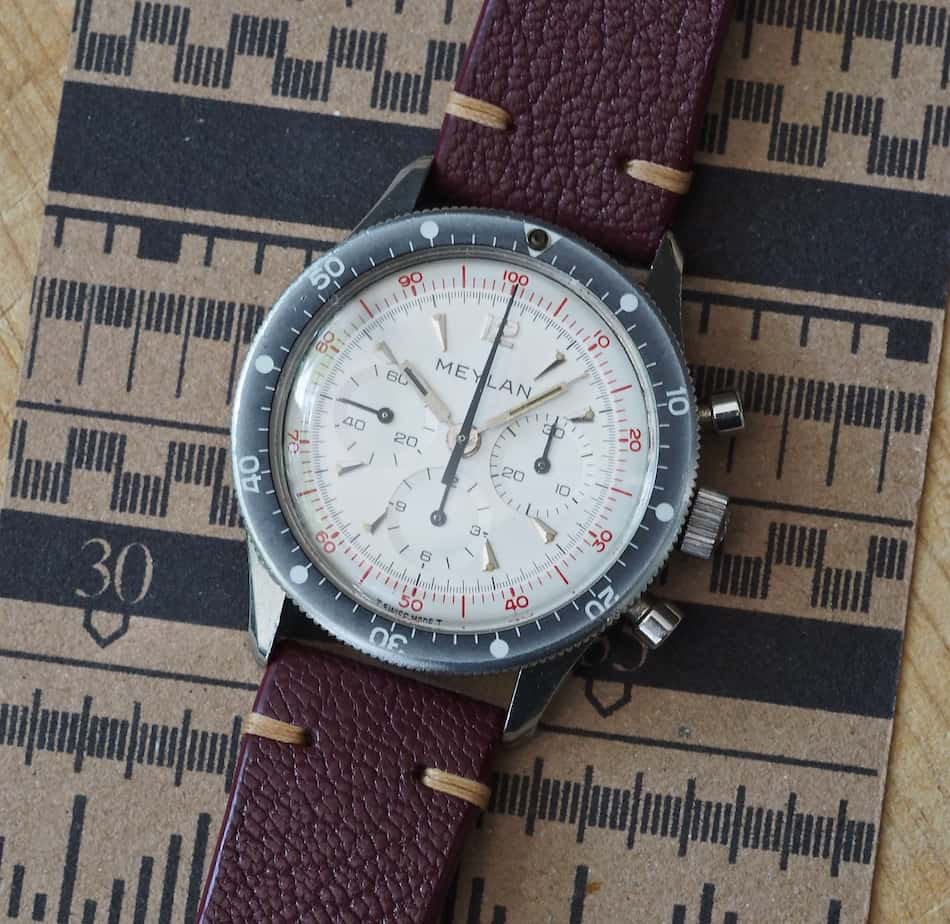 Matching Your “Shoes” with Your Watch

Before we take a look, let’s put a fact on the table. When I saw the newest wares from BCatt Watch Straps, I reached out to Ben and we started talking. Ultimately, he asked if I wanted to try various colors and sizes. Due to the custom nature of these straps – the thicknesses, widths, lengths, and colors – everything was custom made for my tiny wrist and generously provided by Ben. While that’s not any different than any other strap review we do, I thought it best to be open and honest. You’ll note that I rarely feature straps and talking about the same maker twice is a real aberration for us – but I really like these; there’s just something so inherently good about pairing your vintage gem with the right “shoes”. 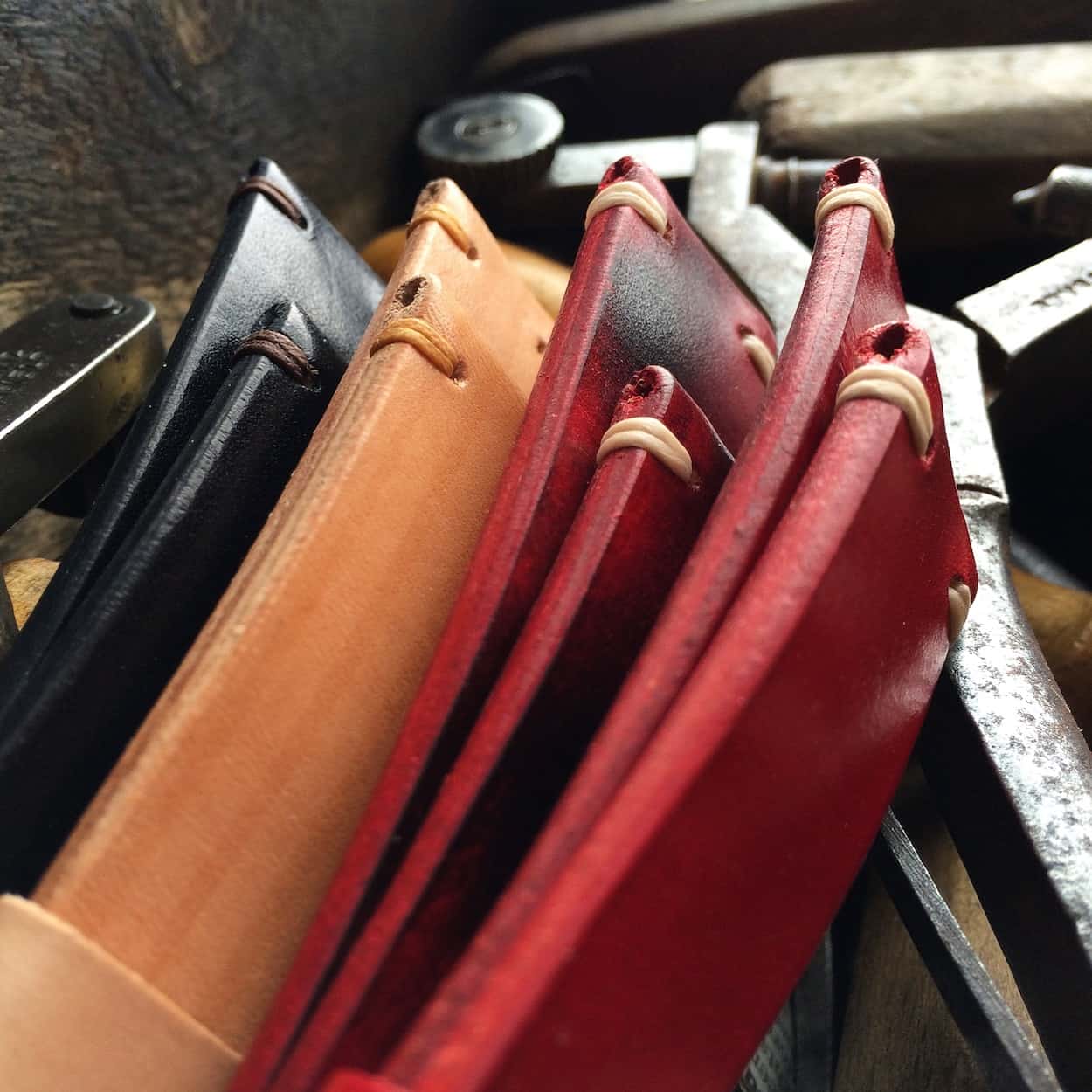 A technical piece worth explaining prior to seeing the different BCatt Watch Straps is the edging technique used by Ben. In our last article, Ben spoke about his burnishing method. Essentially, he sanded down the edges of the veg-tanned leather to provide as smooth a surface as possible. This way, when the strap makes contact with the buckle, not only when putting on or taking off the watch, but also during normal use, friction and wear are reduced. Still, one ends up with an edge that degrades over time and possibly becomes a little ragged looking. 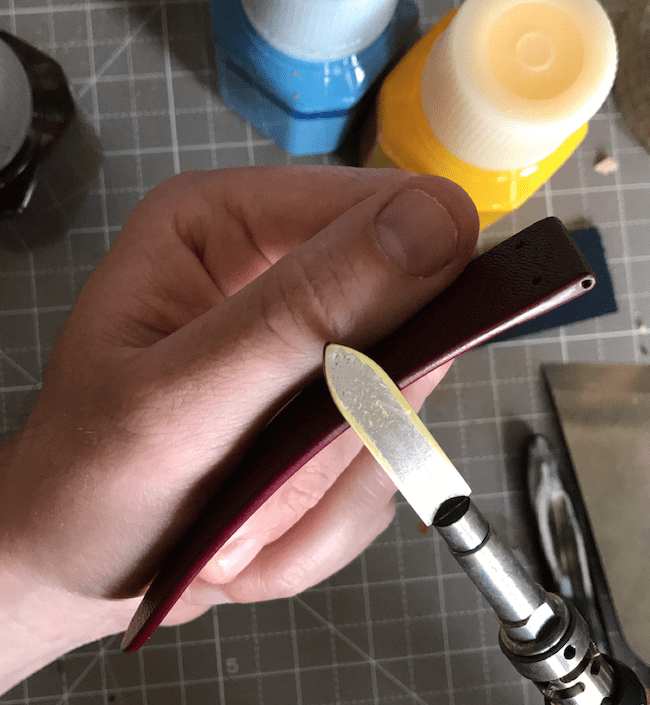 Ben didn’t like this for his BCatt Watch Straps and he explained that the burnishing process ultimately limited the types of leather he could use. So, he invested in a tool well known to those in the leather goods trade, a fileteuse manuelle. It’s a French-made, electric creasing and edging machine that applies heat to finish the edge. Because it’s electric, the tip of the tool maintains a constant temperature (historically, this was done with a flame to heat the tip) and a more consistent edge. After this, Ben applies 3-4 layers of edge paint (available in at least 15 colors) to seal the crease. He then sands and polishes the edge for a smooth look. Need some context? If you’ve ever held an expensive bag from Hermes or Prada, take a look at the edges and you’ll experience the result from the same process. Introductions over, let’s see how Ben’s new handiwork looks with some vintage watches. 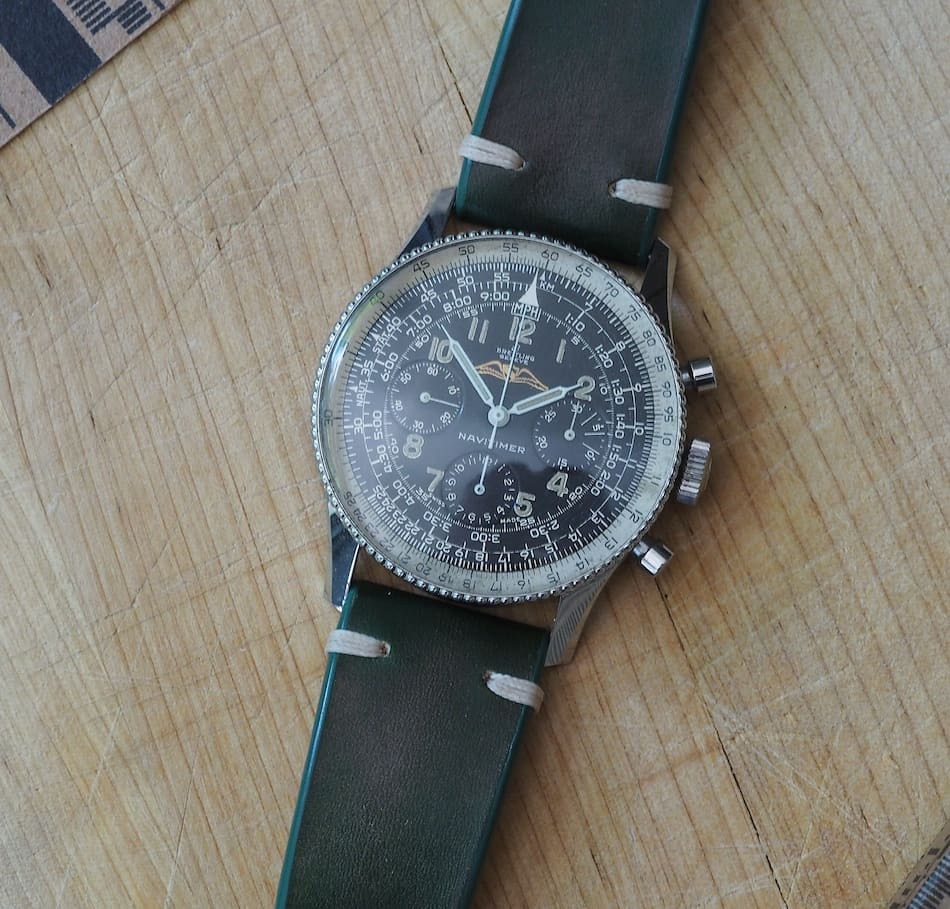 There are now a number of different styles from BCatt Watch Straps, but the brightly colored hand dyed examples are still the most popular. Ben ended up sending a couple different distressed examples including one in a color he had never really tried: British Racing Green. I had long been looking for the right color strap for my Breitling Navitimer 806 “All Black” and felt that dark green was a good match to the dial. 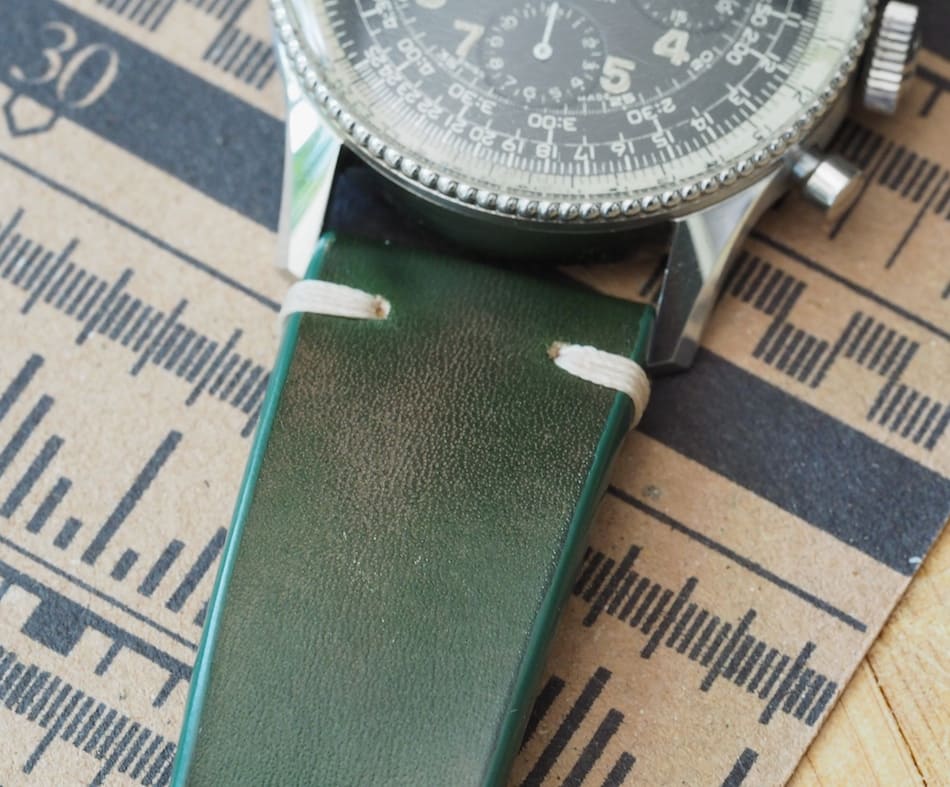 After discussing the idea with Ben, he worked to create a great looking strap with just enough of the natural tan leather showing through to compliment the dial patina. 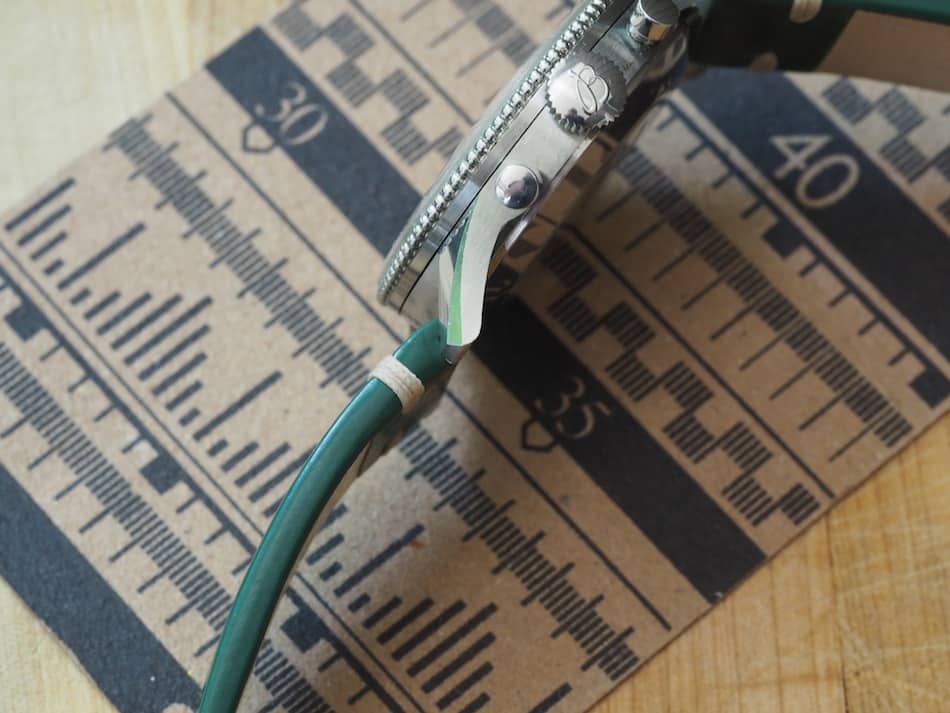 You’ll see that I chose an edge paint consistent with the strap color itself (I did this on all straps) and it really does provide for a smooth, high quality finish. 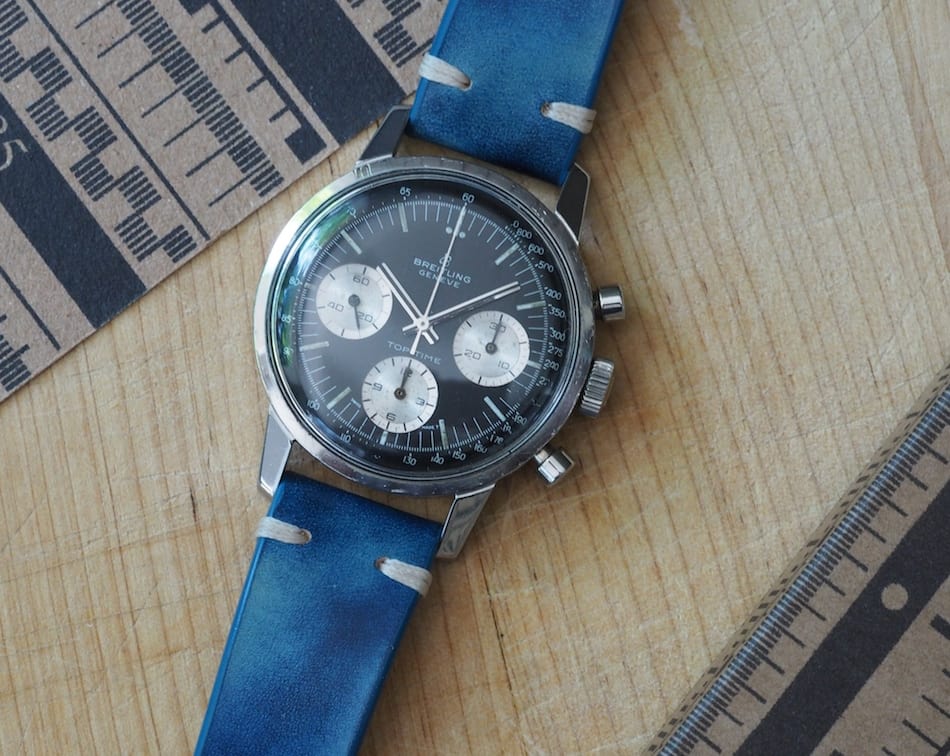 The other hand dyed strap I chose was a medium blue to fit a later generation Breitling Top Time 810. This is a watch that I’ve struggled to pair as black straps mute the watch and brown makes it look like too many other pieces I own. The blue, in my mind, adds some needed pop. Price wise, these come in at 80GBP, which is very reasonable considering the amount of work that factor into these. Add another 10GBP for the distressed look. 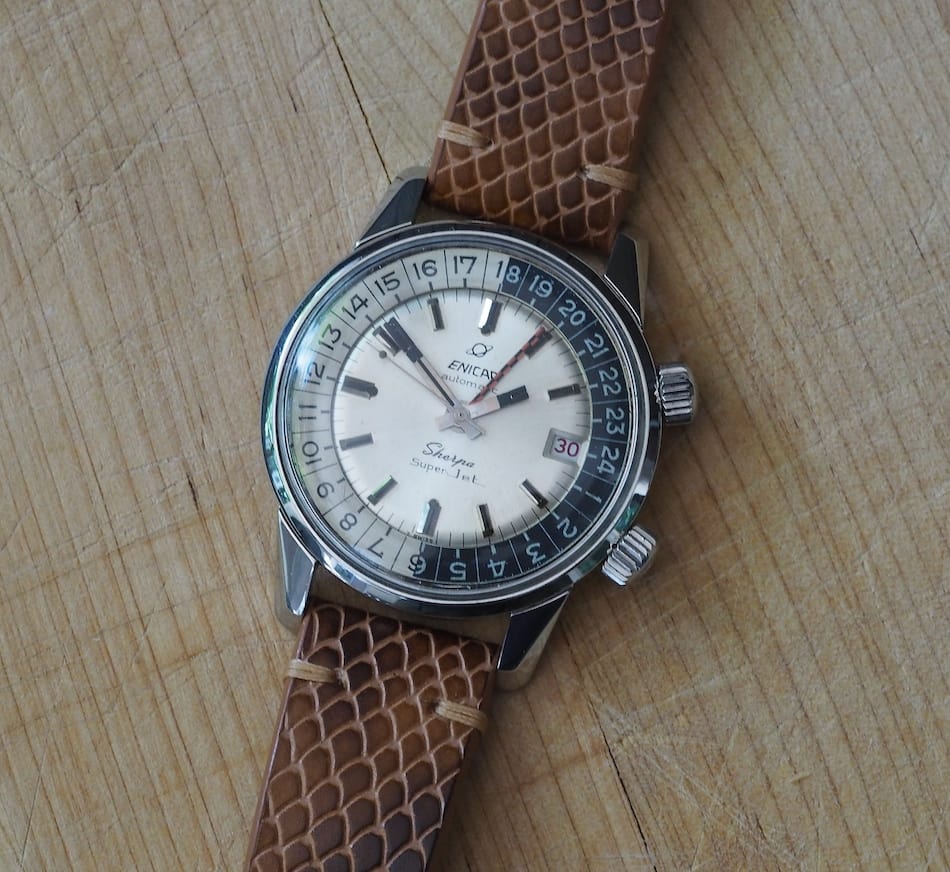 The next strap from BCatt Watch Straps contains a snakeskin embossed finish. This is basically the same base leather as the hand dyed material above but it has a pattern pressed into its surface. These straps can also be colored to choice. Ben added this option not long after our initial article and, to be honest, they didn’t jump out as something I’d naturally choose. 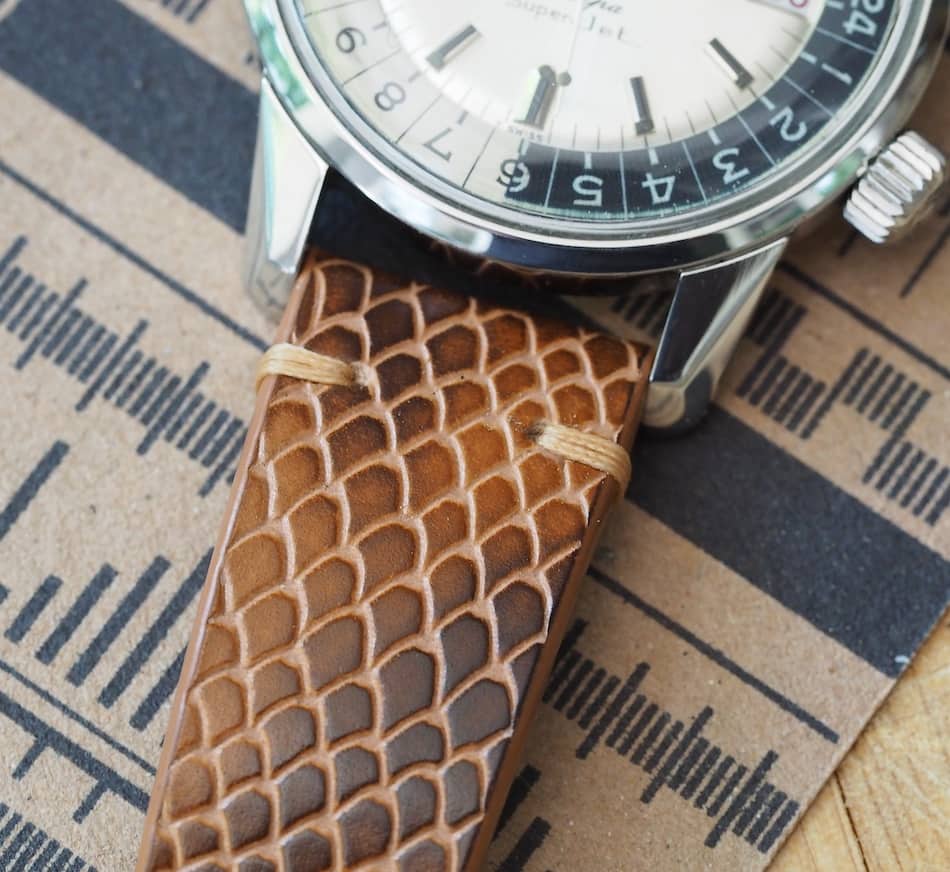 However, in person, the strap is highly detailed and when added to the Enicar Sherpa Super Jet, it definitely supplemented what is, otherwise, a very understated watch. These come in at 90GBP. 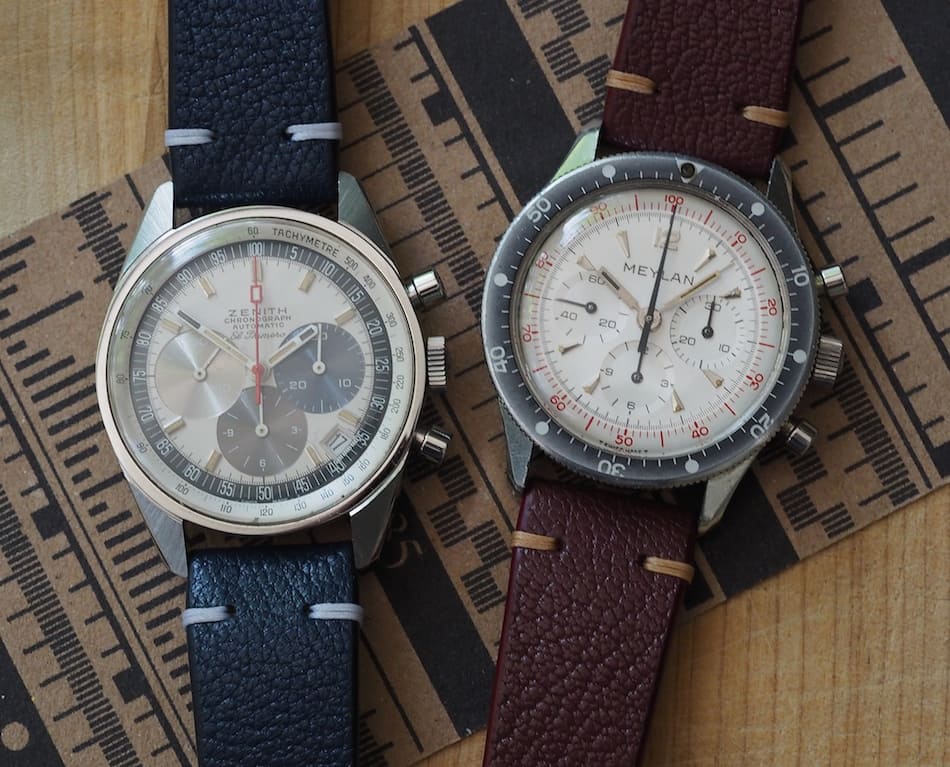 You can certainly tell that I’m sold on the hand dyed pieces from BCatt Watch Straps, so what about the straps that are pre-colored? Admittedly, I was a little skeptical. I had no concerns over Ben’s ability to finish these straps. No, I was more concerned about encountering “just another strap” that’s similar to most others on the market. What I found, though, is that the combination of the new edge finishing along with some uniquely chosen leathers, my concerns were baseless. This was especially true when handling the goat leathers from the Alran Tannery in France. This is a century old supplier of leathers and in this case, a 3-week process with 23 steps is used at the tannery to achieve the rich colors and textures you see here. I tried navy and “chevre chagrin” (burgundy), but black is also available. 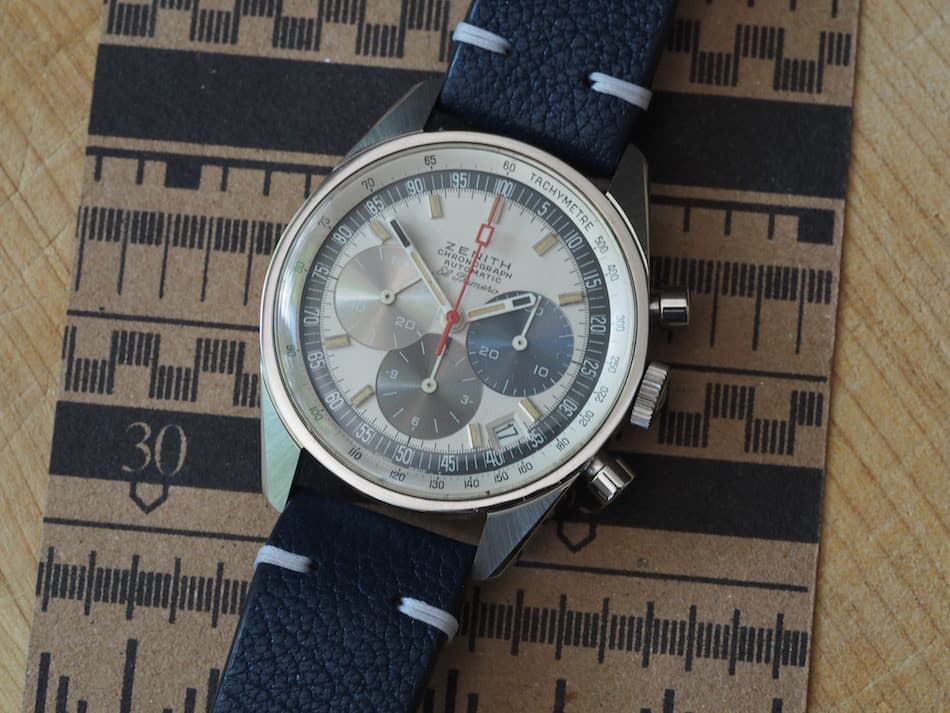 The navy was an absolute knockout on the Zenith A386 and it matches the blue on the dial perfectly. I wore this one to the “Watches With Nicknames” event in Geneva and it garnered heavy praise. 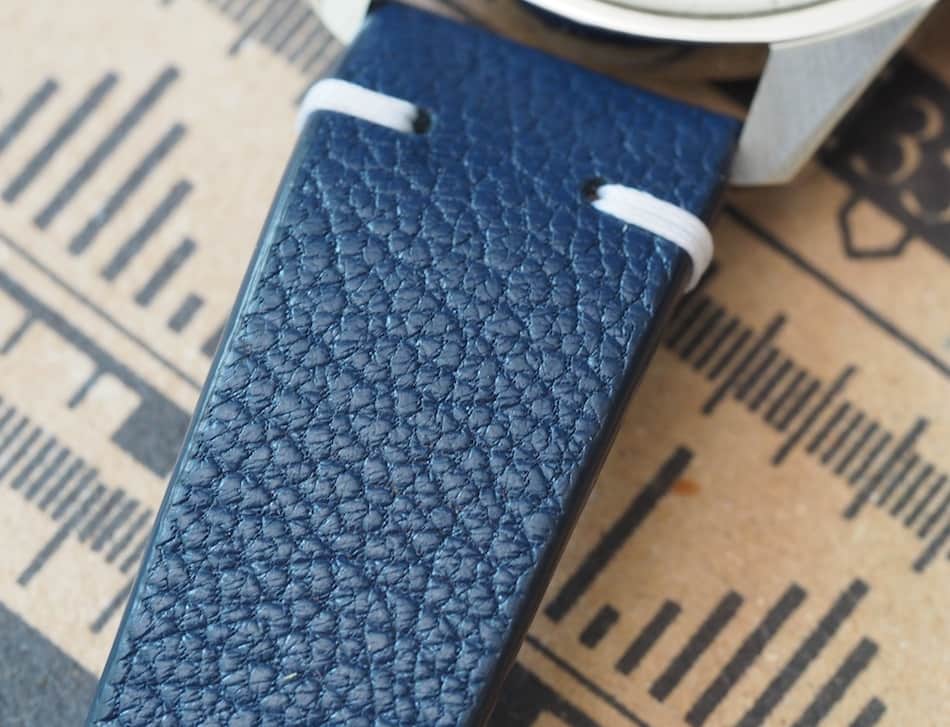 Similarly, the Meylan Chronograph looked perfect on the burgundy as this watch has some red script on its outer decimal scale. These leathers are wonderfully textured and supple with an underlying firmness that gives them some proper “backbone”. Pricing is a reasonable 85 GBP. 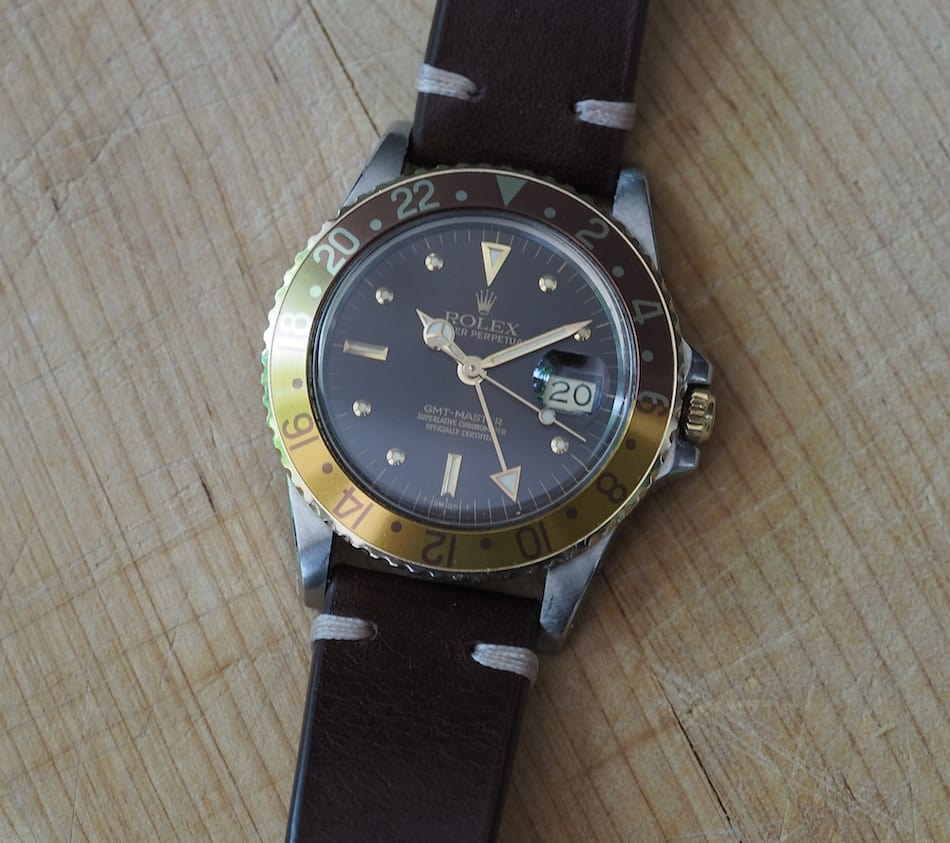 The other leather from BCatt Watch Straps that boasts a big name (if you know leather tanneries, that is) is the Buttero from the Italian tannery, Conceria Walpier. This leather is dark brown in color – think chocolate – and is vegetable tanned. It’s a highly sought after material that’s very even in color to the point of being a bit dressy. This is why I combined it with the Rolex 16753 “Clint Eastwood”. While I often prefer this watch on a bracelet, this Buttero strap gives it a smart casual look that never falls into sloppy. Here again, this leather is firm, but it’s breaking in very nicely. 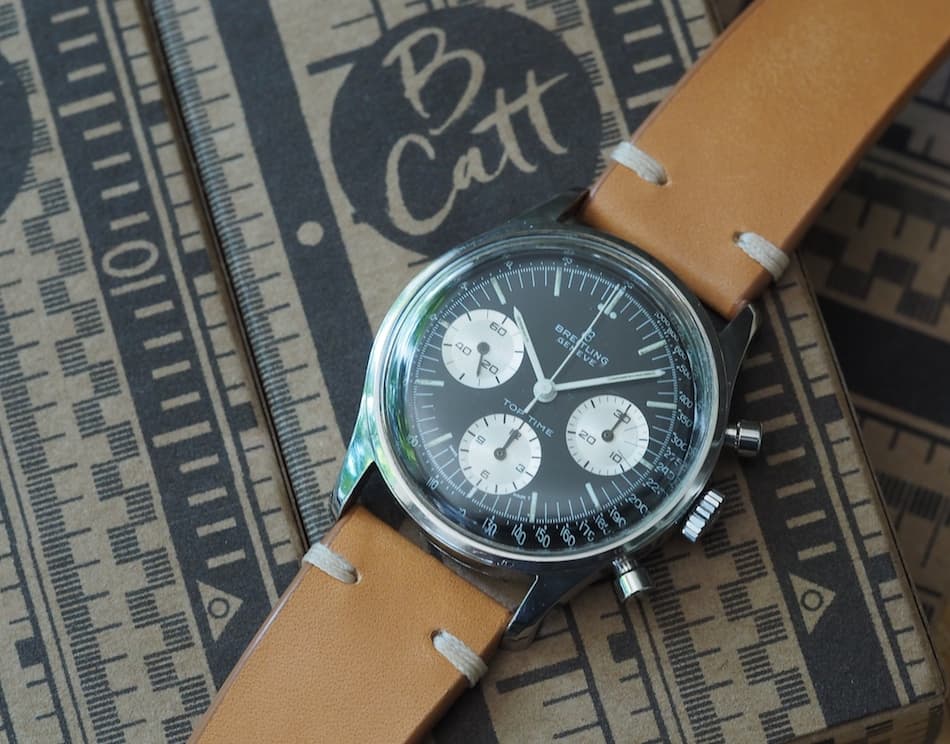 Simple Vegetable Tanned is a Winner

The simplest offering from BCatt Watch Straps is made of vegetable tanned leather that’s sourced from Europe. Since acquiring a first generation Breitling Top Time 810, I’d been unable to find the right accompaniment. A 21mm lug width hasn’t helped matters and I’ve also been searching to find the right color that ensures the dial remains star of the show. With this simple tan strap, I’ve found a solution. The color is not so light that it disappears and yet it’s not too dark either. The leather, itself, is firm enough to set around my wrist and should age nicely. I’ll also be interested to see if it darkens slightly. These straps are priced at 80GBP. 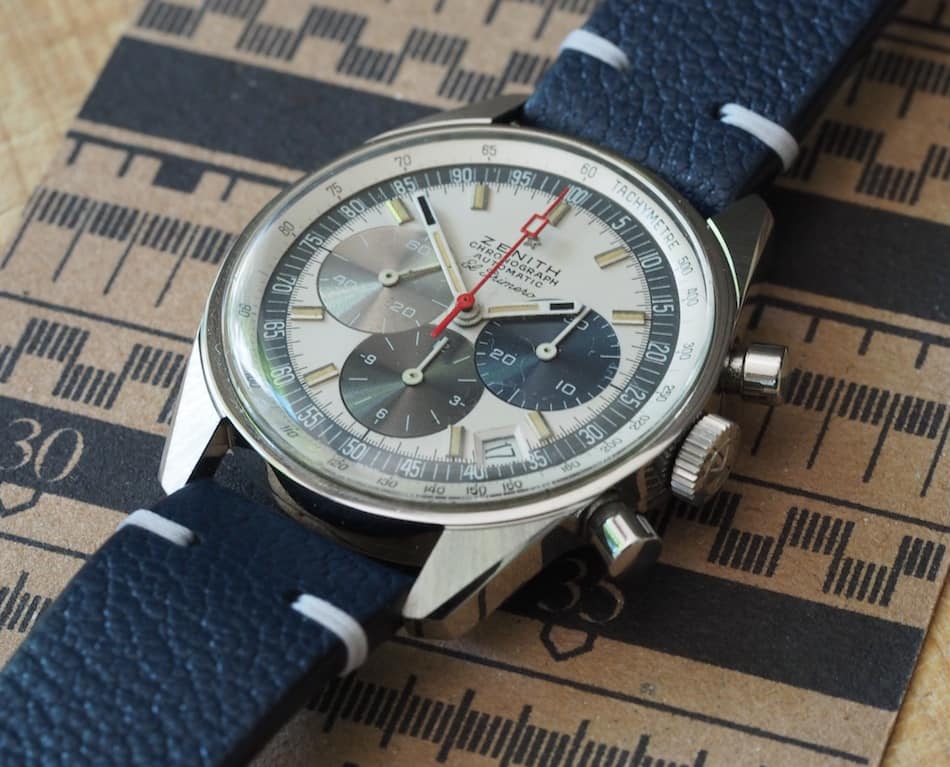 Other news at BCatt Watch Straps is that Ben now sends all of his straps in small cardboard boxes with his own design motif (I still wish he’d brand the back of his straps with his name or logo 😉 ). 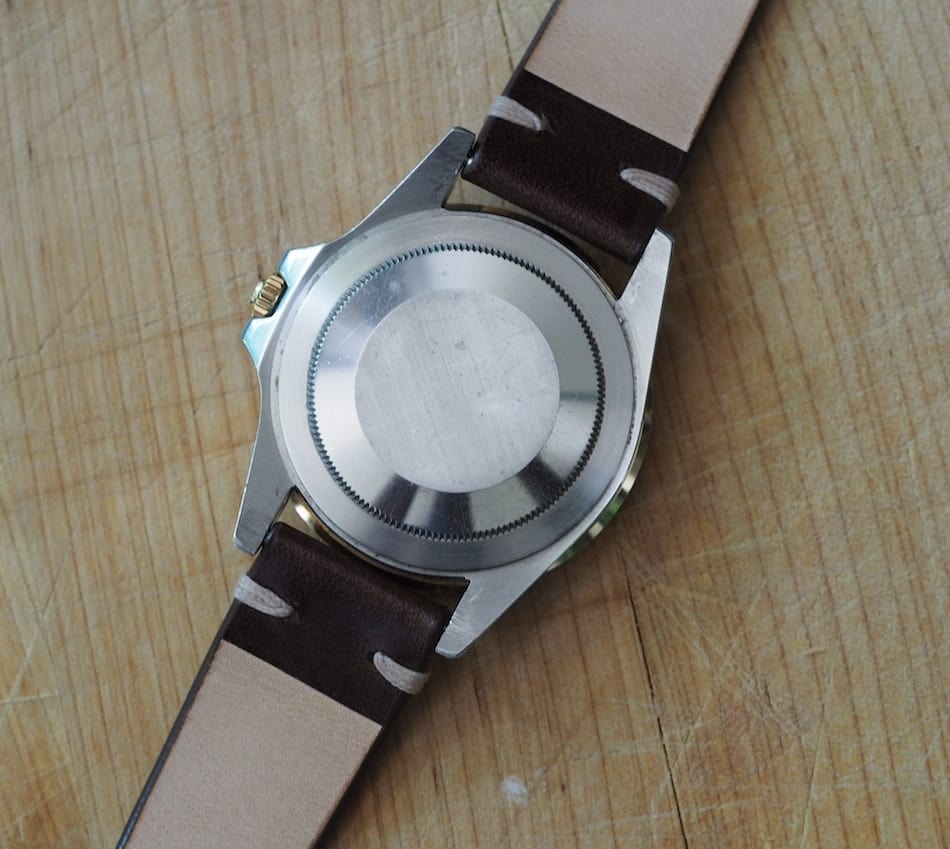 He’s added more thread colors (up to 16 now) and has placed more emphasis on evenly finishing the backs of the straps. Rally holes are now available as well. Going forward, expect additional leathers such as crocodile and even a possible expansion into bags and other items. 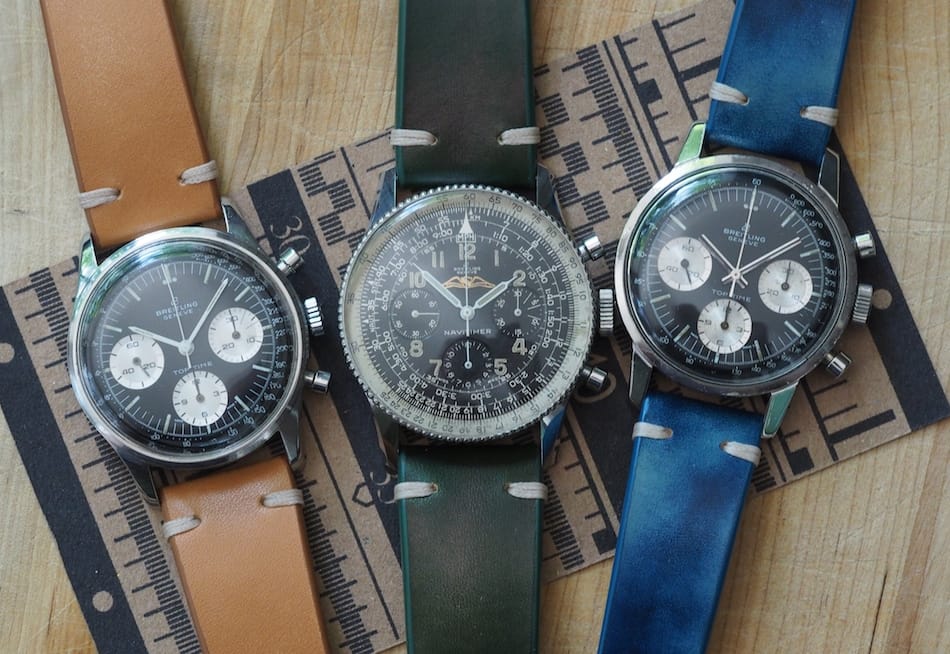 I’m not ashamed to admit that I own a lot of watches. Therefore, I have a lot of straps and I can attest that they’re not all created equally. The straps that Ben are creating for BCatt Watch Straps are somehow a little bit different than most of what’s coming out of this cottage industry – be it the colors, the choice of leathers themselves, or his attitude – and I truly enjoy them. Plus, they’re hearty enough to fit vintage sports watches. If you haven’t tried one of these straps, I’d advice you to get in touch with Ben. If you go the hand dyed route, enjoy the process of creating a truly unique combination to fit your watch. If you choose one of his other pre-colored materials, rest assured that you’ll receive something worthy of his up and coming brand.

You can reach Ben via email on [email protected]