How many of you cruise through Chrono24 looking for undiscovered gems? In between trying to find a watch I’m actually looking for, I do random price or brand searches to see what pops up. Last week, the Girard-Perregaux Richeville Chronograph caught my eye, as it’s unusual and quirky-cool. One thing, however, is blatantly clear, and that is a necessary adjustment of my collecting mind. Even as a writer, a bonafide watch journalist (that’s what I tell myself anyway), my perspective gets colored by Instagram. With the exception of interest groups, Facebook here in Scandinavia is pretty much dead. But the explosion of watches on Instagram is real.

This is a good thing, right? Well, yes and no. Yes, Instagram is good in the way it makes people actually want watches again after Generation Z grew up with naked wrists. But it’s also bad when it becomes a barrage of similar wrist shots and “iconic” designs, notably the never-ending flex of unobtainable steel sports watches and bussed-down bling. But bad is also good, as it makes gems from the ’90s and mid-late 2000s stay low in value. Especially if they have the “wrong” shape and dial configuration, as in non-round with Roman numerals. 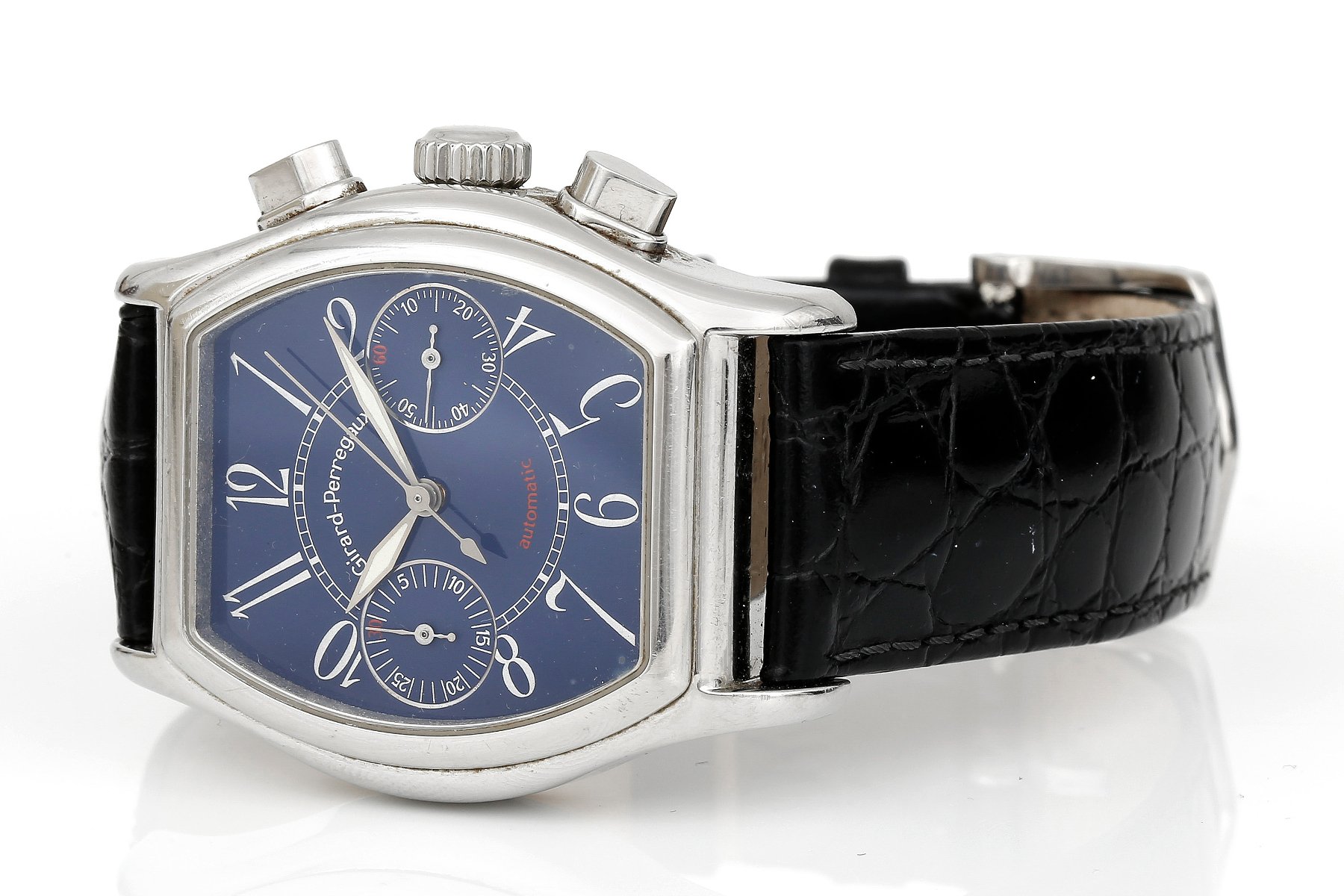 Now if this isn’t a perfect example of a pre-owned luxury bargain, I don’t know what is. Why is it a well-kept secret? Well, it has the three pre-requisites of being unfashionable. First, it is not round, or even unfashionably rectangular (Cartier is the only exception). Instead, it is a swoopy tonneau shape. I had forgotten that shape entirely, but it’s very similar to a Cartier Tortue. Second, the case is all-polished, exhibiting neither cool angles nor any brushing for contrast. And third… oh, the shock! Oh, the horror! Many of the references have Roman numerals that have been pad-printed, not applied. This combination means that these have a pre-owned price of €2,200 to €4,000. Is that a bargain? Well, the lowest-priced Girard-Perregaux chronograph today is the 38mm Laureato at $15,100, while a time-only 1966 is $8,300. A Cartier Tortue Chronograph starts at close to $50,000 pre-owned, a sobering figure. 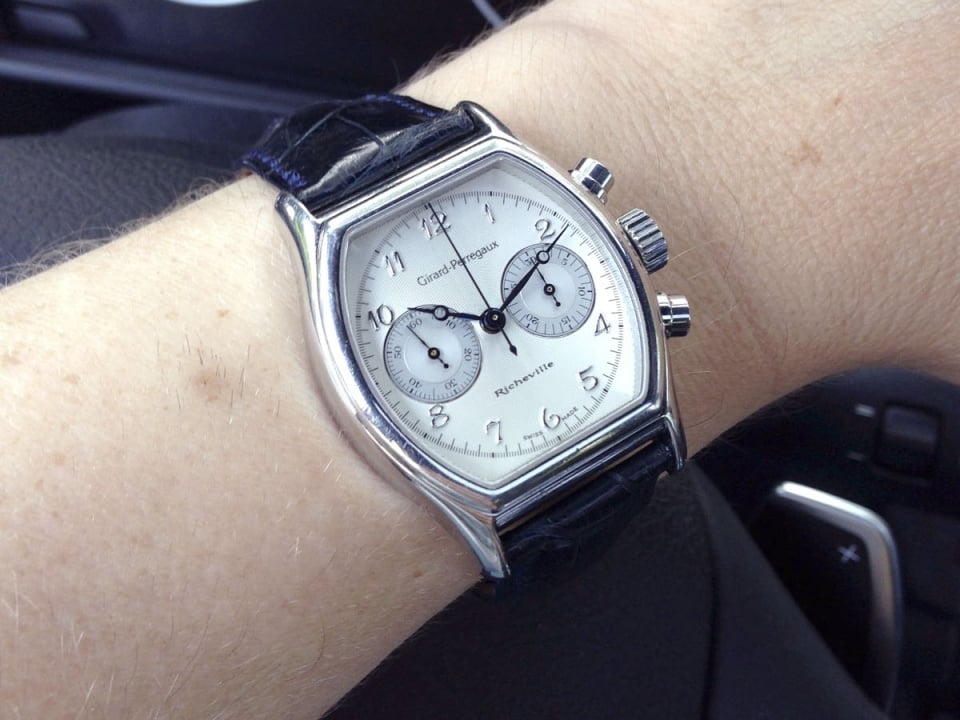 When were they produced and are they Millenial-sized?

Well, the Richeville used to be a successful range for Girard-Perregaux. Produced for almost 20 years, starting before the advent of social media and FB groups, you’ll find them by accident. Sure, the swoopy look is an acquired taste, but small and dressy chronographs are few and far between. And, unlike a few other well-kept secrets, they are vintage-small in size, just as we like’em. They vary in execution from a baby Franck Muller big-numeral look to a classic guilloche dial — take your pick. The purest of the lot might be the ref. 2710 with a Lemania-based manual wind movement. One of my faves has a gorgeous silver dial with snailed guilloché and recessed chronograph registers. Applied Arabic numerals sit in nice contrast to the black print and a sweet set of Breguet hands. On Chrono24 you’ll find one at less than $2,400. Its large, round pushers lend it a sporty flair, even in the more common Roman-numeral model. But, be prepared for a knock-out of epic proportions if you actually fall for this small chronograph. I am fully aware that the soft, polished shape is not everyone’s cup of tea, and that’s fine. I’ve got 100% round watches in my stash, so I’m not one to push opinions on you. But get this, folks: I found a silver-dialed ref. 2710, the one you see above, for $8,629. Its clear case back and 35mm case diameter (45mm lug-to-lug) make it a small treasure. Remember, rectangular-ish watches wear larger than their round counterparts. So, even with the delight of the Lémania movement with its large balance, why is this so expensive? The clue is in the word “treasure” and the whiter glow of the case. Yes, you guessed it: it’s solid white gold. Have this serviced by your local watchmaker, given he’s well-versed in Lémania movements, and you’ve got yourself a “precious” that would make Gollum jealous. The best value out there?

I would say that this is the best-value, white gold, manual-wind chronograph from 2001 that money can buy. Period. For a safe bet, there’s a pristine-looking steel, silver-dialed ref. 2710 from 2015 for slightly less than $2,400 (seems like the going rate). It’s a great dressy everyday wearer for those of us that suit up for the office and a great conversation starter for watch get-togethers too. There are even a few popping blue lacquer-dial versions out there, with a tachymeter that has red accent numbers at the dial quadrants. These have crisp white printed numerals and white Breguet hands making them sporty and fresh. Go for the ref. 2750, and you’ll get an ETA-based automatic with charmingly oblong pushers. I love the look of the pushers, which are slightly too large for the case size, and they will also make this 35mm watch wear larger. A strong case for the tonneau shape

Me, I keep coming back to Chrono24, as the hunt is sometimes even better than the actual package-opening endorphins, right? For me, the Richeville does stand out as an example of a Girard-Perregaux that lost its way in the 2000s. But along with it came quirky-cool references like the Richeville, which ranged from Cartier-esque classicism to quirky Muller-ish big numerals. They embody smooth, understated comfort with a truckload of charm. Start off with an ETA-based automatic, and you’ll find astounding value. You’ll even find white gold for less than $9,000 — pinch me! And should you have hankering for solid 18K rose gold with a guilloche dial? That’ll be $6,500, sir. To answer your question, yes, of course, I saved my search. With all notifications enabled.

Do you have a well-kept secret to share, or do you have a hidden stash of Girard-Perregaux Richeville references lying about? Share your thoughts and dreams in the comments below.