That Day My Holy Grail Arrived – The Cartier Tortue

These may be strong words, but we’re talking about a watch, that I have been searching for years. There are other models in the current collection that should be higher on my wish list, but these are far out of my reach. So for the next few minutes I will bore you about the Tortue, a watch that was designed by Louis Cartier in 1912 and has been in the collection, for over a century, in fairly small production runs. 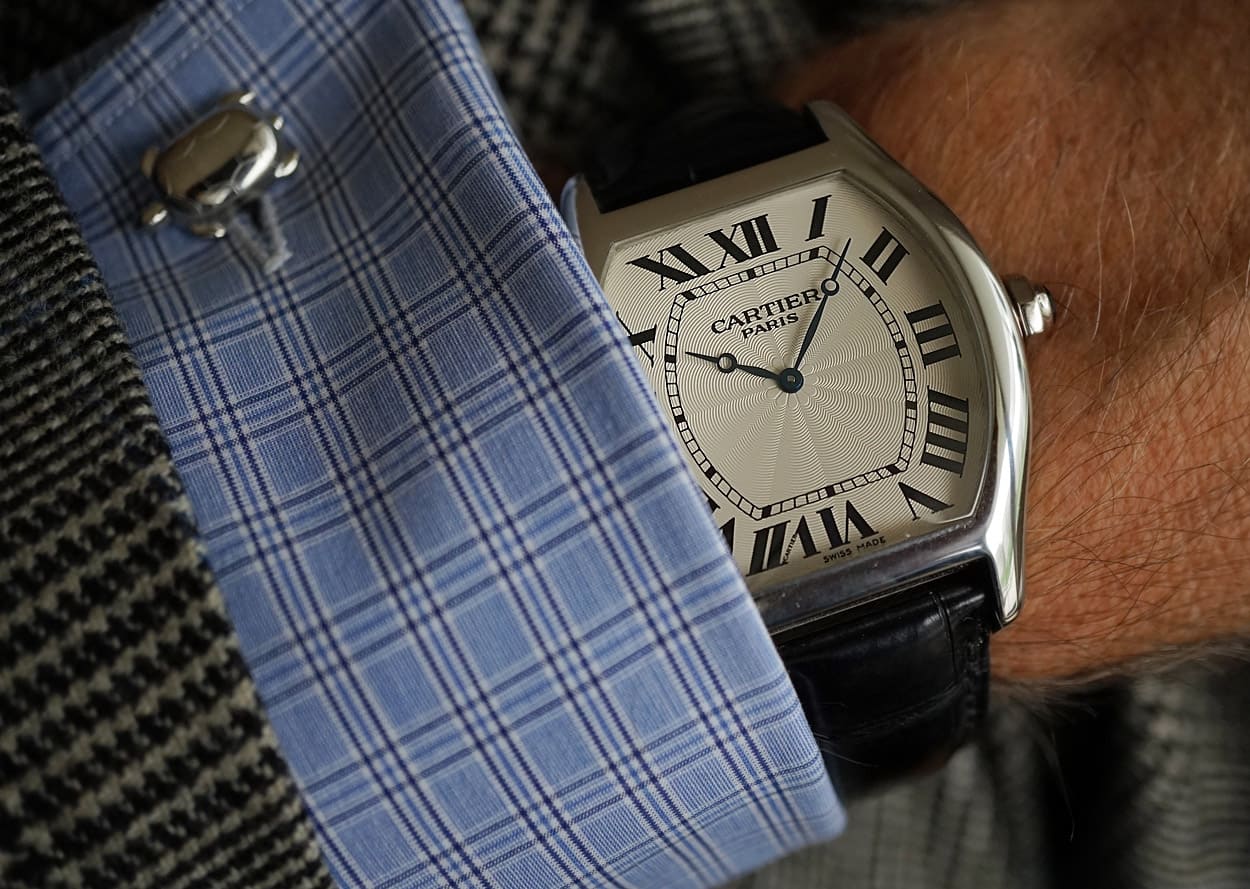 The Cartier Tortue is quite exclusive and has been produced in precious metals only. The version I was hunting for was the XL, a Cartier Tortue model that was released in 2006, in platinum and in pink gold, with the mechanical 9601MC caliber, made for Cartier by Jaeger-LeCoultre. This Cartier Tortue was produced in less than 100 pieces and sold out in a jiffy at that time. It was however not a Limited Edition. Let me explain why it had to be this particular one. 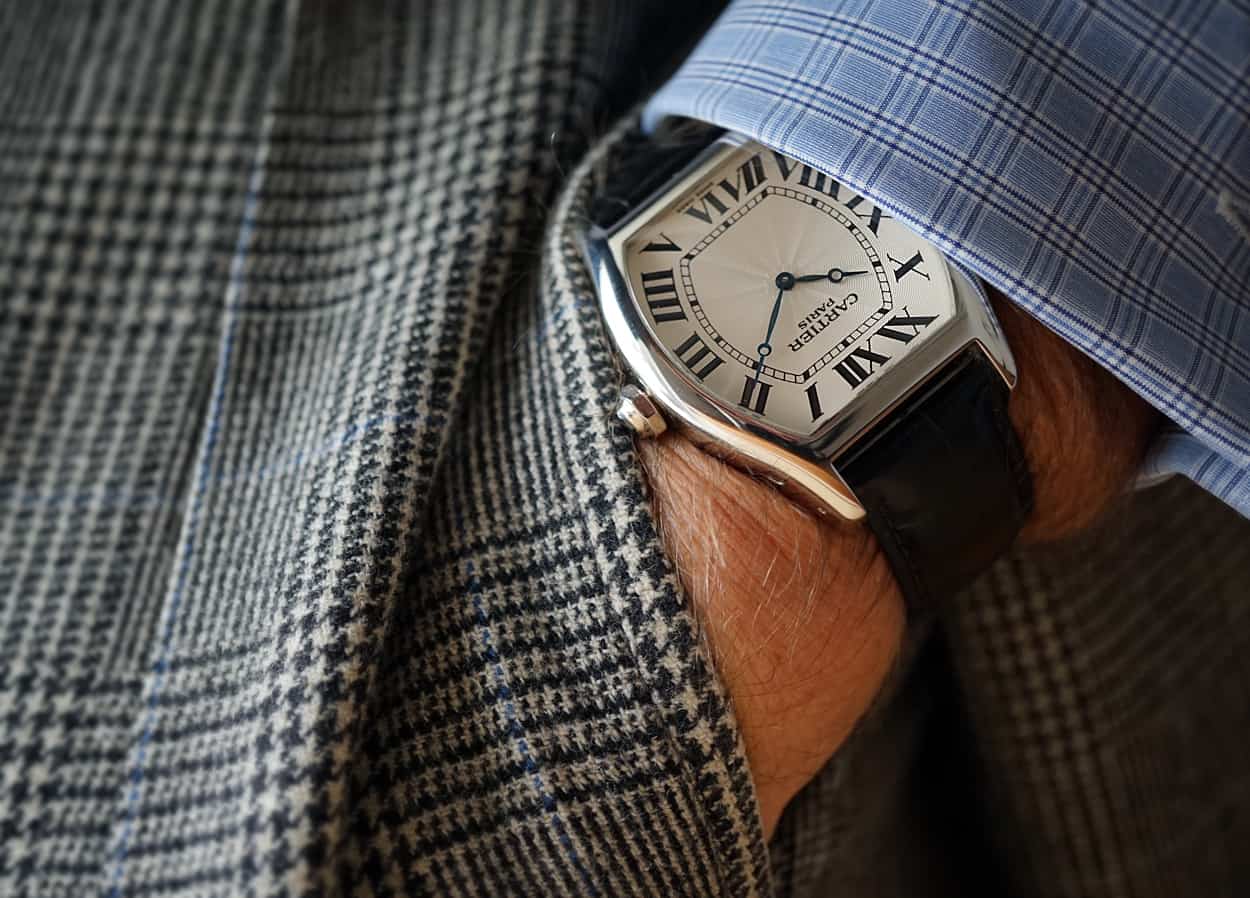 Cartier Tortue on the wrist

Normally I tend to prefer small watches, it’s as simple at that, but in the case of the Cartier Tortue, the XL version struck me from the moment it appeared on the market, spring 2006. It seemed that all the proportions were just right and to my liking. On the wrist it feels like no other large watch, due to the shape of the case and the domed crystal. Now, don’t think that the Cartier Tortue XL is a really huge watch, like a Santos 100 for example, as it’s not and actually when it’s compared to the popular Tortue Mono Poussoir in the L version, it is not that much larger. For bigger watches, like this XL, I definitely prefer any white metal, to pink- or yellow gold. Just because I find it easier to wear, in this part of the world. The serene white metal case and the creamy guilloché dial, with the vintage flower rosette in the center, gives me goose bumps every time I look at it. The flower rosette is a beautiful style element that was used on various watches in the twenties and it was a great idea to bring it back for these historical watches. Together with the blarge blued Breguet style hands, it breathes a certain class and elegant masculinity:  a combination that’s not always easy to find when it comes to large watches. While I don’t qualify this watch as a dress watch, the Cartier Tortue may however desire a tenue de ville outfit, to really stand out. 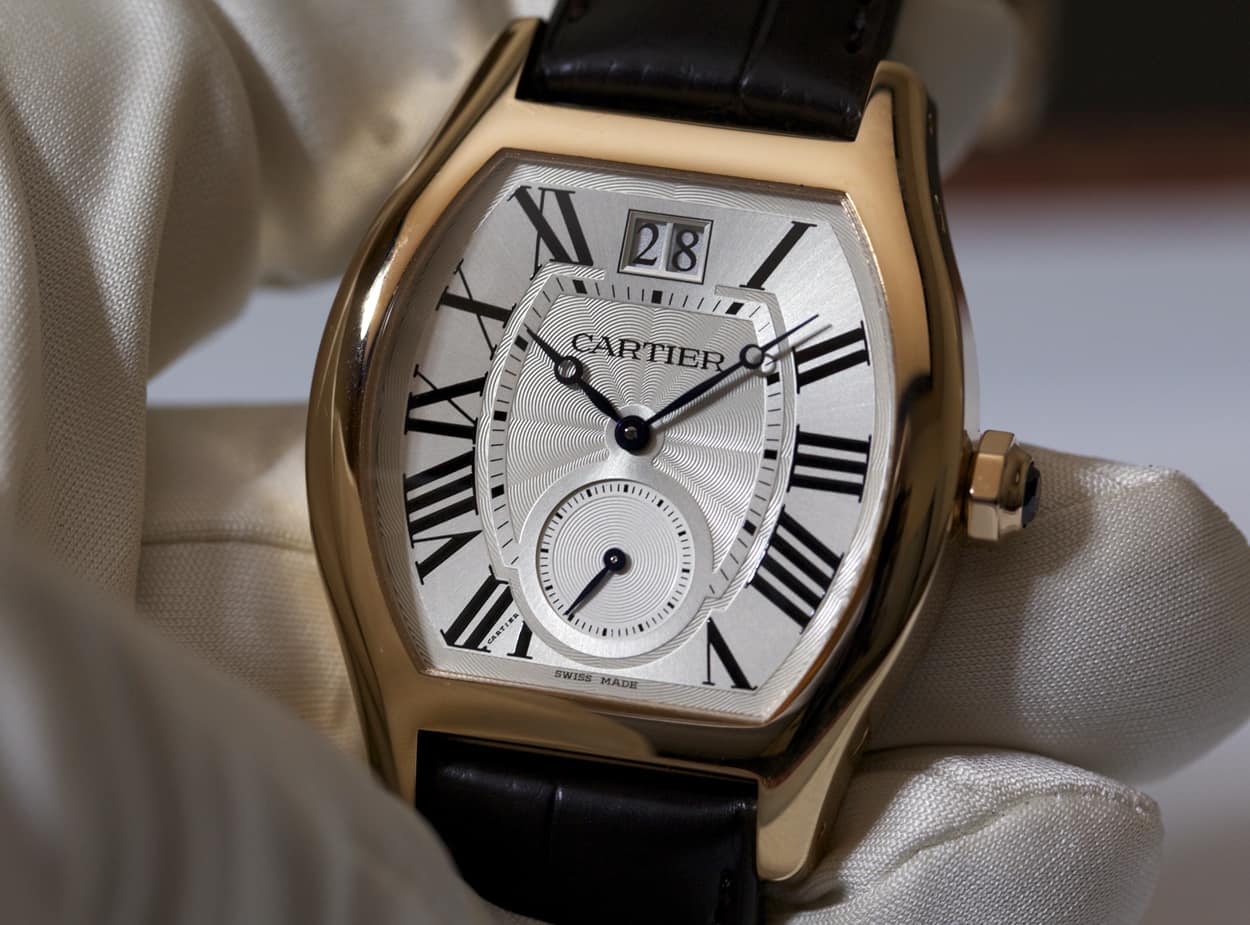 When Cartier announced a new version of the Tortue XL in 2011, my hopes were high. This new model came in pink- and in white gold, powered by the mechanical 9602MC caliber. This is an altered 9601MC movement, now featuring a big date at 12 o’clock;  a really smart looking mens watch. 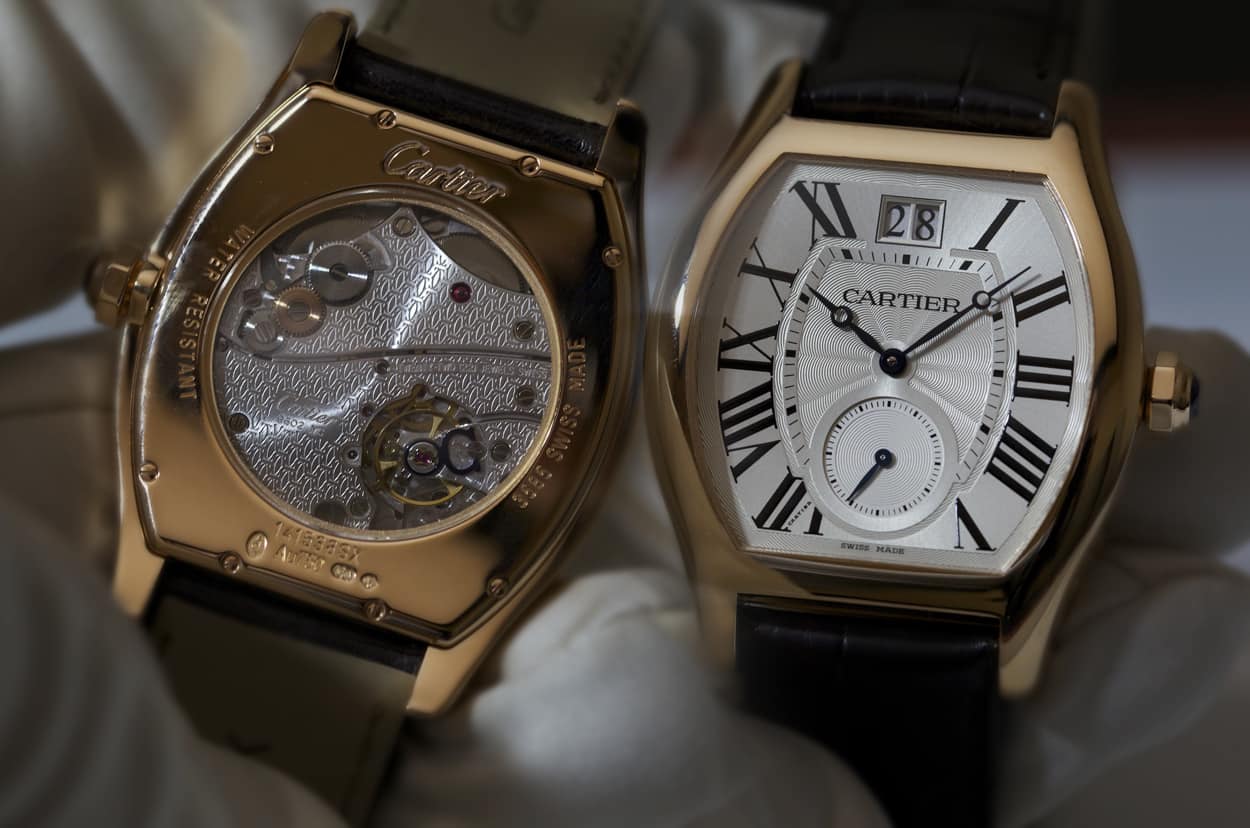 But…….I don’t do dates and I am sure that I am the only person in the world, that dislikes date windows so much. Pointer dates yes, I wish they were used more often, but I just can’t see square cut outs in a classic dial. So I had to start hunting for the older version, of which less than one hundred pieces were produced of. It was not a limited edition, just a numbered small production run. For most collectors and Cartier enthusiasts the good news is that the second difference – between the older and the new model –  besides the movement of course, is that sweet small seconds located at 6. This small complication looks absolutely stunning! It reminds me of the Tortue Minute repeater from around 2001. 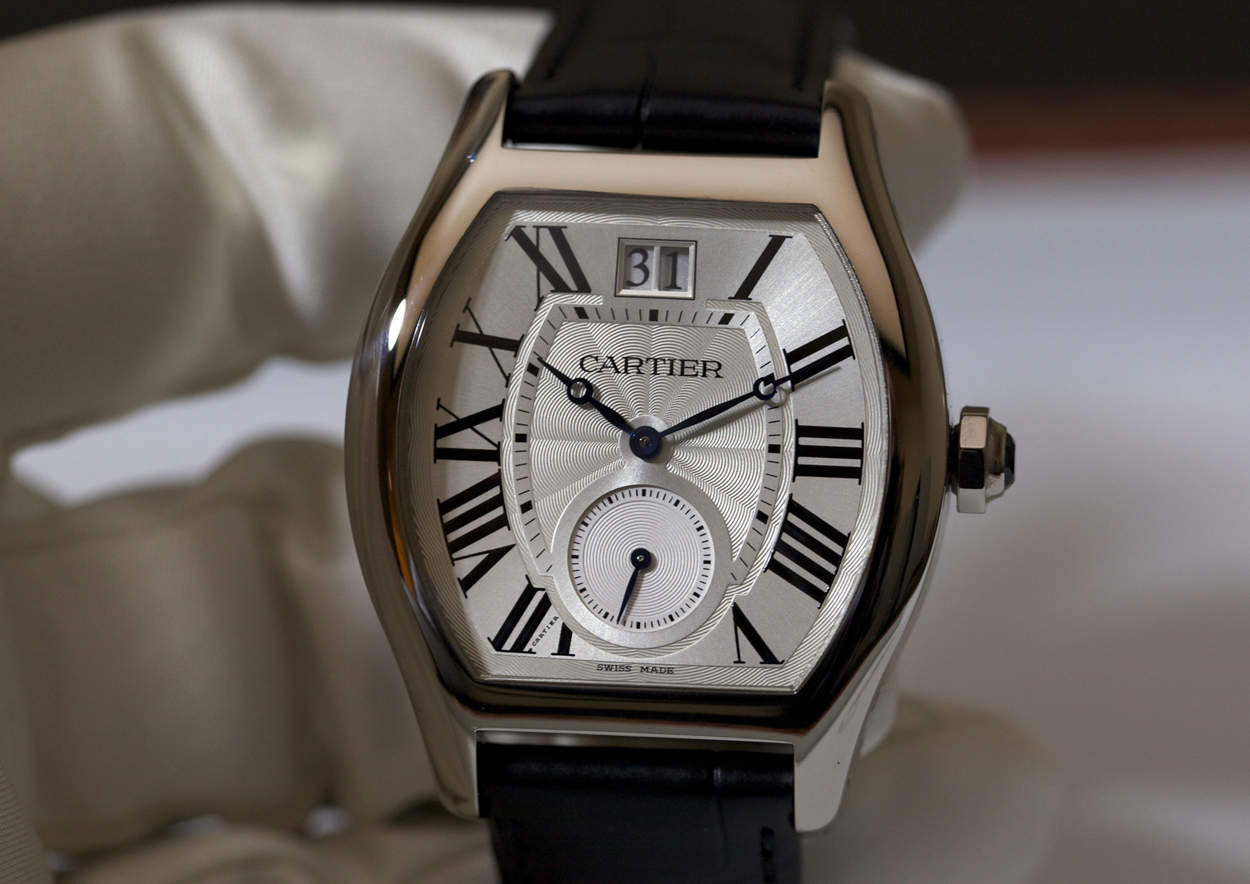 The shape of the case and the case dimensions of both Cartier Tortue versions are identical, while the Breguet style hands of the new Tortue look slightly more prominent, or more fat so to say, which looks really good. Even the decoration of the movement, that can be seen through the sapphire glass backs of both models, look identical. I am convinced that for most men, this new version is probably the better and for sure, more useful model. The Grande Date, located at 12 o’clock, is very clear, looks powerful and gives this smooth Cartier Tortue a more masculine touch than the older version, while the small seconds makes the watch less static and it also looks way cooler than a central seconds hand, that we see on almost any watch these days.