If you fancy a sartorial sports watch from Bvlgari for Seiko money, then step right this way
Thor Svaboe
comments 18
Share

I have one item that means more to me than any of my wrist-buddies, and that is my Bvlgari wedding ring in white gold. My Italian wife has a strong influence on me, and I was well aware of Bvlgari as a part of the Italian national identity. Then the Octo Finissimo hit the scene, and everything changed. But do you remember the original Bvlgari Aluminium, the Diagono?

Let’s be fair. When you consider the rocket-like ascent of Bvlgari as a watchmaker, until recent years, it was still a jewelry brand. Yes, Bvlgari happened to have a line of watches. For many younger enthusiasts, though, they just didn’t cut it. But unlike some Rollie-flexing Instagrammers out there, some of us recognized the sweet-priced Bvlgari Aluminium as a twenty-year-old classic reborn. 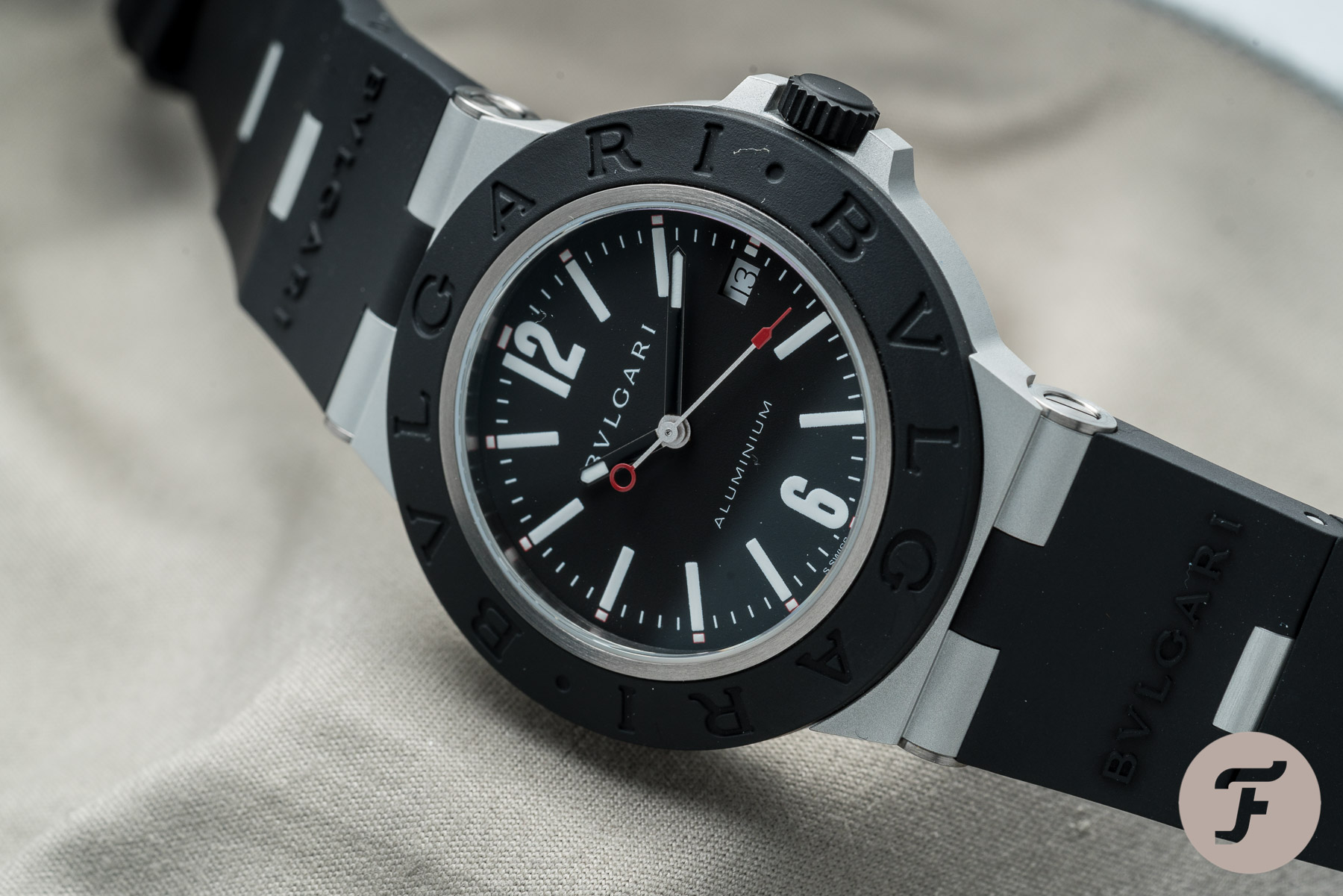 The entry ticket to Italian style

It’s as simple as that. A brand-new Bvlgari Aluminium is a €3,000 ticket to a world of Swiss-made, deeply Italian style, and it made waves back in 2020. It’s a minimalist and very different sports watch in unfeasibly light aluminum with a particular bracelet. It might seem plastered with logos, but on black rubber, the branding is more understated than you’d expect. And if you think the Rolex Oysterflex lays claim to being the first rubber bracelet (not a strap), Bvlgari actually invented that concept. This is a rubber bracelet with links(!) held together with aluminum and steel pins, and boy does it feels odd. It sort of drapes around your wrist, feeling like a piece of lightweight rubber armor. Aluminum might not be the strongest material for watch cases, but if you thought a titanium watch was light, get a load of this. 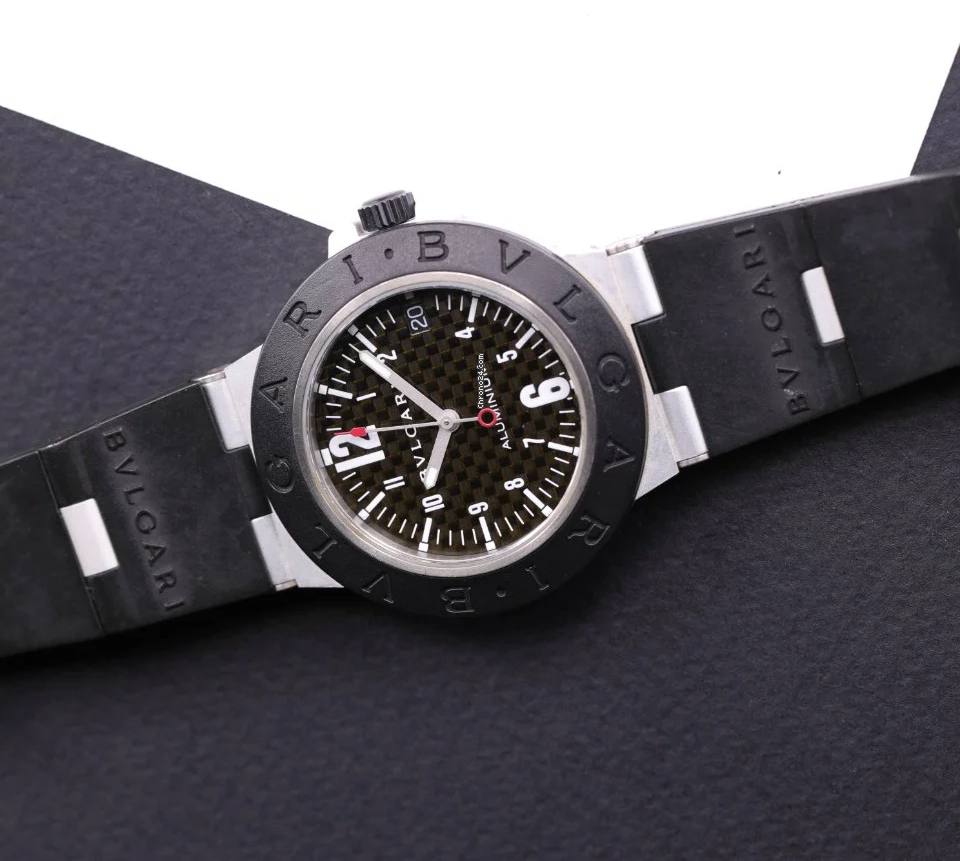 But this is all about the original Bvlgari Aluminium, right?

Yes, but I had to give you some perspective. This ETA-powered series has the uncompromisingly elegant language of Bvlgari with a casual flair. And while the entire range of white- or black-dialed Bvlgari Aluminium references are some of the best 40mm summer watches available, check out Chrono24. The brand-new bright red Ducati collab chronograph is achingly cool, but what if you only have €1000-1500 to spend, it’s impossible, right? Not if you check out the Bvlgari Diagono in aluminum. This is the original, now cleverly also advertised as the Bvlgari Aluminium. The same cool look with a 38mm case, and it’s a bargain piece of monochrome cool. 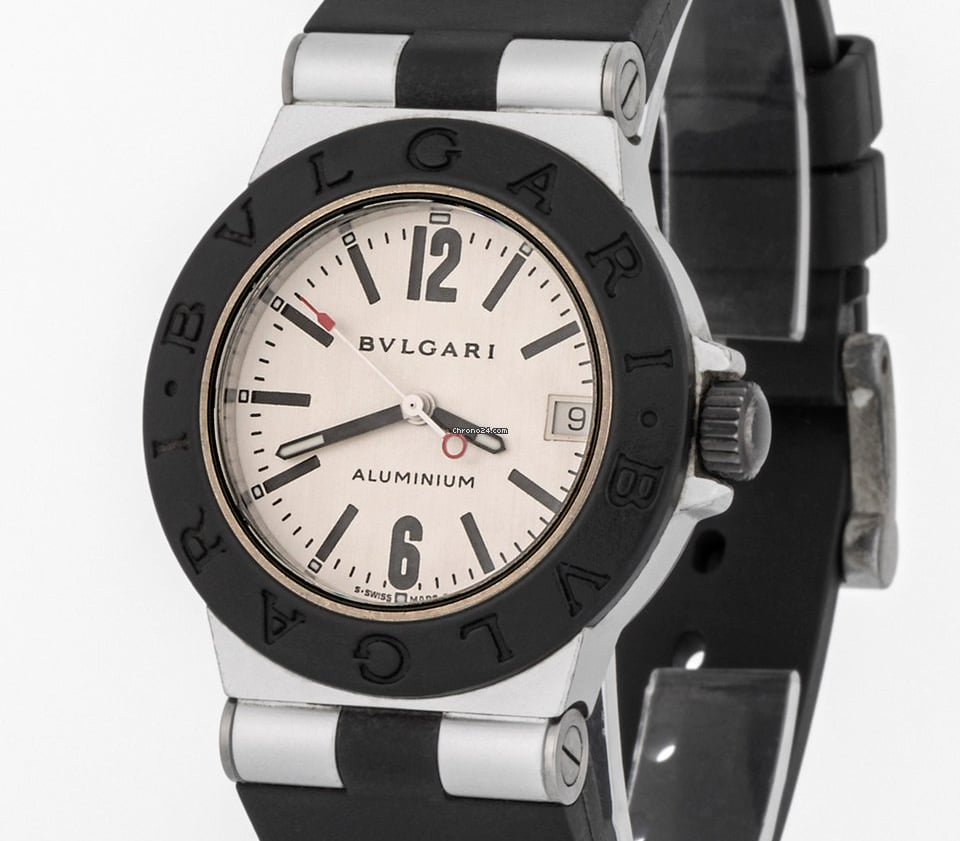 But aren’t these quartz watches?

Yes, there is a 32mm ladies’ model with a quartz movement. You can pick those up for a scarcely believable €350. I will put them in the box marked “Bvlgari Bargain Of The Decade”. But the 38mm men’s version, the basis of the highly successful relaunch, starts at under €1,000, with an example on sale at a Swiss dealer for €896 plus shipping. I will admit that even the new version doesn’t hold its value particularly well, but a cool Bvlgari for less than a grand makes for one hell of a summer watch. Just make sure of one thing. The twenty-year-old rubber strap will need checking, as you can’t clean and re-brush it like a bracelet or swap it due to the particular lugs. If it has been neglected, it will show heavy cracking, so if the shots are poor, don’t commit until you’ve seen some good close-ups. The Diagono bargains are plentiful

OK, I will be honest with you, some of the Diagono references are cheap for a reason: they ain’t all pretty. For example, the Scuba range, a different take on a dive watch, ranges from rubber-strapped cool to, erm, oddities (a nice word for them). But you’ll find a 200m depth-rated 38mm dive watch with a chronometer movement for less than €1,700. A Swiss-made piece from the purveyors of Finissimos going up to more than $100K. And while you’re at it, tick the Gold box on the Chrono 24 search filter. Yes, you’ll have yourself a 38mm solid 18K gold-cased Bvlgari with the Aluminium design for less than €5K, believe it or not. From the pre-Hublot-crazed mid-2000s, it’s the biggest-bargain gold sports watch on rubber anywhere.

So, Fratelli, have I lost my marbles, or do you feel tempted to dip into the bargain basket of millennial-vintage Bvlgari? Sweet-sized and cool, these are up for grabs and will get you noticed a lot more than that Fifty-Eight everyone is wearing.