As we’re nearing the halfway point, how has the 2022 watch landscape shaped up so far? I feel there’s been an exciting blend of high-end and low-end offerings. But if one aspect defines the 2022 watch trend, it’s the sheer number of brand collaborations — Omega × Swatch, Bremont × Bamford, and Fears × Garrick, to name a few. Today, I’ll be focussing on another development this year — plastic. This list compiles watches made of a material with a bad rep but one that is making a resurgence. Plastic is an extensive term; as you’ll see from this compilation, there are many different forms. But as plastic is ubiquitous in our daily lives, we know what’s plastic and what’s not.

That doesn’t mean these economical timepieces offer any less excitement, and as we’ve seen with some releases, hype and hysteria remain high. While life may hand us higher priorities from time to time, it’s reassuring about the steadfast watch industry. The nature of time as a healer gives us solace that no matter how bad things get, time keeps on ticking. And as a wristwatch is a great way to perk up the mood at any price point, here are some of my favorite watch releases for 2022 rendered in plastic. As we’ve seen from this year, plenty of plastic options are available, and many are budget-friendly.

Let’s start with possibly the most obvious choice. The Omega × Swatch Speedmaster MoonSwatch caused quite the commotion in March 2022. By only releasing the non-limited collection of Bioceramic (ceramic with castor-oil-based plastic instead of crude oil) Speedmasters in Swatch boutiques, the Swiss brand received both fever and furor. To this day, I cannot fathom why these were so popular. Is the regular Omega Speedmaster Moonwatch so revered that an official cut-price collaborative copy becomes as hyped as a steel Patek Philippe Nautilus? Maybe, but I suspect even Swatch was surprised by the enormous crowds and high demand for what is essentially a plastic quartz chronograph made by ETA (with a “phantom” date-setting position to boot).

This particular model is the Mission to Neptune, representing the most distant planet in our Solar System. RJ graciously picked it up in Geneva and passed it on to me in Biel at the Swatch factory while attending the first #SpeedyTuesday event since 2019. The watch stand in the picture was also a gift from Omega to celebrate ten years of the #SpeedyTuesday hashtag and enthusiastic community. At €260, the Swatch is wallet-friendly. That is, if you’re at the right time and place to collect one. The lines are slowly dissipating, though, so keep trying. Before you ask, yes, the deep blue Neptune model left blue staining on my wrist — within two minutes. However, after a few days, the staining stopped, and it hasn’t returned in the months since then. 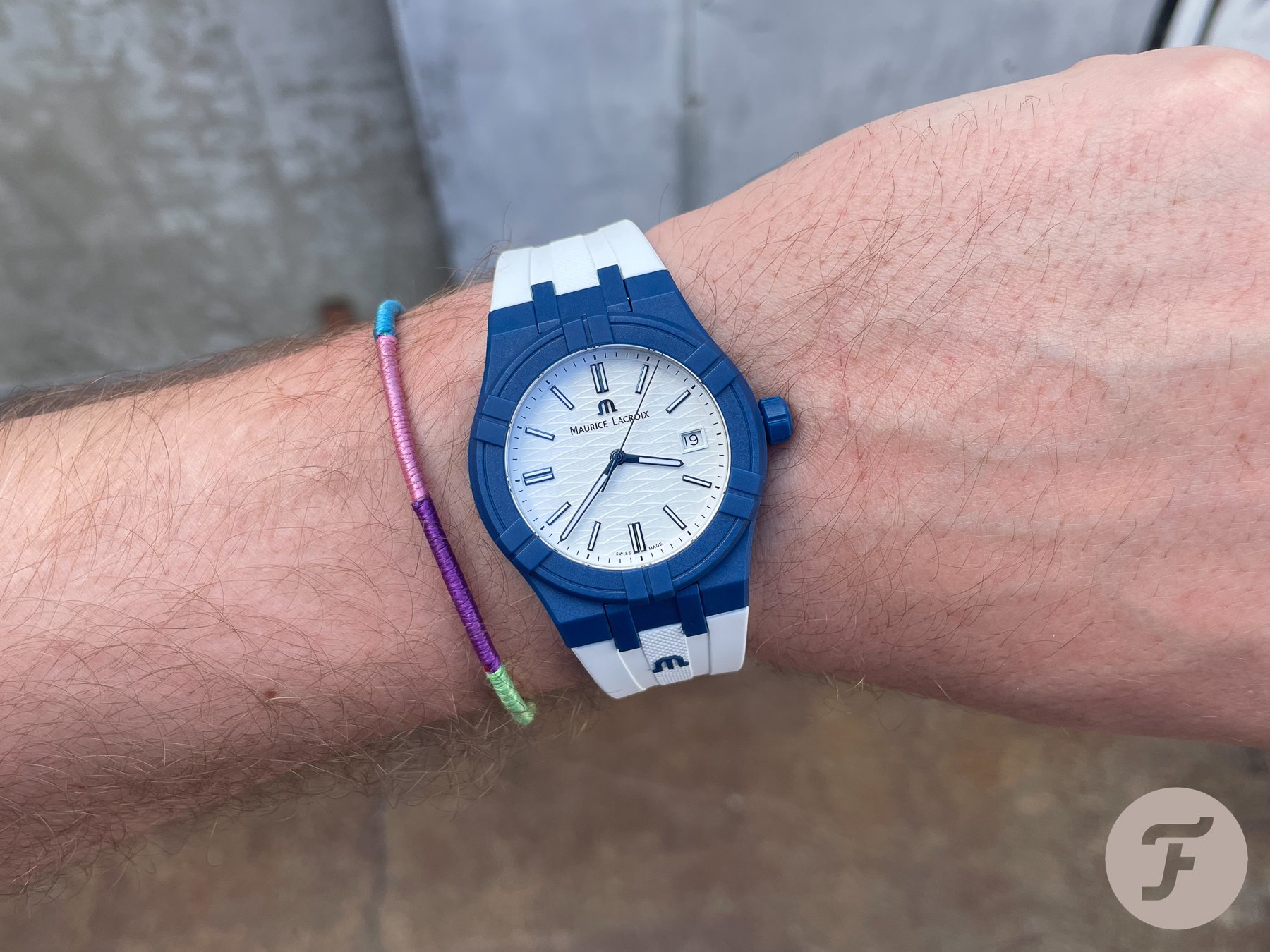 I’m on such a plastic drive because of the renewable sources now on offer. It feels wrong to praise plastics considering the oceans’ plight, but the Maurice Lacroix Aikon #Tide is produced from waste recovered from them. And no, the “#” symbol is not a typo — that’s in the name. This is due to the collaboration (another one for 2022) between Maurice Lacroix and #tide. The #tide organization proudly uses the symbol as part of its logo to spread the word on social media.

The reclaimed plastic waste materials used in this watch are ground into granules and injection-molded into the Aikon case along with a glass fiber for rigidity. It’s a simultaneous method of ridding the seas of the non-biodegradable receptacles and creating a low-key quartz piece. To match the credentials, the Aikon #tide has 100 meters of water resistance for €690. 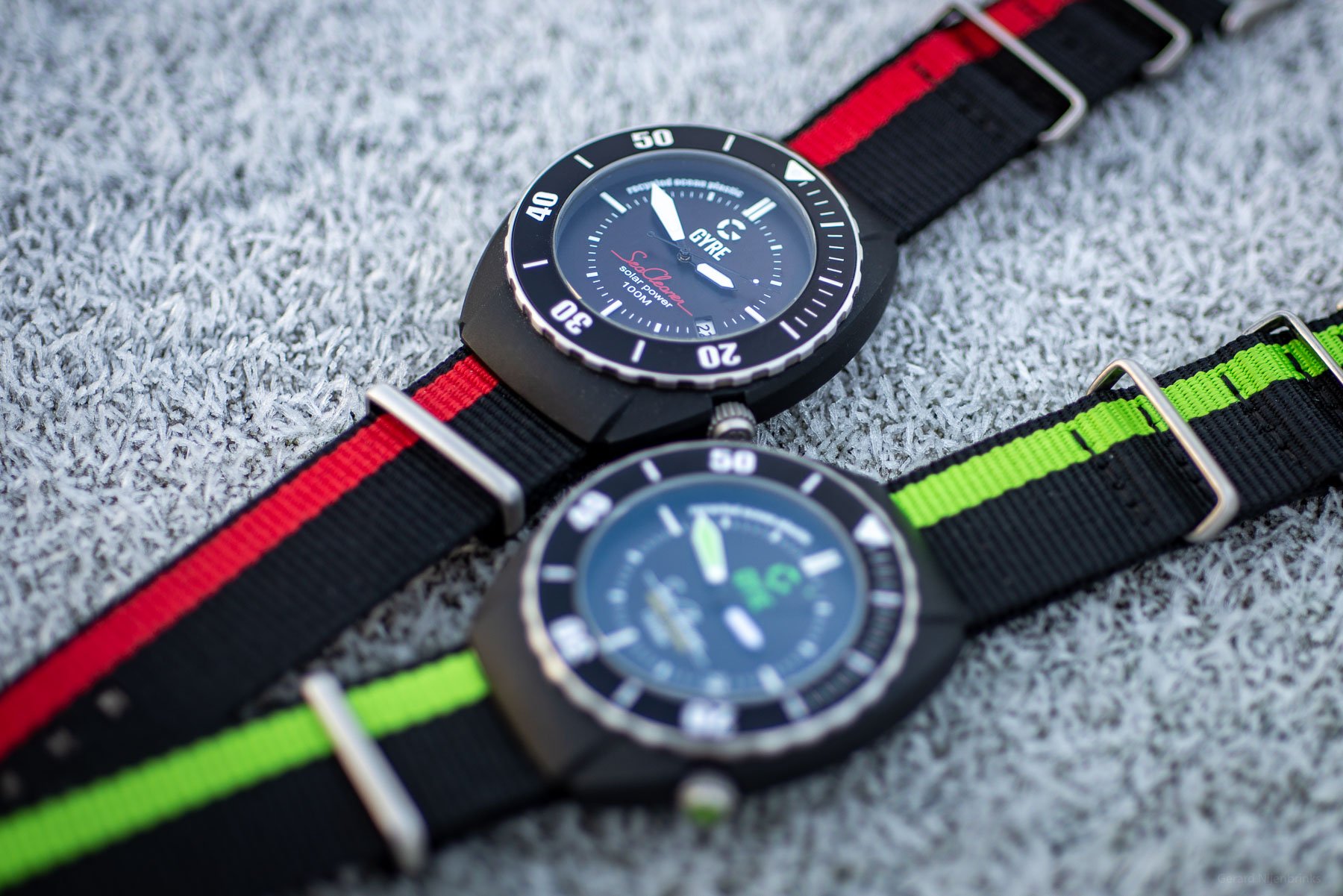 Maurice Lacroix is not the only one reclaiming waste for upcycling. Indeed, it must be said that GYRE is the pioneer. The SeaCleaner was a 2020 launch just as the pandemic took hold but saw a soft relaunch in 2022 to highlight its mission. The young watch doesn’t focus as much on the flotsam and jetsam washing up on our shores, but rather, on the tangled web of discarded fishing nets plaguing our seabed. If you’ve seen the brilliant yet controversial Netflix documentary Seaspiracy, you’ll know the biggest threat to the sealife ecosystem is not necessarily disposable plastic products. According to the film, 46% of plastic pollution is discarded fishing lines and nets. This pollution is far more damaging to marine life than plastic straws. GYRE recognized this and created the solar-powered SeaCleaner encased in the reclaimed plastic. There’s also a choice of colors and 100-meter water resistance for €289. 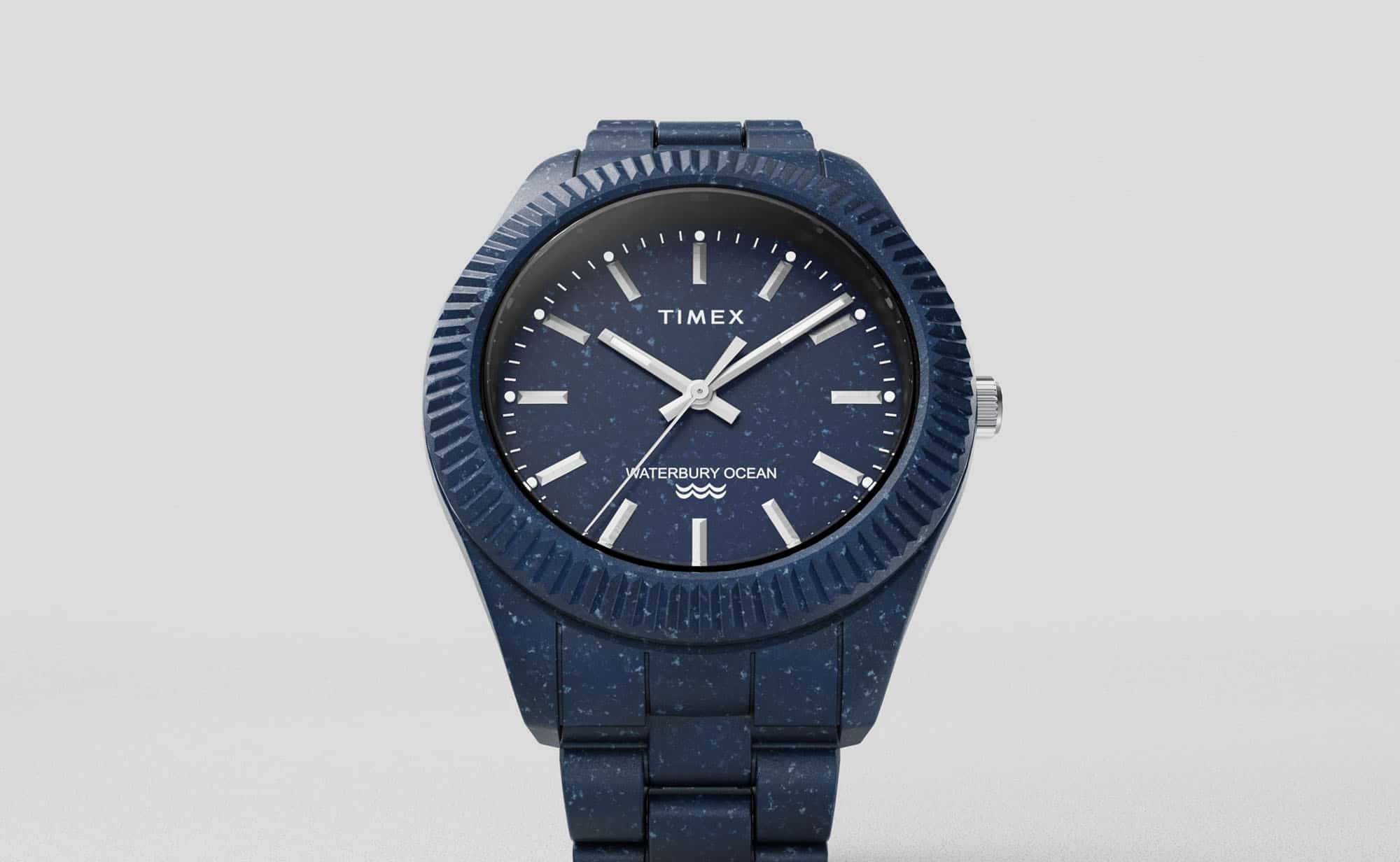 The Timex Waterbury Ocean was not a watch on my radar, but recently, I’ve learned to appreciate its design direction. It has a Datejust vibe (without the date) that’s timeless, yet the color and flecks give the game away. The material comes from the previously mentioned #tide but varies depending on the execution. The white particles within the deep blue case remind me of the view when dipping your snorkeling mask beneath the sea’s surface. Its style reflects an endless body of water, diminishing the scale of human colonization yet demonstrating the far-reaching impacts of our wasteful ways. The low price of €99 naturally excludes the bells and whistles of an automatic movement. I must say, however, that the 30-meter water resistance is disappointing, especially considering the theme. 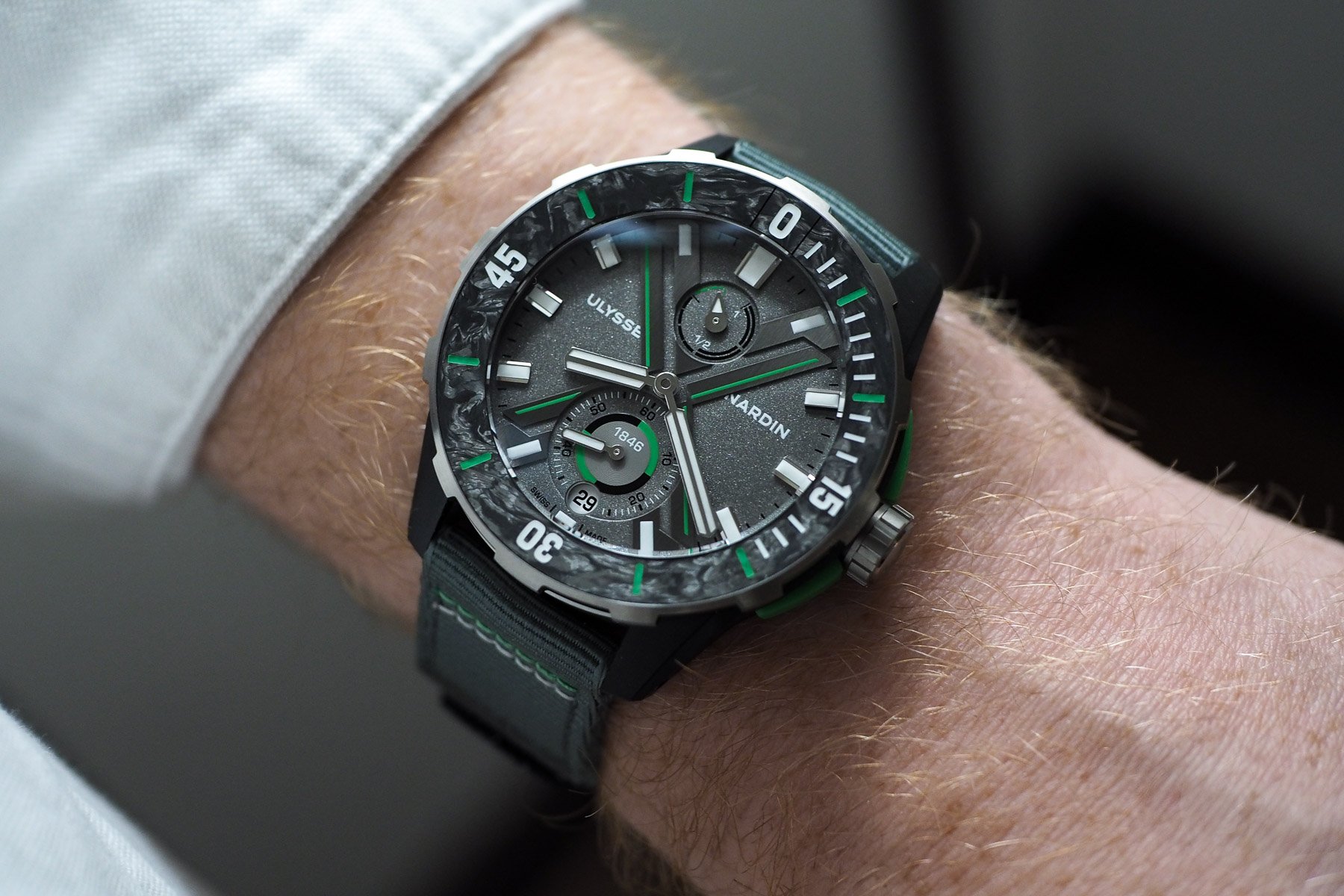 For the last watch on this list, I’m going a little more premium. Ulysse Nardin dedicates its branding to all things nautical. Whether that lands with audiences is up for debate, but I dig the aquatic concepts myself. Perhaps it’s my love for sailing and seeing the miniaturized winches, booms, and teak decks executed for time-telling. It certainly deals a shot of nostalgia. For this final watch, Ulysse Nardin pays back the ocean’s mystique by reclaiming discarded fishing nets for its watch case. With a consortium of sustainable suppliers, Ulysse Nardin also ensures each element, not just the case, is using waste rather than adding to it. With 300 meters of water resistance and a Carbonium dive scale bezel, the Ulysse Nardin The Ocean Race Diver is the most capable nautical watch on this list. You certainly pay for it, though, at €10,400 with a limited run of 200 pieces.

These are my picks, and I hope you enjoyed them. There’s a bound to be a fair few options I’ve missed, so let us know in the comments section. Can you see more brands following the renewable plastic trend? Breitling uses similar plastic waste for packaging, and Oris created the reclaimed PET medallion dial for the Upcycle. Time will tell if either brand ventures into watch cases in the same material.