Breaking Down The Brand TAG Heuer: Watches For Racing Legends Like Ayrton, Max, And Mario

It’s all about motorsports. Heuer was synonymous with them, even before it became TAG Heuer in 1985 when the company founded in 1977 by Akaram Ojjeh bought the Swiss watch manufacturer. Techniques d’Avant Garde (TAG) and Heuer were already very active in the fast-moving and glamorous world of motorsports, and the new, combined entity only strengthened the bond further. The legendary Ayrton Senna helped TAG Heuer rise up after the Quartz Crisis, and the reigning Formula 1 champion Max Verstappen also wears the red and green badge. So does Mario, by the way. American F1 world champion Mario Andretti? No, Mario Kart. Is the brand taking things too far with that? Is there still original Heuer DNA to be found in the current LVMH-owned company? And is the Connected really a smart choice? Today, we’re breaking down the brand TAG Heuer.

For over 160 years, (TAG) Heuer searched for and found innovative solutions to measure time. Technical highlights include the oscillating pinion for mechanical stopwatches in 1887, the first mechanical stopwatch accurate to 1/100th of a second — the Mikrograph — in 1916, and one of the first automatic-winding chronograph movements — the Calibre 11 — 1969. In 2015, TAG Heuer also launched the first luxury smartwatch, but more about the Connected and how it’s connected to the brand’s origins later. The current collection of the La Chaux-de-Fonds brand contains watches with famous names designed by Jack Heuer. There are the Carrera, Monaco, and Autavia collections, and there’s also a recently introduced, futuristic version of the Monza. Besides the vintage-inspired timepieces, TAG Heuer also has the Link, Aquaracer, Formula 1, and Connected collections. The Carrera and the Connected are very different, and yet they’re not. I will try to explain. 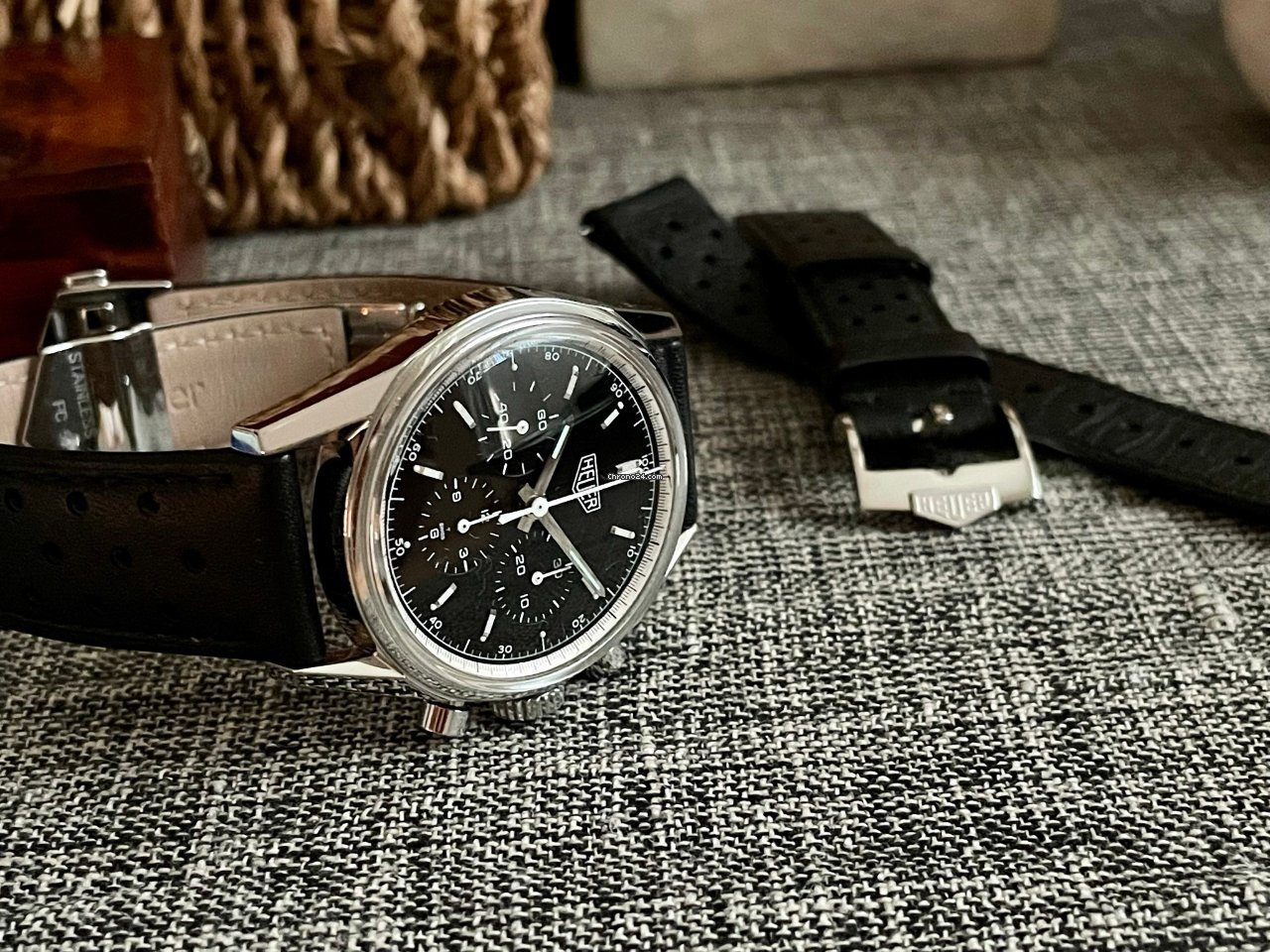 Breaking down the brand TAG Heuer: A charismatic mix of style, fuel, and adrenaline

What resonates best with the current watch crowd — the story of the 1960s Carrera, Ayrton Senna wearing a two-tone S/el, Max Verstappen and his branded limited-edition chronographs, or Super Mario? Apparently, all of the above to all kinds of subgroups in the watch crowd. Having a retro-styled mechanical Carrera chronograph in gold and black John Player Special colors next to a Connected E4 Porsche Edition that runs on Wear OS by Google seems schizophrenic, but it actually makes perfect sense in the TAG Heuer world. It’s all about the point in history when you got introduced to the world of the brand, a charismatic mix of style, fuel, and adrenaline. 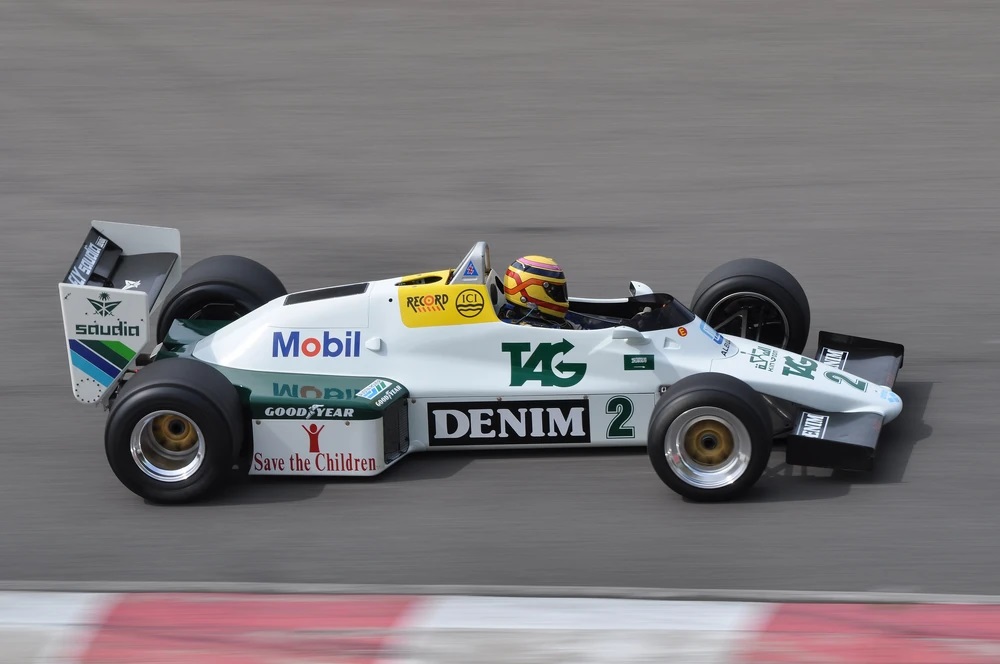 When it comes to TAG Heuer, I have two very visual memories. The first is Keke Rosberg — the flying Fin with the mustache — standing next to his white Williams GP Formula car in the 1980s with the angularly woven TAG logo prominently present. The full name Techniques d’Avant Garde was a mixture of mystery and power that resonated with me. The second mental picture I have is the TAG Heuer logo on a red and white Marlboro-sponsored McLaren. In 1983, TAG co-developed the TAG-Porsche V6 engine for McLaren. And after TAG acquired the watch brand Heuer, the TAG Heuer logo appeared for the very first time in 1986. A McLaren with a TAG Heuer logo was a common sight for three decades, and this logo now adorns the dominant Red Bull cars.

Is the diversity confusing you?

TAG-powered Keke Rosberg planted my TAG Heuer seed. But for others, it was perhaps the very first Carrera of 1963 that Jack Heuer named after a grueling car race in Mexico. It could also be a 1970s red Ferrari with a Heuer badge on the front of the race car — by the way, every Ferrari driver wore a Heuer patch on his race overalls and a gold watch on his wrist engraved with his blood type. For others, it was Ayrton Senna in the 1980s and 1990s, wearing a sleek and smooth TAG Heuer while racing in a TAG Heuer-sponsored McLaren. For younger fans, it might be Max Verstappen dominating in his Red Bull car, powered by a TAG Heuer-labeled engine while wearing a TAG Heuer watch. But it could also be the love for the Nintendo’s Mario that brings people into the luxury-watch universe.

Steve McQueen in the movie Le Mans wearing a Monaco

My point is that, in the current collection, there are plenty of strong, emotional connections to different generations. The diversity may seem schizophrenic and confusing from a distance, but within the different universes of the collection, everything makes sense. And even from a historic point of view, an automatic chronograph, a Mario Kart Tourbillon, and a battery-powered smartwatch carrying the TAG Heuer label have a lot in common. 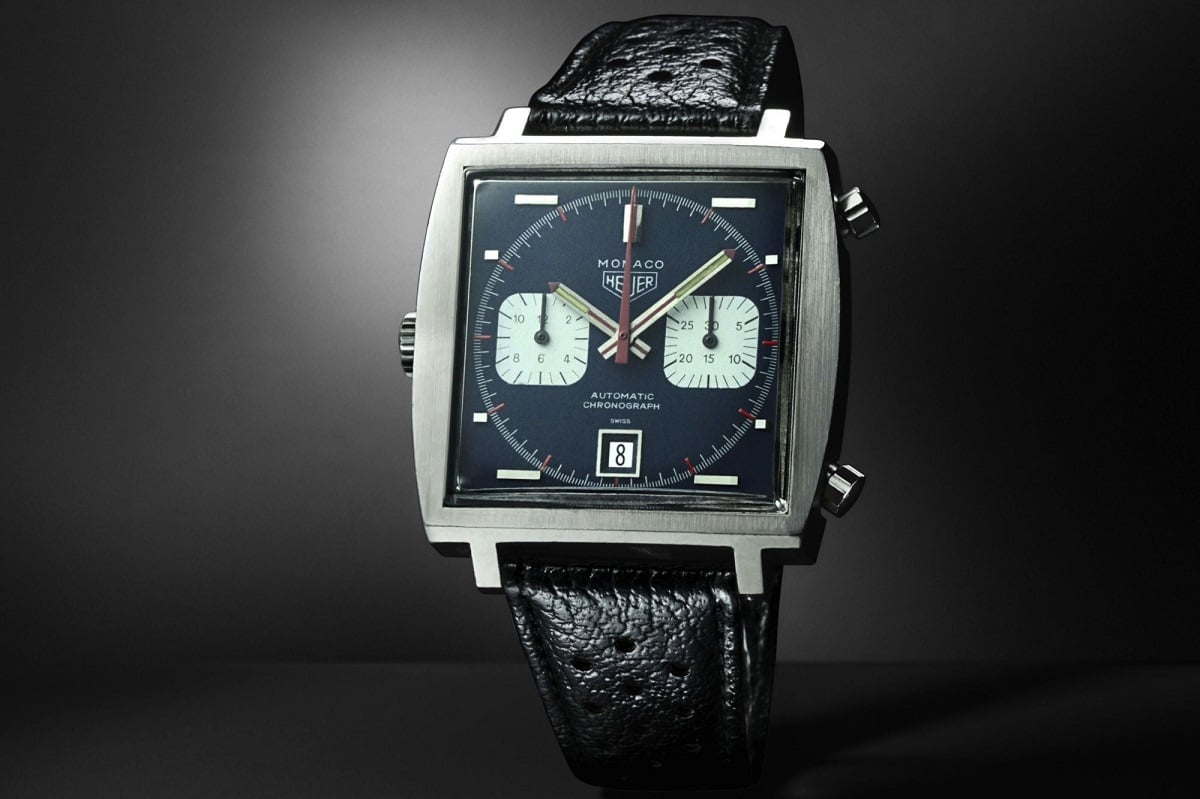 The original Heuer Monaco from 1969

Motorsport was always of the highest importance for promoting the Heuer brand and its successor TAG Heuer. But seeing Mario Kart models appear most recently had me thinking about the brand and where it stands. Watch purists tend to look at pre-Quartz Crisis watches with a technical eye. But the square Monaco, rounded-square Silverstone, and oval Monza, for instance, also had a fashion angle. Let’s talk about the Monza because TAG Heuer recently released a carbon fiber, open-worked version named the Flyback Chronometer (€13,350) and because it tells a nice story. 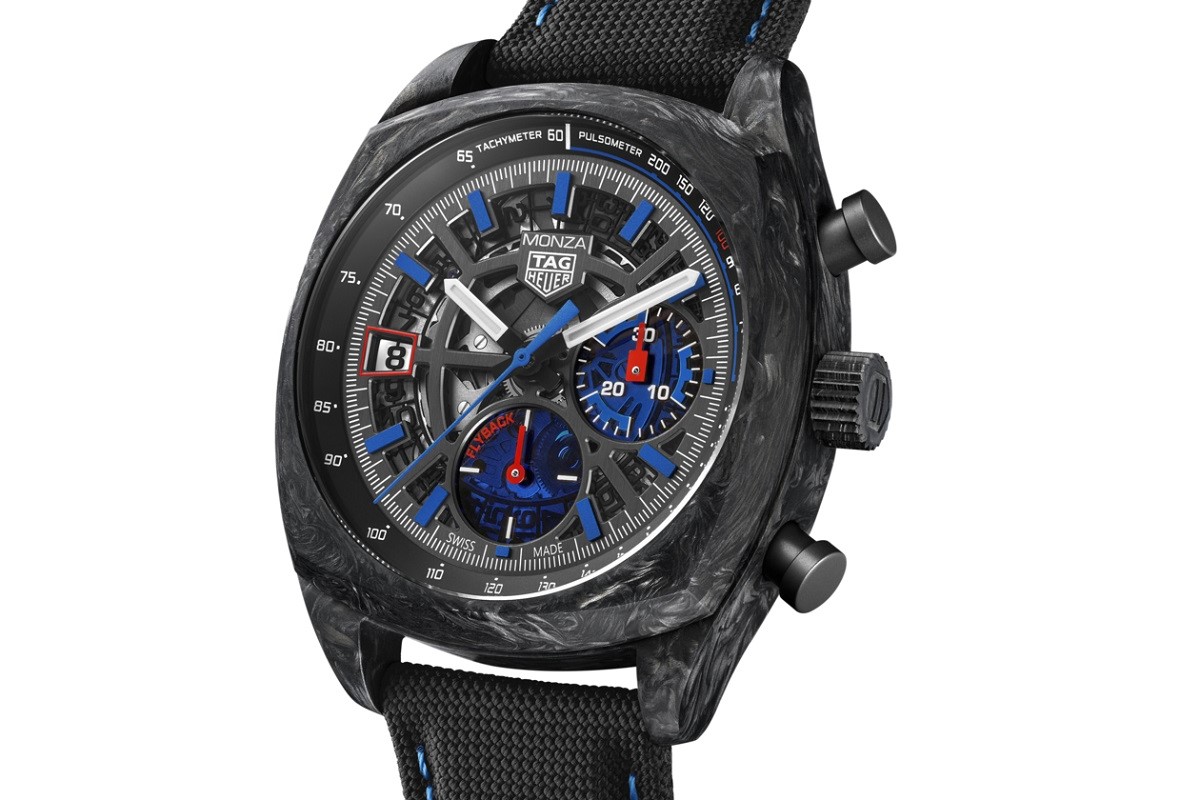 The latest iteration of the Monza

The original Heuer Monza with its carefully styled shape debuted in 1976 and celebrated Niki Lauda’s 1975 F1 world championship, the first Constructors’ title for the team, and the first Ferrari driver’s title since 1964 when John Surtees was crowned world champion. The intended name for the chronograph was Modena after the hometown of Ferrari, but it was named Monza after the famous high-speed circuit was deemed better.

Just as fashionable was Ayrton Senna’s daily watch, the sleek, two-tone, analog-digital S/el (a rather strange abbreviation of “sport and elegance”) on a brown leather strap. The Brazilian phenomenon appeared in TAG Heuer ads and also had the brand’s logo on his racing suit and his McLaren F1 race car. The S/el oozes 1980s style and fits the fashion of that era perfectly. 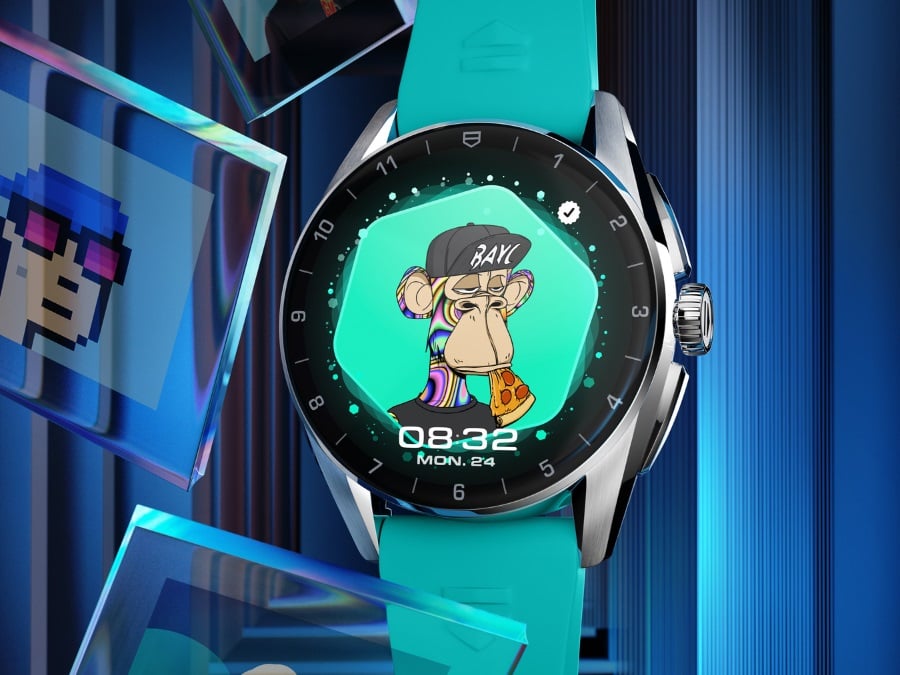 Can you guess what fits the current era perfectly? Watches with links not only to present-day racing heroes and icons of pop culture but also to current tech. And TAG Heuer has it all. After three decades of sponsoring the dominant force in F1, McLaren, and winning titles with Alain Prost, Ayrton Senna, Mika Häkkinen, and Lewis Hamilton, the brand is now siding with the current dominant team, Oracle Red Bull Racing. It’s also on the wrist of the reigning and next world champion Max Verstappen. TAG Heuer has Nintendo’s one and only Mario on the virtual payroll too. And with its Connected collection, the brand follows the latest technological developments in a luxurious fashion. 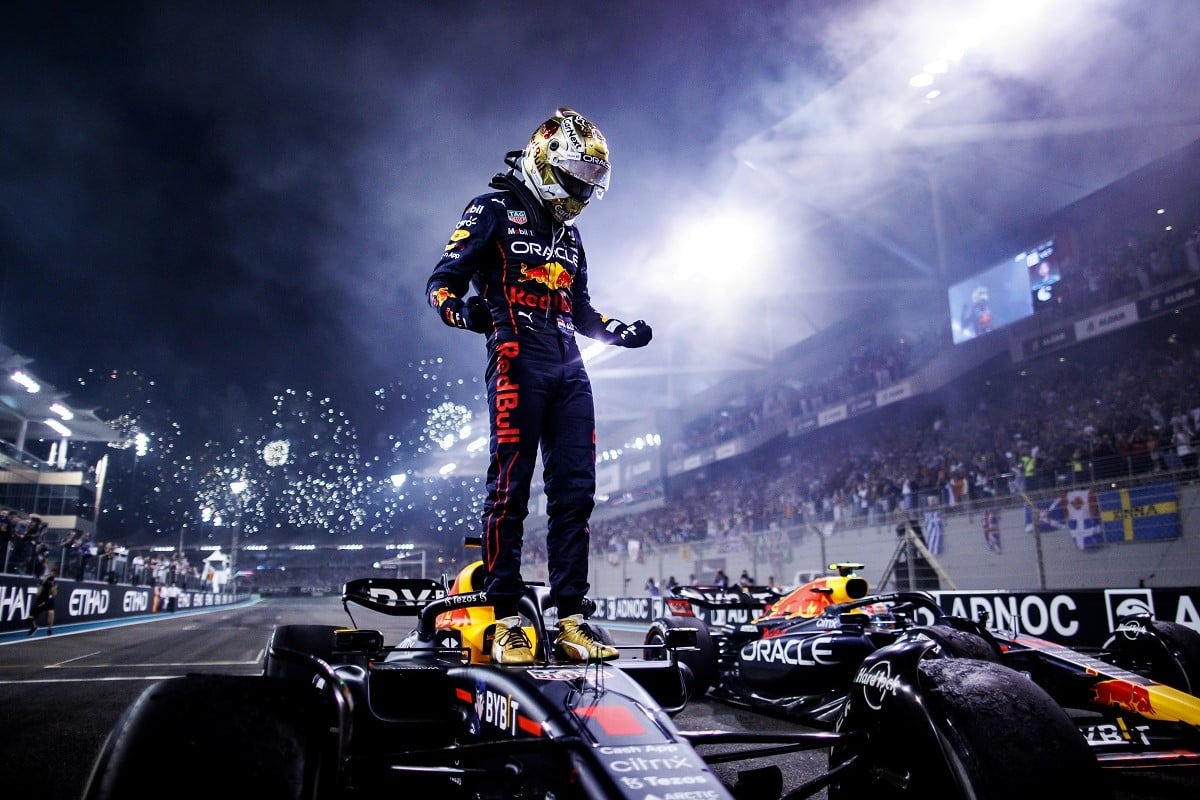 Formula 1 saved TAG Heuer. Twice. In 1986, the battery-powered Formula 1 helped the brand reach a budget-minded audience. The Formula 1 line got its inspiration from the colorful and very successful Swatch watches introduced in 1983. The first series of Formula 1 models had a steel inner case coated by a fiberglass outer layer in six different colors. TAG Heuer used different quartz movements from Ronda, ESA, and ETA. In 1987, TAG Heuer also added Formula 1 models with a stainless steel case and a bracelet. Two years later, a quartz chronograph was added to the lineup. Ayrton Senna helped immensely in selling the sporty, funky-colored watch. But over time, the Formula 1 collection became more and more serious and less fun, and it was absent from the collection between 2000 and 2004. 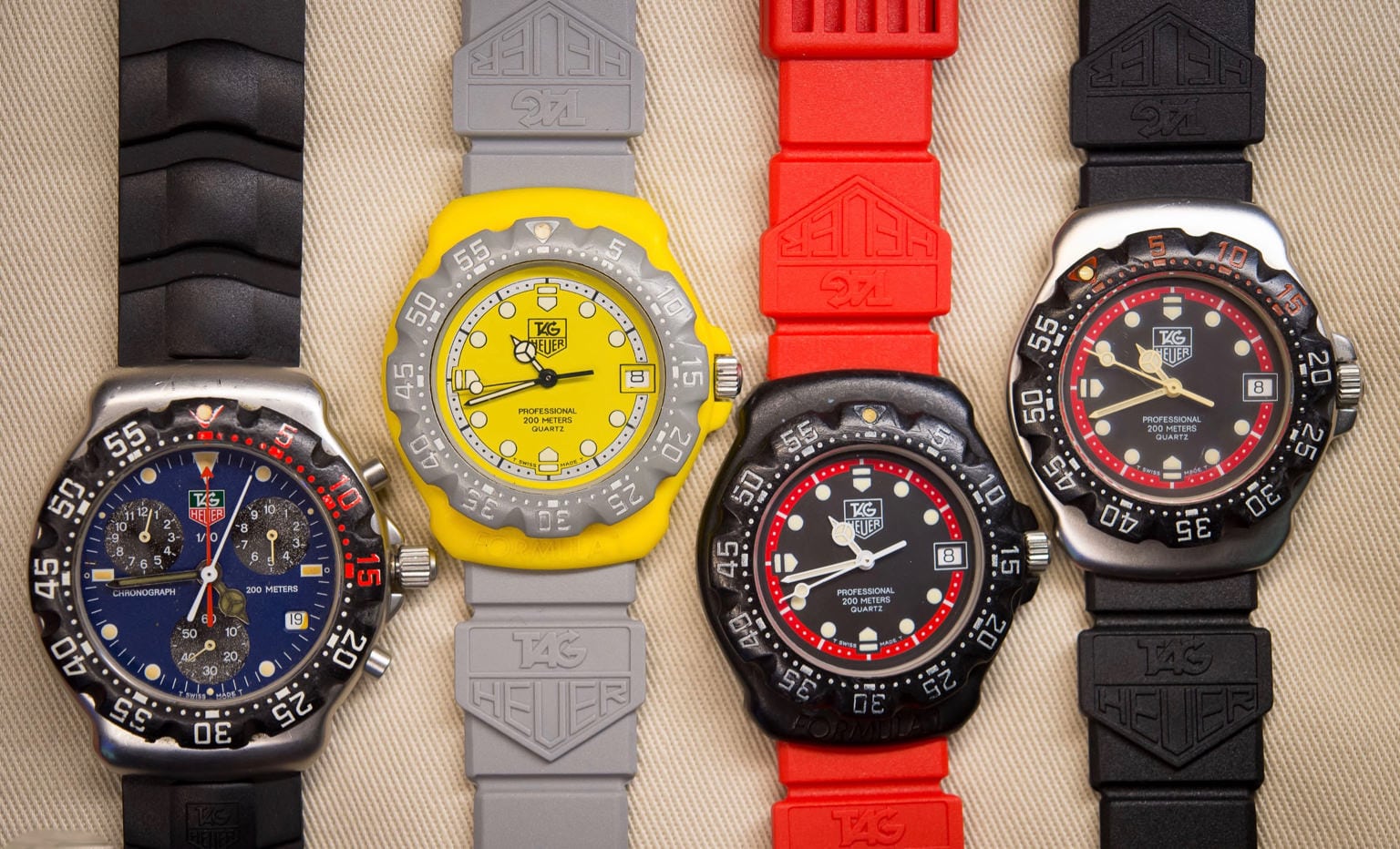 A Formula 1 with a battery or a tourbillon

It was the latest generation of Formula 1 watches that was introduced in 2015 that played the same role as the original collection — bringing in a young audience on a budget. TAG Heuer had slowly but surely gotten out of reach price-wise and needed to reconnect with a larger audience. The collection started out as quartz-only, but gradually got upgraded with mechanical models. The current Formula 1 collection consists of 40 references. It all starts with a quartz-powered 41mm three-hander with a price of €1,350 — the most affordable TAG Heuer of all — and ends with the €24,750 Formula 1 × Mario Kart Chronograph Tourbillon. The latter does bring back some fun in the collection and also perfectly captures the zeitgeist. 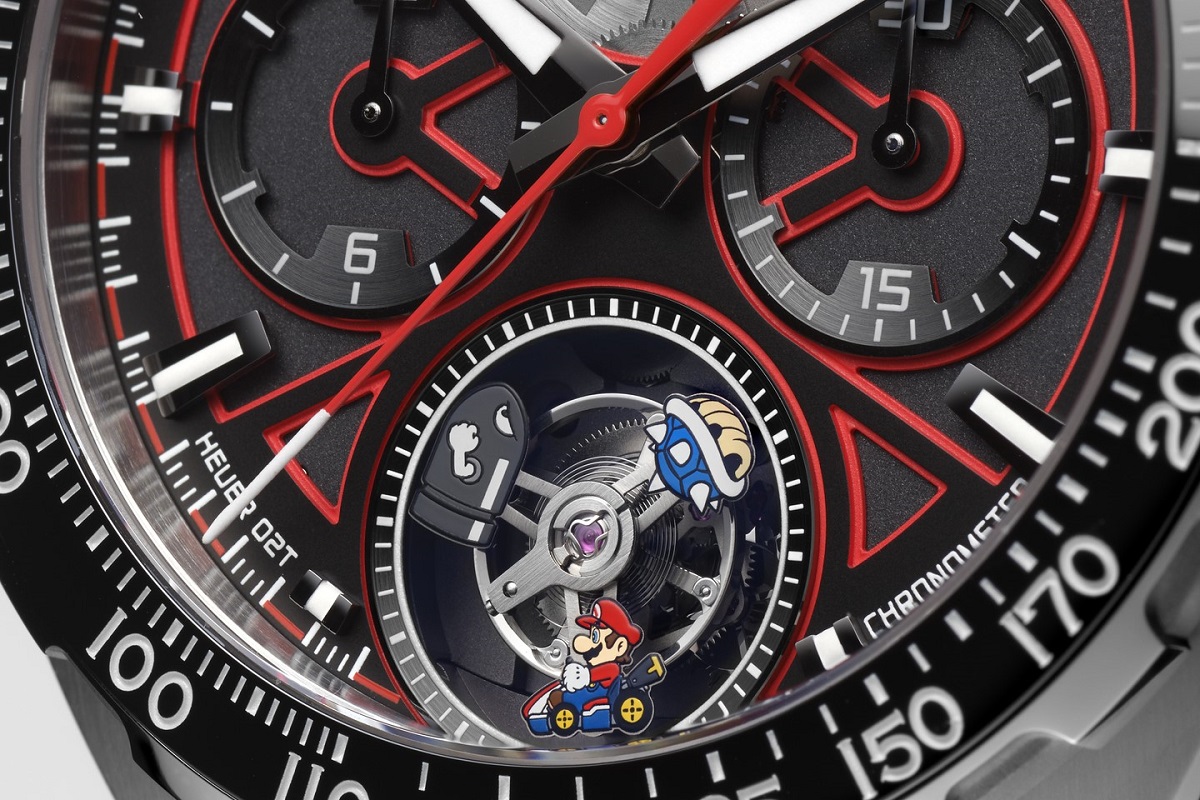 We’re living in the era of collaborations between brands, other brands, artists, and designers. While this results in striking collaborations, it is also intended to create a new revenue stream and connect with a new audience. After the pandemic, people need joy and levity, and luxury brands have recognized this by embracing cartoon figures and other elements from pop culture, like video games. 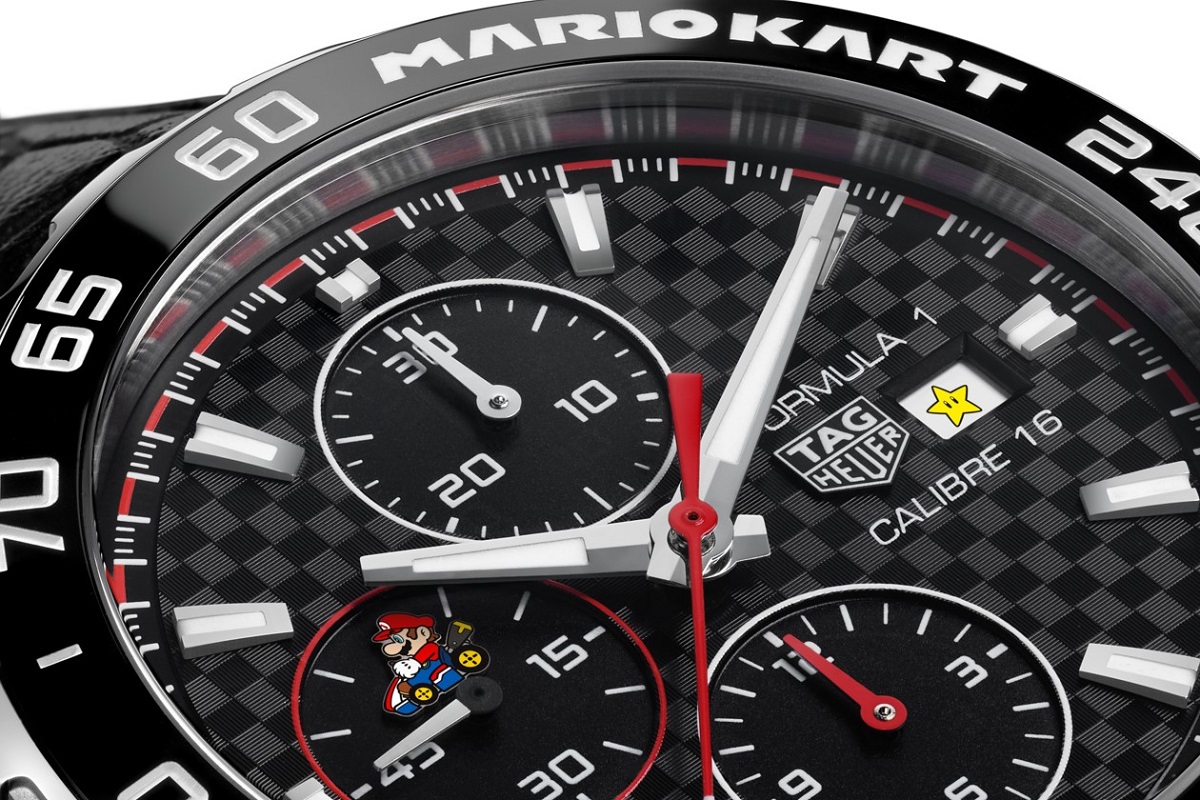 Under its young CEO Frédéric Arnault (28) — he’s the third son of co-founder, chairman, and chief executive officer of LVMH, Bernard Arnault — TAG Heuer seems to be a schizophrenic brand. On the brand’s website, there’s a category “Timepieces” and a separate one called “Smartwatches.” And also within the watch categories, opposing watches are present — think the purist 39mm Carrera 60th Anniversary Automatic Chronograph (€7,100) versus the contemporary, open-worked, 45mm Carrera Chronograph (€6,300) with its blue ceramic bezel. 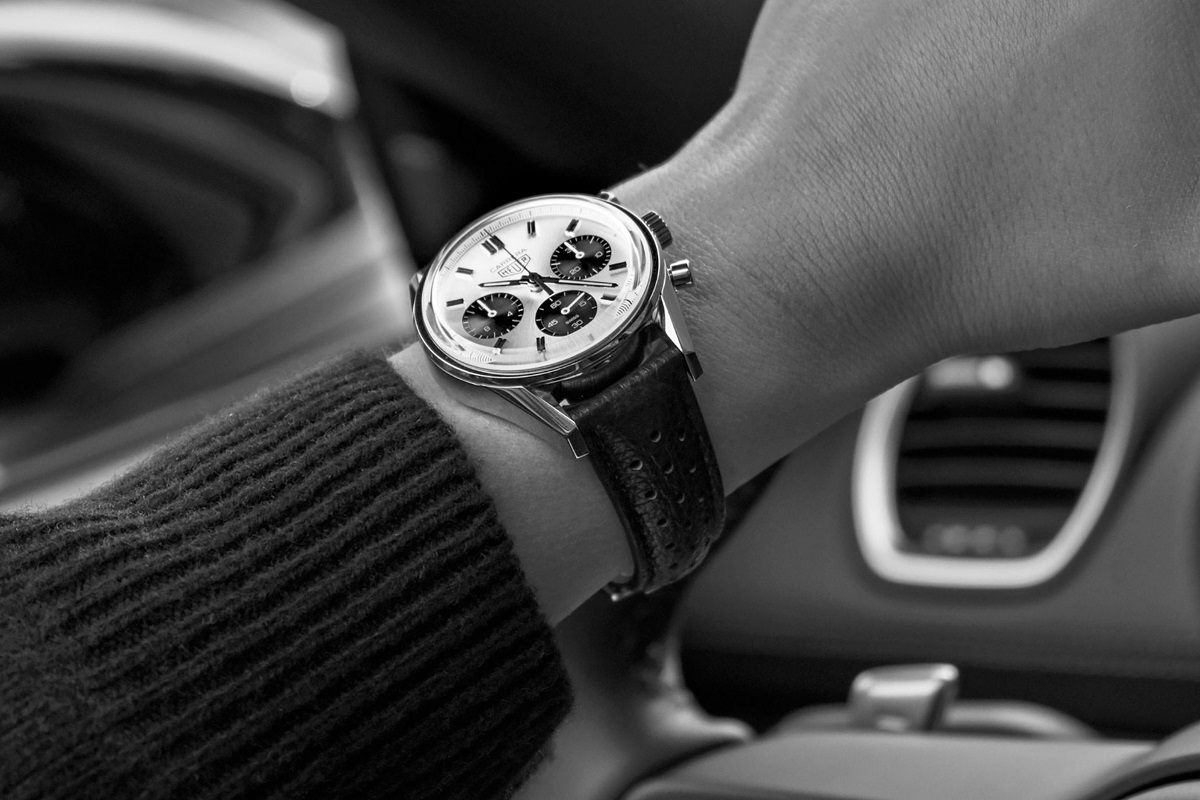 But maybe TAG Heuer is now a brand that we need to enjoy up close, from within the universes of its six different watch collections. There are heritage-inspired watches for purists and sporty quartz models for budget-conscious consumers taking their first steps into the luxury universe. Interestingly, innovation also makes its way into the different watch collections. Take the Aquaracer Professional 200 Solargraph (€2,950), for instance. The two versions of the watch come in titanium or luminous carbon. And inside these lightweight cases ticks the Calibre TH50-00, a solar-powered movement. The spirit of innovation found in the 1916 Mikrograph is also present in this modern sports watch. And it was also present in the 2022 Carrera Plasma Tourbillon Nanograph with its carbon hairspring, created through a similar process as the lab-grown diamonds that decorate the case. 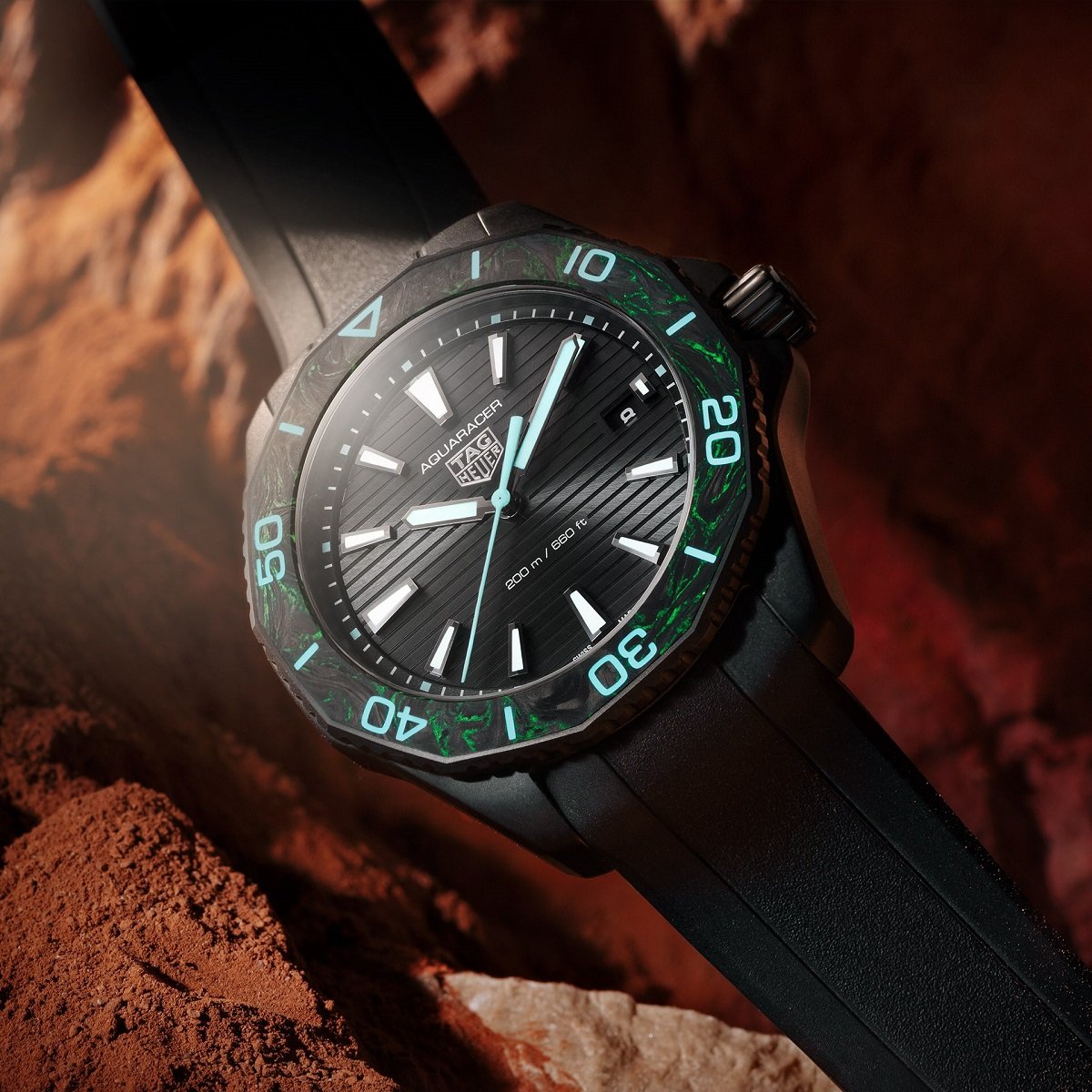 A smart connection with the times and Formula 1

The spirit of progress is also present in the four different collections of Connected smartwatches that keep evolving and growing. A slimmed-down 42mm Connected Calibre E4 (starting price €1,750) is now available for those who can’t fit the 45mm original XL case size to their wrists. The Calibre E4 may not speak to those who appreciate a 39mm Carrera with a classic dial layout, even if the Connected is smart enough to be able to mimic that style. But with its urban and sporty look, the 42mm Connected will find its way to a (much larger) different audience. 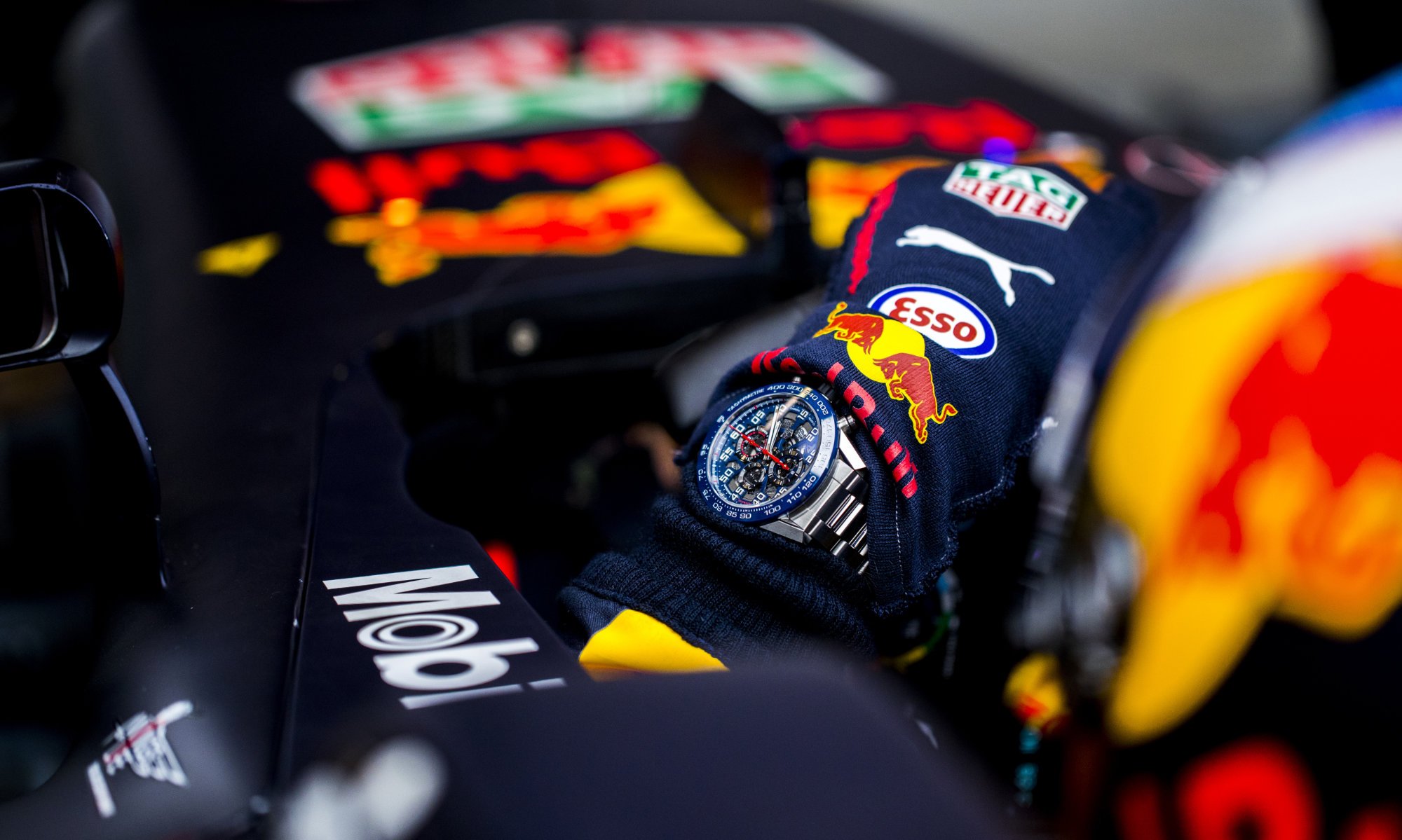 Young Frédéric Arnault is in touch with the times and the brand’s past, and it’s not just the vintage-inspired models and the different Connected smartwatches that prove that. Arnault also understands the value of TAG Heuer’s long-running connection with Formula 1: “TAG Heuer has an outstanding heritage in Formula 1, stretching back to the golden age of Grand Prix racing, and we are proud to continue that story with Red Bull Racing Honda until the end of the 2024 season. Together with the Team, our mission is to continue to strive for ultimate precision and performance through beautifully engineered concepts that contribute to the remarkable history and wonderful mystique of motorsport.”

In 20 years’ time, we will find out if Max Verstappen had the same impact on TAG Heuer as Ayrton Senna did — and on Formula 1 itself, but that’s another story.