Why The Breguet Marine Collection Is The Brand’s Unsung Hero

The start of the year is one of my favorite times for writing. Why, you ask? Well, it’s because the year is so fresh and new. There are no new trends yet for 2022; we still need to give the year a chance to find itself and decide what it wants to be. With that in mind, it’s the perfect time to appreciate what already exists with the clarity that the new year brings. Some of a brand’s more impressive work can get lost among the noise of its flagship launches. With that in mind, I wanted to take a look at Breguet’s Marine Collection. Why? Because I believe it’s the unsung hero in the Breguet family.

Breguet had a solid year last year. While it released a couple of new additions to the Marine line, 2021 was undoubtedly the year of the XXI, with the pilot’s watch hogging all the attention. This was compounded by the XXI being Breguet’s focus for its contribution to Only Watch ’21. Not to take away from the XXI as it’s a fantastic model in its own right, but it stole the spotlight from the more deserving Marine collection. For me, the Marine collection is some of the best of Breguet’s work. It combines much of Breguet’s technical prowess and traditional values while interpreting them in a more contemporary way. The result is a range of sporty watches that blur the line between classic and modern design tropes. So, without further ado, I wanted to take a quick look at three of my favorite models in the collection. 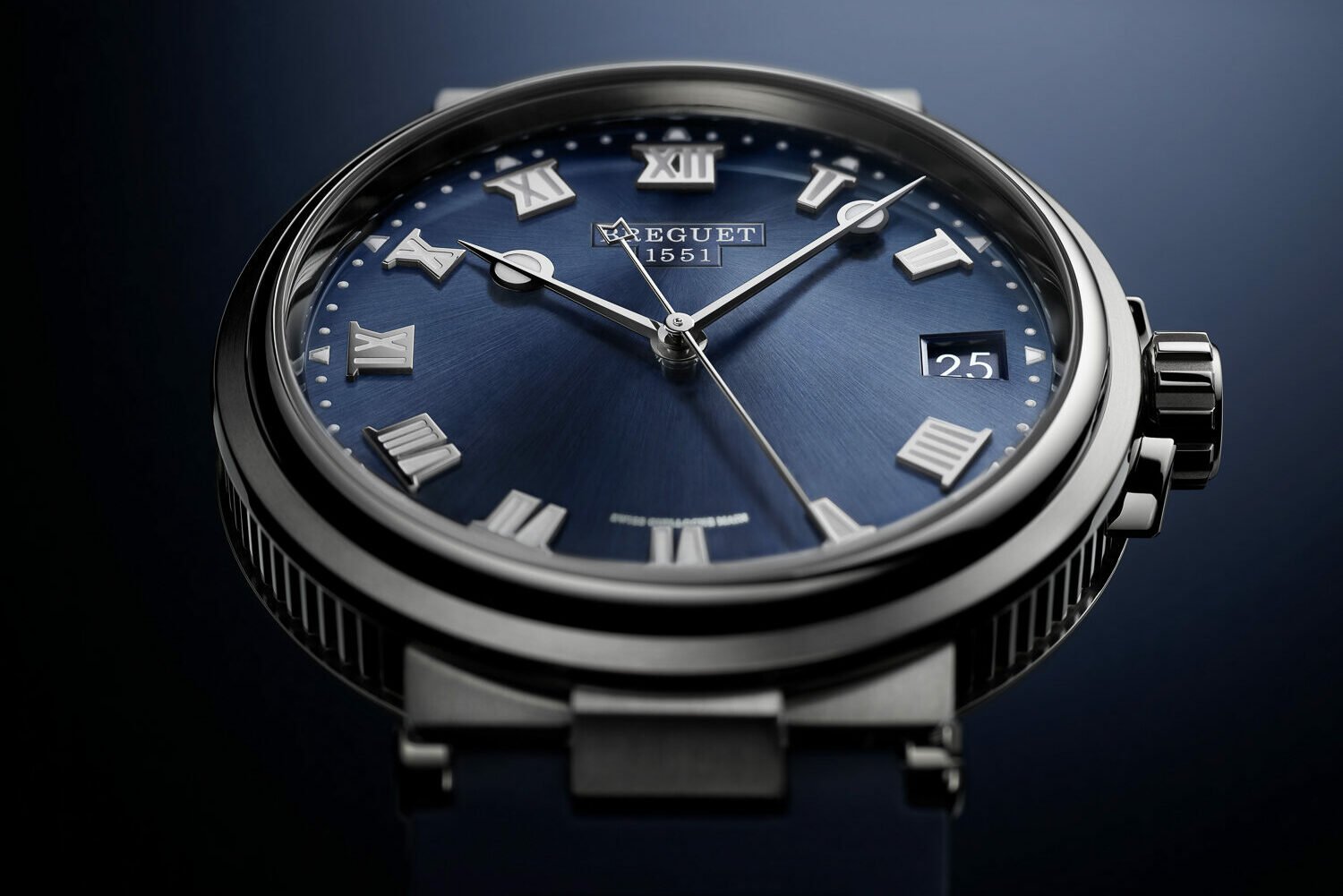 Let’s start with the classic “bread-and-butter” model in the Marine collection, the 5517. Back in 2018, Breguet released the Marine 5517 in titanium. It was the first time the brand used titanium for one of its collections, but as titanium has a strong resistance to salty air and corrosion, it was a logical choice for the Marine collection. At that time, Breguet only offered the 5517 with a slate gray dial, but the brand updated the 5517 with a gorgeous sunburst blue dial last year. In my opinion, the sunburst blue dial is a beautiful addition and a very logical color choice that is far superior to the gray.

This interpretation modernizes what can be an archaic and ugly number format.

Perhaps one of my favorite things about the Marine collection is the numerals — the Roman numerals, to be specific. Now, those who know me probably know how much I usually despise Roman numerals, but Breguet’s designed them using some curious half-serif font. This interpretation modernizes what can be an archaic and ugly number format. I particularly like it as it also shows off the Roman numerals using lume. 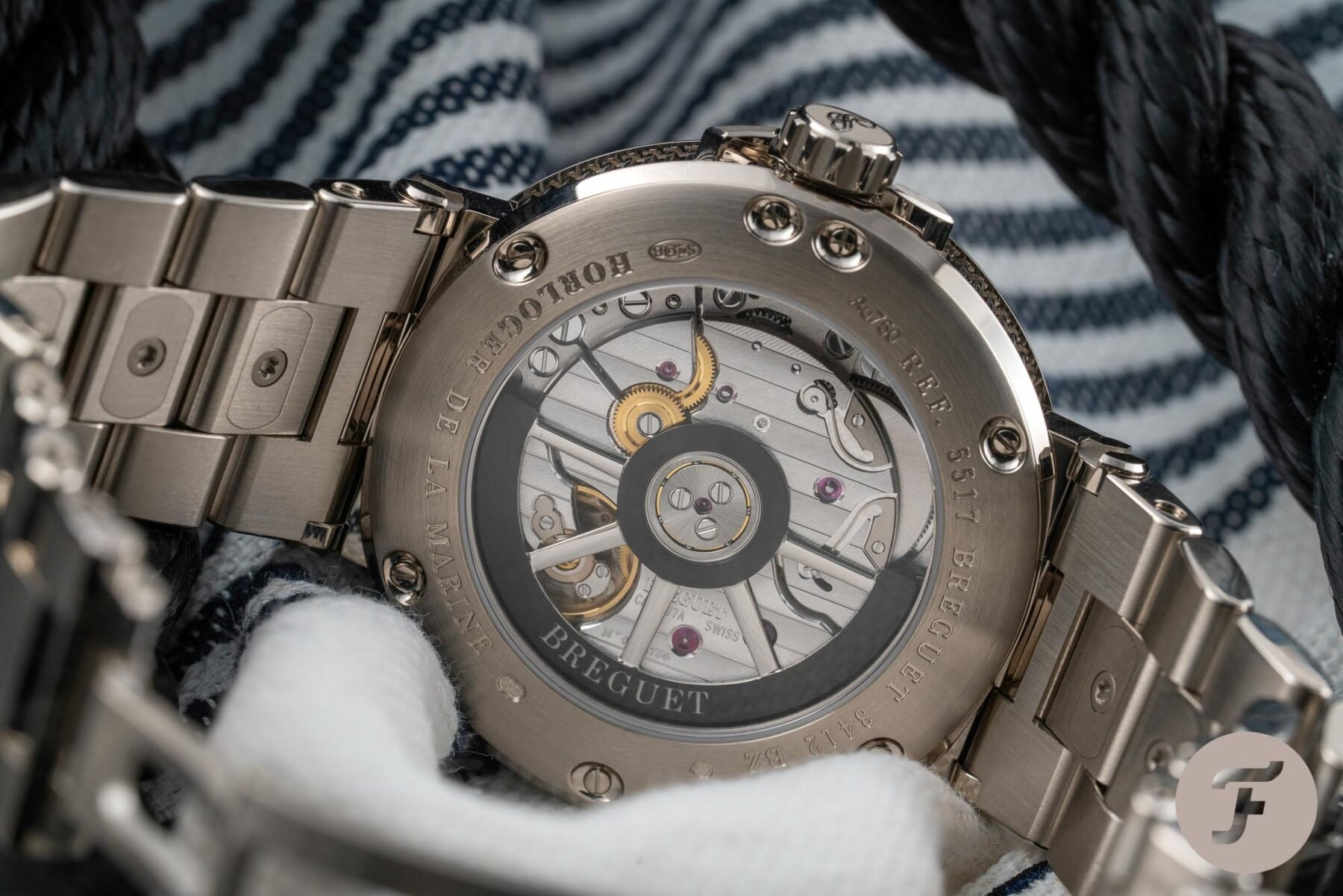 Lastly, perhaps one of the essential parts of the watch, if not the most essential, is the movement. The Breguet caliber 777A is a mechanical self-winding movement with 55 hours of power reserve. A total of 179 parts make up the 777A, which has 26 jewels and a frequency of 4Hz. The only “complication” is the date feature found at 3 o’clock on the dial. Further features of the movement are the inverted in-line lever escapement with silicon horns and a flat, silicon Breguet hairspring. It is not the most advanced caliber from the Swiss powerhouse, nor is it essential with the Marine 5517. The movement gets the job done, works well, and keeps time accurately. What more do you need? 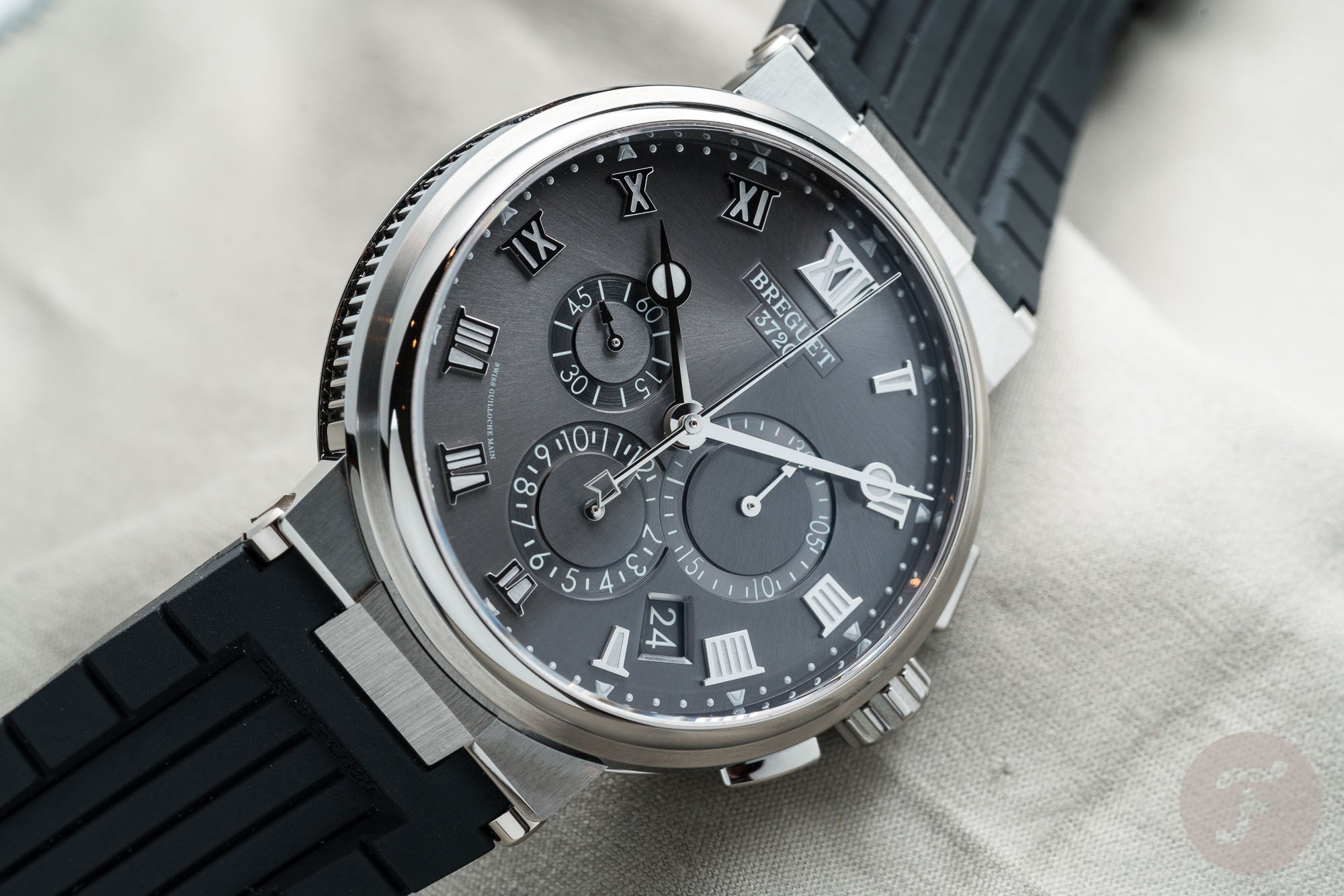 Next up is the Breguet Marine Chronographe 5527, the logical next step up from the more simple 5517. I chose the 5517 with the blue dial on the gorgeous titanium bracelet, but I prefer the chronograph with the original sunburst slate gray dial on the sportier rubber strap. I’ve always seen the chronograph as a sporty complication, so the black rubber strap feels like the logical choice for me. I also think the watch would look a little washed out on the titanium bracelet with the slate gray dial. The black rubber strap adds a much-needed element of contrast.

Essentially, the 5527 is quite similar to the 5517 in design, with the obvious addition of the chronograph and a slightly taller case to accommodate the thicker and more complicated movement. I’ve long been a fan of differently sized sub-dials on chronographs, as not all the information is equally as valuable. The minutes counter is the most critical sub-dial for a chronograph, so it is the largest. The going seconds is the least essential sub-dial, so it is the smallest. The hours sit somewhere in between in size. While showing the importance of the displayed information, this layout is also more visually appealing; in my opinion, it has more character. 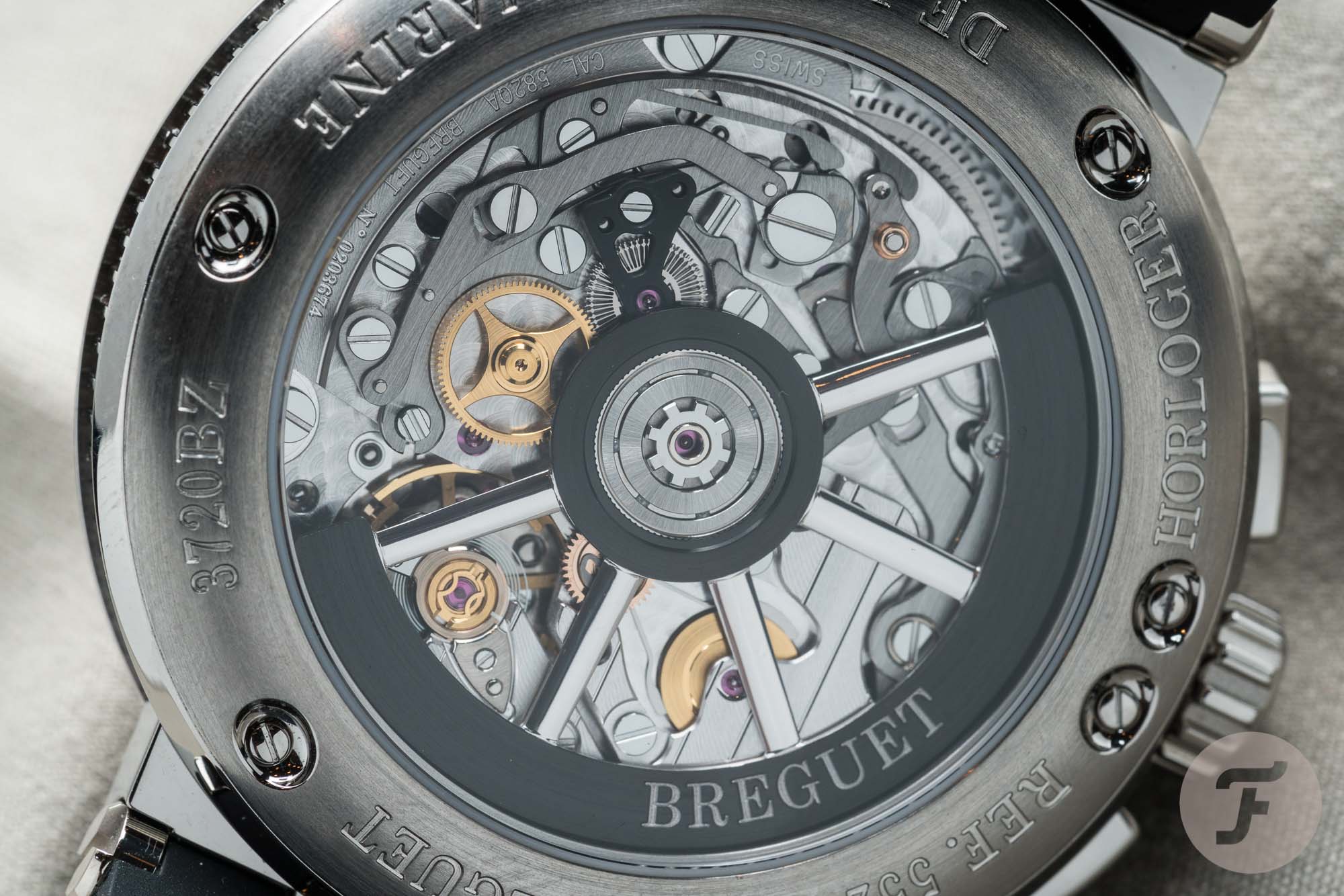 The Marine Chronographe 5227 uses the caliber 582QA. The caliber 582QA is a mechanical, self-winding chronograph movement with a 48-hour power reserve. The movement comprises 346 parts, 26 jewels and operates at a frequency of 4Hz. Aside from the chronograph function, Breguet has squeezed in a date at four-thirty. While some folks detest this date position, I think it works well here due to the asymmetrical dial layout. The 582QA also features the same inverted in-line lever escapement with silicon horns and the flat, silicon Breguet hairspring as the caliber 777A.

Last but not least, we have the jewel in the Marine collection’s crown. The most complicated Marine watch is unsurprisingly the most impressive. Breguet introduced the Marine Tourbillon Équation Marchante 5887 at Baselworld 2017. However, in 2020, Breguet introduced a new dial color to the Tourbillon Équation Marchante. Prospective buyers could choose a slate-gray  gold dial with the beautiful wave motif for the first time. In my opinion, it is the most handsome of the bunch.

The watch features a 43.9mm round rose gold case 11.75mm thick. Despite the diameter, the thickness is quite impressive given the number of complications Breguet has squeezed into its caliber 581DPE. The movement has a solid platinum peripheral rotor to wind it, and it boasts an impressive 80-hour power reserve. The caliber 581DPE comprises 563 parts, 57 jewels and operates at a frequency of 4Hz. It features a tourbillon, perpetual calendar, and Équation Marchante, also known as a running equation of time.

Although we see tourbillon watches quite regularly, the equation of time is a relatively uncommon and often misunderstood complication. In a nutshell, the equation of time complication tells the difference between “solar time” and “civil time”. These differences can add up to 16.5 minutes during a whole year and are due to both the earth’s elliptical orbit and its tilted axis. Usually, watches showing the equation of time use a separate indicator on the dial. The 5887 uses a large, circle-tipped hand (representing the sun) to display time difference. It serves as the secondary minute hand that accompanies the hour and minute hands, thus making it a “running” equation of time. Still confused? Don’t worry, you’re not alone. Either way, the Breguet Marine Tourbillon Équation Marchante 5887 is an impressive bit of kit!

Which is your favorite model from Breguet’s Marine collection? Do you own any of these marvelous watches? If so, I want to hear your thoughts in the comments below!