Breitling Strengthens Its Endurance Pro With An IRONMAN Limited Edition

I feel as though we are living in a post-MoonSwatch world. It’s tough for any new release in a polymer case with a quartz chronograph caliber to shake comparisons to the Bioceramic MoonSwatch. Such was the splash of the Omega × Swatch collab that there’s a distinct line between pre- and post-launch in the watch landscape. So much so that the Breitling Endurance Pro, which came before the MoonSwatch, has been cast in the shadow. This may have to do with the higher price point of the Endurance Pro — over ten times more than the MoonSwatch — but also the Breitling’s unique shape as opposed to the iconic lines of the Speedmaster. Not to be outdone, the Endurance Pro returns with an even bolder assortment of colors to represent the IRONMAN 70.3 World Championship design scheme. Is the blend harmonious? Let’s find out.

Firstly, the Endurance Pro is a rare success story. Released in the summer of 2020, the new collection was a surprise diversion from the esteemed brand. At the time, Breitling was gaining traction with its vintage revivals and remastered capsule collections. The long-running Professional collection was drying up with the diminishing availability of even the mainstay Aerospace model. It seemed the new direction left no space for SuperQuartz-powered Professional pieces and even less room for watches with the proprietary scratch-resistant 100% Swiss-made Breitlight composite. Yet amidst the 38mm SuperOcean Heritage ’57 and reinvention of the Chronomat, the Endurance Pro was a curveball. Initially dismissed as a cheaper (at €3,200) alternative to an Avenger, the Endurance Pro found favor with a swathe of collectors. 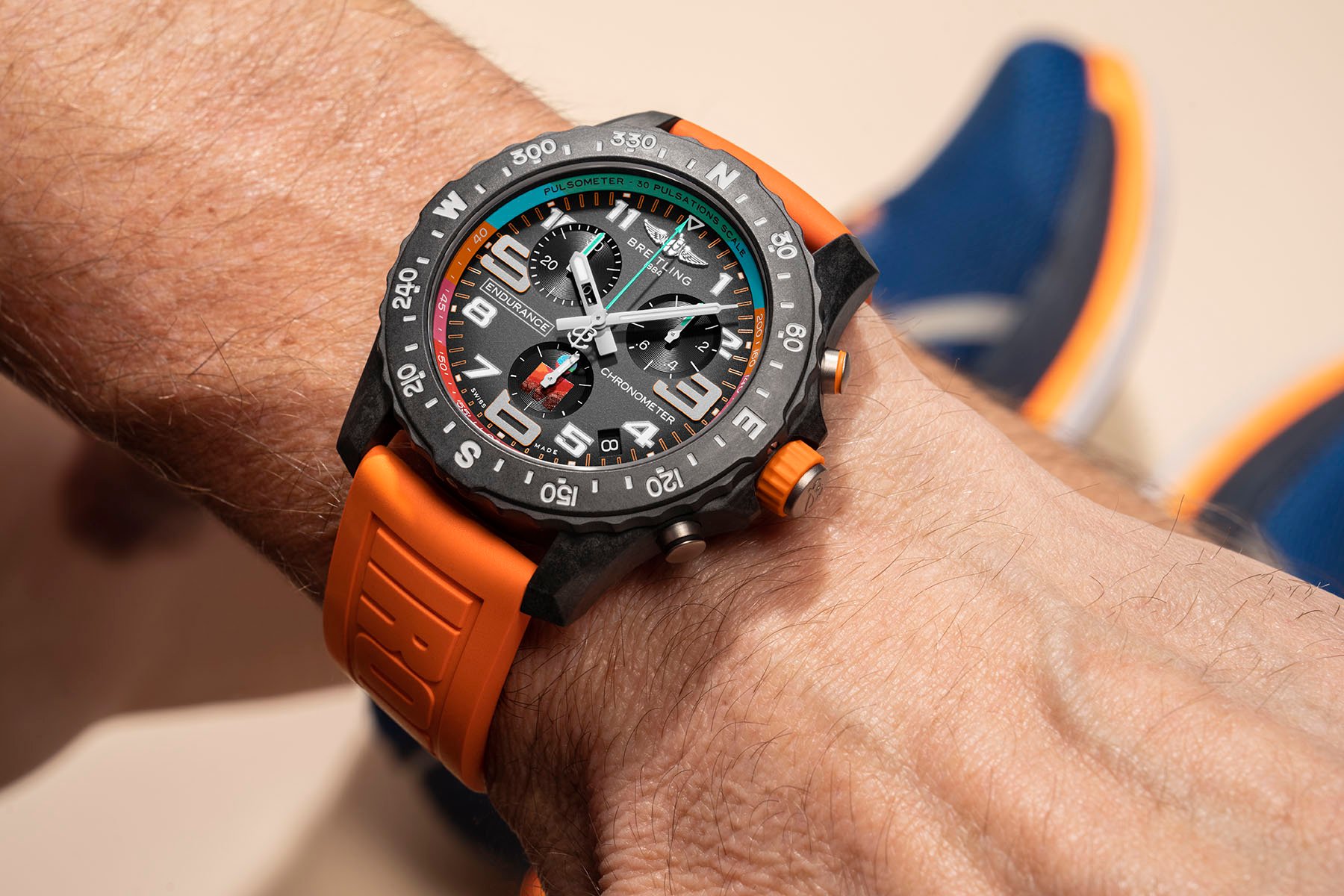 I’ve spoken to several Breitling boutiques and AD sales reps, and each has proclaimed its popularity. At first, the Endurance Pro was a vacation-ready piece for when one’s mechanical, high-end Breitling model was too precious for excursions. This may still be the case for some, but the Endurance Pro endures beyond that relationship, where it’s seen as a solid, serviceable watch all year round. That may depend on your taste, but many buy the watch as their one-and-only Breitling. What makes it compelling is not only the lower price point relative to the regular Breitling collection but also the durability offered by the 100m water-resistant ultra-lightweight 44mm Breitlight case. And despite the perception of quartz as lacking prestige, the SuperQuartz Breitling caliber 82 adds thermo-compensated accuracy and shock resistance to the range.

Shock is often a caliber-killer thanks in no small part to added strain on miniature components. In a mechanical movement, it can be particularly detrimental to the balance assembly. A quartz movement is naturally more robust than most mechanical calibers with fewer parts and no spring-powered balance to worry about. That’s not to say that Breitling’s mechanical calibers could not take the stress of cycling, running, or swimming, but the Breitling 82 offers a better chance of survival. Hence, the Endurance Pro has become a choice for those wanting a sporty watch with some Swiss artistry. The ultimate test of the Endurance Pro’s robustness is the IRONMAN World Championship triathlon due to take place on the 28th and 29th of October.

The launch collection used single-hue motifs with a core color base. Since then, special editions have experimented with ombré dials and more unique blends such as forest green and ice blue. For the latest model, Breitling mixes the 44mm dark gray marbly Breitlight case with a vibrant orange rubber Diver Pro strap. Breitling’s brand name is typically strewn across each side, but in this 200-piece limited edition, “IRONMAN” replaces the strap text. The orange accents continue to the rubber crown grip and the chronograph start/stop pusher. There is a subtle gradient for the dial as the dark shade of gray grows lighter. But what stands out the most is the pulsometer rehaut with six distinct shades. The multi-colored scale reminds me of the equally outlandish Breitling Exospace B55 Yachting from a few years ago. 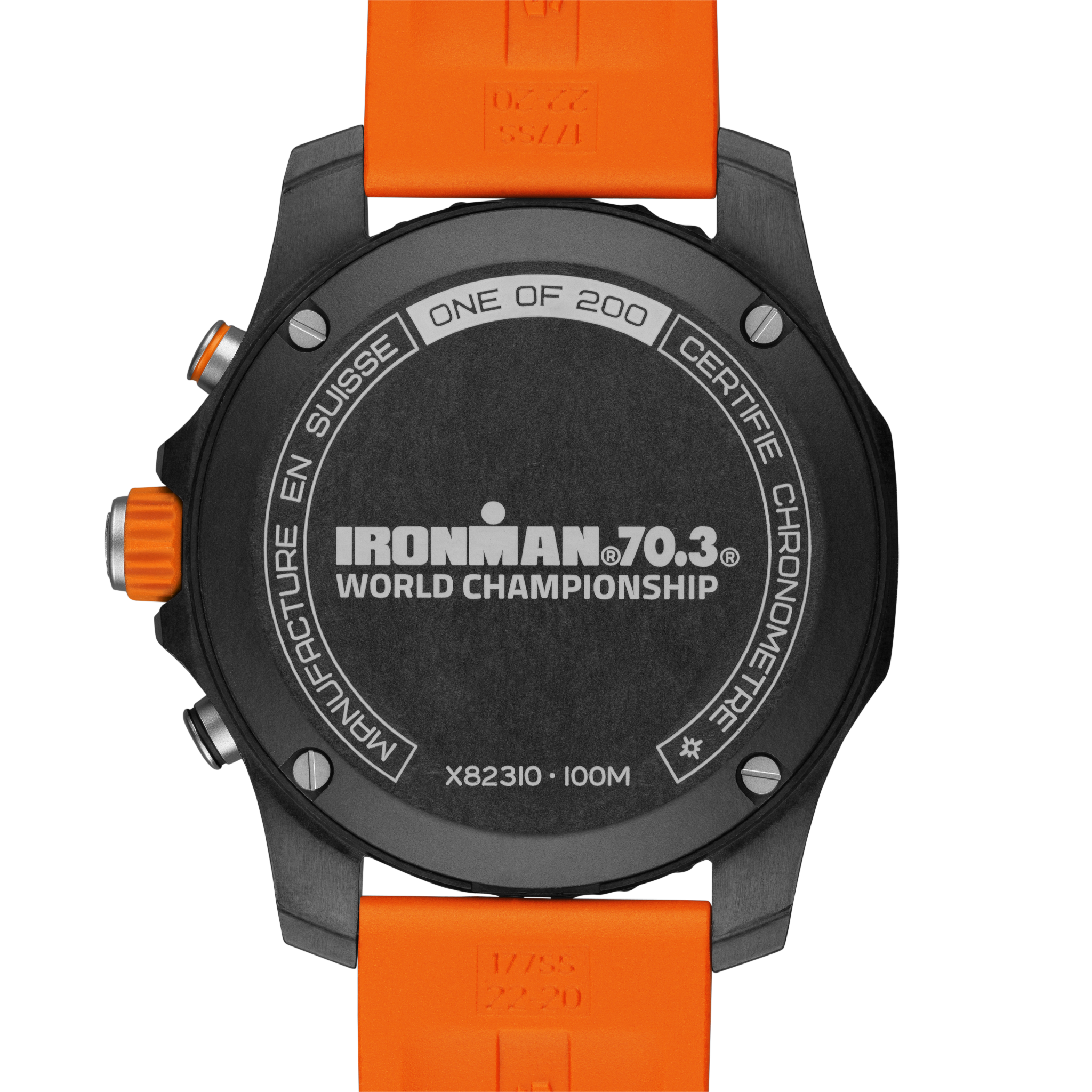 In the sub-dial that chomps through the applied “6” is the IRONMAN logo. You can witness the influence of the color choices extending to the mint-green chronograph hand tips from the logo style. It’s only the monochromatic compass bezel that offsets the dial’s exuberance. Yet, I have to admit, despite my reservations about previous “fruit salad” dials, I enjoy the myriad of motifs. The classic wings emblem, oversize numerals, and “Chronometer” designation ground the Endurance Pro in the signature Breitling cues. The only element that breaks up the symmetry is the four-thirty date window. On the solid case back is the IRONMAN 70.3 World Championship logo with the depth rating and COSC certification. 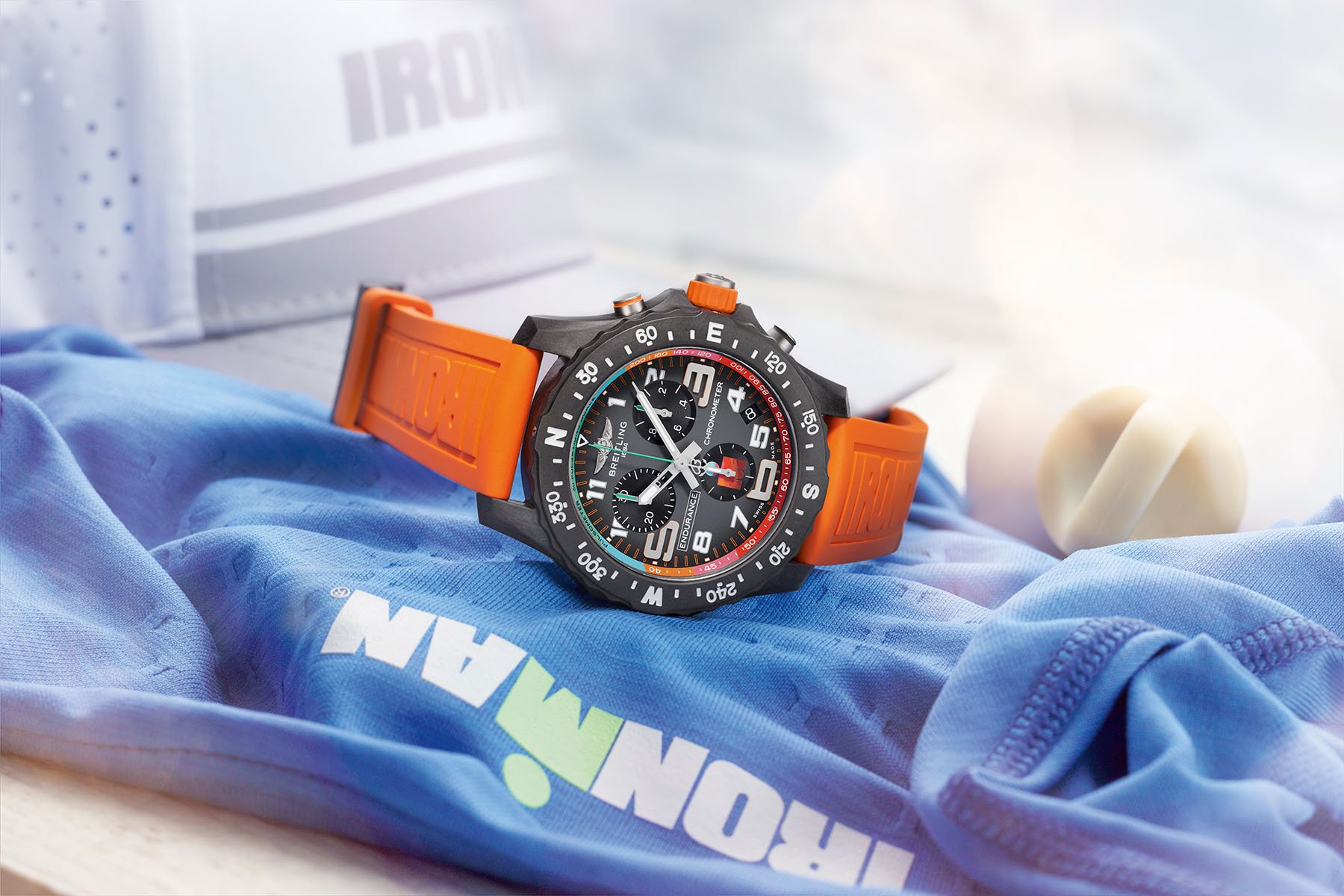 “When Jan Frodeno first became a member of our Triathlon Squad, he asked me what Breitling he should wear. We started brainstorming about the perfect sporty lifestyle watch, and that conversation led to the development of the Endurance Pro. With this watch, we adapted our SuperQuartz™ technology to the needs of people like Jan, who play as hard as they work. And the Breitlight® case is so light that it won’t interfere with anyone’s training routine or sporting activity.”