One of our first appointments during Baselworld 2018 was with Jean-Christophe Babin, CEO of Bulgari. Besides an appointment to learn about the new models for 2018 (which we will publish within short as well), we had this interview to learn about Bulgari more in general and Mr. Babin specifically.

Before we took off, we were happy to learn that Mr. Babin was well aware of our magazine, and complimented us on our achievements. Always a good start. Of course, we did some homework, and after a bit of waiting, we were allowed to shoot our questions. Here we go! 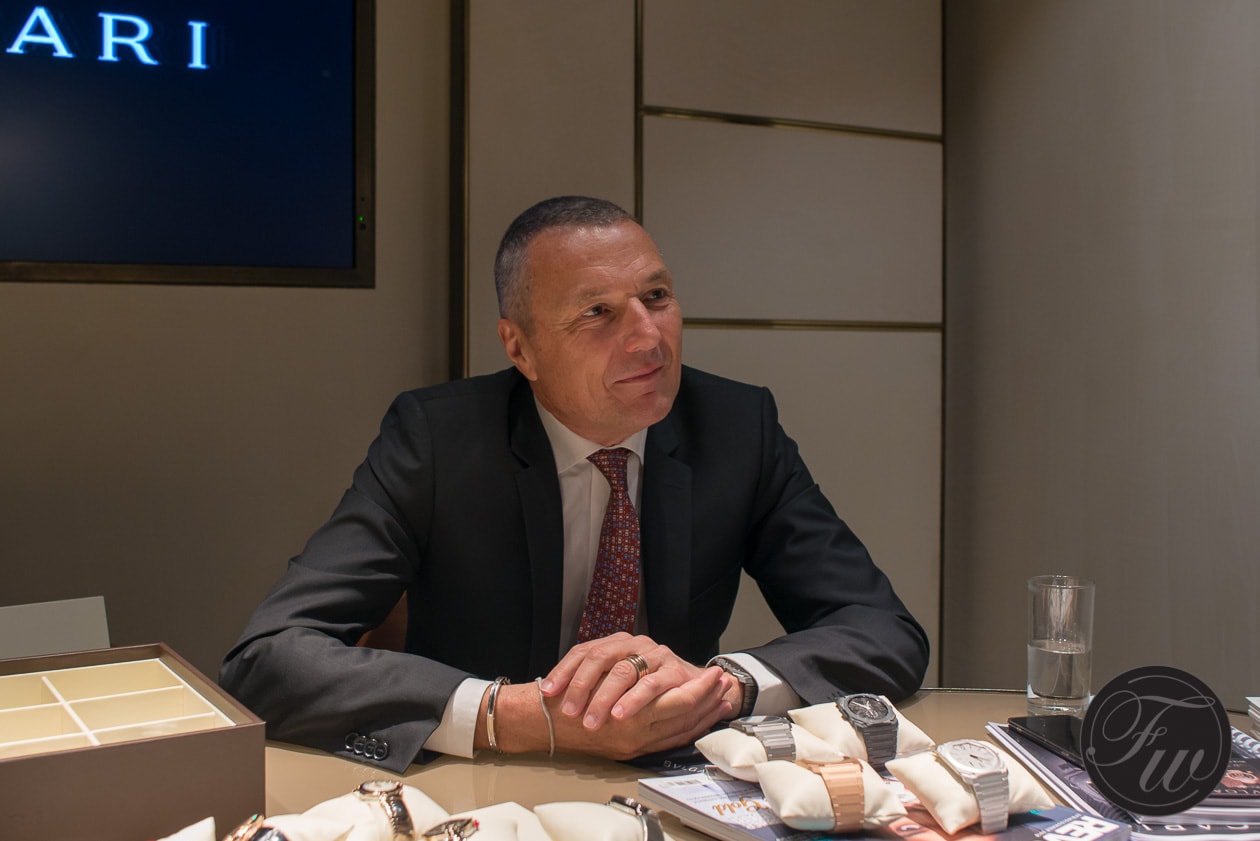 Gerard Nijenbrinks: When you started in 2013 with Bulgari, what were the first things you thought needed to change?

Jean-Christophe Babin: I arrived at a very interesting point concerning watches. The Octo and Sepenti were already announced, and my first reaction was to redevelop the collection on the long term but immediately adding steel and gold to the Serpenti collection. I knew that was a very popular combination for ladies, certainly in Asia.

Then, looking at the range, we were missing a Round watch. The project was started the moment I joined, and we were able to launch the Lvcea collection the year after, during Baselworld 2014. This has proven to be something extremely complimentary and successful.

We will further develop our current three pillars (Octo, Lvcea, and Serpenti red.) over time. They’re very different to our Swiss competitors, and I don’t feel at this stage any need for any new design. 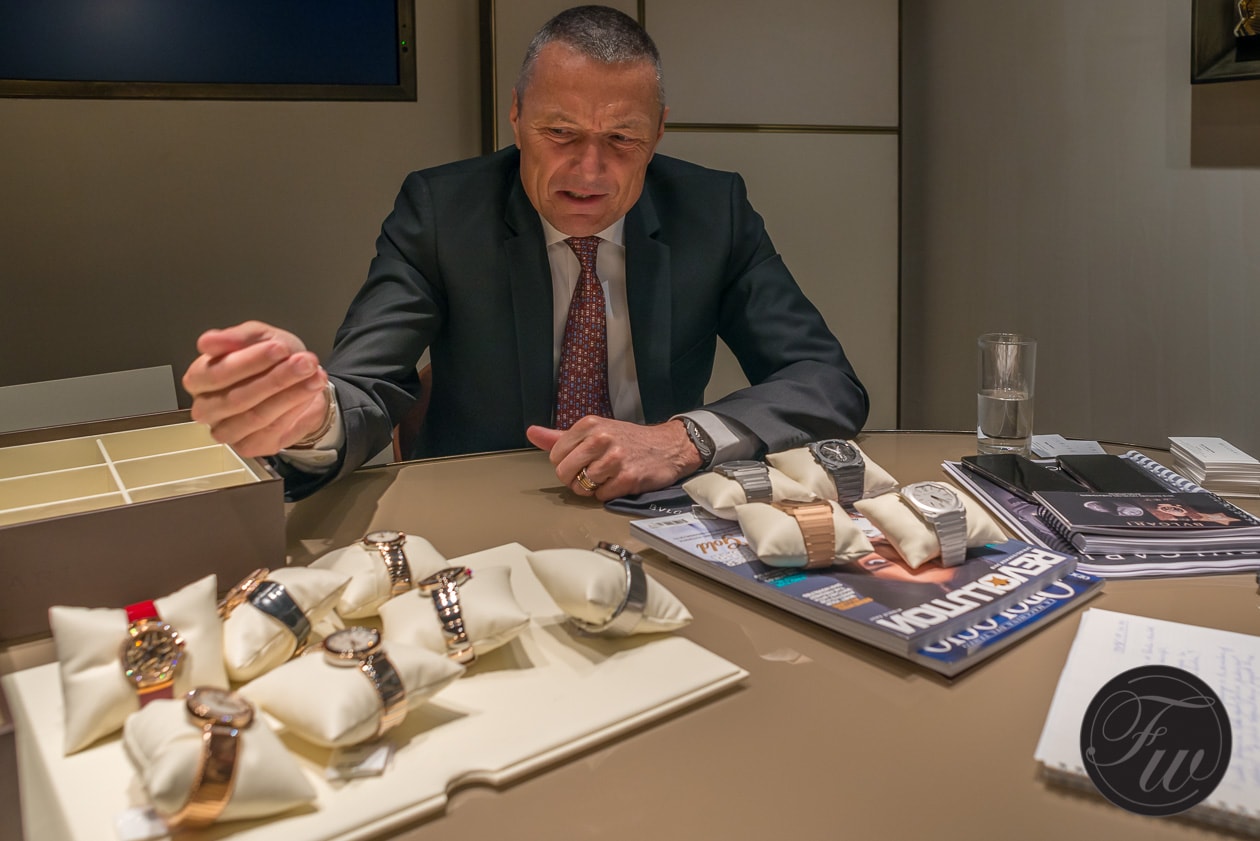 Mr. Jean-Christophe Babin explaining his interventions to the Bulgari models

JCB: Last year we had two new launches, Dubai and Beijing, and we’ll open Shanghai later this year. Further, we announced two weeks ago Paris, George V, in 2020, together with Moscow. In June we will announce our 9th hotel which I can not disclose yet.

I believe very much in the tribal concept. Meaning by tribal this pleasure to feel even better, in special locations or where ever you fly or travel to than you feel at home. It’s a feeling of something very extraordinary but at the same time very familiar to you. It’s the Bulgari style, even if each hotel is unique country related, it’s Bulgari everywhere. The thread is Roman hospitality, sophisticated. Always five-star, always the most expensive hotel in the location. But we provide a warm, cheerful, approachable hospitality which you hardly ever find in a five-star hotel. These are normally quite formal, as we pretend to be cheerful, Roman, and welcoming. And our clients do love that.

And those clients, as you can imagine – spending one-thousand, five-thousand, to ten-thousand a night – are very prone to buy jewelry. So in terms of client-linked development obviously these hotels are an excellent platform to develop further clients in the jewelry business. 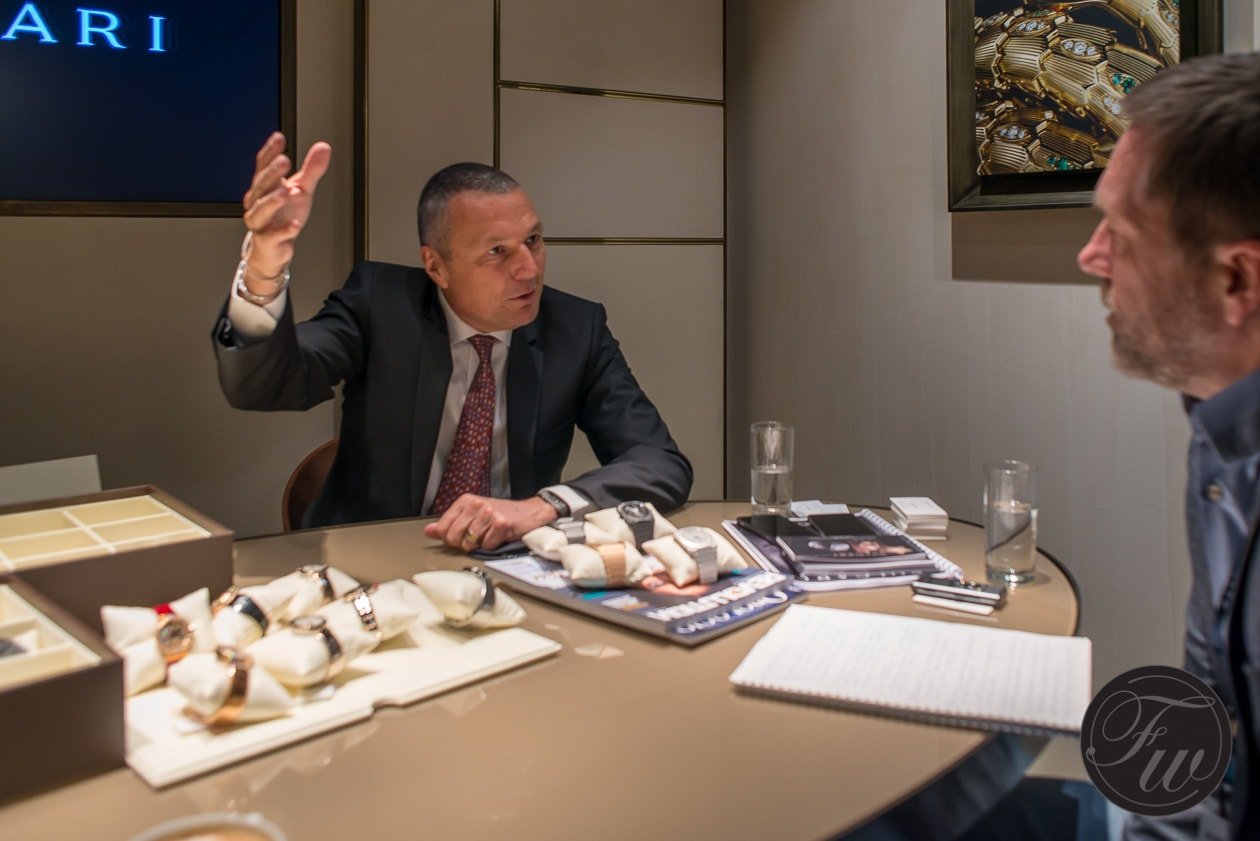 GRN: In 2014 you produced an, I think internal, publication on 2700 years Italian history. Could this be something you would repeat for public use?

JCB: Well, this was more internal just to make sure that we’re all conscious of our heritage. It has an effect on everything we’re doing. Graphically, artistically, or even our way to approach business – it’s obviously conditioned by this dolce vita, Roman, lifestyle. The main mission was really to make everyone more conscious what makes us similar despite our character differences or talent differences so that eventually we could speak the same language.

Then this alignment had to be spread beyond Italy to all our entities. It’s one thing when you’re Roman to feel Roman, then you directly understand what surrounds you. But it’s something different when you’re living in Hong Kong or in Peru to have the same feelings. It’s part of the experience we pretend to convert to our clients, it’s important we first feel it ourselves personally, humanly. 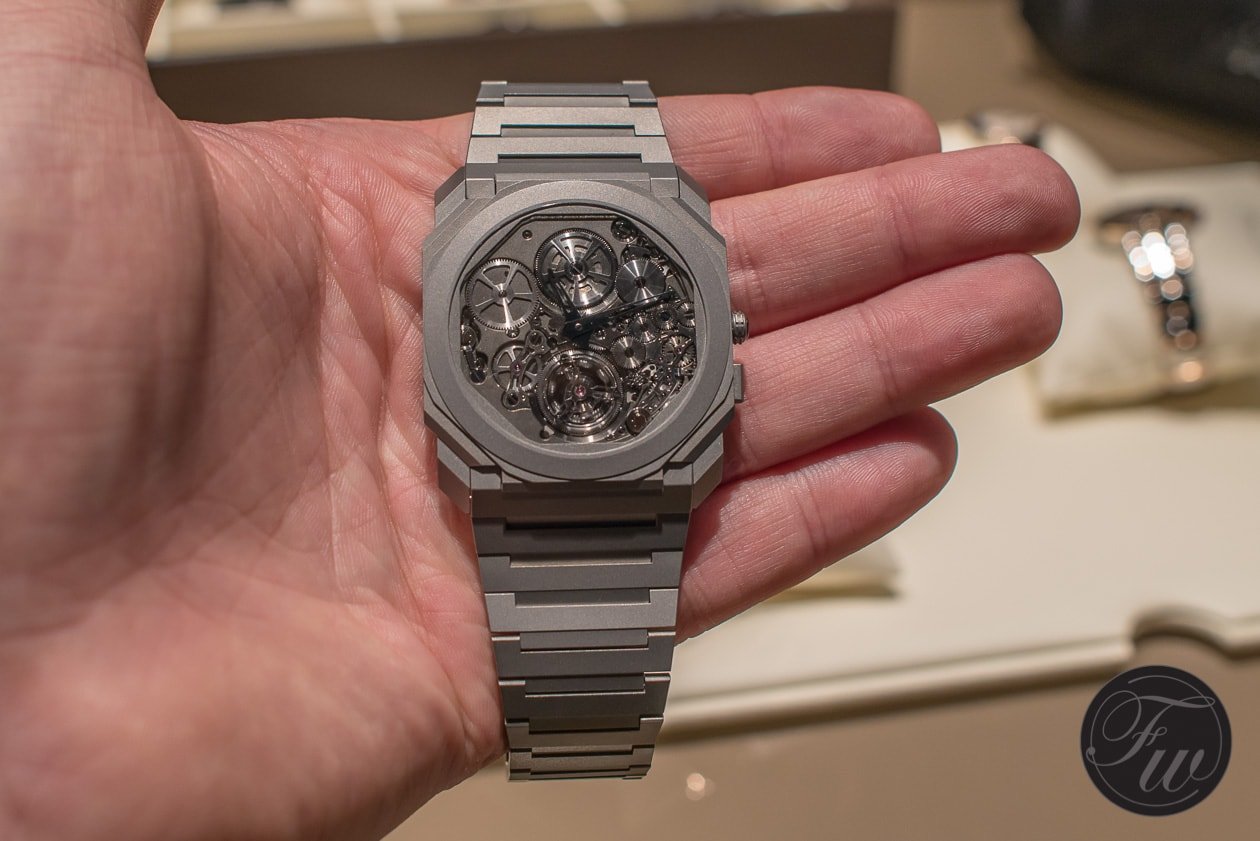 GRN: We just published an article on the new Octo Finissimo Tourbillon Automatic. How did this model come to life?

JCB: Finissimo was born out of a vision of creating the quintessence of masculine elegance in watches. We wanted really to provide Octo with a clear mission, which was not covered by an existing watch. That mission was the quintessence of contemporary elegance, which is to a man what Bulgari jewelry is to a woman. We arrived not only at the Octo shape – which is very Roman, you’ll find it in most ceilings of the ancient times – but we came also with the ultra slim look. It came directly from the Italian pret-a-porter which characterizes very much the Italian gentleman elegance. 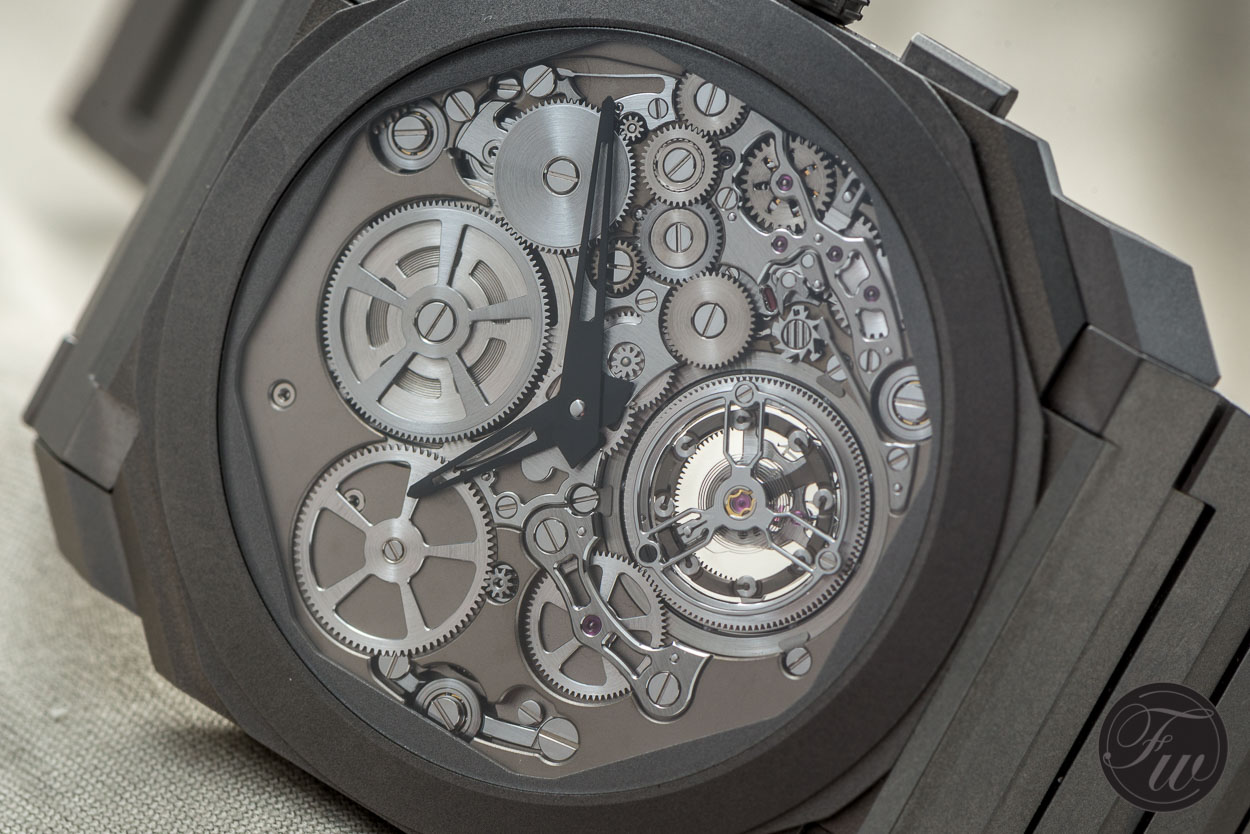 The last step is been obviously to unify the materials. Which came first with the minute repeater two years back, where we used the same titanium for the dial, the case, and the case back. This was functional for the minute repeater, it helped to release the acoustic. At the same time, this turned it to more or less an iconic signature design. Today all our developments respect those principals, octo shape, ultra-thin, integration of materials. We provide one look at all the models.

The former Octo Tourbillon was made in platinum with a black dial. Now we developed this watch according to our current Finissimo vision. 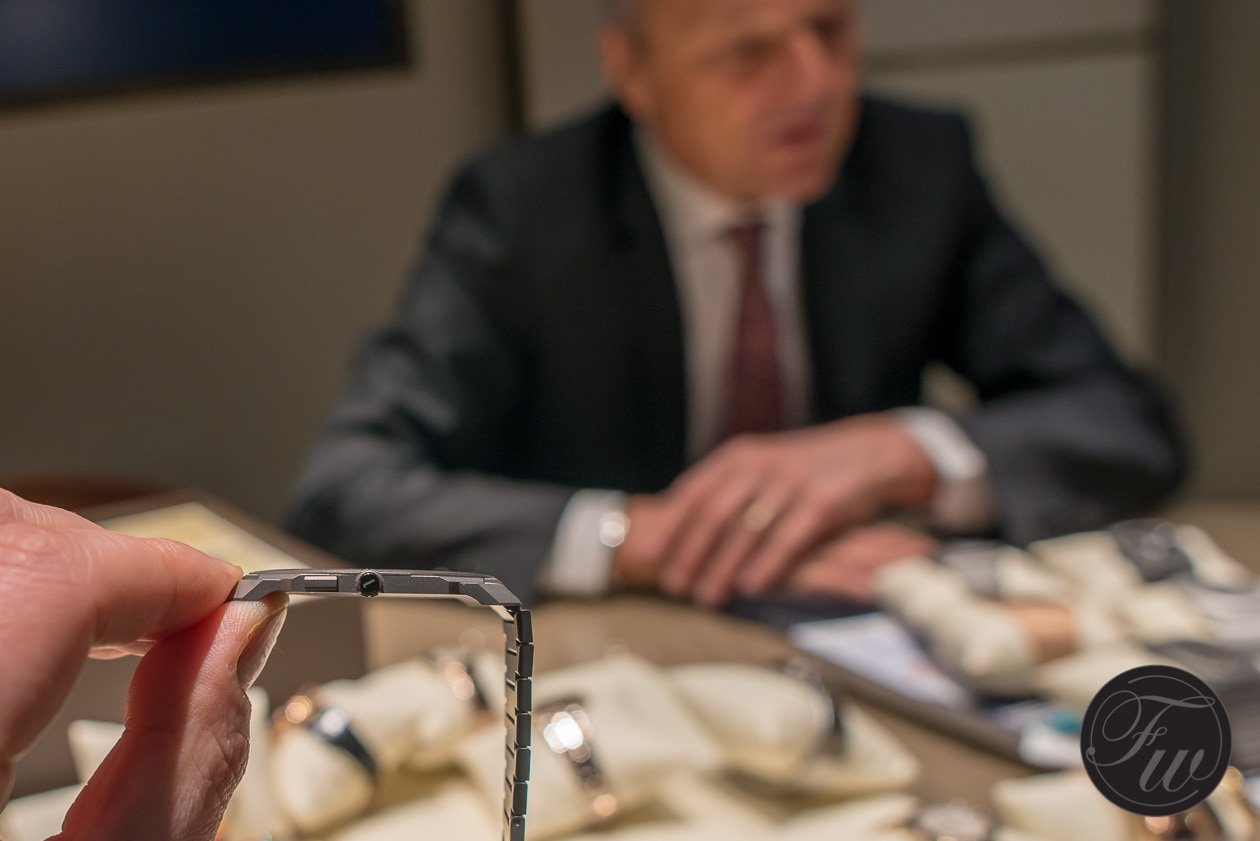 A model from the extremely thin Octo Finissimo line

GRN: Last year the Octo Finissimo Auto Titanium was one of the stars of the show. What did this model bring for Bulgari?

JCB: Besides being the star of the show, what we brought with the Automatic was really a daily watch. Before it was a tourbillon, which obviously is not exactly daily. For the price on one and, and also because a lot of people see tourbillons as exceptional watches. Even if the Octo-look is suitable as a daily watch.

Bringing the Automatic we brought something which was much more daily. Much more convenient, people do like self-winding, which wasn’t existent with the tourbillon. And also the subsequent price of thirteen thousand made it overnight a watch with a clientele potential much much broader. So it really has expanded the Octo appeal to a much broader clientele. 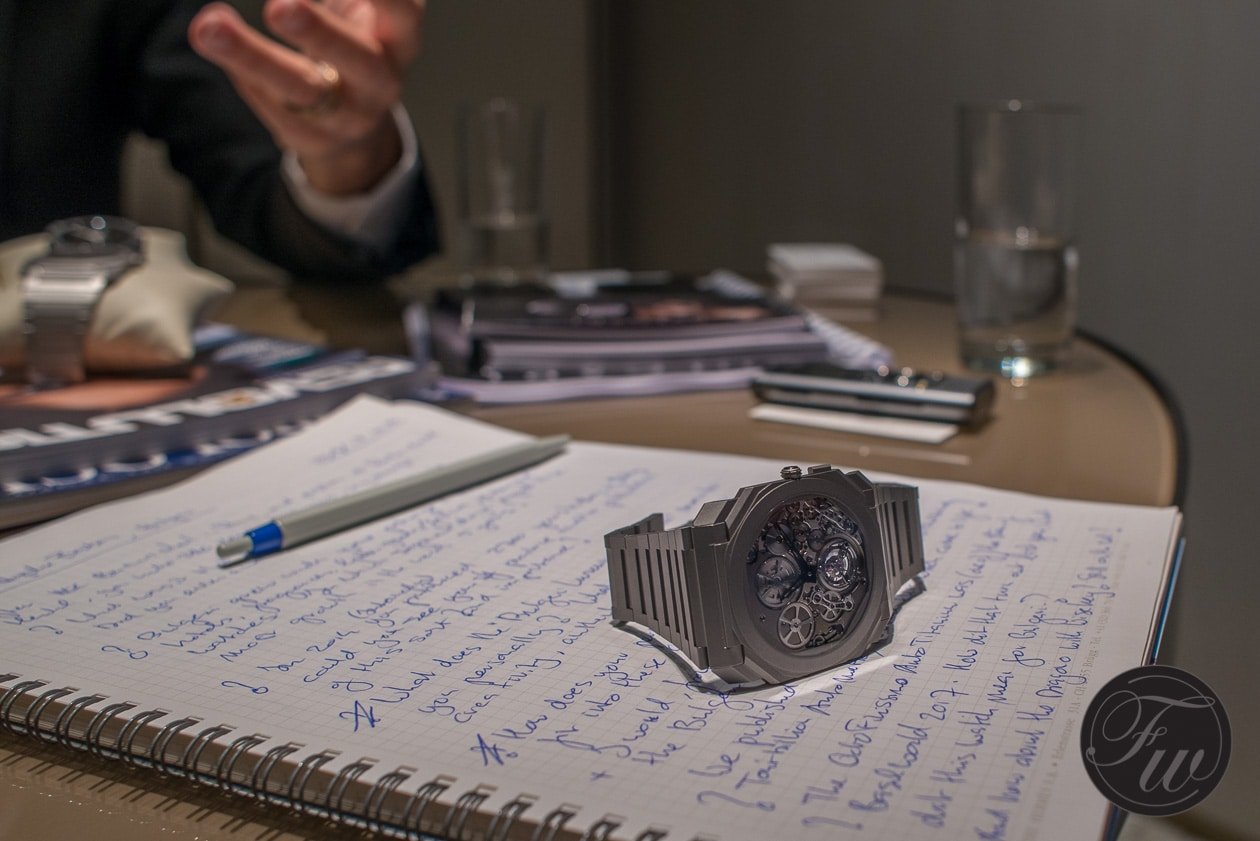 GRN: A few years ago we learned about a Diagono model in cooperation with Wisekey, which should have NFC payment functionality. What happened to that project?

JCB: Wisekey you know is one of the leading companies in cybersecurity. We have two things. We developed the Bulgari Vault app. An app for storing, protecting, and encrypting, any confidential data you have. It’s an app for clients, which you can buy with the highest level of security encryption, warrantied by Wisekey.

And besides that, we have developed the concept watch Diagono Magnesium, which allows you not only to store on a Vault app protected information but also provides electronic payment. It has NFC, but not compromising with the integrity of a mechanical watch, there’s no battery inside.

This watch project is still running, not commercial yet because we’re waiting for further consolidation of bank protocols behind the e-payment. Today it’s still very fragmented bank by bank. We at Bulgari think we have to wait because a client wouldn’t understand if he goes into a restaurant to pay with his watch and it’s not functioning. He might blame Bulgari. And it’s too difficult to explain that he has the right watch but the wrong bank.

The watch project as such is doing very well, all technical challenges have been met. The antenna is in the bezel and is perfectly communicating. I think we have to wait another 18 months before the bank protocols will be more harmonized.

[At this point Mr. Babin’s personal assistant made clear that our time has run out, and we had to stop. Mr. Babin asked for one last question though. Here it is.]

GRN: If you have to advise one single Bulgari watch for the rest of my life, which watch would that be?

JCB: For you? As a man.. It depends on your budget, I would say ideally this one [Octo Minute Repeater in gold]. This is really very essential, very gold, a very daily watch but at the same time, it’s a minute repeater. You keep a very very treasurable secret on your wrist. Which you only know because, like any minute repeater, it doesn’t show. It’s very versatile, jeans or a business attire, I mean this watch is really fitting anything. 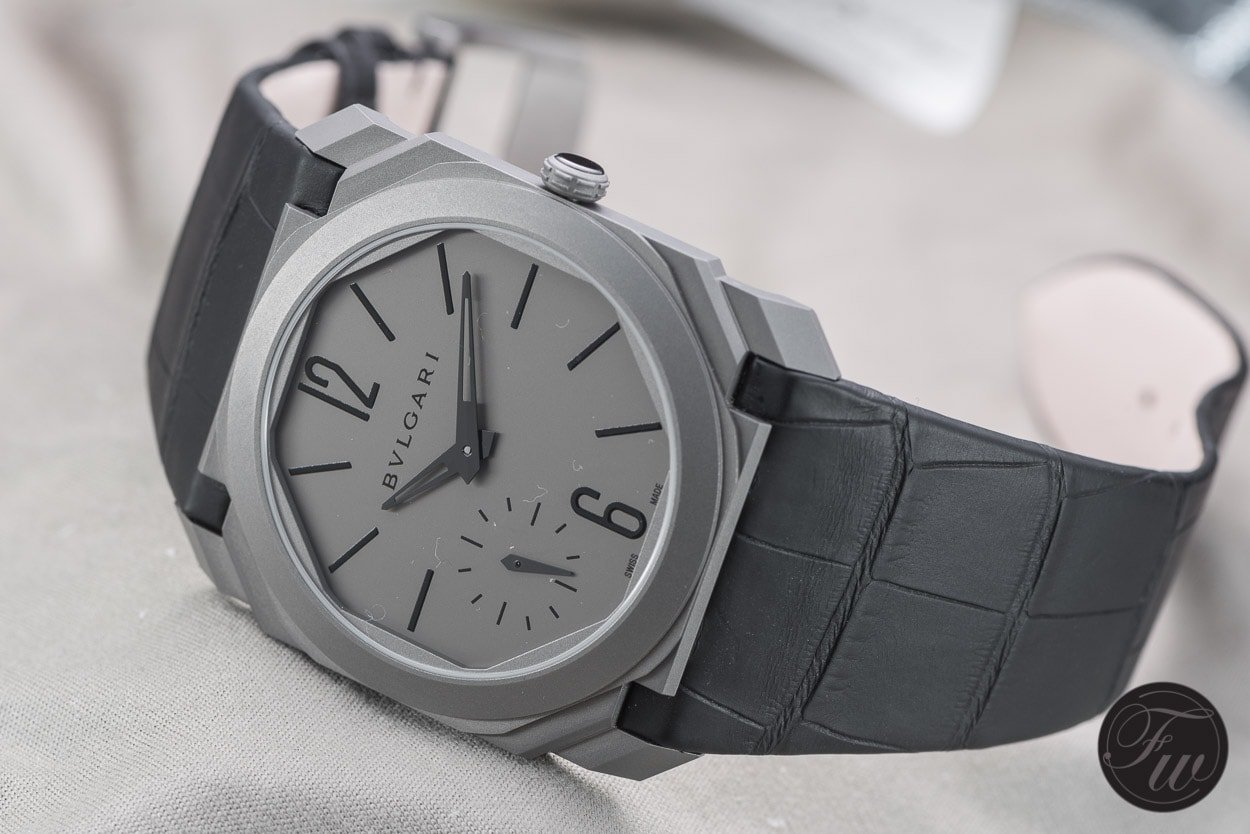 And then on a lower budget this one typically [Octo Finissimo Automatic]. My personal one is the titanium of last year on a leather strap. 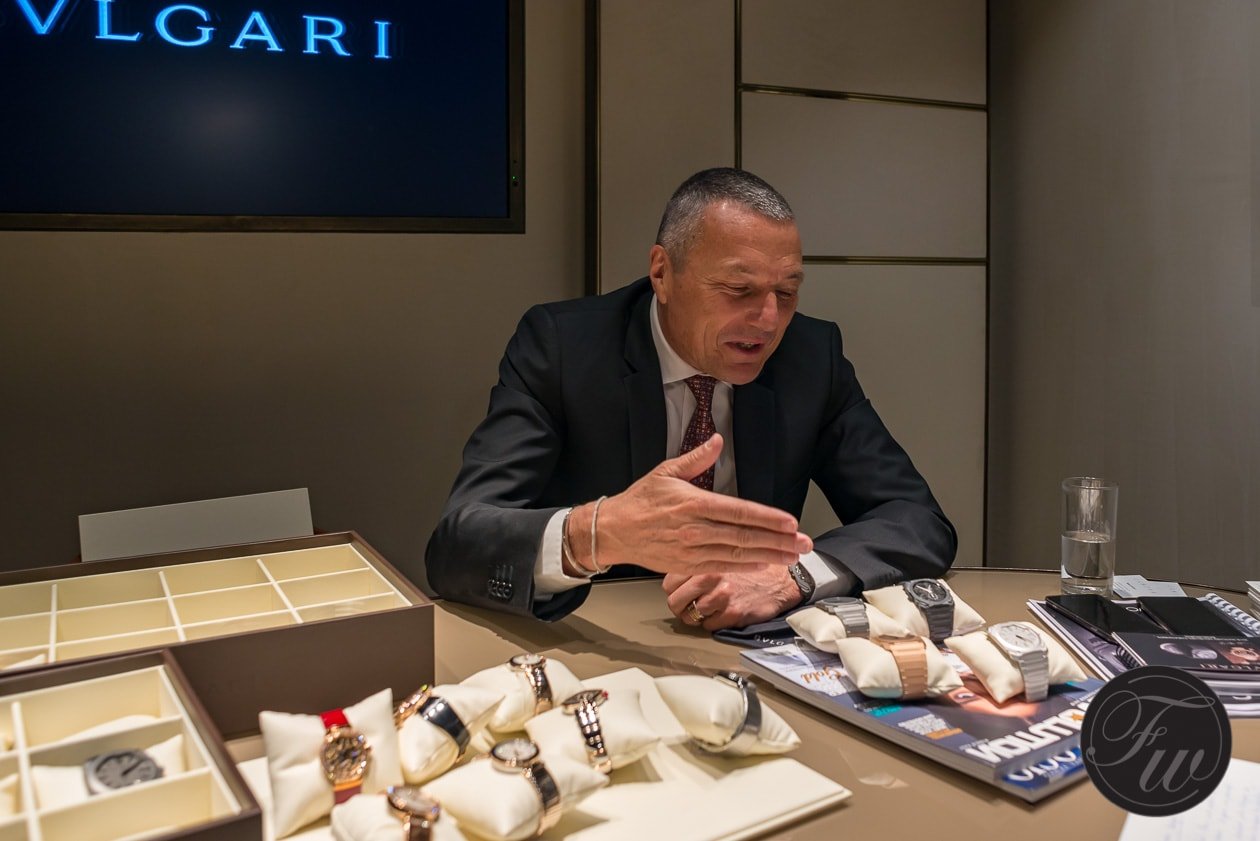 GRN: Thank you very much, I will start saving up for the Minute Repeater then. Thank you for the interview.

JCB: It was great meeting you guys, I will check Fratello Watches!

More information on Bulgari can be found at the official website.