The key to the strength of both the Casio G-Shock GG-B100-8AER Mudmaster and GR-B200-1B Gravitymaster watches is carbon fiber. The foundation upon which both of these incredibly tough watches are built is the Carbon Core Guard Structure. And while they may share some of their DNA and even some of their looks, the Mudmaster likes to play around in the dirt, while the Gravitymaster feels right at home up in the sky. That’s what Casio intended for these two Master of G watches. However, we found that both watches work equally well under everyday circumstances. That’s a good thing, as mud and cumulus clouds are not typically our natural habitat.

Over-engineered, that’s how we like it. Especially on the weekend or on vacation. Because it means you can just strap on a watch in the morning and forget about it while you’re having your morning coffee on the terrace and the dip in the sea right after. And in the case of the Casio G-Shock GG-B100-8AER Mudmaster and GR-B200-1B Gravitymaster watches, you can also wear them in stealth mode during the night thanks to their monochromatic color scheme. 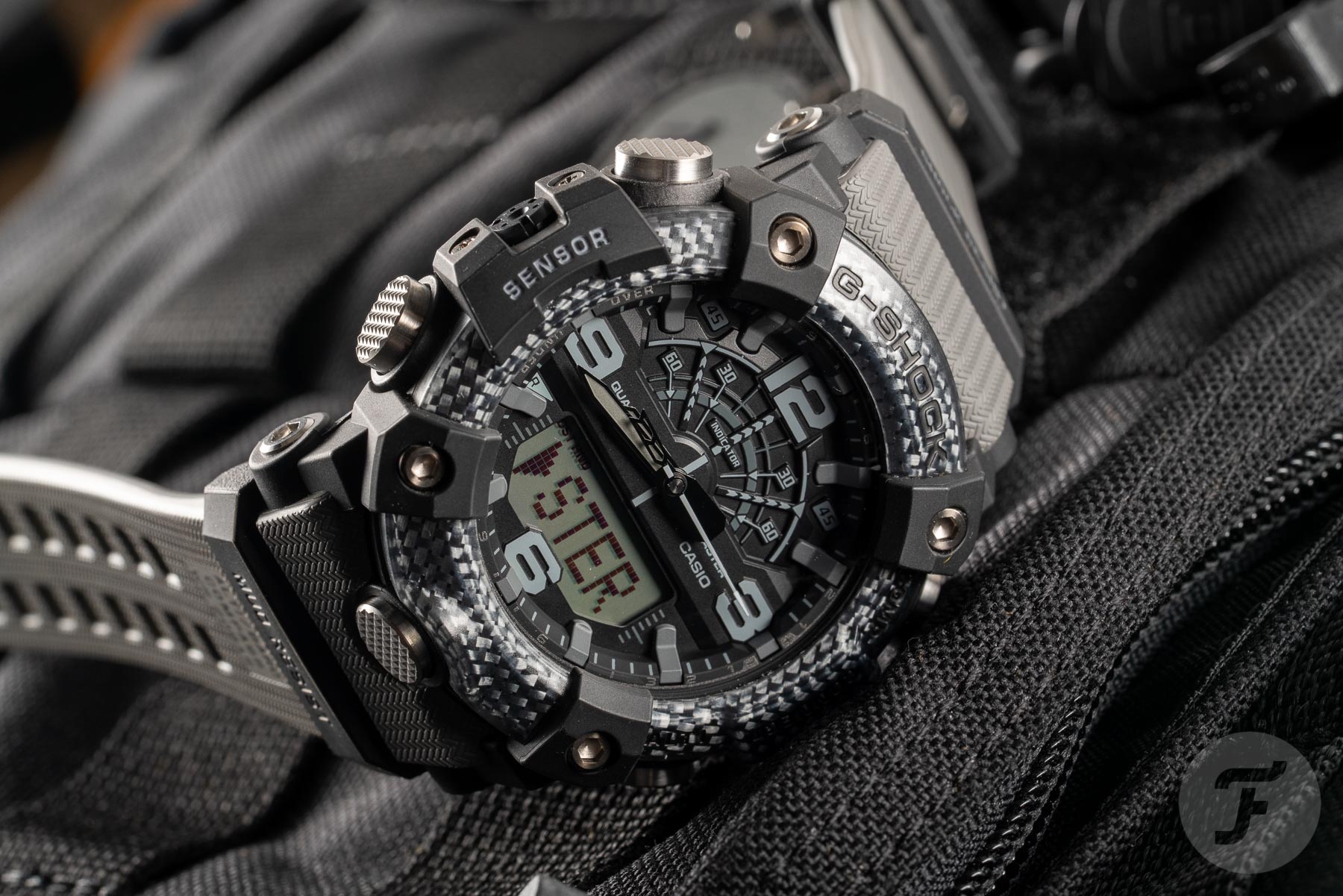 The G-Shock GG-B100-1B Mudmaster: rumbling through rubble without a care in the world

I know people who like to run outdoor obstacle races. Some of these races are aptly named Mud Masters Obstacle Runs. And since the Mud Masters runs have only been taking place since 2012, and the first G-Shock Mudmaster, the G-9000, was released in 2007, I have the feeling the name-givers of the race were heavily inspired by these do-it-all watches. It just makes sense. That big bold black watch that promises to keep out dust and mud is the ideal timekeeper for a run in the dirtiest conditions. Since the G-9000, the Mudmaster series has evolved steadily — and not just in terms of size. The latest G-Shock GG-B100-8AER Mudmaster has more functions than ever, including Bluetooth connectivity with your smartphone and the special G-Shock Connected app. 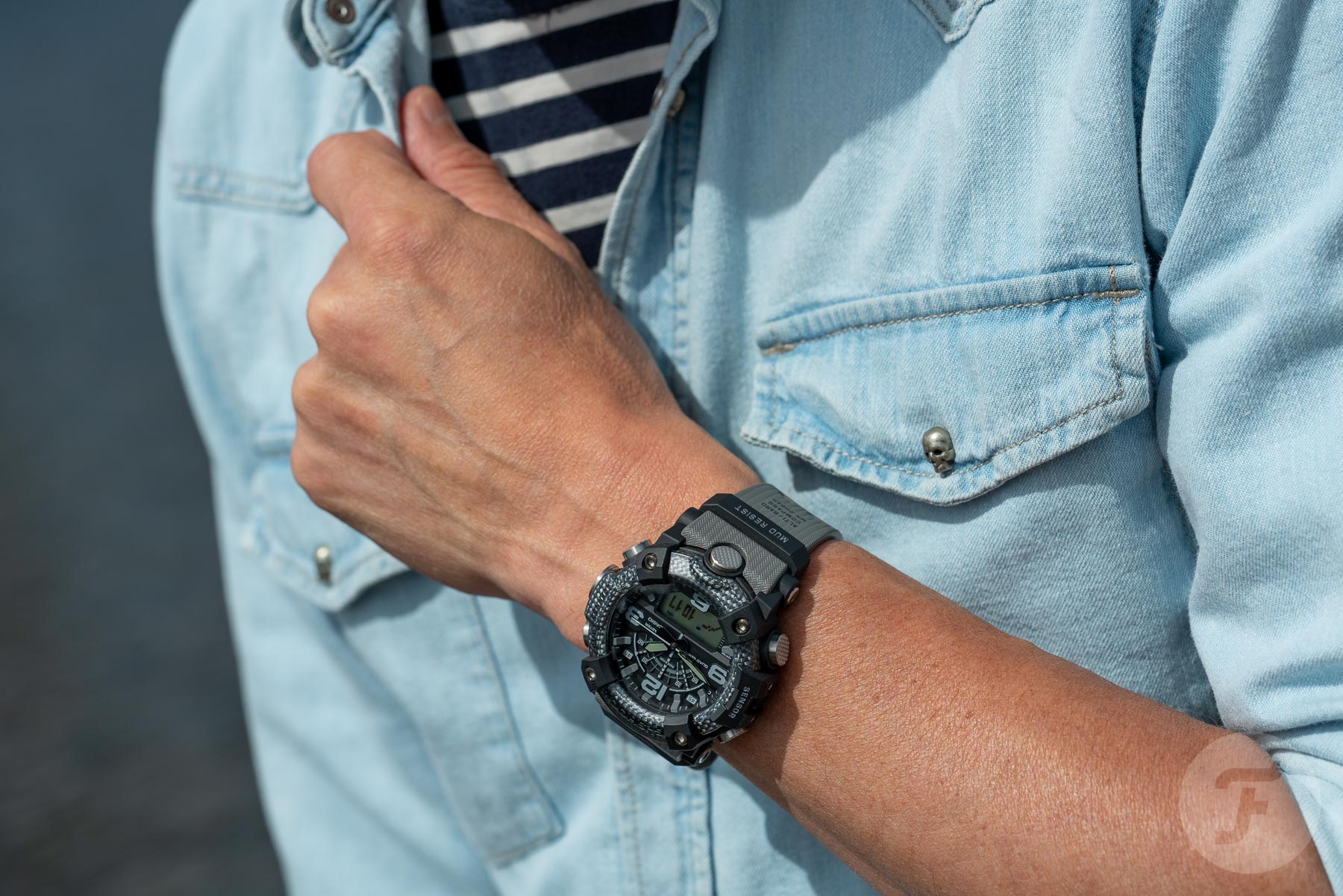 The color slims down the XXL Mudmaster visually

Any way you look at it, the gray and black, 92-gram GG-B100-8AER Mudmaster is a big watch. The case measures 52.90×19.3mm and has a lug-to-lug length of 55.4mm — just a tad smaller than the ginormous new Frogman. It is worth noting that due to the lack of traditional lugs and the ergonomic way in which the strap is attached to the case, the watch wraps nicely around the wrist and wears well despite its size. The color also slims things down visually somewhat, but there’s no denying the XXL size of the watch. In some way though, this is exactly what you want from a rugged instrument, you can anywhere you want (as long as it’s not deeper than 200 meters). I say “exactly what you want” because it’s clear that you want something subtle for your wrist, this was never the watch for you anyway.

The weave of the gray carbon gives the watch a technical look.

The basic construction of the watch is made of black resin. The monochromatic gray accents come from the watch’s carbon fiber bezel. The weave of the gray carbon gives the watch a tactical look. But the Mudmaster is not just about its looks. Carbon is also there to serve a genuine functional purpose. The two primary advantages of carbon are that 1) it keeps things light and 2) the carbon fiber inserts pressed between layers of resin are also extremely tough. And that means that it does a fantastic job of protecting both the scratch-resistant mineral glass and the electronics at the core of the watch in the extreme conditions it is intended to face. 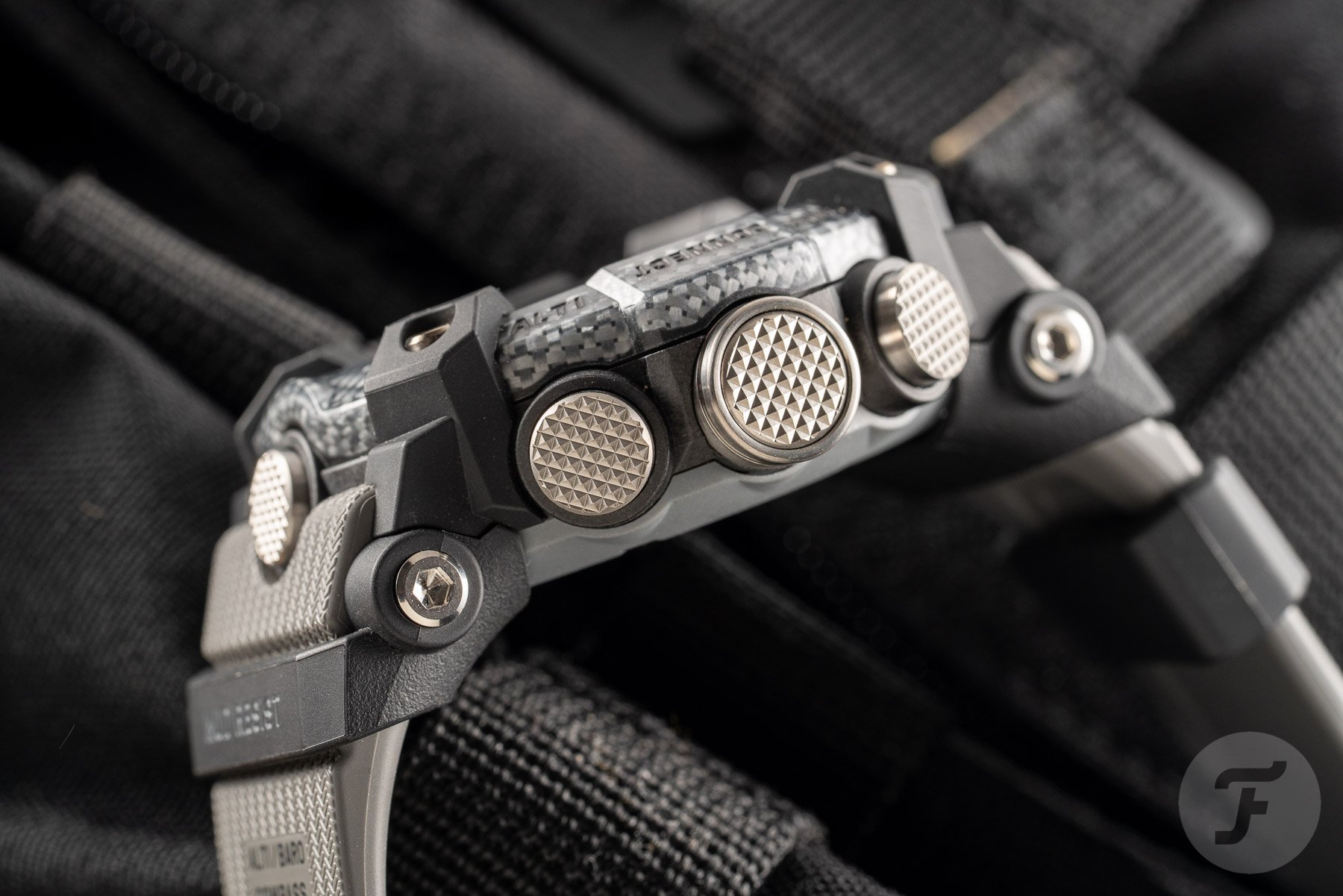 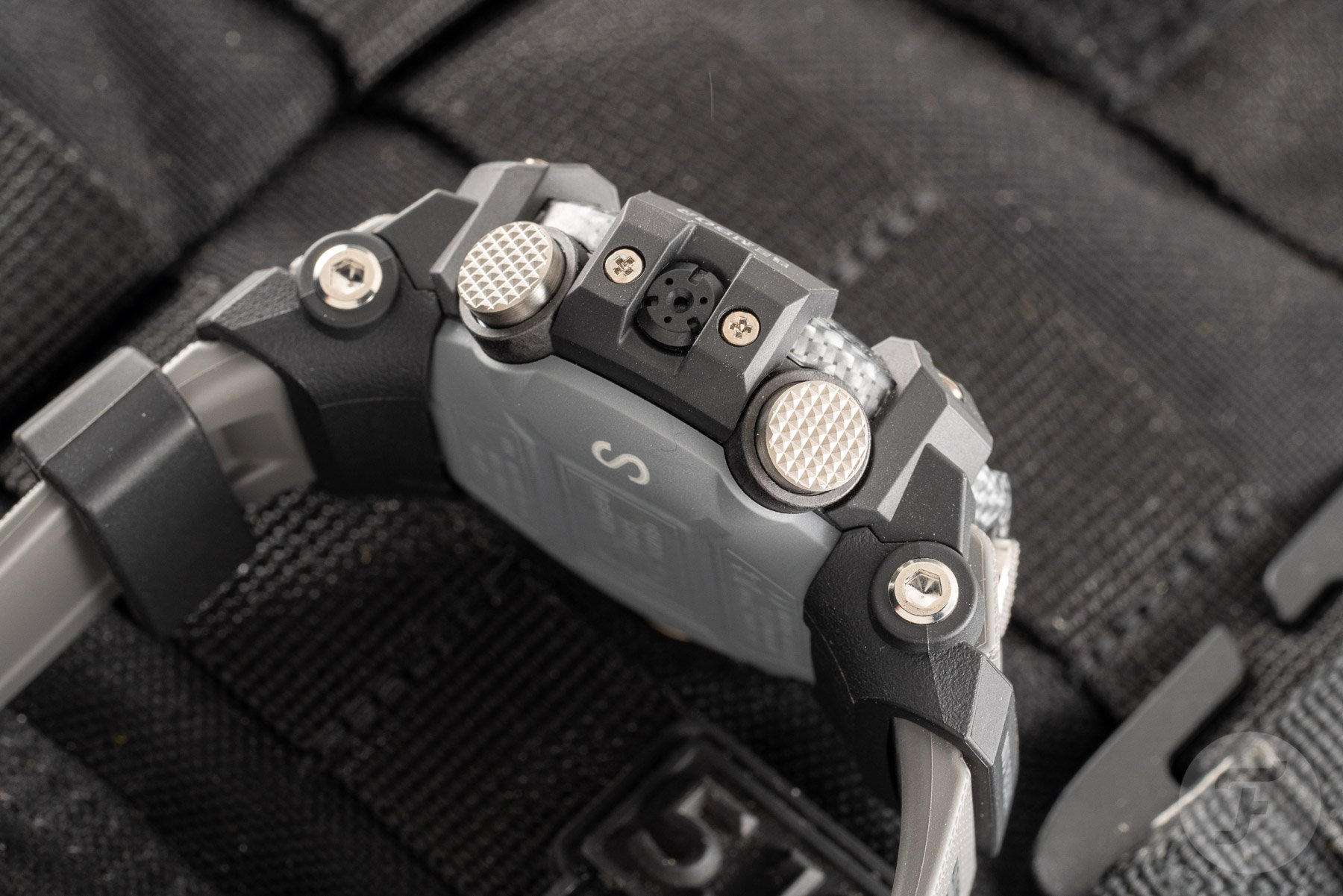 To keep the immense GG-B100-8AER Mudmaster comfortably in place, a supple gray rubber strap is used. The pin buckle with two pins is big and easy to operate, even with gloves on, and contributes to the overall adventurous look. Also adventurous, are the countless functions. Most of which, will undoubtedly come in handy when you’re out and about in the great outdoors. What you get for €349 is a virtually indestructible watch, featuring a large selection of potentially life-saving and practical functions. 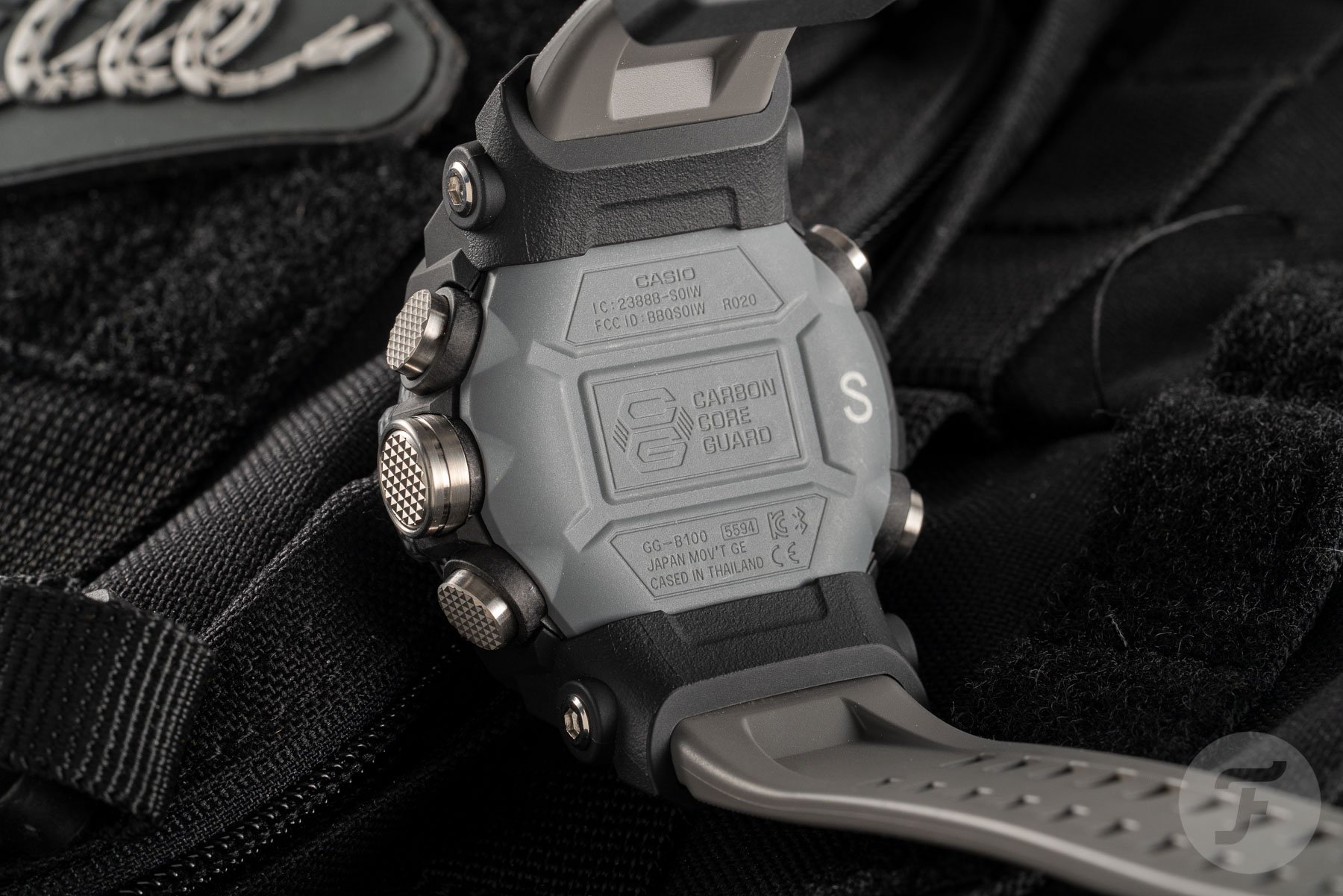 Four sensors to keep everything in check

Here are most of the functions of the Casio GG-B100-8AER: automatic LED light and Super Illuminator, digital compass (with hand-indication of north and magnetic declination correction), altimeter with a measuring range of -700 to +10,000 meters, barometer, and thermometer. Not an immediate life-saver, but the step count using a 3-axis acceleration sensor could prove to be in the long run. At the very least it will help keep you on track for a healthy lifestyle. 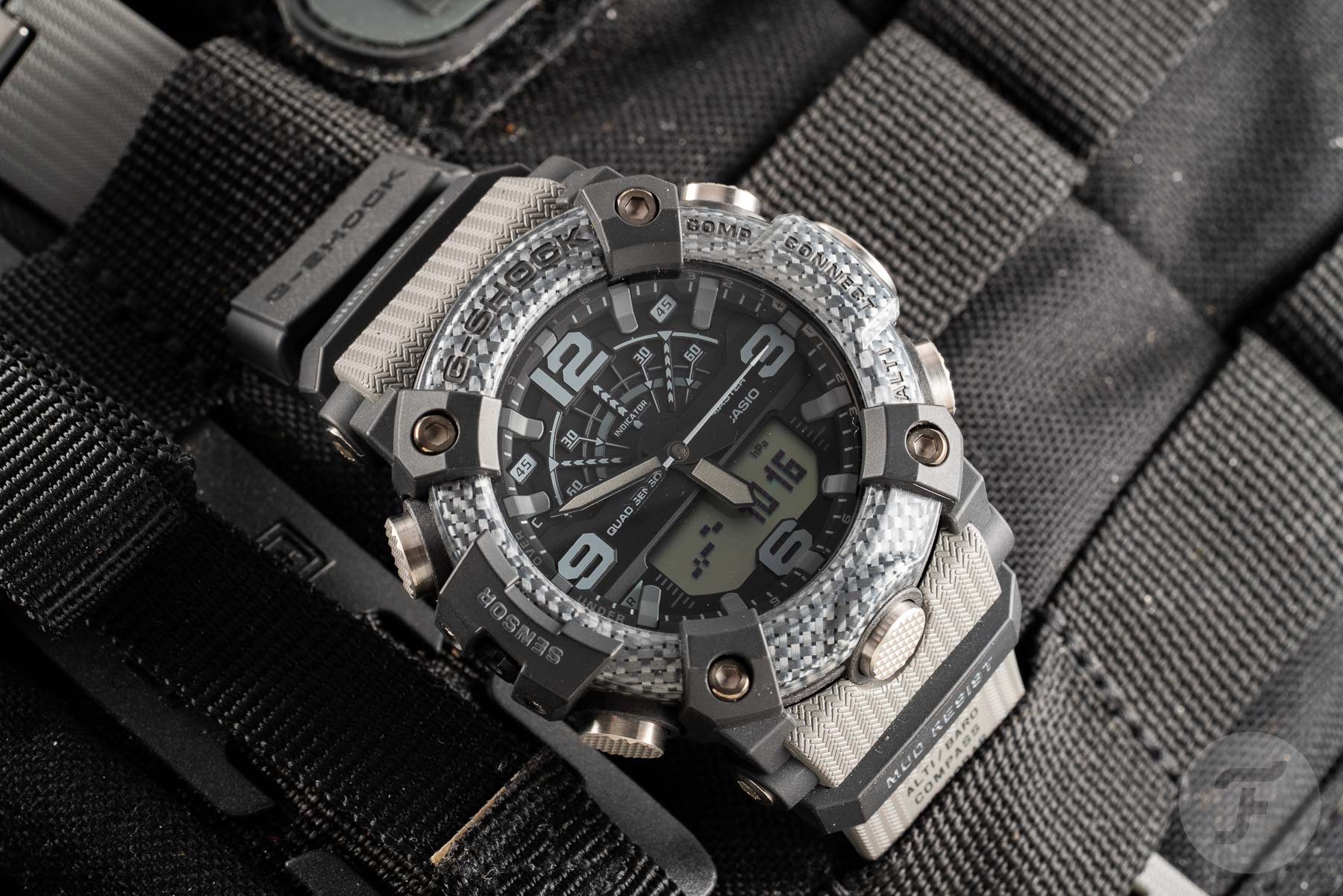 Other noteworthy functions are the 38 time zones, a daylight savings time on/off option, a 1/100-second stopwatch, and a countdown timer. All these useful features come thanks to the Quad Sensor of the 5594 module, which is powered by a CR2025 battery, giving it an expected lifespan of 2 years.

For more information on the GG-B100-1B Mudmaster, please check the official website. 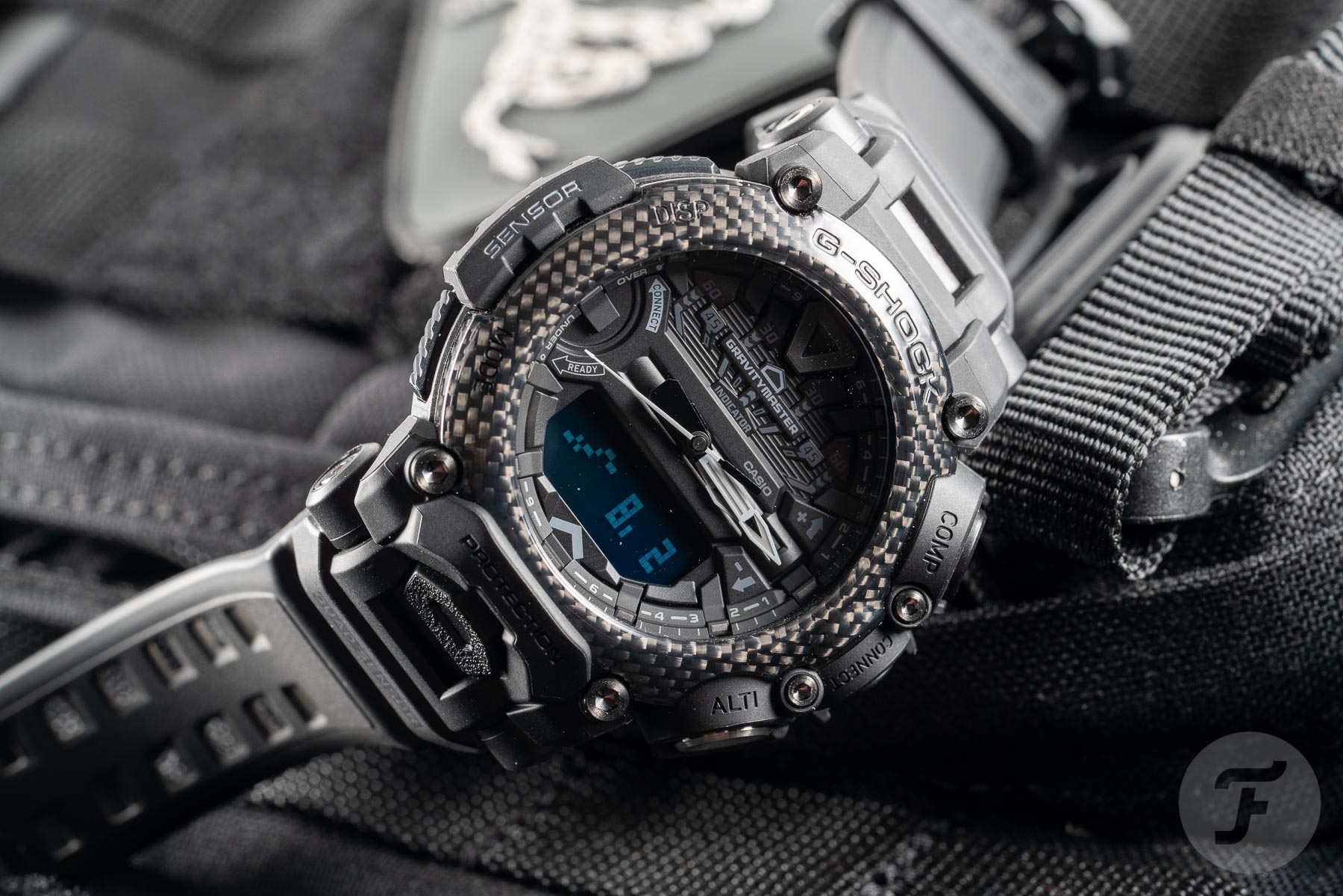 The newest Bluetooth Quad Sensor Gravitymaster has a lot in common with the Mudmaster. It may use another module, the 5635, but it uses the same CR2025 battery, also with an expected lifespan of 2 years. It also shares some structural similarities, such as the carbon fiber bezel that is made up of three layers of resin with carbon fiber inserts. Thanks to the semi-transparent top layer, the weave of the carbon fiber is clearly visible. Giving the Gravitymaster that same tactical aesthetic. 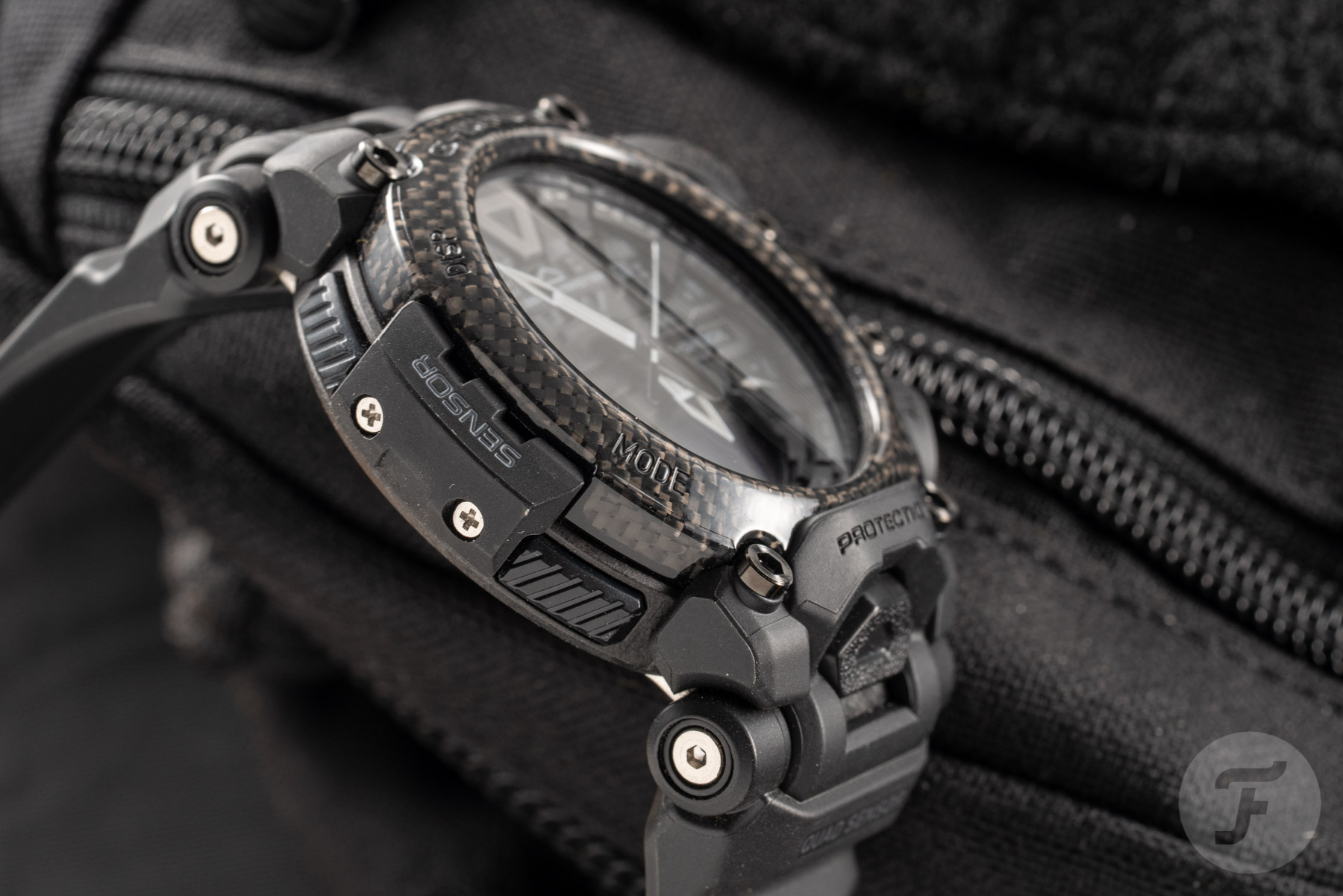 High above the dirt

But whereas the Mudmaster loves to dwell in the dirt, the Gravitymaster wants to stay as far away from it as possible. Instead, this particular G-shock feels at home way up in the clouds. The all-black GR-B200-1BER Gravitymaster is a 54.1×18.3mm modern take on a hyper-functional pilot’s watch with a lug-to-lug length of 63mm and a weight of 80 grams. It’s both smaller and lighter than the Mudmaster. It also weighs less heavily on the budget with a price of €299. 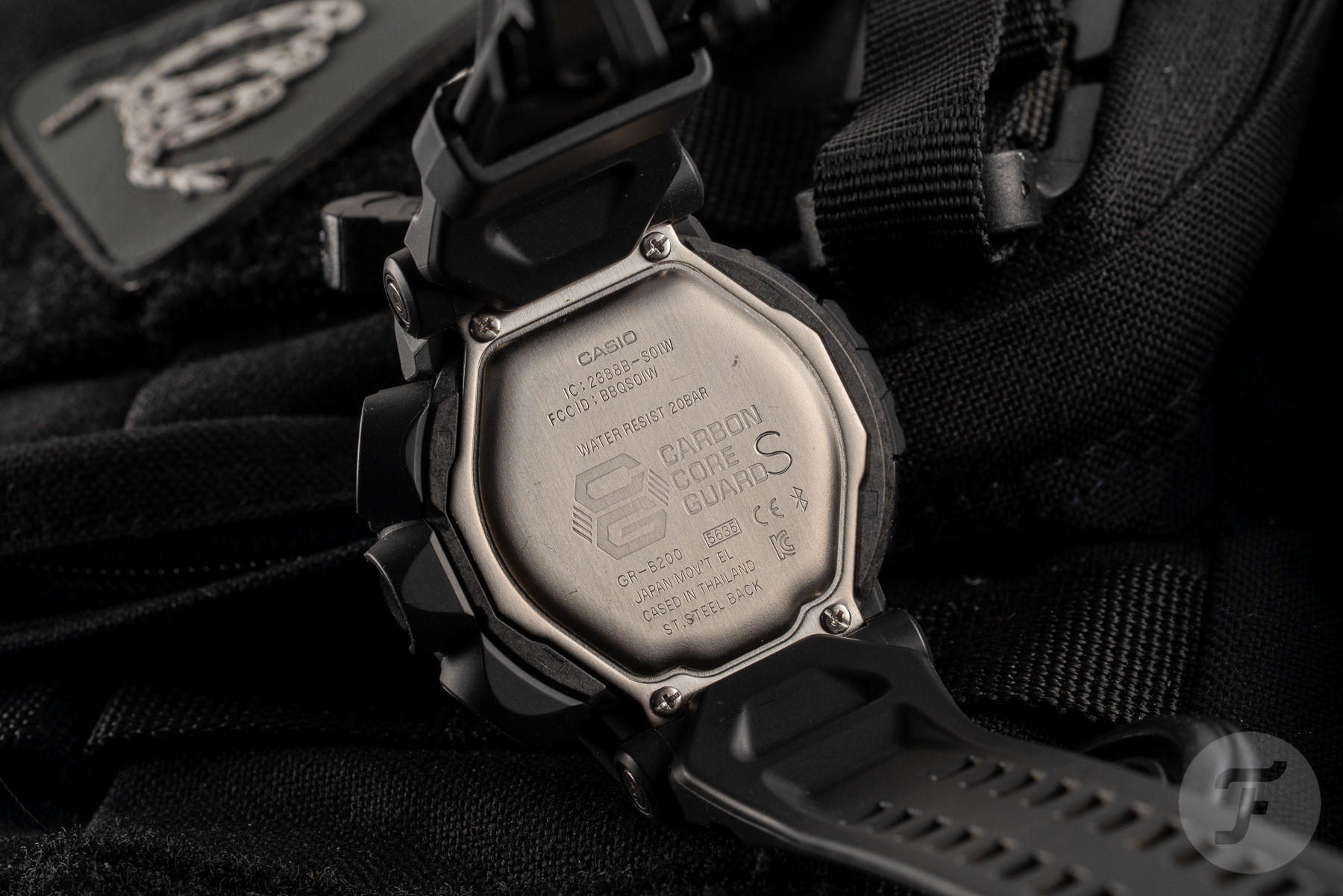 It’s the aviation and navigation functions that set this pilot’s watch 2.0 apart. The GR-B200-1BER Gravitymaster uses the special G-Shock smartphone app that simplifies the configuration of the watch settings. It also provides a Mission Function, where the app automatically records altitude data measured by the watch and route information acquired by the smartphone’s GPS. This allows the user to keep a detailed flight log which can later be accessed directly through the app.

… all the while, the digital display shows the distance to the location.

There is also a navigation feature, where manually obtained altitude points can be displayed along the routes. If you’re about to navigate your single-engine Cessna 162 Skycatcher from point A to point B, it’s also good to know that the instrument on your wrist has a Location Indicator feature. This function can be used to record your current location in the phone app. After flying to the set destination, the watch’s seconds hand will indicate the bearing back to the recorded location. And all the while, the digital display shows the distance to the location.

Looking to take to the skies? You can find out more about the GR-B200-1BER Gravitymaster on Casio’s website right here. 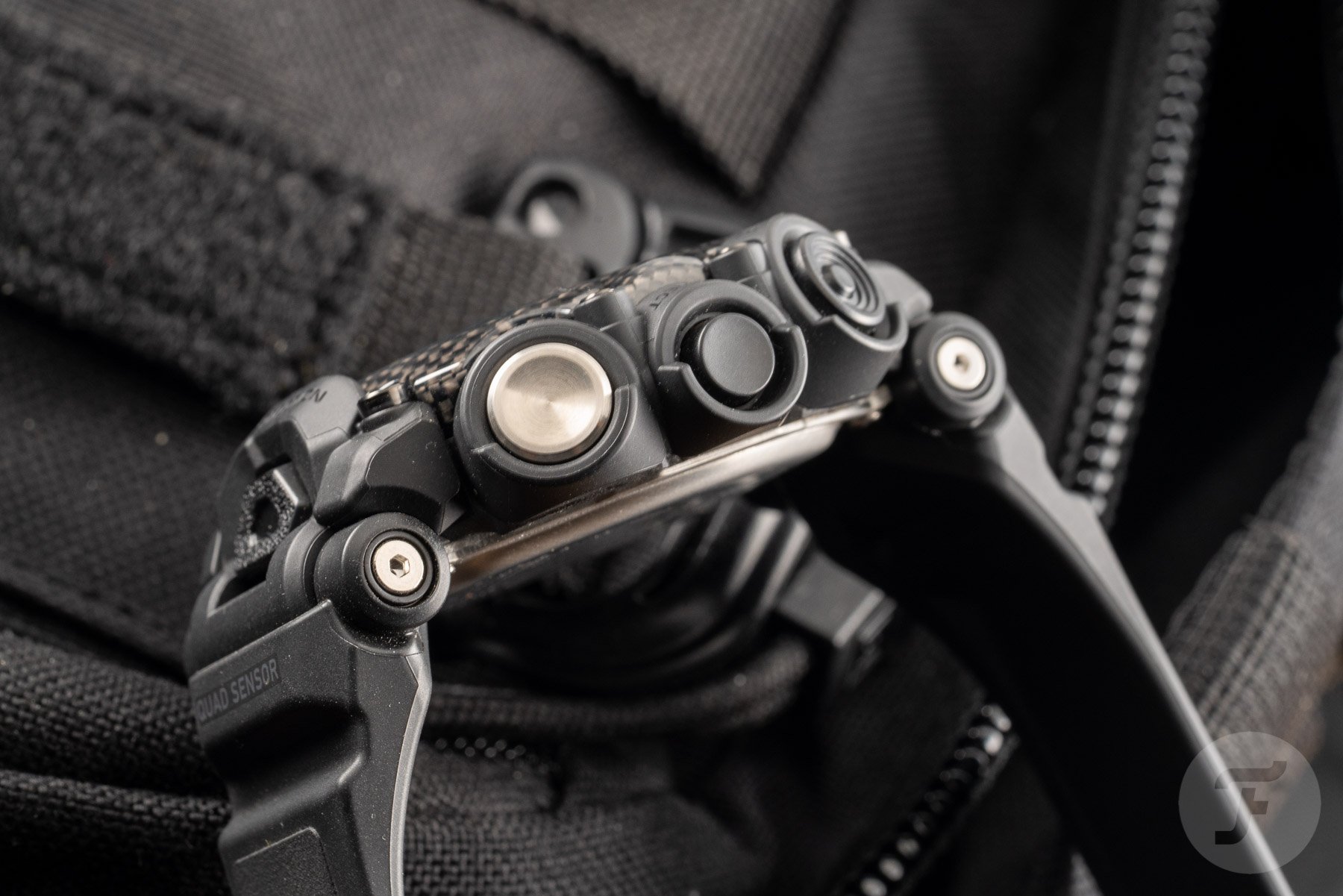 Which one is better for everyday use, the Mudmaster or the Gravitymaster?

You may be asking yourself that very question right now, so I will do my best to answer it. If I had to choose between these two stealthy do-it-all G-Shocks, I would look at the choice from two different perspectives: looks and practicality. When it comes to practicality, the GG-B100-8AER Mudmaster has the edge because of its, somewhat more useful, hiking-related functions. The strap on the earth-dwelling watch is a bit more flexible and therefore more comfortable than the one on the Gravitymaster.

The buttons resemble those on a helicopter control stick, or so the brand tells me.

When it comes down to looks, I prefer the way Casio has shaped the three buttons on the right side of the sky-dwelling watch. The buttons resemble those on a helicopter control stick, or so the brand tells me. I don’t know about you, but using my imagination can definitely see it. The button positioning also makes the watch easy to operate. This added bit of functionality aside, the all-black look is also a bit more to my liking than the gray/black color scheme. The “murdered out”, complete Black-Out look (as Casio named it), is the way to go if you ask me. It’s Casio to the rescue, however, as the GG-B100-1B Mudmaster is also available in a similar blacked-out color scheme. 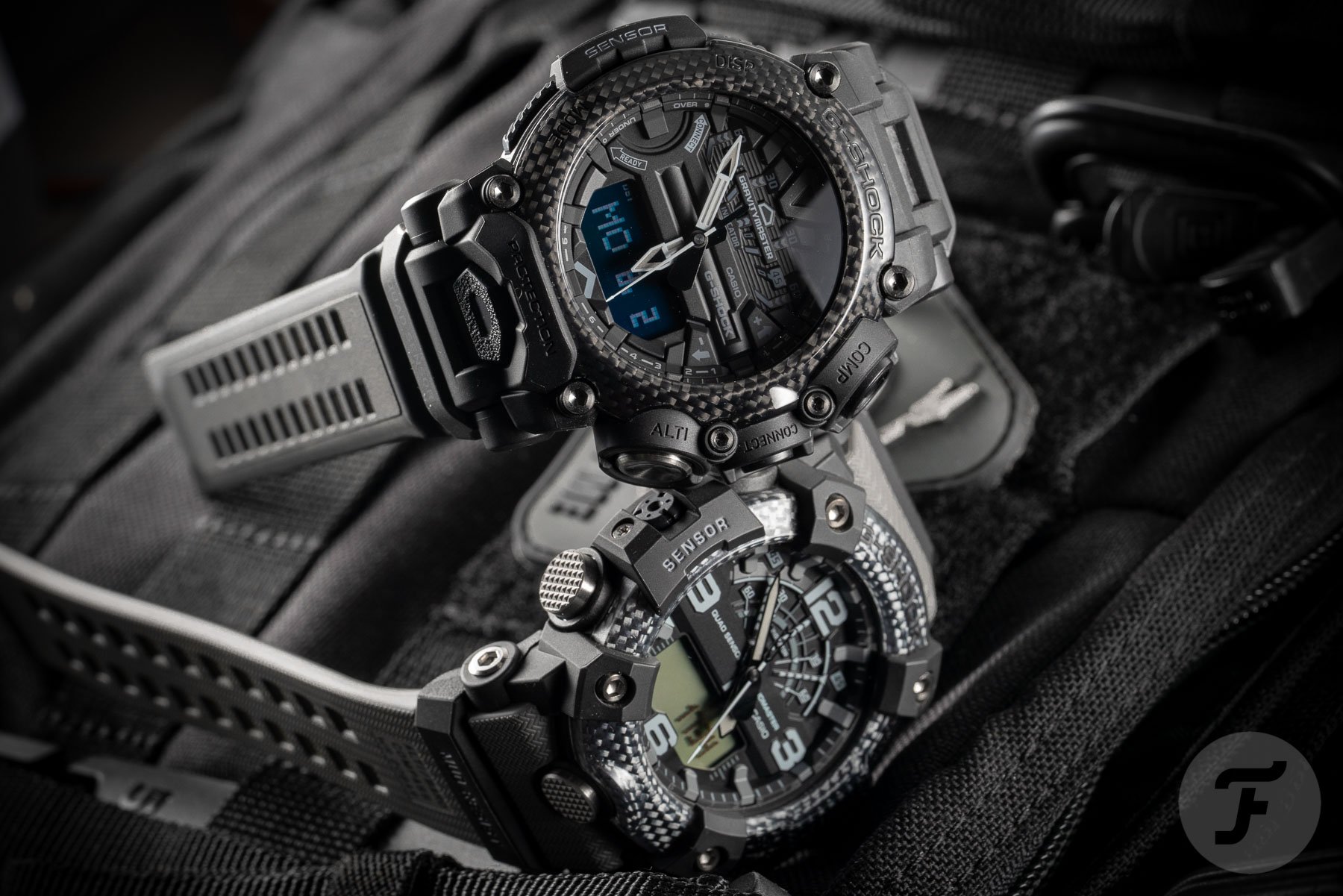 One last thing to note is that both of these watches work equally well poolside, far away from cumulus clouds and dirty obstacle runs, as they feature 200m water resistance. Big and bold as these G-shocks may be, they have all the features to back up their highly tactical looks. There is no pretender syndrome here. These are watches that truly deliver the goods above and beyond what we have previously seen. What do you think of these two beastly beaters? And which of the two would be your pick? Let me know in the comments below.