Quite literally, due to the single production run and its polarizing purple disguise
Lex Stolk
comments 7
Share

In Cathy E. Mann’s children’s book “Color Me Purple” the million-dollar question is: what would make the world a better place? The answer is, color, of course! And the color purple turns out to be particularly helpful in creating a happy vibe. The blueish gray and purple hue of the Casio G-Shock GMW-B5000PB-6 Twilight Tokyo is reminiscent of the cityscape of Tokyo at dusk. So why did I bring up the book about happiness and not the buzz of Ginza at night? I will explain.

I’m referring to Cathy E. Mann’s children’s book “Color Me Purple” because the mostly purple Casio G-Shock GMW-B5000PB-6 Twilight Tokyo has the potential of spreading happiness all over the world. But it won’t because it’s a single production run. Happiness is reserved for a yet unknown number of people. You might be thinking “that’s just plain sad.” But it’s not all doom and gloom, so let’s start with some good news. The 49.3 × 43.2 × 13mm G-Shock GMW-B5000PB-6 Twilight Tokyo is made of steel and not titanium, so the price is somewhat more budget-friendly than that of, let’s say, the colorful GMW-B5000TR-9ER. The new Tokyo-inspired steel “Square” will retail for €549, a price comparable to other versions in the same alloy. 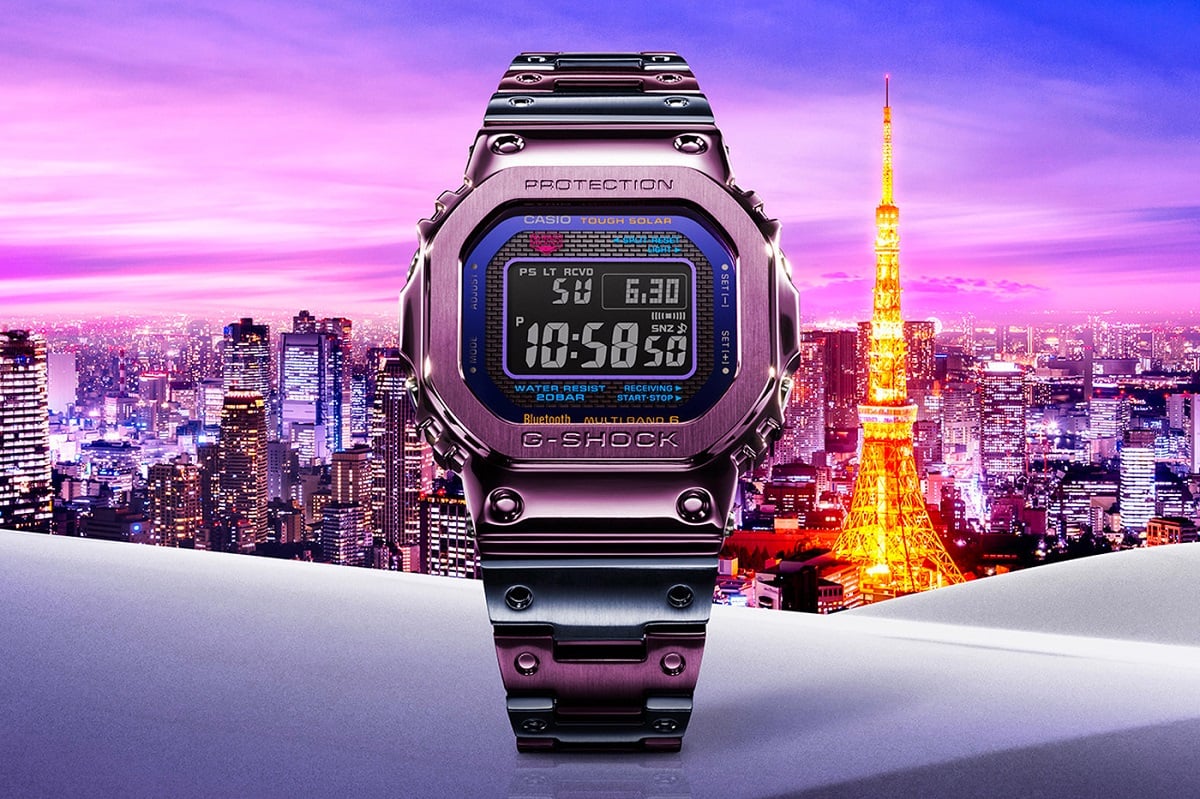 Casio G-Shock GMW-B5000PB-6 Twilight Tokyo, a limited edition or not?

The bad news is of course the single production run which makes this eye-catching purple happiness machine effectively a limited edition. A limited-edition of unknown numbers no less. I think that fact kind of raises the desirability even more. Is that a good thing in a watch universe where limited editions sell out in minutes?

… you will recognize Twilight Tokyo wearers from a long distance by their blissful appearance.

Well, I know for a fact that Casio won’t build a measly number of GMW-B5000PB-6 Twilight Tokyo watches. They are within reach of many, but just how many and for how long is the million-dollar question. What I do know is that soon you will recognize Twilight Tokyo wearers from a long distance by their blissful appearance. 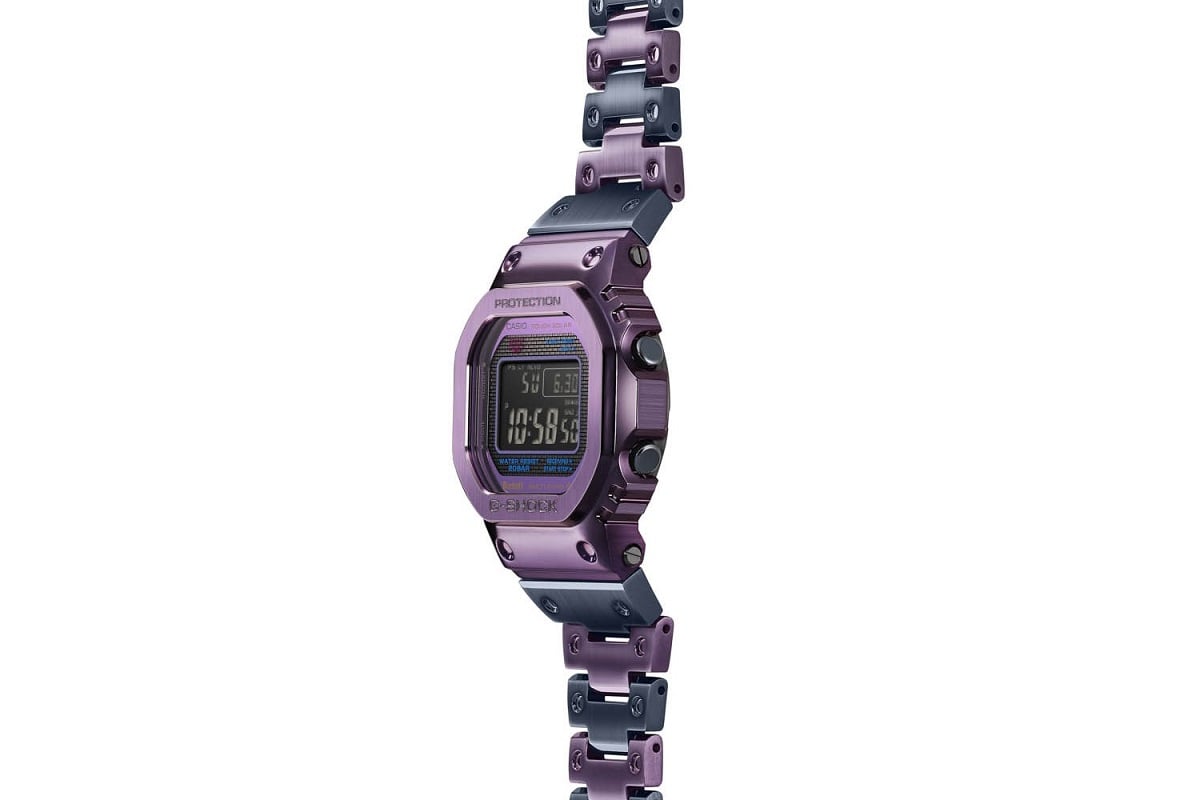 Less elusive are the technical specifications of the G-Shock GMW-B5000PB-6. The watch features a stainless steel bezel with purple ion plating (IP) and alternating blue-gray and purple bracelet links. You might think the partly polished and brushed Twilight Tokyo is a shiny affair, but the newly developed ion plating has a muted, maybe even dusk-like hue. The negative display shows blue and orange text representing the lights of buildings in Japan’s vast capital. 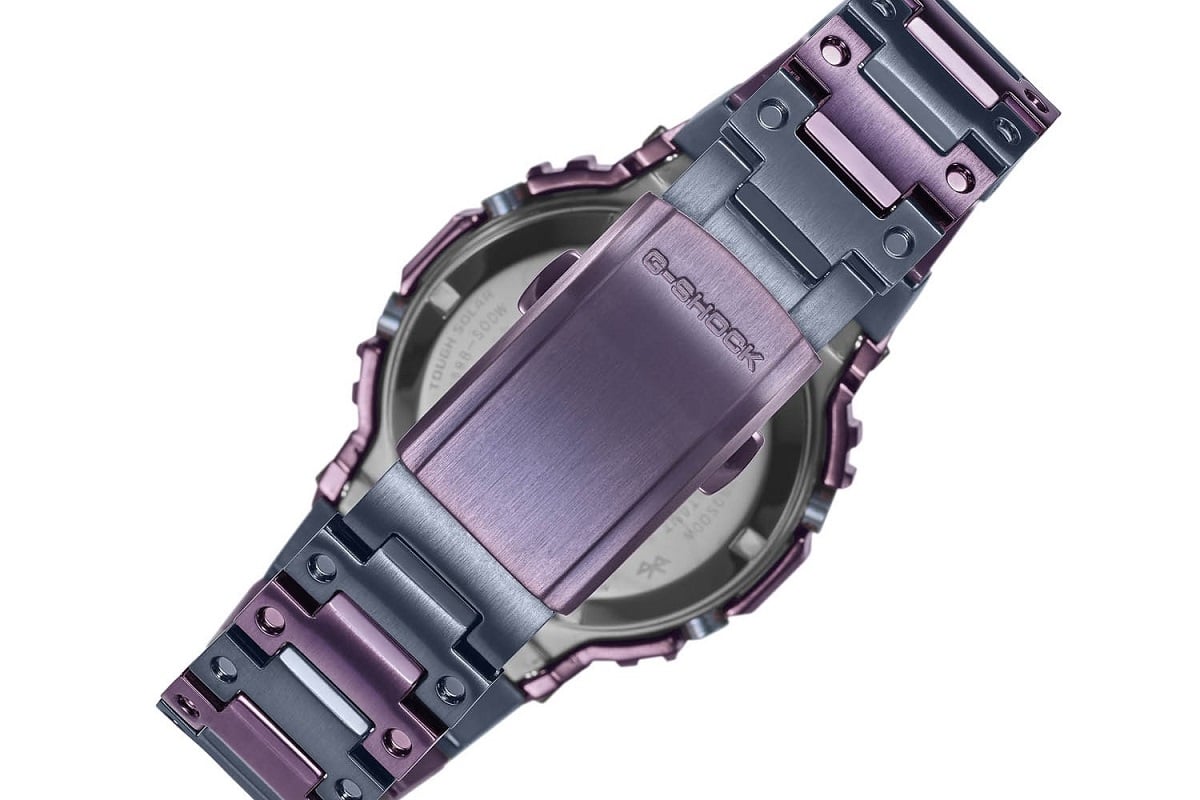 The purple and blue-gray IP finish is a new approach to Color Material Finish (CMF) design. In this emerging discipline, designers accentuate already well-designed products’ color, material, and finish. CMF focuses on the chromatic, tactile and decorative identity of products and environments. And that led to a watch that is inspired by the beauty of Tokyo at twilight, a time when light and darkness interact and the lights on the streets and buildings come on. 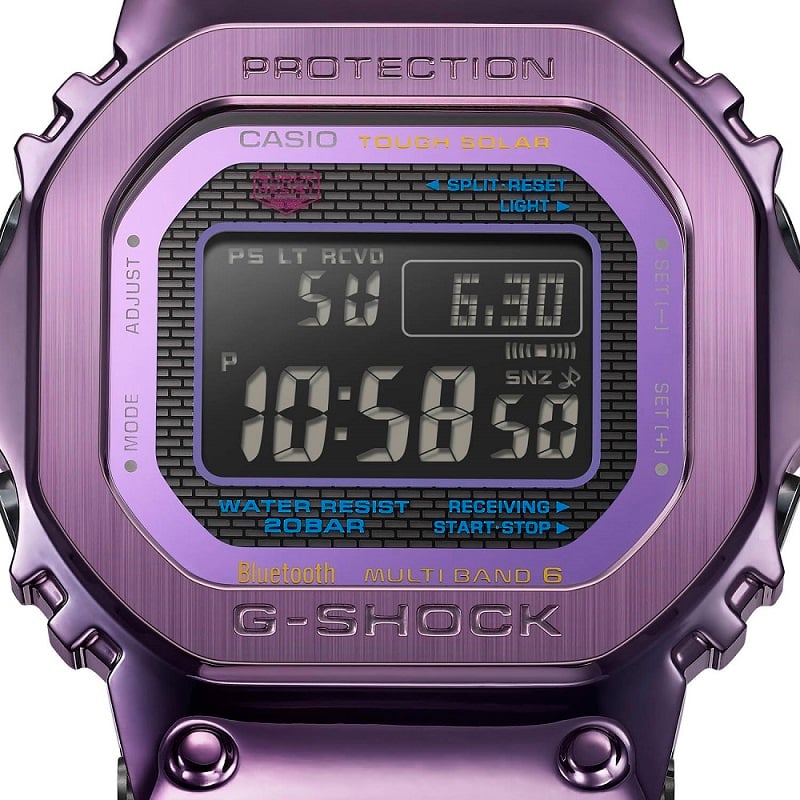 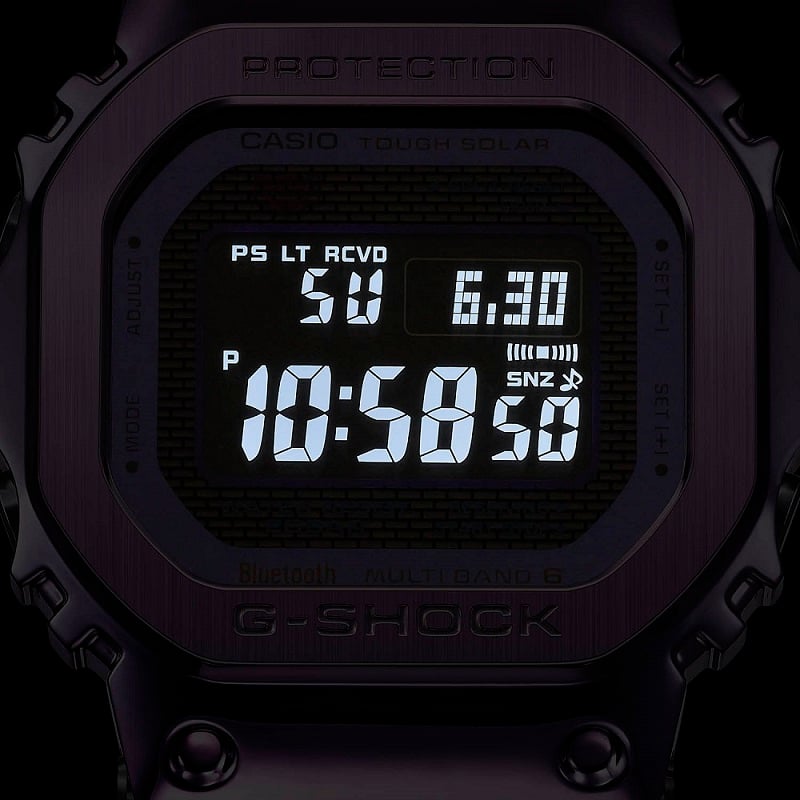 Solid features in a solid “Square”

Good to know is that the GMW-B5000PB-6 has a stainless steel inner housing with a screw-down back cover; this is a solid “Square”. And using the GMW-B5000PB-6 Twilight Tokyo is a breeze for those familiar and unfamiliar with a G-Shock because of the very handy Bluetooth smartphone link. Other key features are its shock resistance (duh!), 200-meter water resistance, Tough Solar power source, Multi-Band 6 automatic time synchronization of the radio, and LED light. 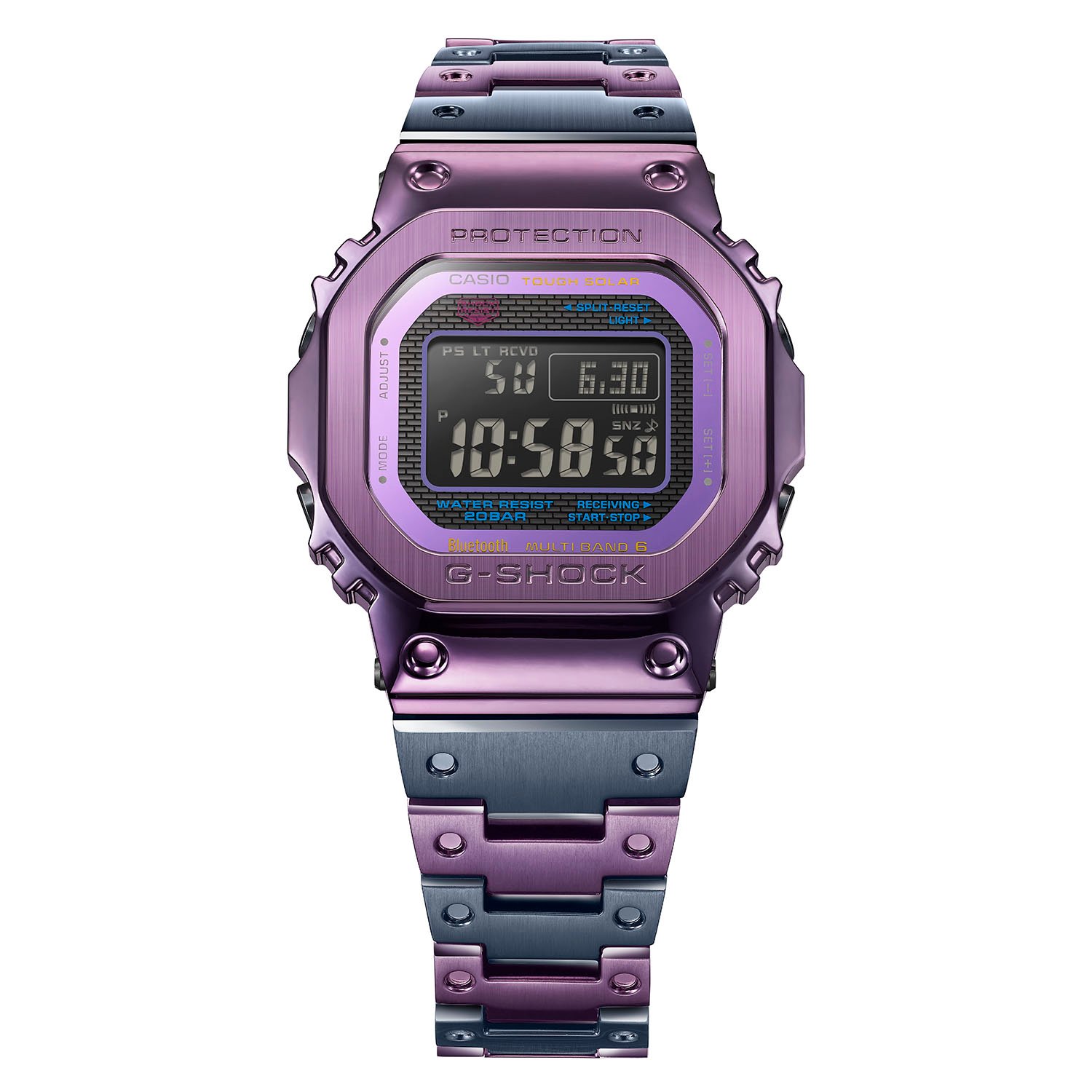 The fact that the GMW-B5000PB has the Mobile Link functions that pair via Bluetooth also opens other neat features apart from accessing internet timeservers to ensure accurate time. If you pair the watch with your Bluetooth headphones, you will hear the important alarm you set. Plus every (annoying) single bleep at every single full hour, but still, you could do that if you really don’t want to miss a call/meeting/train etcetera. And let me not forget to mention the handy phone finder function that further helps to make this “happy” watch also a very useful watch. As I said, the Casio G-Shock GMW-B5000PB-6 Twilight Tokyo is not for everyone because of its distinct and, undoubtedly, polarizing colorway and limited availability. But for those who seek happiness in a wrist-sized package, I wish you happy hunting online or in a store near you!

Find out more about the Casio G-Shock GMW-B5000PB-6 Twilight Tokyo on the brand’s official website.