Back to basics. In 1983, designed and developed by Kikuo Ibe, Casio introduced the first watch according to their Tripple-10 concept. Waterproof to 10 bar, drop-proof to 10 meters and 10 years battery life. The Casio G-Shock DW-5000C was born and could withstand a pressure of even 20 bar. 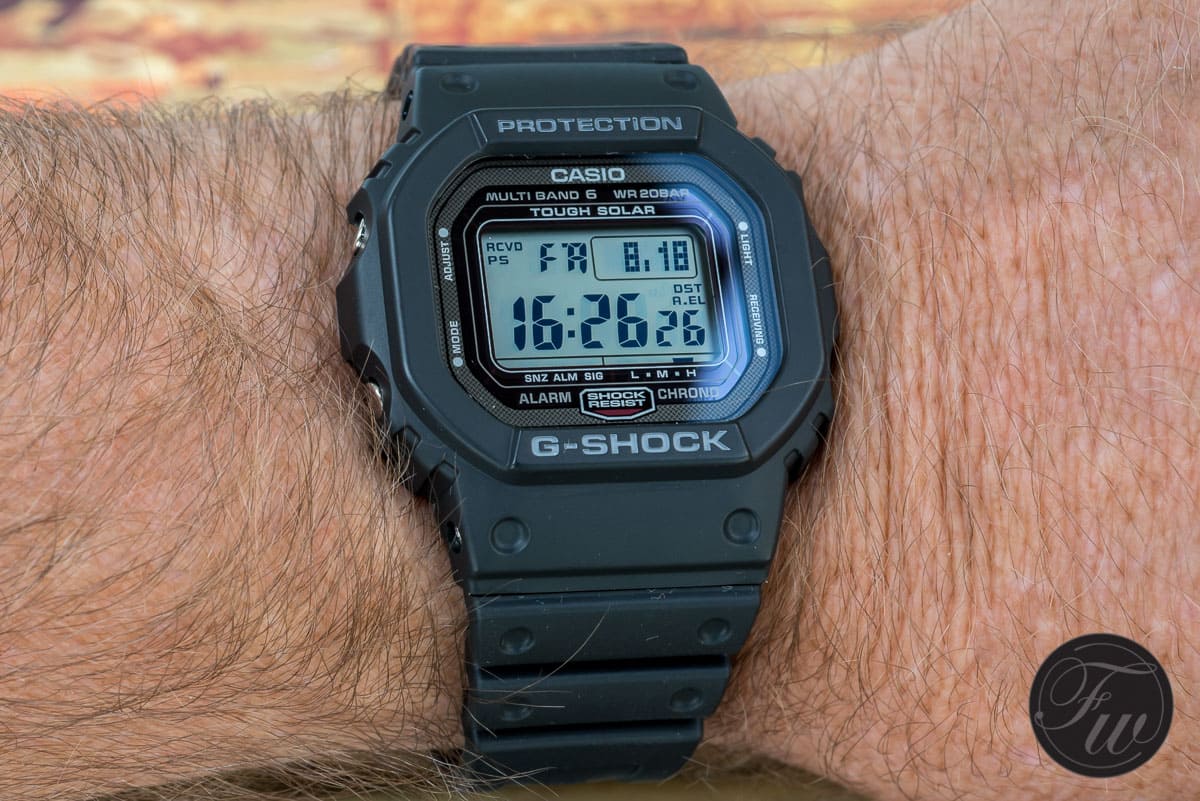 The illustrious GW-5000 on my wrist

After the introduction of the G-Shock DW-5000C, the model was slightly changed with a different module and dial in 1987. The type indication became DW-5600C. The G-Shock still had a solid metal inner casing which was placed in a plastic outer case with much space to damp eventual shocks towards the movement. Then in 1996 Casio changed the construction of the G-Shock to become an all plastic casing with just a metal case back. The DW-5600E saw the light, now more than 20 years ago. 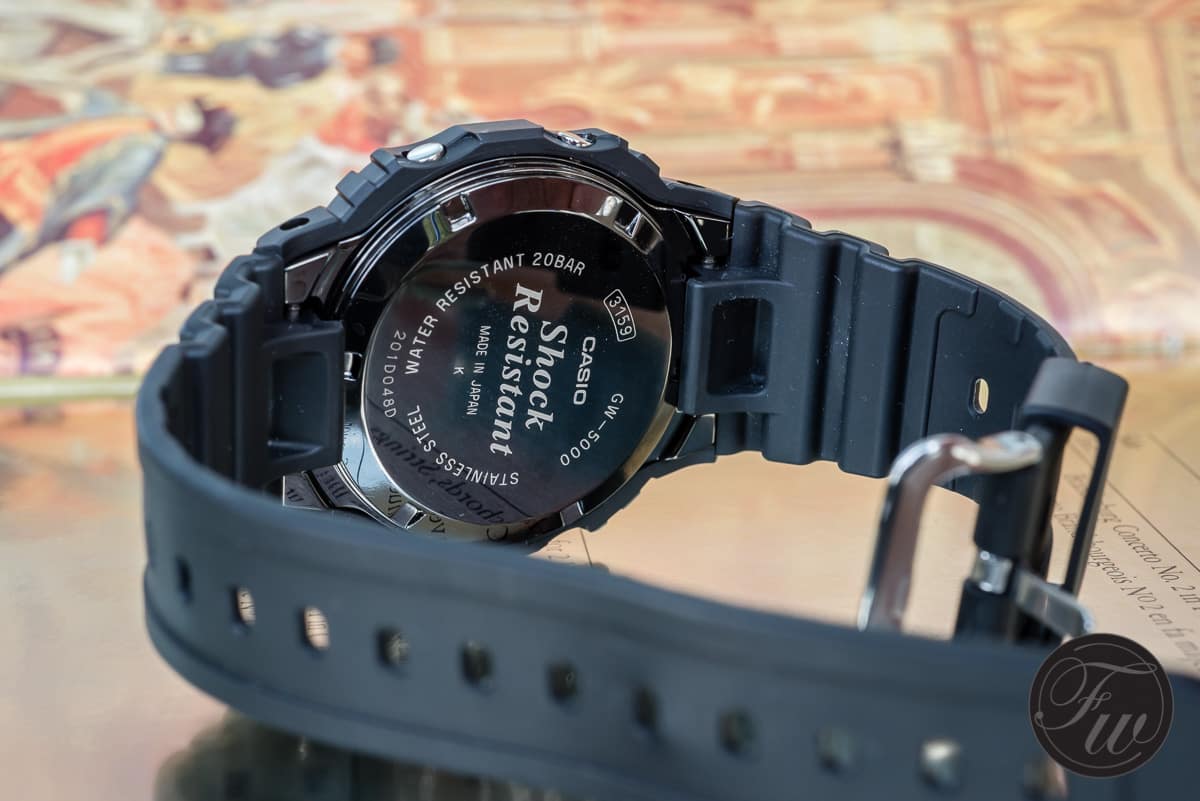 A bargain for a historical significant watch

This very G-Shock DW-5600E model is still available today. I know of at least two different colour executions. One with white printing, a clear display background and steel coloured pushers (ref DW-5600E-1VC). And one with with gold-like printing, a gold coloured display background and gold coloured pushers (ref DW-5600EG-9VQ). I think the first model is mainly aimed at European customers and the US, while the second is seen more often in Asia. 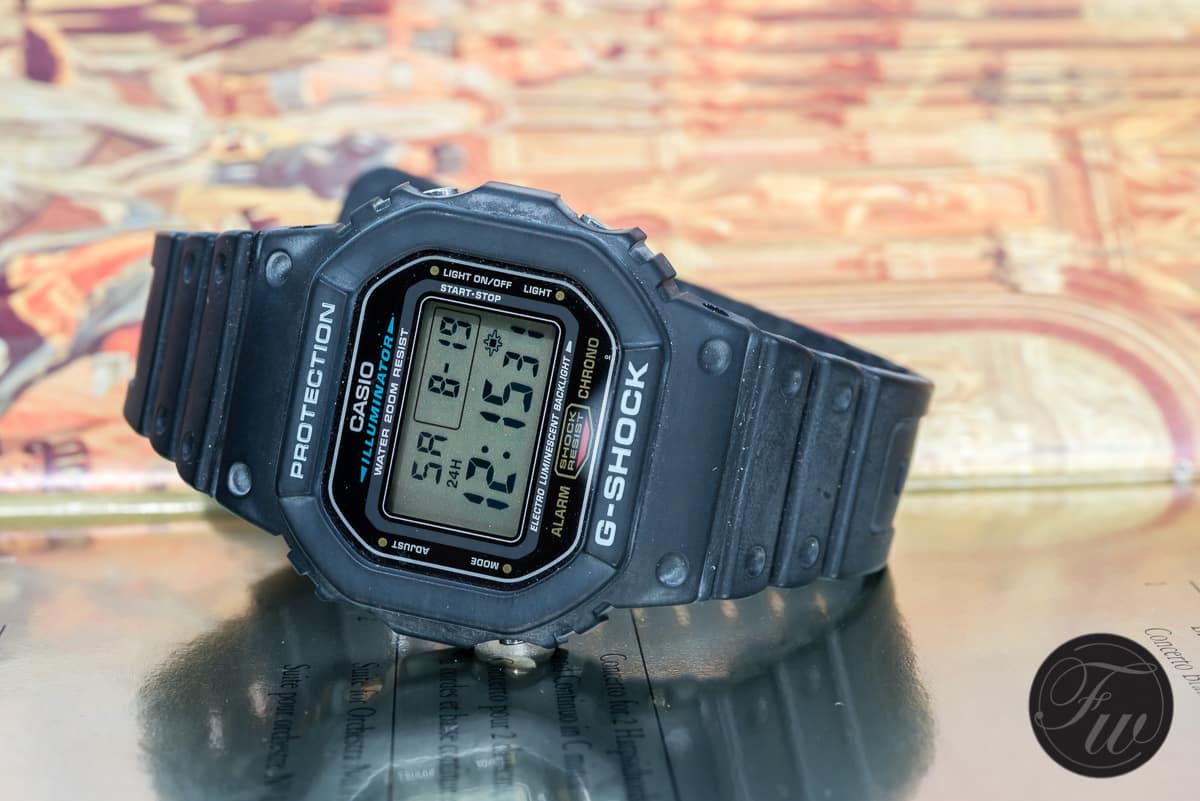 The most basic version of a square G-Shock, the DW-5600E-1VC

These DW-5600E watches can nowadays be bought for less than € 80,=. I think this could very well be the best bargain around for a watch which will last forever and has a significant place in history. 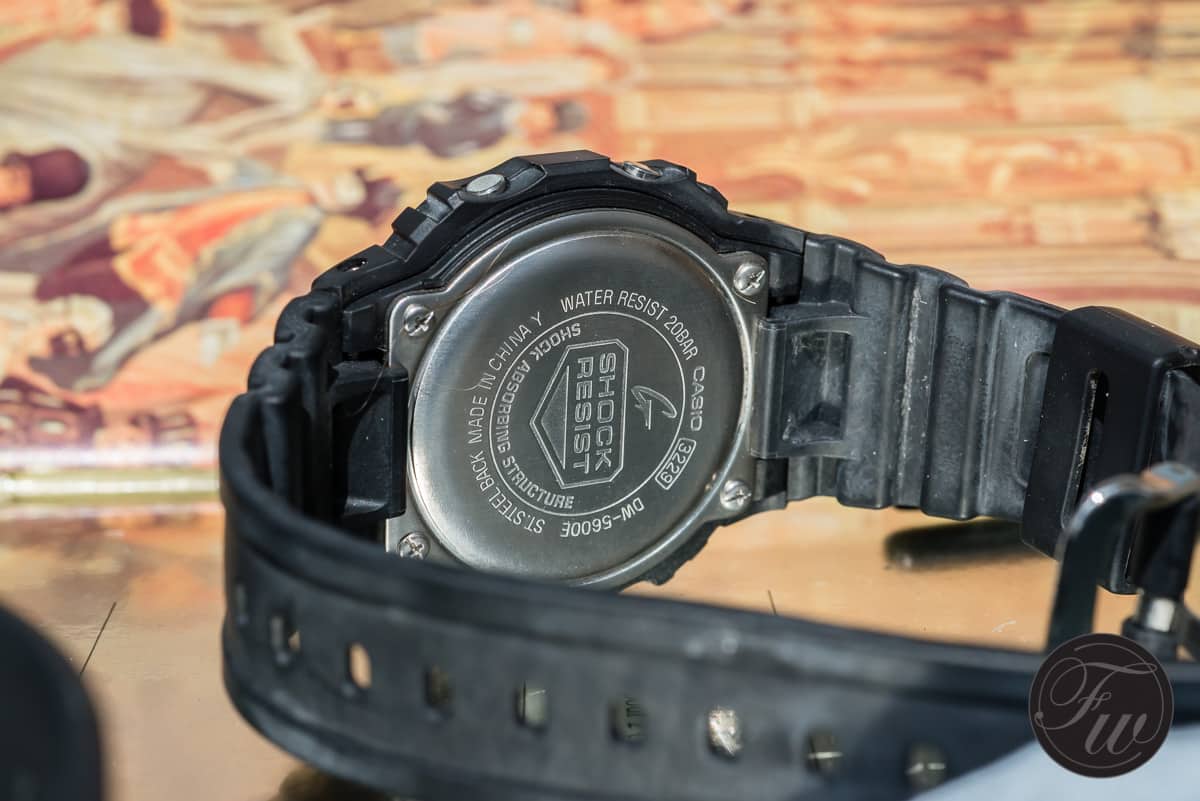 Physical development of the G-Shock Squares

But. But this doesn’t mean that Casio didn’t develop the as ‘Square’ nicked G-Shock any further. Besides all different – round, analogue, multi-sensor and even more multi-function – models which came to the G-Shock series, Casio of course developed the original Square models up to today’s standards and technology as well.

The Square models were updated in two ways. On one hand models with a solid steel inner-casing were introduced again, while using the same – more or less simple – movement modules. This means no solar powered energy supply and no radio controlled time accuracy. However it means a watch which feels much more solid and sturdy. Although I strongly doubt if in fact they are. Interesting examples of this are for instance the in 2003 and 2013 introduced 20th and 30th anniversary models DW-5000SP and DW-5030C. 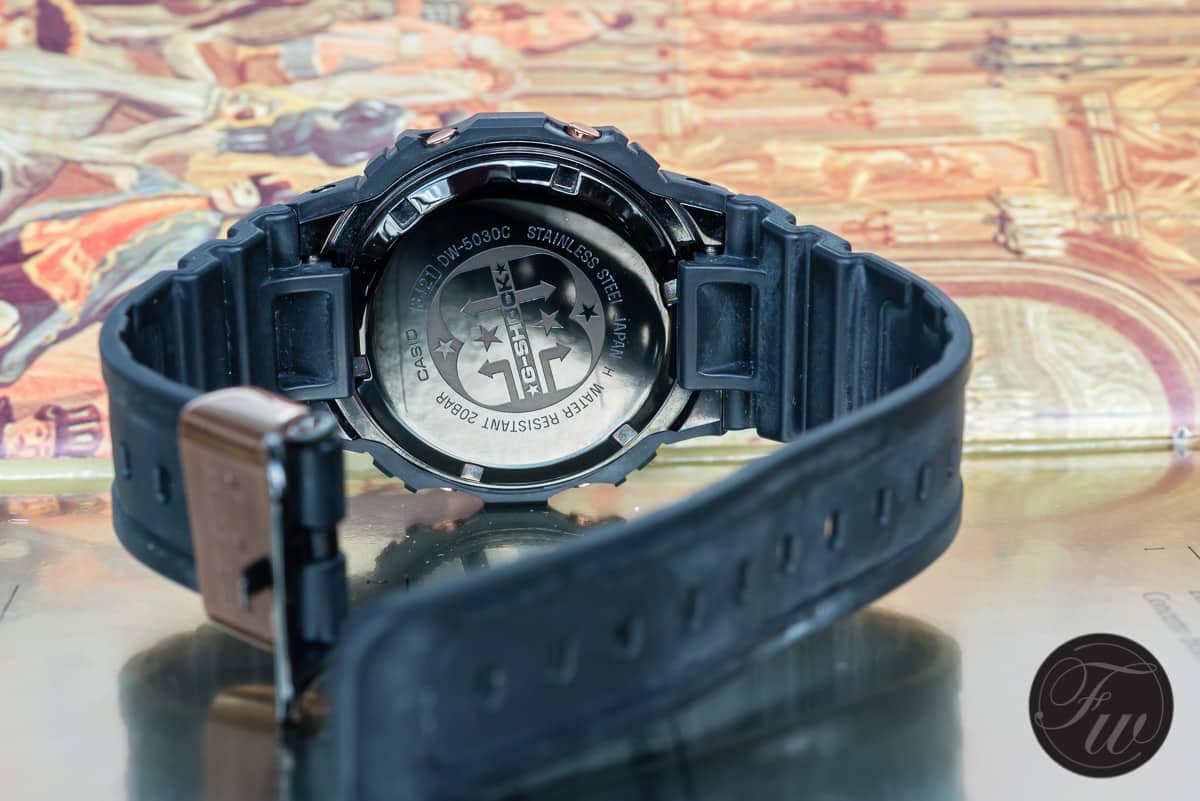 On the other hand models with more sophisticated movement modules, with for instance solar powered energy supply and radio controlled time accuracy, were introduced as well. However still with plastic inner casings. The GW-M5610 is a good example (still available and around € 130,=). This might as well be the current model with optically most resemblance to the original 1983 DW-5000C. 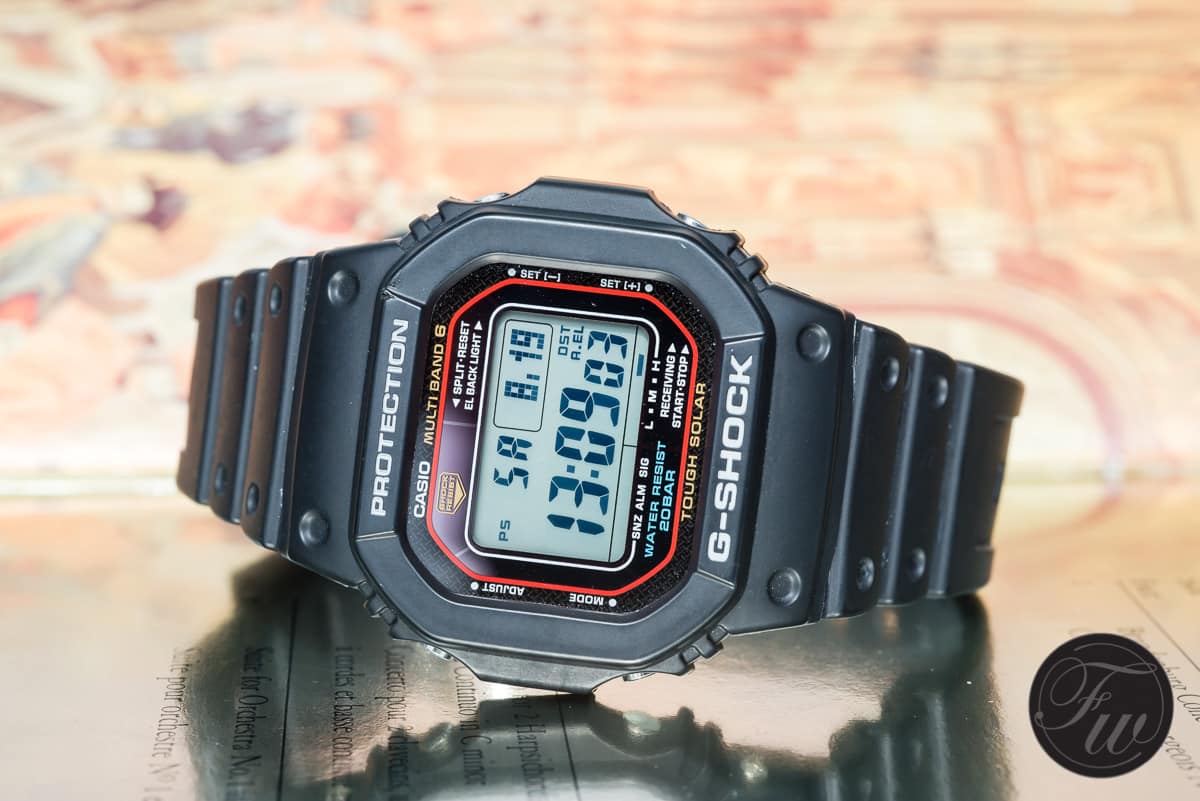 Many different variations have been supplied since. Including many special collaboration models. I’ve seen Square models with solar power without multi-band (as far as I know no multi-band models exist without solar power), models with tidal information, even models with a blue tooth connection to your smart phone. These watches are so far off the original 1983 DW-5000C that I won’t go further into them here. 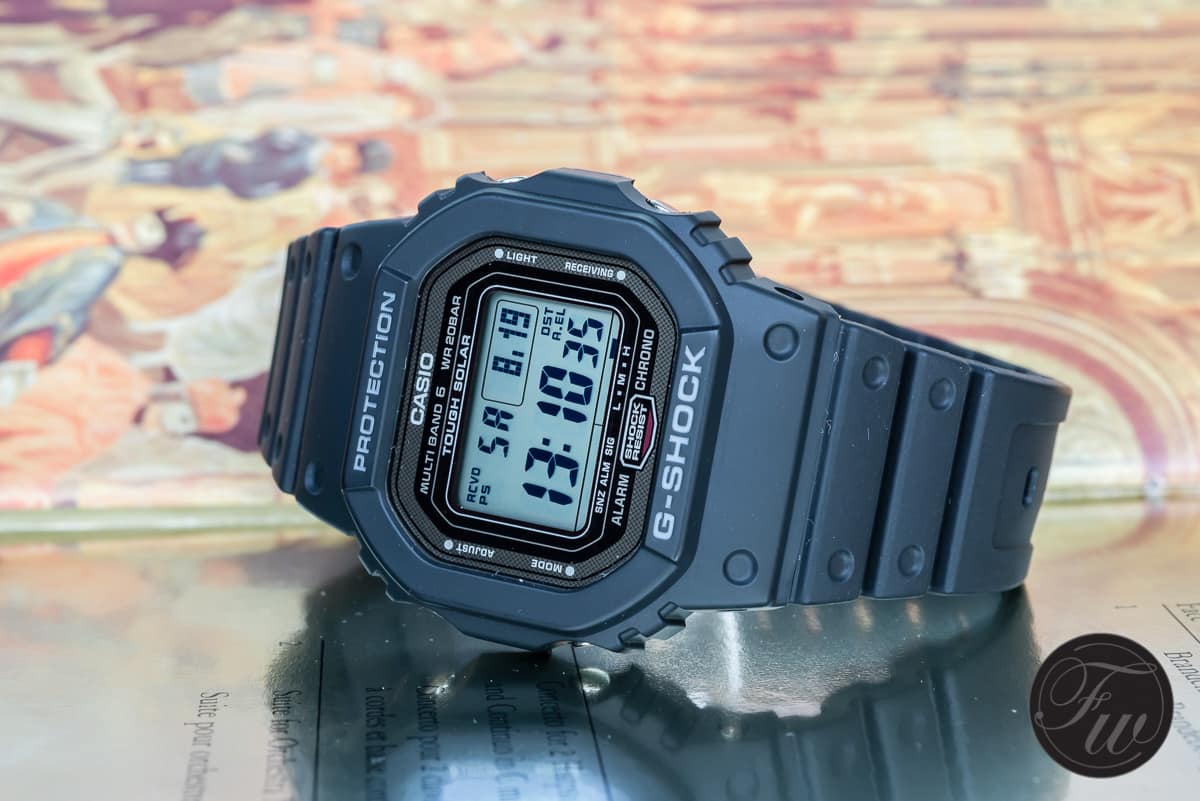 The most historically significant G-Shock in today’s G-Shock collection, the GW-5000

The best appreciation of G-Shock and its history

However! Then there’s the GW-5000. The GW-5000 today is the most historically significant G-Shock in today’s G-Shock collection. It descends directly from the original G-Shock from 1983. Which means a solid metal inner casing with a screw down case back in stainless steel with a black DLC coating. Its look is intentionally basic and its features are not the most advanced available. However it is a prestige G-Shock. It has a nicer overall finish than any other Square model and uses a softer and more comfortable poly urethane strap.

The downside is that the GW-5000 is exclusively made and sold in Japan, which partly accounts for its relatively high price (around € 365,=). Only the most observant and knowledgeable G-Shock enthusiasts will recognize this watch. It won’t get you instant status with the general public. Owning the GW-5000 however is one of the best ways to express your appreciation of G-Shock and its history.

Last but not least a special G-Shock, the GW-S5600

There’s one quite special Square G-Shock model which I do want to mention here. It’s the GW-S5600. Although sporting the same solar powered and multi band regulated module as the GW-5000, the GW-S5600 has no solid metal inner casing. 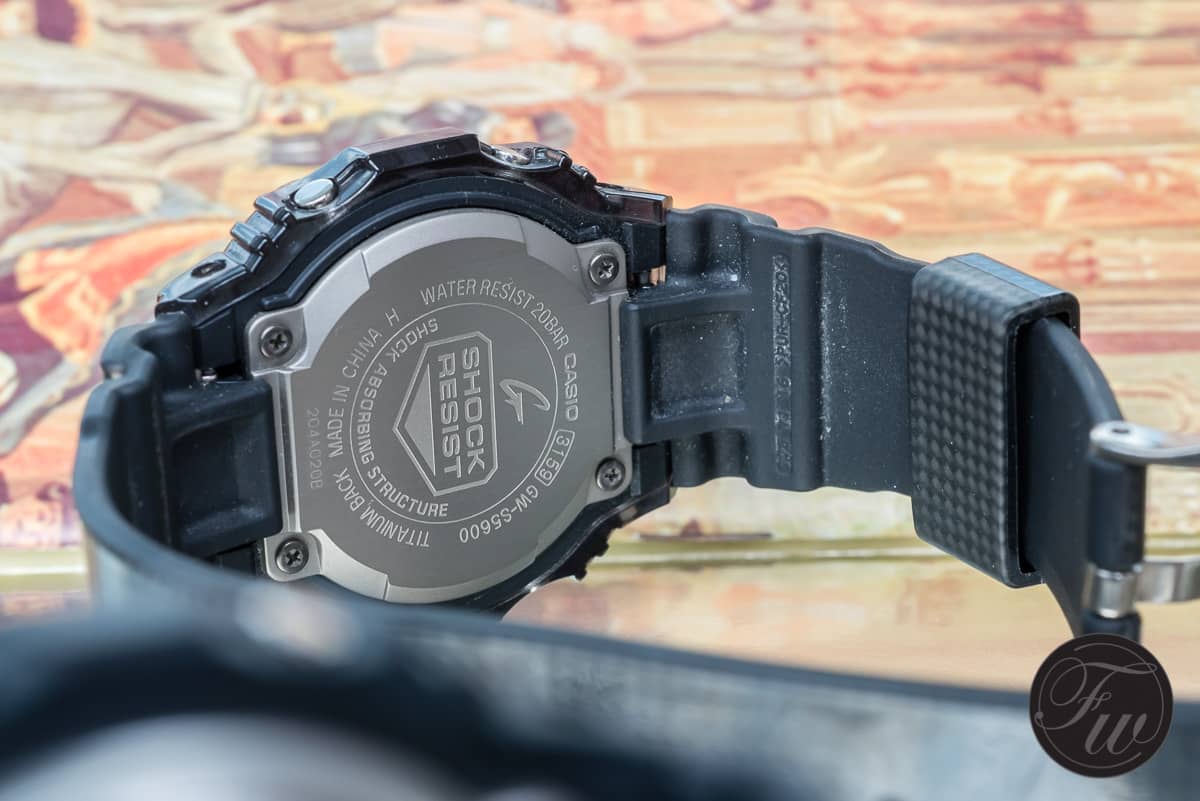 However, Casio chose to use quite exotic materials to have this watch stand out and to give it specific qualities. Special for this model are the carbon reinforced strap and slightly transparent black casing. The strap probably being a reaction from Casio to ever more often heard rumours that the standard straps are known for easy breaking. And secondly, probably to keep the weight of the watch as low as possible and to give it a more sophisticated feel when wearing, its case back is made of titanium. Unfortunately this model as well is available for the Japanese market only where it sets you back € 290,=.