Whenever the conversation turns towards G-Shock, there is one of the Fratello family I turn to before all others. The aptly named “G2”, the “Godfather of G” always has a sharp insight or cutting comment ready to greet new releases. Unsurprisingly, therefore, I consulted with G2 when the question of exactly what I would do with a G-Shock should I have the opportunity to design one with Casio on behalf of Fratello was raised. As it turned out, G2’s suggestion landed remarkably close to a plan Casio had been working on itself for several months. When we first saw the new, Casio G-Shock MRG-B5000D-1DR, we realized exactly how close our prescient sage had actually been…

This isn’t the first, second, or even third time this has happened to one of the Fratello team. Dave, on more than one occasion, has been thrilled/annoyed to find that his early drafts for limited editions trod firmly on the toes of projects already conceived by the brands in question. It has happened to me too. RJ, also, has felt that odd sting of pride and disappointment. Whenever it happens to one of us, I remind the guys that it’s a good thing. It means our fingers are on the pulse. It means we’re seeing the industry in the same way brands do. That doesn’t necessarily help with the disappointment of dropping a dream project, but it is the reality. 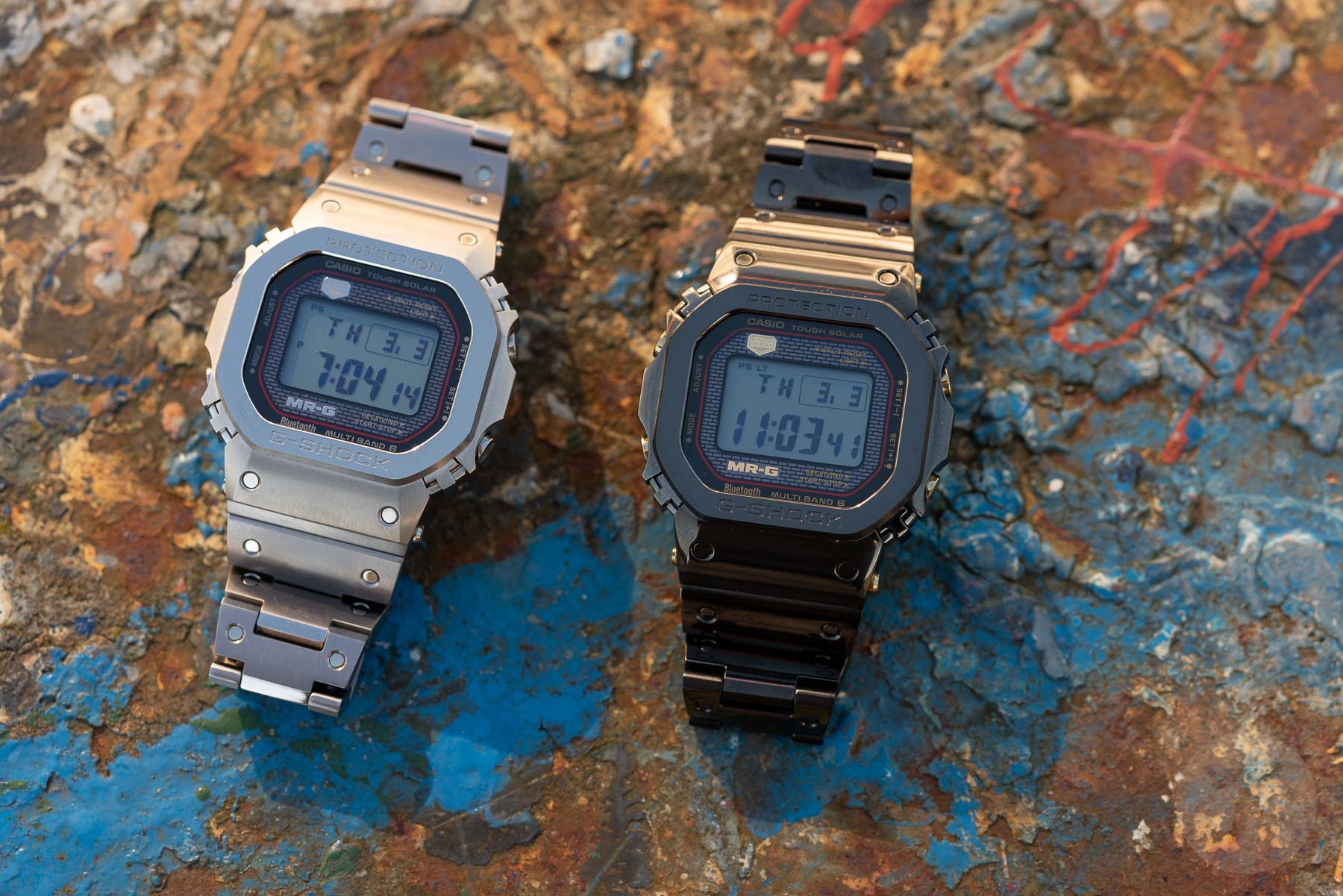 And talking of reality, the Casio G-Shock MRG-B5000D-1DR (that’s the uncoated one right here) is even better in real life than I imagined it could be when G2 first described its almost exact corollary to me all those months ago. On paper, this seems like a bonkers concept. We’d discussed its rank insanity at length when we were considering pitching it to Casio ourselves. However, we, like Casio (obviously) eventually came down on the same opinion: mad as it is, it is truly brilliant. 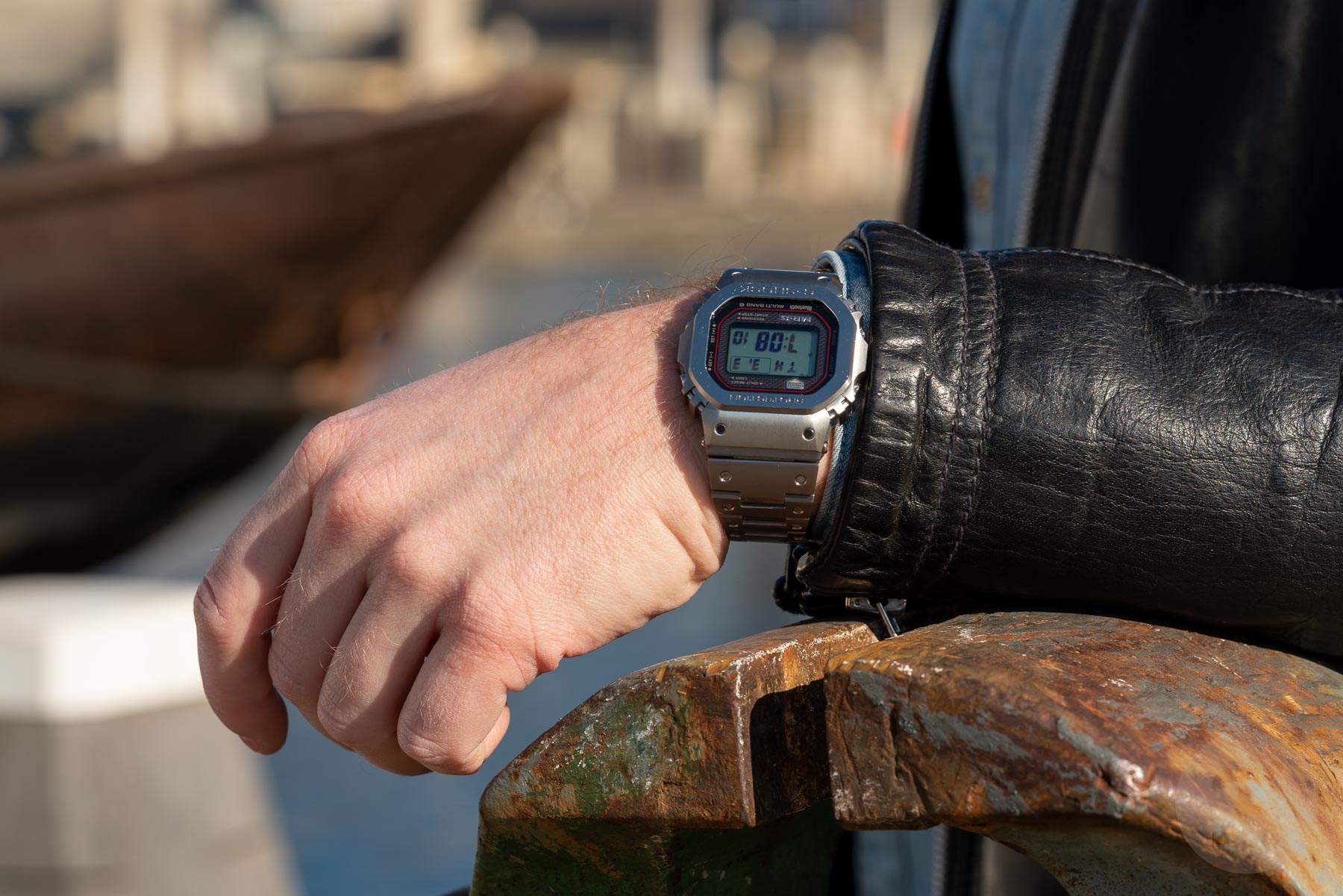 We love Casio G-Shock watches, that much is clear. But why? That is the key question. In order to validate this project in our minds, we had to decouple the terms “good value for money” and “cheap”. The two aren’t necessarily the same thing. However, when it comes to Casio, the former is used as a polite way of saying the latter. 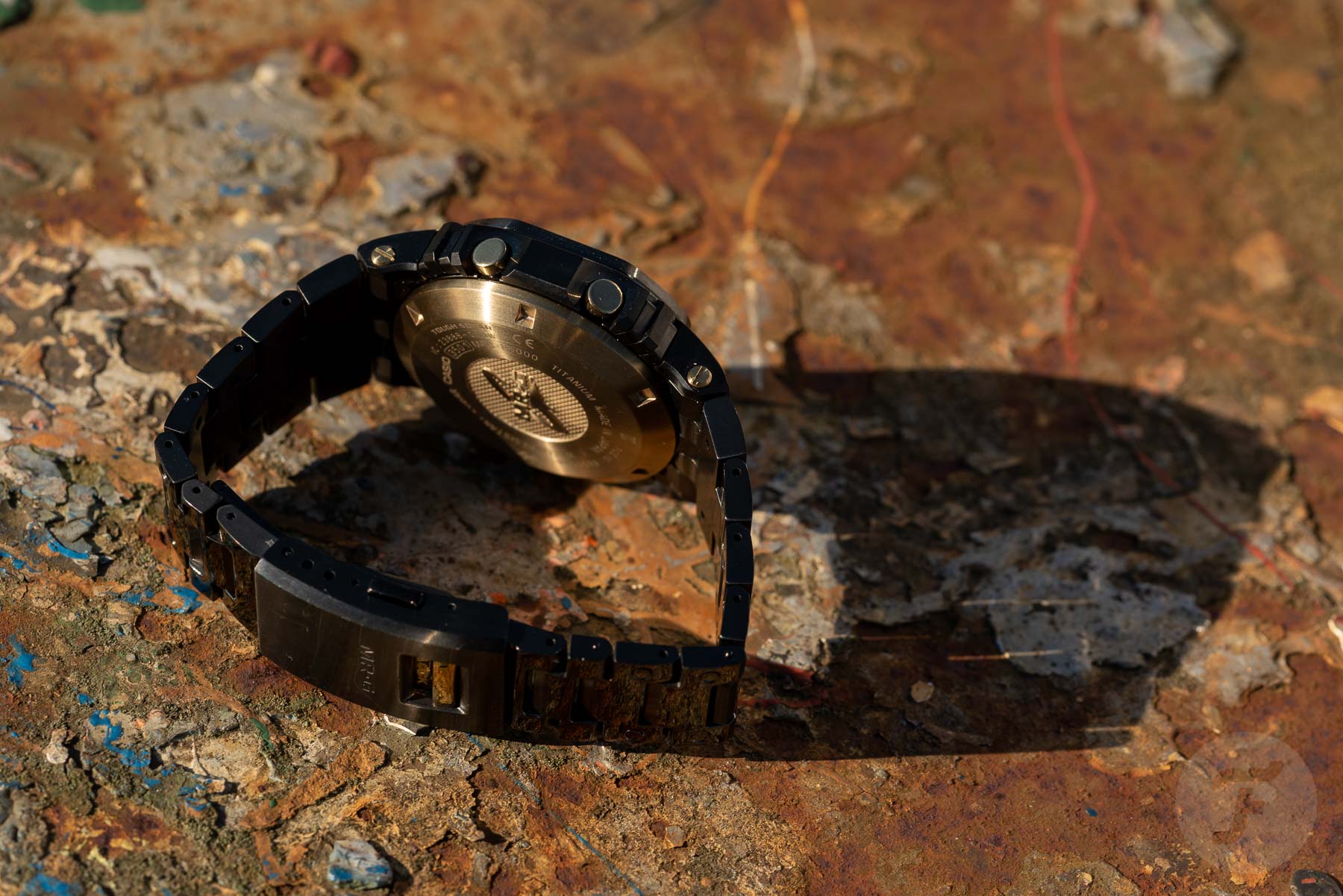 When you ask someone what they like about Casio G-Shock, the common answer is something along the lines of, “the brand makes an extremely functional and identifiable product that, thanks to it being uncompromisingly over-engineered, is able to deliver all I need and more for a reasonable price.” 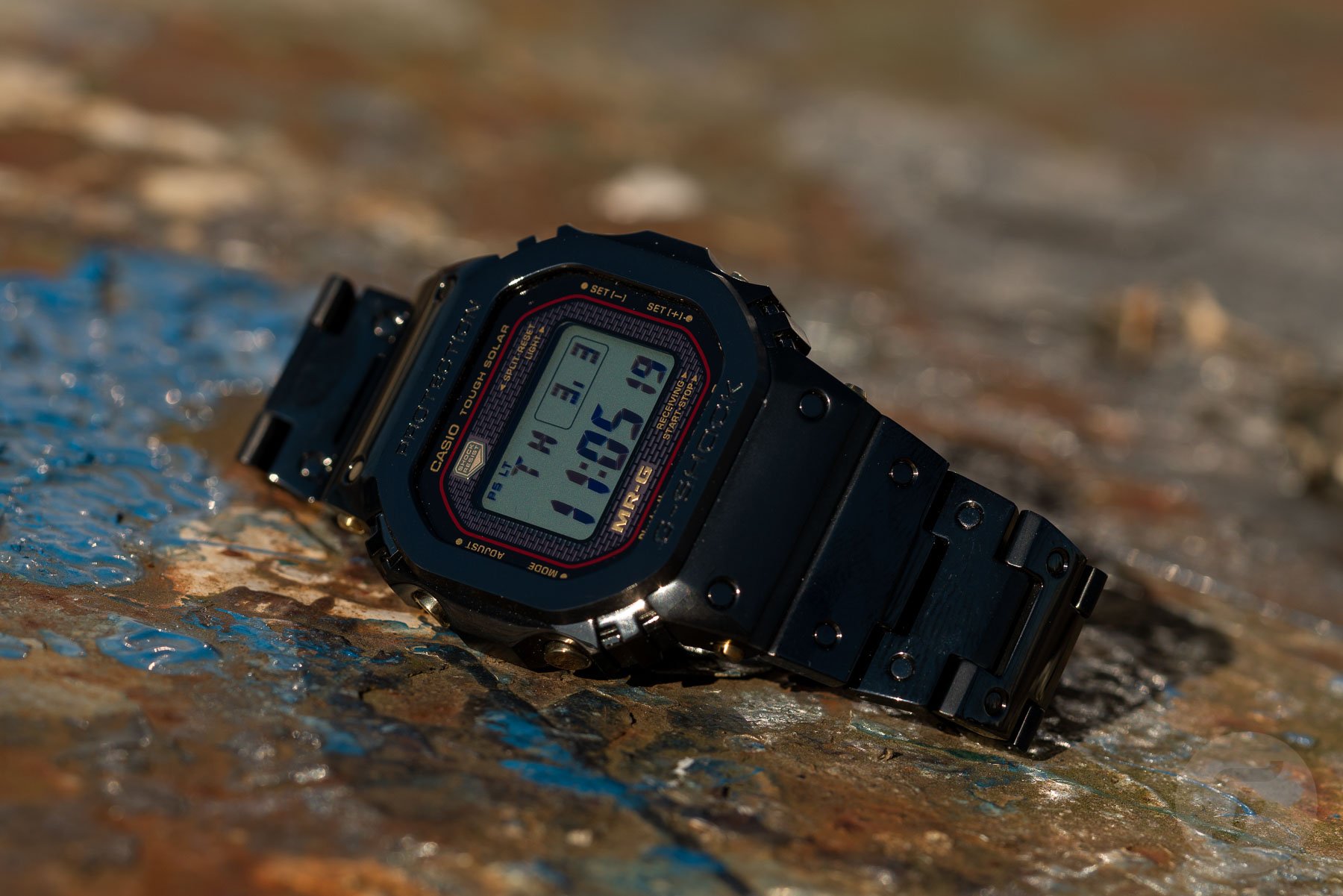 What is good value?

In this context, “reasonably priced” is synonymous with “good value”. It doesn’t make an absolute statement about the price. Even though “cheap” and “expensive” are also relative terms literally speaking, they are somewhat more qualifiable than “good value” or “reasonably priced”. This is true. Casio G-Shocks are notoriously good value. In terms of reliability, functionality, and immediately identifiable aesthetics, it would be fair to say they are few watches that represent better value on the market. However, extremely expensive items can also be of good value. Take the Bugatti Veyron, for example. Bugatti sells that car at a loss. Why? Simply to prove it can make something that awesome and that what it wants more than a profit is for people to actually drive the thing. What the Casio G-Shock is known for, is being “cheap”. 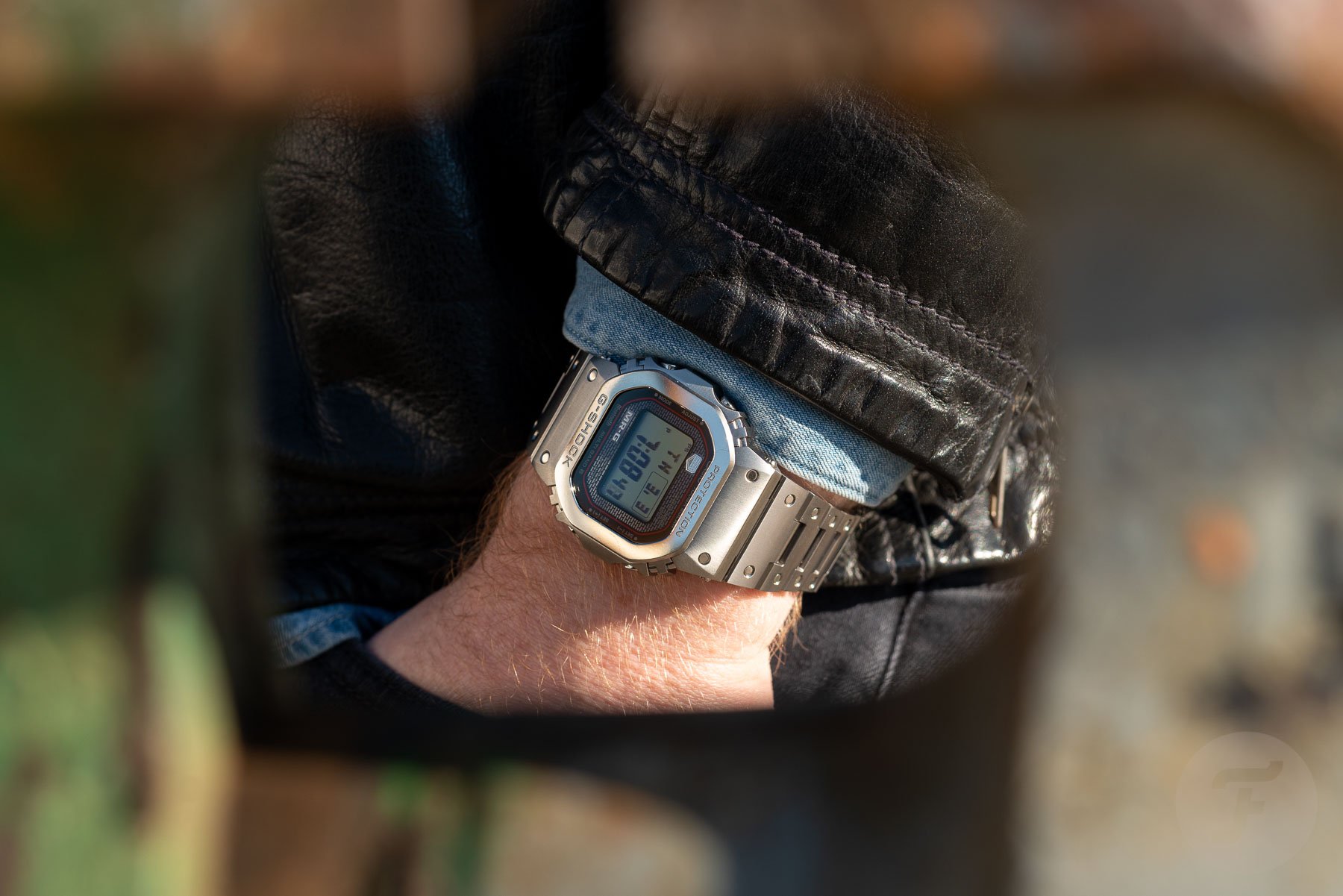 That’s not to say it is cheaply made. The original models do exactly what they promise to do. Molded resin is not as expensive as machined steel. But Casio chose it for the right reasons (to do a particular job) and has formed the material to exacting standards. Regardless, it simply costs less than worked metal. Thus, for many decades now, consumers have held an unwavering expectation of what a G-Shock “should” cost. 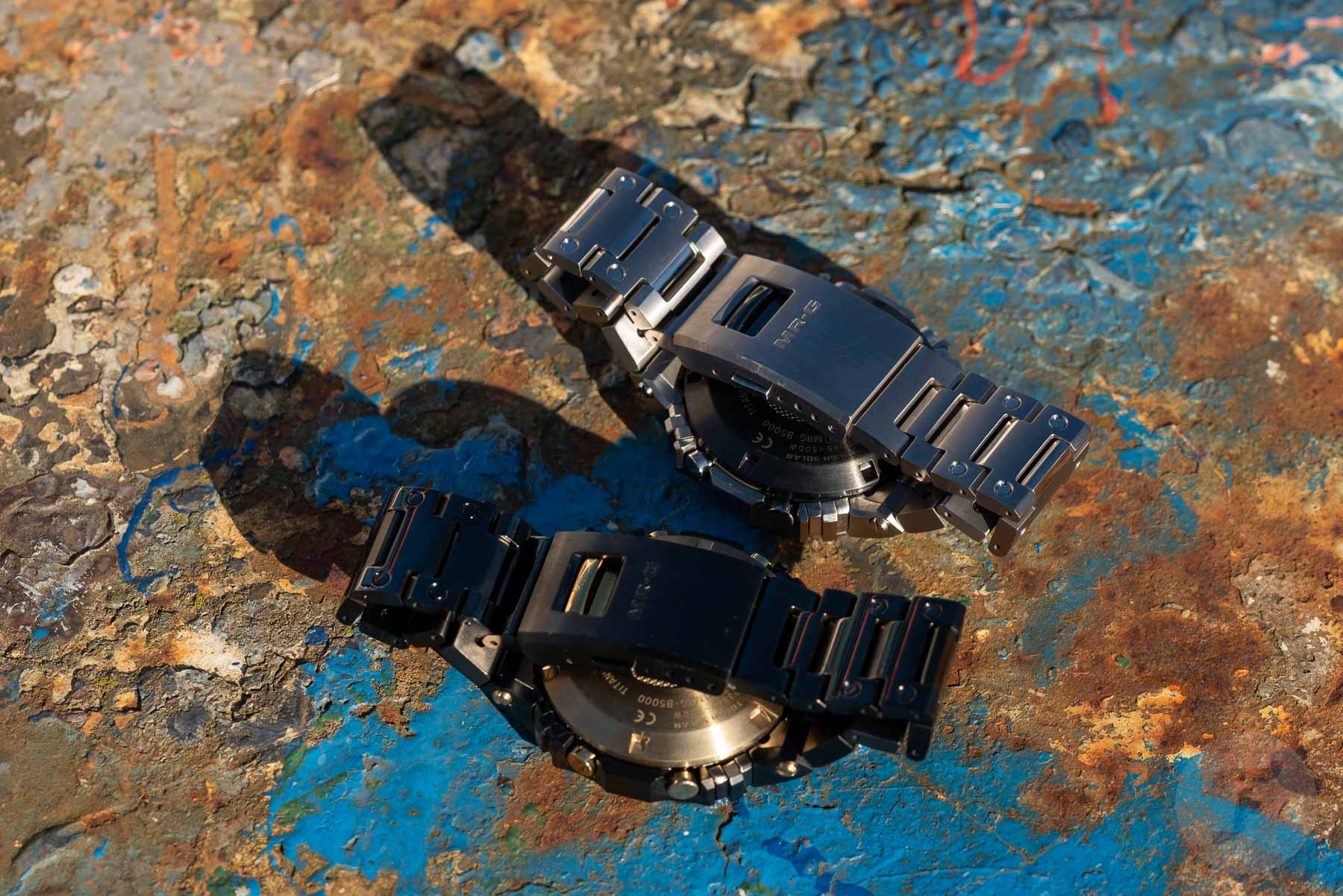 Along comes the Casio G-Shock MRG-B5000 range and all hell breaks loose. The notion of spending literally twenty times as much as the price of a regular resin square is jarring. So jarring to some people, in fact, they can’t even get past the initial shock to consider the prospect of how different a product this actually is. I mean, let’s face it: it must be sufficiently different from the regular models for Casio to consider charging what the brand is charging. It isn’t like Casio has a reputation for scattershot pricing as it is, so what is it that makes these models so much more expensive than the source material? 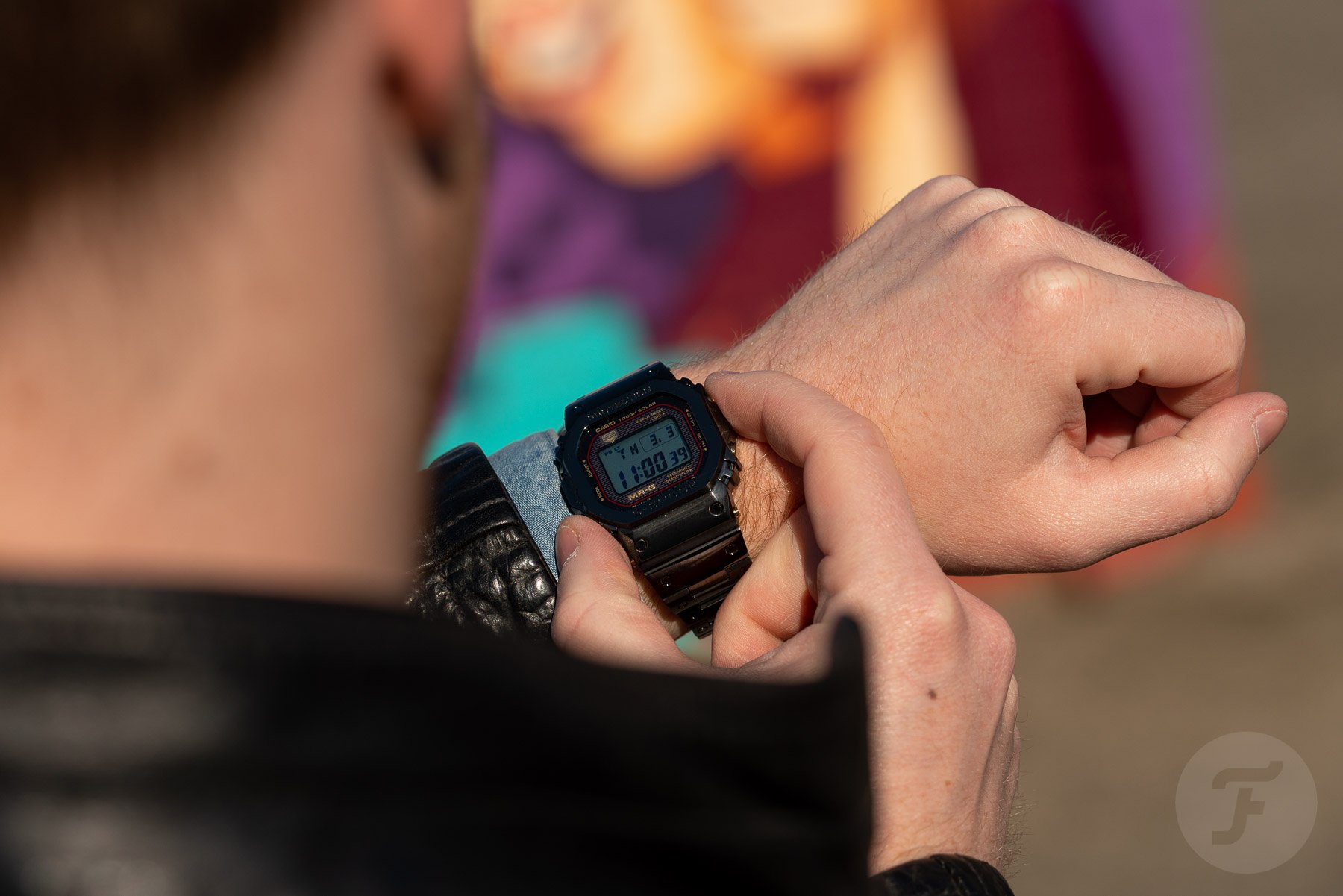 These MR-G models are titanium. That much we knew. However, what is less common knowledge is that they’re actually TranTixxii titanium, with bezels in a Cobarion metal alloy (roughly four times harder than pure titanium). We’ve seen this kind of alloy before. In fact, our very own Lex Stolk had it on his wrist not so long ago, when he reviewed the MRG-B2000BS-3A Hana-Basara Edition. 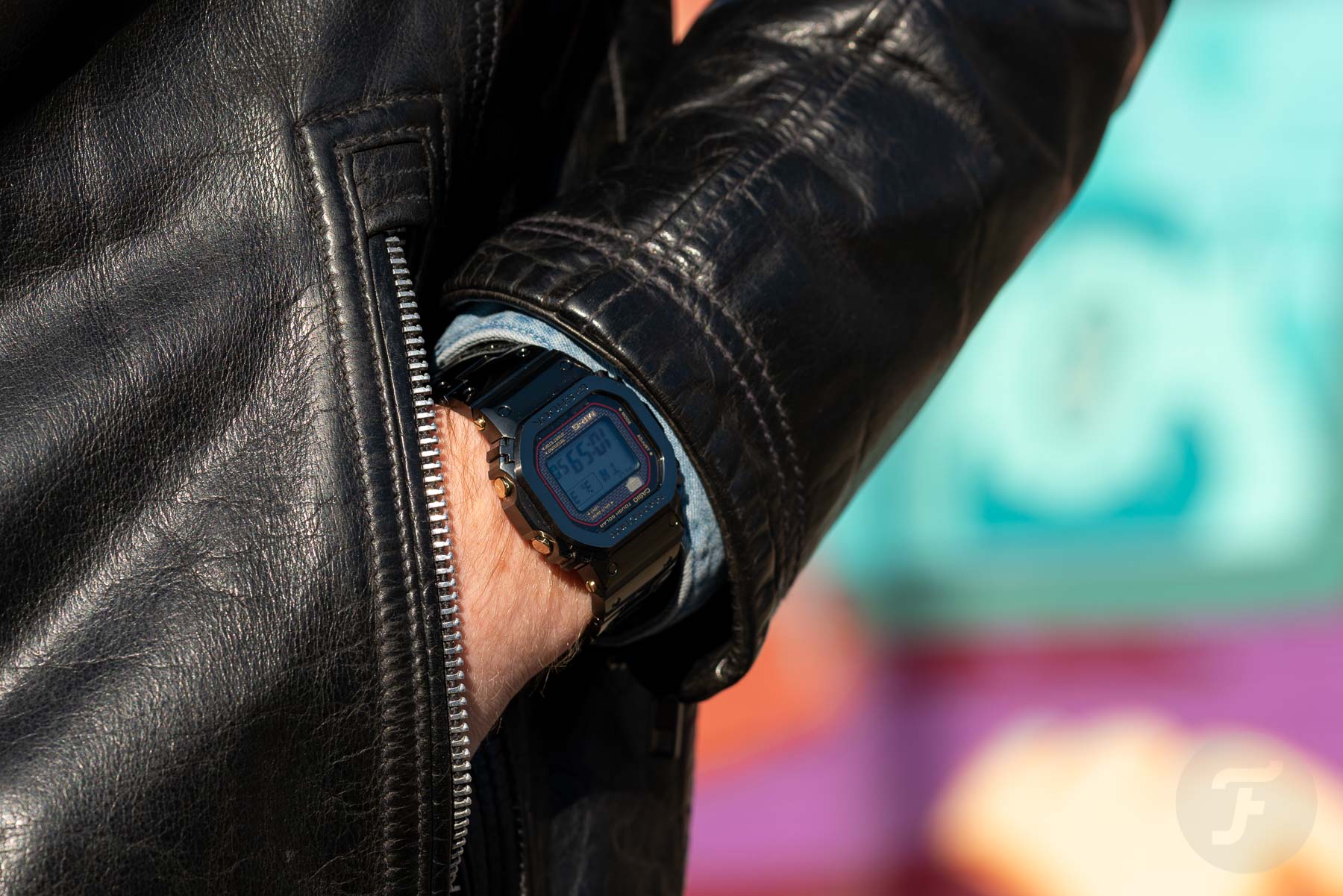 But it isn’t just the materials that make a difference. No, the case construction is different too. While the resin squares feature a single-piece external case, both of the MR-G models discussed here use a multi-piece bezel construction. Is that something Casio built into the line for this model specifically? Or did the brand decide to do so with one eye on the future (and the customization options it could offer)? Those are questions I can’t answer yet! 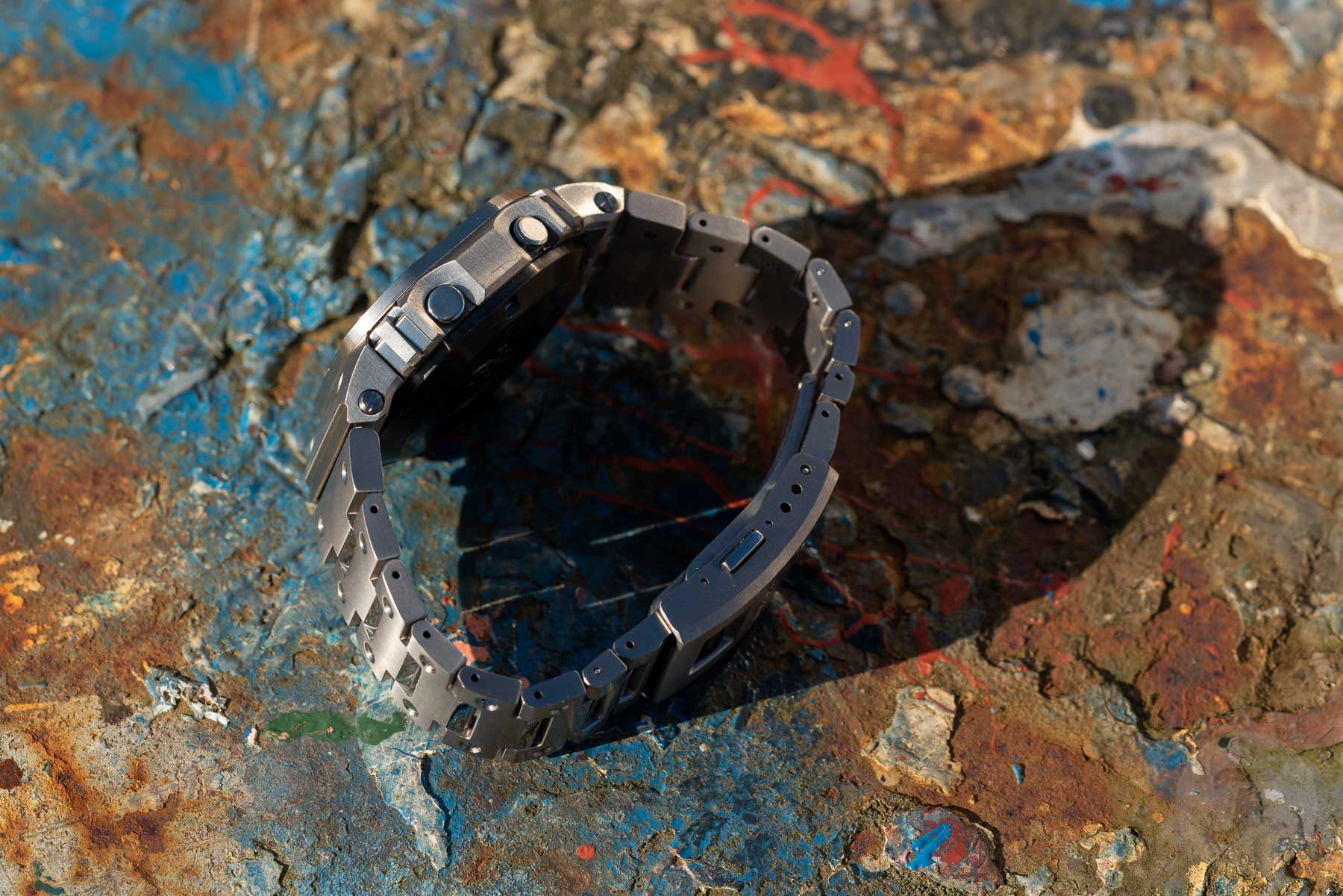 Additionally (and unsurprisingly), these models utilize sapphire crystals as opposed to the mineral crystals we’d expect to find on lower-end models. The water resistance is also a solid 200 meters. 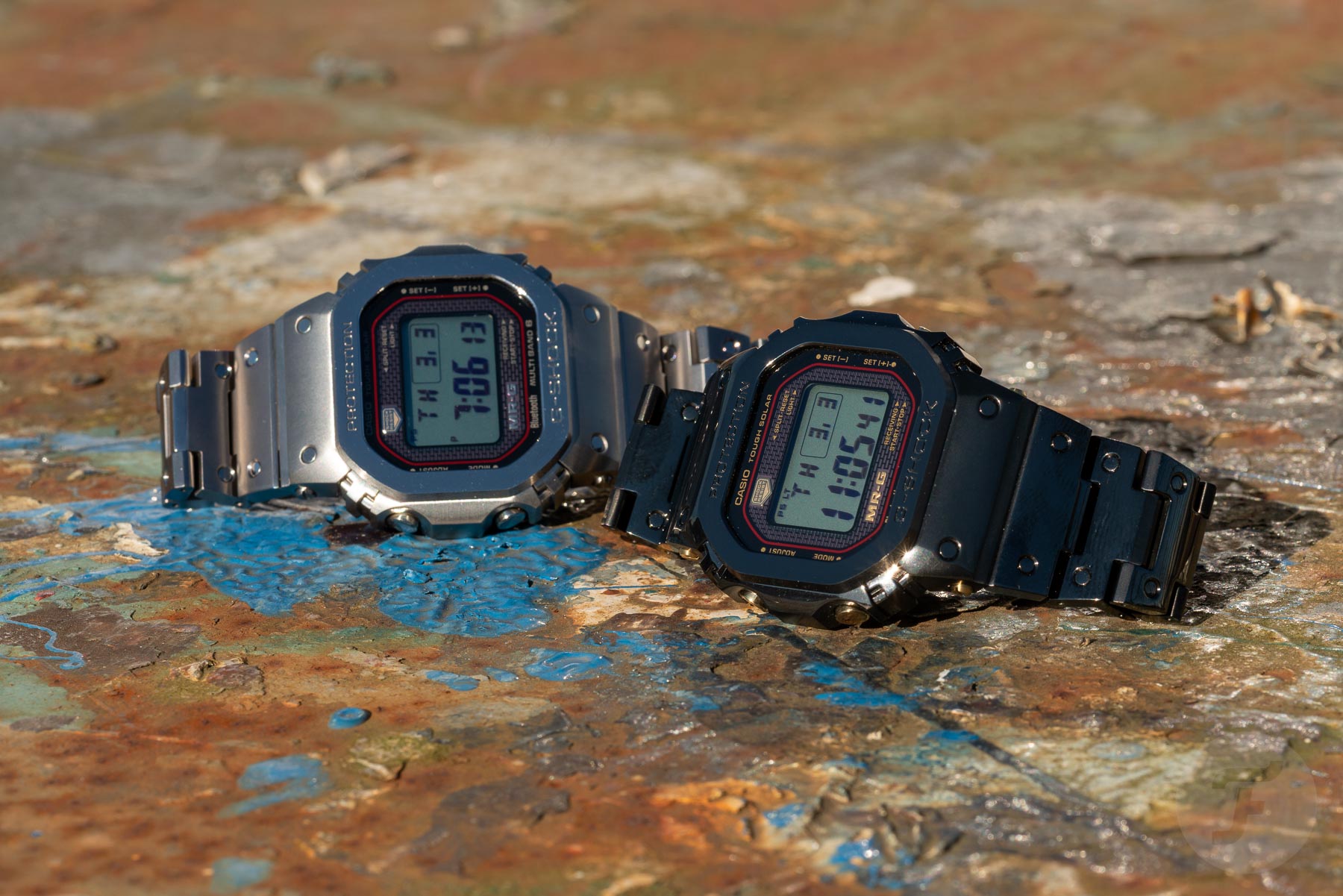 To the dark side or to the light?

This release sees two new metal (crucially, titanium) watches join the Casio catalog. First, there’s the MRG-B5000B-1DR, which is the black model. The MRG-B5000D-1DR is also available, which is an uncoated version, boasting a brushed/polished surface. That choice of surface finishing of the MRG-B5000D-1DR is the only significant difference between the real version and the Fratello limited edition that G2 conceived. In our initial drafts, we had an entirely blasted surface. That would have placed the model somewhere between these two in terms of color. 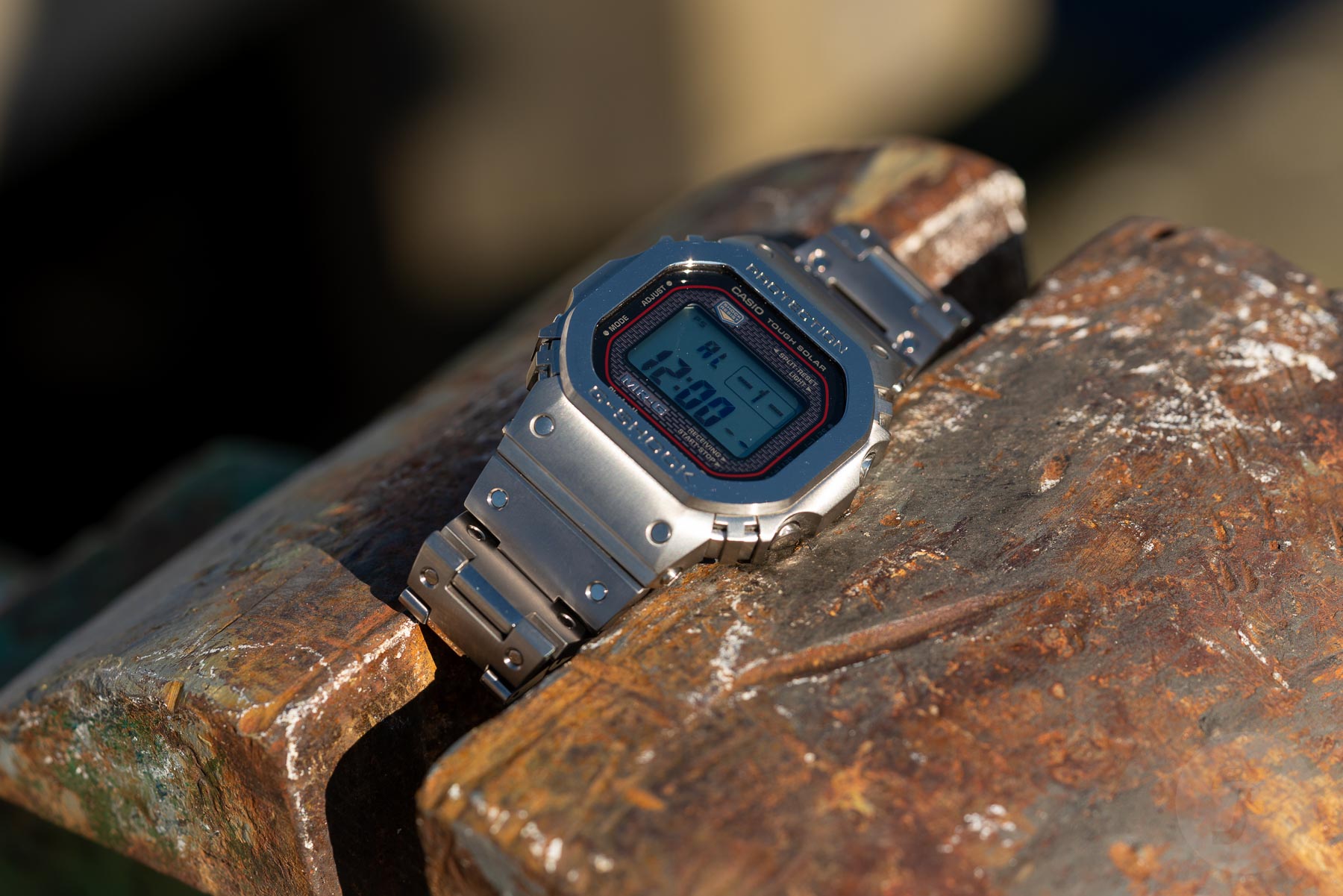 Other subtle differences, for fellow daydreamers, were the absence of the MR-G text on the dial and the use of our signature orange (RAL 2005) instead of red for the accents. Who knows? Maybe one day we’ll see this Dutch delight. Until then, we have the MRG-B5000B-1DR and the MRG-B5000D-1DR to drool over.

Which one would you pick? Personally, I think I’d go for the MRG-B5000B-1DR simply because the silver-colored case makes more of a clear visual distinction between these premium models and the budget-friendly resin versions. There is, however, an awful lot to be said for the subtleness of the black model. There is a significant price difference between the two: the black model retails for €4,000 and the MRG-B5000B-1DR for €500 cheaper at €3,500. Learn more about Casio here.