Our bi-weekly feature where we select three interesting watches from the Catawiki auctions. This article is a partnership with Catawiki, but we made our own selection of watches and without any interference in our write-up. For this week, we have a Longines Conquest Olympic Games 1972 (Munich) edition, a vintage Grand Seiko 5646-7010 and a Jaeger-LeCoultre Reverso Night & Day.

As always, let me start by saying that before you bid on a watch, you should have done your homework. Especially when it concerns vintage watches. Some brands can help you identifying them, but most of the time it might take some more effort. From this week’s brands for example, Longines is known to have a great museum and archive that can help you to authenticate a watch. For vintage Grand Seiko, you’ll find a lot of information on websites like the Seiko & Citizen Watch Forum. The Jaeger-LeCoultre in this week’s selection is from 2002 and requires little home work. All necessary paperwork was included in the lot.

The selection I will show you here, are recently sold items. Yes sold. The thing is, the turnover on Catawiki of auction items is so quick, it leaves us with little time to do a proper write-up. So I show you some watches that I liked of the previous auctions, which might inspire you to look for the same or similar watches. Each watch gets a bit of description, which I hope helps you in making the right decisions.

The vintage Grand Seiko reference 5646-7010 from 1973 is an interesting example. Most of the time, you need to put some effort in validating if parts are original. One of the most common mistakes is that the hands have been replaced by the wrong ones. A search for similar models will definitely help you identifying parts.  The Longines is a small chronograph, but its association with the Olympic Games of 1972 (the Munich one, which is unfortunately very famous for the kidnap and murder of athletes from Israel) makes it a very interesting piece. The Jaeger-LeCoultre Reverso Night & Day is just an impressive watch with a lot happening on the dial. Although I love the Reverso, being a design icon for sure, it is not my cup of tea on the wrist simply because of the fact that it is rectangular. It is in this week’s selection anyway, as it is a very handsome watch and there are a lot of people who admire the Reverso.

Without further ado, let’s have a look at the three watches. 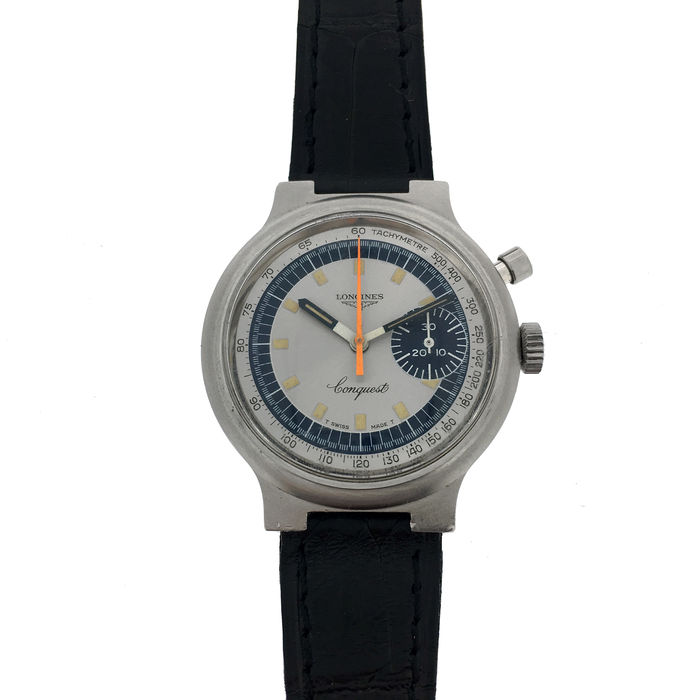 Both the dial and the caseback are very interesting. Let’s start with the caseback first: it has “Official Timer At The Olympic Games” engraved. The black lacquer is partly disappeared, but it is still perfectly readable. You will also find the Munich 1972 inscription on there. Strangely enough, Longines decided to engrave the serial number partly on the medallion. Looks very sloppy, but I guess they had a different sense for aesthetics in those days. Inside this 36.5mm stainless steel chronograph, you’ll find a Valjoux caliber 236, dubbed Longines caliber 334 movement.

The face of the watch is beautiful. A silver sun burst dial with large yellow hour markers, a blue chronograph seconds track and a bright orange hand. The chrono minute counter can be found at 3 o’clock in a blue sub dial. The chronograph is operated with just one button, located at 1:30. This watch fetched €1250 excluding the buyer’s premium. A very interesting chronograph, especially interesting for those who collection Olympic Games related watches or items. Longines was the official time keeper and these games have quite a historical significance. The Olympic Village in Munich is still there and is now an interesting place that used to be cheap housing, but starts to become more ‘hip’. You will also find the Allianz Arena and the BMW museum and factory in that area. The Munich public U-bahn (subway) transport, also dates back to 1972. If you are going to visit Munich, make sure to visit the Olympiadorf (Olympisches Dorf) area and it would be nice if you’re accompanied by a watch similar to this Longines Olympic Games chrono. 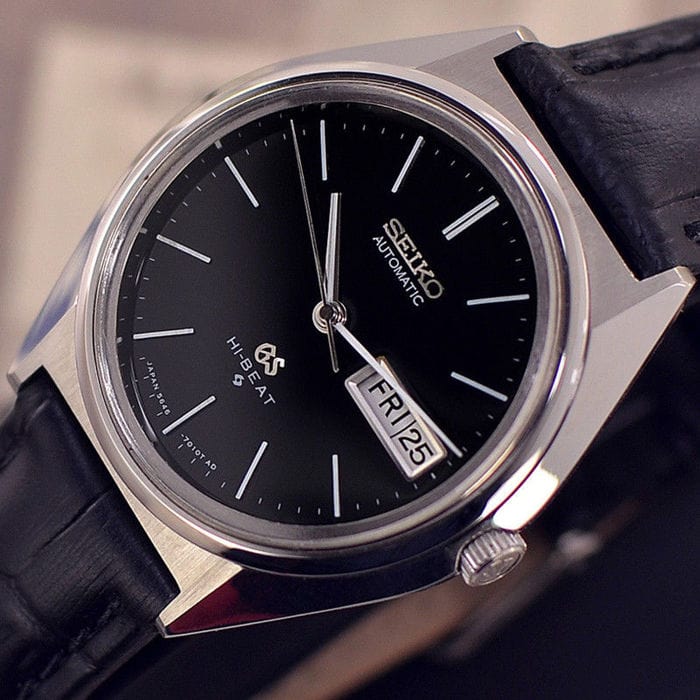 It is no secret that we have a lot of love for Grand Seiko here on Fratello, including the vintage models. We are of the opinion that these watches, although being relatively small, offer a lot of bang for the buck. A King Seiko can even be found for less money, while the quality is on par with the Grand Seiko watches of that time. Anyway, if you aren’t familiar with vintage Grand Seiko, it is definitely worth investigating. The first part of the reference number, 5646(A), refers to the movement of this Grand Seiko. A self-winding hi-beat movement, from a time where 28.800vph was also being regarded as a high-beat movement. Today, we use the definition high-beat for movements that have a 36.000vph ticking number.

Anyway, the second part of the reference number often refers to a certain model. However, -7010 was also used for the Tuna from 1975 (6159-7010) so it doesn’t always add up. On the back side of the watch, you will find the GS medallion and a serial number. The first digit of the serial number indicates the production year and the second digit stands for the month. In this case, the watch dates back to January 1973. The hands on this GS model, as discussed in the introduction of this article, seems to be original and so are the dial and crown. The case design is awesome in my opinion and still has its sharp edges with these beautiful polished and brushed surfaces. This watch fetched €999 and that’s actually a no-brainer for those who would love to own a Grand Seiko. For me, Grand Seikos of this era are super underrated. If you can live with the relative small case size, go for one of these. 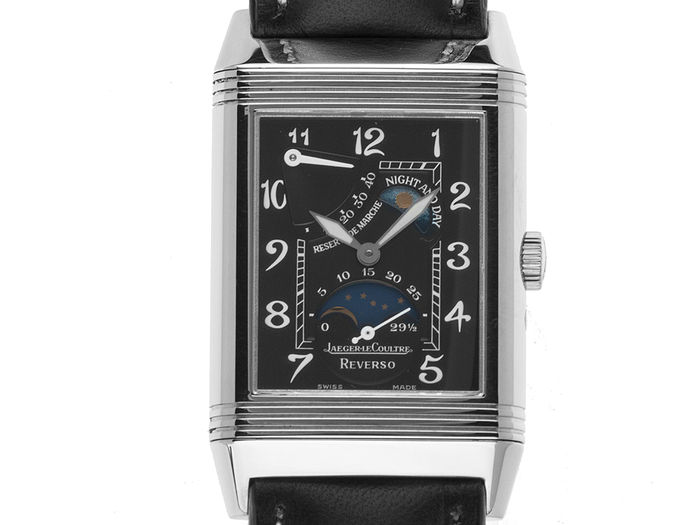 This watch didn’t come cheap at the time. It has a 18 carat white gold case and a couple of interesting complications. It has a night and day indicator, a power reserve indicator but also a breathtaking moon phases indicator at 6 o’clock. This watch doesn’t have a ‘duo face’, as JLC calls this, but a sapphire caseback that enables you to have a look at the stunning hand-wound caliber 823 movement. As you can see, this movement was designed for the Reverso. A rectangular shaped movement. You will often find ’round’ mechanical movements in rectangular watches, which I really dislike (especially when these watches have a hefty price tag), so Jaeger-LeCoultre does it right for sure. The white printed Arabic numerals in an interesting typography contrasts very nicely with the deep black dial. A very readable dial, despite being relatively cluttered due to all the complications on there.

This watch sold for €8500, excluding premium, which isn’t very expensive for a white gold Jaeger-LeCoultre Reverso with these complications. It was sold complete with all boxes and the appropriate paperwork.

You might also like to visit Catawiki’s auctions of Breitling watches, Cartier watches, Omega watches, and other exclusive men’s watches.