Whether it is a funny shape, like the Zenith El Primero Big Blue with its TV Screen case. Or a household watch brand’s unusual model, such as Tissot’s Wood- and Stone watches. Not to mention a low-key looking timepiece concealing an awesome movement, as any Junghans chrono from the ‘50s with their amazing J88 movement. What if all 3 comes in one watch? In a timepiece that is from a household name from the industry. A chronograph perhaps, with a legendary movement. To top it off in a weird rectangular case. Well, I know at least one such watch, albeit I’m sure there are many out there. Better yet, I have this watch in my collection and I’m happy to talk about it. It’s the Certina Argonaut chronograph first execution from the end of the 1960s with a Valjoux 23 inside. 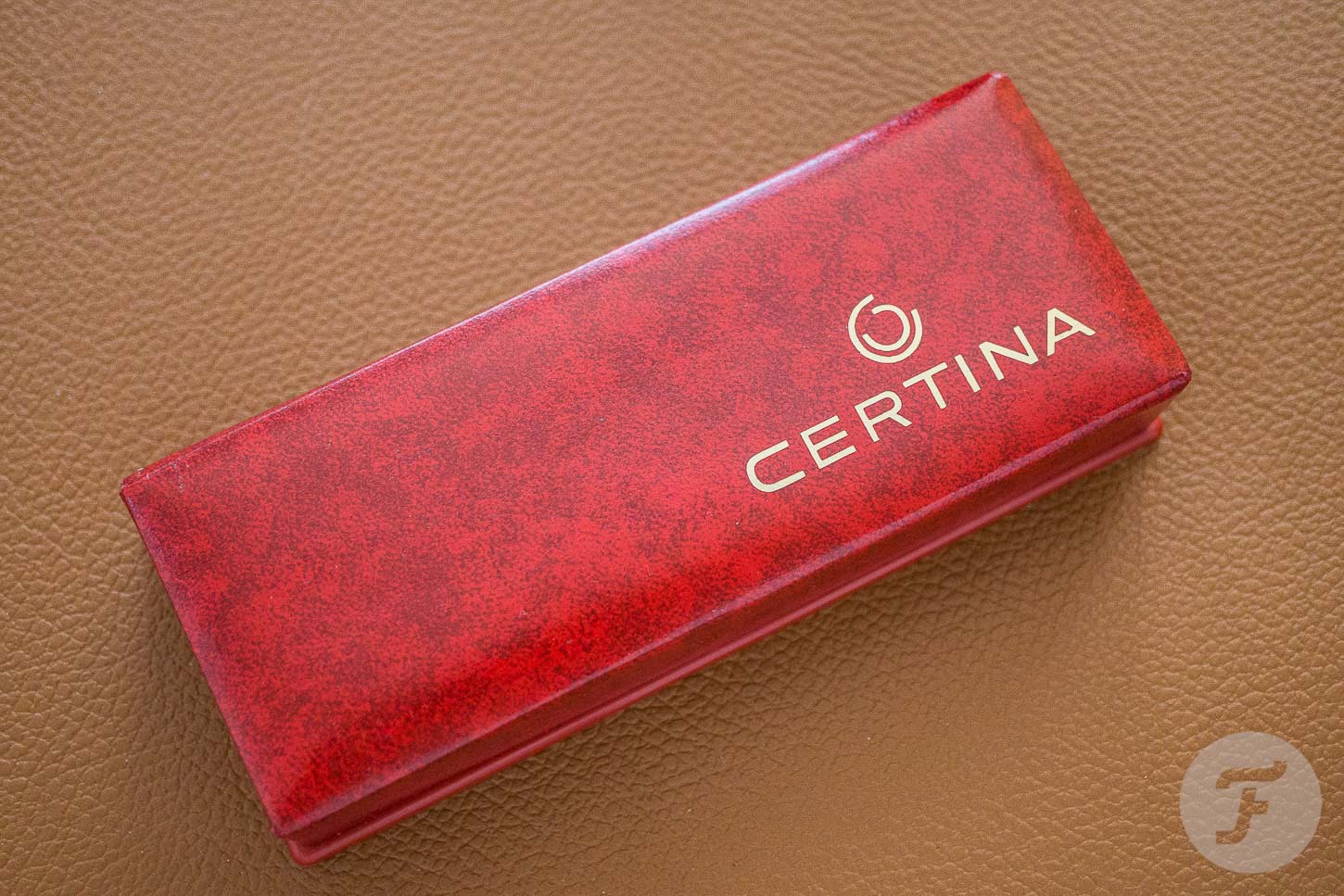 A small package does not mean the content cannot be grand

The Argonaut line consists of a bunch of different models from simple time-only watches to chronographs with Valjoux 72 inside them. As this article is about the Certina Argonaut chronograph I will focus on these instead of giving you a rundown on the whole model family. If we wanted to categorize them, we would need to distinguish between 2 sub-dial and 3 sub-dial versions. The 2 sub-dial models had Valjoux 23 – or its derivative like the 236 – inside them. While the 3 sub-dial models had the iconic Valjoux 72(6) as their “engine”. Argonauts also came out in either black or white dials for either movement variations. The dials were a panda and reverse panda (white dial, black subdials and vice versa) though there was also a black dial only version by the name of Certina Argonaut 200m. As the name suggests it was watertight up to 200 meters. 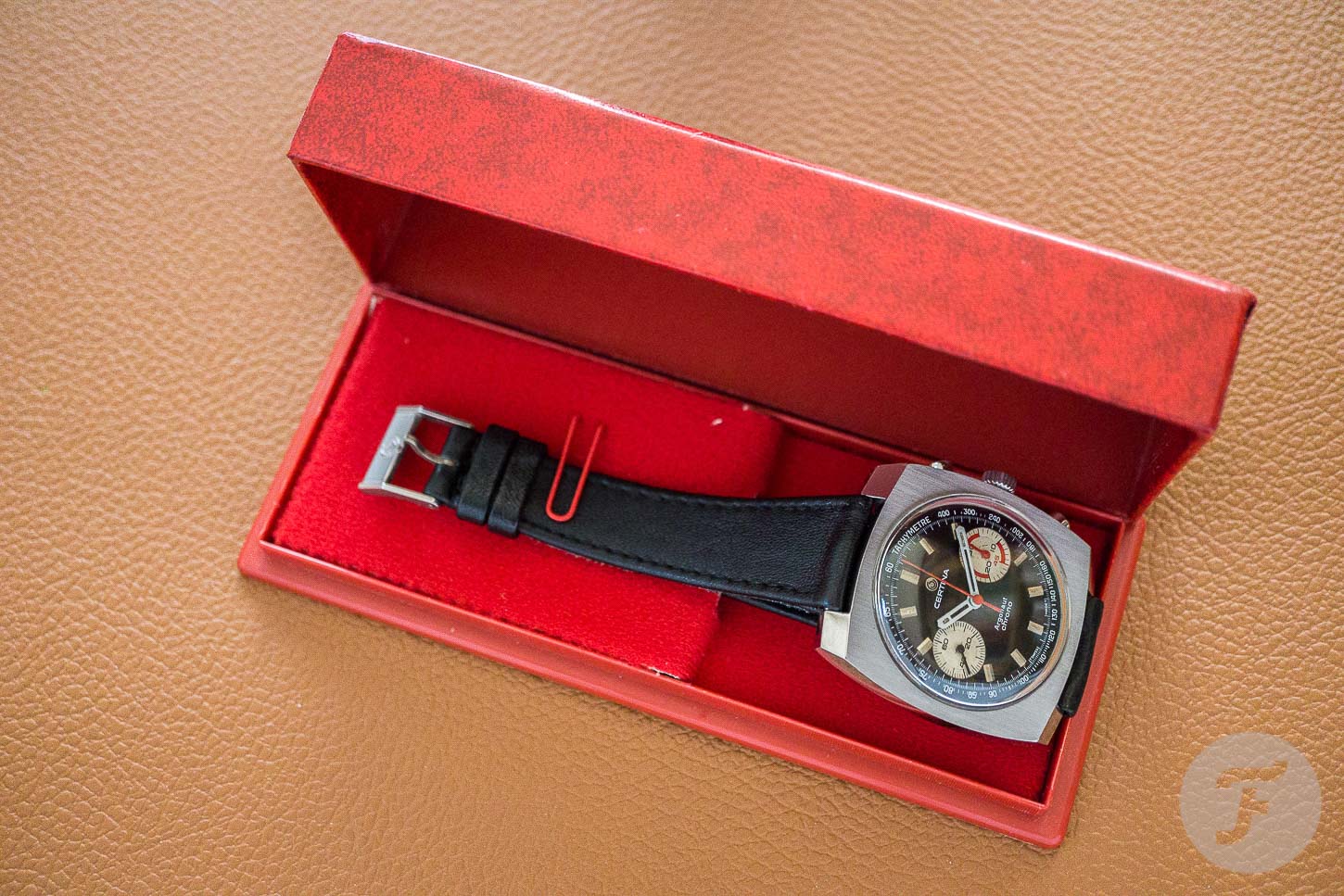 To sum it up; Certina Argonaut chronos were either black dials with white subdials or white dials with black subs. There were 2 or 3 subdials, based on what movement was inside them. Then there was this one model which was black only, the 200m. It’s interesting to understand the look of the watch since the reference numbers really made no sense. It all started with the reference 8401 001 (like my watch) and a Valjoux 23 inside. Certina’s name for the 23; caliber 29-053. Later models that had the improved Valjoux 236 movements (Certina 29 063) bore the reference 8401 501. The 200m’s ref was 8401 002. All of these models had one derivative of Valjoux 23. Argonaut chronograph watches with Valjoux 726 had reference numbers starting with 8501. The 2 different versions were; 8501 001 and 8501 501. Easy to understand, right? Wrong. It’s a mess. 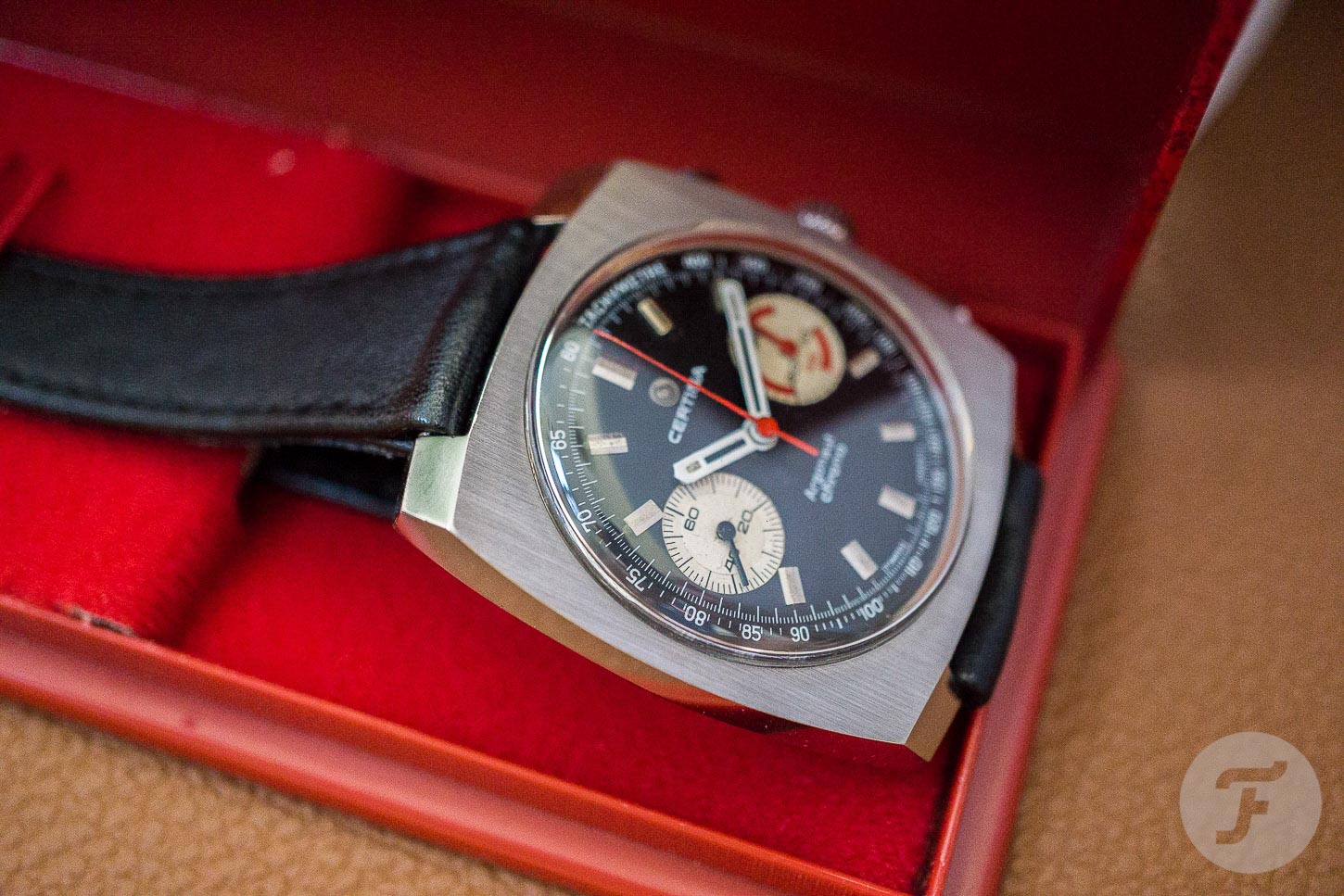 Now that we know the basics let’s look at the watch that I acquired a while ago. It is the Certina Argonaut chronograph reference 8401 001. You can find this number on the outside case back, just above the serial number. It has a case shape that is a mix between rectangular and cushion where the lugs are actually continuances of the case rather than anything else. The Argonaut measures 41.9mm from lug tip to lug tip, the width is 38,6mm not including the crown.  By these numbers, you can see that the Certina Argonaut chronograph is not particularly large watch, yet it wears great and a bit larger than its size. The as the dial is round you have large flat metal surfaces around it, with vertical brushing. The rest of the case is polished from the end of the lugs to the side and the case back. 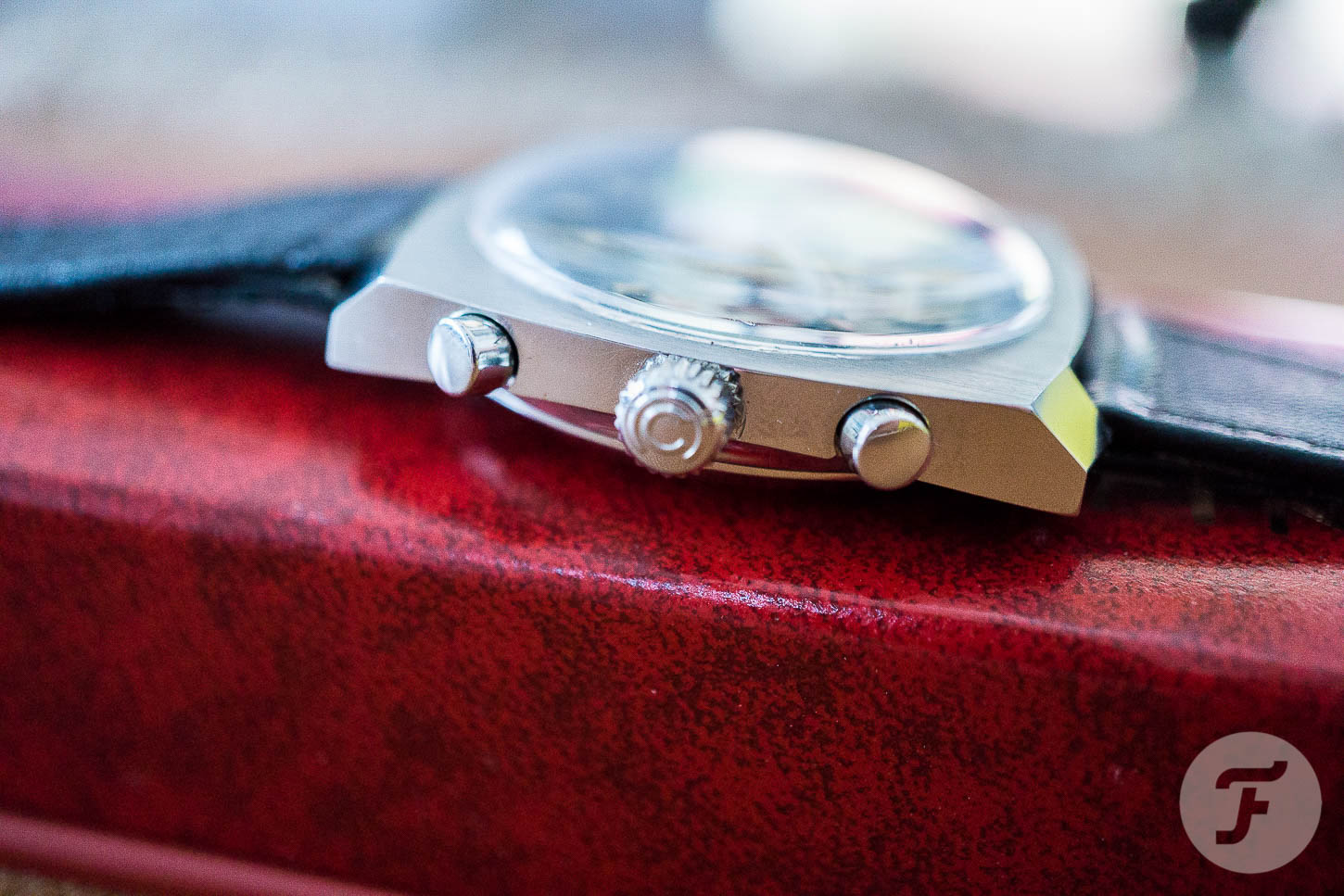 Speaking of which, the case back is screw-in and, as I said contains the reference and the serial numbers. The reference is above, the serial below (I removed the last digits from the photos). We are talking about a 7-digit serial, that dates the Argonaut to 1968, which was the first year they came out. Argonaut chronos had a rather short run despite a large number of watches you can still find today. Certina made them between 1968 and 1972 or so. Based on this analogy 7.5million serial numbers and higher are from 1969, 8million is 1970 and so on. While the serial would give you the rough production year, the reference can tell you the actual watch specification. First 2 digits refer to the caliber, the second 2 are the case material, the last 3 are the model number. Meaning 84 (Certina 29-053, 29-063) 01(stainless steel) 001(model number). 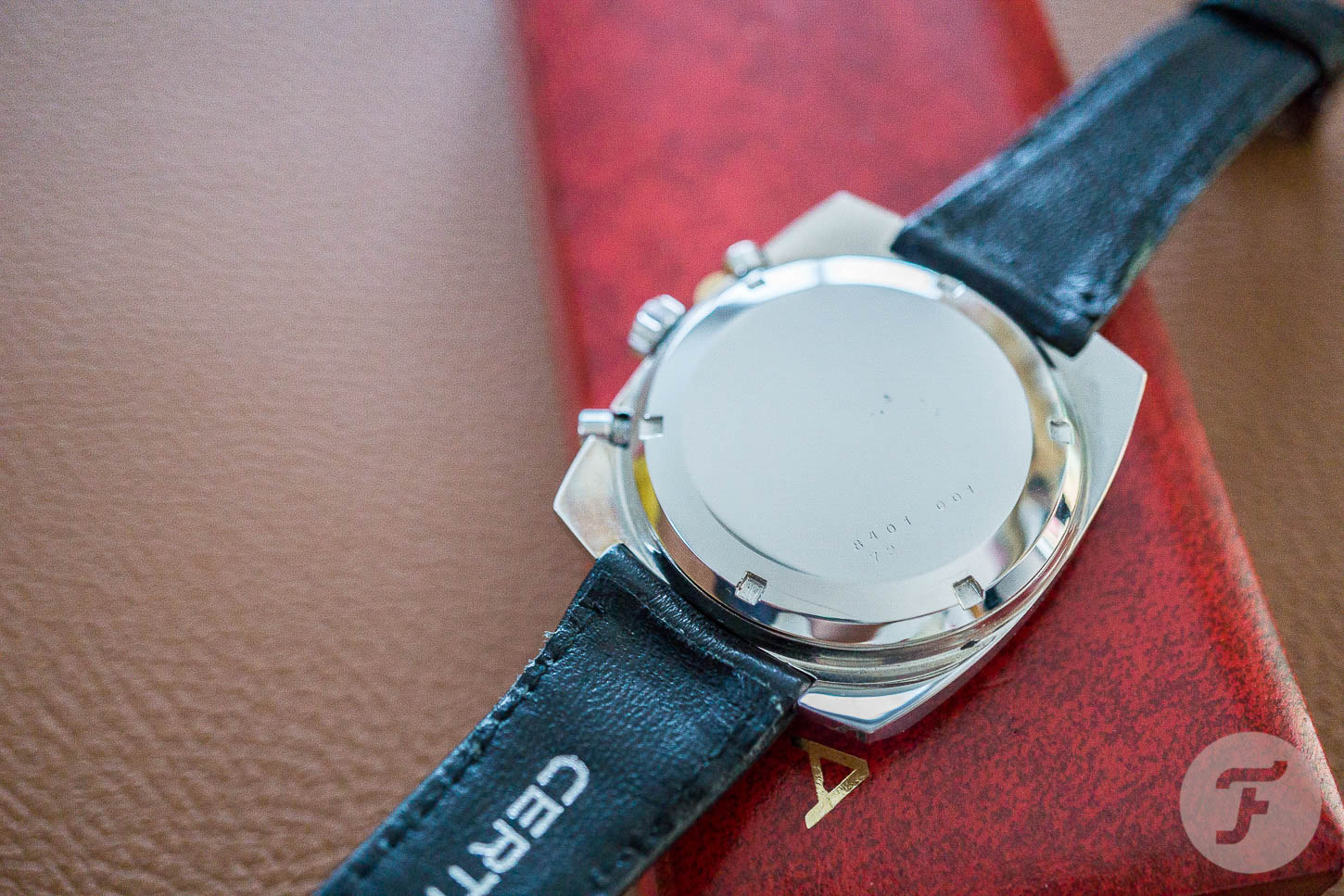 I talked a lot about the various dial variations before, so I do not go into that again. Instead, let’s look at the dial in detail. The Certina Argonaut chronograph dials are pretty playful with a lot of little details and colors. On mine, the base color is black for the dial and the tachymeter scale, painted on the outside. On the while dial versions it’s black and on later black dial versions (8401 501) it’s white, giving a contract to the whole watch. The indexes are steel and applied, the rest of the dial is painted. At 3 o’clock you can find a white subdial with little red details. That’s for the 30-minute counter. At 9 o’clock you can see another white subdial. That is the continues seconds hand. the chrono center hand is red, the large white stick hands have Tritium on them. 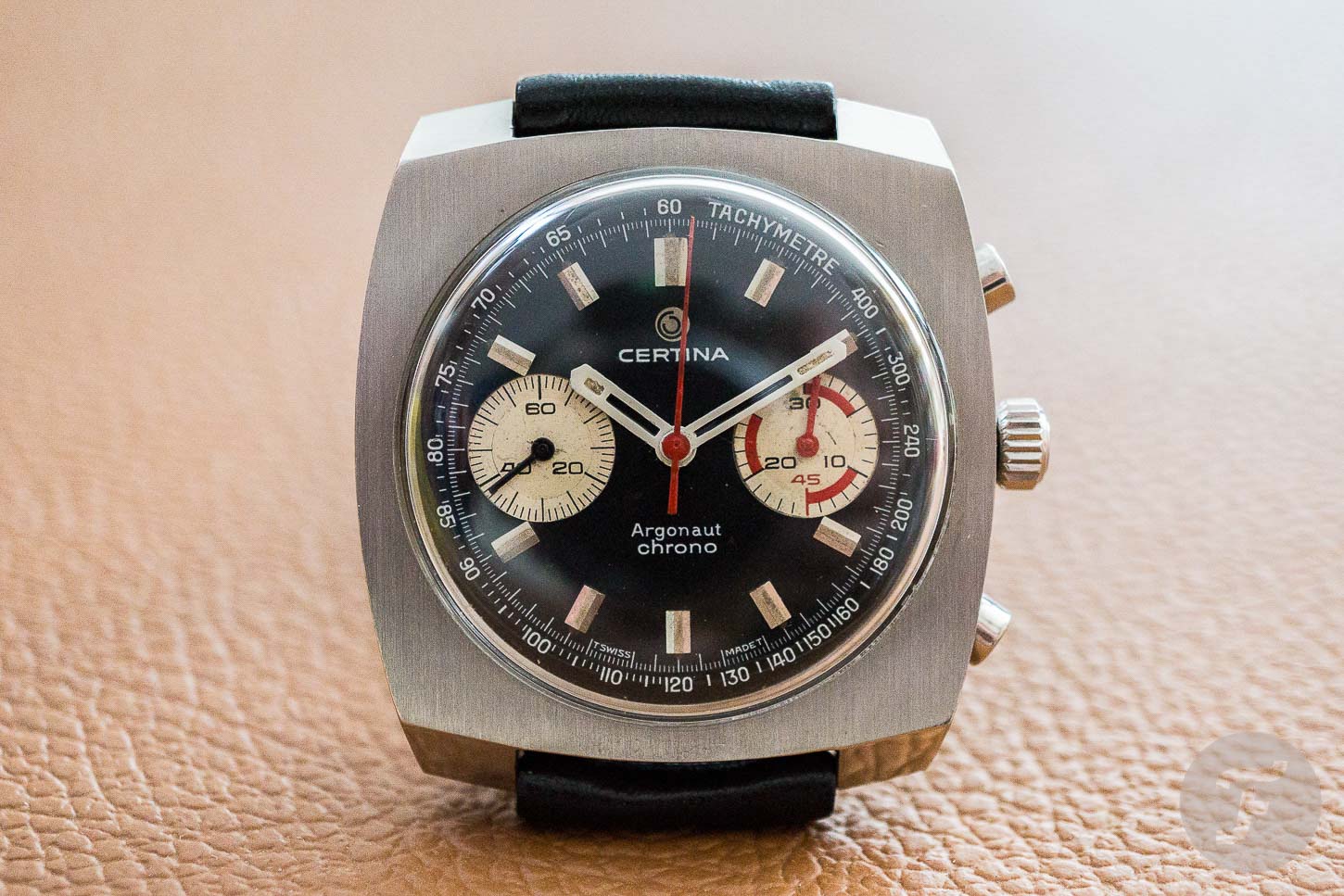 When it comes to Argonaut chronographs, at least the ones I know about, Valjoux movements went into them exclusively. Since my watch is one of the earliest Argonaut chronos it has a Valjoux 23 inside. That is a manual wind, chronograph movement with 17 jewels, 48 hours of power reserve and 18,000 Vph. The 23 is a very interesting caliber for many reasons. To start with it was widely used by a number of brands from Certina, to Doxa, Nivada, Vetta, Heuer etc. It is also the base for the iconic Valjoux 72 that you can find in vintage Rolex Daytonas for example. As I mentioned above, later Certina Argonauts (8401 501) had Valjoux 236 movements inside them. The 236 was an upgrade to the normal 23. It has a Vph of 21,600 instead of the 23’s 18,000. Apart from this however the two calibers are identical. 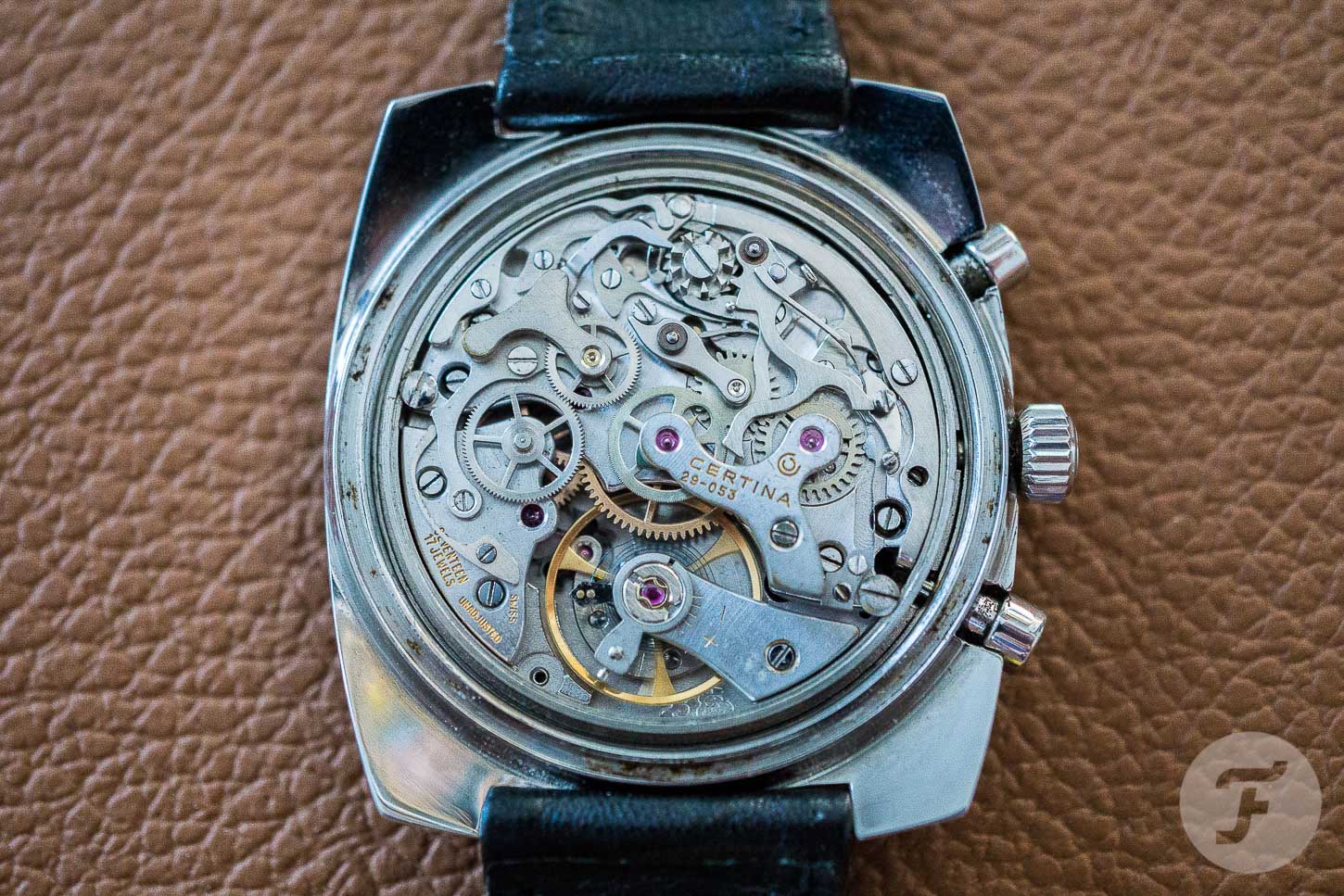 Higher vph (vibrations per hour) meant better accuracy hence the upgrade. It is very easy to check if your watch has the correct caliber. All you need to do is to open the back of your watch. Whether you have an earlier Valjoux 23 (Certina 29-053) or the “upgrade“, the Valjoux 236 (Certina 29-063) the caliber number is on the bridge just under Certina. If you don’t have it on the bridge it is probably a service replacement, as original bridges all contain this number. Please refer to the photo below. The movement does not only contain the Certina caliber number but the actual Valjoux number as well. You can see it engraved into the base plate just under the balance wheel. 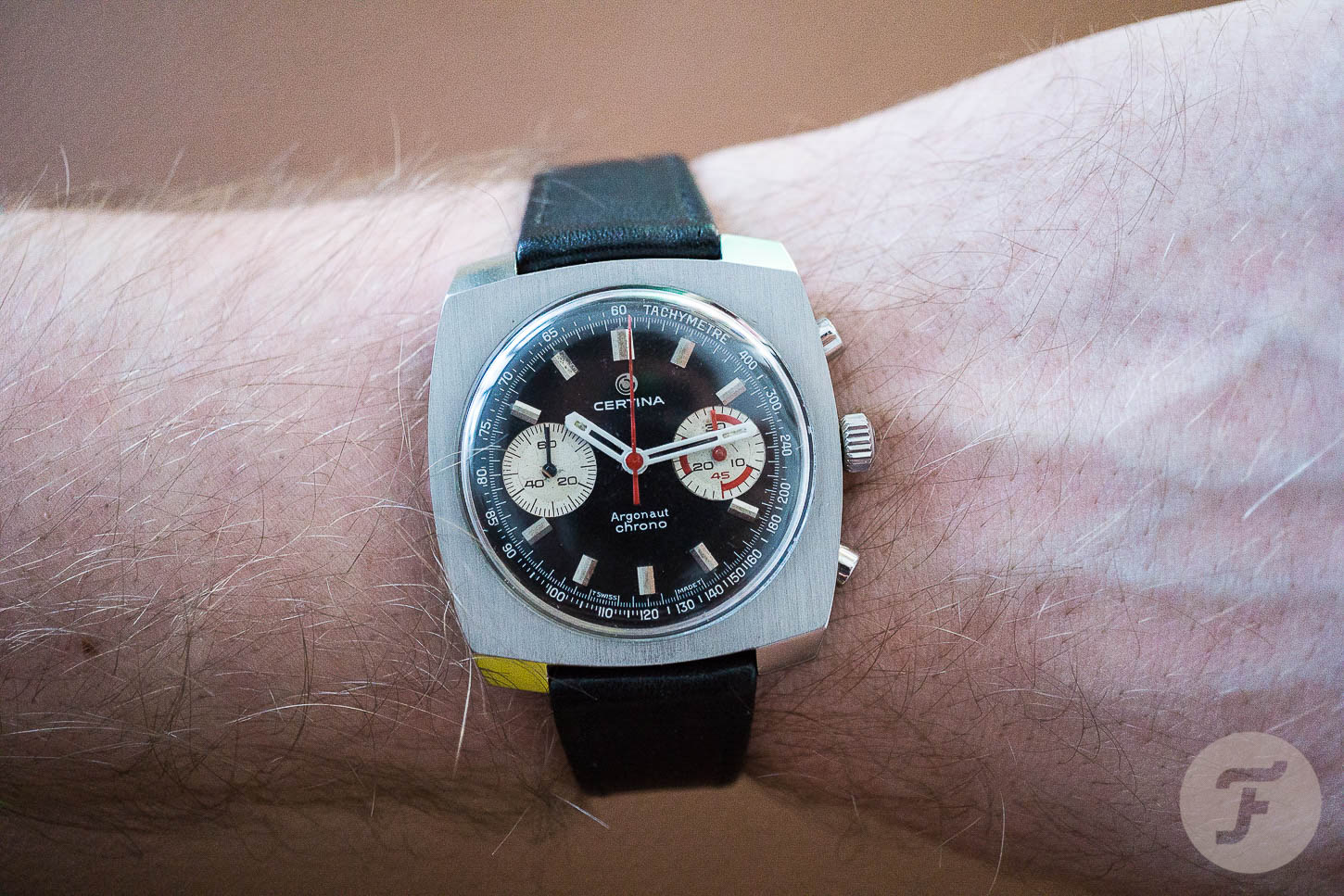 This article turned out to be more technical as I originally intended to write it. However, I did not go into the details of the Certina Argonaut too deep. If you have such a watch or planning to purchase one in the near future hopefully this write up will help you verify the watch in question. Obviously, there are tons of other information regarding this and many other vintage Certina models (Have you heard of their diver’s watches? j/k) and perhaps slowly we will get to those too. In the meantime, I’d like to invite you to visit the Vintagecertinas.ch, a site I wrote about a little while ago. If you have a Certina and you want to know more about it or just feel like doing some research on the brand it’ the best place to start. You’ll hopefully do it with a vintage Argonaut on your wrist.

Hot Topics
Laventure Automobile Chronograph With A Proprietary Movement — Marking A Huge Leap Forward For One Of The Industry’s Most Promising Brands
157 comments
We Talk To Swatch Group CEO Nick Hayek About The MoonSwatch
121 comments
Fratello Exclusive: An Inside Look At The MoonSwatch Production Facilities
76 comments
Summer Splash — Semi-Final 1: Thor’s Doxa SUB 300 Divingstar Vs. Jorg’s Tudor Pelagos FXD
61 comments
How To Prevent Buyer’s Remorse When Shopping For A New Watch
48 comments
Popular
A Question From A Reader: “Which Modern Speedmaster Is Closest To The Original Moonwatch?”
Robert-Jan Broer
13
Speedy Tuesday – The Original Omega Speedmaster Ultraman
Robert-Jan Broer
5
You Asked Us: Tissot Powermatic 80 Seastar 1000 or Longines HydroConquest
Robert-Jan Broer
17