"Time is the best censor and patience the most perfect of teachers" - Frederyk Chopin
Gerard Nijenbrinks
comments ...
Share

Chopin captured the essence of his work with the above words. Often believed to be French, Chopin was of Polish origin in fact.

He was born in 1810 in Żelazowa Wola and lived in Poland until 1830 before moving to Paris. It was only in 1835 when he gained French citizenship, while he passed away in 1849. Chopin’s love for his homeland is most perceptible in one of his greatest works, Étude in C minor Op. 10 No. 12, otherwise known as the Revolutionary Étude. It’s no surprise that Poland’s only high-end watch brand chose Chopin Op. 10 No. 12 as the designation for their first timepiece.

In our report on the inauguration of the Chopin watch brand, we already mentioned the presence of the brand’s first watch. We will now dive further into the watch itself. Let’s start with the 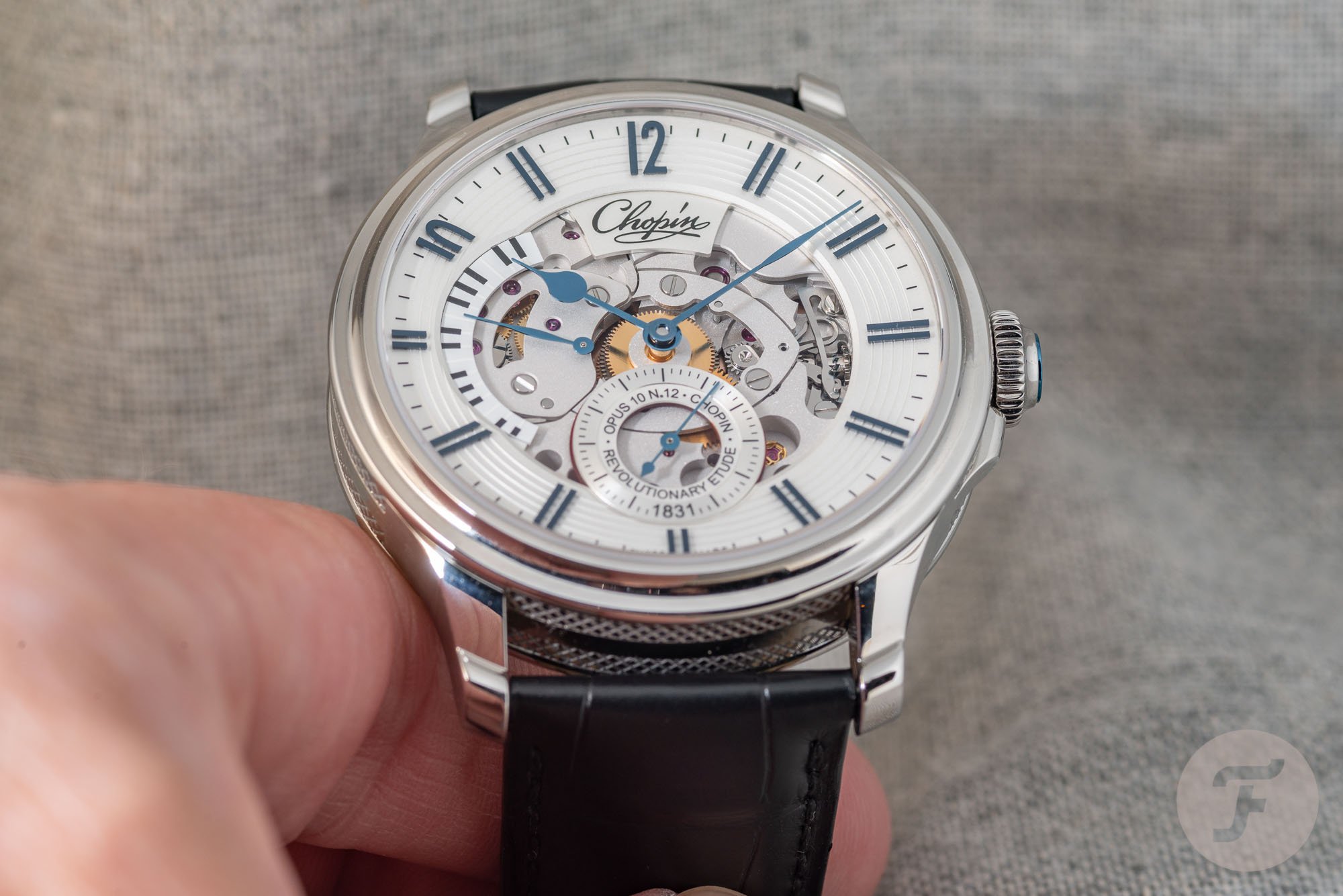 Looking at the watch it’ll be immediately clear that in fact, it doesn’t have a real dial as we know it. Merely a multi-level dial ring bearing index markers and a few numerals. Piano-key shaped index markers for all hours, except the 10 and 12 which are applied in numerals as a reference and a tribute to Chopin’s famous Op. 10 No. 12 piano work.

Left on the dial side we’ll find a power reserve indicator, from which the scale resembles a piano keyboard for obvious reasons. Another element that captures Chopin’s spirit is a rim of brilliant red. This rim, made from precious stone named carnelian, surrounds the seconds sub-dial located at 6 o’clock. The red color is not only a reference to the 19th century November Uprising in Poland, but also symbolizes the composer’s heart, which was embedded in a pillar at the Holy Cross Church in Warsaw on the 96th anniversary of his death. Inside the seconds subdial scale, we’ll find the model indication of the watch, as well as the name of the works it refers to. 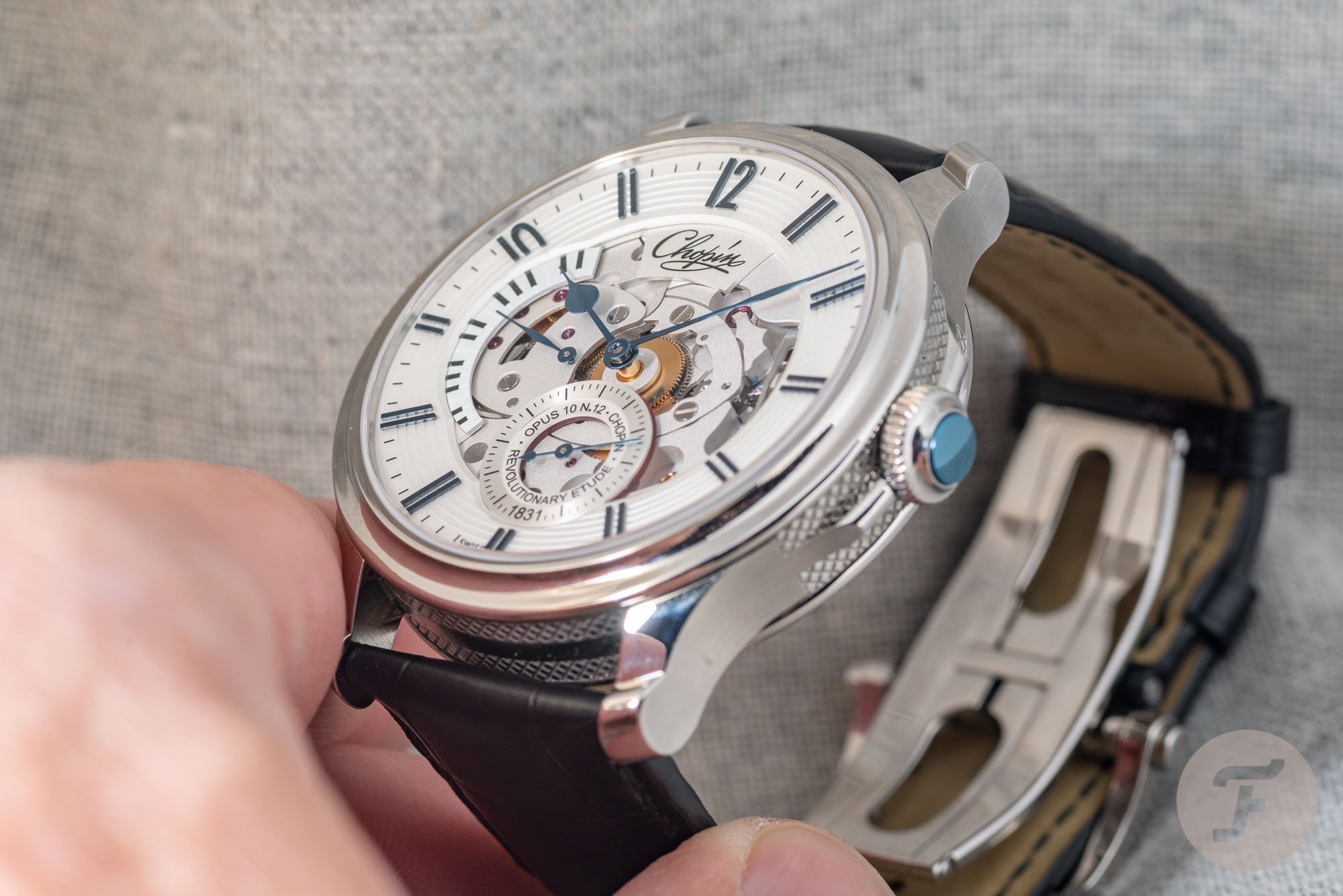 All four hands have been plated to attain a blue hue, which, at least at the showed prototype, was slightly lighter to that found on the index markers and numerals. The hands are designed in a style which was popular during Chopin’s time. Another touch of this blue can be found at the cap of the watch crown.

While we now turned the watch to its side to see the blue-capped crown, let’s talk about the casing of the Chopin Op. 10 No. 12. Made out of stainless steel it measures 43mm in diameter. A substantial watch, however, quite elegant and not bulky in any way. 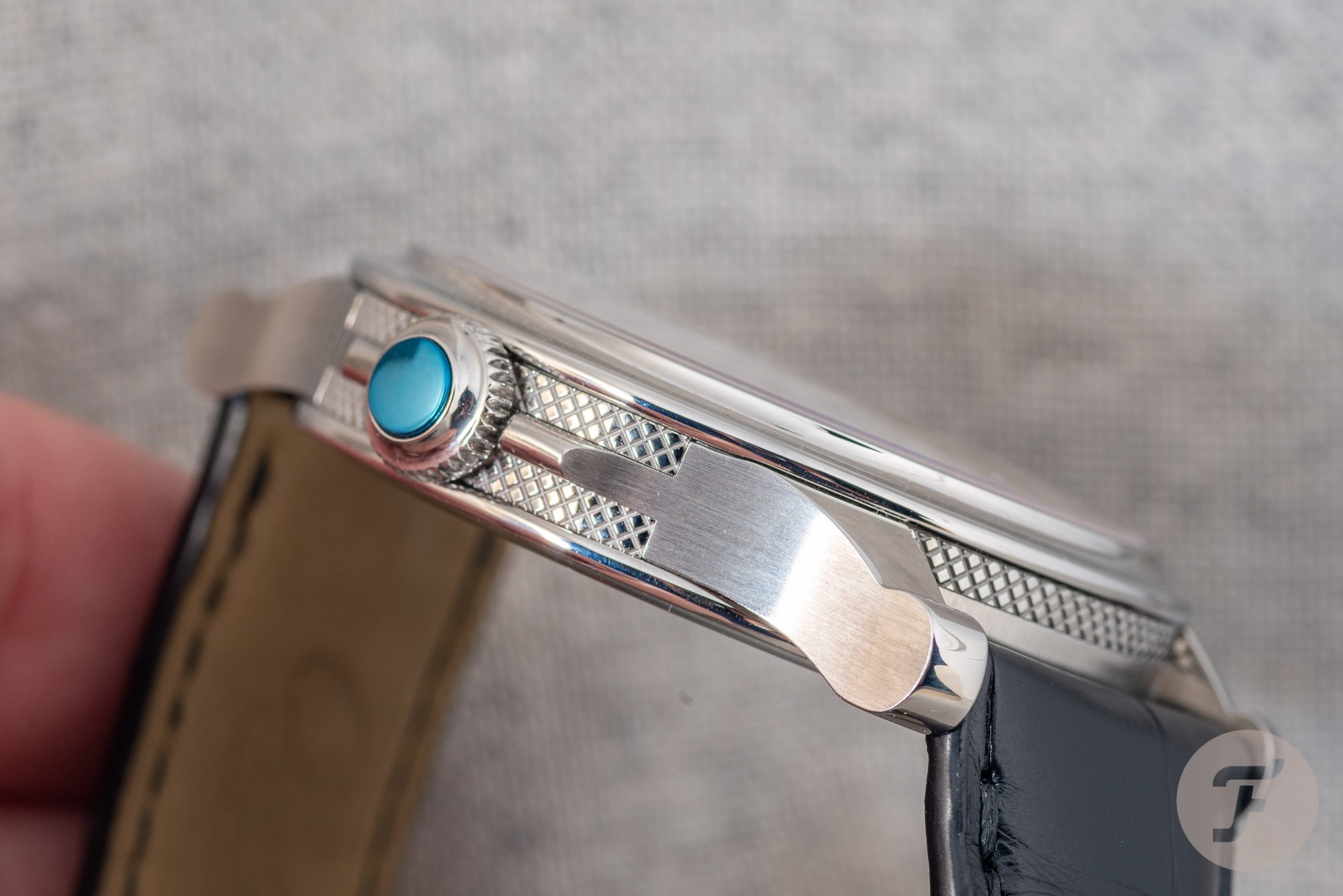 The Chopin brand was inspired by many dimensions of the composers work, and so should be their first watch. For the design concept of the Chopin Op. 10 No. 12, the founders of Chopin reached out to Antoine Tschumi, founder and artistic director of world-renowned Swiss design studio NeoDesis. NeoDesis is known for cooperations with Breguet, Hublot, Czapek, Harry Winston, Greubel Forsey, Hermes, and more.

As mentioned in the ‘dial side’ section of this article, many details of the watch resemble the era, work, or composer himself. This is true for the watch’ casing as well. The form of the lugs, for instance, was inspired by the legs of Chopin’s piano, and the pattern found on the side of the casing was found on his pocket watch.

The only watch known to have belonged to Frederyk Chopin is a pocket watch. Of course, a pocket watch, because in the 1800s wristwatches didn’t exist. It’s believed that he received this pocket watch as a gift from Italian Opera singer Angelica Catalani. That watch is now part of the collection of the Muzeum Fryderyka Chopina in Warsaw. 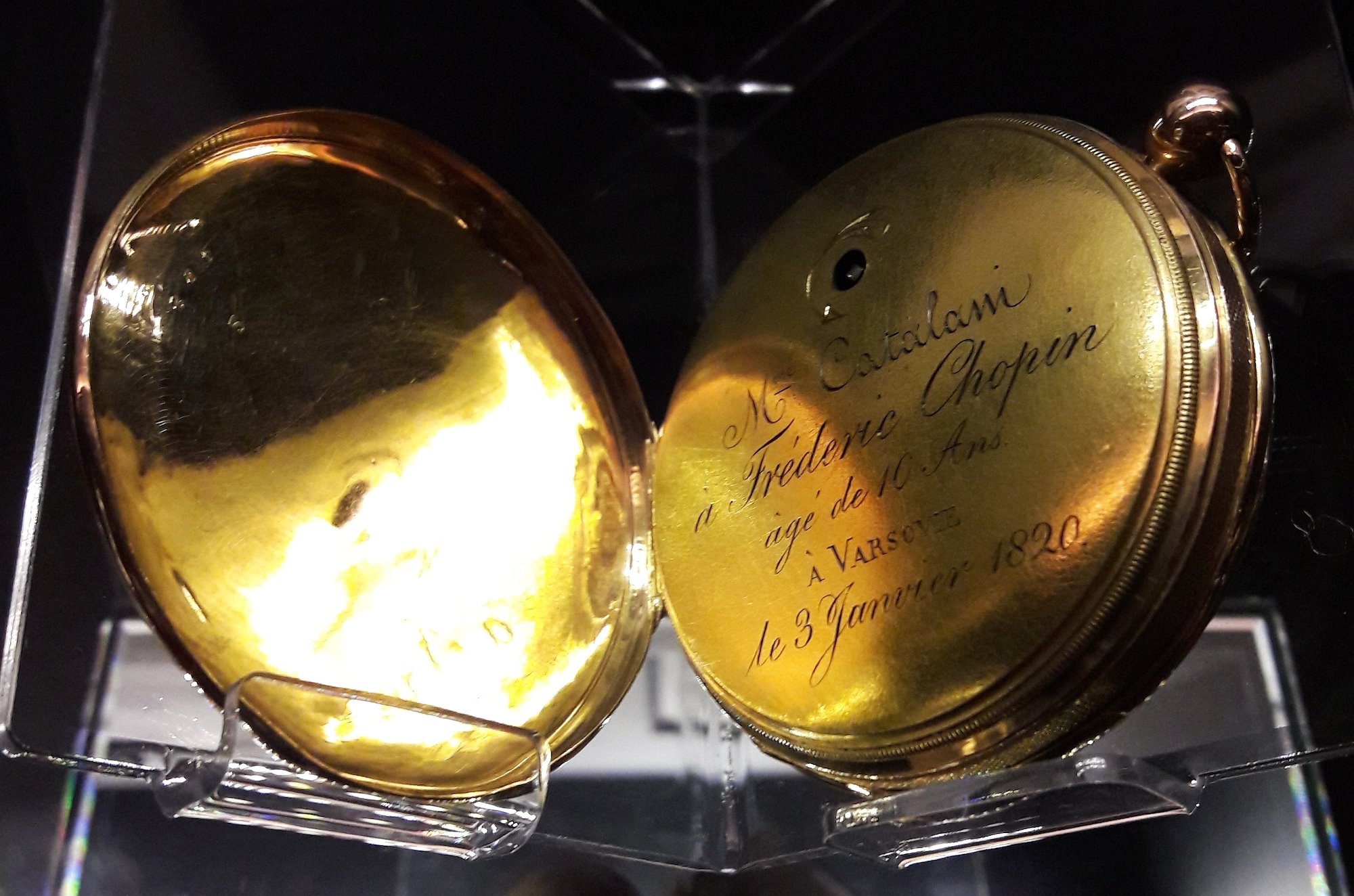 I had a close look at Chopin’s pocket watch in the museum and became a bit puzzled. Not only because the engraving has been made in two or three different styles, but more because it reads that it was a gift to Chopin on January 3rd, 1820, while he was the age of 10. Born on March 1st, 1810, however, he was only 9 years old at the date engraved in the watch, not 10. Then as well, I find it a bit strange that Chopin’s name, like the rest of the engraving, was in French while he still lived in Poland at that time and was known by his Polish name. The Italian-born singer Angelica Catalani should have presented the watch as a souvenir of his concert. I couldn’t find proof in her bibliography that she’d ever been in Poland. Well, nothing important of course. I understand that it’s all a long time ago and times were very different back then. On with the Chopin Op. 10 No. 12. 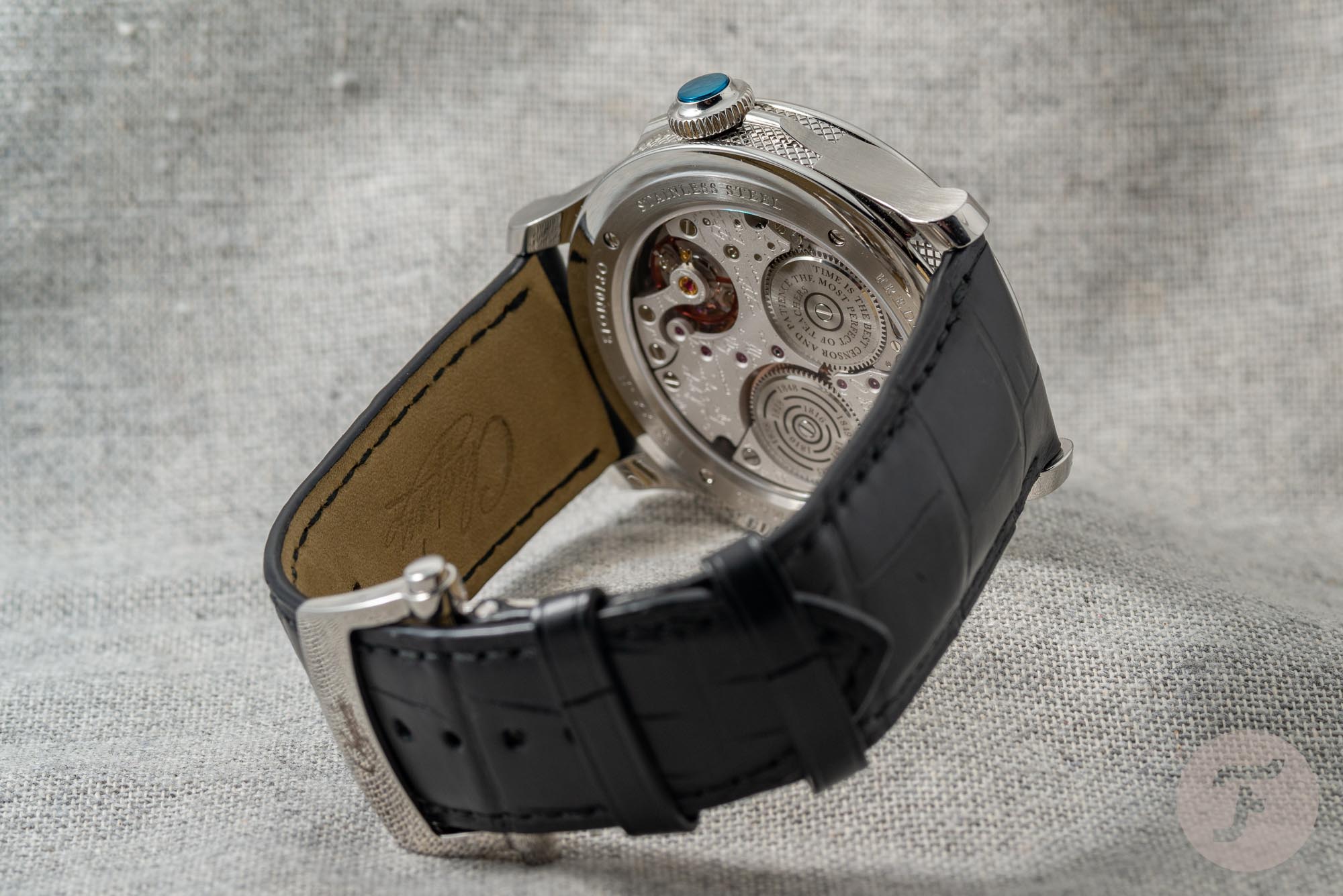 The watch shown in the pictures in this article is still a prototype, and some subtle changes will be made to the design. The lugs will be bent downwards slightly which will enhance the wearing comfort. As well, the pattern on the side of the casing will be enhanced slightly further onto the sides of the lugs. Design models including these changes were already present, although it’s not easy to determine from a grey piece of plastic.

For the movement, Chopin brand’s owners sought cooperation with prestigious independent Swiss watch and movement manufacturer Schwarz Etienne. An over 100-year-old, family-owned company with a reputation of being one of the very best in the watchmaking industry. Schwarz Etienne is responsible for the manufacturing and quality control processes involved in the creation of Chopin brand watches. 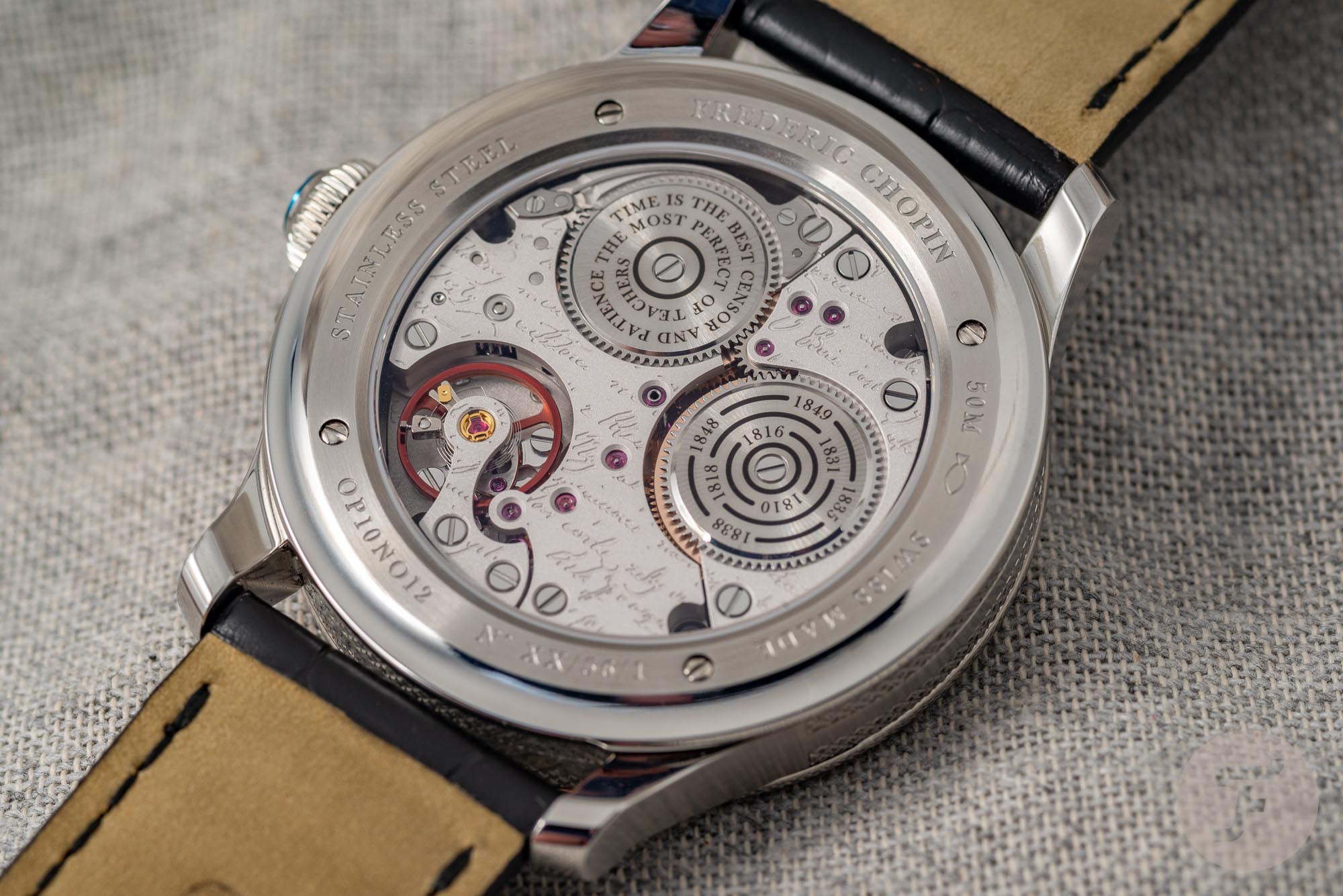 For Chopin, Schwarz-Etienne developed their exclusive MSE210 movement, comprising of 197 components from which 37 are rubies. Running at a frequency of 21.600/H, and sporting two parallel coupled barrels, the power reserve of this beautiful movement is an extensive 96 hours, which is equivalent to 4 days.

Engravings on the movement’s plates are an excerpt from Chopin’s manuscript in which he gave voice to his frustration after learning of the Polish Uprising’s failure. The barrels refer to the artistic achievements of Chopin, as well as to important dates in his life. 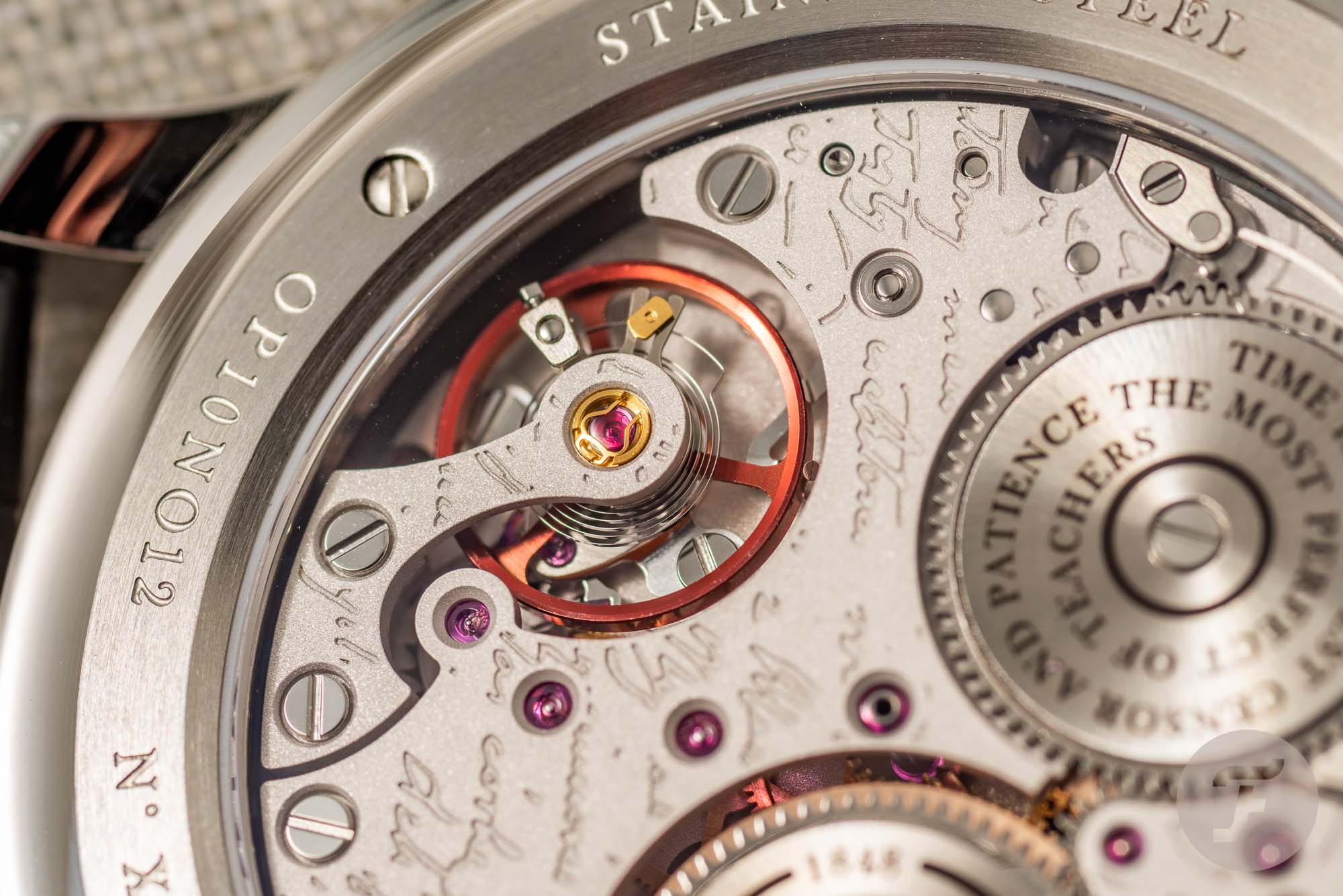 The element that makes the Chopin Op. 10 No. 12 most unique is the balance wheel. Manufacturing a balance wheel requires a great deal of precision, as even the slightest miscalculation can disrupt the mechanism accuracy. Schwarz Etienne developed and perfected a method of coloring the balance wheel a deep, red color. The red balance wheel is a distinguishing feature of Chopin brand watches, and, like the heart of a watch, it again symbolizes the composer’s heart.

…only 56 pieces of this watch will ever be made

Chopin Op. 10 No. 12 was created under the guidance of the Fryderyk Chopin Institute and annual production of Chopin’s watches is limited to 56 pieces, making it a real catch for horology connoisseurs and collectors. Only with consent from Poland’s Minister of Culture and National Heritage, the number of watches supplied annually by the Chopin brand can be changed.

The Chopin Op. 10 No. 12 is expected to be available by the end of the year (2019) and will have a price of €12.750,-. More information on the watch and the new brand can be obtained from chopinwatches.com. Reservations for the watch can be made there as well.