The Chronoswiss Styloscope Fountain Pen Found In The Company’s Basement

In 2000, I got a Chronoswiss Régulateur (later dubbed “Regulator”) watch. It is a beautiful 38mm piece with a silvery-white dial and blue hands. It has the classic dial layout that Chronoswiss founder Gerd-Rüdiger Lang introduced in the mid-1980s as one of his first designs. The watch came in a beautiful wooden box with a green interior. The papers were signed by Gerd-R Lang himself with his green Pelikan M800 demonstrator fountain pen.

For the 20th anniversary of Chronoswiss, Lang went to the German company Pelikan and requested a special fountain pen. The result was the Chronoswiss Styloscope pen in a limited (numbered) series of 999 pieces. This pen was never sold by Pelikan but directly via Chronoswiss. 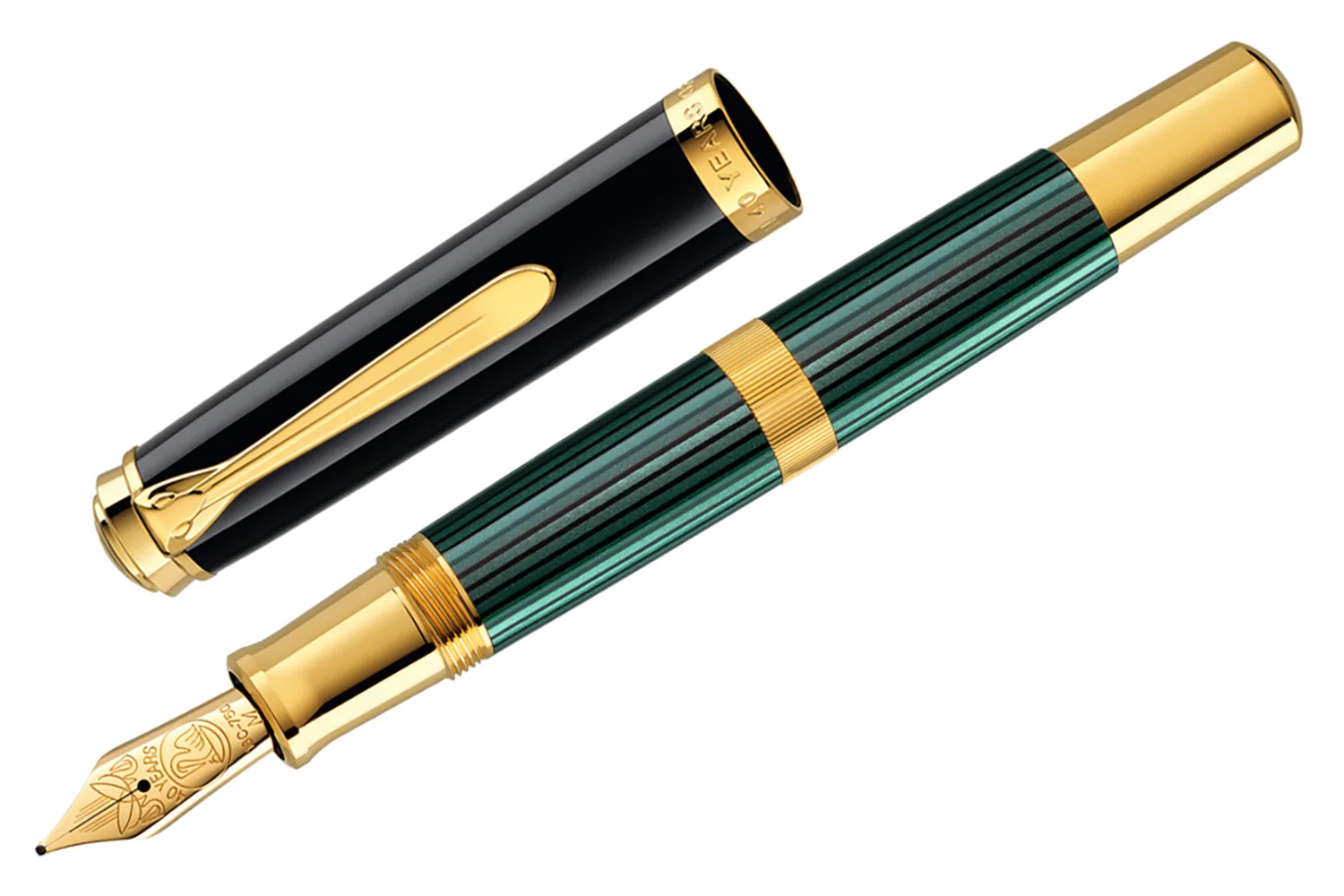 The brand Pelikan might not sound as familiar to you as Montblanc, but it’s a very old German pen manufacturer that still exists today. Pelikan started as an ink and paint company in 1832 and started producing fountain pens nearly 100 years later in 1929. Today, Pelikan produces low-cost pens and has a collection of fountain pens in its “Fine Writing” catalog. From the first Pelikan model 100 in 1929 to today’s flagship model M1000, these are all incredibly nice writing instruments, with the green color and semi-transparent ink window as a trademark. 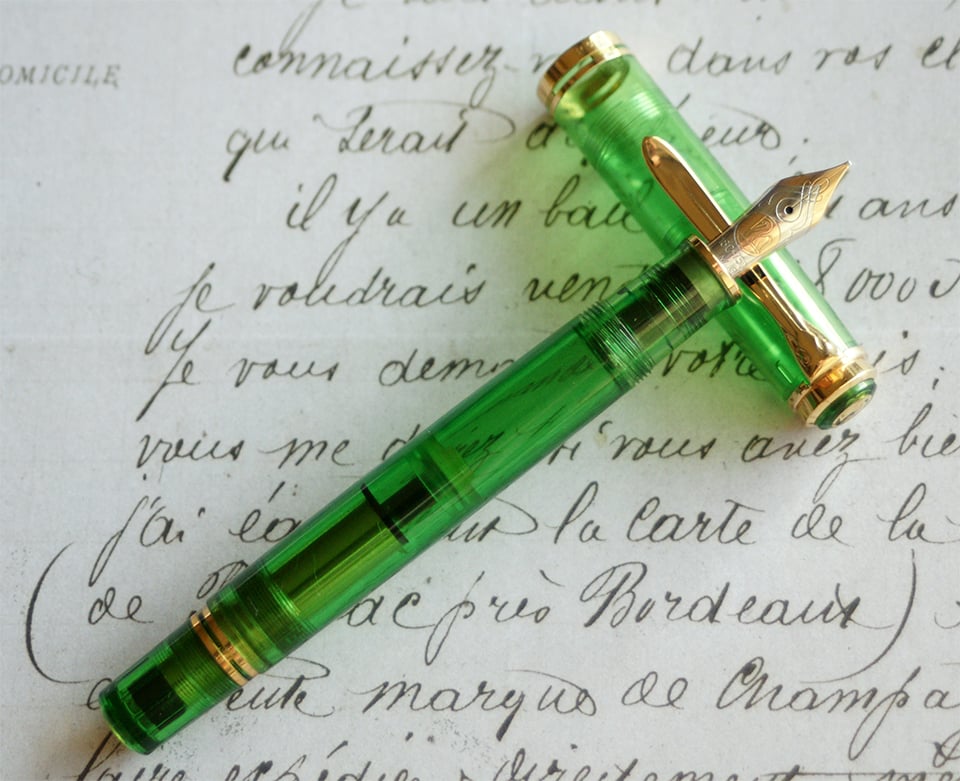 In 1987, Pelikan introduced its first modern oversized pen, the M800. Initially, this fountain pen was only available in the classic Pelikan green color with black stripes. This pattern is also referred to as “Stresemann,” named after the foreign minister of the Weimar Republic, Gustav Stresemann (1879–1929), who wore thin-pin-striped suits. It was this Pelikan M800 that Chronoswiss founder Gerd-R Lang used to sign all the warranty certificates that came with his watches. 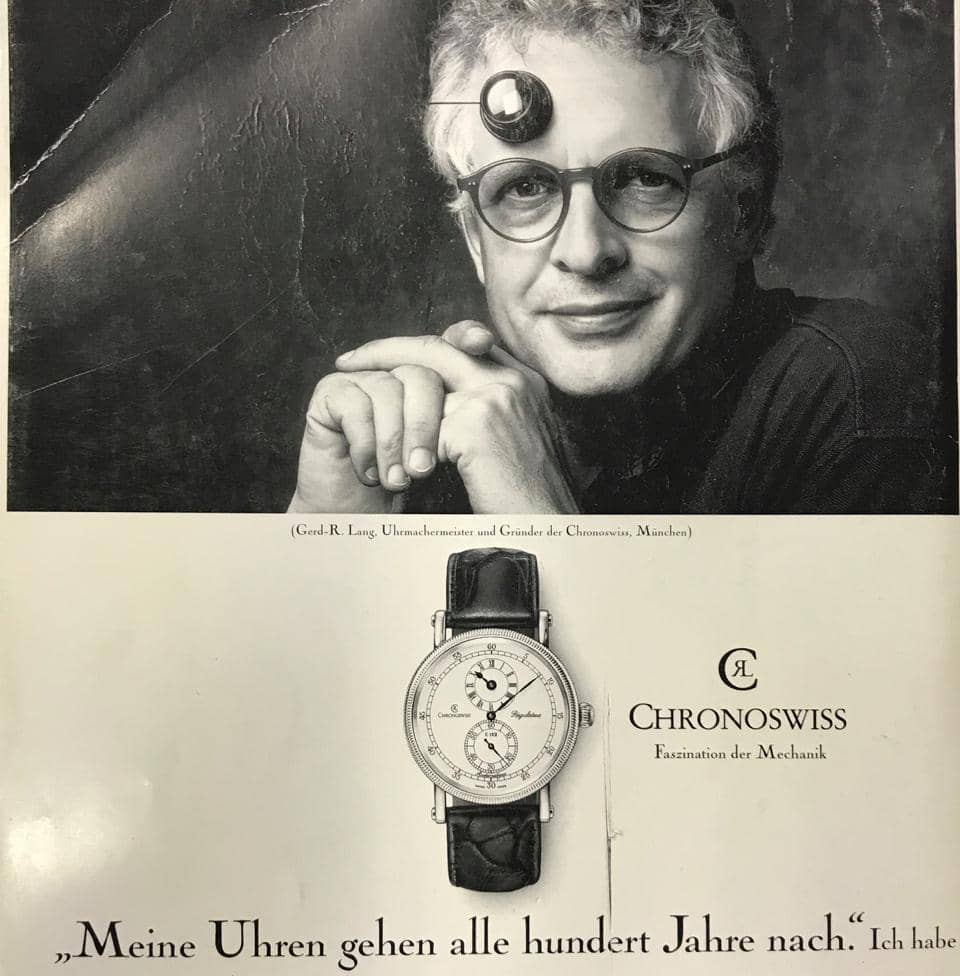 An old advertisement showing Gerd-Rüdiger Lang and the Chronoswiss Régulateur

He used a green demonstrator version of the M800 with green ink. In case you are not familiar with a demonstrator fountain pen, it’s actually quite similar to what we watch enthusiasts know as the display case back. The transparent fountain pen shows the ink and ink-filling mechanism inside the pen’s barrel. 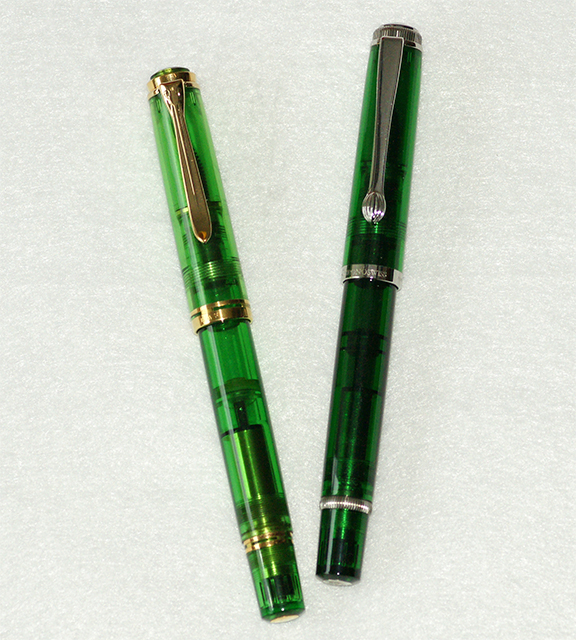 The original M800 demonstrator and 2002 Chronoswiss Styloscope side by side. Image courtesy of The Pelikansperch.

Lang was so enthusiastic about the Pelikan M800 that he reached out to the German pen company to have a custom-made version for Chronoswiss. For the 20th anniversary of the company in 2003, Lang wanted to have 999 pieces of the green demonstrator M800. 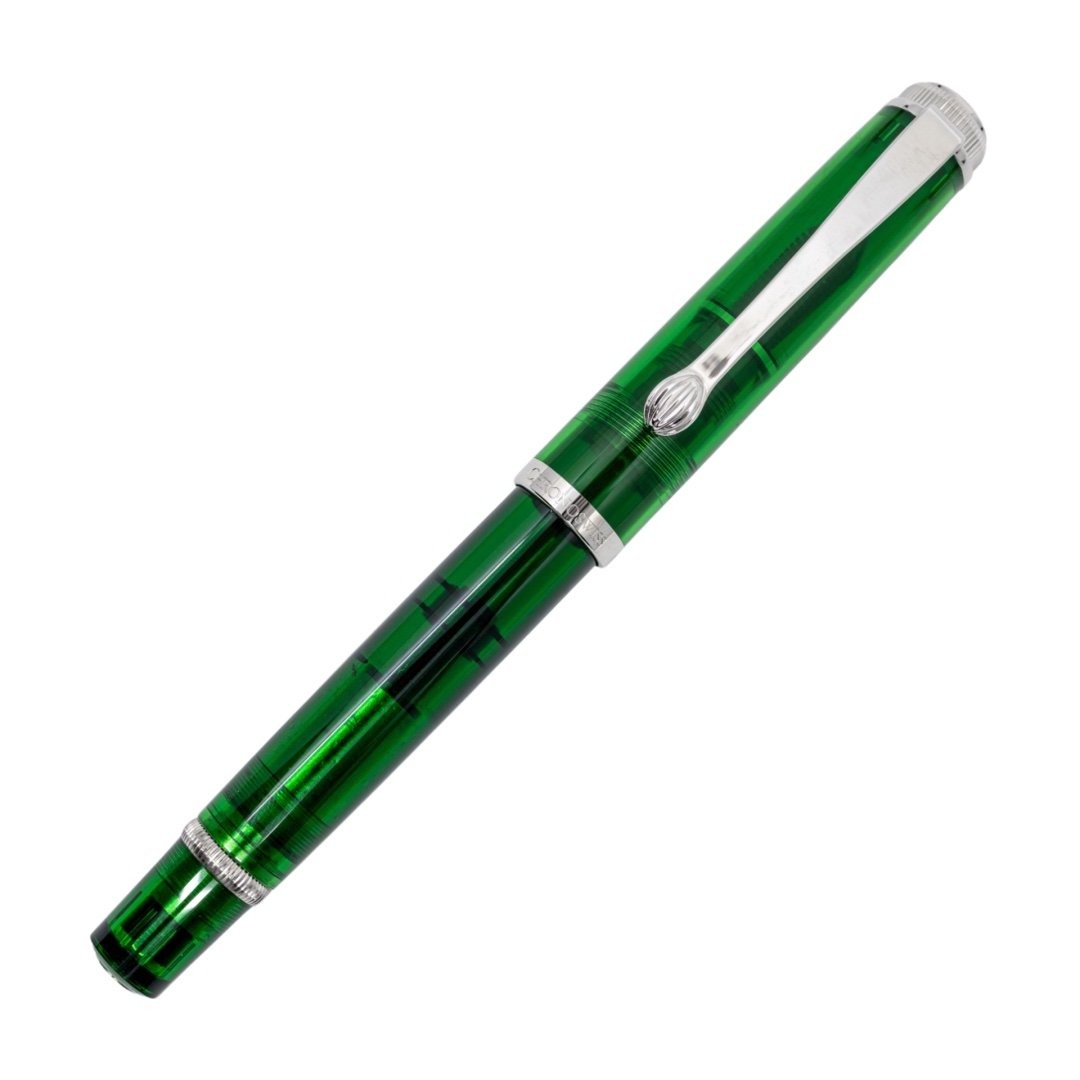 Pelikan went above and beyond for this order, even changing the cap, clip, and name of the M800 pen. These details all referred to the typical Chronoswiss design elements. All the silver elements were sterling silver, including the ring engraved with the Chronoswiss name. 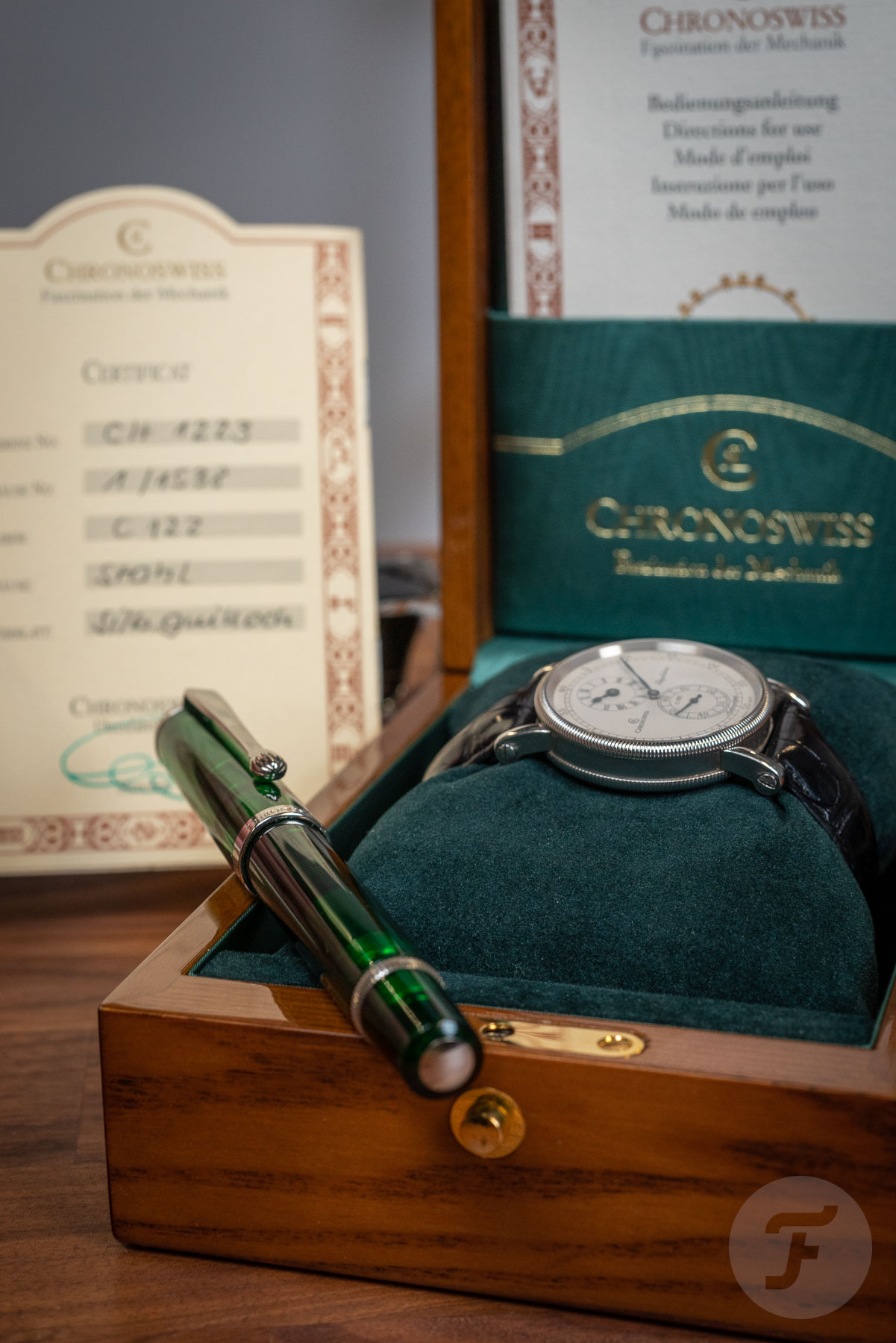 The end of the clip shows a resemblance to the famous Chronoswiss onion crown, and the trim rings on the cap and piston knob should remind you of the coin-edge Chronoswiss bezel. All 999 of these pens were numbered and sold solely through Chronoswiss’ retailer network. The model was renamed the Chronoswiss Styloscope, and Pelikan’s name, its logo, or M800 reference wasn’t even on these pens. 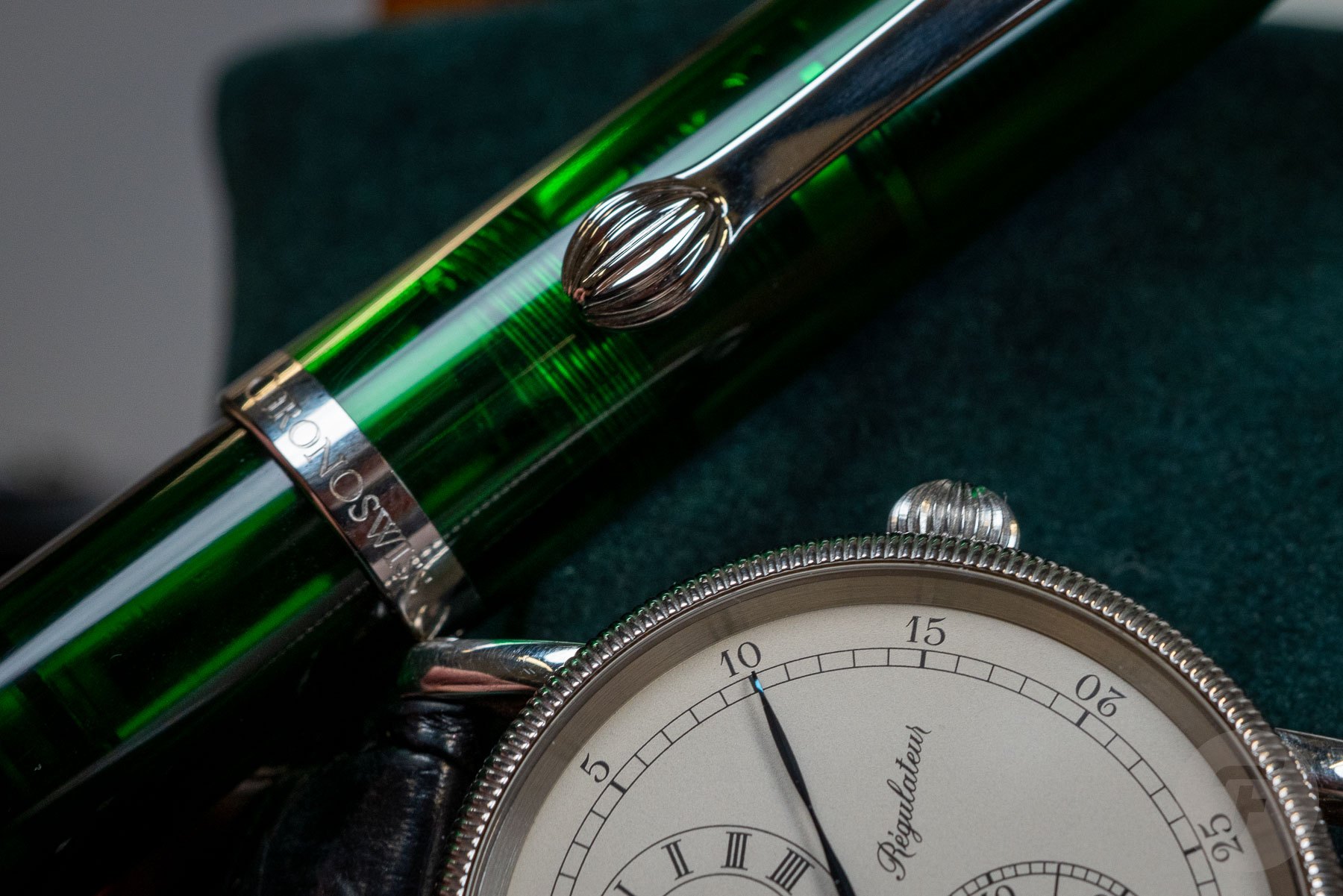 Being a pen enthusiast myself in those years (I was still in university around the turn of the millennium), I remember seeing this fountain pen and knowing about the story. But, as a student, these fountain pens weren’t cheap, and I never got to own one. Every once in a blue moon, one will pop up on eBay, but most of them found their homes with pen collectors or Chronoswiss owners who are not willing to part with them. 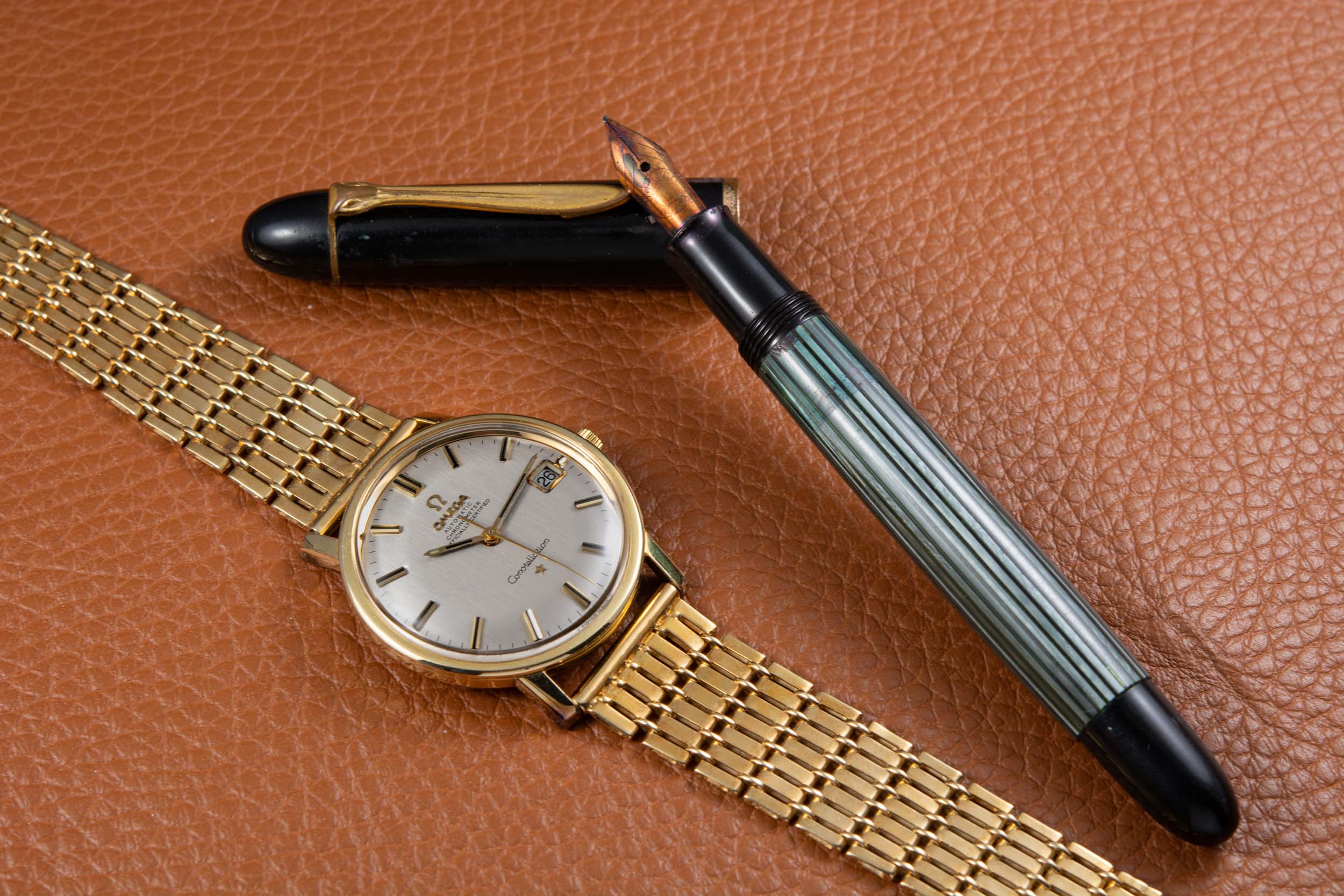 Pelikan pens run in the family

In the past 20 years, I’ve been using fountain pens on and off, but I rediscovered my love for the fountain pen in recent years. Pelikan is dear to me, just like the Omega Constellation, because there’s some family history behind it. My grandfather has used a green pinstriped Pelikan 140 since the mid-1950s. I received his pen after he passed away around Christmas 2011, together with his gold Constellation.

However, when I was a student in the late 1990s and early 2000s, I bought my first Pelikan pen. It was an entry-level M200, which normally comes with a steel nib, but the shop offered to replace it with a gold nib from the M300 or M400 for a few bucks more. I more than happily accepted that offer. 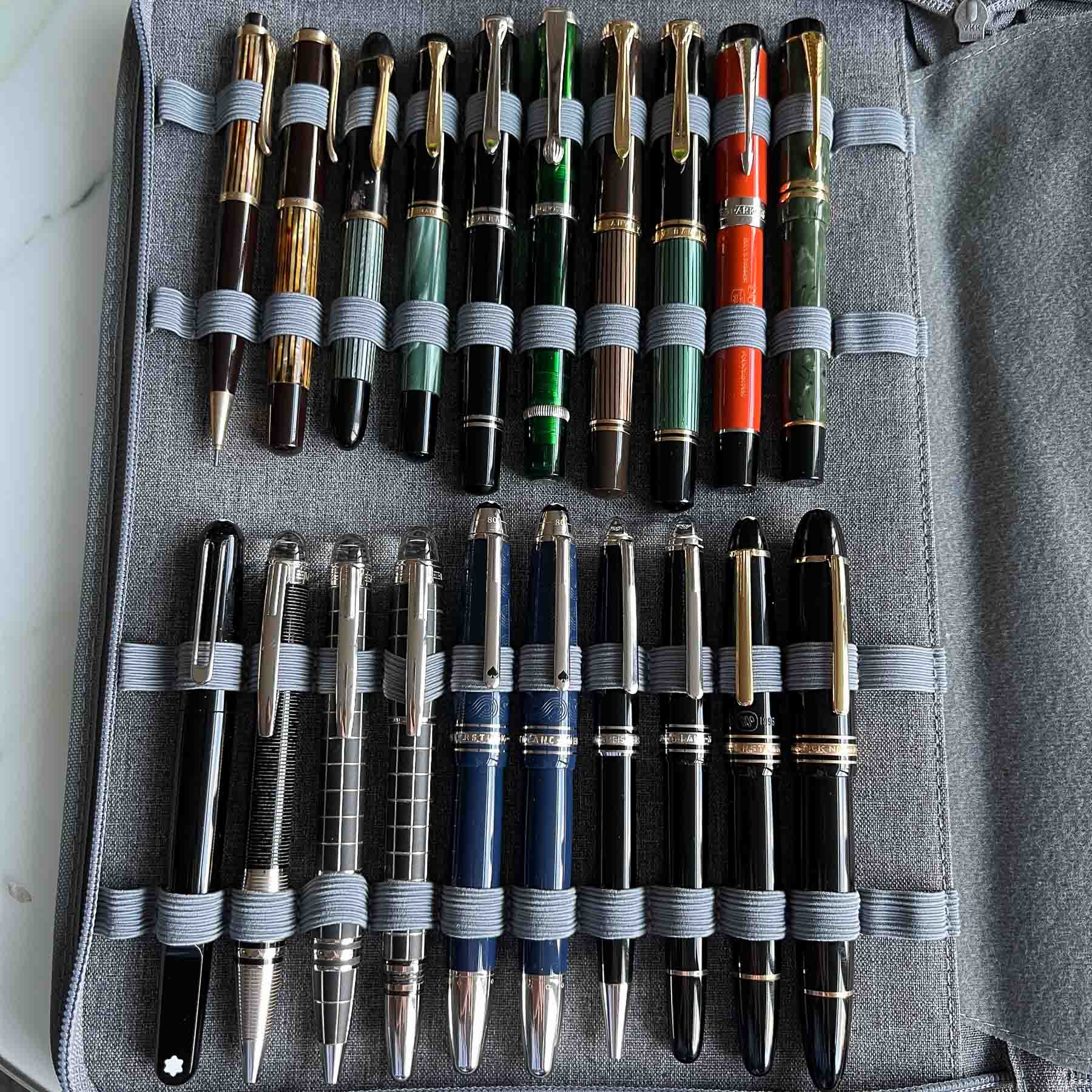 Part of my pen collection. The upper row shows a few Pelikan pens.

Now here comes the interesting part. When I visited my dad a few months ago, I saw the same M200 on his desk and asked him about it. My dad told me that he also bought it around 20 years ago (from a different shop) and had it fitted with a gold nib. It was the very same pen, and neither of us knew that the other had it. Anyway, I’ve bought more than a few Pelikan pens through the years, including a few M800s and an M1000, but I never came across the Chronoswiss Styloscope M800 demonstrator. 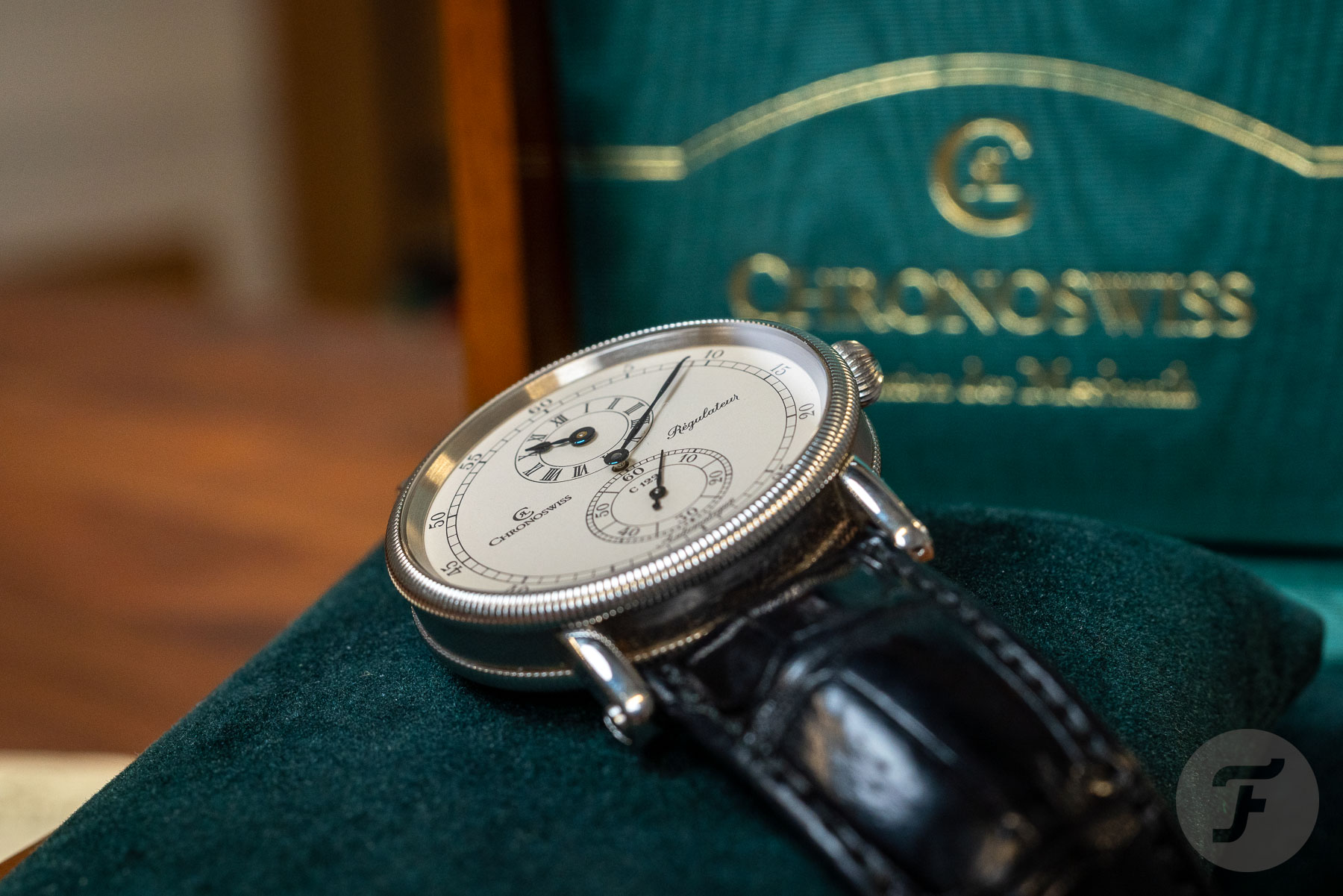 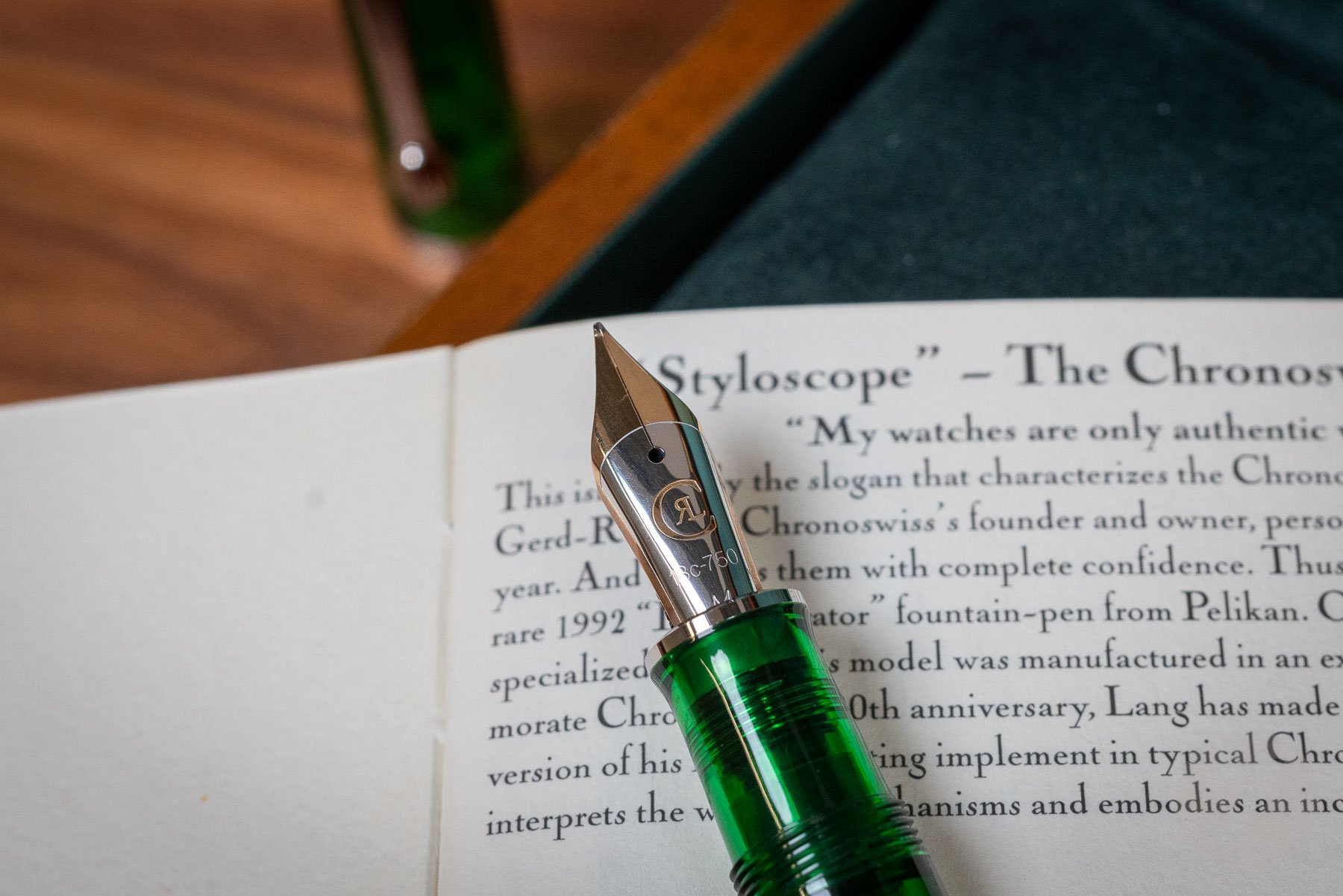 Fast forward to 2022. Beat Weinmann, Chronoswiss’ COO (and an avid user of fountain pens), found 88 unnumbered Chronoswiss Styloscope pens in the basement of the company’s headquarters. One could wonder what he was doing there, but the 88 pens surfaced, approximately 40 with a medium nib, 40 with a broad nib, and 8 with an oblique nib. 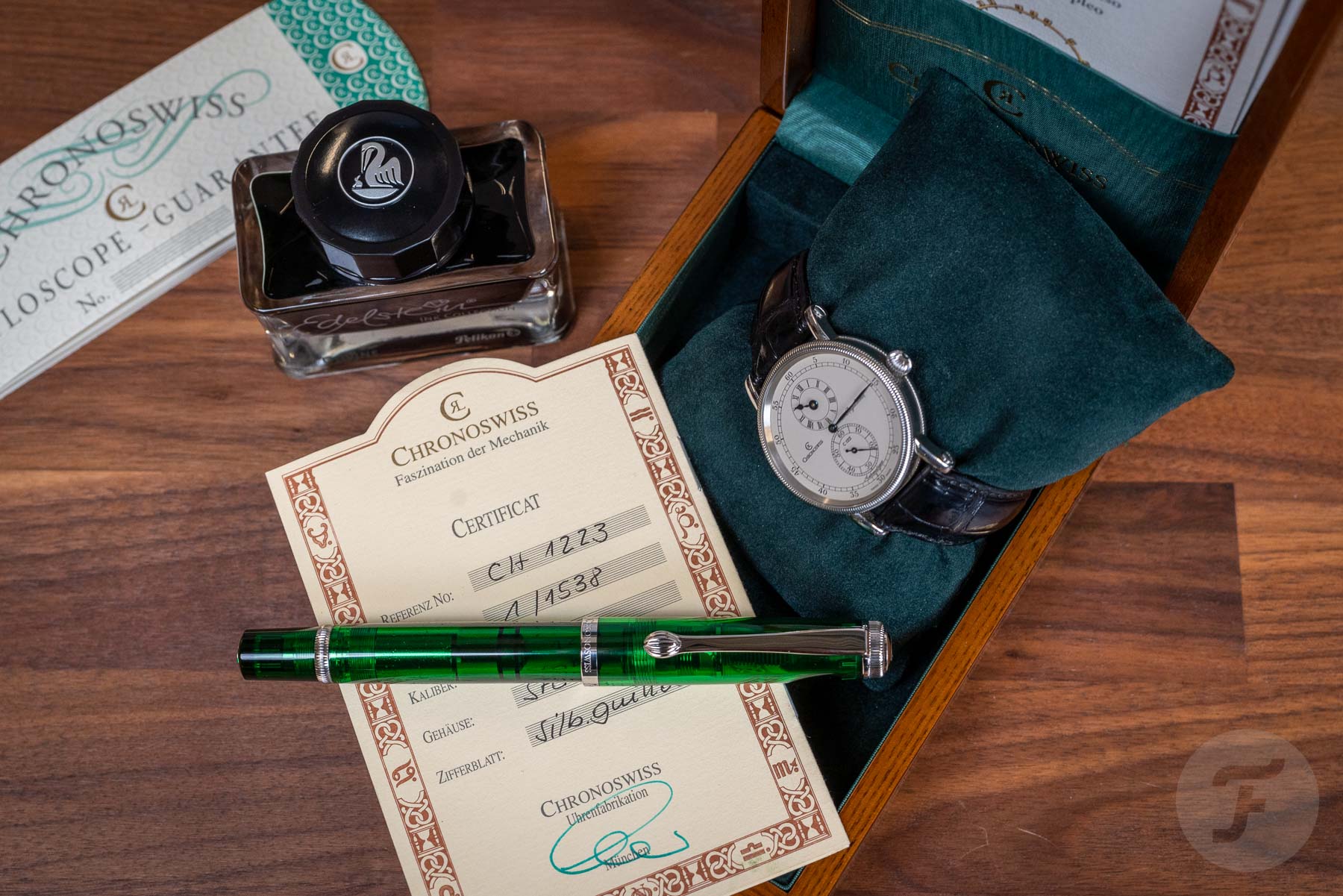 Together with the pens, Weinmann found paperwork showing to whom the numbered 999 pieces were sold. These 88 unnumbered pieces came on top of the original 999 and had been sitting in the Chronoswiss building for 20 years. 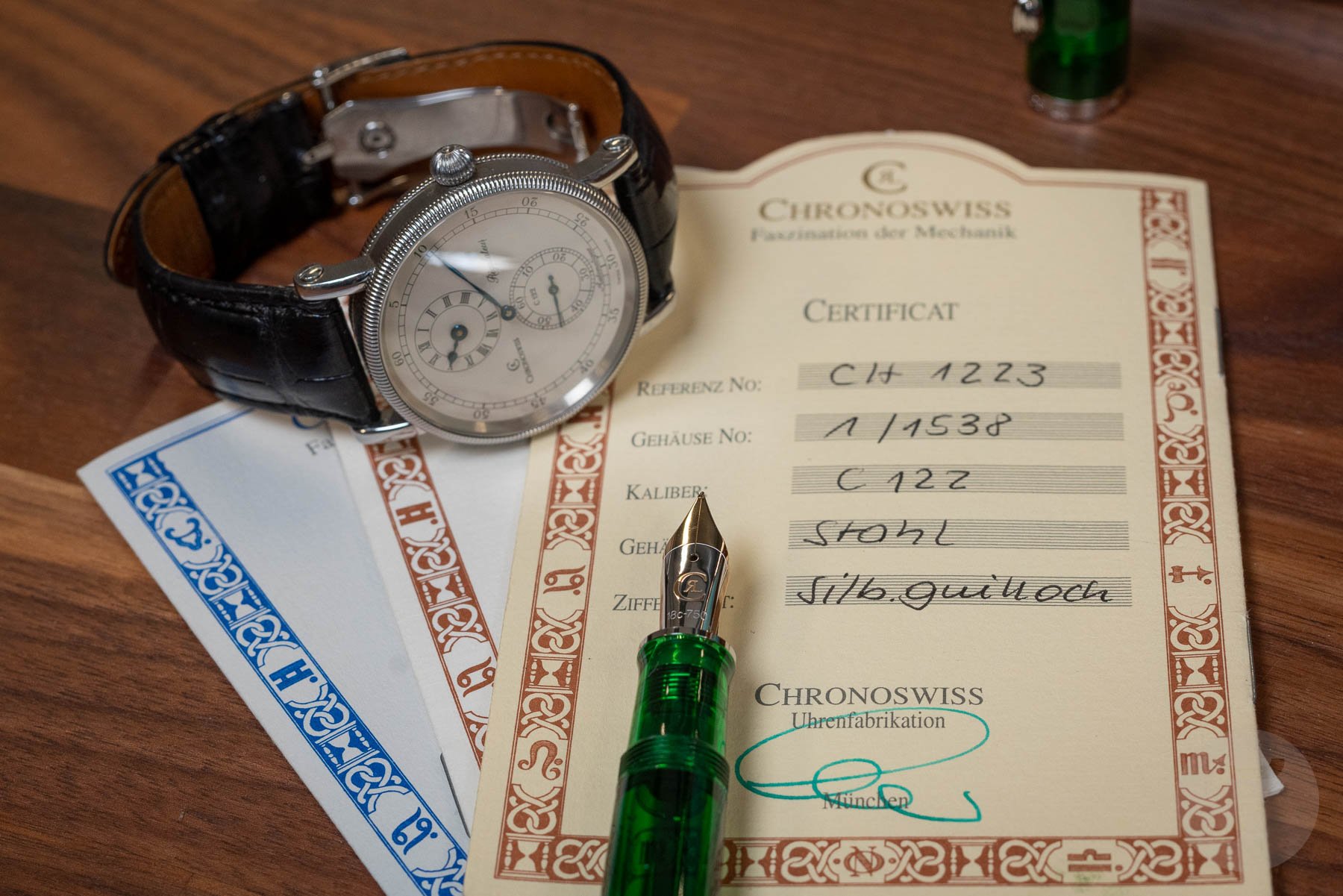 The 88 pens found their way to pen dealer Style of Zug in Switzerland. Samuel Naldi, a watch enthusiast himself (he contributed an article to Fratello here), leads Style of Zug. The company specializes in pens and other luxury goods and now offers the Chronoswiss Styloscope in its assortment. 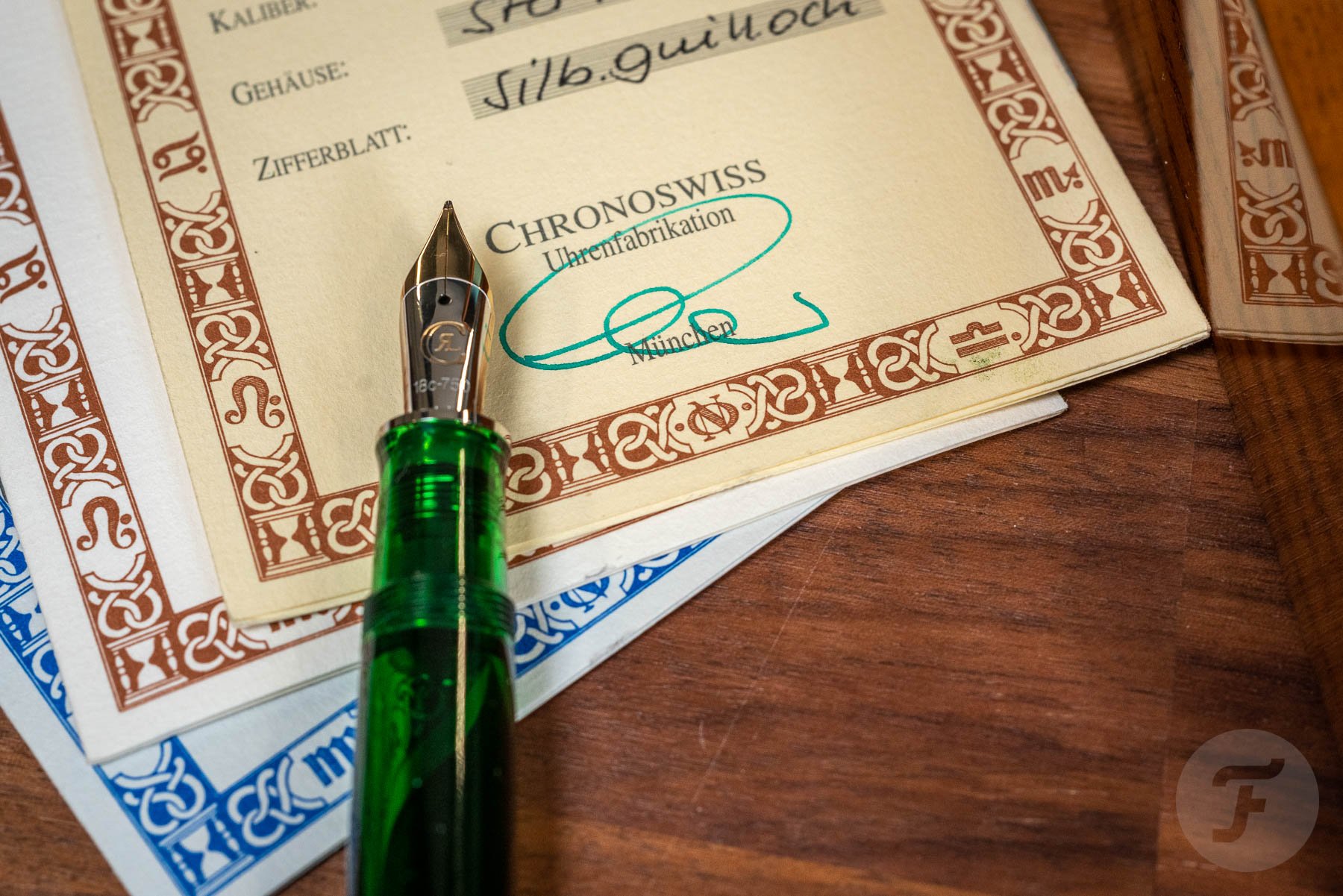 Green ink for the Chronoswiss Styloscope

The Chronoswiss Styloscope by Pelikan does not come cheap at CHF 865 (€809 excluding VAT), but the M800-based pen is a hell of a writer, and I prefer it over my Montblanc 146/Le Grand, for example. Then there’s the sterling silver hardware and very limited production of these pens, which makes them even more special. 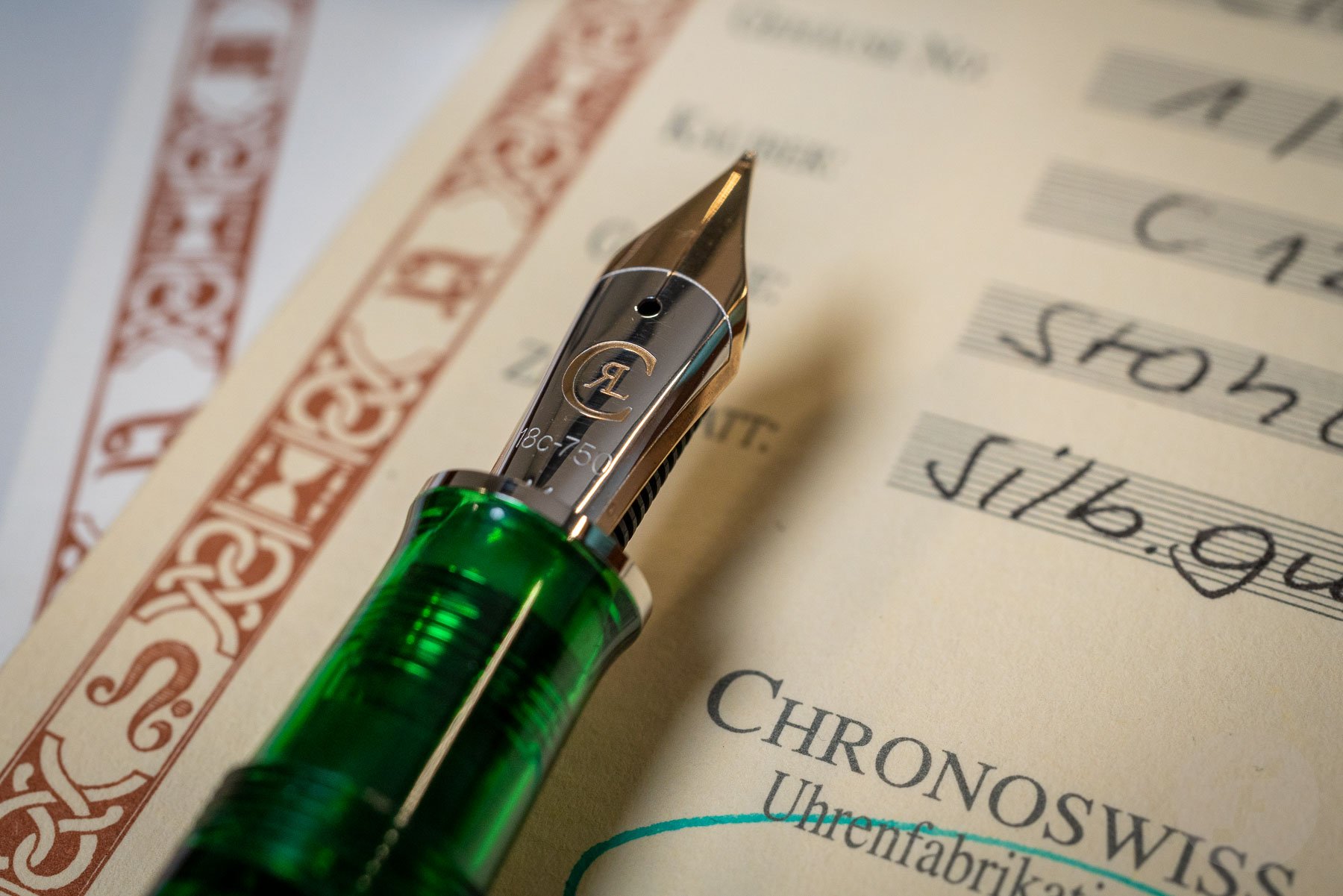 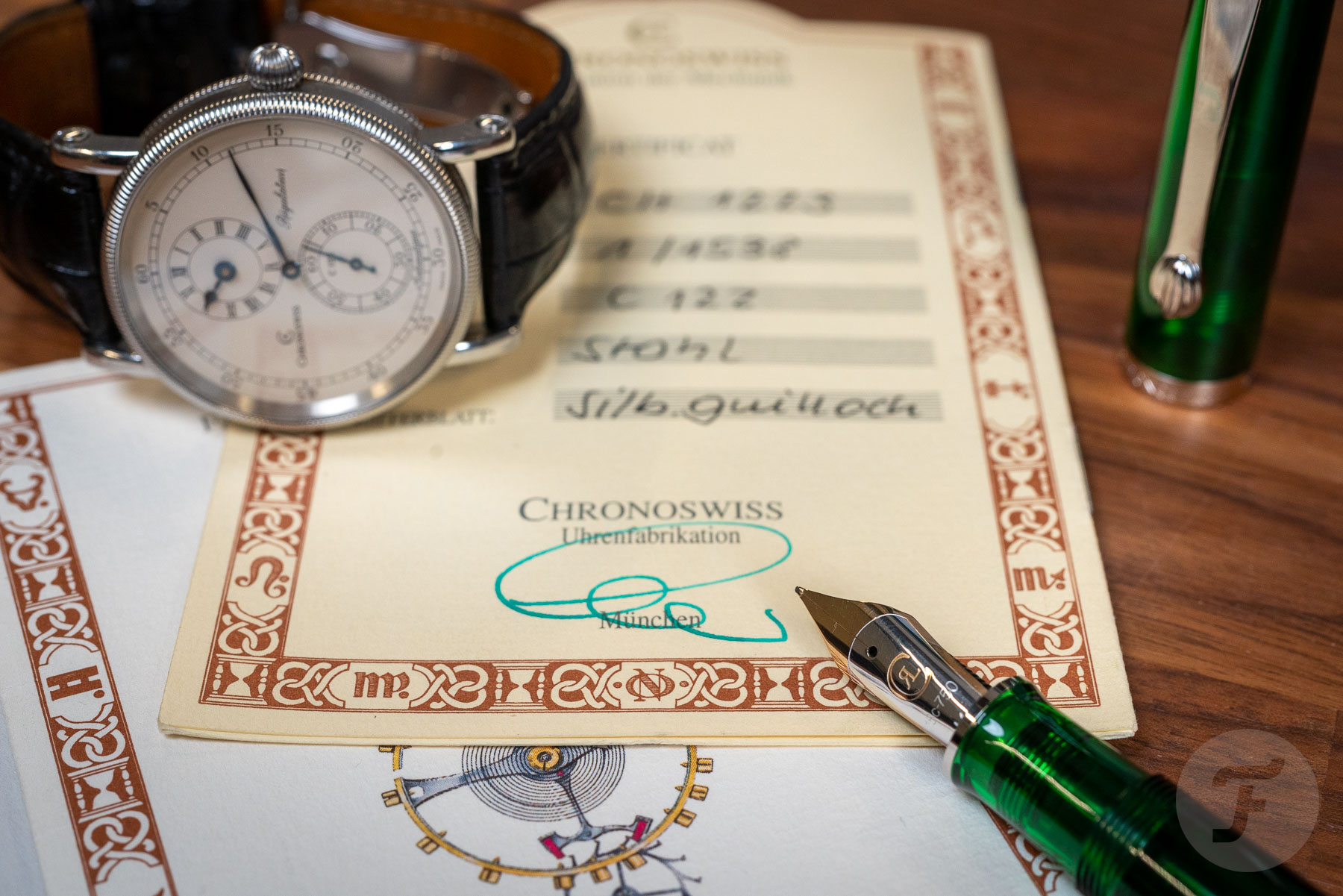 If you’re looking for a nice (demonstrator) fountain pen with a clear link to watches, this might be the one for you. For readers of Fratello, Style of Zug adds a bottle of Pelikan Apatite or Aventurine Edelstein ink worth €25. And yes, it’s green ink, of course, as that’s what Gerd-R Lang used.