In a sea of retro-inspired dive watches, Citizen calls your attention to a true retro classic of its own. In 1985, the Japanese brand introduced the original Aqualand Depth Meter. A true diver’s watch, it only saw one major update in the early ’90s. Ever since then, the watch has remained in production without much cosmetic deviation at all. As such, it may come as a surprise that Citizen is introducing two variations of this classic model to its Promaster collection this year. Meet the Aqualand Depth Meter JP200 series.

For avid divers or dive-watch fans, the Aqualand may have already earned its reputation as a serious tool watch or a collectible. For the uninitiated, though, it would not do the two new models enough justice to skip over the context of the original Aqualand Depth Meter. So let’s go. 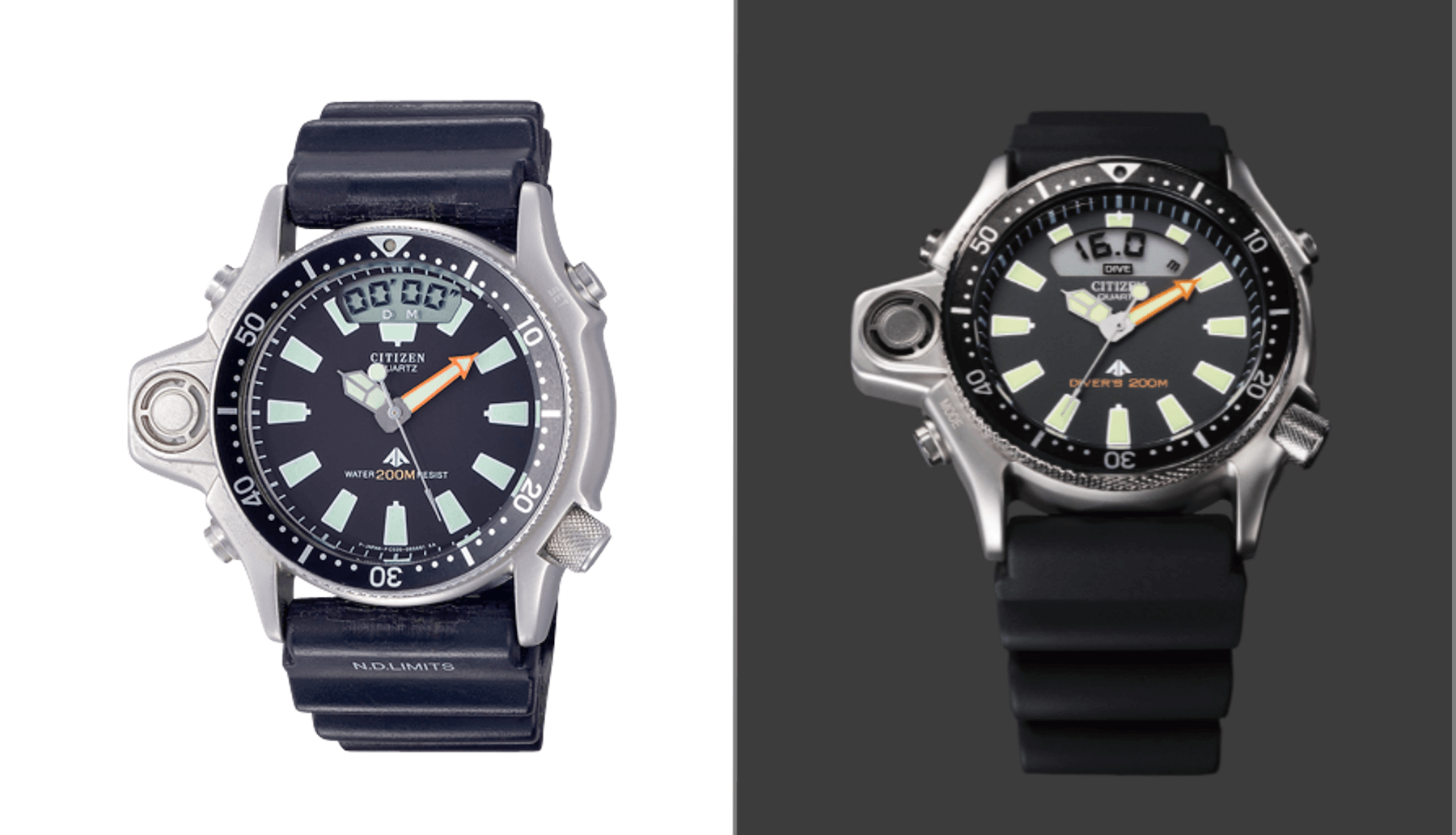 In the ’80s, the Aqualand was hailed as the world’s first analog dive watch combined with an electronic depth meter (hence the name) and a digital aperture display on the dial. We have previously shared its kudos in a review of a more modern Promaster Aqualand model. Around the same time, the dive computer also started to emerge as a sophisticated instrument. The latter would soon conquer with its superior functionality and render the dive watch non-essential in the sport.

What happened to the Aqualand?

Clearly, the catastrophic timing didn’t kill the Aqualand. If it had, we wouldn’t be here talking about the two new variants today. Quite the opposite, the watch was featured in the free-diving cult film Le Grand Bleu (1988) by Luc Besson and worn by the protagonist played by Jean Reno. The hybrid watch caused enough sensation that it gained a foothold among divers and continued to appear on their wrists. Thanks to this, Citizen even updated it with added dive functions in 1992 and released a new reference. While keeping the same look as its predecessor, the upgraded model JP2000-8E would give birth to the JP200 series. 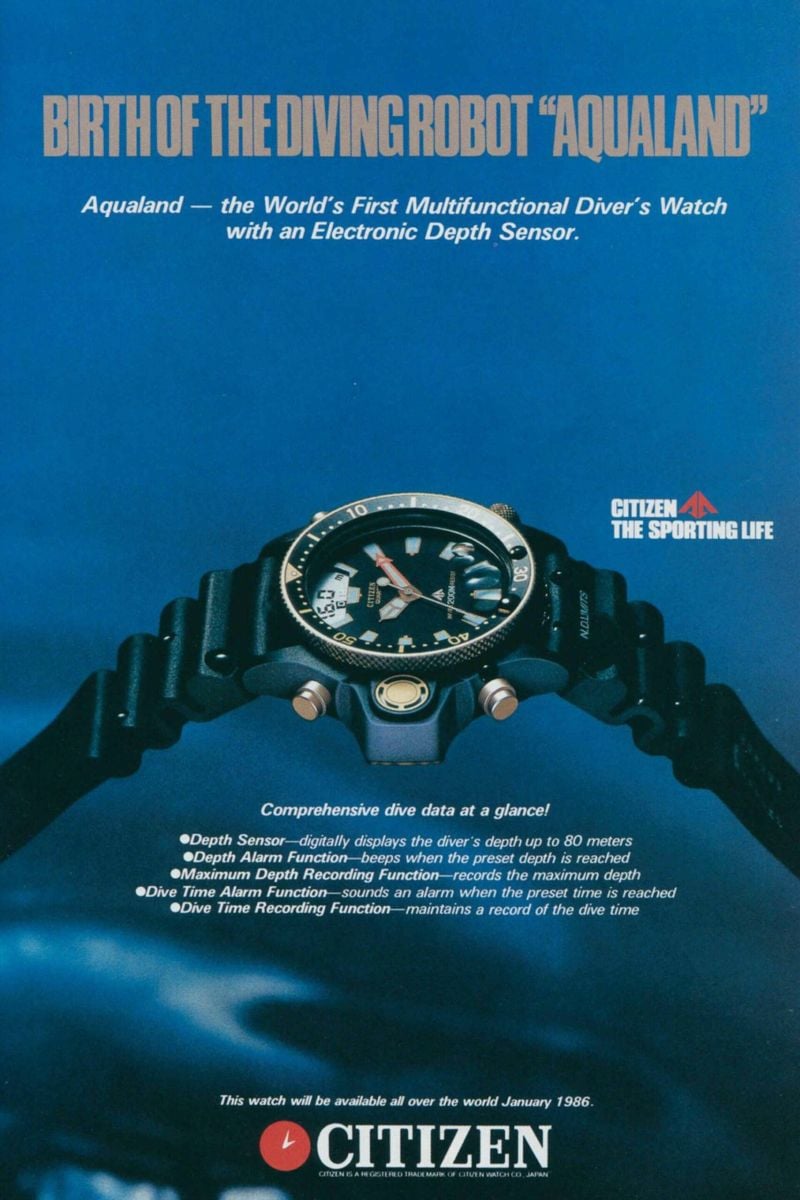 For 30 years, the Aqualand JP200 has remained in demand with real divers who need a backup timer for their dive computers. It has also captured the imagination of “desk divers”, who are drawn to the distinctive look of the watch. According to Citizen, the Aqualand JP200 series is one of its best-selling dive-watch families to date. And you can still find the JP2000-8E on the Citizen website. 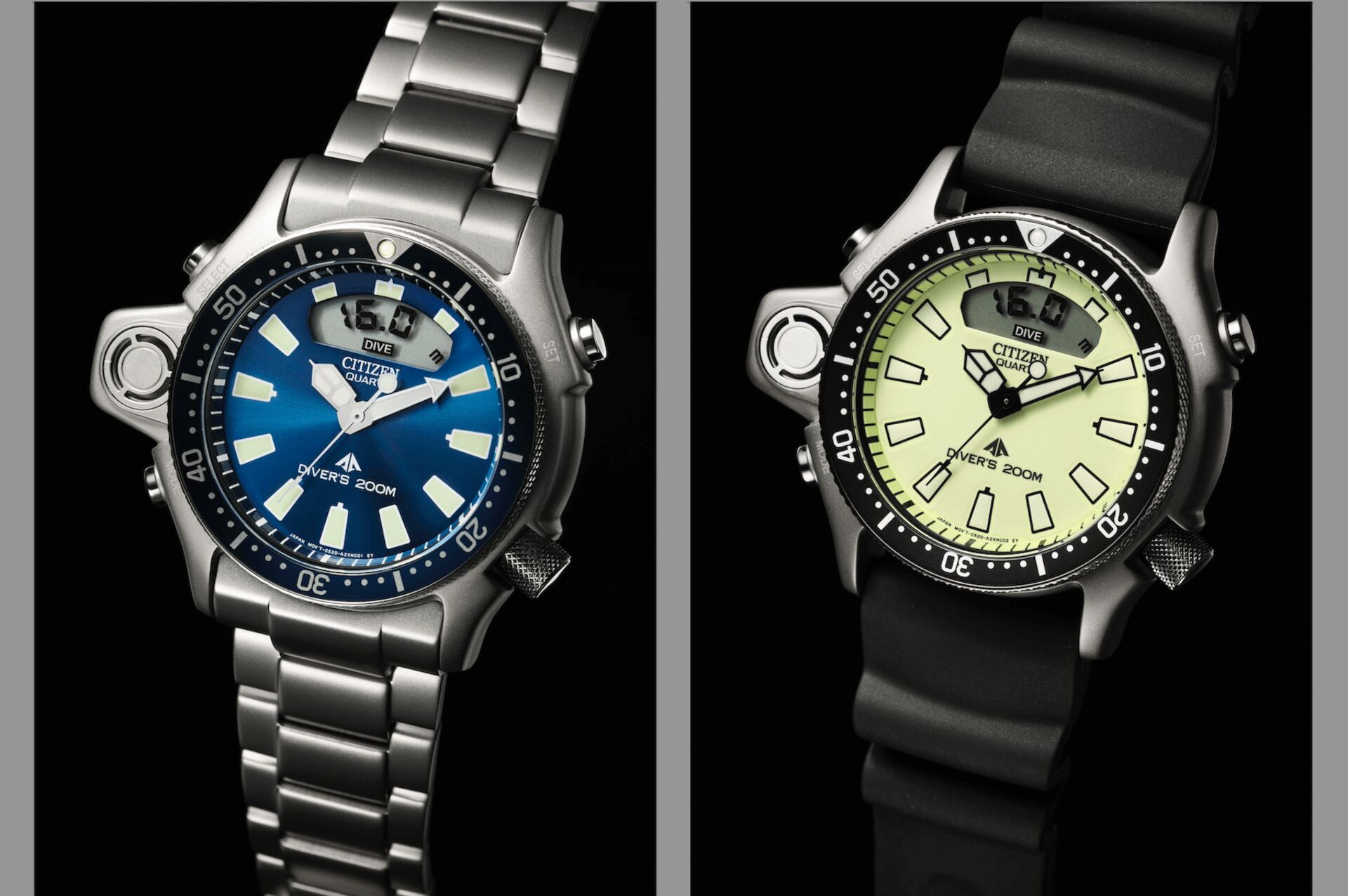 The two new Aqualand Depth Meter variants — JP2007-17W and JP2000-67L — have inherited all the original features from their predecessors. The electronic depth gauge protruding at 9 o’clock and the digital display aperture between 11 and 1 o’clock lend themselves to the iconic look of the Aqualand. So too does the crown, deliberately positioned at 4 o’clock to balance with the other pushers. What distinguishes the new looks are their dial colors, case finishings, and straps. 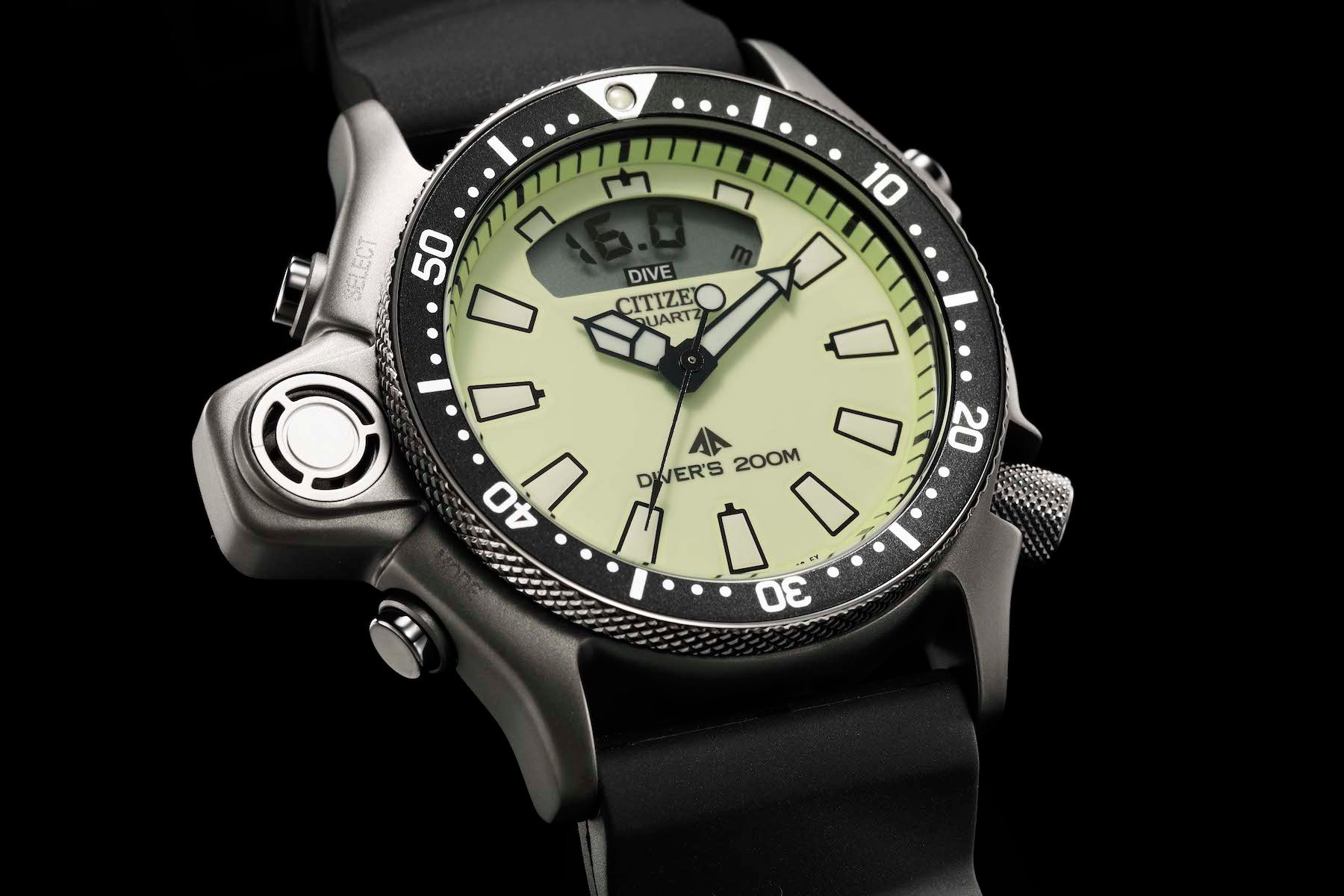 The JP2007-17W boasts a fully luminous dial that glows green. On top of it are twelve indices and three hands with a more bluish glow to ensure readability in low-light conditions. The case is constructed in stainless steel and treated with a gray PVD coating for enhanced durability. In a true tool-watch fashion, the strap is made of professional polyurethane. 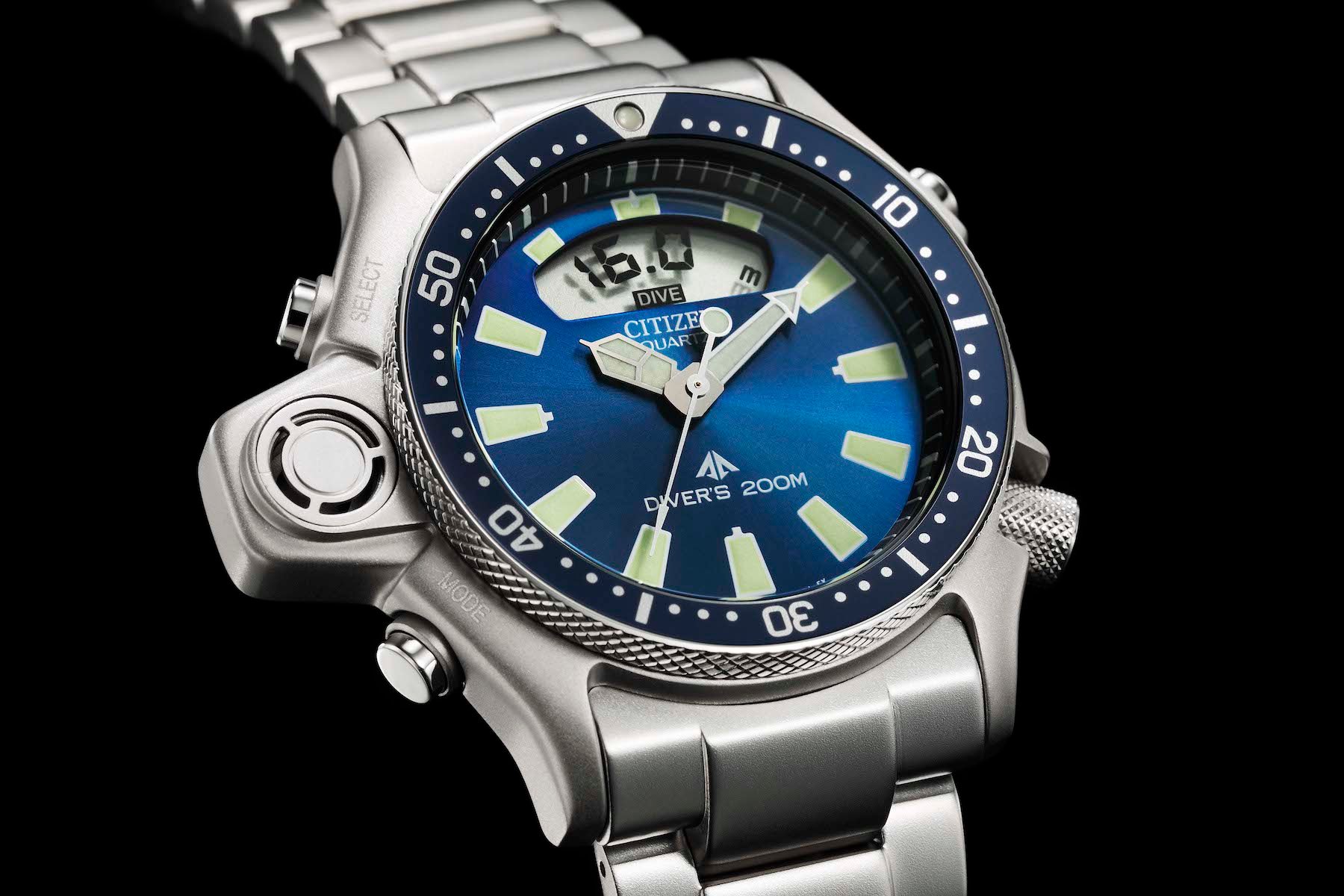 The JP2000-67L is the one that aims to bring a new vibe to the series. Citizen wants to add a “classy” look to the sports watch to go with urban attire. That idea materializes in the form of a stainless steel case with a matching bracelet and a sunray-patterned blue dial. The blue backdrop emanates different shades from different viewing angles.

Fret not — the integrity of a Promaster tool watch stays intact. Apart from the aforementioned depth meter, which shows the diver’s depth to 80m on the digital display, the Aqualand is fitted with a unidirectional rotating bezel. Its quartz caliber 520 supports a wide range of professional diving functions, such as a diving time monitor, a depth alarm, an ascent-speed warning, a low-battery alarm, a diving log, and even a chronograph that can count up to 60 minutes. Last but not least, the Aqualand Depth Meter is ISO-certified with a 200m water resistance rating.

When it comes to high durability and cult-classic design, Citizen has nothing more to prove with the Promaster Aqualand Depth Meter. Will the two new looks spark interest among fans of retro dive watches? I suppose you all can be the judge of that. The sporty lumed-dial JP2007-17W carries a price of €429. Those who prefer a blue dial and an all-steel look can pick up the JP2000-67L for €449.

For more info on Citizen, visit the brand’s website here.