The CODE41 X41 Aerocarbon — the 4th edition of the popular X41 series — brings something new to the table. With a case made from a high tech carbon fiber material, more commonly found in the aeronautics and aerospace industry. With this new material containing the brand’s proprietary caliber, the Aerocarbon hopes to be the latest success in the brand’s ever-growing catalog.

CODE41 has featured on Fratello in the past. As such, the team is very aware of the brand. Prior to writing this piece, I asked my colleagues for their opinions. They were decidedly mixed. And who can blame them? When watch brands push every ounce of energy they have into designing something that will stand out from the crowd, you have to be prepared to take the rough with the smooth. If, for example, you adore crisp, clean, Grand Feu enamel dials delicately pad printed with Roman numerals, this slice of industrial futurism is unlikely to float your boat. And that’s okay because the one thing a new brand doesn’t want to be is boring. And I can say without a doubt, that CODE41 and its core concepts are anything but that.

A revolution in progress

The first time CODE41 dropped on my radar was during the Kickstarter Campaign for the Anomaly -01. That was way back in 2016 but the brand had actually been in some kind of existence since 2008. The Anomaly was, especially at the time, a pretty exciting watch for the Kickstarter community. Consequently, it snared nearly 900 backers and more than half a million Swiss Francs en route to success. 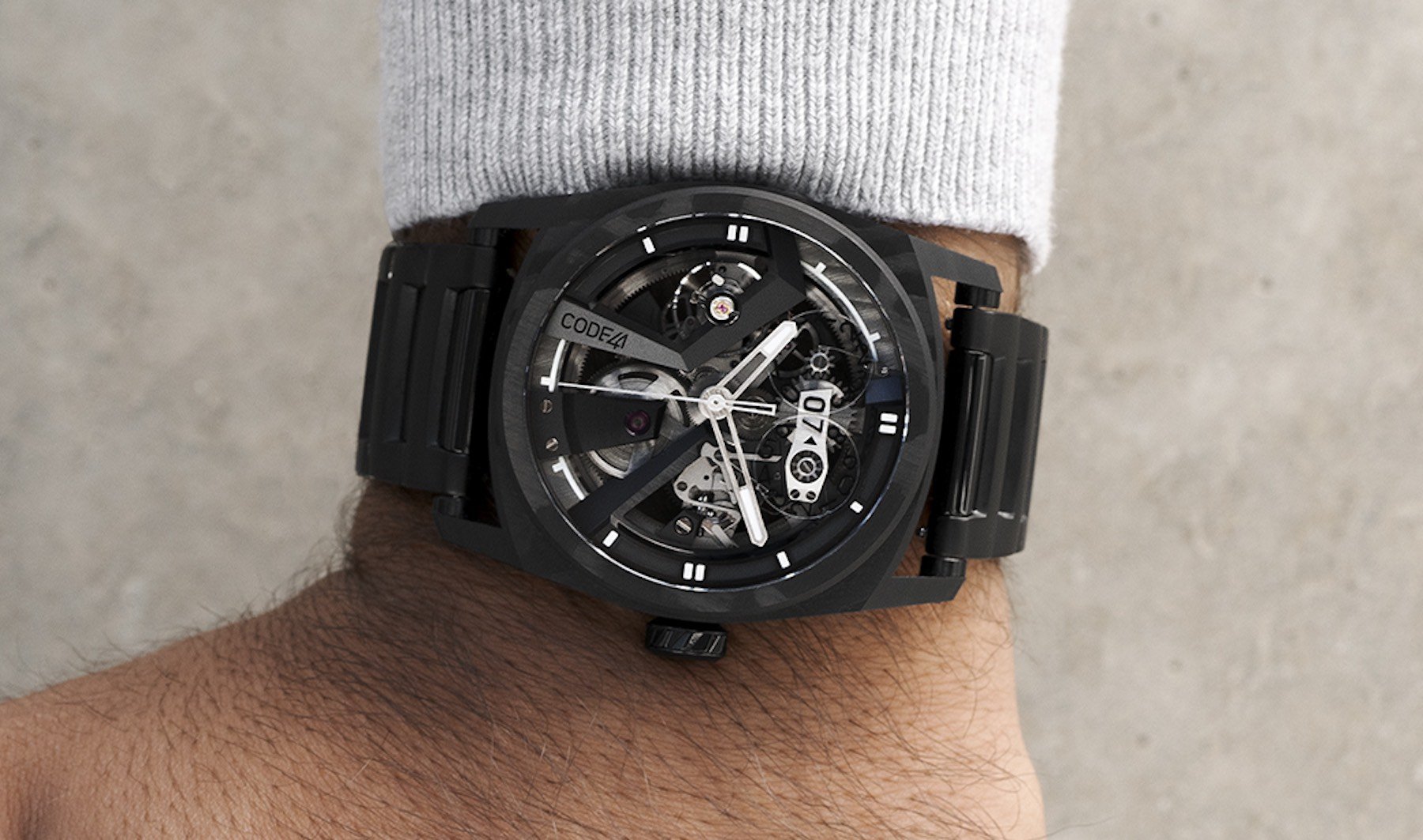 In my opinion, however, the true character (and vision) of CODE41 emerged with the debut of the X41 a couple of years later. Transparency had always been front and center of the brand’s mission statement, but now the watches themselves literally reflected that philosophy with a movement, unlike anything the brand had used before.

…at this price point, that’s intended as robust praise.

And, perhaps most crucially, the movement was like anything anyone had used before as it was created exclusively for CODE41. Yes, it has some avant-garde callbacks to brands like Hublot and AP. But at this price point, that’s intended as robust praise. The geometric bridges, the visible active components of the watch, and — without a doubt the coolest aspect of the design — the peripheral rotor weight, add-up to create a very interesting experience on the wrist. 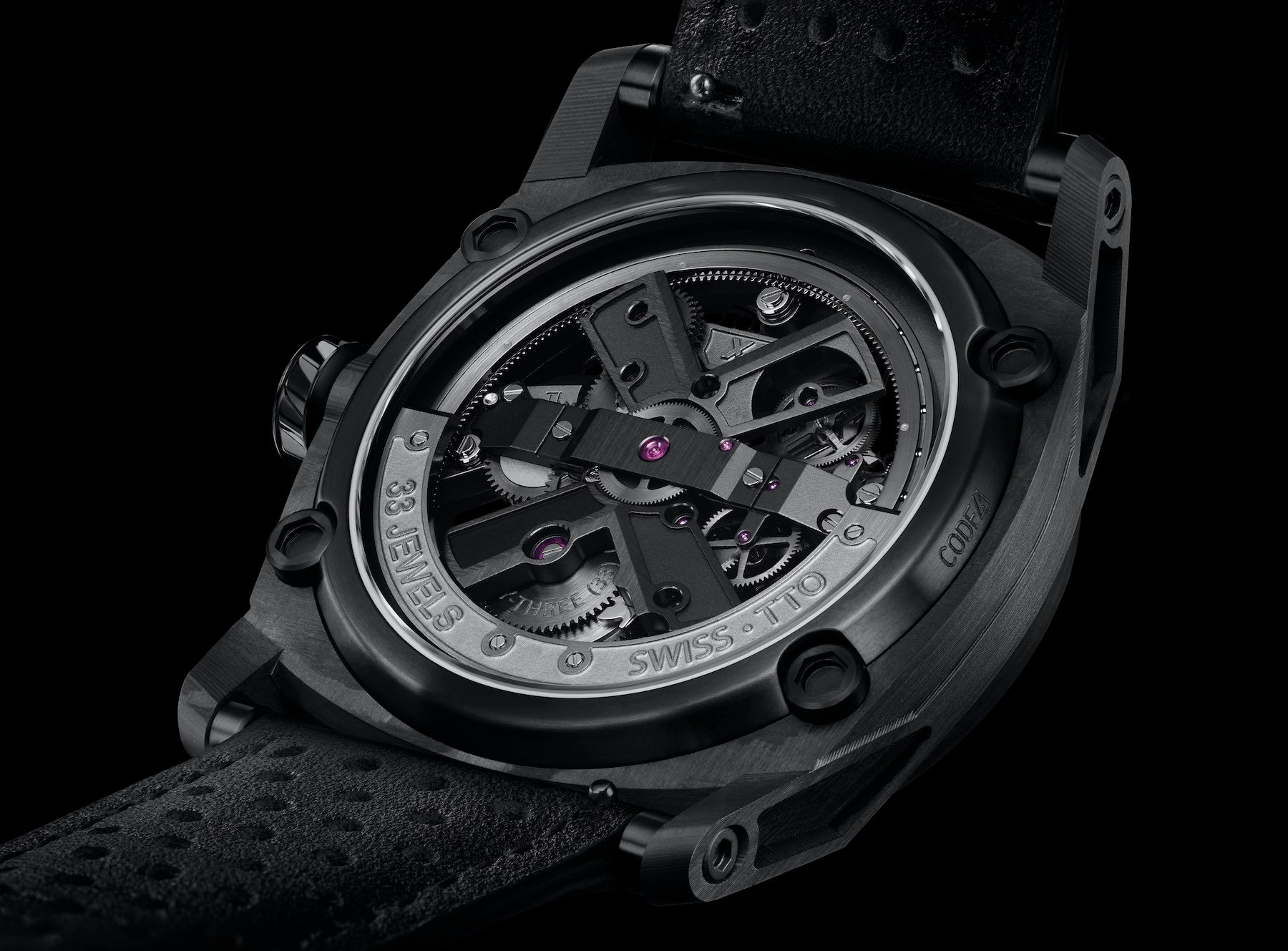 As far as I can see it, the latest edition of the CODE41 X41 will have its lovers and its haters. Some will see the value of the product and appreciate its transparency, while others will dismiss its novelty and shunning of tradition (in both style and practice). But it is really hard to grumble at the openness of the brand when it comes to its suppliers. Although some will view it with cynicism, the table provided by the brand on its website does give us an intriguing insight into what goes on behind the curtain, how funds are allocated, and what kind of margins brands expect to see. 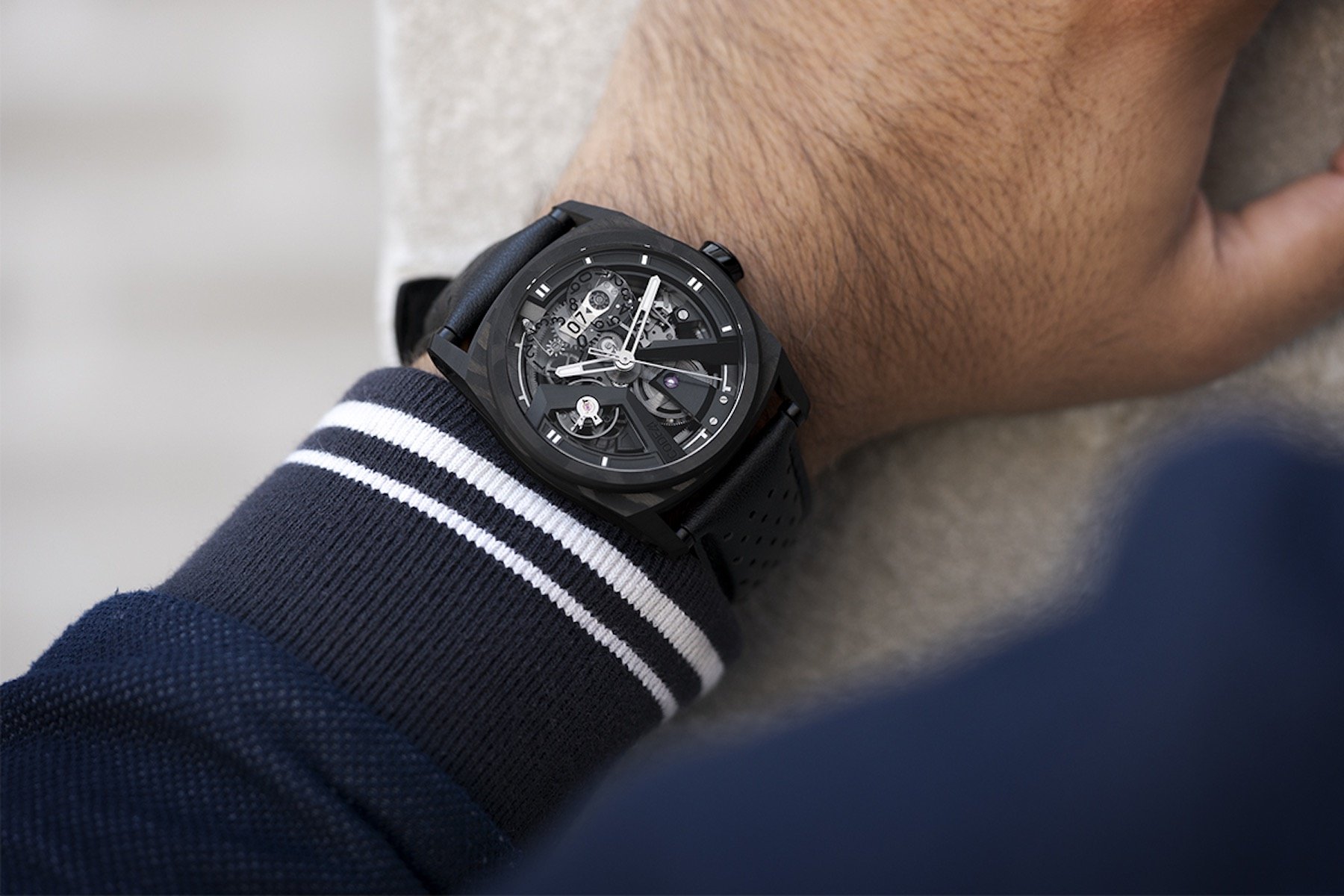 According to these figures, the pre-tax build cost of the CODE41 X41 Aerocarbon is €1,637. Refreshingly (for a small brand), the vast, vast, vast majority of the build cost has been allocated to the movement. €1,435, to be precise. That is 86.7% of the pre-tax total. While the cost of external components might surprise some readers, I can say from experience that these elements are not unusually priced. They are not even close to the cheapest of their kind I have seen. And while it may feel a little odd that such an expensive movement (and it is a relatively expensive movement) is wrapped up in components totaling just 13% of its cost, that is how things should be more often. 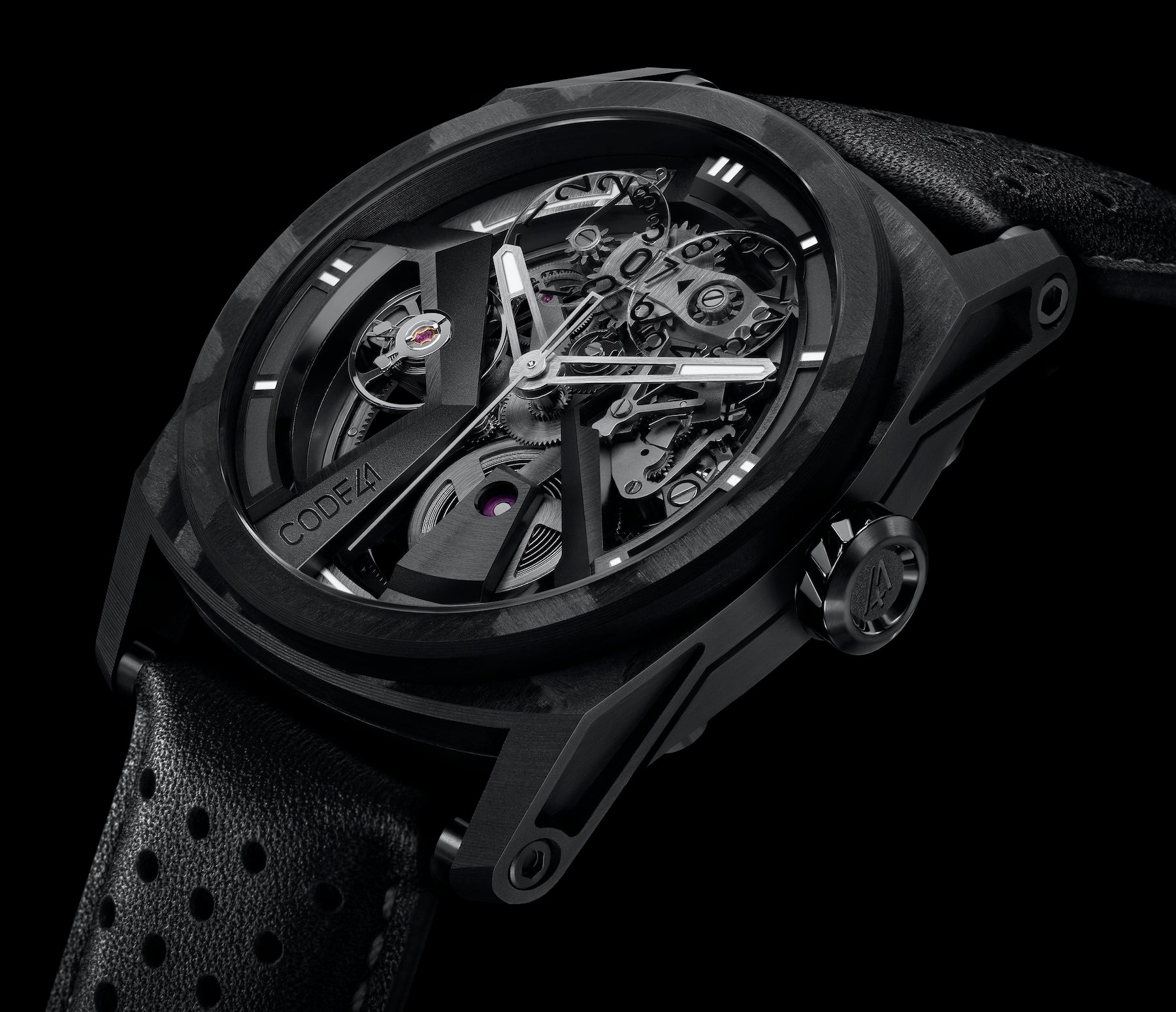 But with this kind of external/internal cost ratio, you could be forgiven for worrying that the aesthetics had been neglected. Well, that isn’t really the case given how CODE41 has chosen to display the information. The absence of a dial saves a huge amount of investment. Thus, the movement cost (as it also plays that role) suddenly looks a lot more reasonable. That is the aesthetic achievement of these watches. They are divisive and will not be for everyone, but they have arresting and engaging displays. 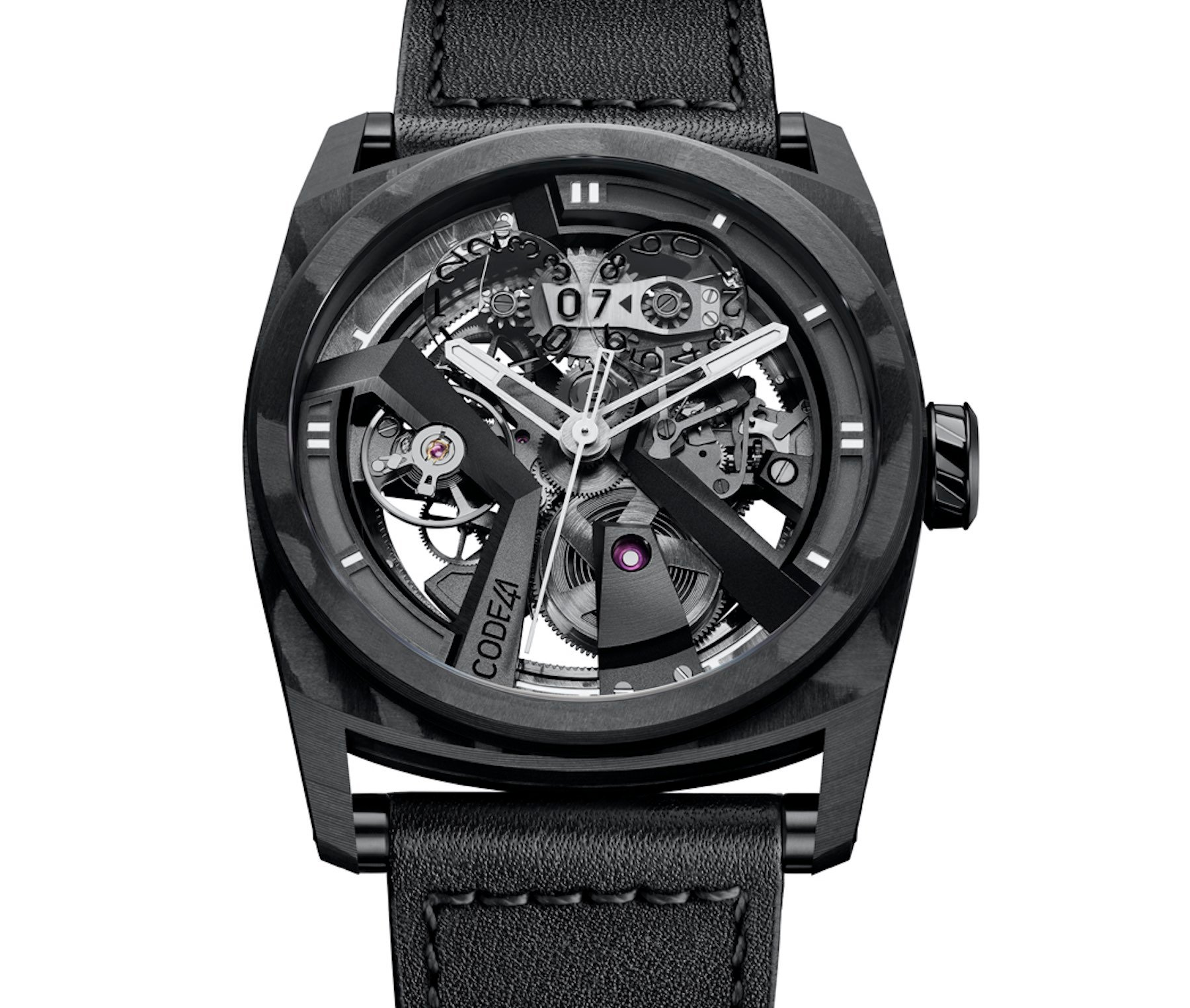 But what about this new case?

On the off chance that the dazzling display of the CODE41 X41 Aerocarbon wasn’t enough for you, we now have a high tech Aeronautic Carbon Fiber case to carry it around in. This material is twice as light as titanium and incredibly dense. The AeroCarbon case is topped and backed by scratch-resistant sapphire crystal. It measures 42mm wide with a thickness of 11.7mm and a lug-to-lug of just 48mm. That means the watch, which has an edgy, cushion-shaped silhouette should sit relatively comfortably on the wrist. For peace of mind, the CODE41 X41 AeroCarbon is water-resistance of 50 meters. Its retail price? $5,740. The pre-order period will run for another 10 days until 3 pm (Zürich time) on July 30th. Learn more about CODE41 here.