It’s not that I didn’t drink coffee last Monday. I just didn’t have a coffee in the office, but on a terrace in Rome. Nothing beats a cappuccino at Sant ‘Eustachio Il Caffè, which has been serving fantastic coffee since 1938 at Piazza di S. Eustachio. That’s the reason I skipped last week’s episode of Coffee Corner Watch Talk. Still, no matter how good the Roman cappuccino was, it’s also good to be back at the office to talk watches over a cup of coffee. Watches like a complicated IWC that’s reserved for just a few AMG One owners, but also a lime green, Miami Beach-ready Speake-Marin, and the bravest watch by the FDNY Foundation × William Wood.

You can’t buy the IWC Big Pilot’s Watch Constant-Force Tourbillon Edition “AMG ONE OWNERS” (Ref. 590502). Well, you can, but only if you first bought the Mercedes-AMG One, a hypercar that is basically a street-legal Formula 1 machine. The latest Big Pilot’s watch with a patented constant-force mechanism, which transmits even impulses of force to the escapement, is a technical tour de force, just like the car that it’s paired with. The tourbillon of the in-house caliber 94800 compensates for the negative influences of gravity, and the twin barrels provide this manually wound movement with a power reserve of 96 hours. The movement is placed inside a 46.2 × 13.5mm titanium aluminide (TiAl) case, a high-tech alloy with very high temperature resistance that is also used for components of high-performance engines in motorsport. That should be plenty of technical stuff to impress your colleagues with during your coffee corner watch talk. 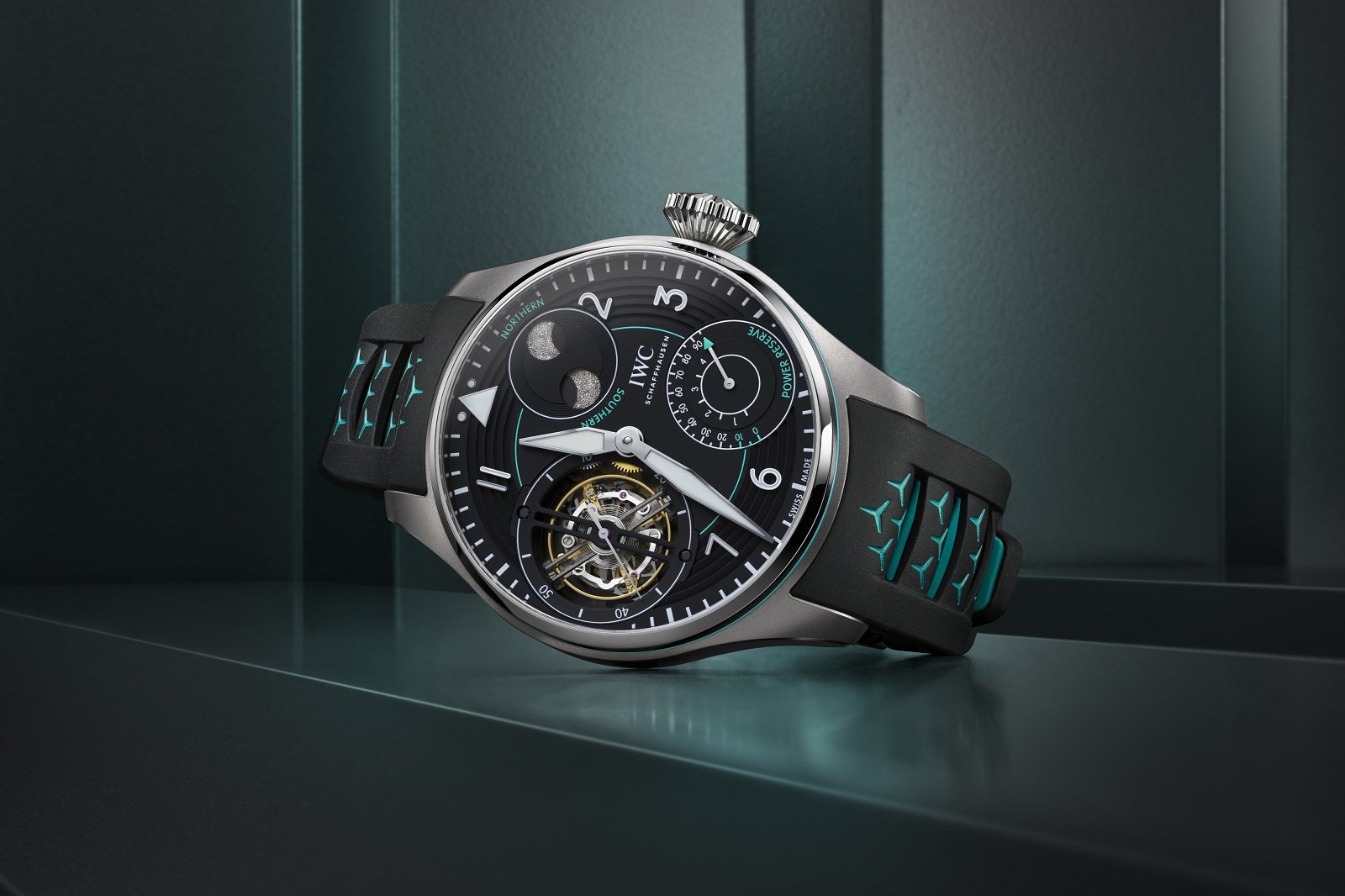 The IWC watch and the matching Mercedes-AMG One hypercar

To match the watch with the car, the IWC Big Pilot’s Watch Constant-Force Tourbillon Edition “AMG ONE OWNERS” shows the colors of the Mercedes-AMG One. The integrated black-and-green rubber strap is the most obvious link between the watch and the sleek, painstakingly developed car. One of the Mercedes-AMG One’s highlights is the V6 hybrid power unit that was developed together with F1 specialists. It has a total output of 1,063 horsepower, helping the car sprint to 100, 200, and 300 km/h in 2.7, 7.0, and 15.6 seconds respectively. And in case you’re wondering just how fast the Mercedes-AMG One goes, it boasts a cool top speed of 352 km/h.

Please don’t put down your coffee and rush to the local Mercedes dealer to order the hypercar. Unfortunately, that’s not how it works. Mercedes will find you. Just like IWC will find you after you’ve bought the Mercedes-AMG One for €3,522,400 (this is the Dutch price including taxes). And when IWC does, you will also find out about the watch’s price. Expect a price of around €250,000. Yes, the watch and car make for a hyper-exclusive duo. The car and watch hyperduo might be out of reach from a budget perspective, but you can see the car in action if you want. The Mercedes-AMG One’s public premiere will be at the Goodwood Festival of Speed, ​​which starts on Thursday, June 23rd.

You can find more info about the watch on IWC’s official website, and for more details about the Mercedes-AMG One, visit this website here.

What if you like green, but don’t fancy the blue-green shade of Petronas green you’ve seen above or a darker shade, like the Jaeger-LeCoultre Polaris Date? What if you prefer your greens a bit more bright, fruity, and tropical? Well, Speake-Marin just released the Dual Time Lime “Summer Edition” that screams Miami Beach, but would also look good on Copacabana or Bondi Beach. The good thing is that while you’re sunbathing on a tropical beach, you can still keep in touch with the colder home front because the watch has a dual-time function. That’s thanks to the caliber that’s a member of the SMA (Speake-Marin Atelier) family of in-house movements. The open-worked caliber SMA02 is made by Le Cercle des Horlogers and because the Dual Time Lime “Summer Edition” is part of the One&Two collection, there is a small seconds counter and a retrograde date indication at one-thirty.

The distinctly classic shape of the Speake-Marin Piccadilly case gets a modern touch of black DLC titanium. The DLC provides great scratch resistance, ideal for a watch designed for a sandy beach. The contrast between the black and the lime green can be seen to the best effect with sunglasses on, too. With your shades on, you’ll be able to fully appreciate the dual-time indication in black and lime green, as well as the heart-shaped, lime green lacquered hands. There’s a choice between a 38 and a 42mm version. Yes, #couplegoals indeed, but it’s also good to have a choice in general.

The 38mm version is limited to 10 pieces and to 18 pieces in the case of the 42mm Dual Time Lime “Summer Edition”. You can request the price at Speake-Marin’s official website. 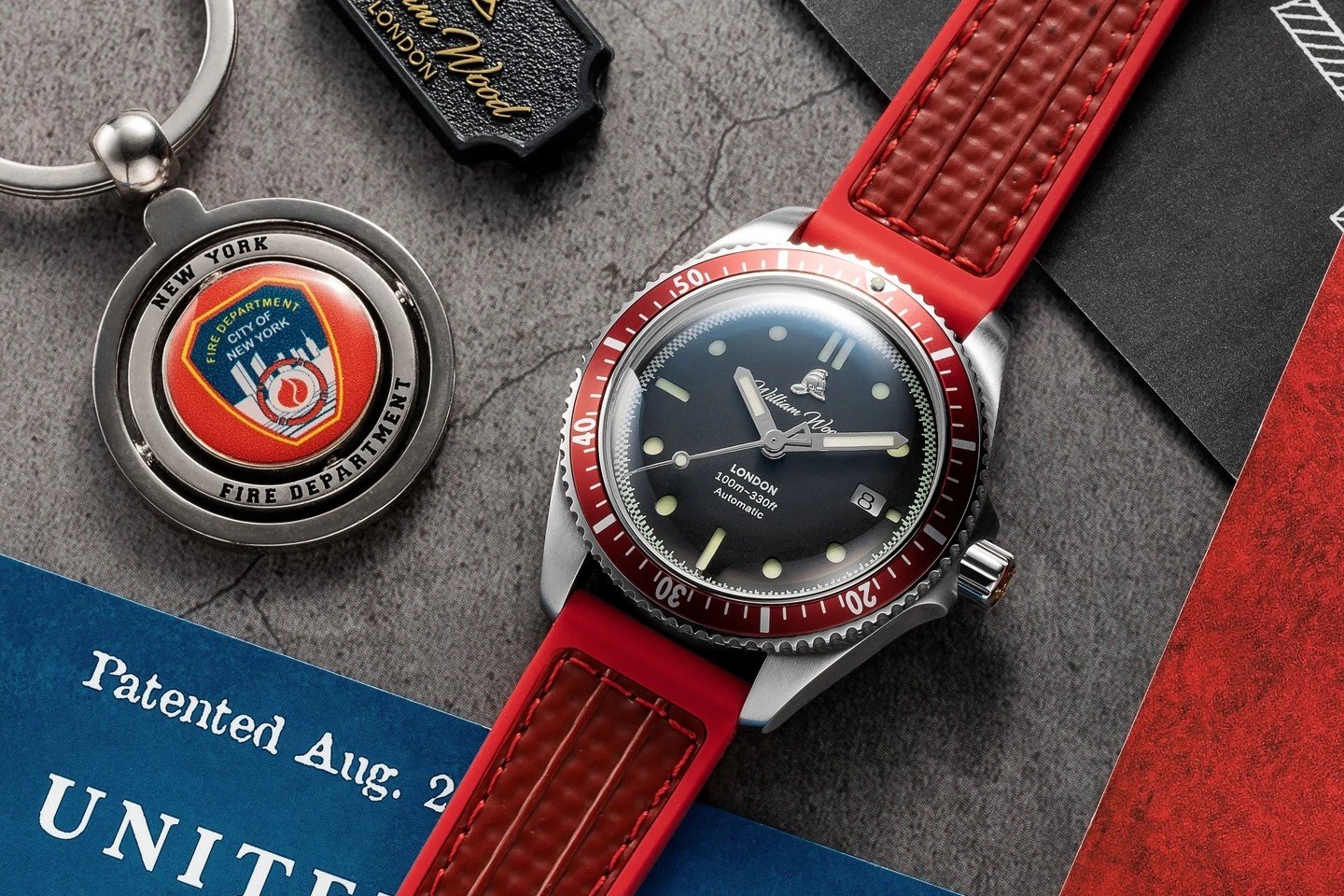 “The Bravest Watch” by the FDNY Foundation × William Wood

Even “hotter” than a bright summer watch is the piece that British brand William Wood made for the FDNY Foundation. That organization raises funds to assist the Fire Department of New York, and “The Bravest Watch” is a 250-piece limited edition that honors the FDNY. Each watch costs £800 / $1,000, and William Wood Watches will donate 15% of each sale to the FDNY Foundation. The money will support initiatives such as fire- and life-safety education. Inside the 41mm stainless steel case, you’ll find an automatic Seiko NH35 movement with 41 hours of power reserve. The case back screws down for 100 meters of water resistance and features a printed FDNY Foundation emblem as well.

Set into the crown, you’ll find a brass piece of a British firefighter’s helmet from the 1920s. The straps are made from genuine British fire hose that has been used in live fires over the last decade. To create the straps, differently colored hoses are cut, cleaned, and repurposed into watch straps. You have the choice between upcycled London Fire Brigade Red, West Midlands Fire Service Yellow, Tyne & Wear Fire Service Blue, British Army Fire Unit Green, and Fire Gear straps. 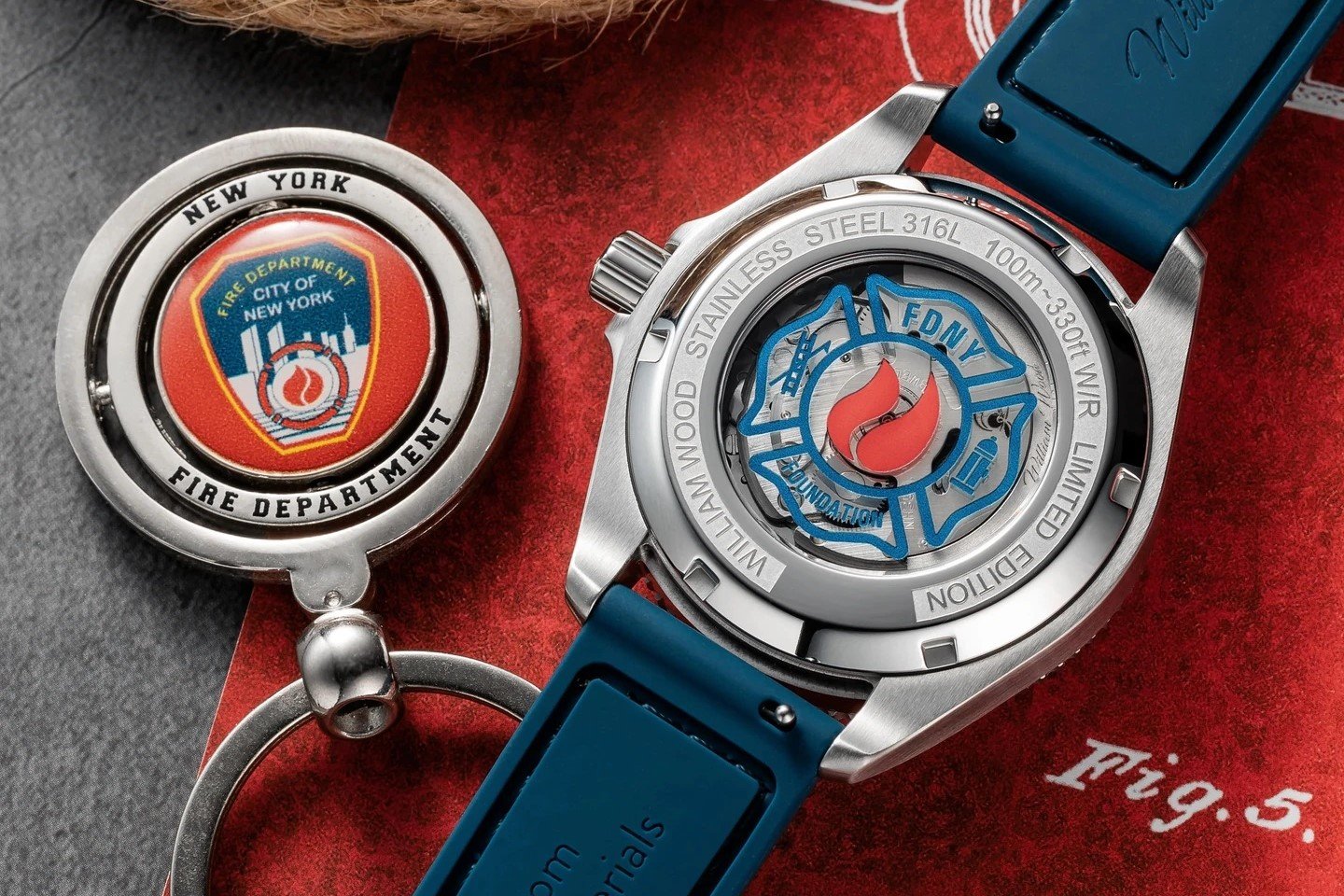 As is the signature of the William Wood brand, “The Bravest Watch” features plenty of nods to firefighting history. On the dial, there’s the William Wood logo, which is the side profile of a 1920s British brass firefighter’s helmet. The second/minute markers around the dial are the checkered markings off the side of a British Fire Engine too. Furthermore, the seconds hand of the watch takes inspiration from the chime of a vintage fire bell. And in case you’re asking why the brand uses a firefighter’s helmet, here’s the answer. William Wood was the name of the brand founder’s late grandfather. Fireman Wood served in the British Fire Service for over 25 years, winning commendations for his acts of bravery.

You can pre-order “The Bravest Watch” by the FDNY Foundation × William Wood from the brand’s website here. You can also first try on the watch at the FDNY Fire Zone Learning Center. “The Bravest Watch” is on display at the Rockefeller Centre, 61 W 48th St, New York, NY 10020. No appointment is needed. 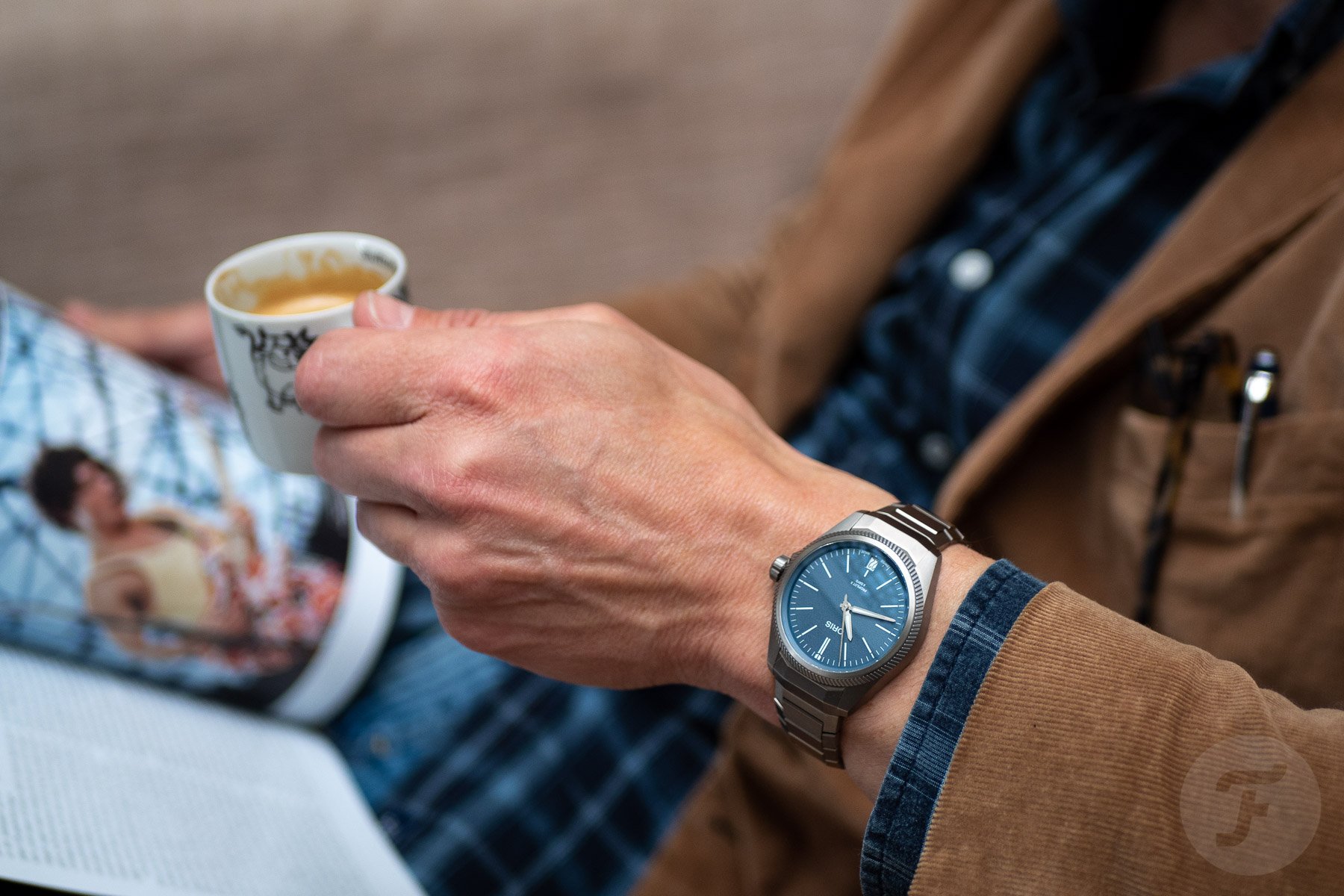 Writing Coffee Corner Watch Talk with an Oris on the wrist

On my wrist, you might have spotted the blue version of the Oris ProPilot X Calibre 400 that Sky already wrote a hands-on about. It’s a sharp watch in almost every sense. I do like the styling with its angular lines and shapes. It’s so easy to wear and enjoy it. Some say the dials are a bit flat and boring. But, as you might know, boring can be good — subdued design goes a long way. One of the major problems you could encounter, maybe sooner than later, is the fact that brushed titanium immediately shows even the tiniest of scratches. Just my two cents. 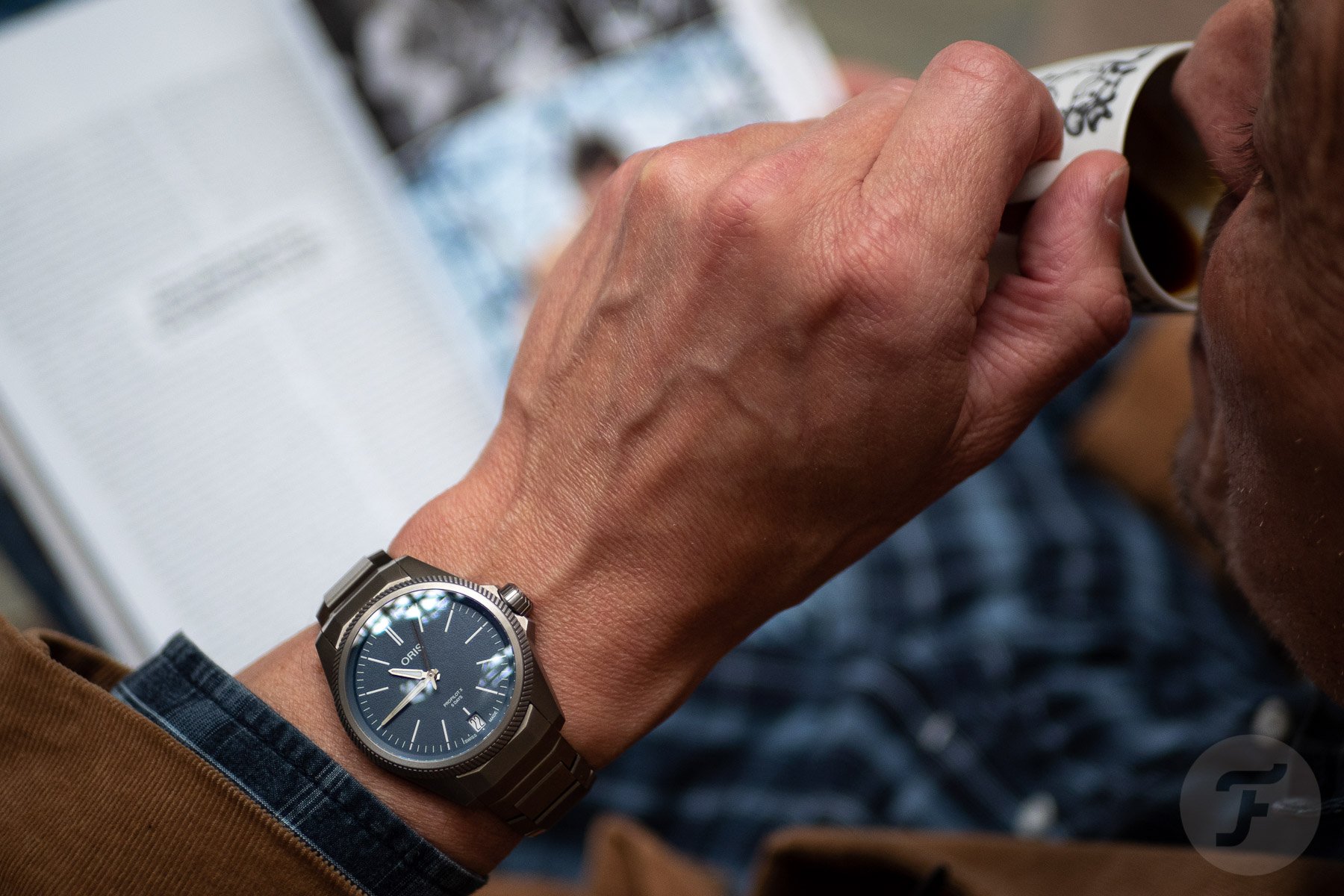 Please discuss the Oris ProPilot X in your coffee corner watch talk. And also don’t forget the exclusive IWC, the tropical Speake-Marin, plus “The Bravest Watch” by the FDNY Foundation × William Wood. Have yourselves a great watch week!