First off, when did Oris become such a fun brand? Hailed as a “Mechanical Joy Machine”, the ProPilot X Calibre 400 is designed to bring life and colors to the wrist. When I first caught sight of the three color variations — gray, blue, and salmon — my immediate reaction was, “I want them all.”

Let me clarify. I love a man who has the confidence to wear pink or any unconventional color. However, I am quite the contrary and habitually averse to choosing pastels for myself. The thought that I could see myself wearing any of these variants horrified me. Have I changed? Well, I still love the gray. Or do I have another personality, or two, that I never knew existed? 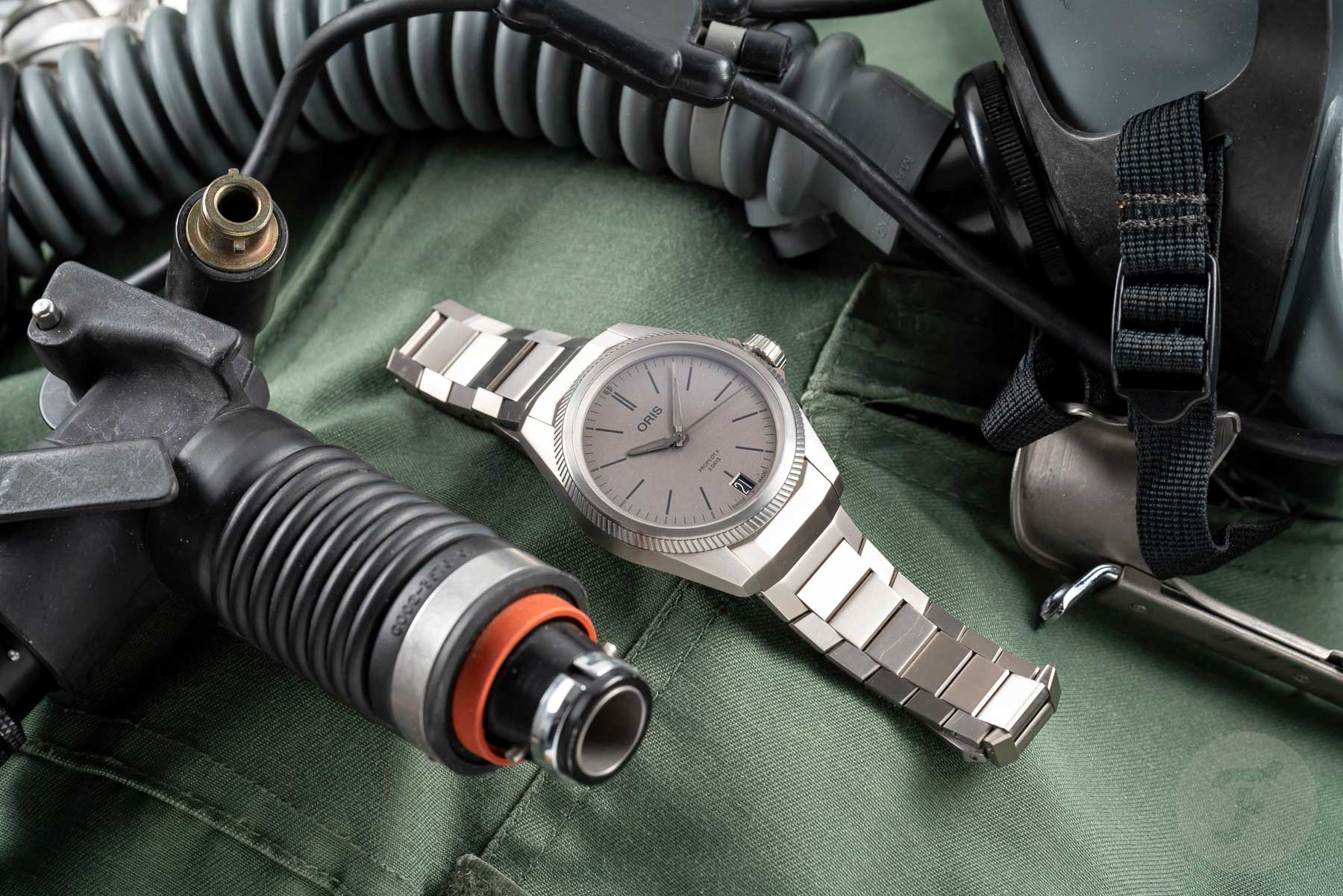 While I reluctantly looked for a psychologist’s number, I decided to delve deeper into these watches to justify “the other me”. Luckily, we have them in the office. And phew! I knew there were more about the trio that grabbed me on the subconscious level.

A legacy of pilot’s watches

Quite frankly, the ProPilot X Calibre 400 is almost unrecognizable as a pilot’s watch. But if you’ve been around the watch world long enough, you may have heard a saying: “To break the rules, you must first master them.” Oris started making its iconic Big Crown pilot’s watch in 1938, and arguably made its first wristwatch for pilots in 1917 (according to Brandon’s diligently researched and enlightening brand story of Oris). 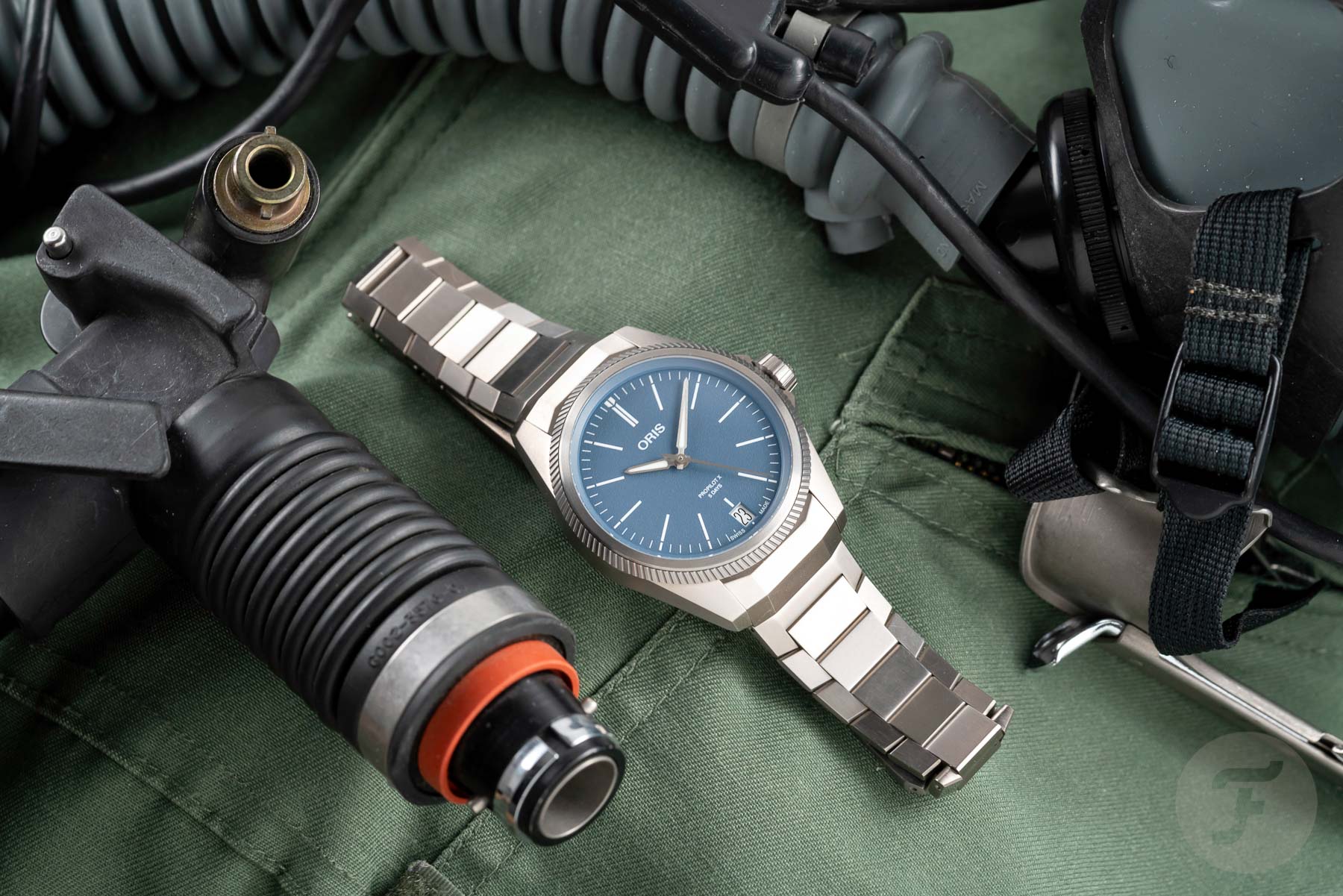 A century, give or take, may just be long enough to master this genre. Duly so, the independent Swiss watch company set about to create a contemporary aviation watch to rip up its own rule book. What it did next took the market by surprise. In 2019, Oris revealed the ProPilot X in a high-level execution that presented a new style for the genre.

The statement piece not only showcased the Swiss manufacture’s capabilities, but it also catapulted the brand into the high-end category. Three years on, just as we had resigned to the thought that the ProPilot X might be a one-off, Oris dropped us another bomb. The brand has announced the birth of three ProPilot X babies who bear very little resemblance to their big brother. 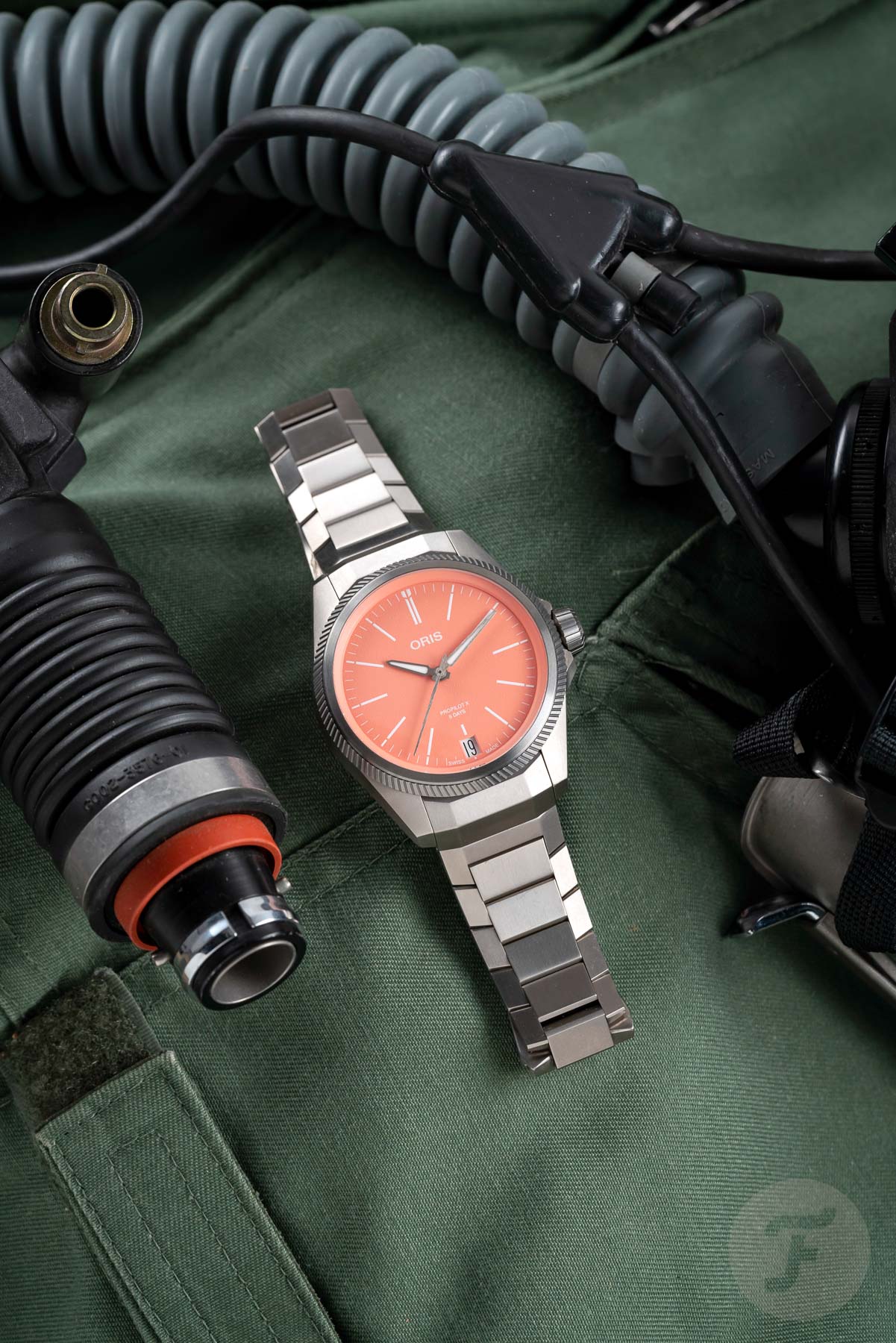 The joy of the new ProPilot X

The newborn comes in a smaller size of 39mm, the most moderate of all ProPilot models. Its lug-to-lug measures a decent 47mm, while the thickness is a lean 11.8mm. Hurray, finally a watch that would fit a lot of wrists and not look stupidly large on me! The case and bezel take after the original ProPilot X’s angular titanium form, with a satin and sand-blasted finish. This raw and technical look is complete with a faceted titanium bracelet, equipped with beautifully integrated end links and the Oris patented “LIFT” clasp. 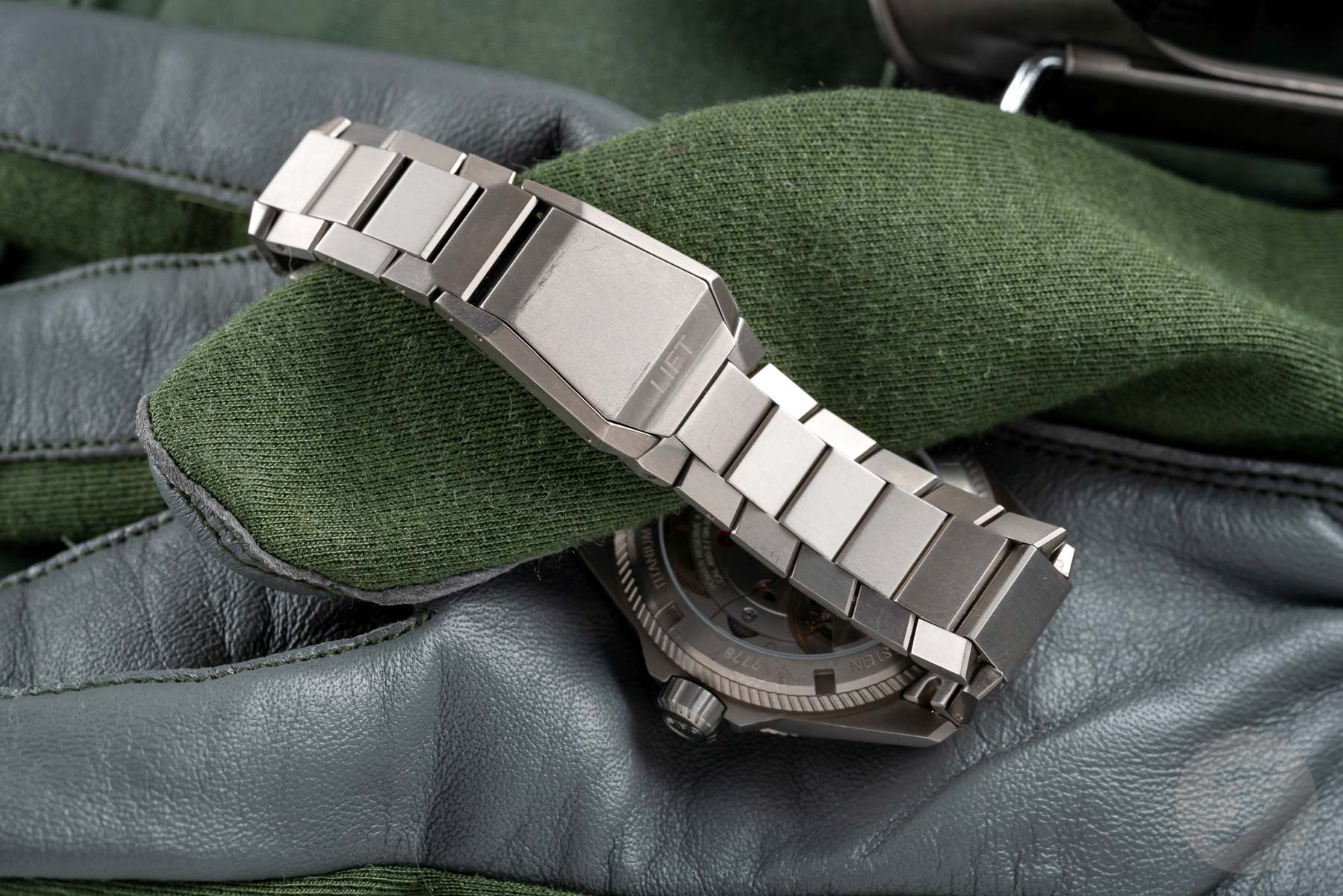 The ProPilot X Calibre 400 has inherited some of the intrinsic design elements that define an Oris pilot’s watch. Instantly recognizable traits are the case shape and the signature knurled bezel, inspired by jet engine turbines. The oversized screw-down crown is also a nod to the Big Crown ProPilot, and now flanked by protectors.

The dial, however, is a different story. It is a brand-new design that is very simple and void of decorative fanfare. The matte surface has a slightly grainy texture, printed with thin lines for the hour and minute markers. The hands are svelte and filled with lume in a matching color. Gone are the Arabic numerals, and the date window has been repositioned at 6 o’clock. The whole face is very clean and nicely complementary to the industrial look of the case. 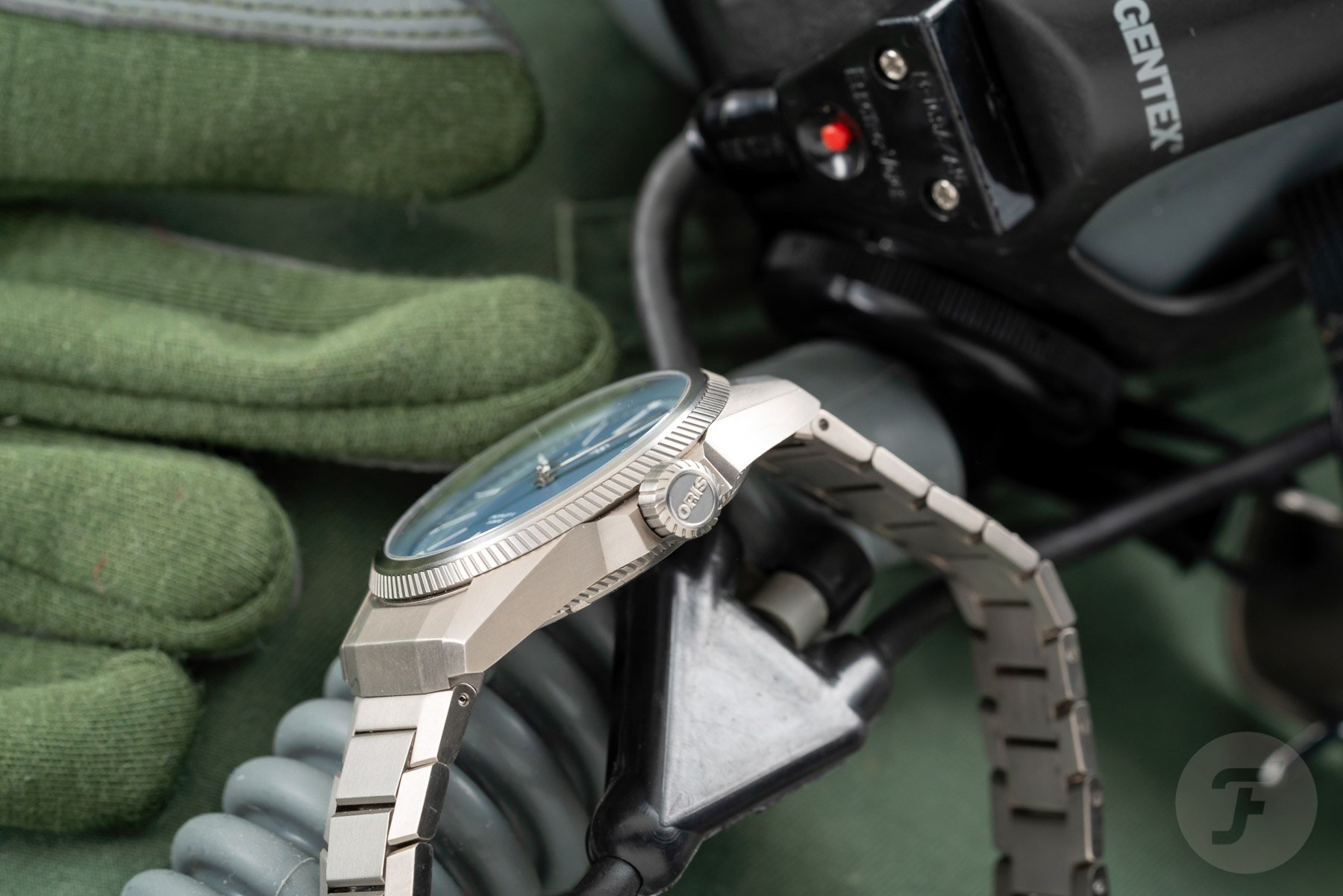 To top things off, the ProPilot X Calibre 400 also marks the very first ProPilot to use the proprietary movement introduced by Oris barely 18 months ago. Flaunting through a large sapphire crystal case back in its full glory, this landmark self-winding Calibre 400 was entirely conceived and developed by the company’s manufacture in Hölstein.

The Calibre 400 series has come to define “The New Standard” for Oris in its mechanical prowess. In watch-layman’s terms, that means it offers the ProPilot X better accuracy, stronger magnetic resistance, higher durability, and a five-day power reserve. A more robust engine translates to a 10-year warranty and servicing the watch every 10 years as recommended by Oris. 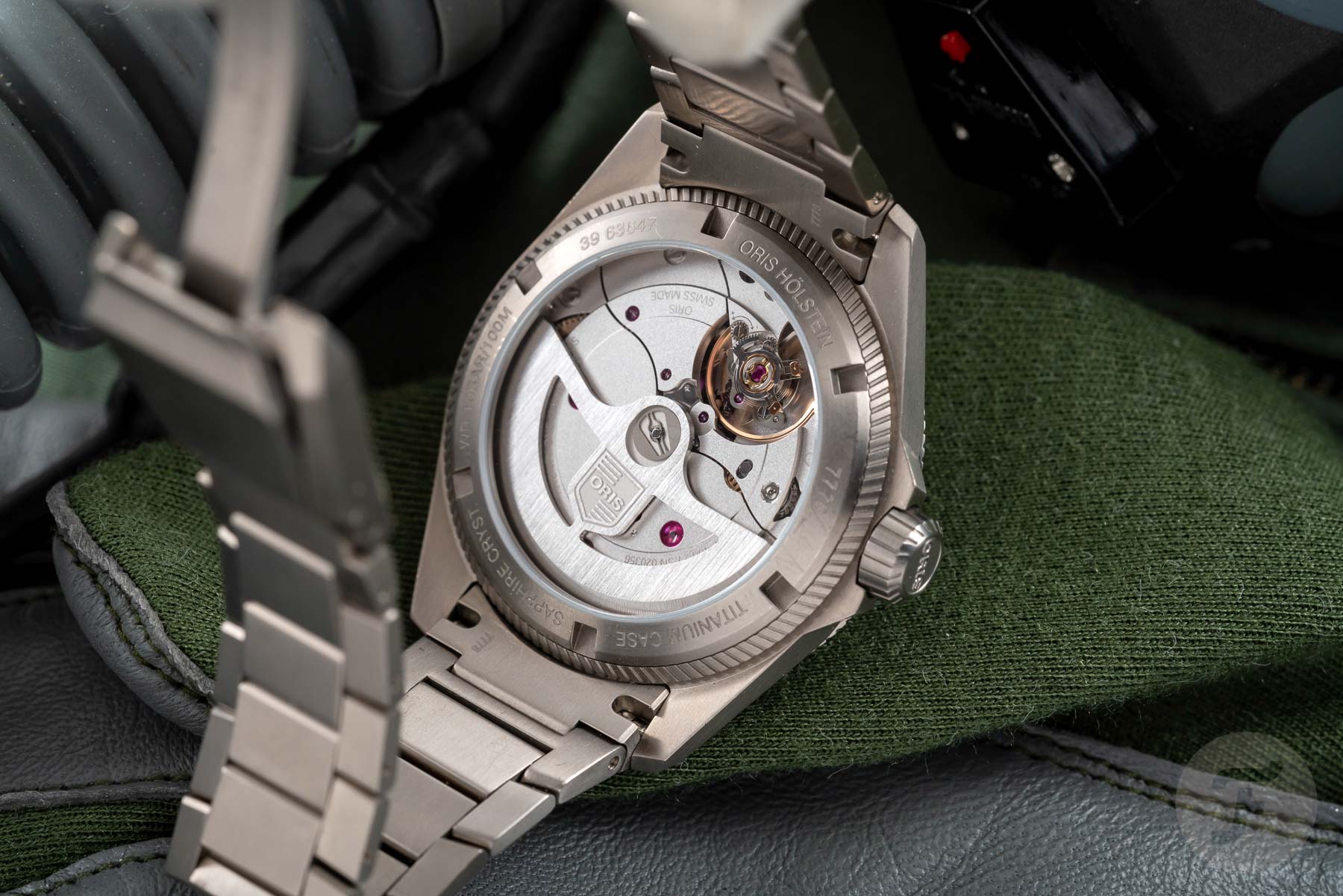 In technical terms, Oris engineered this new generation of movements with modern lifestyles in mind. Our increasing exposure to magnetic forces these days subjects our mechanical watches to potential malfunction. To counteract this, Oris has used more than 30 non-ferrous and anti-magnetic components in the Calibre 400 series, including a silicon escape wheel and a silicon anchor.

Invention at its core

Another common mechanical issue in an automatic movement occurs in the ball-bearing mechanism that enables the rotor to spin. The oscillation generates power but, over time, also causes natural wear and tear in the components. Oris has instead used a low-friction slide-bearing system, in which a metal stud runs through a lubricated sleeve. This invention is much less complex and highly efficient, making the Calibre 400 series less prone to breakdowns. 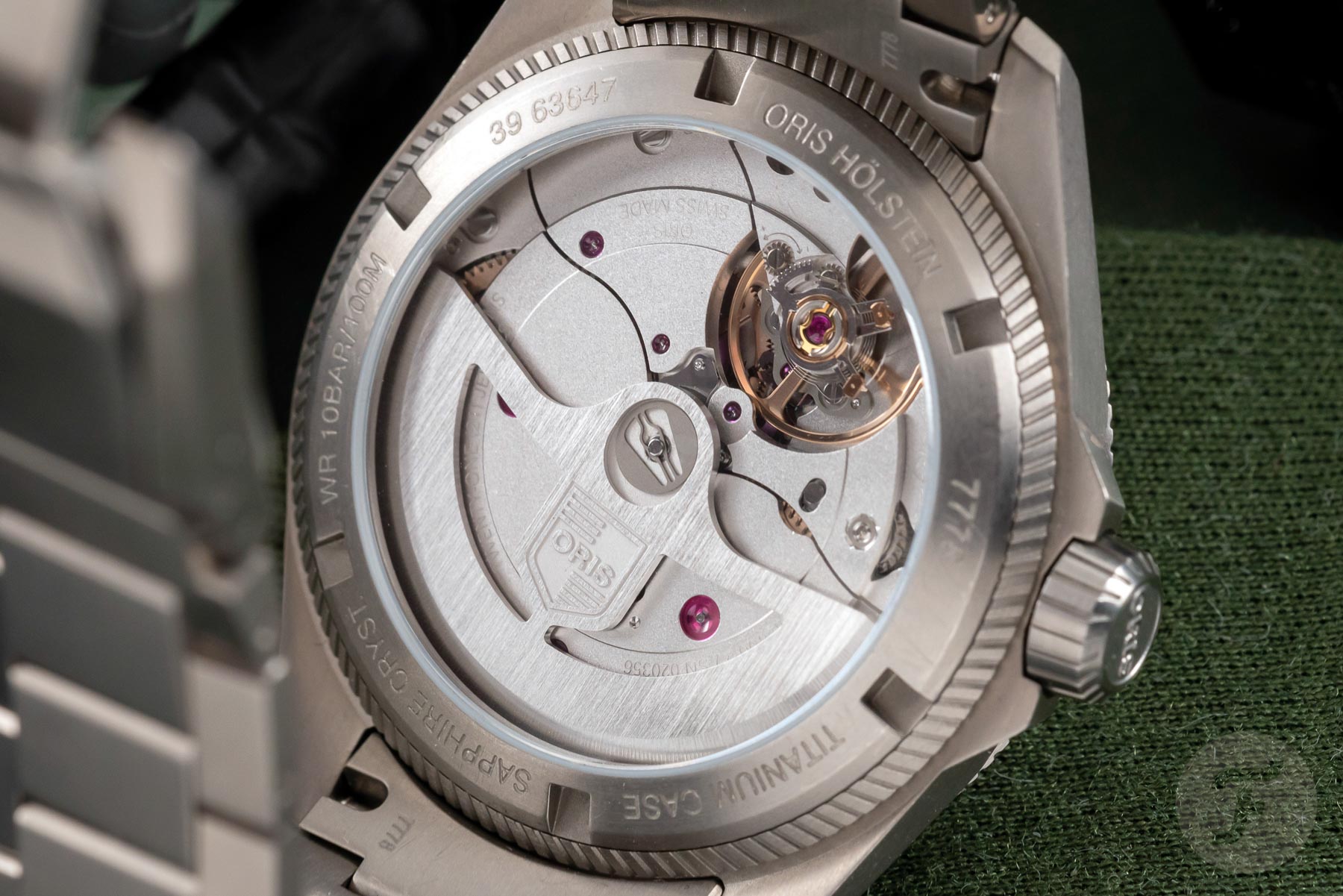 Armed with a more stable rotor system, Oris figured the new movement should store more power in an extended mainspring by housing in not one, but two barrels. With the watch off of the wrist, the double-barrel will keep the ProPilot X ticking for up to five days. Now, this may not be a ground-breaking feature, that’s true. It is certainly a thoughtful one, though, given that nowadays, very few of us keep the same watch worn and wound every day.

All that has packed a considerable punch, as you would expect from the value-oriented brand. The ProPilot X Calibre 400 will set you back €3,900 including VAT. Compared to the debut model, this is a very approachable package, allowing more of us to enjoy the ProPilot X line. It is a progressive and modern take on the pilot’s watch, and I’m sure many enthusiasts can appreciate that.

Now there is only one topic remaining. If we are all sufficiently convinced that my personality complex is an non-issue after all, let’s talk about the colors. After some hands-on time with the trio, I am still certain about the palette of gray, blue, and salmon, but maybe less certain about each of them on their own.

The gray offers a sleek monochrome look with a slightly darker dial color than the titanium body. The dial printing and date wheel are black whereas the date is white. I am not sure how I would like it better, but I wish the date wasn’t in a stark-contrast white. 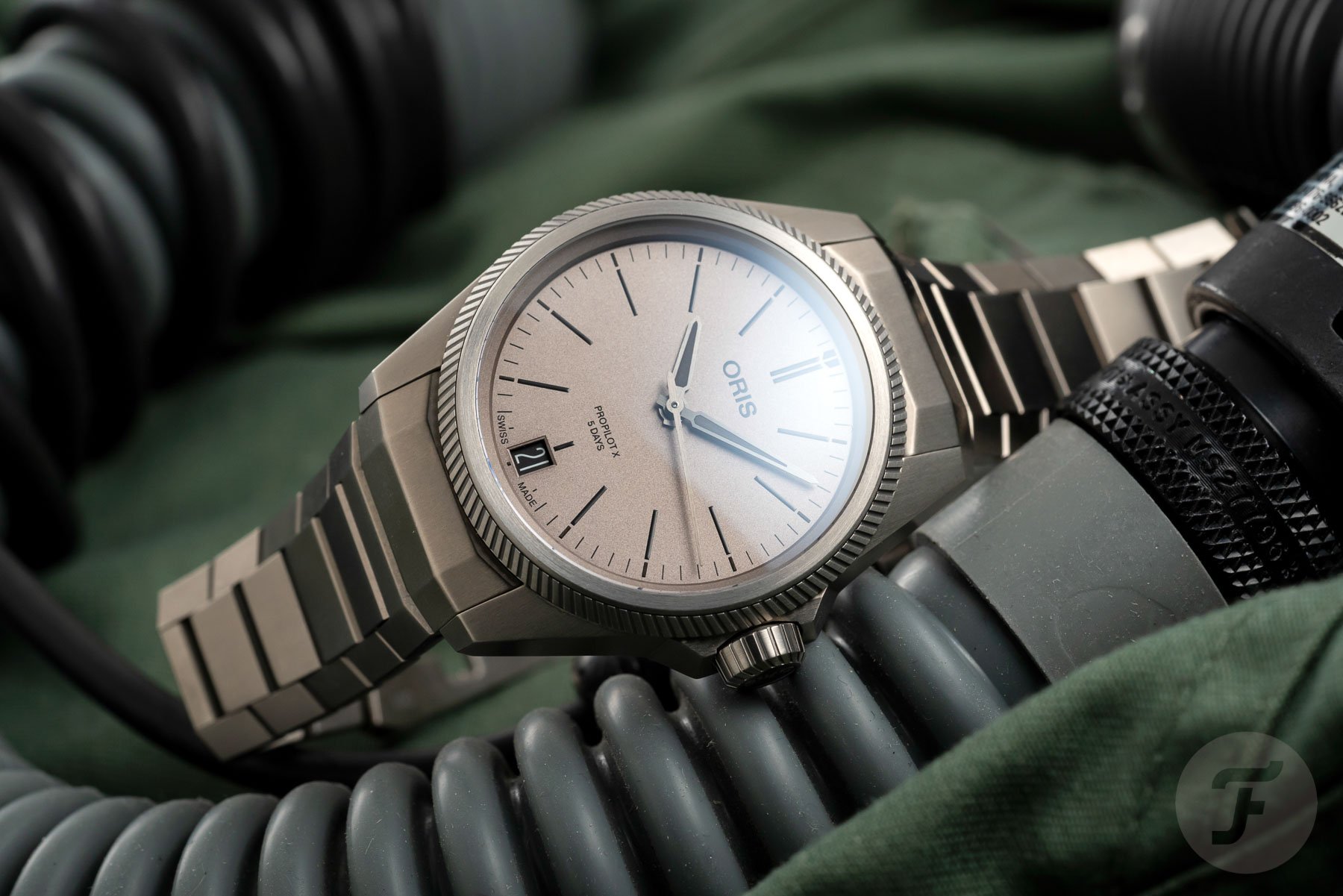 Blue would usually be quite an ubiquitous color that I would avoid like the plague. However, the blue here has a very unusual shade. It actually gives off a very fresh and up-to-date feel, especially matched against the white dial printing and date wheel. It’s the most harmonious of the three. The salmon, on the other hand, is vibrant and jolly. It’s actually more of a light, orangey pink. I can certainly think of occasions on which I need a splash of fun, and I can imagine that it would be a joy to wear then. 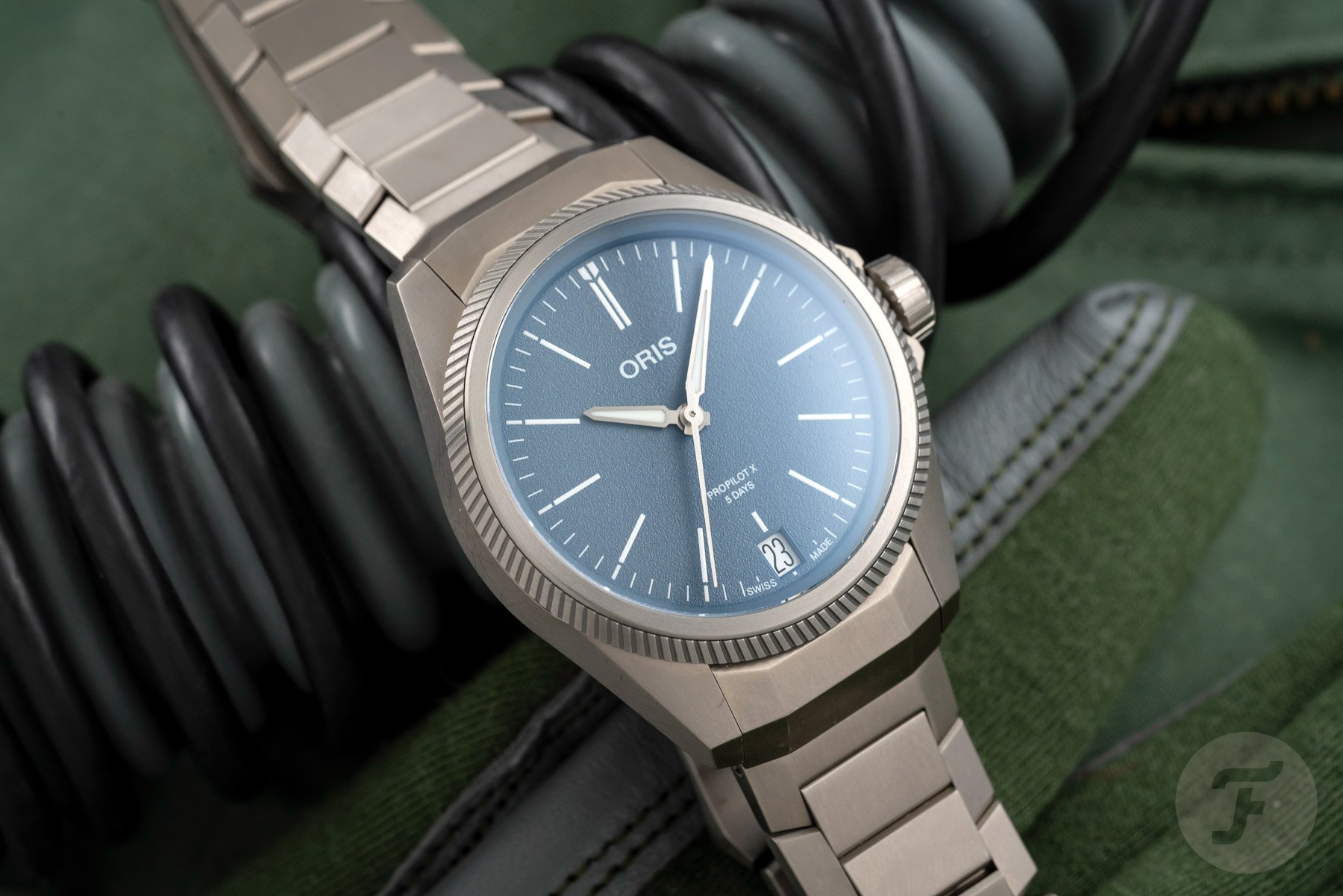 Did I say Oris was fun?

For a company that only makes mechanical watches, Oris is remarkably in tune with the digital generations. For the ProPilot X Calibre 400, the brand has created a dedicated game, The Joy of Mechanics. The game is available on desktop or as an app download. It is a digital adventure that takes you through a fantasy world of the spiraling inner workings of a Calibre 400 movement and a colorful ProPilot X universe. Players can register their scores and will have the opportunity to enter a drawing. Prizes include an all-expenses-paid trip for two to the home of Oris in Hölstein and 50 of the Oris Bear sweaters. There are a few conditions, but anyone over the age of 18 is welcome to play, anywhere, any time. Entry into the drawing is open until midnight Swiss time on July 20th, 2022. The winners will be informed on July 30th. You can find more information here: https://play.oris.ch/en/.

To learn more about the ProPilot X watches, follow the link to the Oris site here.