I learned something while putting this column together. I knew that December 26th is Boxing Day in some countries, but thanks to the Encyclopædia Britannica, I now know that in Great Britain and some Commonwealth countries, particularly Australia, Canada, and New Zealand, Boxing Day is a holiday on which servants, tradespeople, and the poor traditionally were presented with gifts. Think Tudor watches, not Rolexes — sorry, I just couldn’t resist. In the 21st century, Boxing Day is now a day associated with shopping and sporting events. But in non-Commonwealth countries such as the Netherlands, but also Poland, Romania, and Iceland to name but a few, December 26th is called the Second Day of Christmas. In any case, it’s a good day to have a coffee and talk watches — complicated and creative watch creations by CODE41, Girard-Perregaux, and De Bethune, for instance.

If you’re not familiar with the Second Day of Christmas, this day is all that remains of the traditional Christmas celebration that lasted for 12 days from December 25th (Christmas Day) until January 6th (Epiphany). Epiphany commemorates the three wise men visiting Jesus, according to the Bible. And the 12-day feast period reflects the winter festivals in Europe during pre-Christian times. The Second Day of Christmas on December 26th is now the only remnant of that long feast. And that’s because, in the church calendar, December 26th is Saint Stephen’s Day. Saint Stephen, the first Christian martyr, lived around the same time as Jesus, and he supported and aided widows within the church community — in a way, he handed out gifts to people in need as if it were Boxing Day. But despite his good-doings, he was tried for blasphemy and stoned to death. 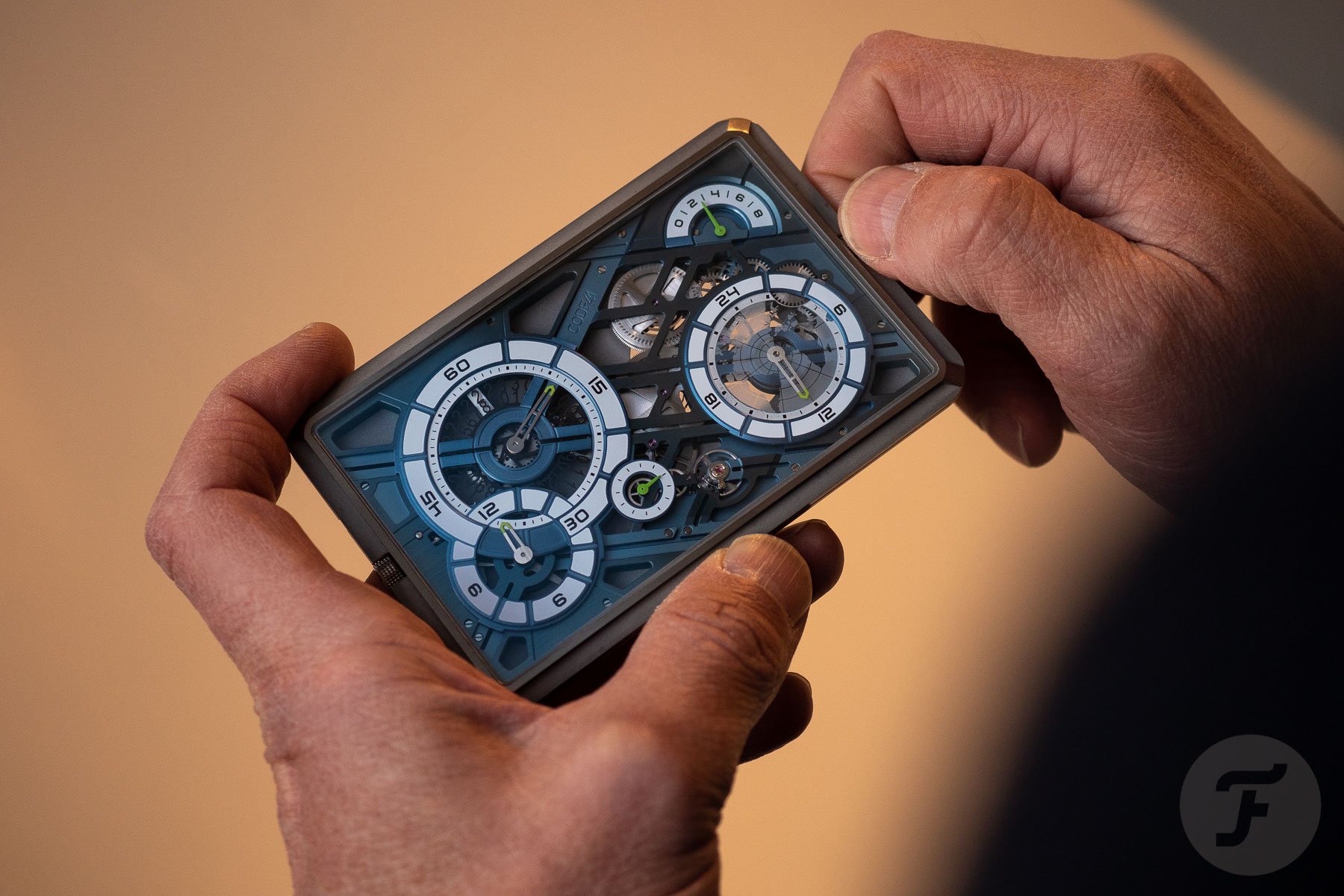 Speaking of blasphemy, is wearing a pocket watch in this day and age, the age of the wristwatch, blasphemous? It probably isn’t because the pocket watch is now a harmless artifact and is no threat to the wristwatch market. CODE41 created a surprising, heartwarming, and non-archaic pocket watch that doesn’t rival wristwatches but complements them. The titanium Mecascape Sublimation One — the name combines “mechanical” and “landscape” — takes the traditional concept of the pocket watch and reshapes it so that it fits in the world of today. 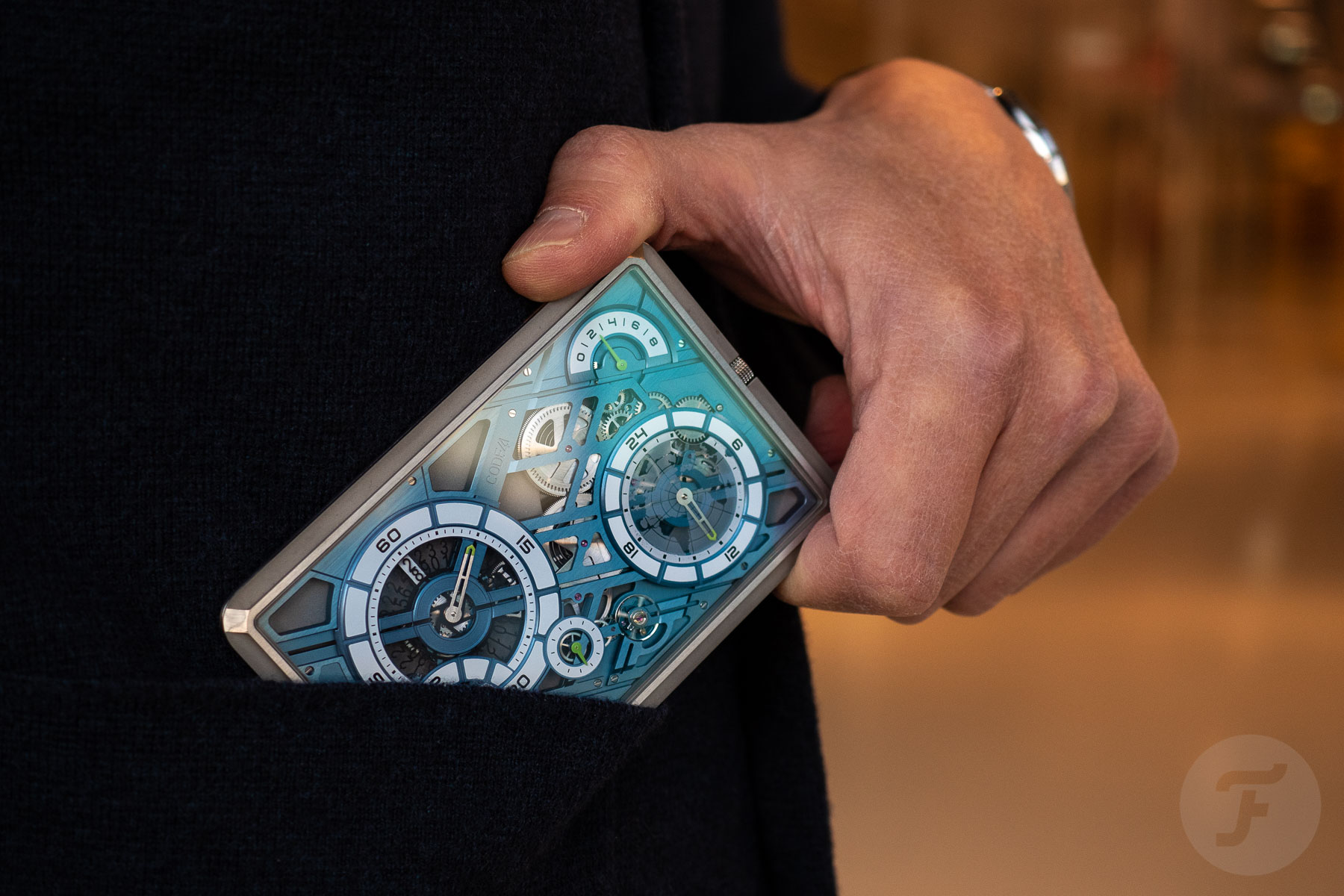 The result is the Swiss-made, 237-part CODE41 Mecascape Sublimation One in a titanium case with balanced proportions based on the golden ratio. The Mecascape’s 98 × 60mm dimensions are smaller than that of a 131.5 × 64.2mm iPhone 13 Mini, meaning you can carry it in the same way you haul your smartphone around. 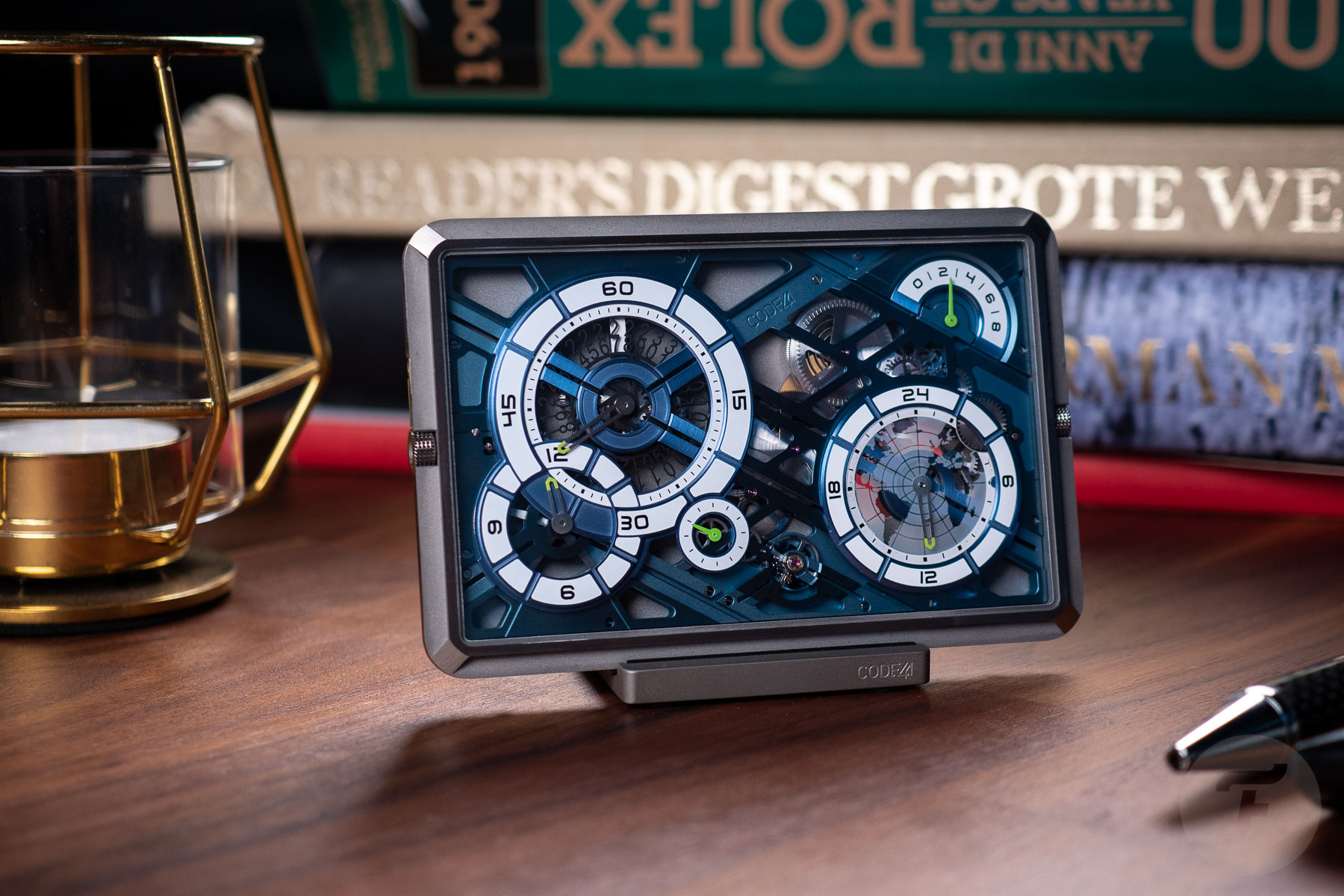 A mechanical landscape on your desk

The Mecascape Sublimation One is a mechanical spectacle you can put away in your pocket, but you could also put it on the special stand that turns the pocket watch into an original and fascinating desk clock. This is why CODE41’s founder Claudio D’Amore used the word “landscape” in the name of the time device. Everything is exposed in the Mecascape. The different counters tell the time in a spacious way, and the different indications are connected by a complex set of straight bridges holding the gears in place.

The timepiece’s workings and layout have a hypnotizing effect that your eyes keep wanting to come back to. Its 39-jewel 4Hz movement needs to be wound by hand. On separate dials, it shows hours, minutes, and seconds, plus it has a 24-hour GMT display and an indicator to keep track of the Mecascape’s eight-day power reserve. A date indicator also sits below the 60-minute mark on the minutes sub-dial. 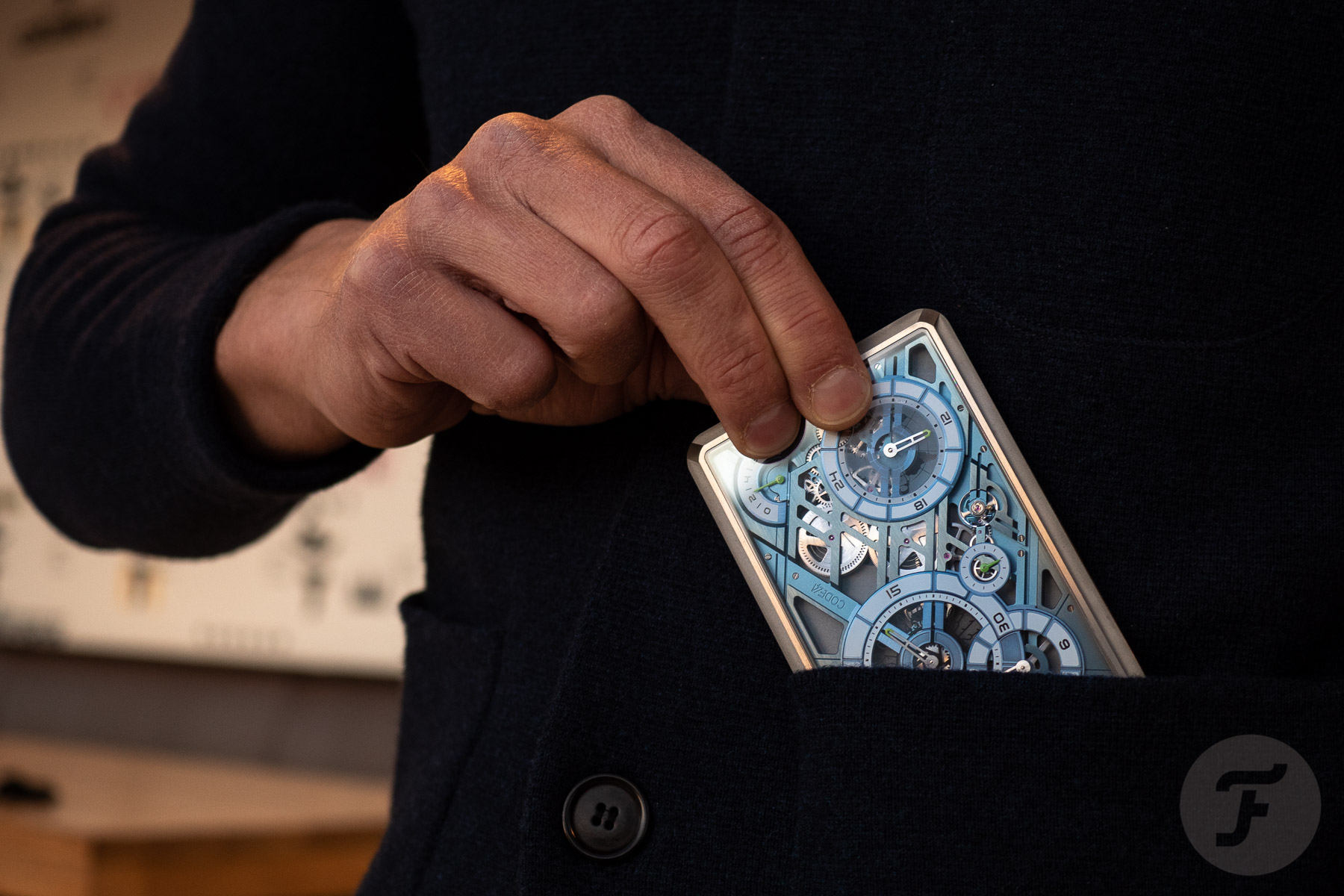 Until December 31st, the price of the Mecascape Sublimation One will be €11,545, the special Creator Edition price. The Future Edition price is €14,800. Have a look at the official CODE41 website to see how many pieces are still available. This pocket watch 2.0 comes with a protective leather sleeve that doubles as a holder for credit/business cards. For those who decide to pull the trigger, you’ll likely be able to start enjoying it in the autumn of 2023. And when I say “enjoying,” I mean putting it in and taking it out of your pocket and playing with it in your hands. The Mecascape is a very tactile object, after all. 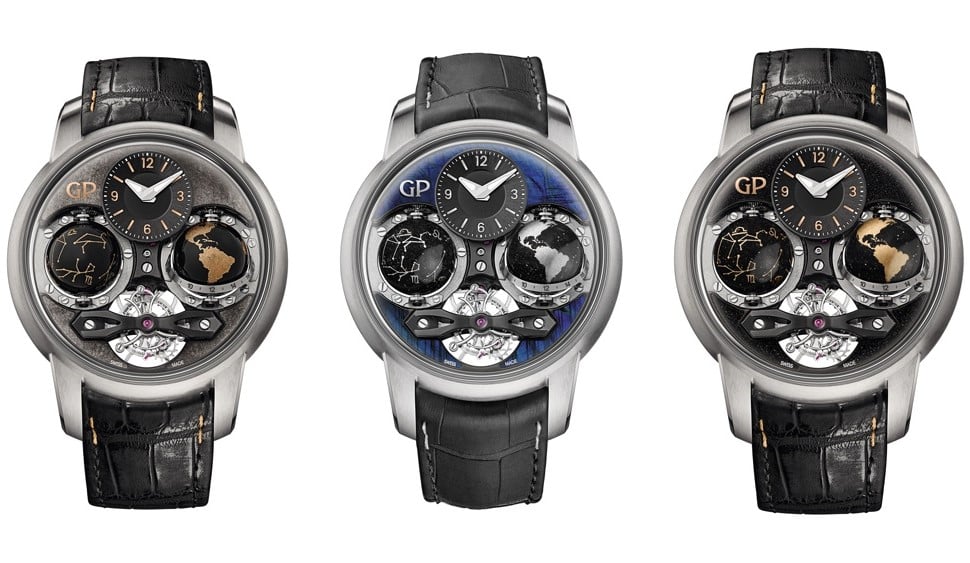 I have a soft spot for Girard-Perregaux. I think the brand’s Tourbillon with Three Gold Bridges is one of the most stunning Haute Horlogerie creations of all time. It’s simultaneously classic, complicated, and powerful. But I also truly appreciate the different chronographs that the brand made for Ferrari — to me, “GP” is the only watch brand that knew how to express the famous car manufacturer’s mythical status. The Cosmos, first introduced in 2019, is a complicated creation that also resonates with me. There are copious amounts of technical virtuosity, spectacular finishing, and artisanal craftsmanship to be found in the Cosmos. Now there are three unique versions of the Cosmos featuring aventurine, a combination of obsidian and onyx, and another combination of spectrolite and aventurine. These three spectacular one-of-a-kind models mark the end of the Cosmos series. 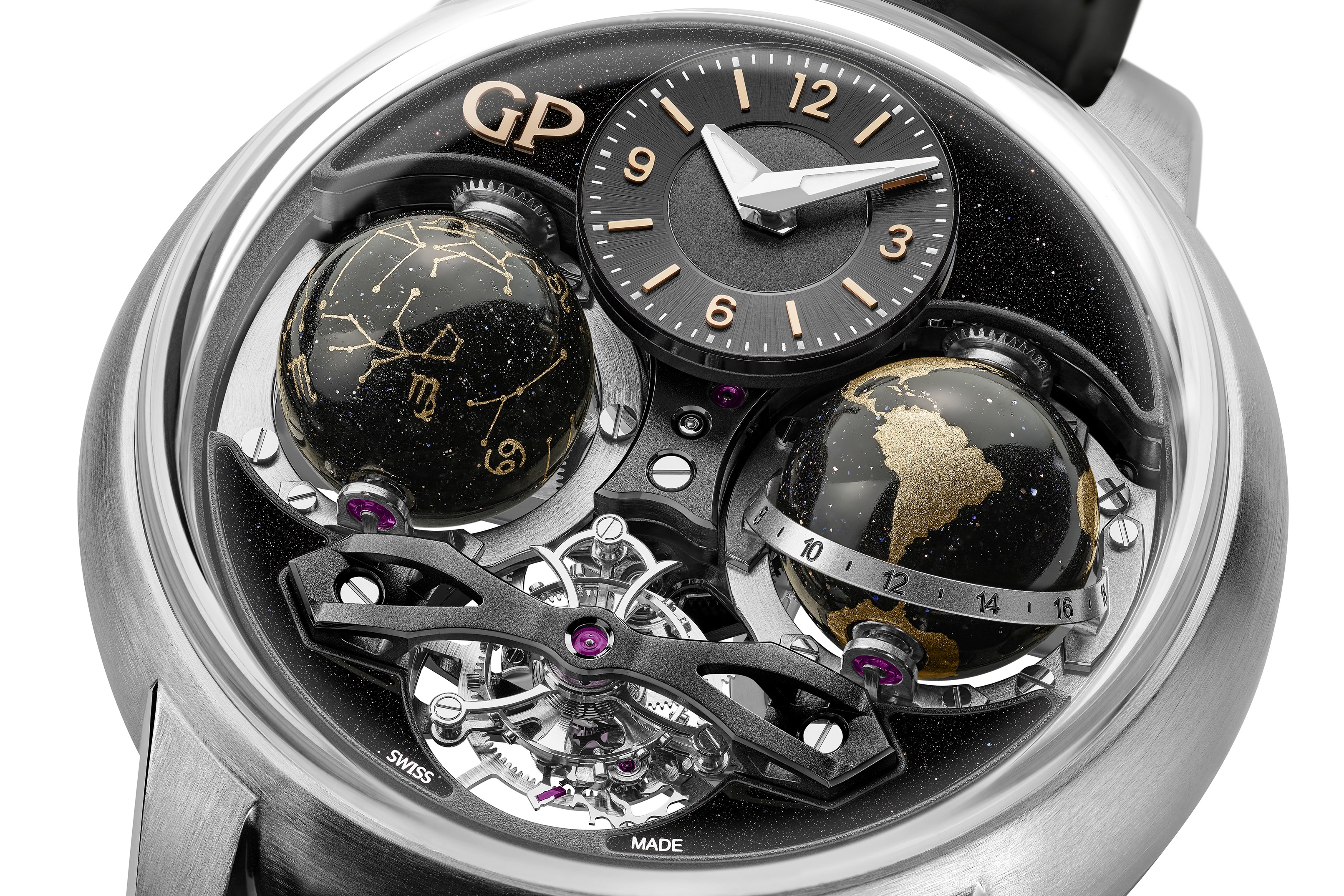 The Cosmos shows us three complications

The Cosmos is equipped with three complications — a tourbillon, a terrestrial globe, and a celestial globe. The gravity-defying, lyre-shaped titanium tourbillon carriage takes its place at the base of the dial. It rotates underneath a sandblasted and hand-beveled Neo Bridge in black PVD-treated titanium. This bridge is a contemporary interpretation of the classic arrow-shaped bridge of the 19th century. The terrestrial globe at 3 o’clock serves as a day/night indicator, and the celestial globe at 9 o’clock displays the constellations of the Zodiac.

All three Cosmos creations have a two-part dial, but each features different materials. There’s aventurine, obsidian, and spectrolite, an uncommon variety of labradorite feldspar from Finland. And the three-dimensional globes are made of either black aventurine or onyx. The globes inside the Cosmos show golden micro-painting done by hand, a precise and time-costly process that took 14 hours to complete. The strong-looking, sword-shaped white gold hands are not complicated, but they are very GP, just like the tourbillon bridge.

The moves and movement of the Cosmos 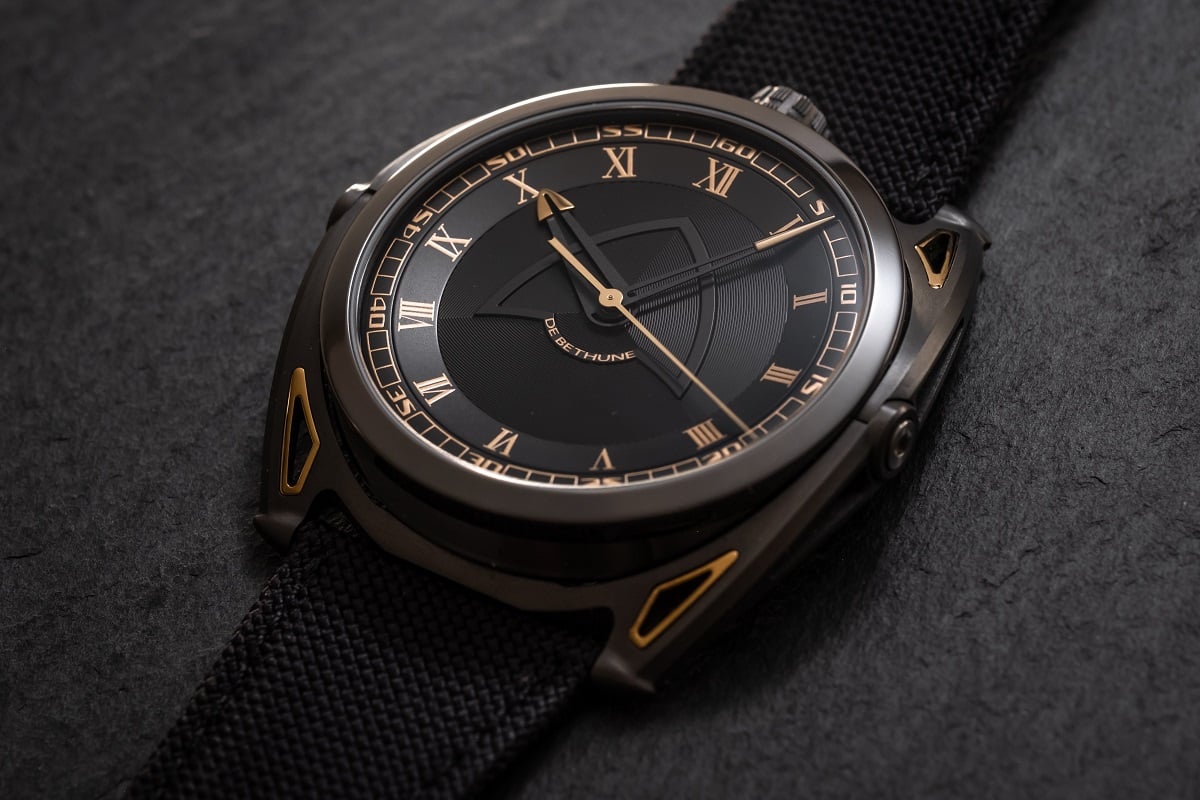 Lucky Americans… The new De Bethune DB27 Titan Hawk JPS (ref. DB27V2JPS) is a stunning, US-only watch limited to 25 pieces. The newest member of the Titan Hawk family combines advanced technical features, practicality, and wearability with a clean yet charismatic design. De Bethune’s source of inspiration was the golden age of motorsports, the 1970s — the John Player Special-sponsored black and gold Lotus Formula 1 cars of that time, to be precise. Hence, the JPS in the name of the watch. The “engine” of the watch is not a Cosworth V8, as you would expect. Instead, it’s the self-winding caliber AUTOV2. And that movement offers a 60-hour power reserve from a single mainspring barrel. It also features De Bethune’s signature titanium balance with white gold inserts. 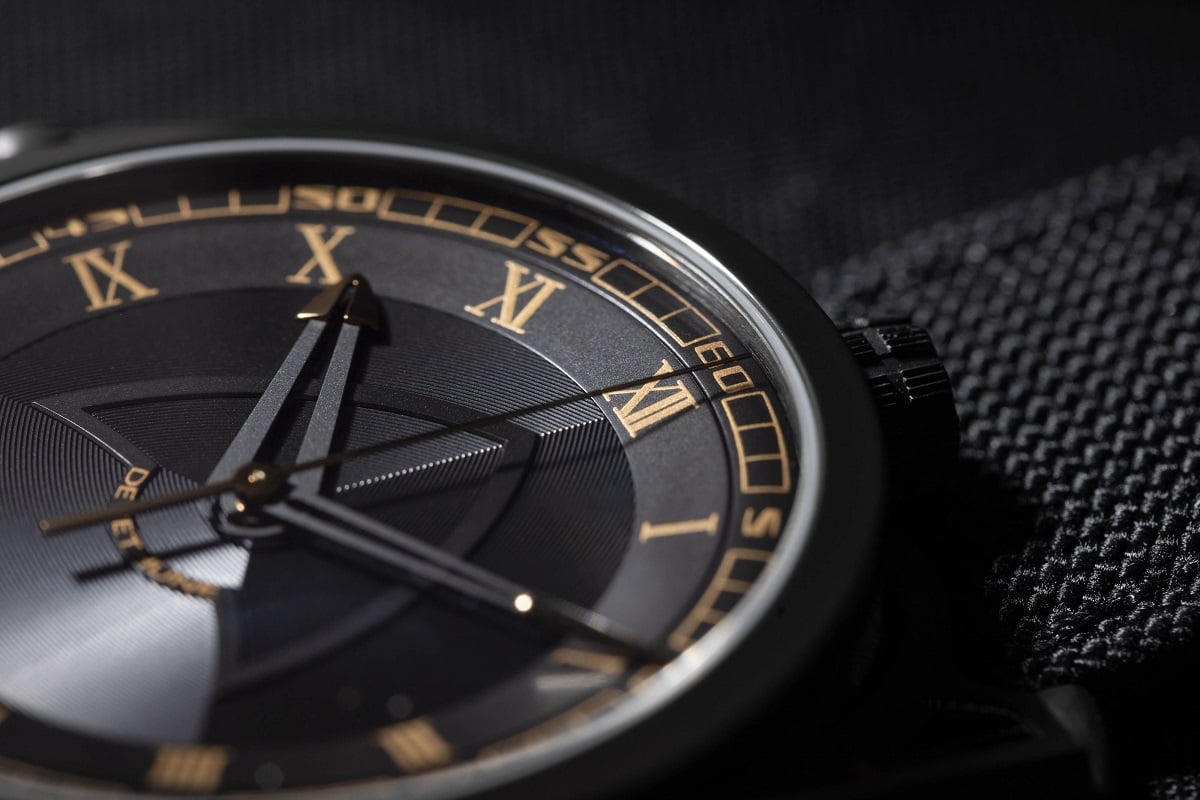 The case of the De Bethune Titan Hawk JPS (US$60,000) is made in black zirconium. That’s a high-tech, high-strength, hypoallergenic, and lightweight alloy whose chemical and physical properties are similar to those of titanium. And because of the brand’s signature, ergonomic “floating lugs”, the watch perfectly follows the wearer’s wrist no matter the size. The yellow titanium accents that contrast with the black zirconium case give the watch its unmistakable and attractive John Player Special looks. Find out more about the classic F1 car for the wrist on the official website of De Bethune.

Have yourselves a wonderful Boxing Day/Second Day of Christmas and inspiring watch talks over dinner, drinks, and coffee, of course. Happy Holidays!