Here on Fratello Watches, we generally cover the new watch releases that the Diver’s Watches Facebook Group (43,000 members and growing) helps create along with what is most often a micro brand. Thus far, we’ve reviewed releases from Zelos, Gruppo Gamma and Aquadive. All sold out quickly and were great, limited edition “one and done” pieces that showed serious evidence of design choices made in part by the online group’s moderators. The group tries to work on at least a couple releases per year and today’s article takes a look at the newest: the Crepas Loggerhead. 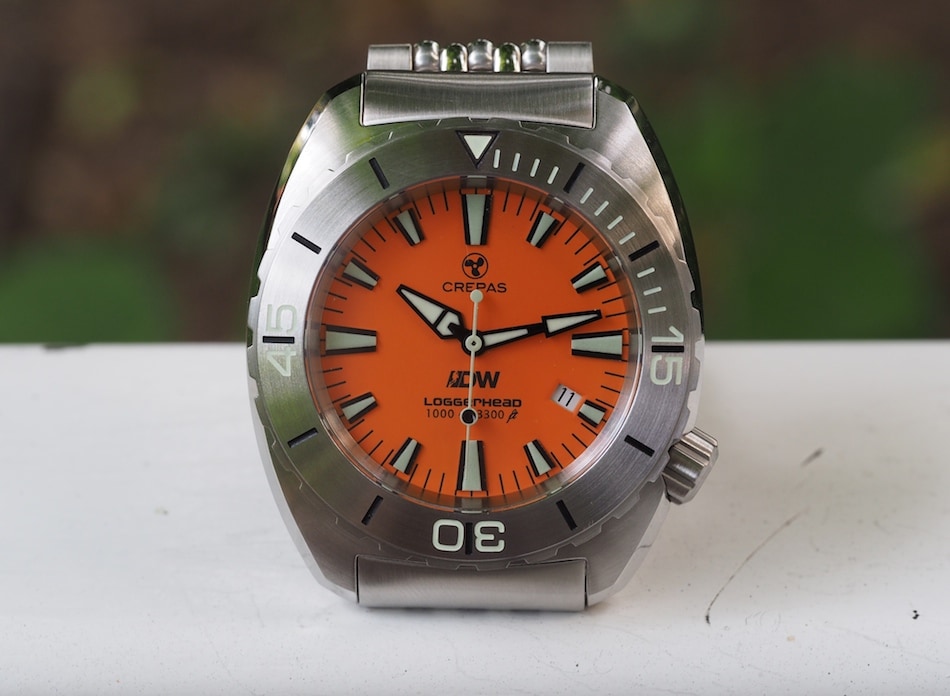 If you’ve never heard of Crepas, don’t worry because I hadn’t either. In the quickly expanding world of micro branded watches, it’s not easy to keep up with the sheer number of brands, but as a bit of a spoiler, Spain-based Crepas is one to watch. Now, depending on where you’re from and how you read things, the brand’s name might come off as a bit odd, but in what I’d term as a nice surprise, the name has meaning. “Compañía Relojera Especializada para Actividades Subacuáticas” is the long form of the name and taking the first letter of each leads us to “Crepas”. If you’re not a Spanish speaker, the name stands for “Specialized Watch Company for Underwater Activities”, so one at least doesn’t have to guess as to the purpose of the company’s watches. Like many smaller brands, the watches are likely made in Asia (read: China) and as we’ll see with the Crepas Loggerhead, it’s long on features and contains some of the better finishing I’ve seen at this price point. 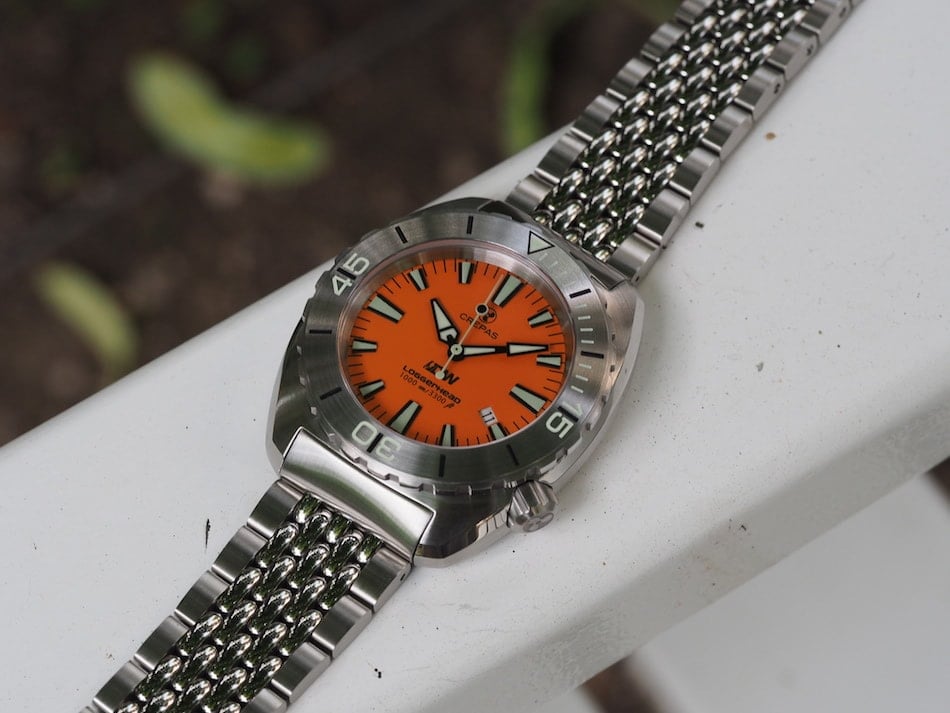 It’s possibly a bit odd to start with the case detailing of a watch instead of the dial, but let me explain. When spending 400 – 700 Euros on an automatic watch, I’m generally a bit forgiving of the typical slab-sided cases that are found on micro-branded (heck, even macro branded) watches. Many brands play to this by releasing some sort of aviation-themed watch because these types of watches often were released with such cases decades ago. On the other hand, there are plenty of dive watches at this price that makes it out the door with decent bezels or topside finishing that have little in the way of sculpting on the sides. With the Crepas Loggerhead, you’re certainly not left wanting for nicely rendered surfaces. 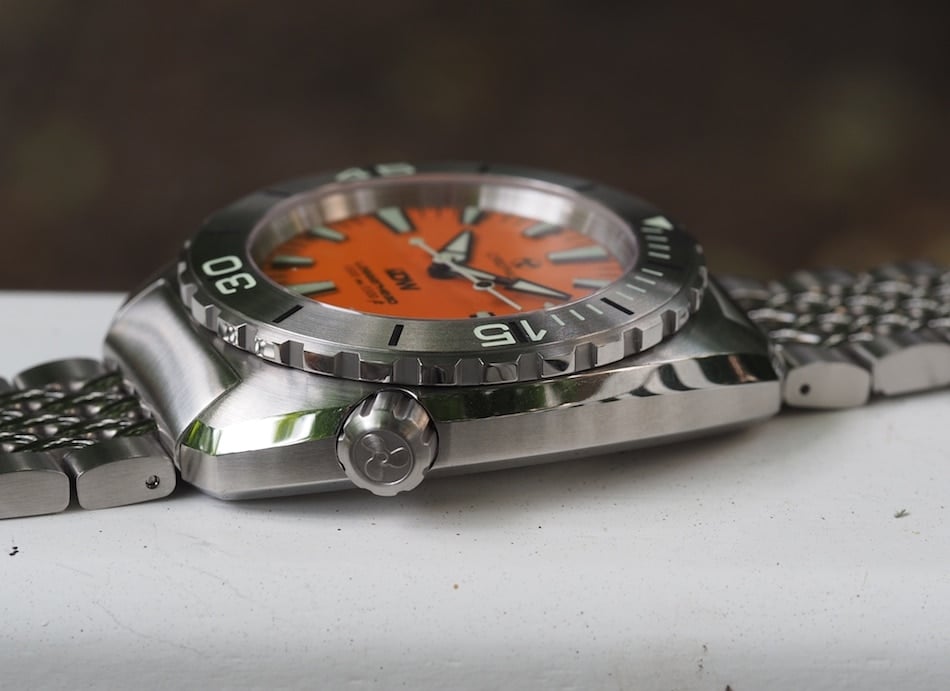 A look from the side of the Crepas Loggerhead shows no less than three distinct surfaces that come together to add some higher end complexity. Of note is the oft-eschewed undercut that tapers inwards to the case back. Taking a look at the case shape in general, we are met with what I’d refer to as a blockier version of a c-case. It’s not overtly retro, but it certainly brings in touches from a number of past watches. Most obviously, and perhaps because it’s paired with a well-weighted rotating stainless 120-click bezel with luminous elements (and there are some dial similarities too), I see some Seiko Monster in the Crepas. 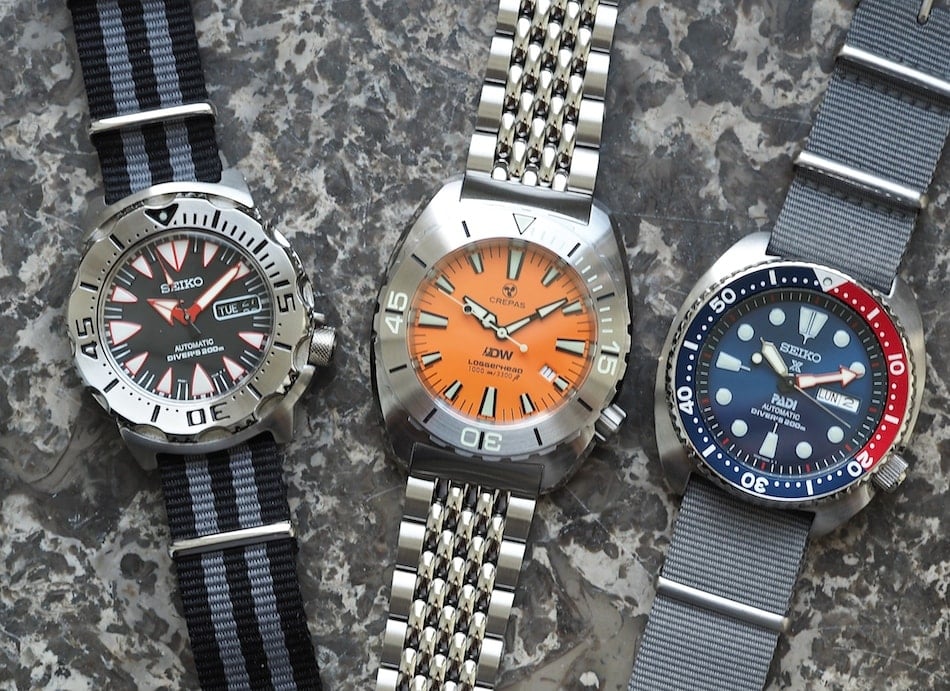 The 4:00 screw down crown – signed with the brand’s propeller motif – also brings Seiko to mind. This crown, by the way, is the best I’ve ever used on a micro brand (admittedly, I do end up testing a lot of prototypes) and is honestly better than the one on my modern Seiko Turtle. The spring feels solid once the crown is unscrewed and it’s smooth to screw in when sealing it. It’s impressive that it exhibits none of the usual slop on so many watches out there. 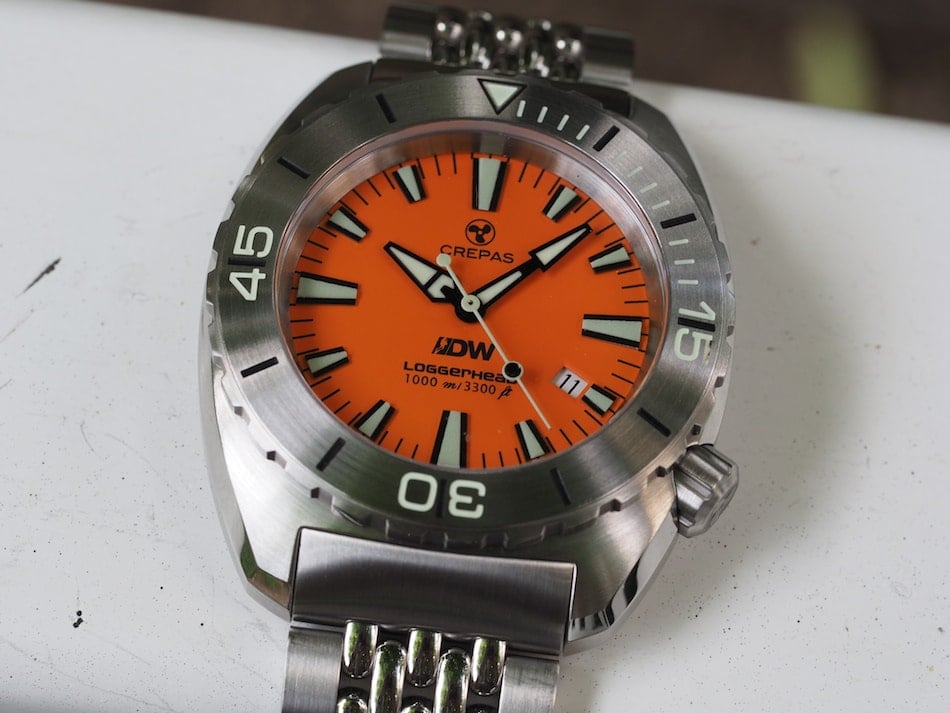 When taking a look at the dial of the Crepas Loggerhead, there’s once again a decent amount of Seiko Monster. The layout is extremely legible with its arrow-shaped C3 Superluminova markers at every hour and the similarly shaped hands make time telling a breeze. A thoughtful note is found on the sweep hand as it contains a nice little black lollipop. I also like the non-intrusive, yet readable date at 4:00 as well. The black-printed verbiage on the dial is kept to just the facts and it contains one fo the better integrations of the DWFG logos as well. Plus, I find the use of a script “m” and “ft” rather charming near the 1000m water resistance notation. The nice matte orange finish itself comes off as retro “chalky” in some lights and brighter in others, which is likely due to the AR on the flat sapphire crystal. 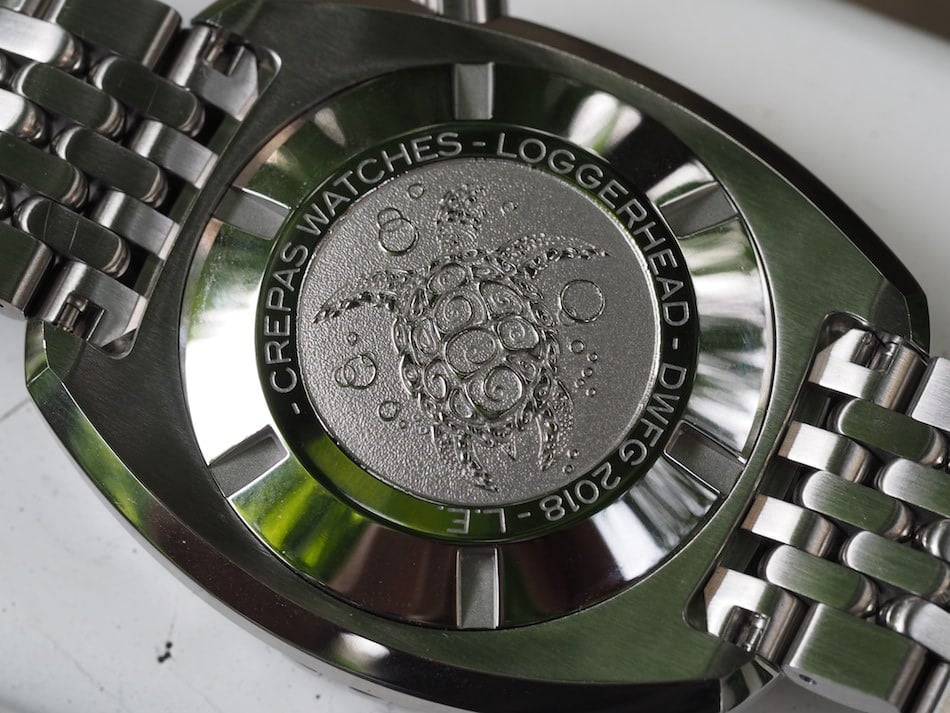 Flipping the Crepas Loggerhead on its dial reveals what just might be my favorite detail: the case back. Now, most micro-branded watches feature what is typically some sort of ornate case back, but this depiction of a tortoise is my favorite of all and could easily be at home on the back of a watch from a much larger and/or more expensive brand. The matte background contrasts wonderfully against the polished raised surfaces that make up the reptile’s shape. It’s seriously good. 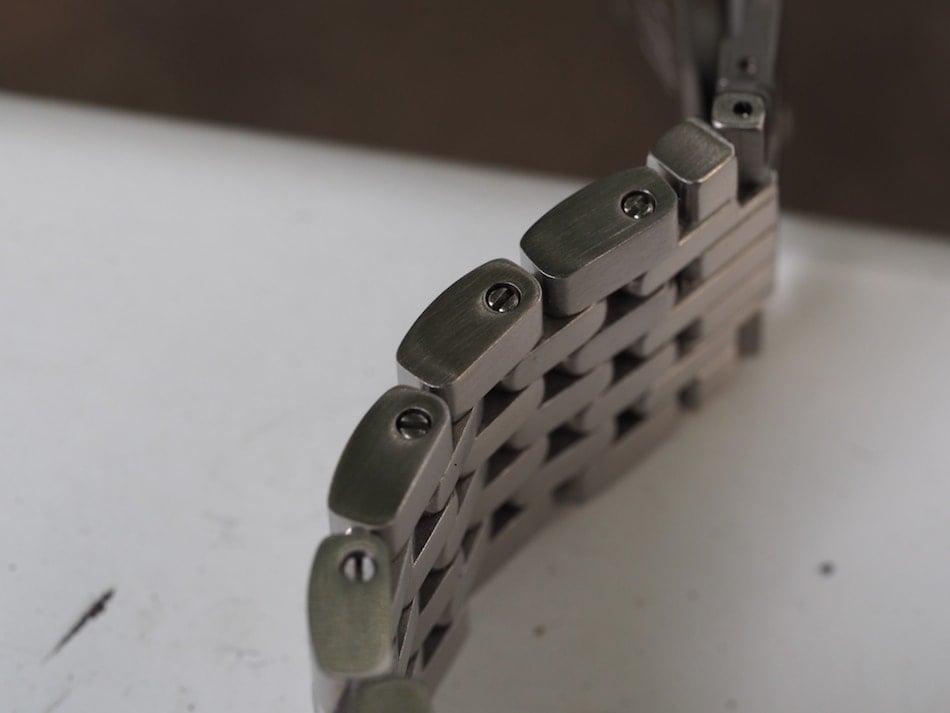 Moving on to the bracelet of the Crepas Loggerhead, I’m once again pleased to say that this is a quality piece. While the bracelet is wide at 22mm, the links are notably supple and comfortable. Links can be removed via screws (yay!) and there’s a nicely crafted foldout wetsuit extension (don’t fear the fact that it’s askew – I misaligned the spring bar) hiding under the stamped clasp. 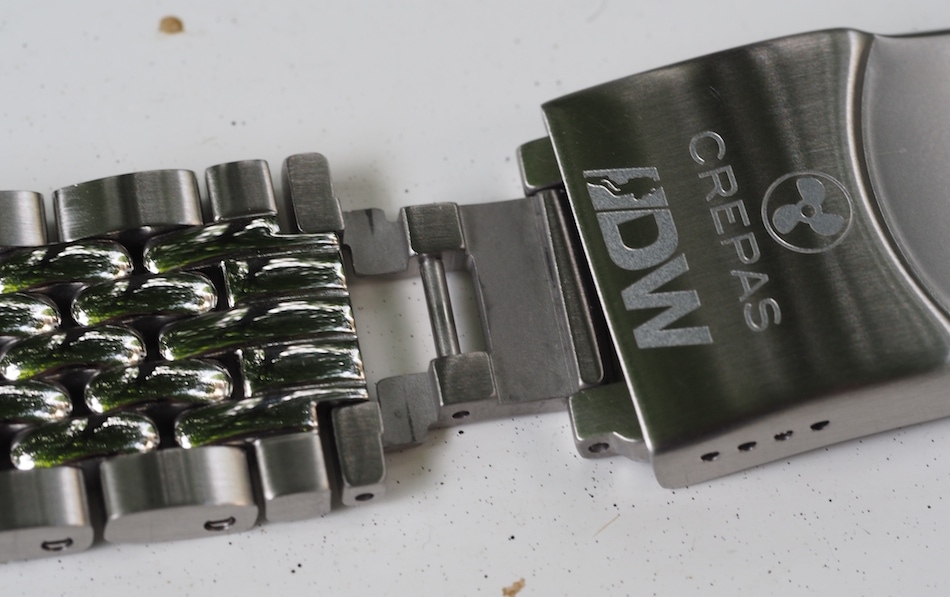 I generally think of Robert-Jan’s hate/hate affair with Seiko bracelets when I’m looking at any bracelet, but I do think he’d give this bracelet a passing score. 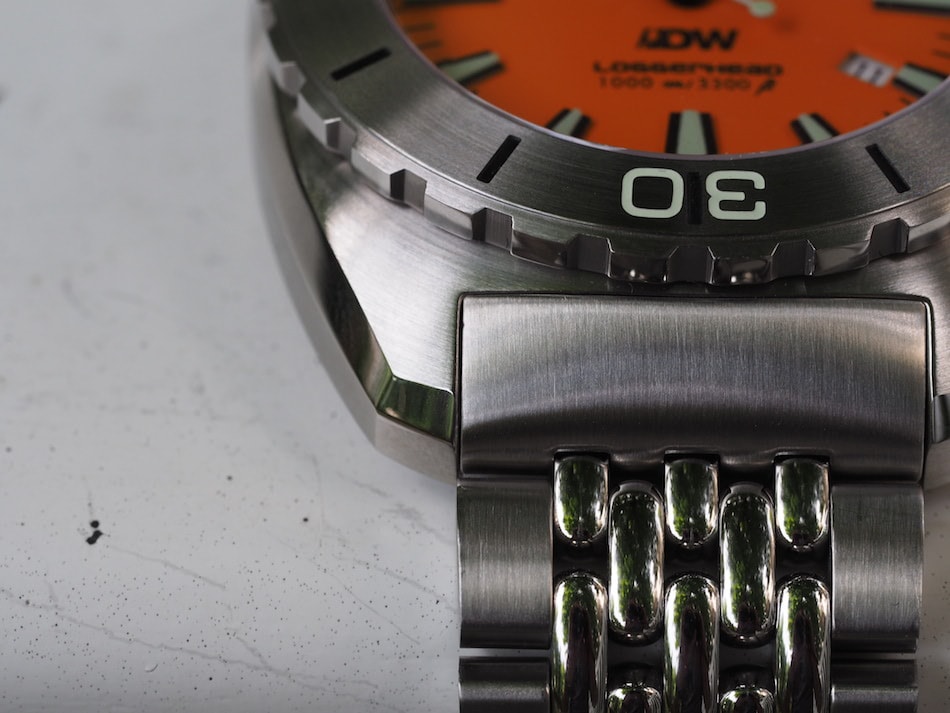 My only concern is with the end links and how they meet up with the case. I actually think it looks too plain and slab-like; it dumbs down the overall look a bit too much and overhangs the case. I’m not sure if Crepas has finalized the design yet, but it’s the only semi-clumsy detail on the watch. 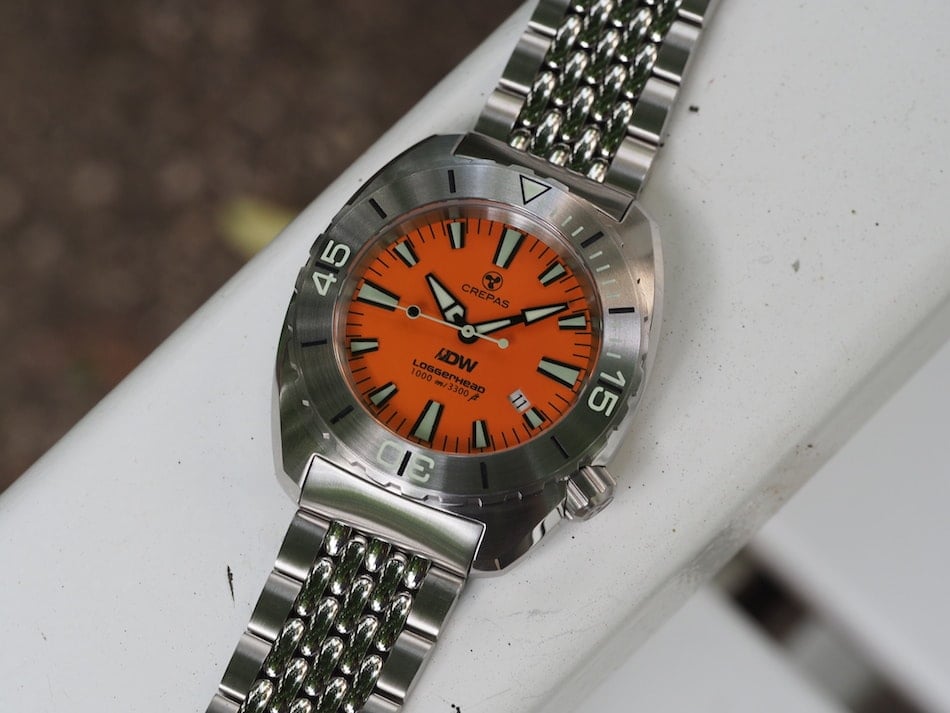 Since we are talking about a small brand watch in the Crepas Loggerhead, you’re likely expecting a Japanese movement or perhaps one of the upstart Swiss ETA clones. Well, you’d be wrong as this piece uses an actual ETA 2824-2 automatic. While there’s nothing wrong with any of those alternatives I named, there’s a slight premium feel to having the original ticking away inside the case. As per usual, the movement hacks and includes a quickset date. As mentioned, the crown action is perfectly smooth and all was straightforward to use. 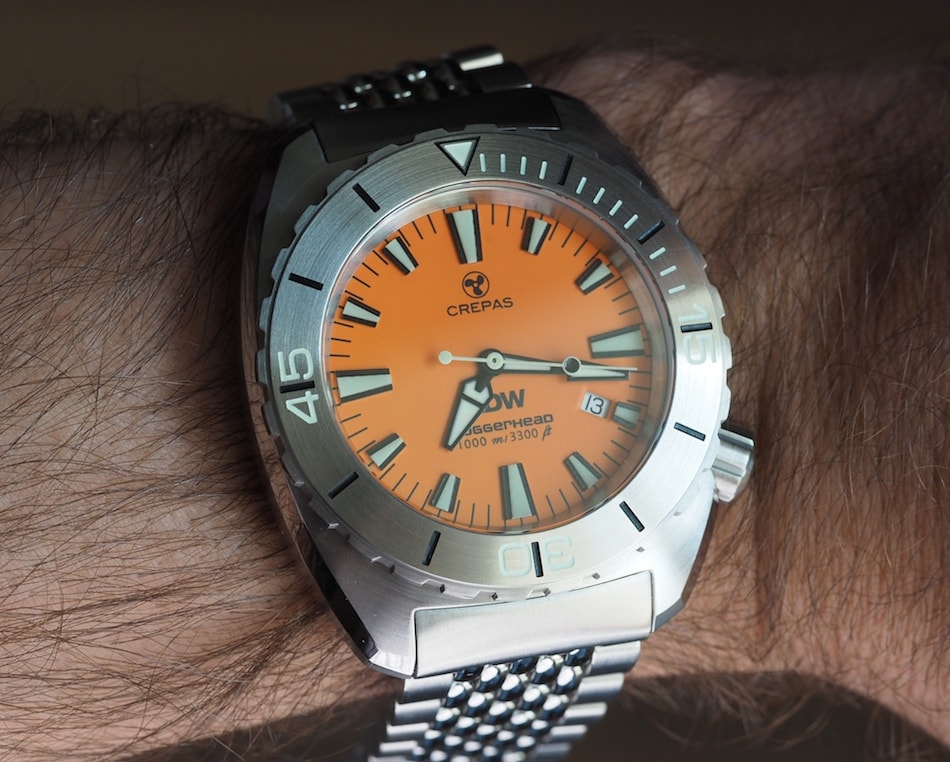 So, now we are left with a couple key points regarding the Crepas Loggerhead and that’s the “how does it wear” discussion and “what’s it cost” question. We’ll start with the wrist presence portion because this watch has it in spades. For a company that mentions that it makes reasonably sized watches, the Loggerhead pushes up against that definition. It’s actually not quite as massive as it looks when comparing it to my Doxa SUB, but it’s not small either.   Plus, it is seriously weighty. Size wise, the 316L case comes in at 44mm in diameter, 52mm lug to lug and roughly 14.5mm in thickness. The watch wears better than I would have thought – it actually does fit my wrist – but I cannot help but think how sweet this package would be at 40/41mm. Apparently, the DWFG leaders chose this size with Crepas in order to ensure it appeals to the larger wristed folks within the group. 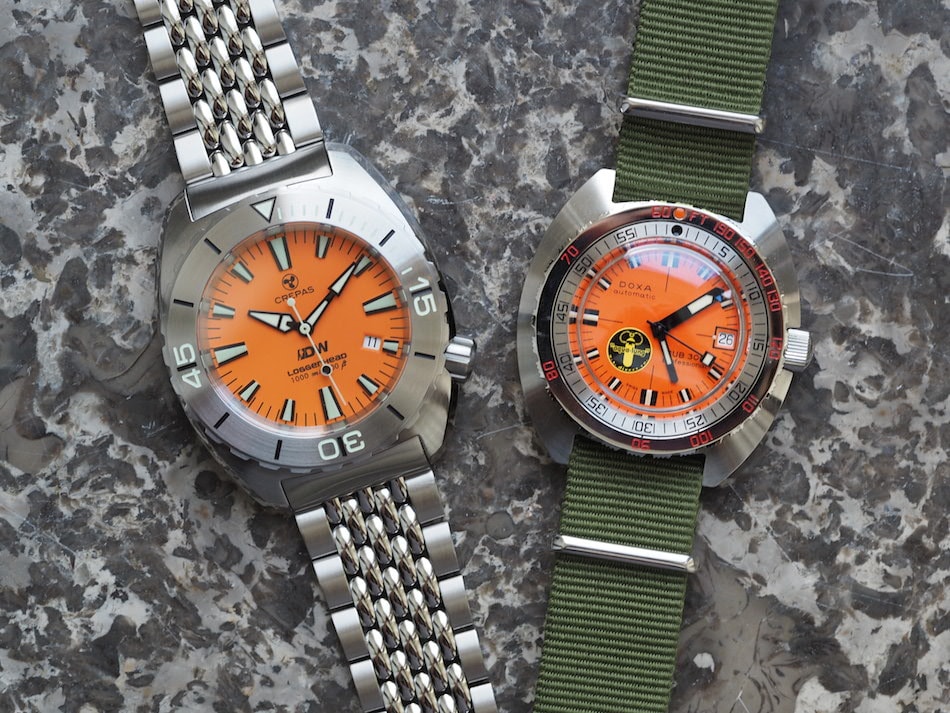 The Crepas Loggerhead will be available as a limited run of 400 pieces and buyers can choose one of 5 dial colors: orange, yellow, light blue, black, or white. There’s no restriction on the number of each dial color, but the total combination of watches will be limited to 400 pieces. The watch will come with a screwdriver, personalized owners card with the edition number, and a carrying case.   Price wise, the Loggerhead will cost 529 Euros (plus 21% VAT within the EU) and I find that completely reasonable when taking into account the overall quality of the entire package. 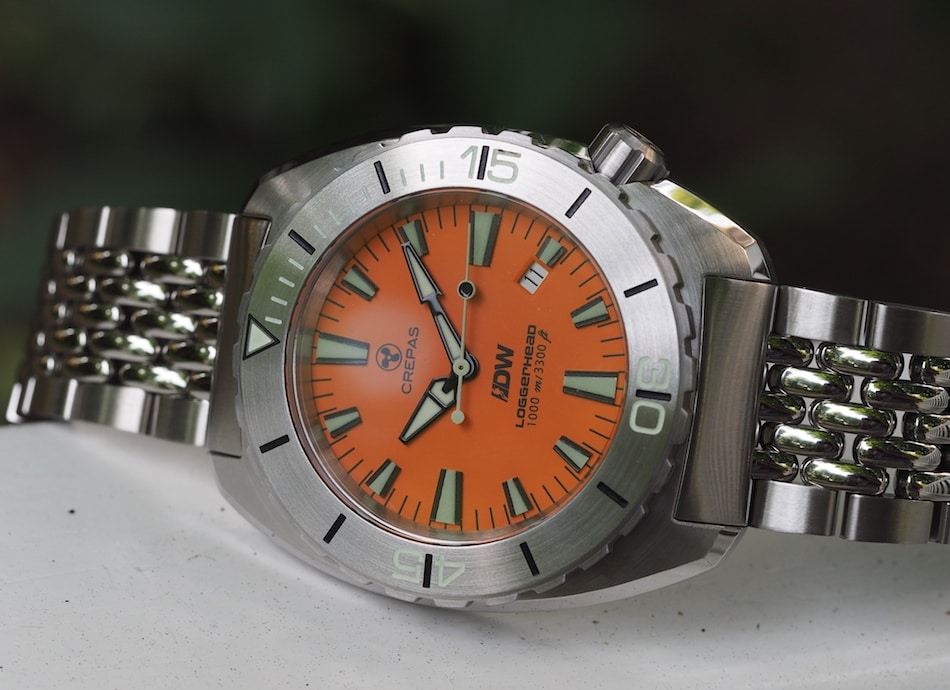 Pre-orders for the Crepas Loggerhead are currently being taken on their website. This watch is just the latest testament to the large DWFG’s ability to create unique and thoughtfully designed watches in partnership with aspiring brands. The Loggerhead just might be my favorite release yet.

Hot Topics
Introducing: The New Seamaster Professional 300M 60 Years Of Bond — With A Special Animated Case Back
104 comments
Are You Still After An Omega × Swatch MoonSwatch?
80 comments
It’s Time To Invest In A Dress Watch — Our Picks From Breguet, Omega, Grand Seiko, And More
72 comments
The Rolex Waitlist Conundrum — How Much Will The Price Of Your Watch Increase While You Wait?
48 comments
The Best Omega Speedmaster Watches Of 2022
40 comments
Popular
The Ultimate Sports Rolex – The Explorer II Reference 1655
Robert-Jan Broer
17
Two Patek Philippe Nautilus Watches: 3700/1A Versus 5711/1A
Robert-Jan Broer
16
#TBT Top Vintage Seiko Divers – They’re All Here!
Michael Stockton
16