Happy Thanksgiving to all our American readers!  At Fratello Watches, we’ve followed the activities of the Diver’s Watches Facebook Group with real anticipation. The group’s 35,000+ members plus their insatiable appetites for all things diver, from inexpensive to dear and vintage to new, it’s a good place to scroll through and blow through a few minutes each day. Plus, the group has enough clout to help create Limited Edition divers from known brands; they’ve worked with Aquadive and Doxa, as well as newcomer microbrands. What’s similar about all the watches? They’ve all sold well. We’ve discussed several of the pieces and tested pieces as well. First, we went hands-on with the Gruppo Gamma Diver’s Watches LE and then we previewed the Zelos Diver Medic Technician. Today, we’ll go hands-on with the Zelos. 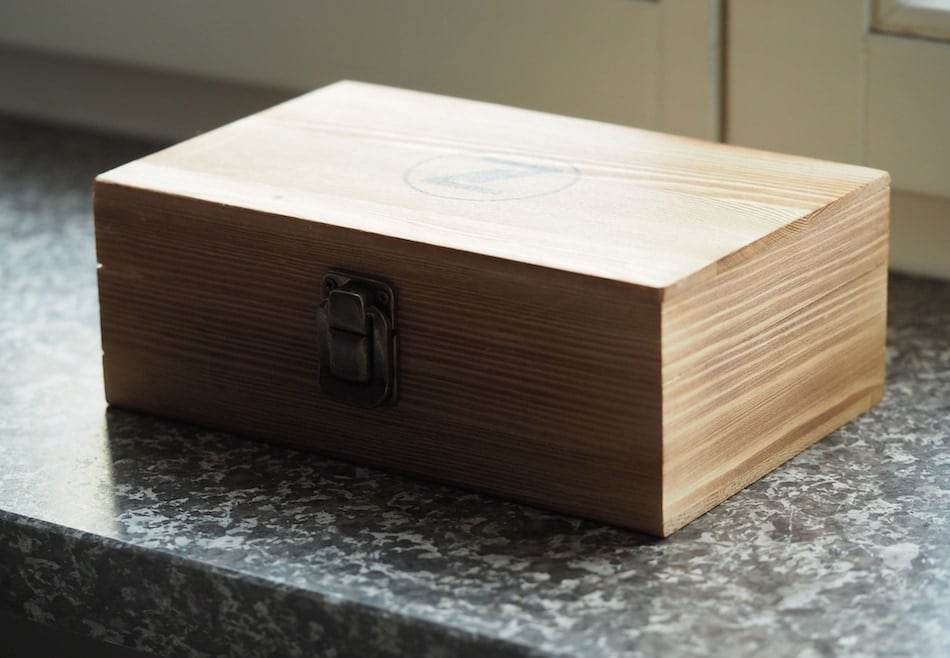 I usually don’t kick off reviews of watches with a discussion on packaging and all its accouterments, but I think it’s a fair place to start our review of the Zelos Diver Medic Technician. The box is the first thing we encounter when receiving a brand new watch and in this case, it’s awfully cool. A really nice branded, somewhat rough-hewn rectangular wooden container greets its new owner with a simple clasp. It speaks of utility and once opened (it’s not partitioned), it’s definitely something that can be used to store straps, watches or whatever else. 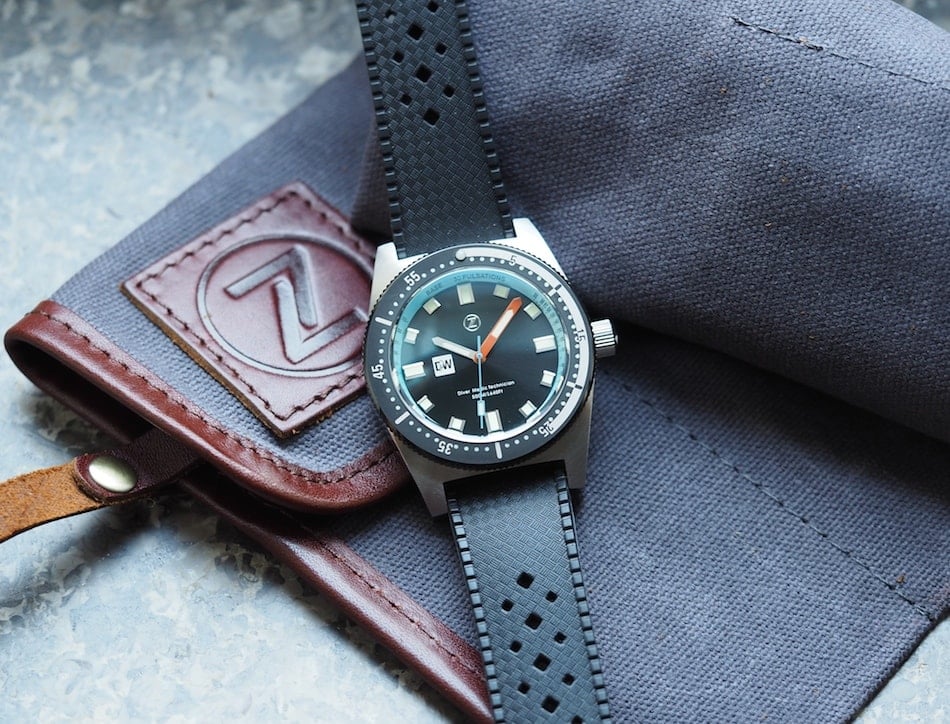 Inside the box is a great four-watch roll with an additional slim pouch for the included anodized aluminum strap tool.   The roll also contains another strap – a denim colored canvas with rustic leather keepers and lining. 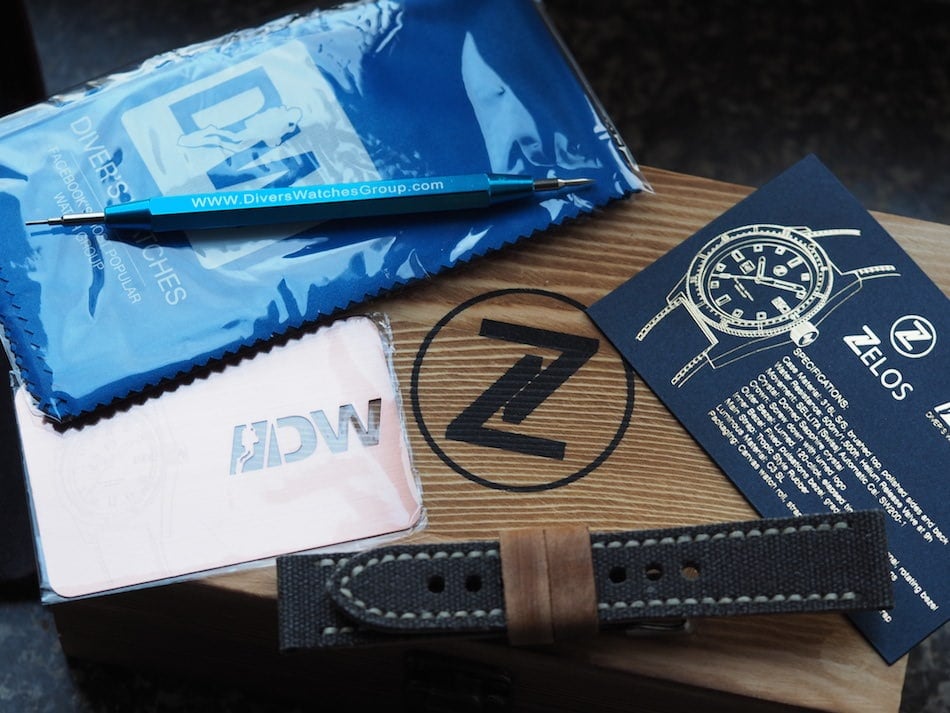 Additionally, there’s a copper card that serves as the certificate of authenticity with the serial number, another card showing the watch specs and Diver’s Watches microfiber polishing cloth. Not a bad start when considering the $469 price of the watch! 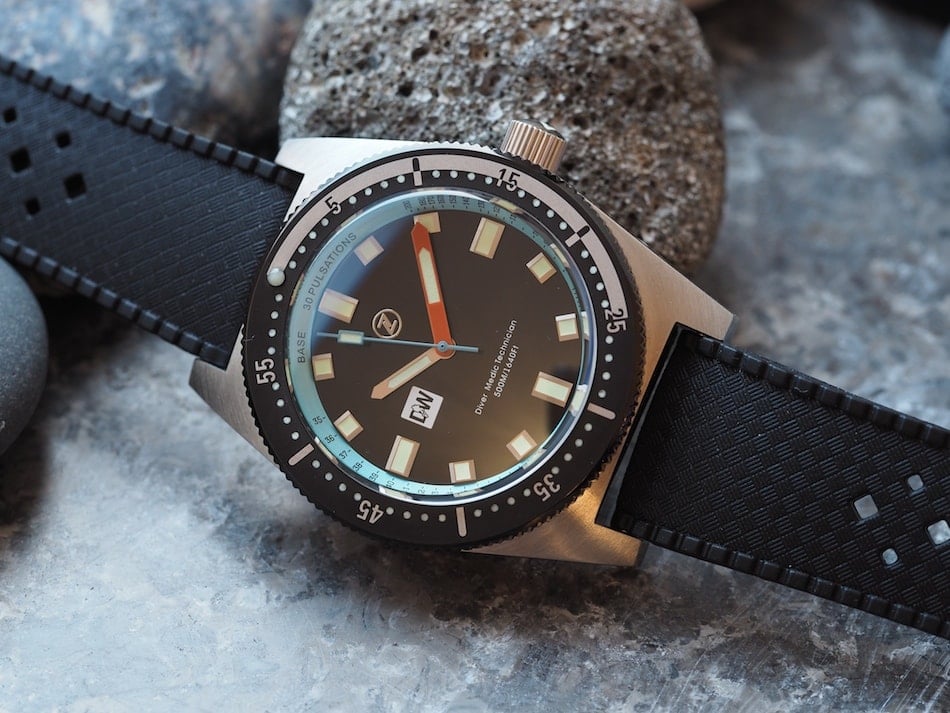 Moving onto the Zelos Diver Medic Technician itself, I was immediately taken aback by how different this watch looks color wise when comparing it to most watches I own. In fact, it gives off a very late 60’s/early 70’s Seiko vibe with the mix of colors like light blue, orange and silver. 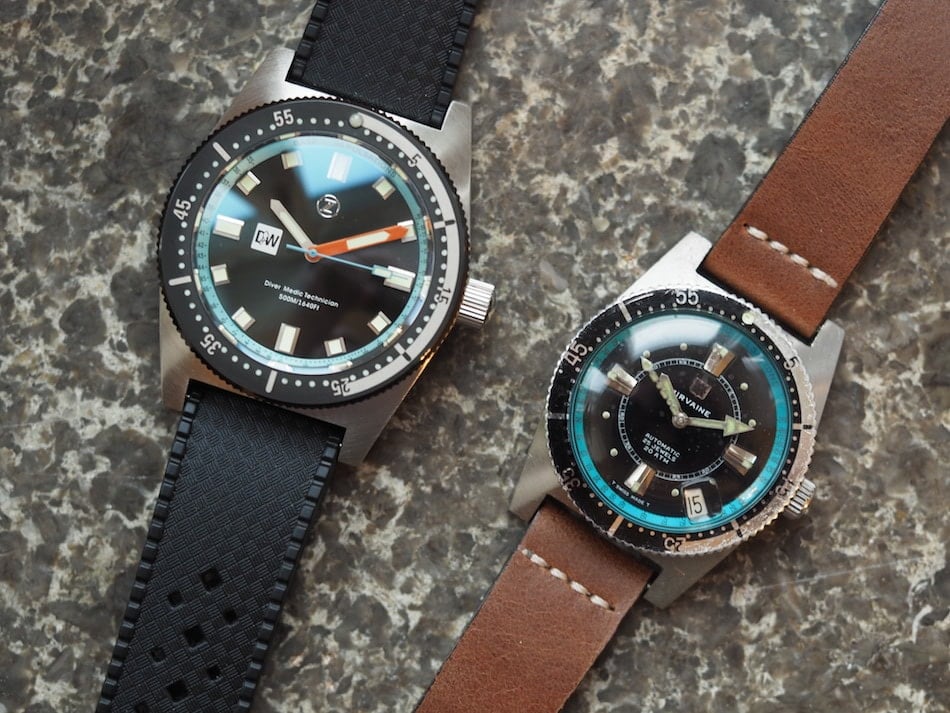 We mentioned that Andreas Gregoriades (who owns the shop Local Time in Cyprus), the leader of the Facebook group, designed the Zelos and he took inspiration from a couple “Aquastar-cased” vintage divers sold by Cortebert and Mirvaine. The difference with the Zelos, though is that it’s received a significant upsizing. At 41mm with 22mm lugs and a chunky case thickness, it dwarfs the 36mm antiques. Still, with short lugs the watch somehow even fits my dinky wrist.   Coincidentally, I had to chuckle a bit as I received the Zelos the day before heading off to the local Seiko boutique in Frankfurt where I tried on the 62MAS reedition, the SLA017. Honestly, the case shape and fit on the Zelo and the Seiko are nearly identical. 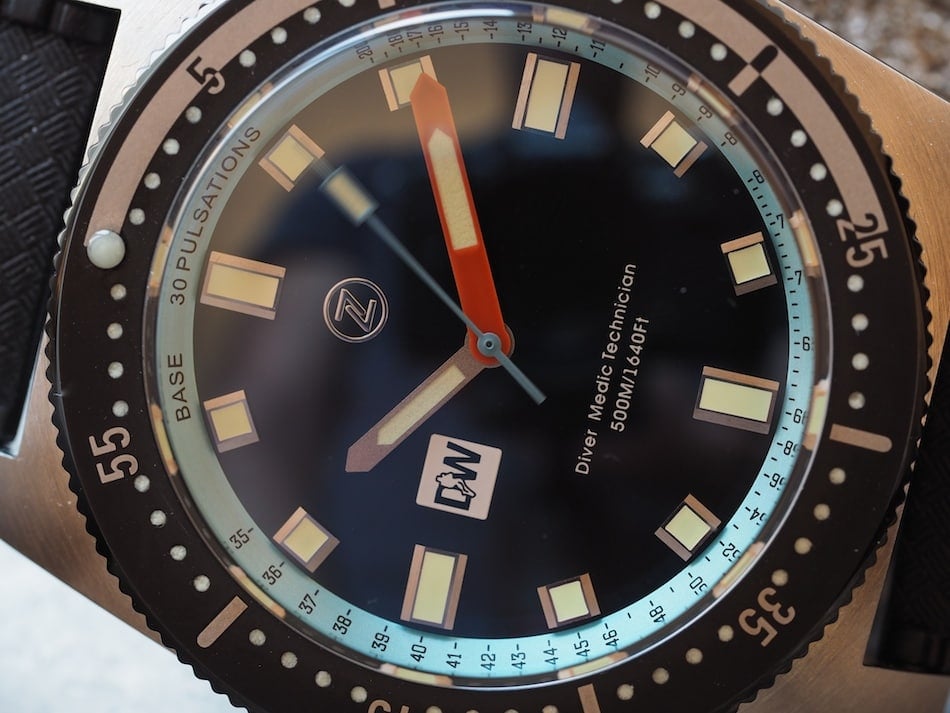 Detail wise, the Zelos Diver Medic Technician is very well laid out and seems to be constructed at a quality level well beyond its price. Sure, the case is relatively simple and the sides get a “pass” for being slab-sided because that’s true to the style of the watch, but I found the brushing well executed as well as things like the glowing crown and the adorned caseback. 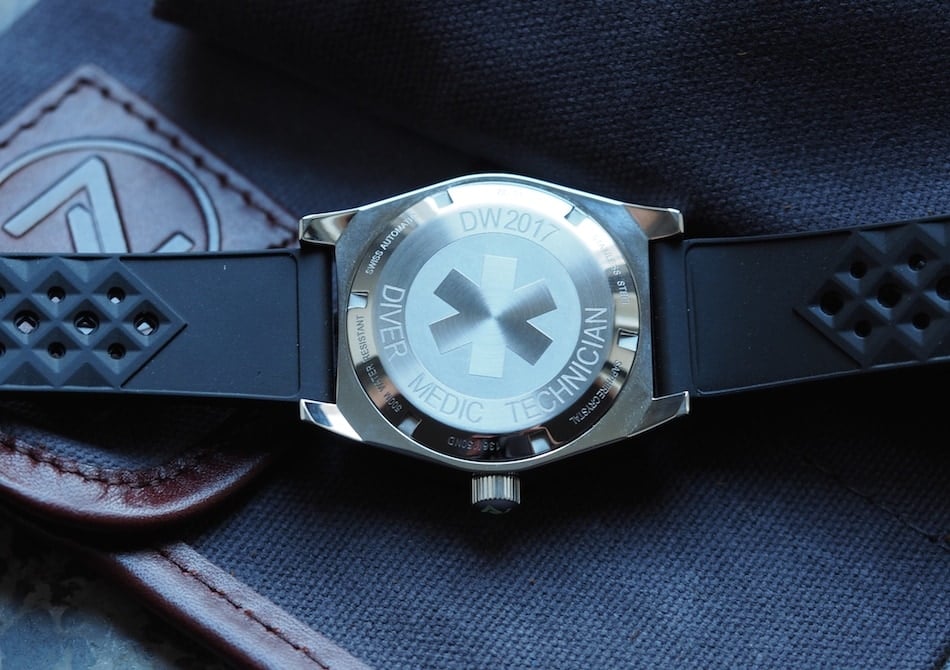 The 120 click dive bezel, in black and silver with a lume dot at 12:00 is nicely weighted and coated. The charcoal dial contains a nice sunburst effect and the details such as the chromed logo, Diver’s Watches motif and model name are all well proportioned. The “screaming” orange minutes hand pops really nicely and the hour hand works well with the similarly designed applied hour markers. And like the aforementioned Seiko, the sweep hand contains a rectangular lume pip near its end. 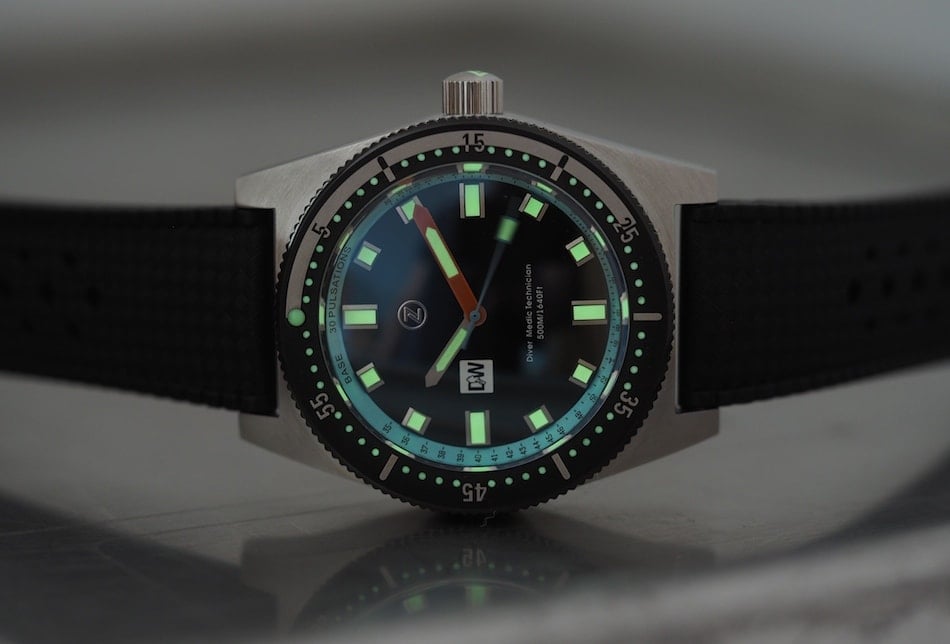 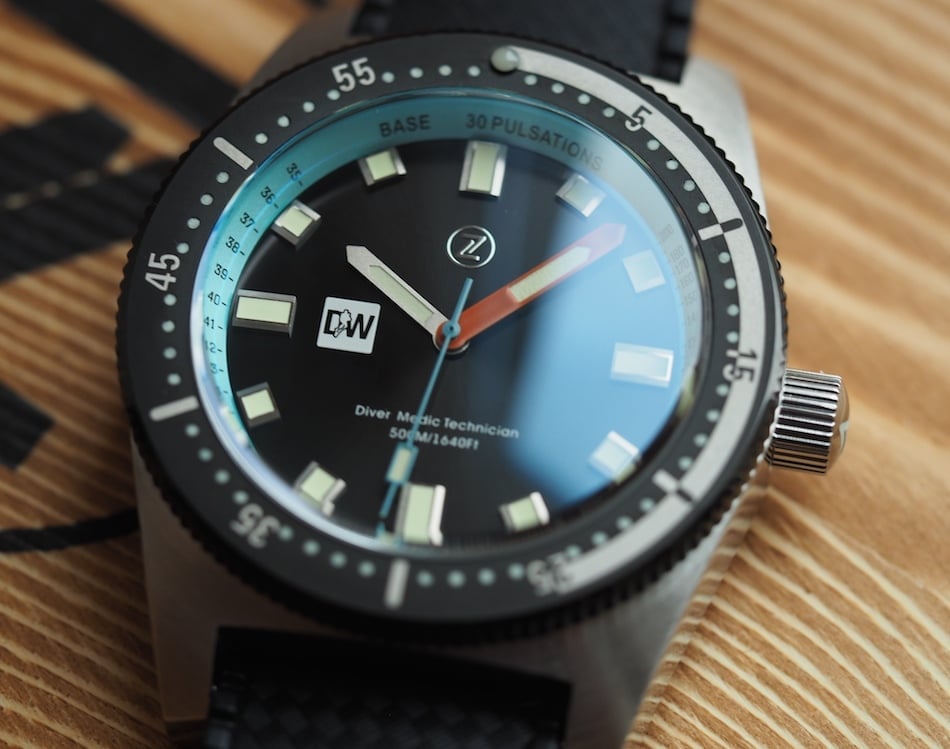 But my favorite detail has to be the inner pulsations bezel ring. It’s done in a light blue that, when seen from certain angles, actually makes the sapphire crystal appear in the same color. Again, it’s not a color that’s often used and to me it really “makes” the watch. 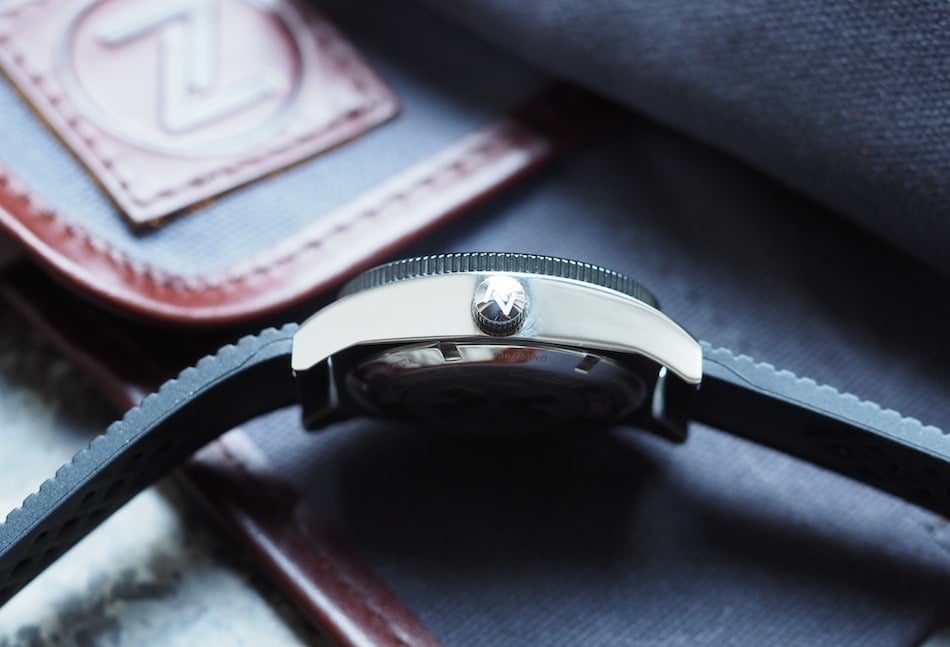 Inside the Zelos Diver Medic Technician one can find the workhorse Sellita SW200-1. It’s a well-known Swiss movement and I have no complaints. Using the screw down crown was fuss free, which isn’t always the case with watches I’ve tested. 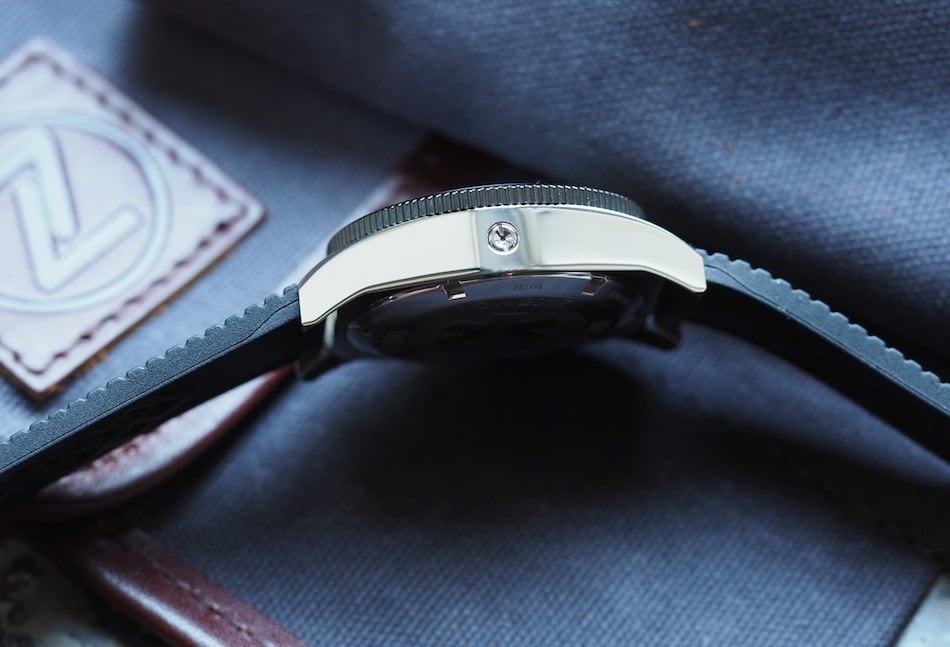 But moving to the opposite side of the crown, we’re met with a capability that simply serves as bragging rights: the helium escape valve. While the Zelos can travel to a depth of 500 meters without imploding, it can also accompany the multitudes of us who decide on a whim to do some saturation diving. A little sarcasm? Yes, and I see this as a bit of a waste, but I suppose it makes the watch all that more of a value for the money. 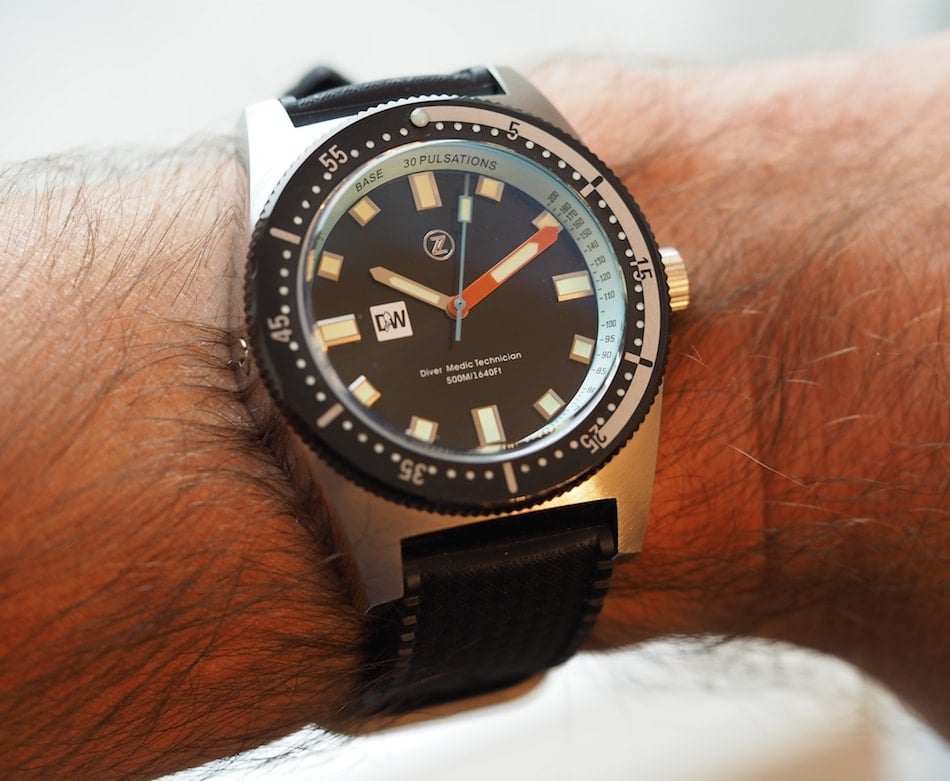 I’ve been wearing the Zelos Diver Medic Technician quite a bit. Yes, it’s a thick watch, but it works for casual wear and I’m looking forward to taking it on my next beach holiday. 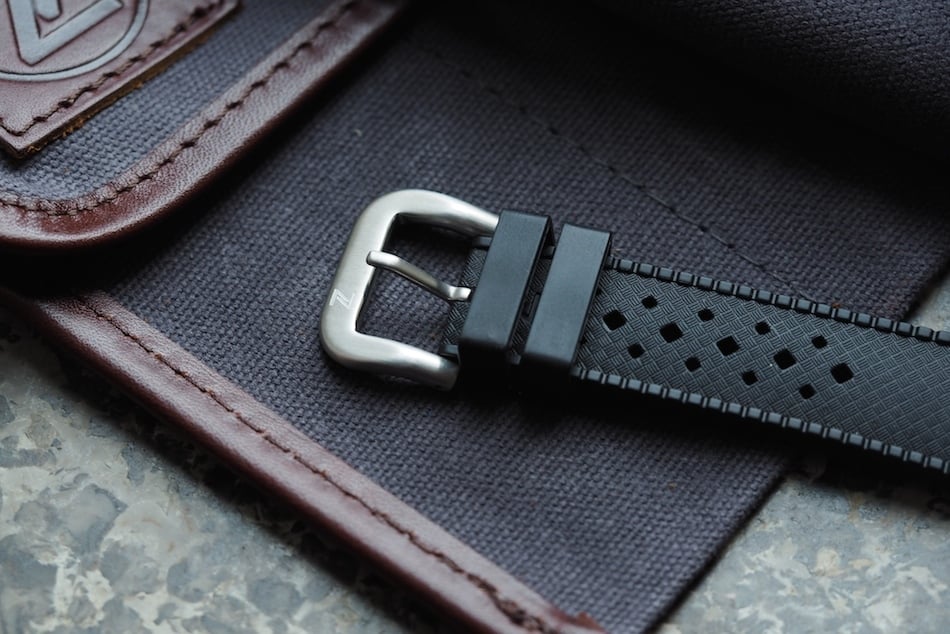 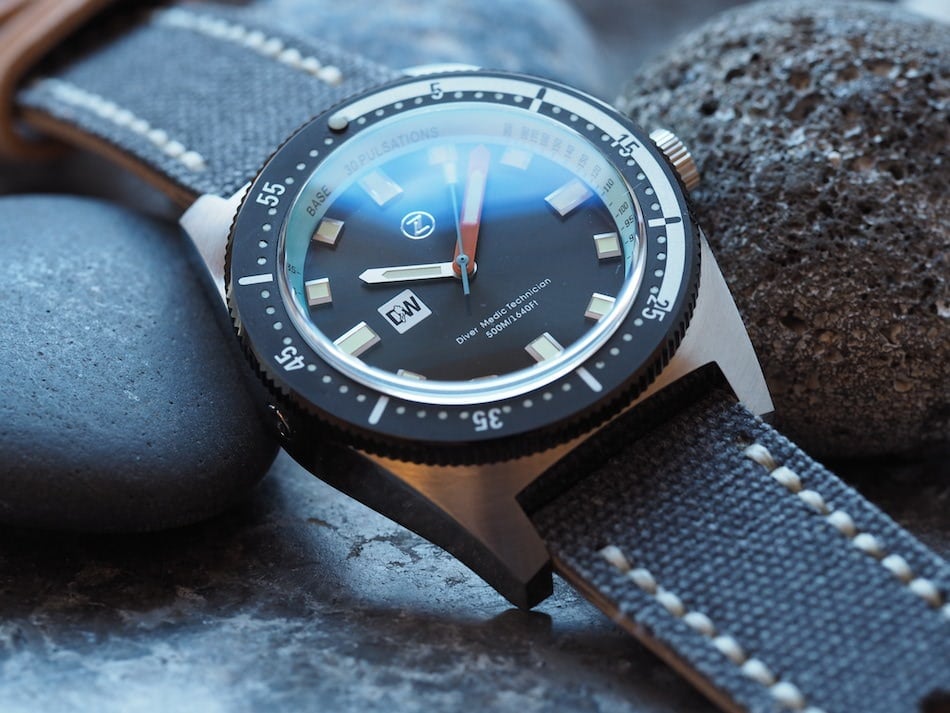 The thick leather and canvas strap, on the other hand, gives it a totally different look and just takes a short break-in period to conform to the wrist. 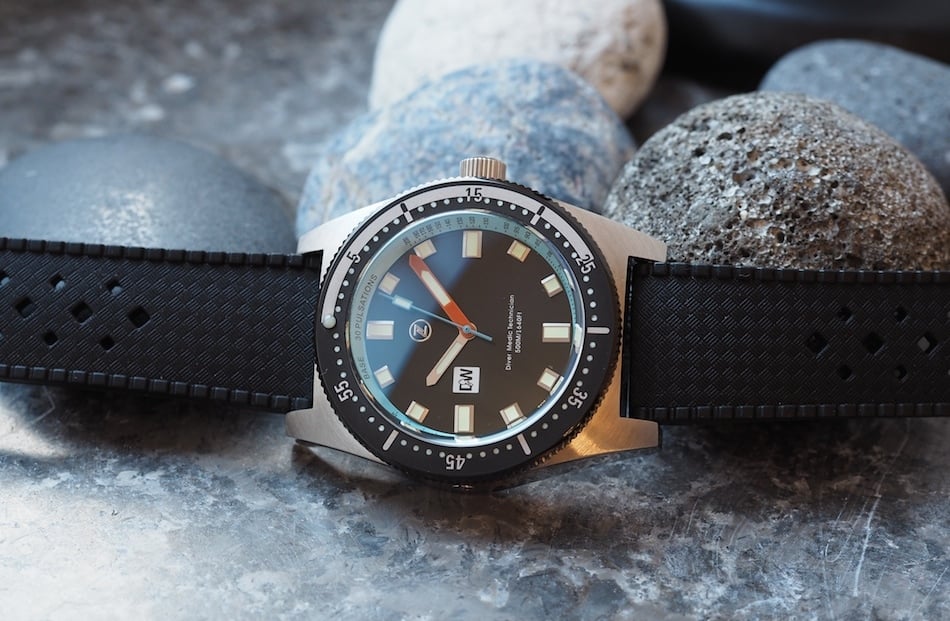 With Asian-based (Chinese) manufacturing, the Zelos Diver Medic Technician comes in with some seriously great features – including a Swiss movement – at an incredible price. These smaller brands are also showing their flexibility by partnering with a fan base such as the Diver’s Watches Facebook Group and creating something very unique for its members. 300 of the Zelos were released and only roughly 20 are still left – amazingly only “no dates” are available. If you’re in the market for a well made and designed diver to compete with, say, a Seiko Turtle, the Zelos is worth a serious look.

Thanks to Zelos and Andreas for sending a Diver Medic Technician for review!