Following the Quai des Bergues (which we reviewed here) and Place Vendôme models, Czapek introduced a column wheel chronograph as the third model in their line up – the Czapek Faubourg de Cracovie. It was unveiled during Baselworld 2018 and named after the location of the third Czapek boutique, opened in 1850 in Warsaw, Poland.

It seems to become a tradition that Czapek opens the Baselworld fair with a breakfast. Even before the first appointment during the press day of the fair, Czapek offers a sneak preview at their new products during an intimate get together in the Volkshaus Basel restaurant. 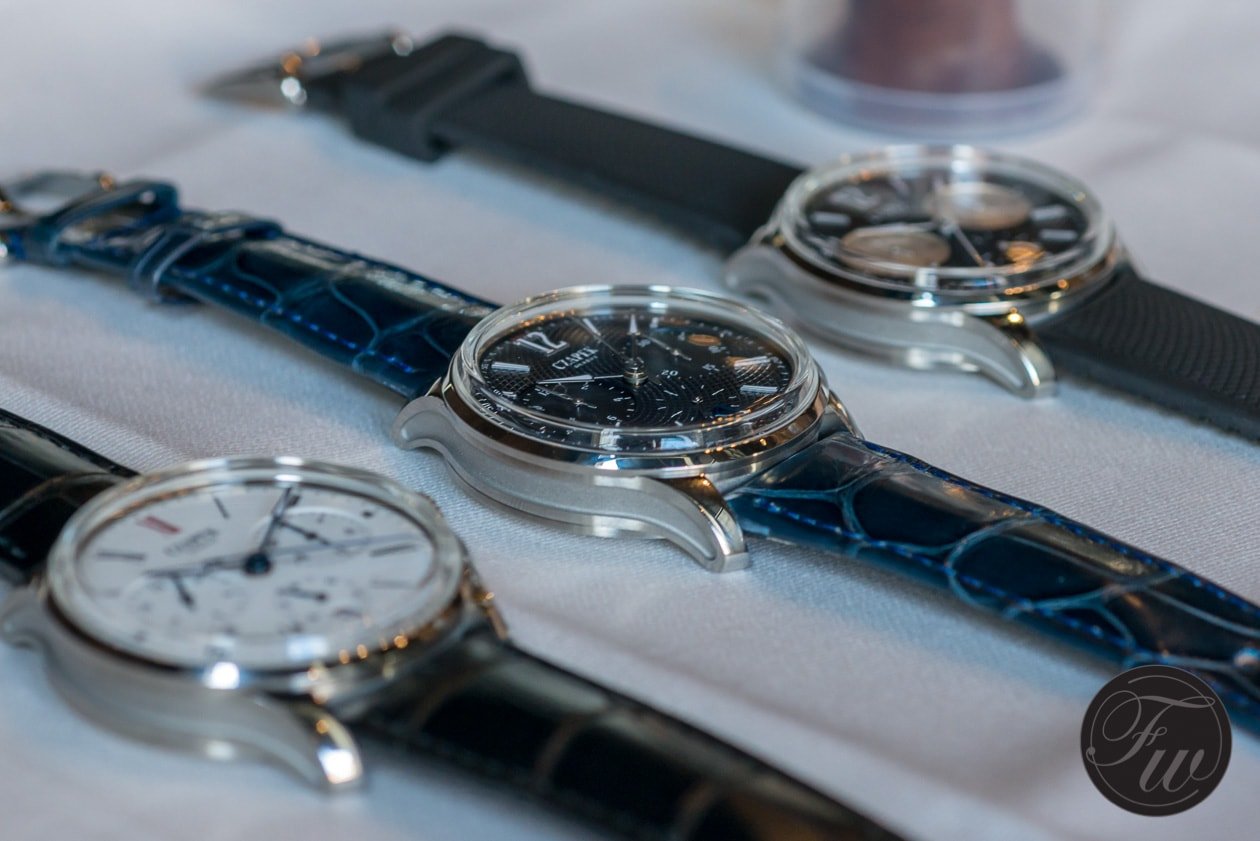 The Czapek Faubourg de Cracovie chronograph makes for a somewhat more sporty watch than the other models in Czapek’s collection. It will become available in three dial variations. The first, named ‘Grand Feu’ still has a classic dial appearance. But the ‘L’Heure Bleue’ and certainly the panda-dialed ‘Dioné & Rhéa’ can be seen as more or less sporty chronographs. 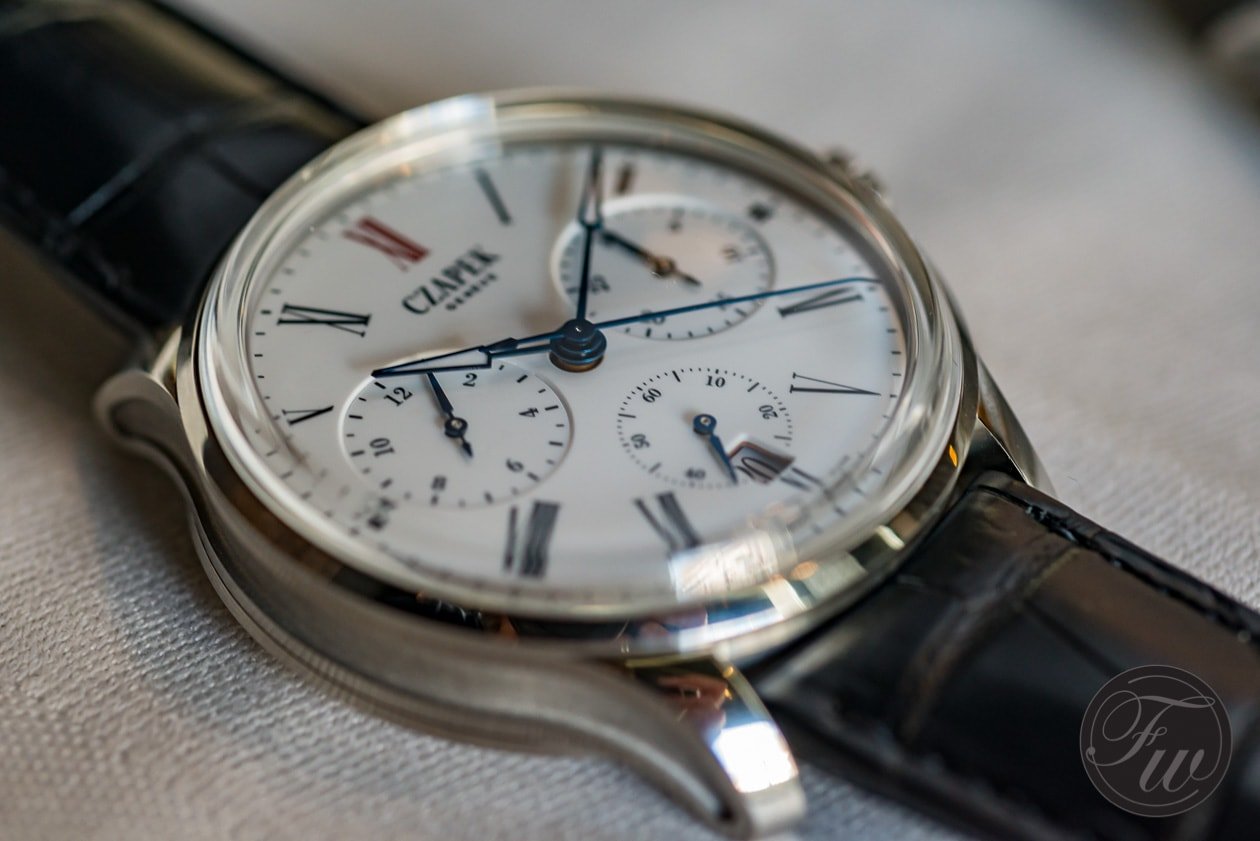 Made by Donzé Cadrans, the brilliant grand-feu white enamel dial is perhaps a bit unexpected in a modern chronograph. It provides a perfect contrast to the various functions displayed, however. The two slightly lowered subdials have been maximally enlarged and make the dial very much balanced. The dial shape isn’t flat but slightly domed, and finally, the brand’s secret signature can be found in one of the subdials once again. 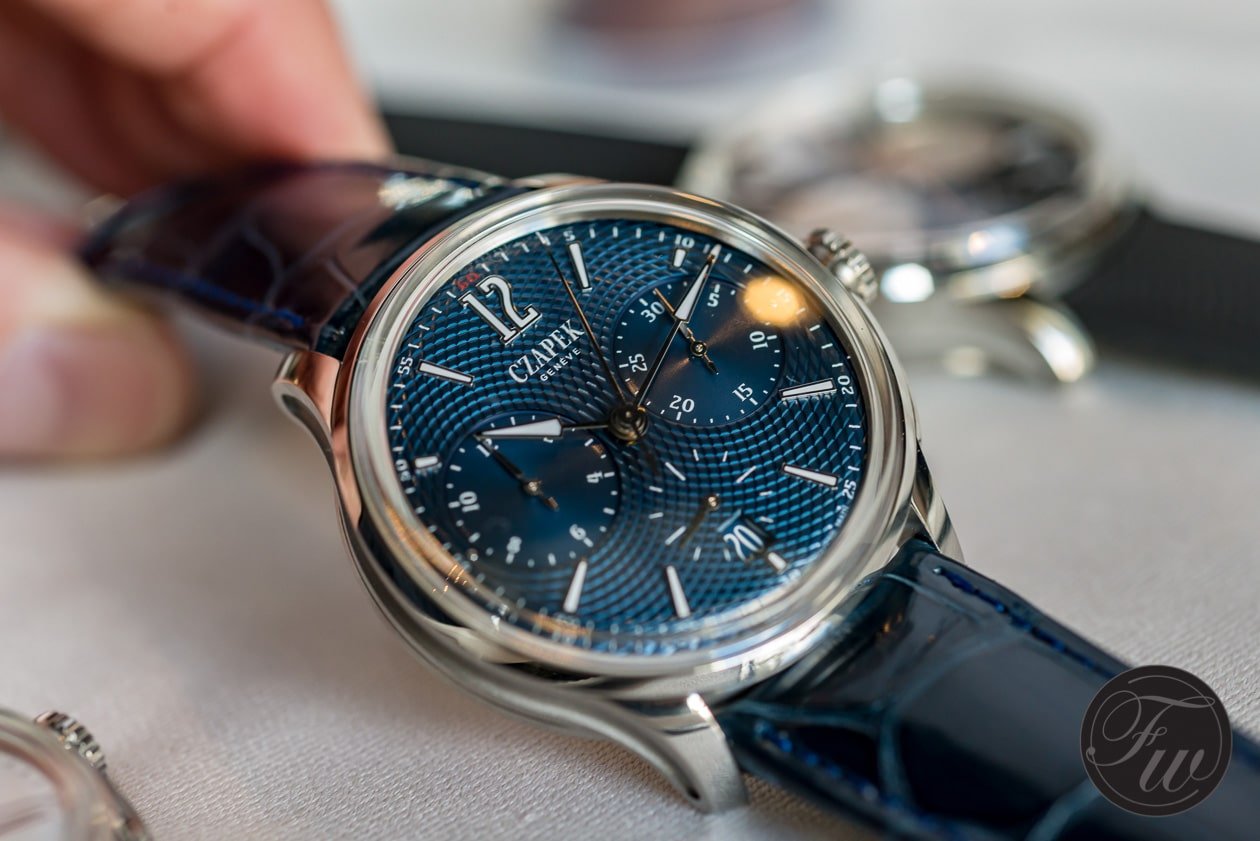 For the other two dial variations, Czapek reintroduces the fascinating ‘guilloché Ricochet’, which was introduced with the Quai des Bergues models. Crossing circular lines form a pattern of bas-relief squares. This traditional technique was made possible by the rose engine lathe, which was devised in the late Eighteenth century and became a key machine in fine dial-making. The Ricochet design (derived from the pattern made by skimming stones – faire des ricochets = to skim stones) goes back to François Czapek himself. 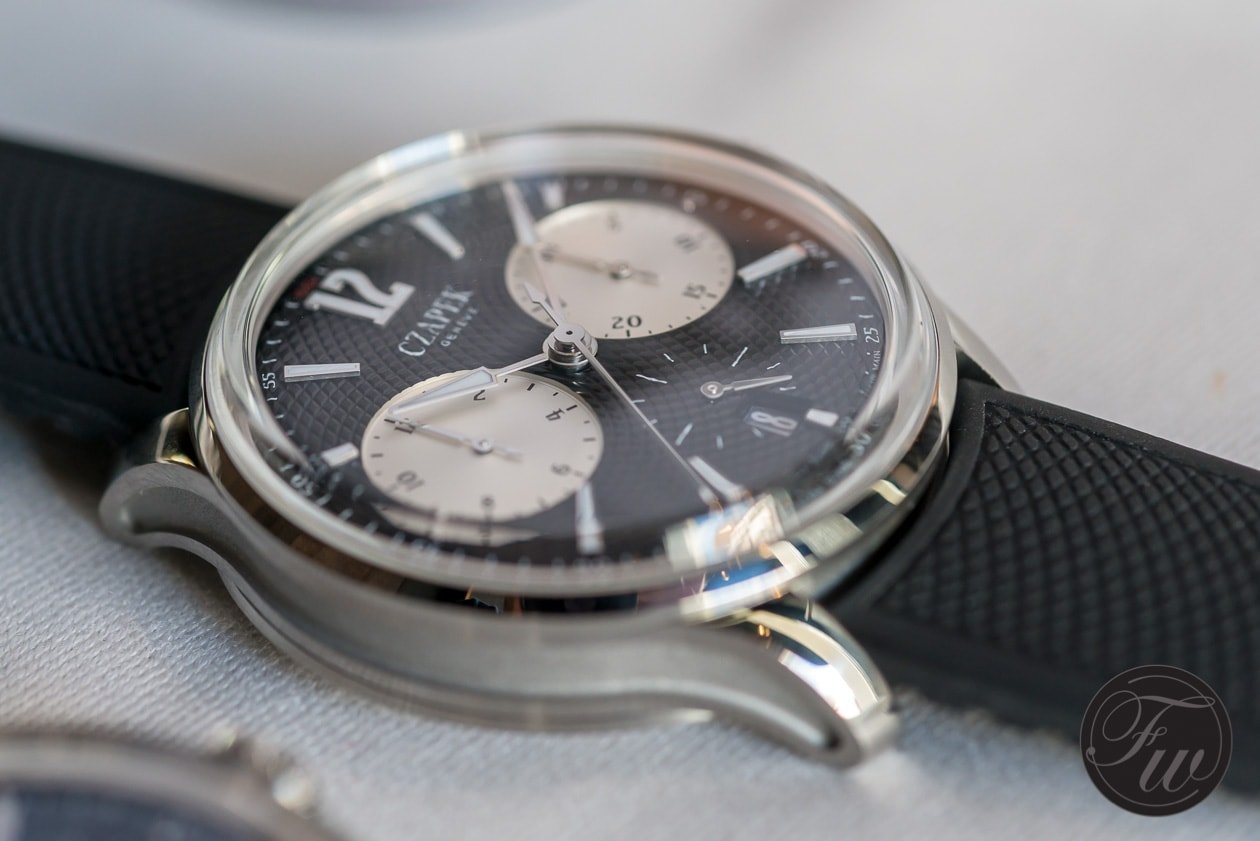 As mentioned above, the guillocé Ricochet dialed models are named L’Heure Bleue and Dioné & Rhéa, both names inspired by and related to Nature. The Heure Bleue, or Blue Hour, originally a nautical term, is a period of twilight in the morning and in the evening when the sun is below the horizon and the residual sunlight takes on a predominantly blue shade. Dioné & Rhéa are two of the four moons of Saturn, named after two Titanesses of Greek mythology. The two white moons stand brightly in the dark sky just like the two subdials in the black guilloche dial. 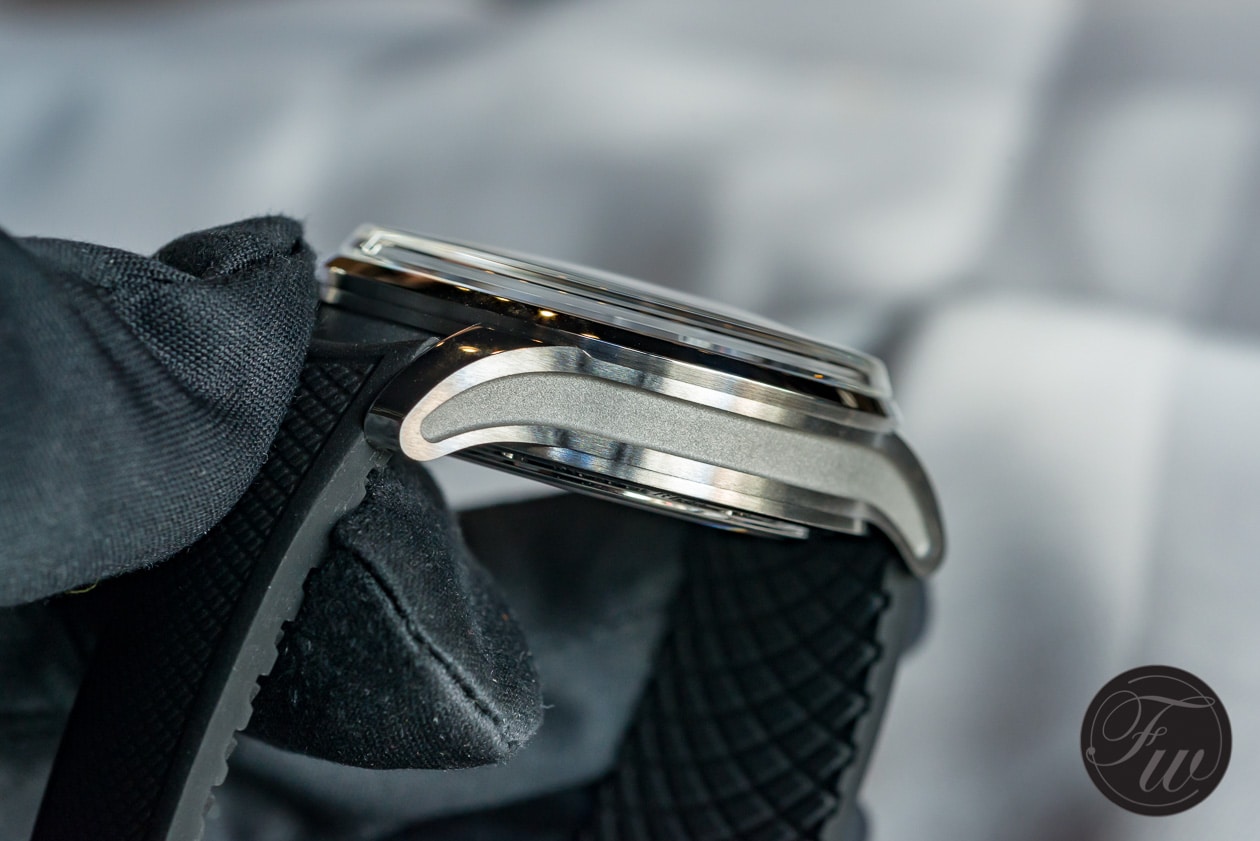 A sporty watch comes in a sober metal casing, and thus so does the Czapek Faubourg de Cracovie. It’ll be available in a stainless steel 41.5mm casing. Compared to former Czapek models the case is slightly modernized, but still sporting the meanwhile famous crown protectors. They ingeniously now serve as beautiful pushers. 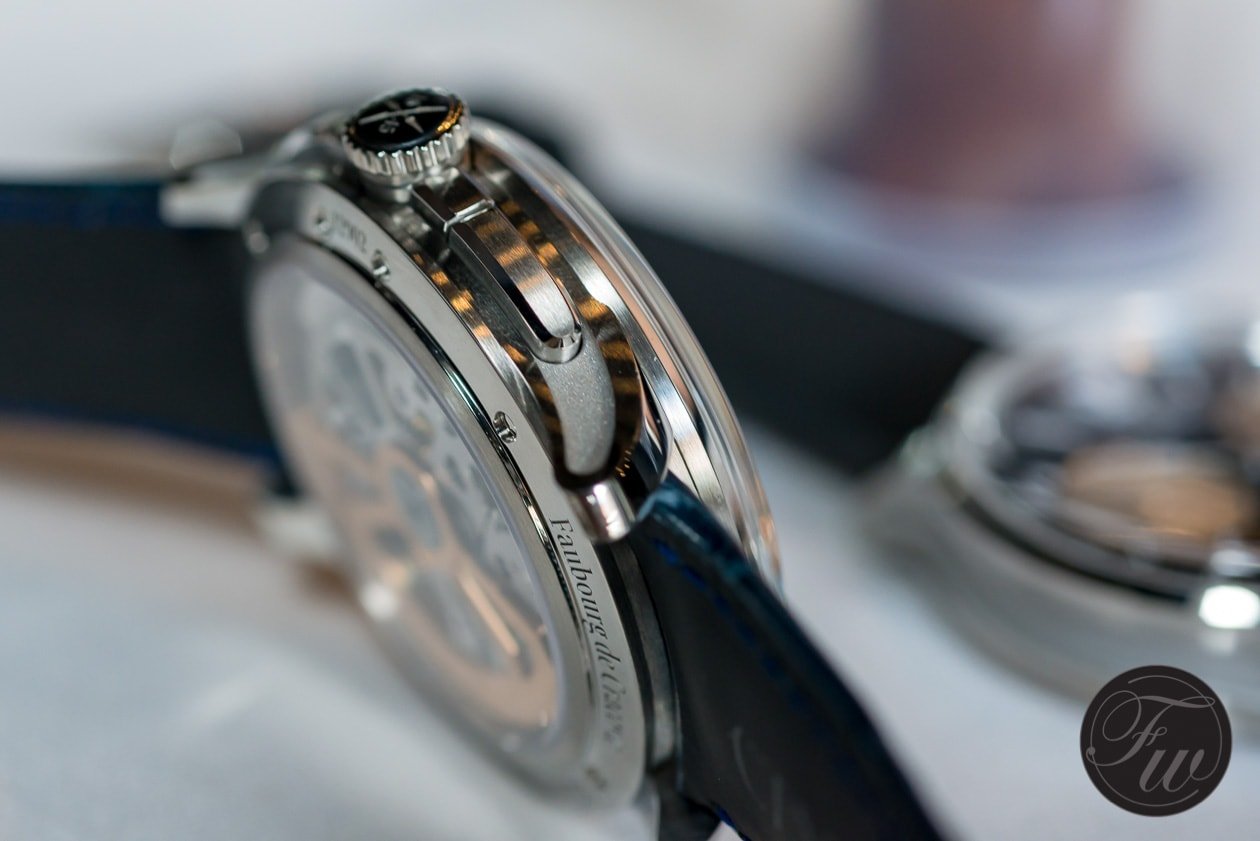 To enhance the sporty feeling, Czapek decided to use a boxed sapphire crystal. Higher than the regular domed versions used until now. And last but not least, for sporty reasons, besides leather straps, the panda dialed Dioné & Rhéa model will be available on a rubber strap as well. 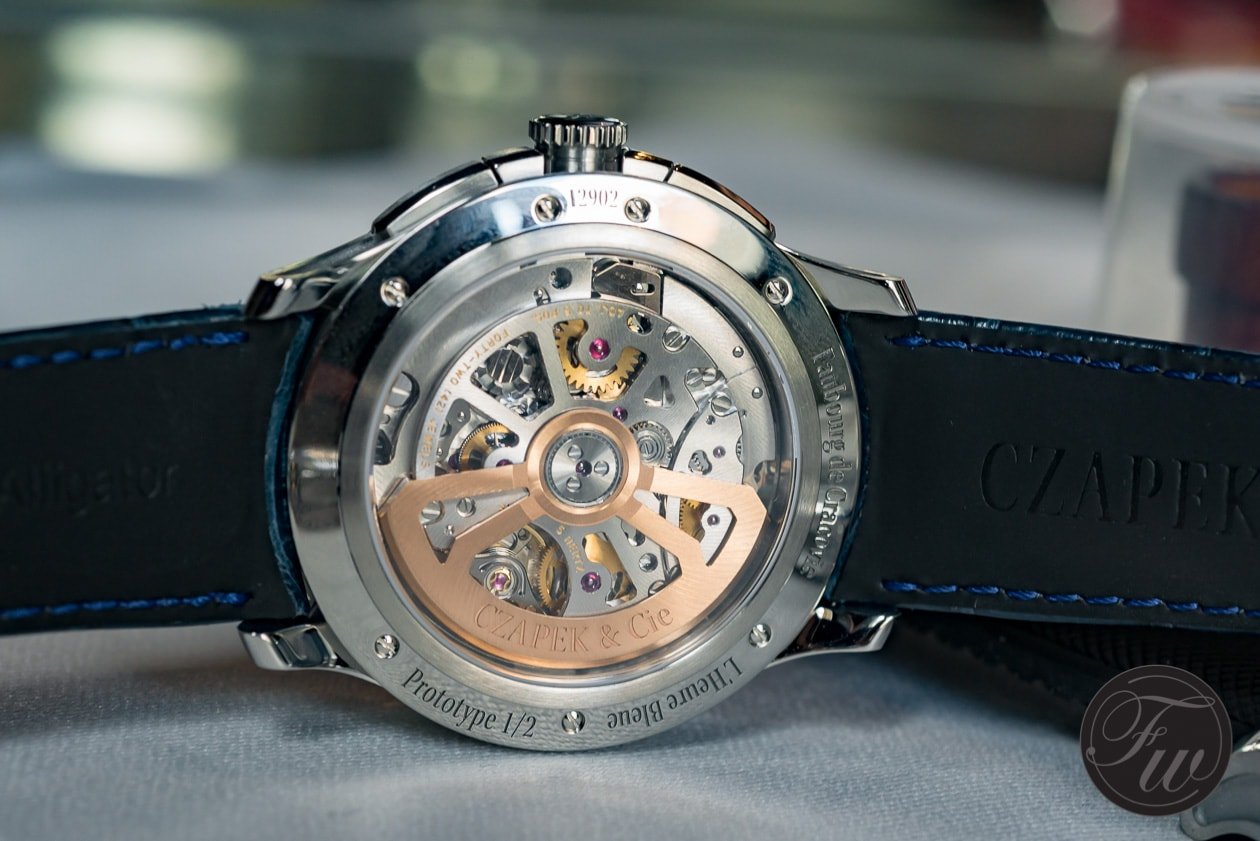 The caliber SXH3 automatic movement is Czapek’s first chronograph. This integrated column-wheel chronograph movement was made by Vaucher Manufacture Fleurier, based in the Jura mountains. It delivers 65 hours power reserve, using a single barrel. The SXH3 is a high-beat 36,000/h movement. It makes use of some of the most advanced and effective mechanical elements, like the linear hammer, which reduces wear and tear on parts and resets all the associated dials in one easy movement. A modern solution, the vertical clutch, ensures a perfect start for the chronograph hand. Finally, the diamond-blasted anthracite bridges give the final aesthetic twist to the movement, which is visible through a transparent case back. 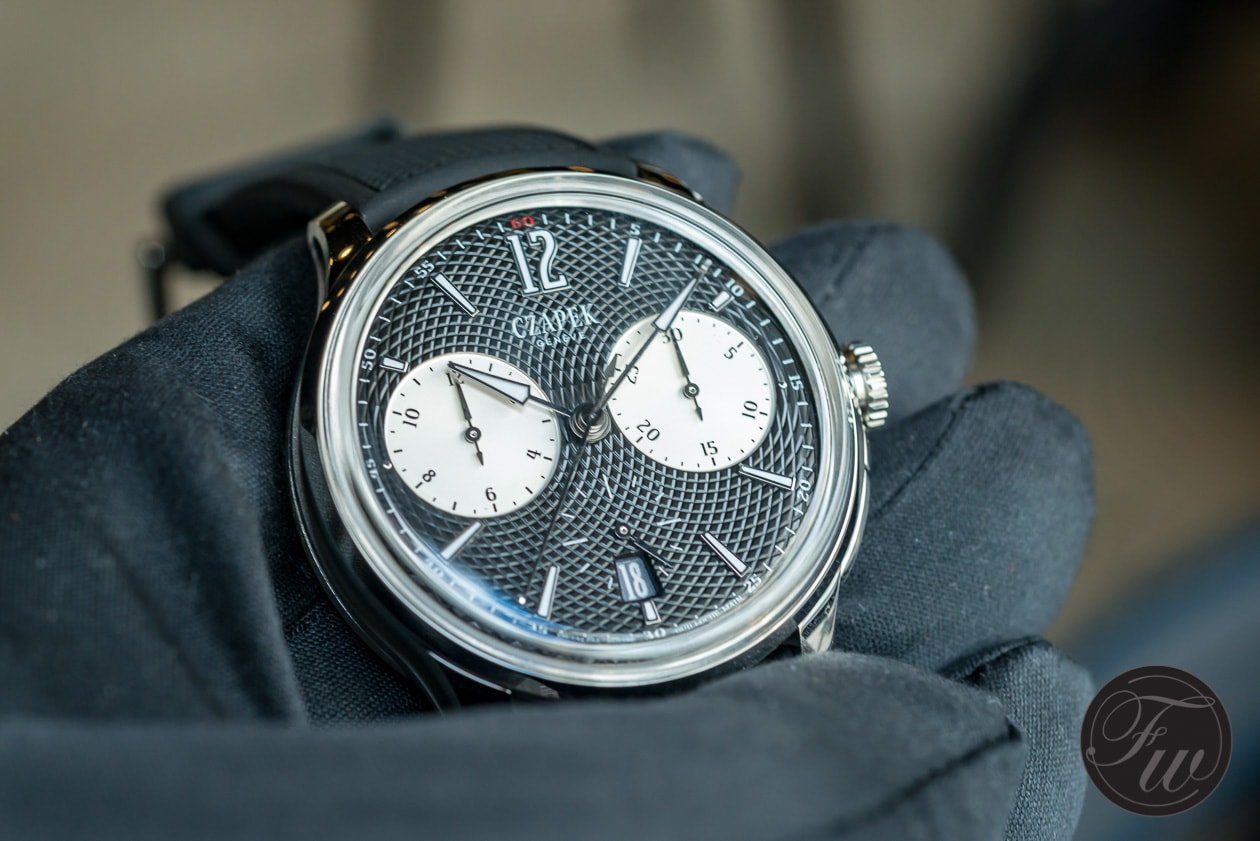 The price for the Czapek Faubourg de Cracovie chronograph will be € 24.000,= and all models will be available from June 30, 2018, onwards. For more information please visit www.czapek.com

Hot Topics
Introducing: The New Seamaster Professional 300M 60 Years Of Bond — With A Special Animated Case Back
105 comments
Are You Still After An Omega × Swatch MoonSwatch?
95 comments
It’s Time To Invest In A Dress Watch — Our Picks From Breguet, Omega, Grand Seiko, And More
73 comments
The Rolex Waitlist Conundrum — How Much Will The Price Of Your Watch Increase While You Wait?
50 comments
The Best Omega Speedmaster Watches Of 2022
40 comments
Popular
Rolex Submariner – Historical Overview Of A Diving Legend
Robert-Jan Broer
22
Rolex GMT-Master History And Overview Of All Major References
Robert-Jan Broer
18
Certina DS PH200M – Hands-On Review
Balazs Ferenczi
23