You need no introduction to this hit-making award-winning independent brand. What you must know, before calling yourself a watch buff, is the ground-breaking model Czapek introduced last year, the Antarctique Rattrapante. It was an instant sell-out limited edition. Now, mark this in your horological encyclopedia. It’s official. With a new release being revealed, the future is set: this masterpiece is here to stay.

“We are continuing to explore the many possibilities offered by this very attractive and popular new family of watches,” confirms Czapek CEO, Xavier de Roquemaurel. 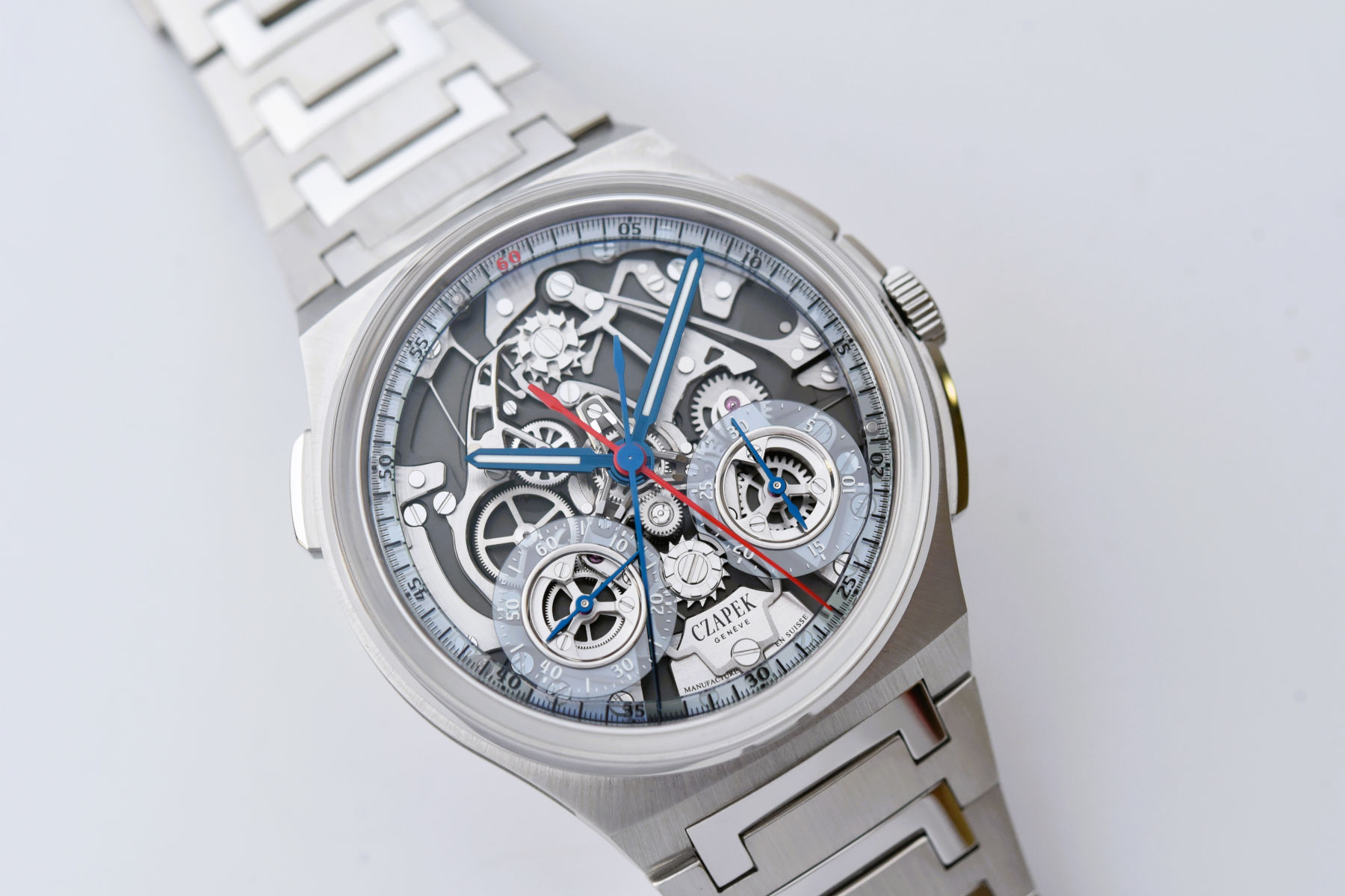 If you didn’t have a chance to get to know what was (and still is) so special about the Antarctique Rattrapante from the debut model, I don’t blame you. All 77 pieces of the original series were snapped up within an hour of going on (pre)sale. If you blinked, you almost certainly missed it. Following that, at Only Watch, the one-off “Sunrise” iteration fetched nearly a quarter of a million Swiss francs. That amounted to between three to four times its estimate. Not a bad return for the charity bonanza!

Building on the phenomenal success, Czapek has announced the launch of the latest iteration of the Antarctique, named “Ice Blue”. Given the positive reception of the recently released Glacier Blue Antarctique, I could imagine this one also striking a chord with the Fratelli. 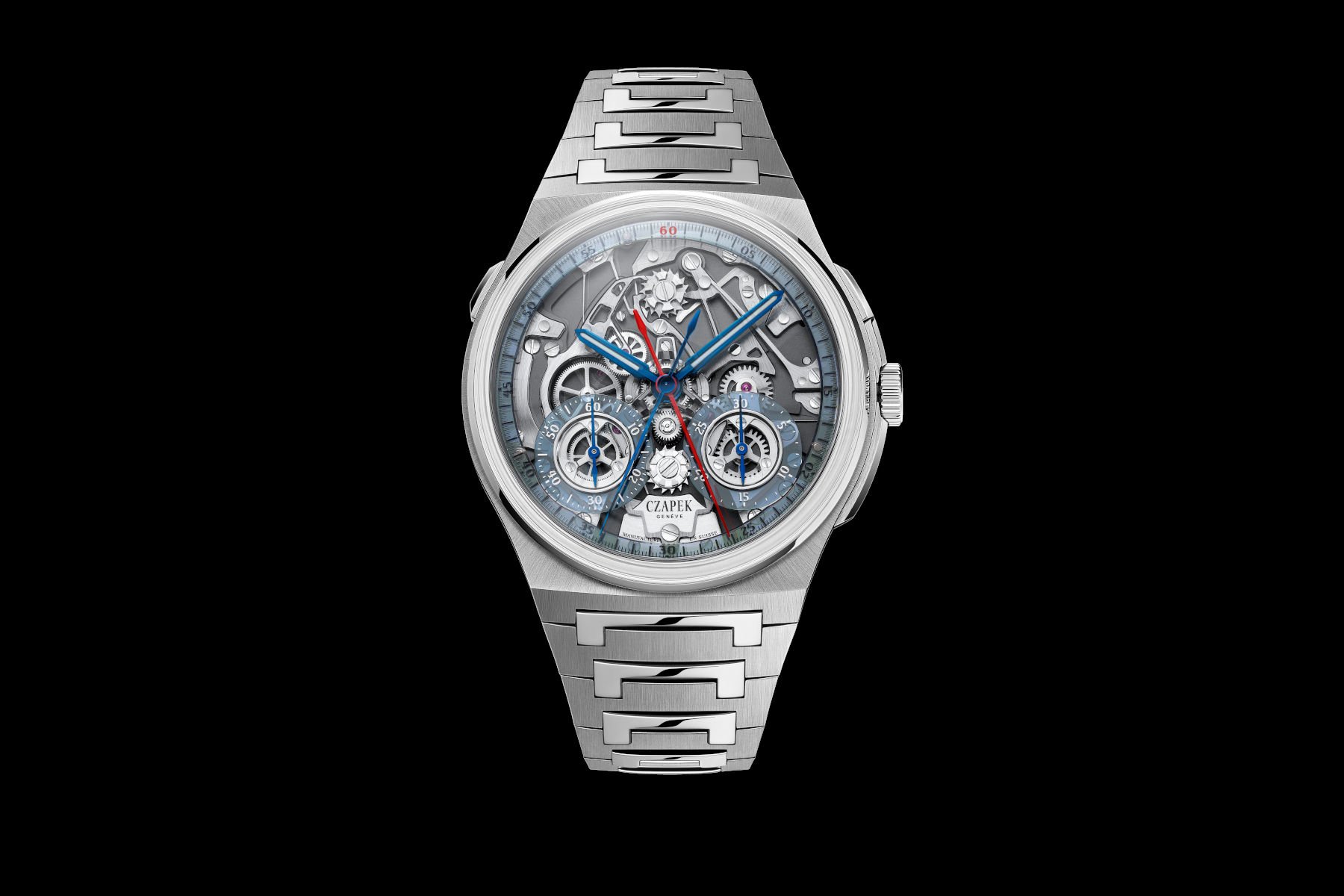 Why is it ground-breaking?

The Antarctique Rattrapante, as a feast to the eye, is visceral and needs no explanation. The engineering marvels that yield everlasting visual wonders are right in your face.

Czapek set out to create a sexy movement to lay bare on a dial, one that you’d never tire of admiring, and that seemingly never tires of attracting admirers. The result was a dial-side openwork chronograph with built-in split-seconds complication, aka rattrapante, that had never been done before. 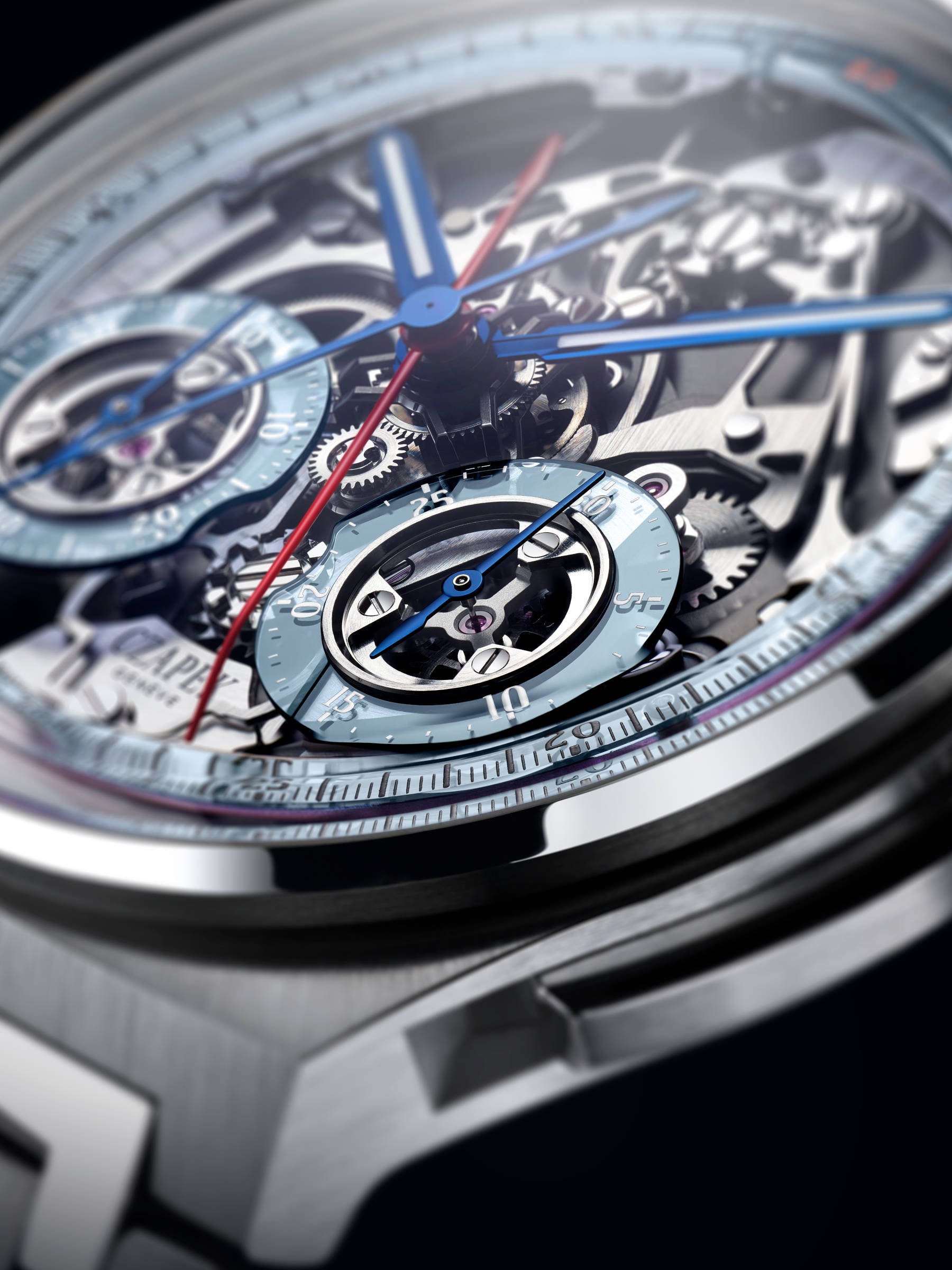 Really. Since the first-ever rattrapante was presented by Patek Philippe in 1920, no one among the upper echelons has ever ventured to make the inner workings visible on the dial side. Not F.P. Journe. Not Lange. Not even the Patek Philippe PP 5370, considered the gold standard of its kind, can claim to have done the same. If you want to get clued up on how the idea came about, check out this report from Geneva Watch Days last year. 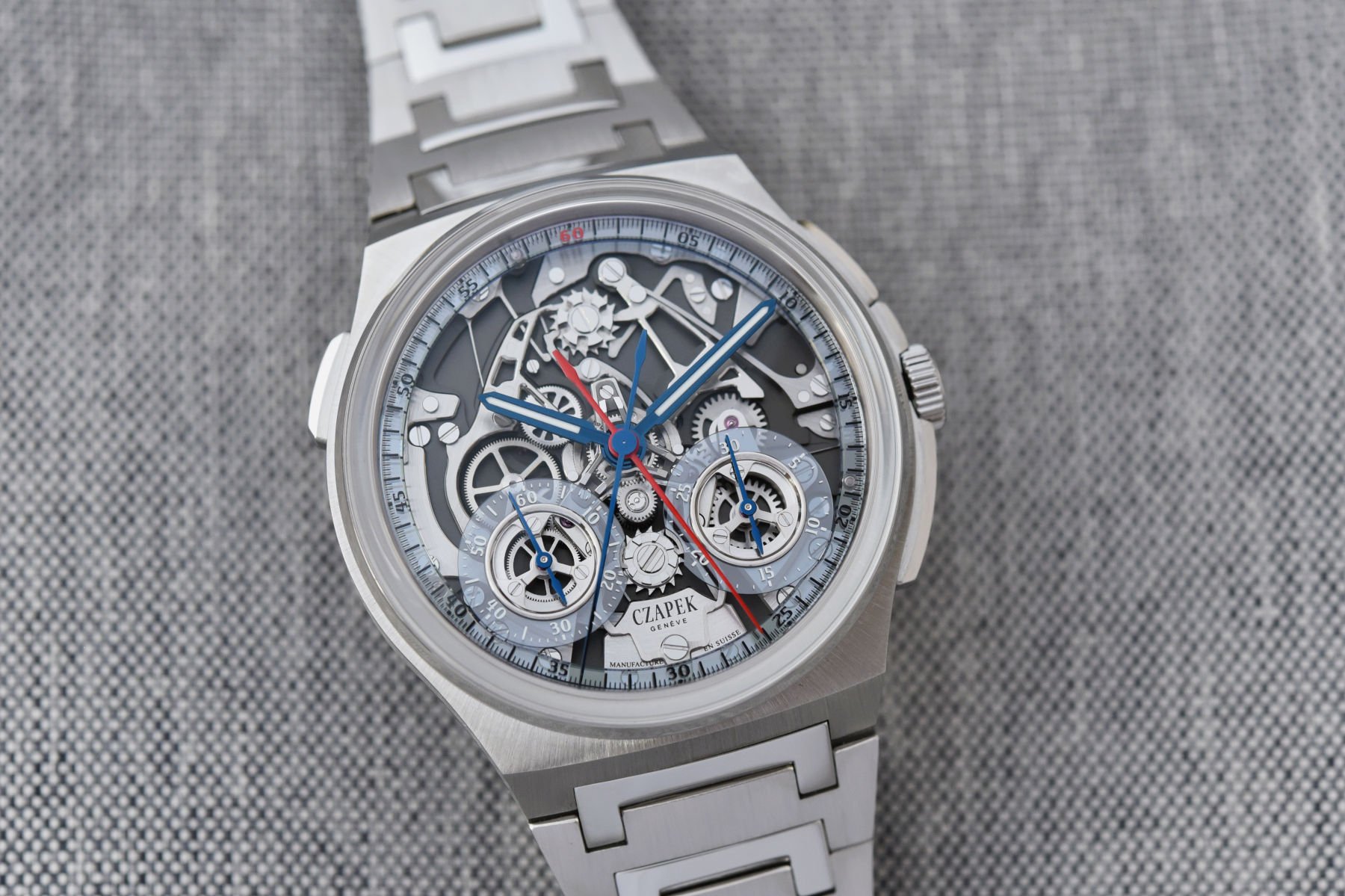 Let us rattraper (“catch up” in French) on the watch itself.

Even if movements rank second to design for you personally, I would urge you not to skip this part. The Antarctique Rattrapante is all about the engine that makes the design. Essentially, you are looking at and looking through a grand complication that places a split-seconds module below a chronograph movement, resulting in Czapek’s proprietary caliber SXH6. That structure has a depth that Czapek wants you to dive into. 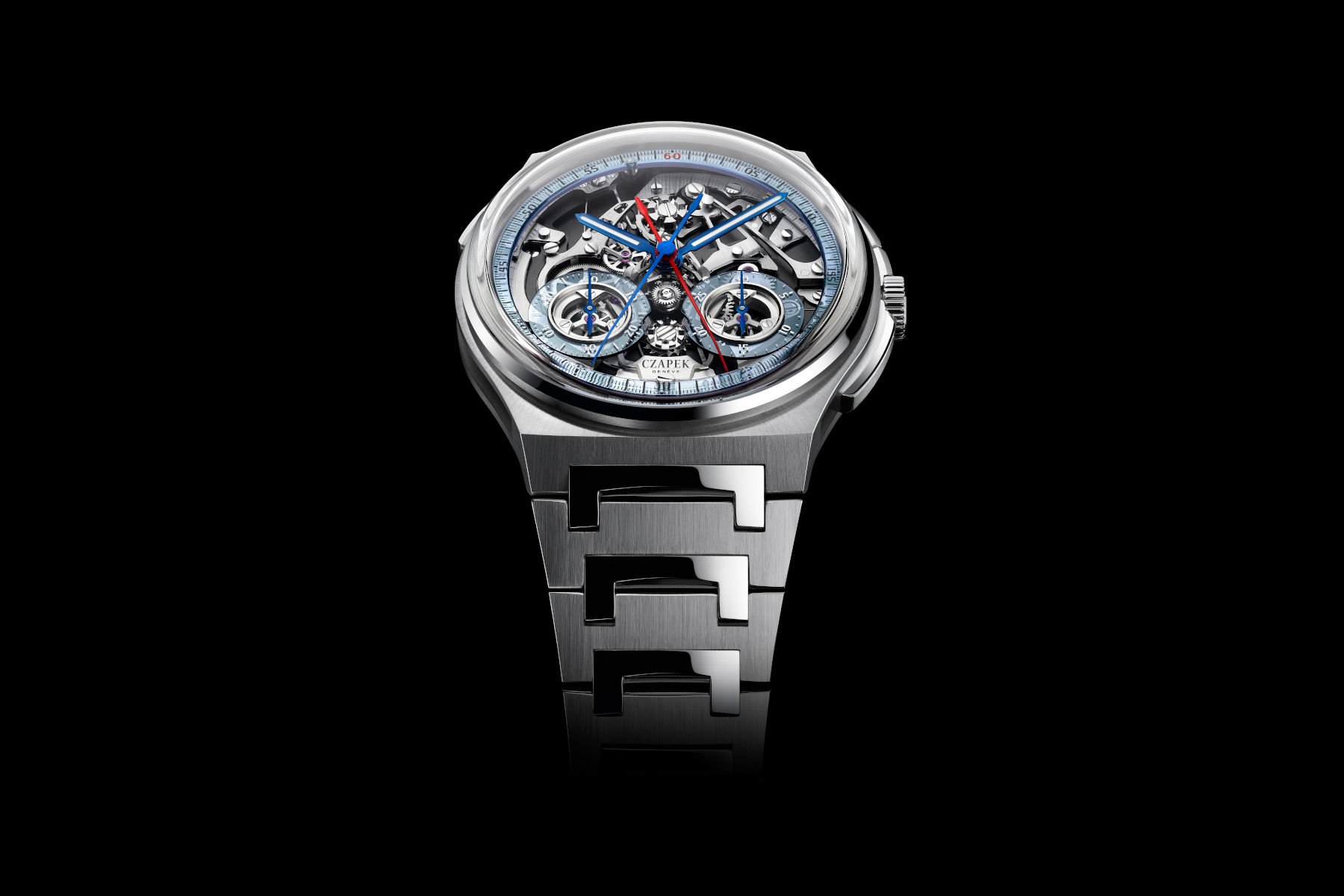 You don’t need to be a caliber buff to know that this is something special. It is plain and easy to see. Not so easy, however, is designing a mechanism that is similarly graceful (and visually lightweight) as this one with the required level of stability to handle the massive amount of torque needed to activate and drive the mechanism. That task becomes even tougher when you’re talking about an activation train mounted on a skeleton dial.

Another aspect that is visually enticing is what Czapek calls “the dance” of levers and cams on the dial, and the clamp, which instantly immobilizes one of the chrono wheels when the split-second pusher is activated. Meanwhile, the other chronograph hand continues its time-counting undisturbed. When the clamp is released, the immobilized hand then “catches up” to its companion hand.

I mean, how did no one else conclude that it would be worth putting it all on show? Perhaps they did and just couldn’t figure out how… 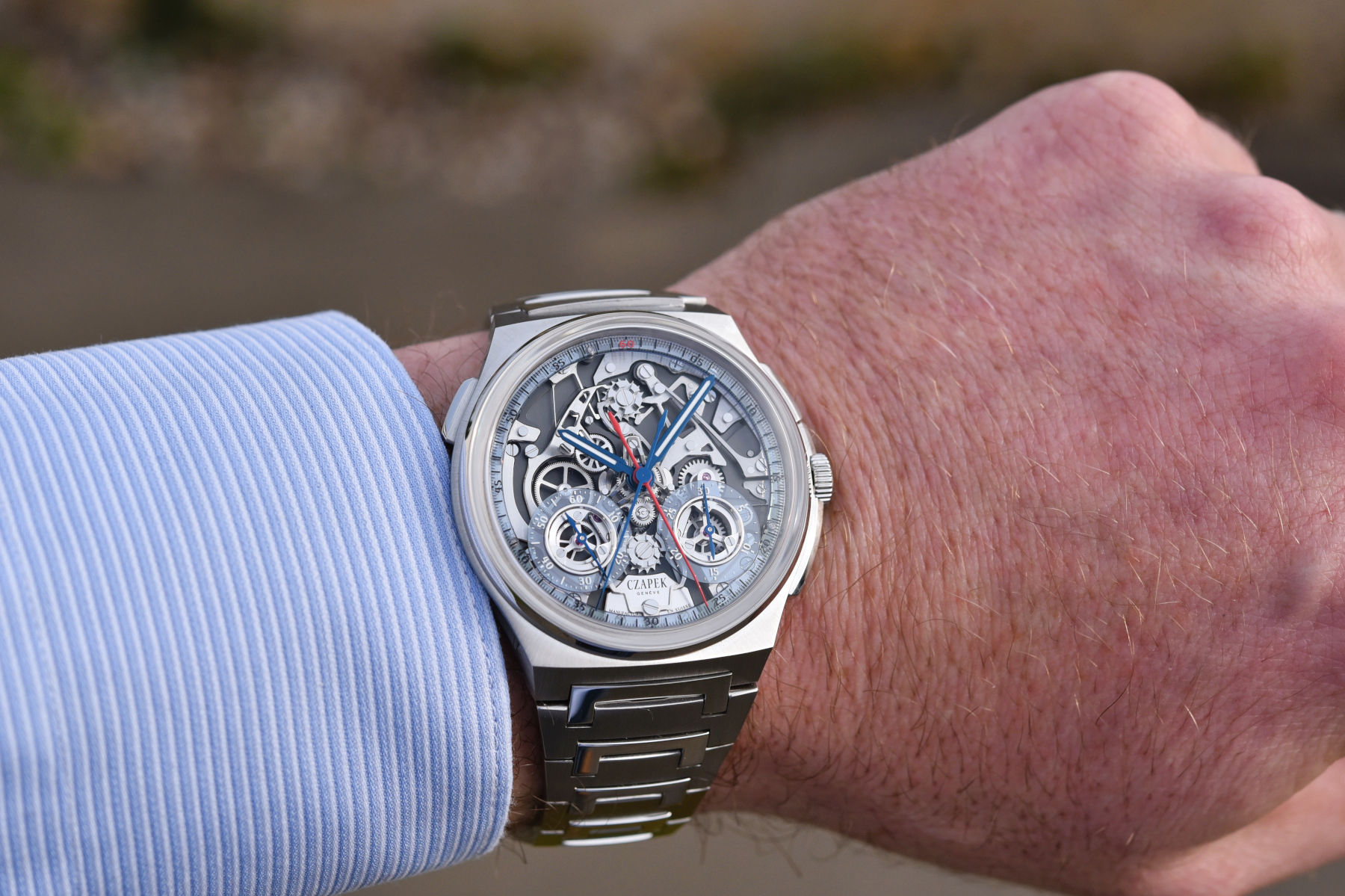 The Ice Blue is a new addition to the Antarctique Rattrapante family. The touch of fumé blue brings out the minute track and the totalizer tracks on its dial. Remaining immediately recognizable are the two Czapek-signature sub-dials and the blued hands. The new red chronograph hand is a contrastingly “active” color but ties in with the small red “60” at 12 o’clock.

When you look at the levers, the positioning of the parts, the aesthetics, this Rattrapante boasts a very modern architecture. And that’s the twist Czapek wants to give, from a design angle. It’s a classical complication expressed in an extremely modern way.

Talk about pushing modern watch design. I absolutely love what the Antarctique Rattrapante stands for in propelling Czapek forward. It’s a mechanical and aesthetic work of ark, packed in a 42.5mm case. While “traditionally” a more “male” size, it wears surprisingly well on most wrists and is nowhere near as top-heavy as one might expect from the images (and the abundance of sapphire).

The Antarctique Rattrapante Ice Blue will come in a limited edition of 99 pieces. The price? An equally cool €48,700 before taxes. Given the debut model’s instant success, it might take some strategizing to acquire one this time. It will be available from the 2nd of April from the brand’s official retailers and online at Czapek.com.