How Watches Work: What Is Damascus Steel?

We’re all familiar with stainless steel; after all, it’s the most commonly used material for cases and bracelets. It’s a hard, silver-colored metal that is relatively easy to machine and mold. Great, but what is Damascus Steel? It may look like some mythical metal, ripped straight from the pages of Tolkien’s The Lord Of The Rings. Still, the beautifully undulating patterns of Damascus Steel actually originate in the real world rather than in Middle Earth.

While you may think that Damascus Steel was first invented purely for its attractive qualities, it was actually the remarkable physical properties that made it so highly sought after. Still, it began to lose its prominence around the turn of the 18th century. Today, especially in the watchmaking, jewelry, and knifemaking industries, we are starting to see Damascus steel make a bit of a comeback. But what actually is Damascus steel? 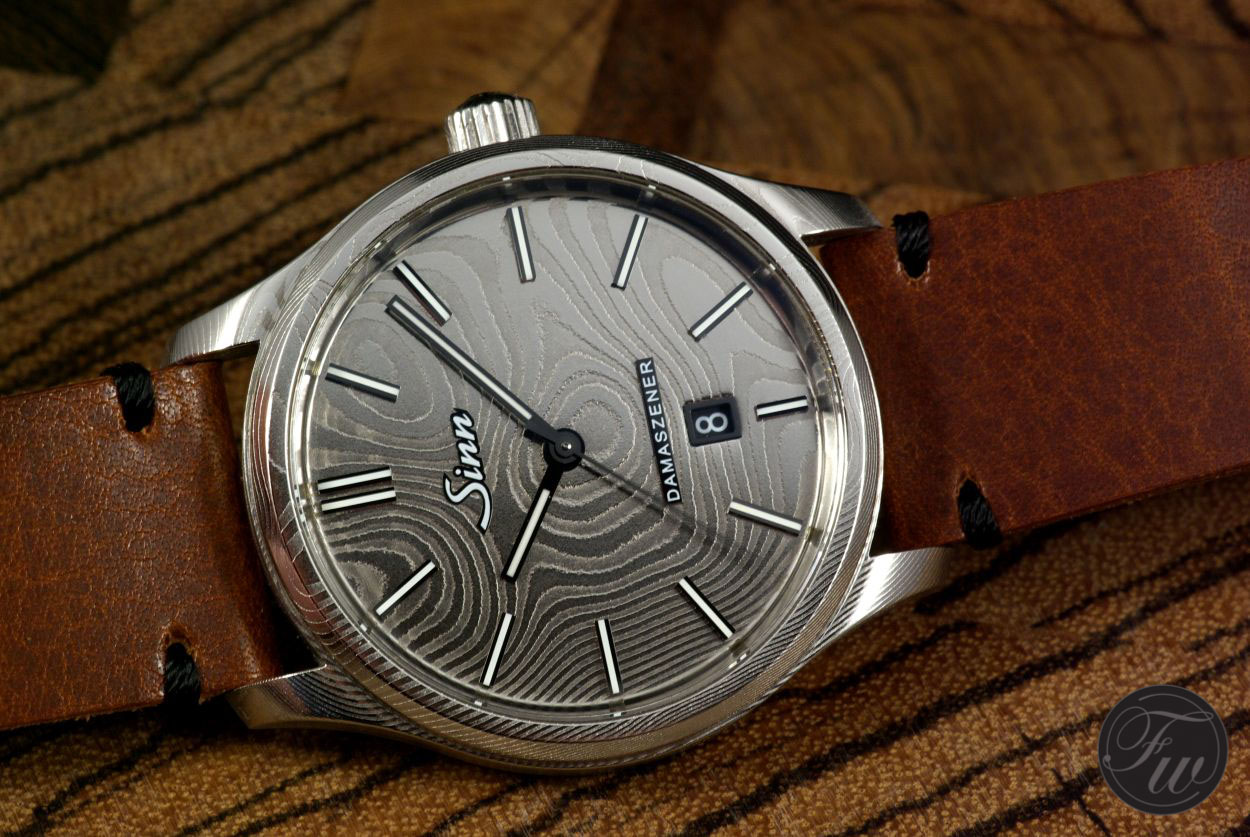 What Is Damascus Steel

To answer that question, we need to start at the beginning. Steel is an alloy of iron with a minimal amount of carbon. Before the advanced production techniques of the modern-day, ancient weaponsmiths found it challenging to produce consistent steel alloys. When they melted iron ores, the resulting metals had different properties. Some were produced a robust steel alloy, whereas others made flexible steel alloys.

On their own, these resulting alloys were not practical for making swords and weapons. So, the weaponsmiths overcame the issues by forging together alloys of contrasting properties. For example, they would take flexible and robust steel and forge them together in alternating layers in a process known as pattern-welded Damascus. This methodology of forging Damascus steel is still used today. 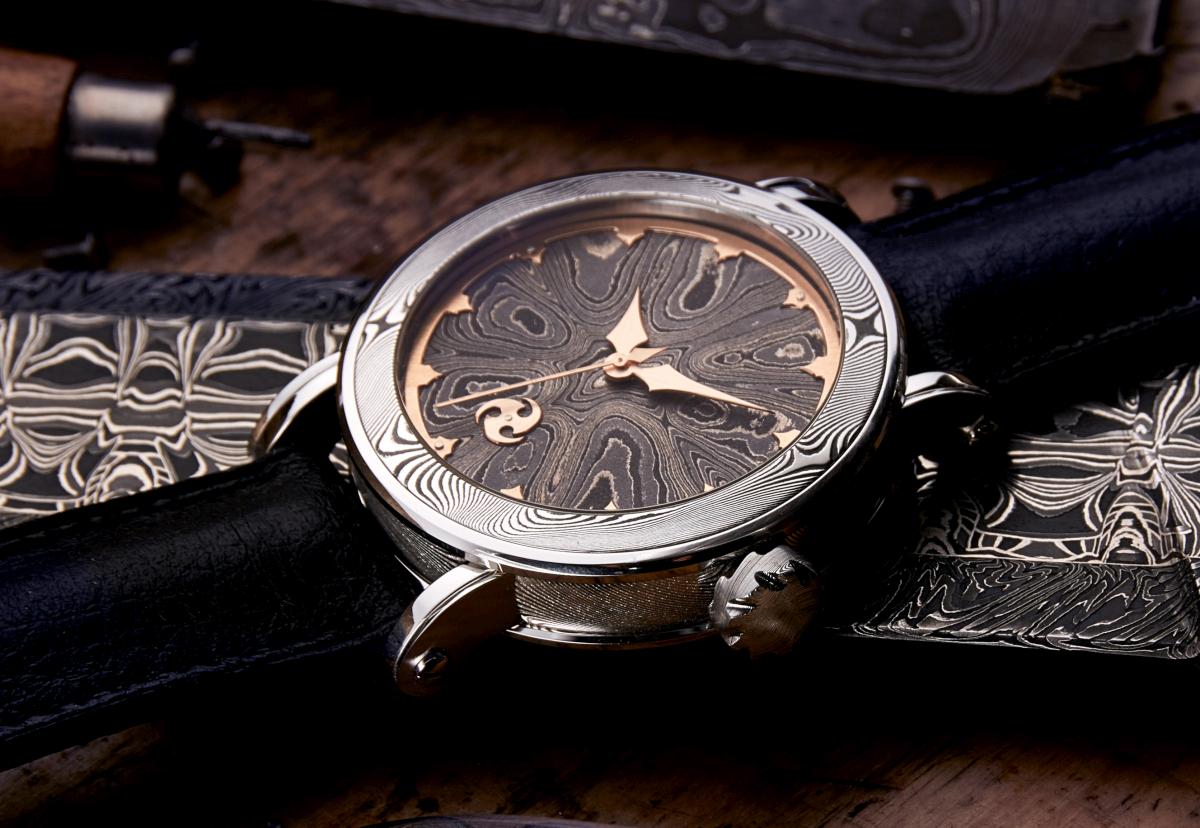 Modern-day Damascus steel, however, is not exactly the same as its ancient-day counterpart. Centuries ago, it went by a different name: wootz steel. Wootz steel was considered some of the finest quality steel in the world. It was prized by weaponsmiths and soldiers alike for the properties it imparted. Only the best wootz steel was capable of making strong, stable, and flexible weapons.

Wootz steel was believed to have been first produced in South India in present-day Kodumanal, Erode, Tamil Nadu. Metalworkers forged it from specific iron ore with an exceptionally high carbon content (around 1.5%) and other unknown trace elements. Trade between South India and Sri Lanka with the Arab world through the Arabian Sea introduced wootz steel to Arabia. Where the wootz steel ingots then found their way onto Damascus in Syria. It was here that Syrian weaponsmiths forged the wootz steel into swords and other weaponry, hence the name.

…a victim to function over form.

Sadly, the recipe for forging true wootz steel has long been lost to history. By the end of the 19th century, the production of wootz steel had dried up. Advancements in metallurgy allowed newer refined steel alloys that created a product that worked better than the traditional wootz steel. It fell to the wayside, a victim to function over form. 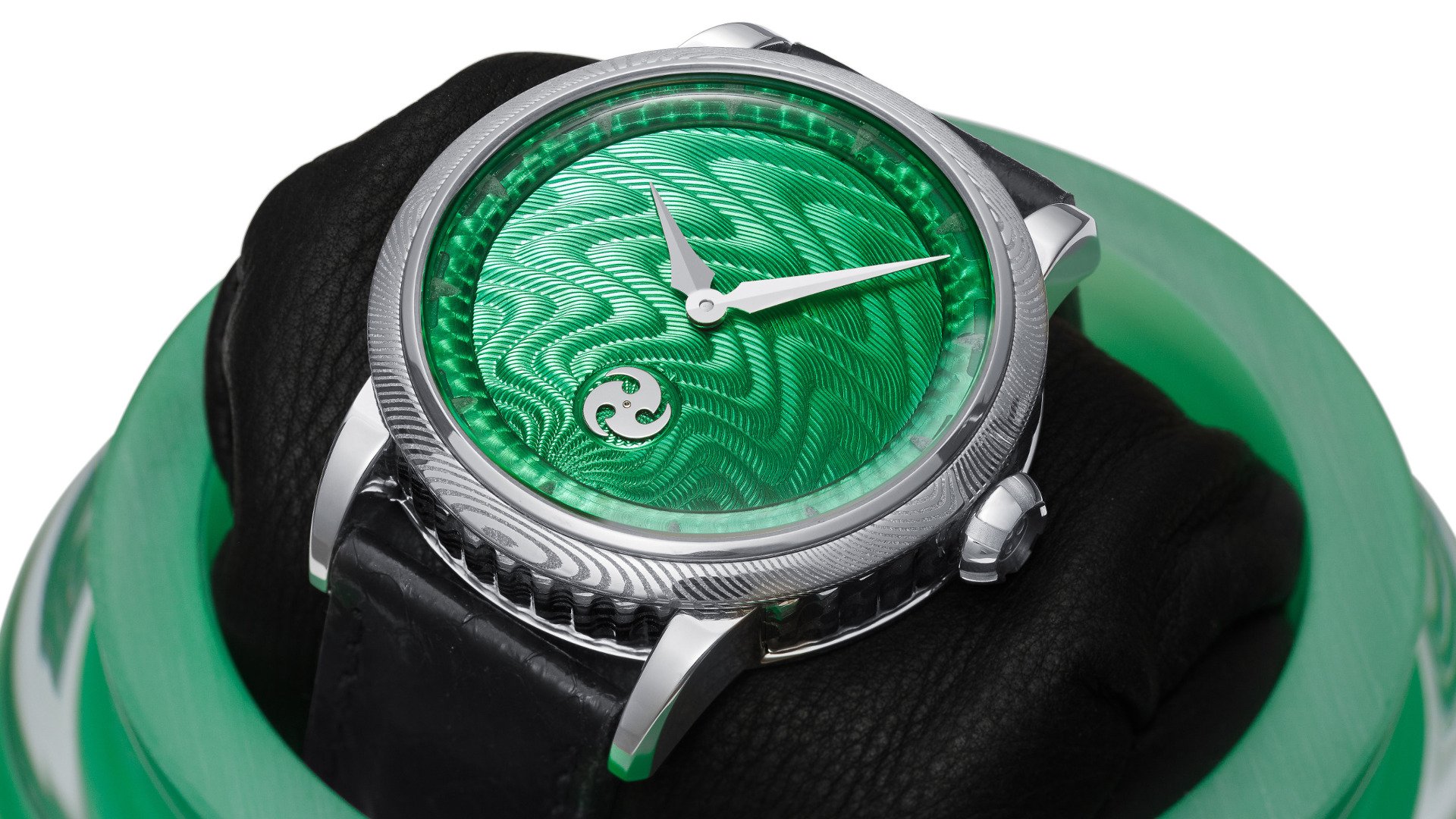 So let’s talk about watches

When we talk about watches and steel, we usually talk about austenitic stainless steel alloys with low carbon content. Watch cases need to be resistant to corrosion and not hold magnetic charges due to magnetism’s effect on movements.

Historically, Damascus steel was made from high-carbon steel alloys that would not be suitable for watch cases. The physical properties that are so important in swordmaking are totally irrelevant and useless for watchmaking. In fact, they are detrimental to making a watch case. Instead, modern Damascus steel is made using similar techniques with modern austenitic steel alloys, which are more suited to making watch cases. 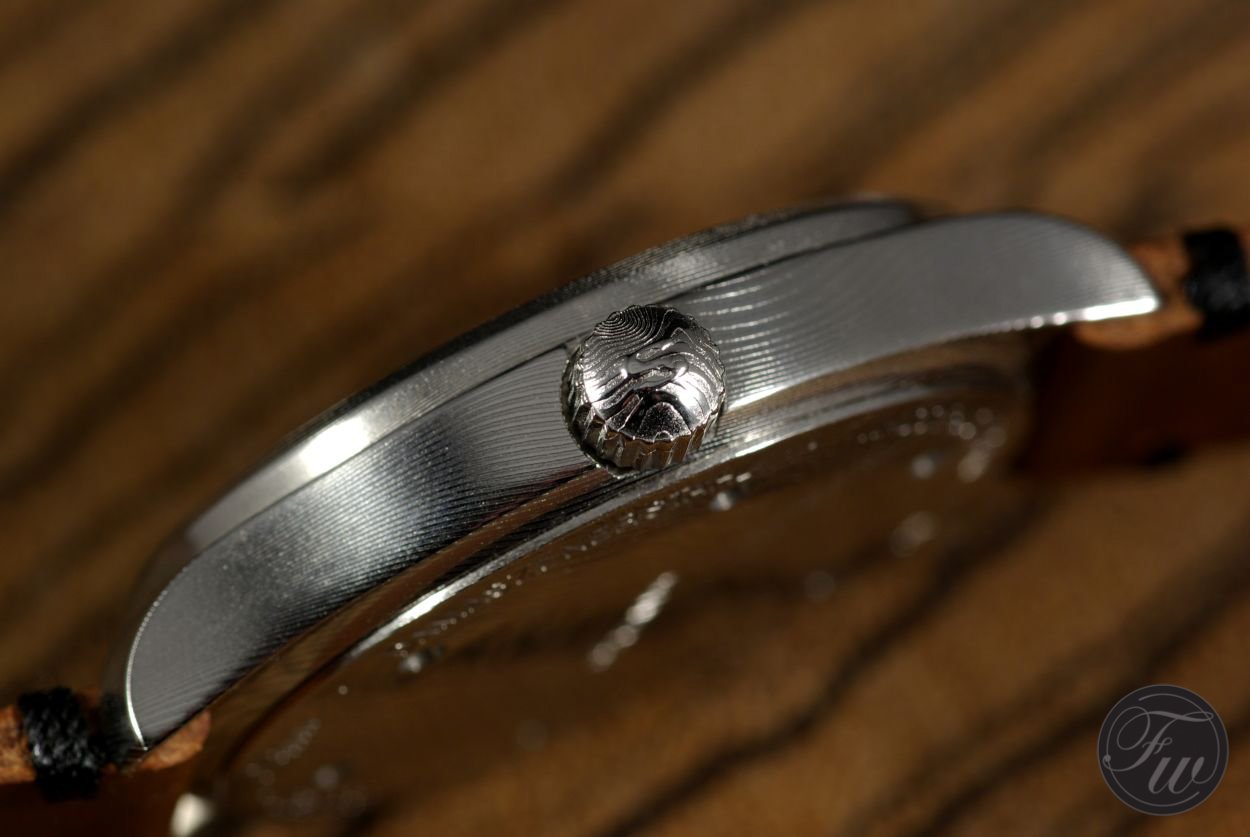 So how do we make Damascus steel now?

Most modern Damascus steel uses pattern welding. Pattern-welded Damascus steel is created by forging alternating sheets of high-carbon and low-carbon austenitic steel together into billets. Further working through a series of stamping, twisting, and hammering makes the patterns and many layers. Billets with different combinations of patterns and layers can be further forged together to create endless complex designs.

This process allows the various layers of the different steels to be revealed at different points during the surface etching. The different layers etch at varying rates, thus creating the iconic Damascus steel patterns. 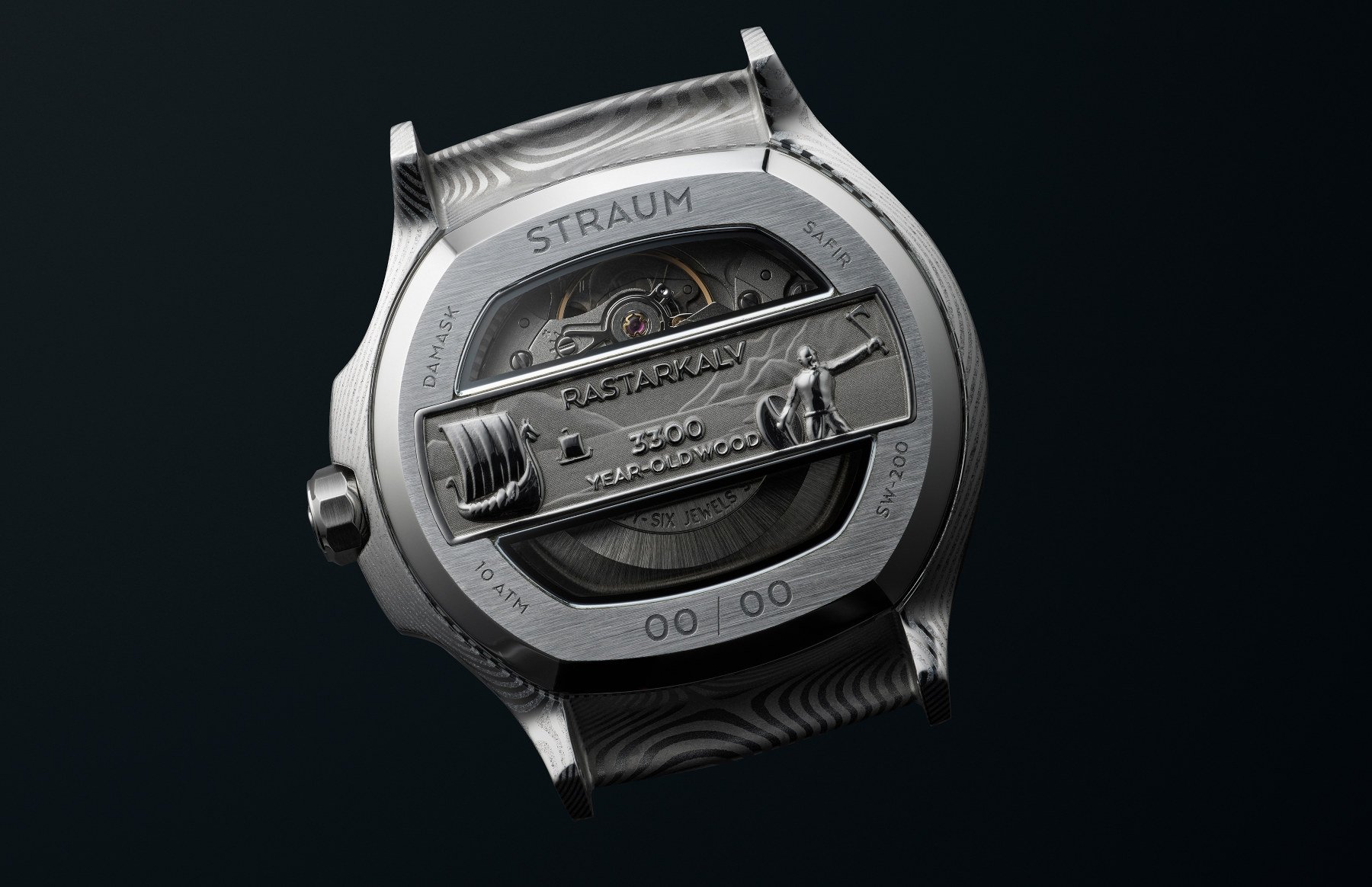 Want a Damascus steel watch of your very own?

You won’t commonly find Damascus steel used for watch cases, but it’s slowly making a comeback. As watchmakers look for new materials to add a touch of flair to their designs, we could start to see them use it more frequently.

If you’re looking for an example, Sinn used Damascus steel to significant effect in its 1800 Damaszener models. Norwegian independent brand, Straum, used Damascus steel to showcase its now sold-out flagship watch, the Rastarkalv, featuring a dial made of 3,300-year-old fossilized wood. Finally, GoS Watches from Sweden uses Damascus for its watch cases too. All three brands are well worth checking out!

What’s your take on Damascus steel watches? Do you think it’s cool and classy, or do you find it strange and over-the-top? Let’s discuss in the comments down below!

Hot Topics
Introducing: The New Seamaster Professional 300M 60 Years Of Bond — With A Special Animated Case Back
102 comments
Are You Still After An Omega × Swatch MoonSwatch?
74 comments
It’s Time To Invest In A Dress Watch — Our Picks From Breguet, Omega, Grand Seiko, And More
70 comments
Sunday Morning Showdown: The Tudor Pelagos Provocation — Pelagos Vs. Pelagos 39
55 comments
The Rolex Waitlist Conundrum — How Much Will The Price Of Your Watch Increase While You Wait?
48 comments
Popular
(From The Archives) Shut Up & Read The Truth About Cartier Watches
George Cramer
21
#TBT Seiko H558 Arnie – One Serious Diver
Michael Stockton
25
Hands-On With the Seiko Prospex SRPC91K1 – Save The Ocean
Robert-Jan Broer
15