And not a travel clock in sight!
Dave Sergeant
comments 23
Share

It’s been a long time, but travel is slowly starting to open up again. After not stepping on an airplane for 18 months, I have found myself arranging four trips to three different countries in a relatively short period of time. Different countries mean different time zones, and I’ll be straight up in admitting that I lack the basic memory skills to remember time differences. With that in mind, I have recently found myself frequently looking at travel watches — the perfect tool for those who travel and want a convenient way of keeping track of time wherever they may land.

Travel watches come in many different shapes and sizes, from the instantly recognizable world-timers to the traditional and somewhat more common GMT watches. In this article, I will take a look at my top four travel watches. So, if you’re hoping to see a travel clock on this list, prepare to be disappointed… 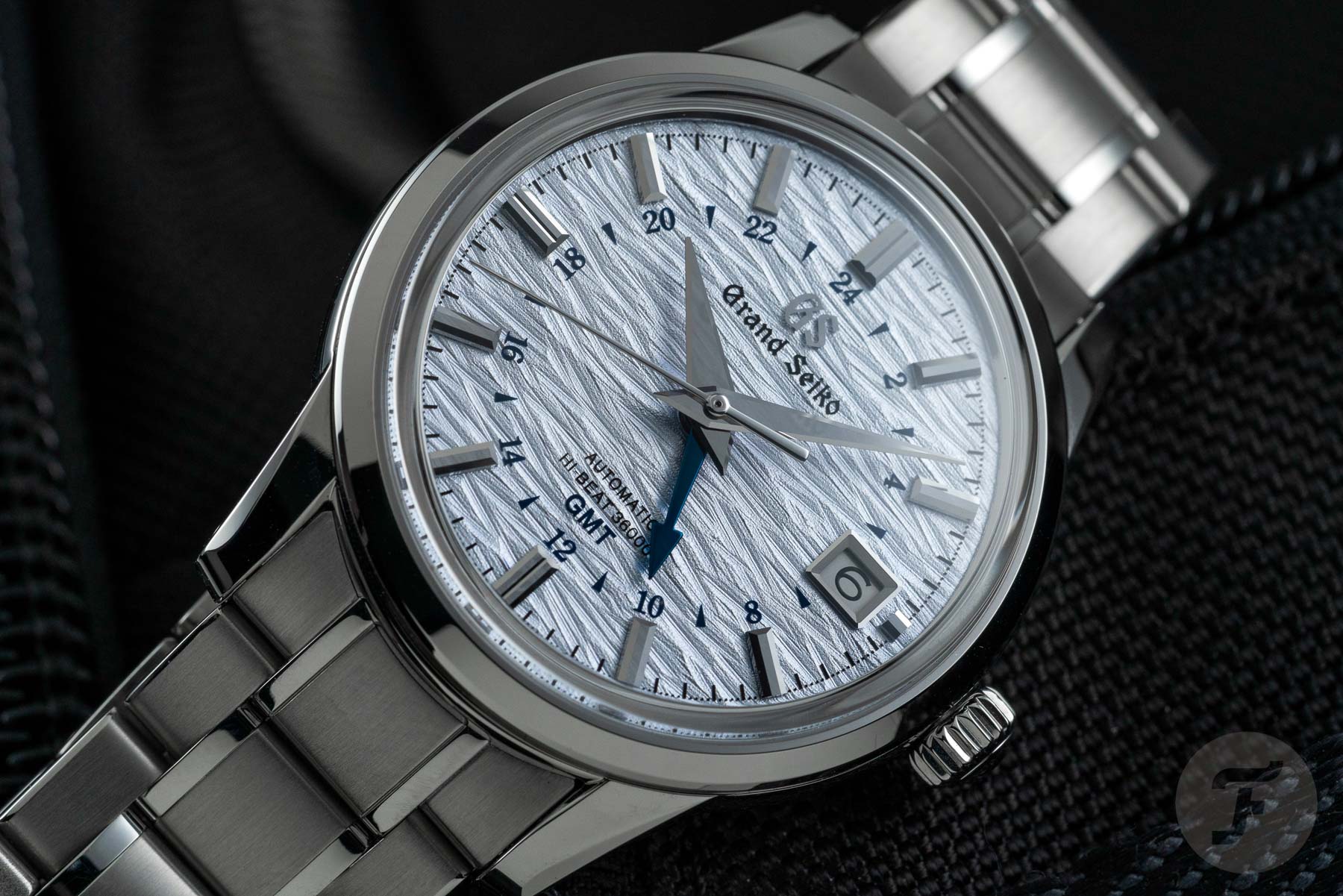 As a man who has an appreciation for the finer things, I’d be remiss not to mention Grand Seiko on this list, so why not start there? I have previously referred to the Japanese brand as the “master of dial textures”. Shortly after joining the Fratello team, I bought myself a Grand Seiko SBGA407 Skyflake to commemorate the occasion. The “flake” textures achieved by Grand Seiko are quite simply stunning. It was a close battle between the Snowflake and the Skyflake, but in the end, it was the Skyflake’s wonderful blue rapture that drew me in.

By this logic, it’s understandable that I am drawn to those familiar blue hues on the SBGJ249. While the dial texture is not a part of the flake family, it’s still incredibly visually appealing. It’s basically a horizontal version of the Silver Birch’s dial texture, but it’s that rotation, along with the blue, that makes me think of seeing the ocean’s shimmering waters while on holiday. Like the rest of the world, I’ve not been on a beach holiday for quite some time, so there’s also a little nostalgia mixed in there too. 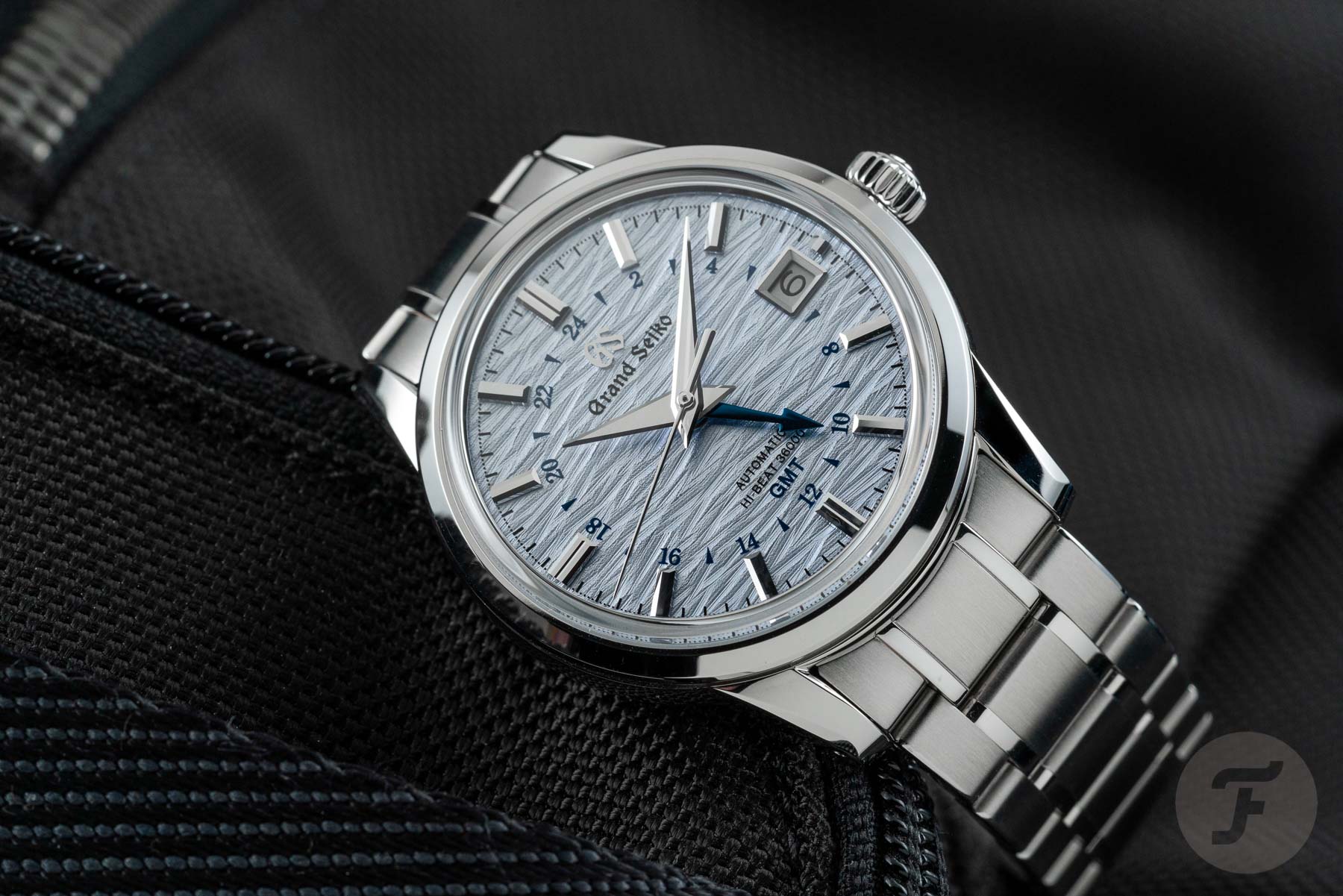 This particular watch is part of Grand Seiko’s recent “Four Seasons” collection. The Shōsho name is Japanese, and, like most of Grand Seiko’s watches with Japanese names, its meaning is quite beautiful: according to Grand Seiko, it refers to the time when “high summer approaches and, at last, the rainy season ends. The warm wind creates delicate ripples in the many thousands of lakes and ponds that shimmer in the early summer sun throughout Japan.” This poetic inspiration is a nice touch, but what about the more technical aspects? Any Grand Seiko owner will be able to tell you that the brand’s watches are not just pretty on the inside.

The in-house Hi-Beat Caliber 9S86 is a technically proficient engine. This Hi-Beat movement operates at 36,000vph, has 37 jewels, and has a power reserve of 55 hours. It offers an accuracy between +5/-3 seconds per day on average. For reference, those tolerances are tighter than Swiss chronometer standards. The hour hand can be set independently, so this watch operates as a “true” GMT. Winner!

I am fortunate enough to already own one of Grand Seiko’s Spring Drive masterpieces in the form of the Skyflake. Still, I can’t help but feel that the SBGJ249 would be an excellent companion for it, while at the same time allowing me to add a Hi-Beat movement to my collection. The blue dials would perfectly complement each other, don’t you think? 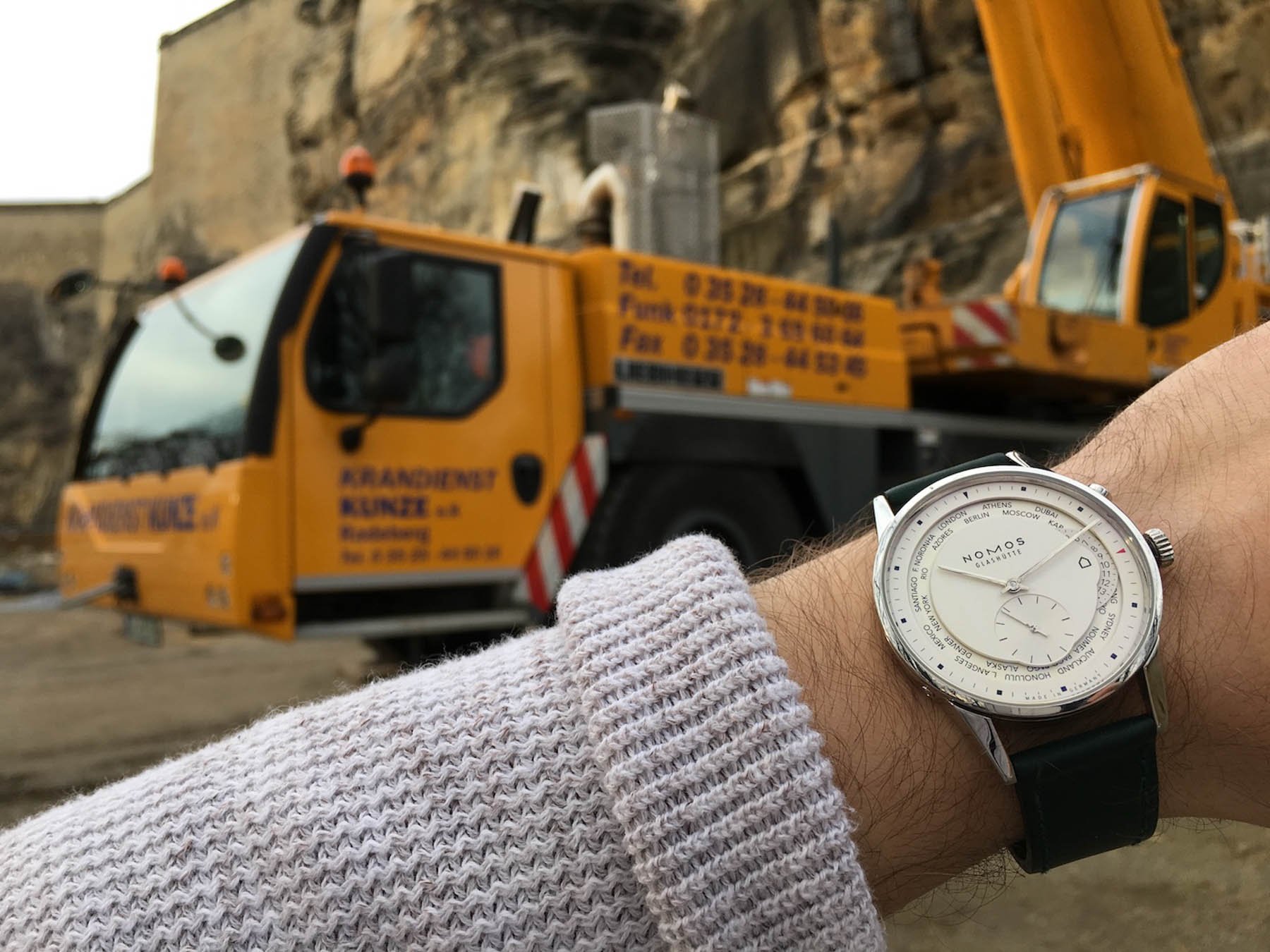 Ah, NOMOS. I have a funny relationship with the German masters of Bauhaus design. My good friend and colleague Rob Nudds once said, “NOMOS may not have written the book on design, but they certainly penned the sequel.” It wasn’t until I had the chance to handle some of the German brand’s watches that I began to understand what he meant by that. The first watch from the brand that I got to experience was, as fate would have it, the one making its way onto this list today.

I know for a fact that my feelings toward the Weltzeit are mirrored by my colleagues at Fratello HQ. The Weltzeit is by far the most excellent model in the NOMOS catalog as well as an excellent travel watch (in our shared opinion). That’s not to pooh-pooh the other watches; in fact, I believe it does quite the opposite. To say that the Weltzeit is that much better than the Orion, the Club Campus, the Tangente (the list goes on) just shows how good the Weltzeit really is. 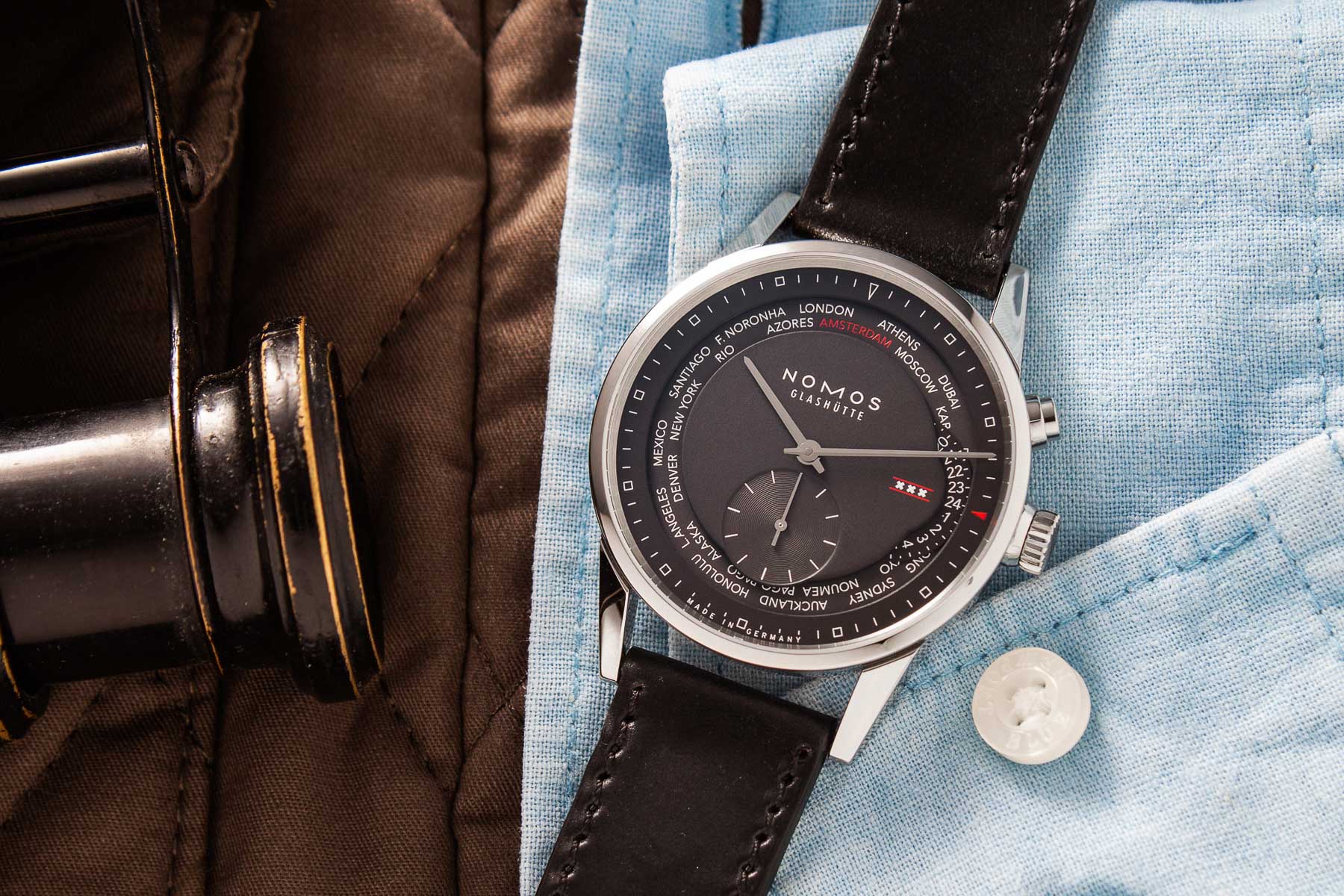 Many people, myself included, commonly mistake the Weltzeit for a world-timer watch. But it wouldn’t be 100% accurate to call it that. At least not according to the strict definition of the complication. It’s more of a dual time zone watch, like a GMT. The city ring at the dial’s periphery acts as a reference point. By using the button at 2 o’clock, you can advance the hour hand in 1-hour increments. You can’t immediately pick off the times for multiple time zones simultaneously because a couple of them are always obscured by the 24-hour home time ring at 3 o’clock. The Weltzeit’s operation is incredibly intuitive and it was a real joy to operate. The audible “click” sound from operating the button is extremely satisfying. Seriously, get your hands on one and give it a go!

If you decide that the Weltzeit is to be your travel companion, there are a few options to choose from. The white dial is a classic, and the blue is modern and trendy. The limited-edition NOMOS made for Ace Jewellers in Amsterdam is an edgy number in all black and although it is entirely sold out, you might get lucky and find one on the pre-loved market. 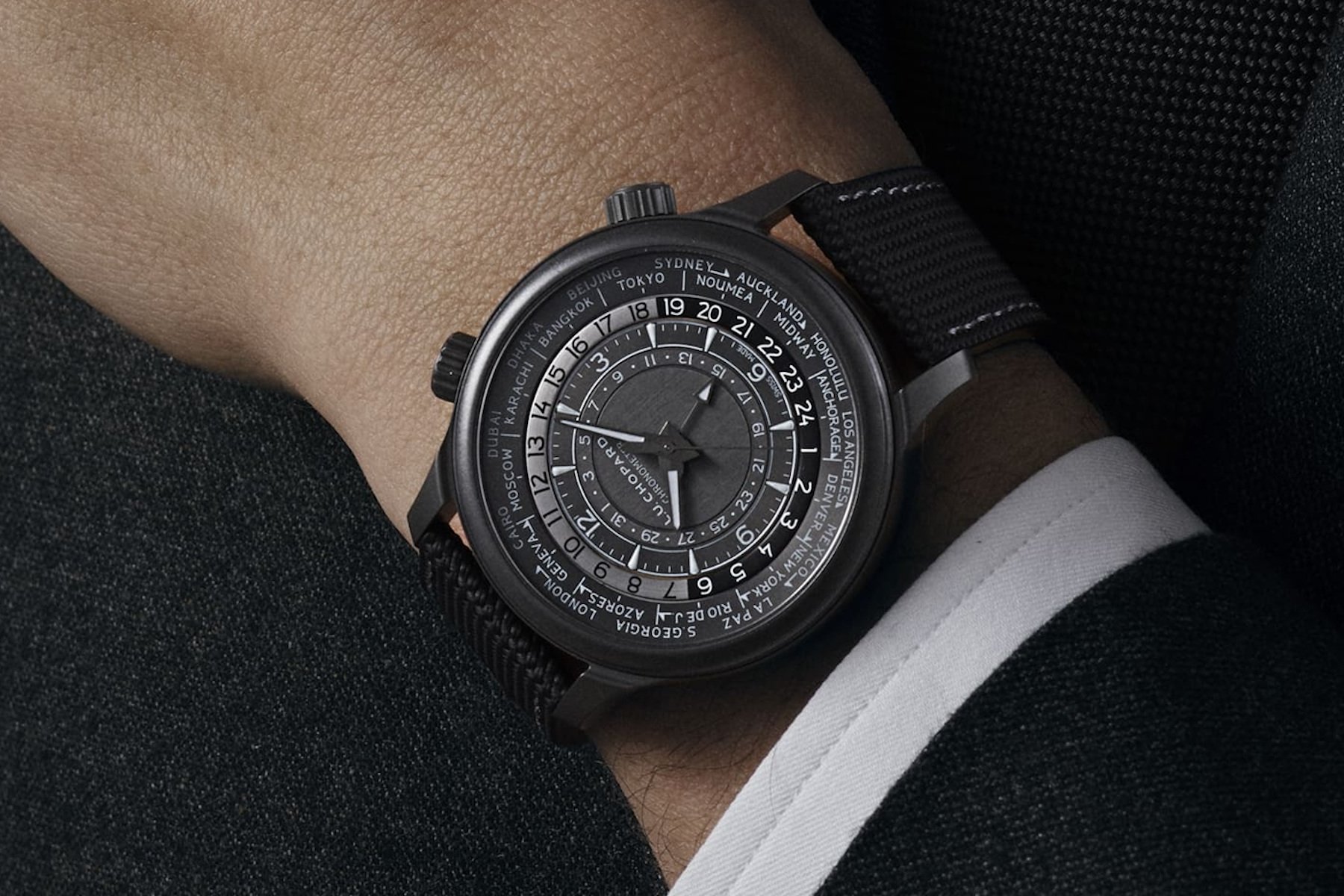 This year’s Watches & Wonder event was the first one that I was involved in, on the press side of things. It was great seeing the brands present their new watches after a year without trade shows and delayed releases due to the pandemic. After all was said and done, I wrote an article going through my favorite releases from the show. Going back over all the launches, I came across the Chopard LUC Time Traveler One. It genuinely stopped my scrolling finger in its tracks. For some reason, it didn’t seem to receive much coverage from other publications either. It was as if it had slipped stealthily under the radar. 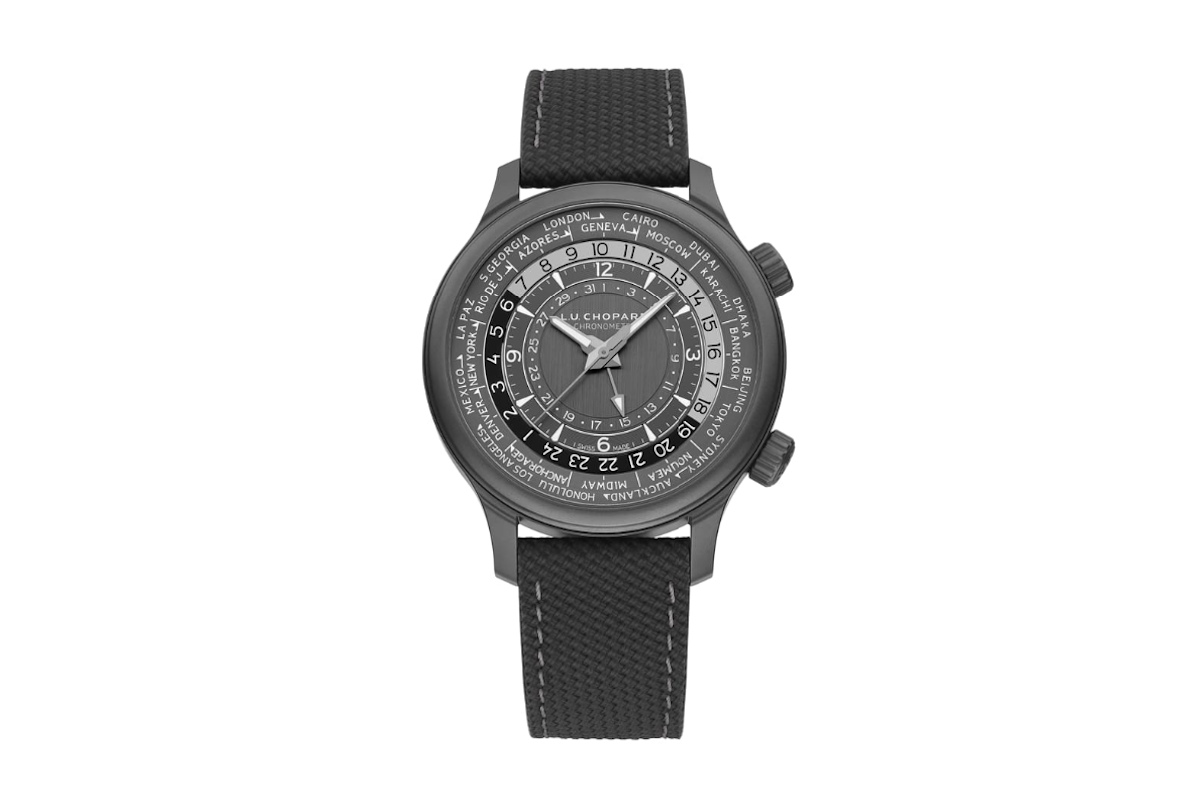 The 42mm case of the LUC Time Traveler One Black is made from solid “ceramised” grade-5 titanium. Renowned for its strength and lightness, titanium is a perfect choice of material for a sporty travel-inspired watch. The titanium is “ceramised” by oxidizing the metal’s surface at extreme temperatures using electro-plasma technology. This process results in superior hardness of up to 700 Vickers and thus additional resistance to everyday wear and corrosion.

One risk that world timer watches often run into is the “overly busy dial” curse. It’s usually a killer for many a watch. An overly busy dial can destroy legibility, defeating the point of what is fundamentally a tool watch. I simply loved the incredibly busy dial of this model, however. To some, it may appear chaotic, but I was immediately taken by the order in this chaos. There are four circular scales displayed on the dial. The mix of typography, colors, and information is oddly comforting to look at. I dig it. I dig it a lot! 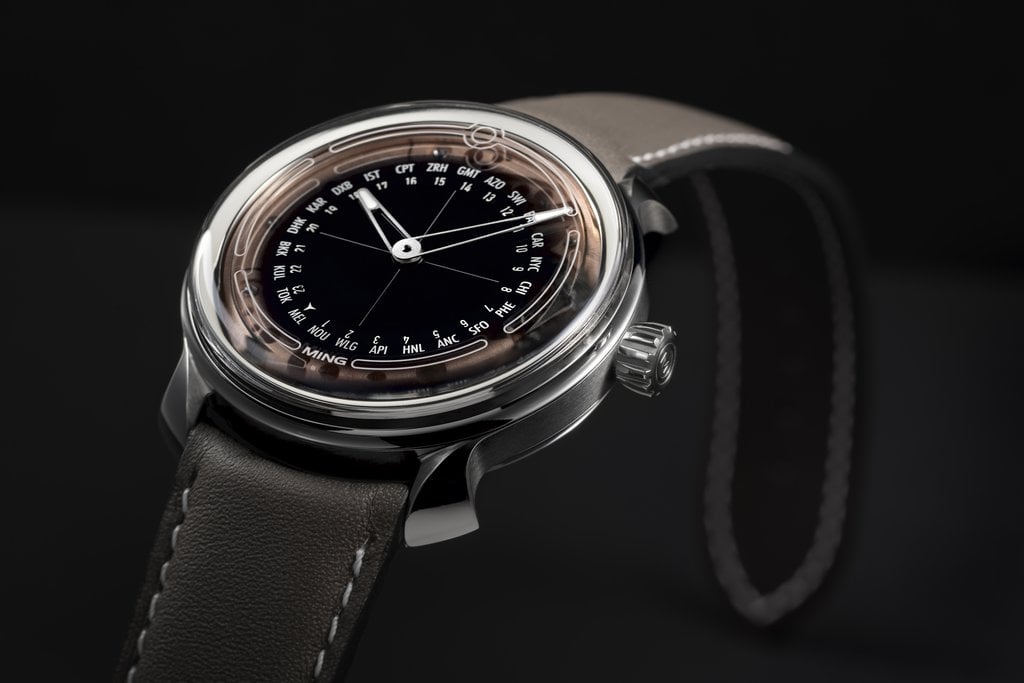 Last but not least is the MING 19.02 Worldtimer travel watch. I was hesitant to include this watch on the list, as it’s the only one of the three that is no longer in production and completely sold out. I don’t know exactly how many pieces MING made of the 19.02, but it will not have been many (ok, I checked — it was 17 pieces across all variations, according to MING’s website). As such, don’t expect to see many of these coming up for sale on the second-hand market. To date, I have seen precisely zero being offered for sale privately. That clearly says how much the lucky owners treasure these watches. I’ve never actually handled one of these pieces, so it takes its place on the list due to the visuals and paper specifications alone.

I loved this watch from the moment I first saw it. The smoky gradient sapphire dial hooked me instantly. My love for the Smokey sapphire dials has never wavered, so you can guess how happy I was to finally snag my first MING during the 17.09 launch. In case you wondered, I went with the blue version. But back to the 19.02: it’s an undeniably beautiful design. MING’s signature case silhouette gently cradles the modified Schwarz-Etienne ASE220.1, which sneakily peaks out at the outer edges of the gradient dial. 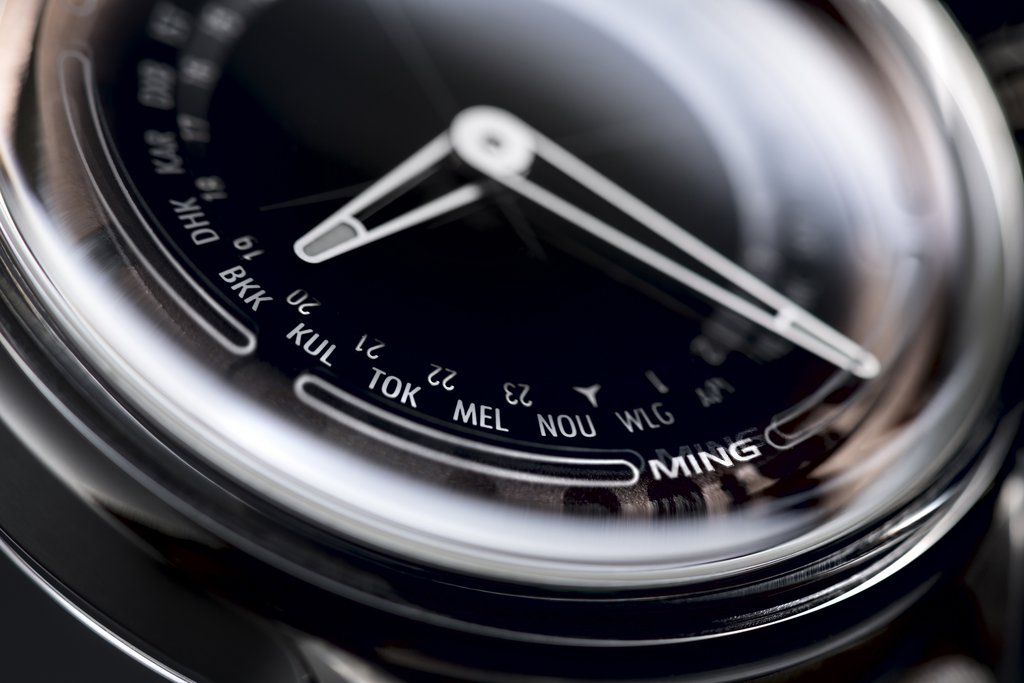 Airports rather than cities

Often, world timers display the cities (or, in the case of the 19.02, airport codes) on a rotating disc. However, MING chose to make the cities static and the 24-hour disk rotate, eschewing the norms. This is because numbers are easier to recognize at a glance than airport codes. Should MING have used full city names rather than the airport codes? Well, the airport codes are much shorter in length and allow MING to have a much cleaner dial. I don’t usually agree with form over function, but in this case, I think it was a smart decision. Consequently, the 19.02 is a clean and classy watch.

MING quickly forged a reputation for releasing very small batches of watches that punch considerably above their price point. The brand’s design style was unique, and Ming found a real niche in the industry. That said, there have been a few QC and customer service issues we’ve been hearing about from MING customers and prospective customers on social media lately. I’m not going to go into detail, but if you search, you will find. While every brand experiences QC issues from time to time (yes, even the almighty Rolex), it’s how they’re handled that makes all the difference. I am confident that the young brand will quickly fix the few hiccups it’s recently encountered.

I’m keen to hear what you think of these choices. Do you own any of the above? If so, let me know how you’ve been getting on with them. If you don’t own them, what would your top four list look like?

Hot Topics
Introducing: The New Seamaster Professional 300M 60 Years Of Bond — With A Special Animated Case Back
105 comments
Introducing: The Oris Divers Sixty-Five Fratello Limited Edition
104 comments
Are You Still After An Omega × Swatch MoonSwatch?
104 comments
It’s Time To Invest In A Dress Watch — Our Picks From Breguet, Omega, Grand Seiko, And More
74 comments
The Rolex Waitlist Conundrum — How Much Will The Price Of Your Watch Increase While You Wait?
50 comments
Popular
(From The Archives) Shut Up & Read The Truth About Cartier Watches
George Cramer
21
#TBT A Vintage Seiko Buyer’s Guide to Affordable Goodness
Michael Stockton
32
You Asked Us: Rolex Submariner vs Omega Seamaster
Robert-Jan Broer
24