The Omega Seamaster name holds a very special place in my heart. I have a particular fondness for the vintage Seamaster line from the 1960s. My dad owns a Seamaster De Ville from 1966, and it’s the watch I saw him wear while I was growing up. While that model will always be special to me, Omega produced more great watches at that time that stood out. One of them is the brilliant Omega Seamaster Chronograph ref. 105.005. It has the same 1960s Seamaster looks I know so well from my dad’s watch and combines them with the brand’s legendary caliber 321. Time to shine a light on this very special 1960s chronograph.

It’s funny how the Speedmaster has played such a dominant part in my recent adventures in the watch world. Obviously, we all love the Speedmaster dearly here at Fratello, and I was reminded of the brilliant community of Speedmaster fans during the Speedy Tuesday event at the European Space Agency (ESA) in Noordwijk. It’s hard to describe the feeling of walking amongst Speedy fans that share the passion for this unique watch. But it goes way beyond just the Speedmaster. It’s the inclusive feeling of being connected to the Omega brand overall that is the motor behind this shared passion. It’s this connection that reminded me that the Seamaster was actually my first love of all Omega watches. 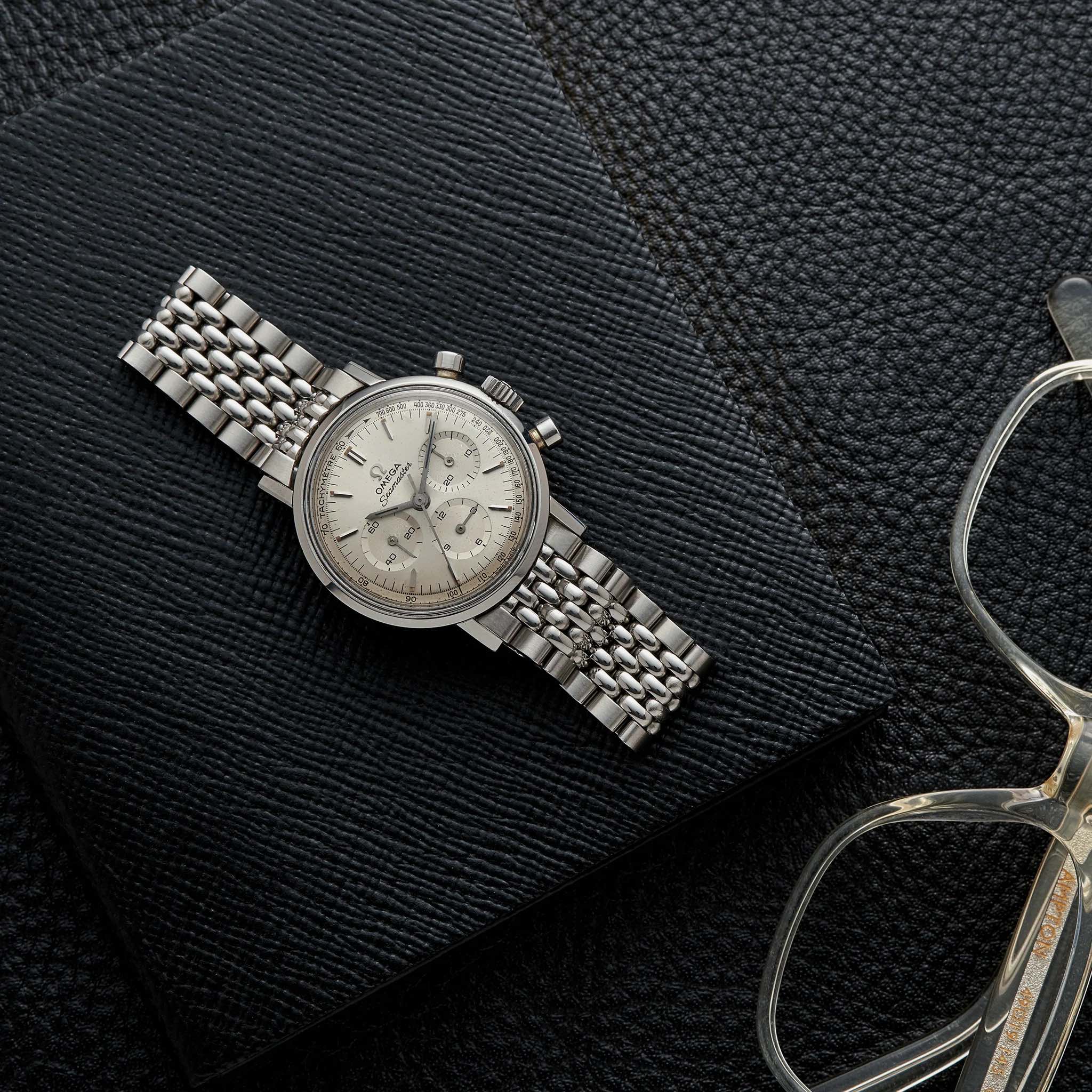 My connection to the Seamaster

It’s good to be reminded of that once in a while. I had the same little eye-opener when I had the pleasure of wearing the stunning Omega Seamaster Professional 300M Chronograph in Sedna Gold. Not only is that watch one of the most stunning pieces I have worn recently, but there was also a connection that was far more personal than with most watches. It’s a connection that goes way beyond design and execution and extends to my father’s Seamaster De Ville. 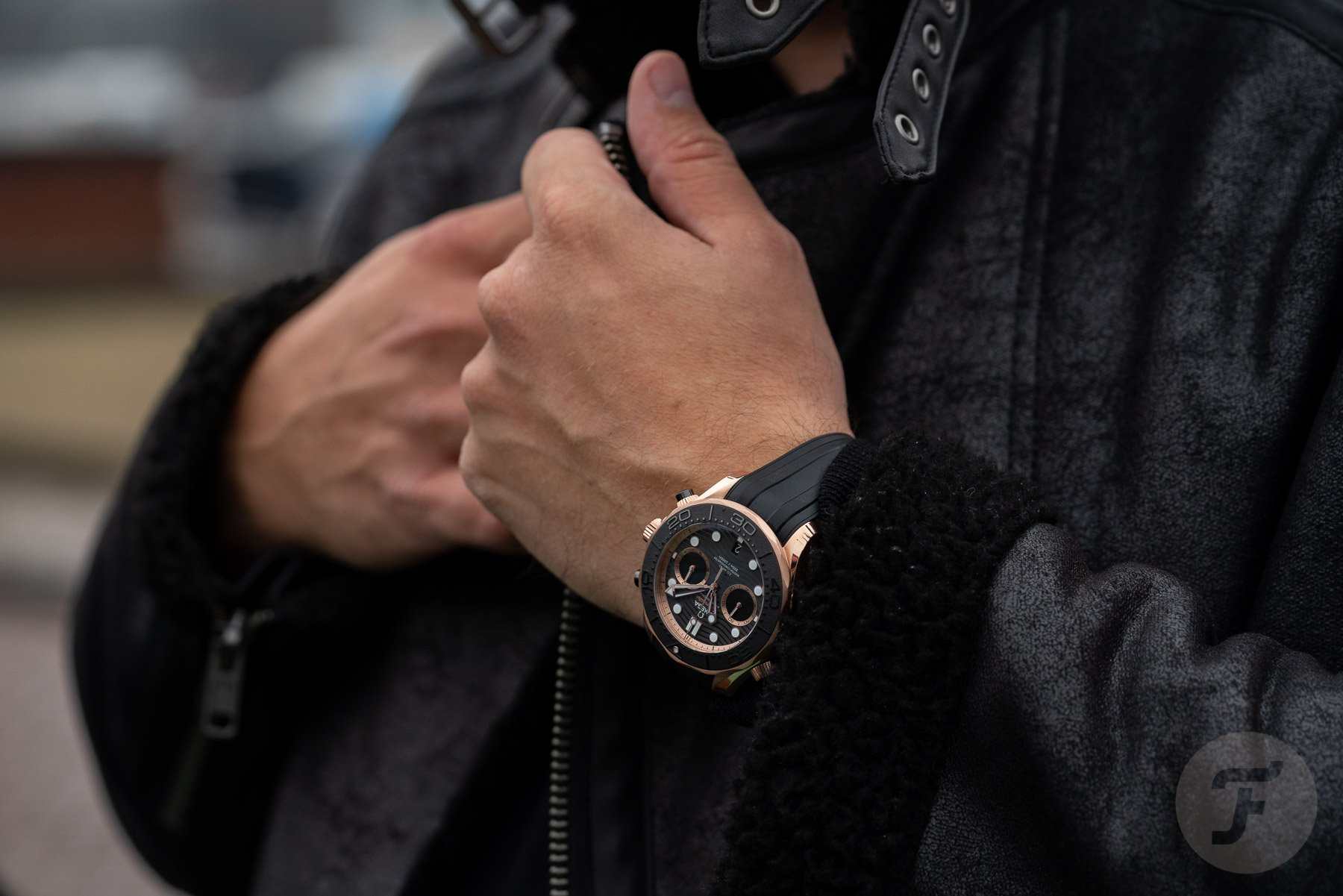 But the more accurate historical link for the Sedna Gold Seamaster Professional 300M Chronograph is actually the watch in this article. It is also a Seamaster Chronograph, but it’s not just any Seamaster Chronograph. This one connects the emotional worlds of the Seamaster and Speedmaster in one watch. On top of that, it simply looks stunning, even almost six decades later. The Omega Seamaster Chronograph 105.005 is well-known amongst Omega collectors. But for me, it has the presence and the movement that puts it on the same level as the legendary 1960’s chronographs from the likes of Breitling, Heuer, Longines, and other famous Omega releases. 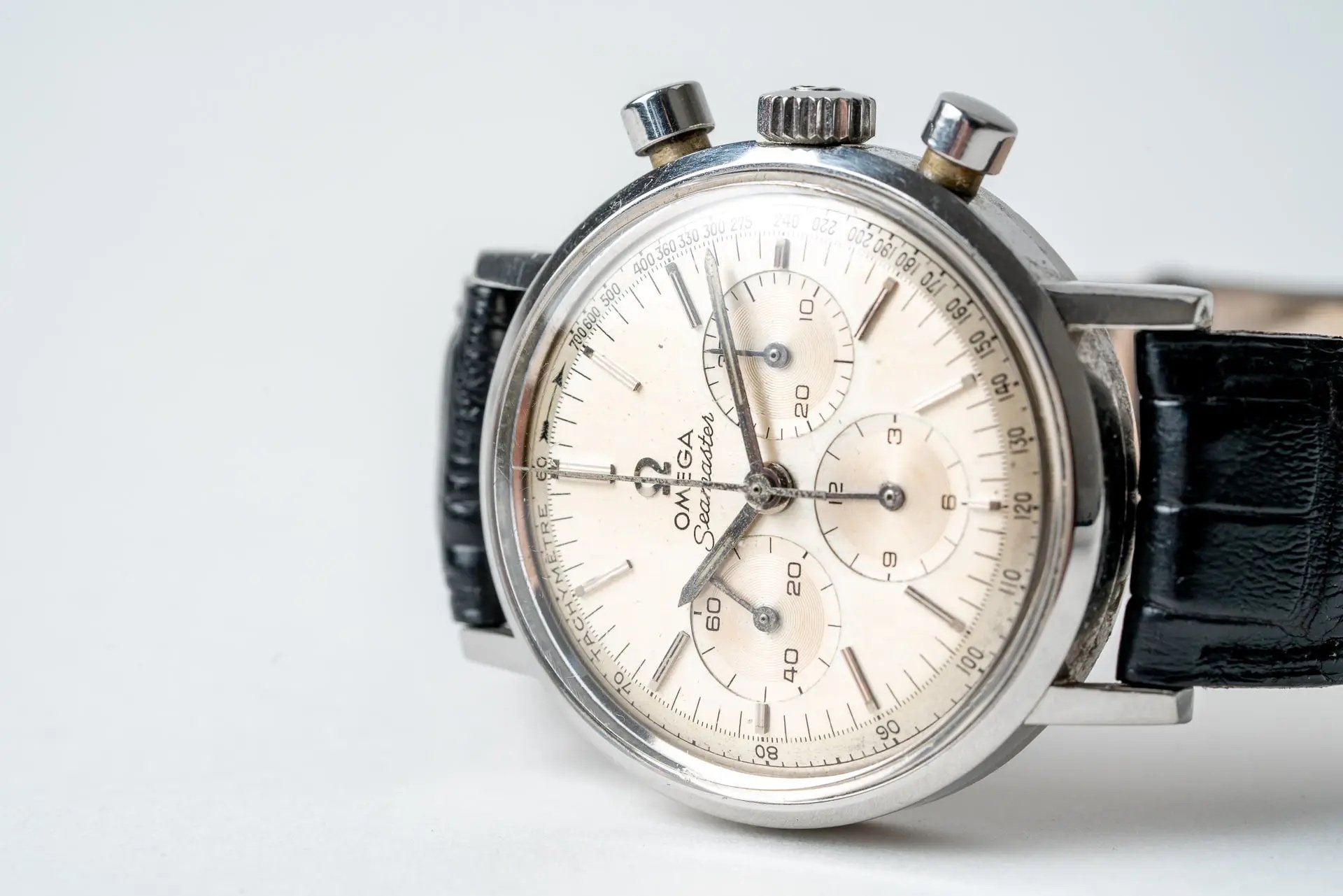 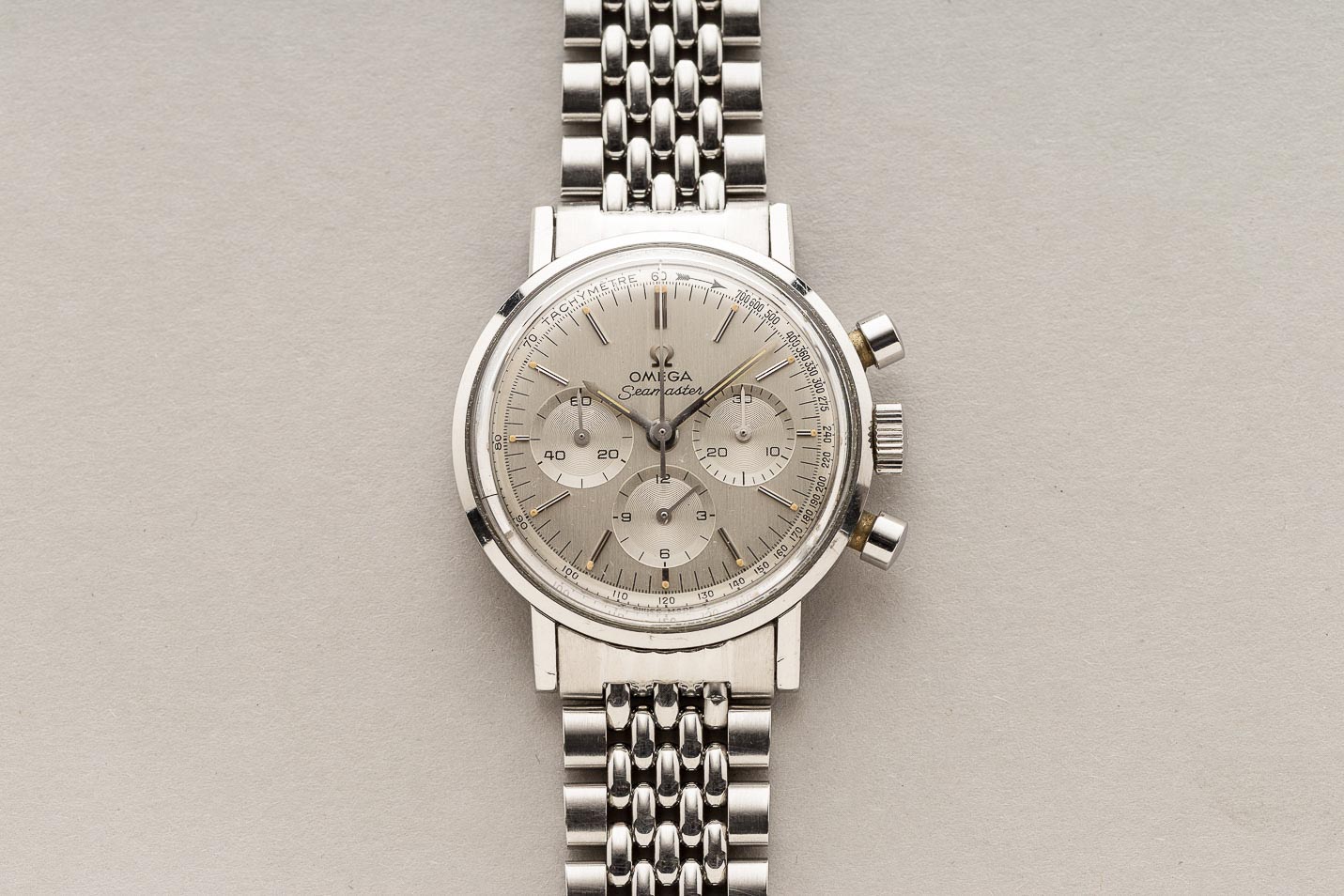 This watch is interesting because of the typical ’60s Seamaster looks and the legendary Omega caliber 321. A critical aspect in my appreciation of its looks is the style of the hands. In the early 1960s, Omega still used the very classical-looking alpha-style hands for the Seamaster chronograph models. In approximately 1963, the brand updated the hands to the more modern pencil hands for the ref. 105.001. It was a big step toward modern-day aesthetics. The same thing happened with the Rolex ref. 6238 that I wrote about in a previous installment of this series. The mid-1960s were crucial in taking the next step in the design of hands and dials. In my view, that’s when many classical looks were updated to the more contemporary aesthetics we still see used today. 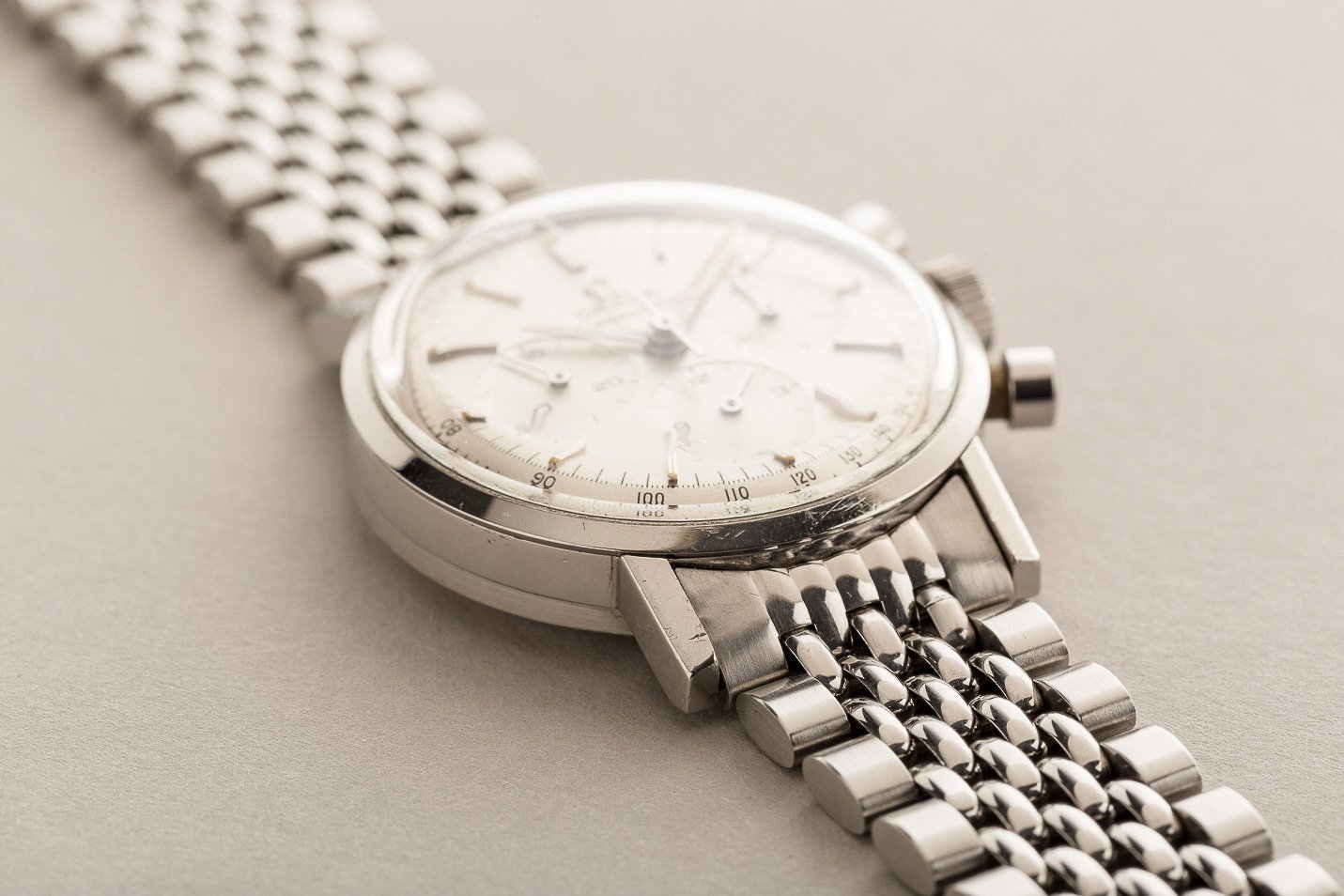 The basics of the Seamaster Chronograph

Although the hands play a huge part in my love for the Seamaster Chronograph ref. 105.005, let’s start out with some more overall specs. This mid-’60s piece features a modestly-sized 35mm case that is 12mm thick. It came in stainless steel and gold-capped versions. What I love about the case design is the round shape with the straight lugs connected to the case at a steep angle. It’s a simple but effective design that was not necessarily unique but still looks great on both the regular and the chronograph versions of the Seamaster from those days. 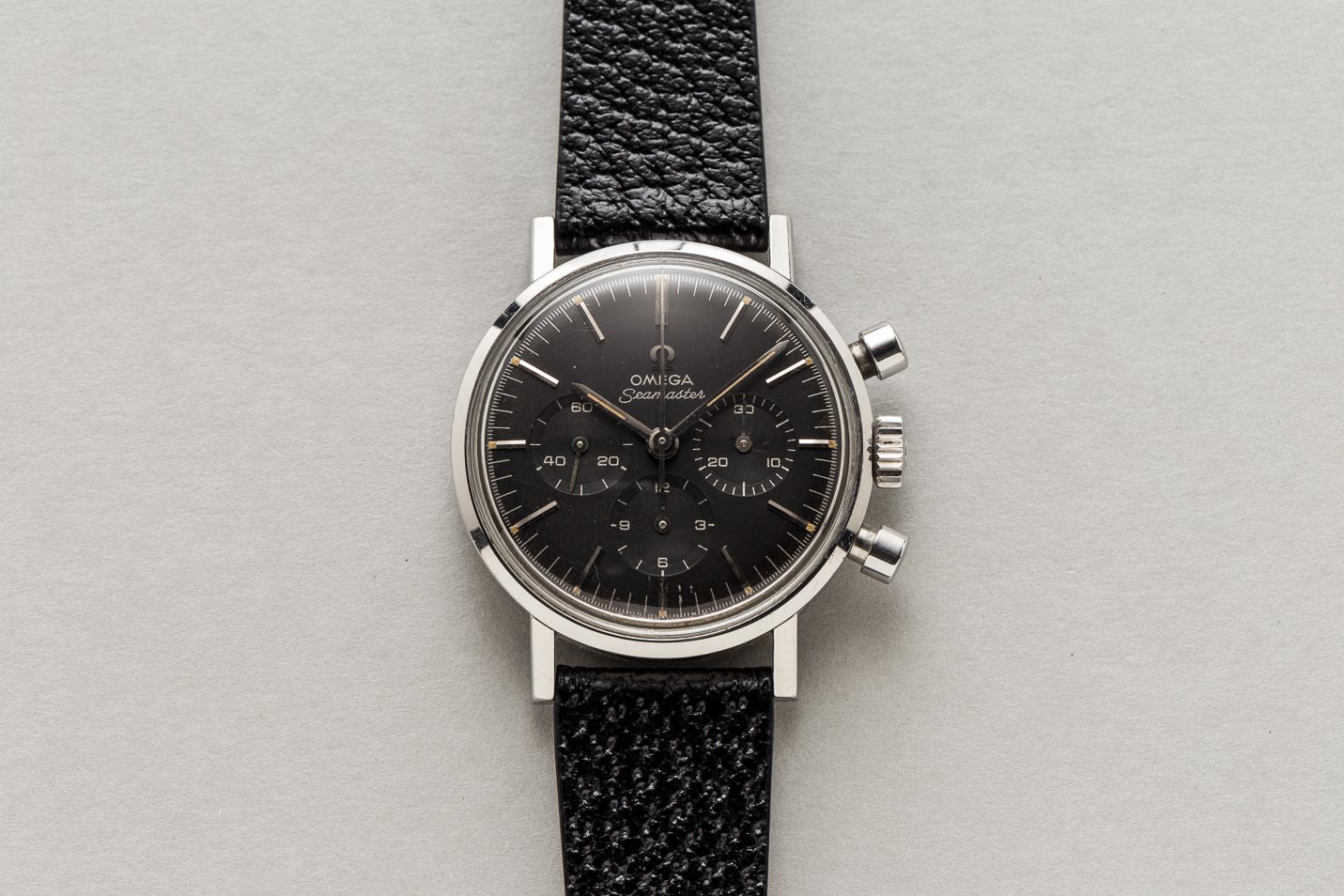 The integration of the chronograph is wonderfully done. On the right side of the case, you will find the pump-style pushers. They might look slightly oversize in comparison to the case, but to me, they are perfect. The integration of the chronograph counters into the dial is also wonderfully done. Omega produced a number of different dial variations for the ref. 105.005. First off, there are silver versions like the ones you see in the pictures. That is the most common dial color. But Omega also produced versions with a black dial that are a lot rarer. Both versions look stunning, but my preference would be the silver-dial version as it is so close to my father’s Seamaster De Ville that I love so much. 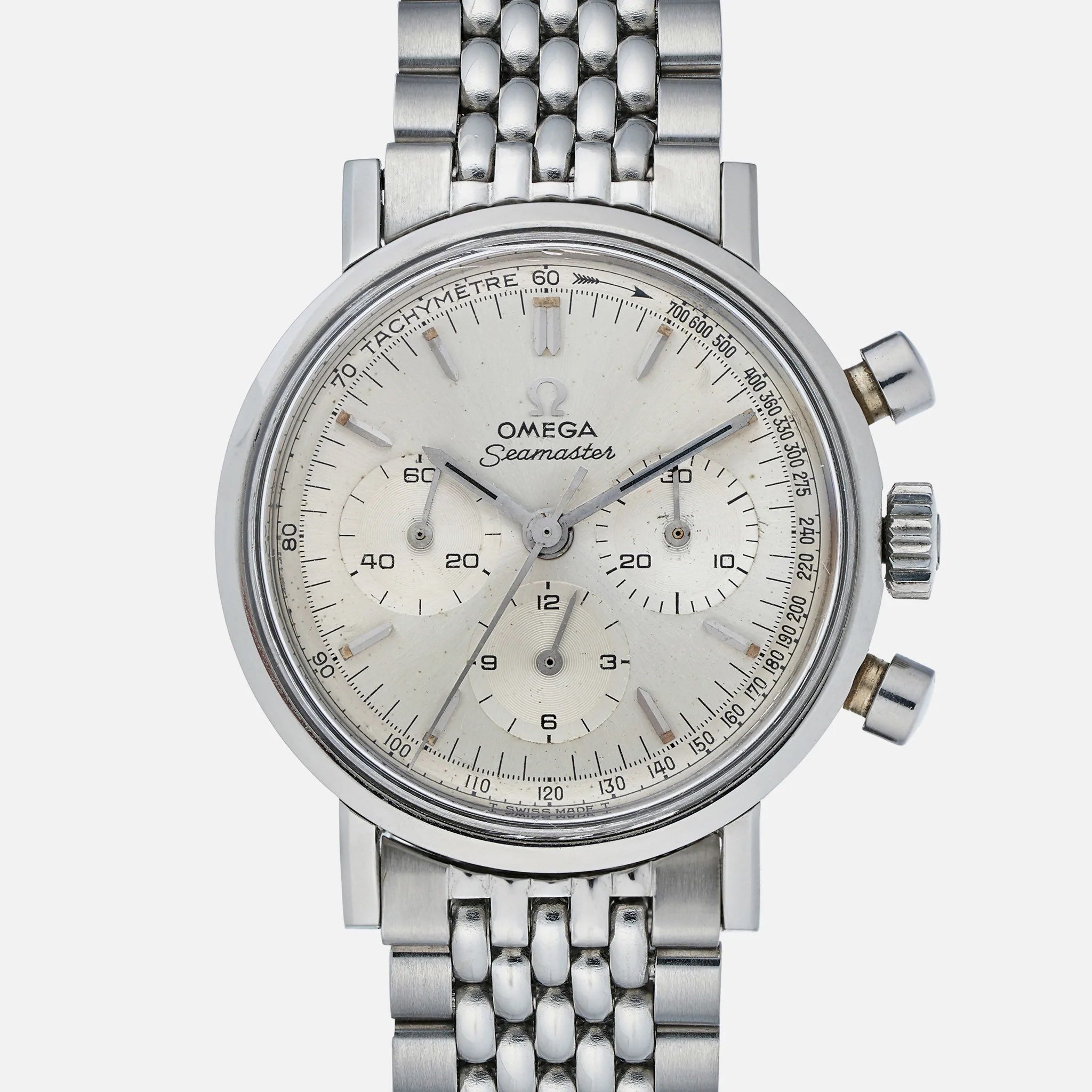 The wonderful attention to detail

Next to different colors, you will also find that there are different dial variations when it comes to the text. Some dials have the wording “Omega Seamaster” printed on there. Later models are known to have “Omega De Ville” printed on there. Omega decided to make the De Ville a separate collection in 1967. This is when the brand decided that the ref. 105.005 was to shift from the Seamaster to the De Ville collection. The follow-up reference 145.005 looked the same and was also powered by the caliber 321. It can be found with both the “Seamaster” and “De Ville” wording on the dial. On top of that, you will also find it in an 18K gold version. 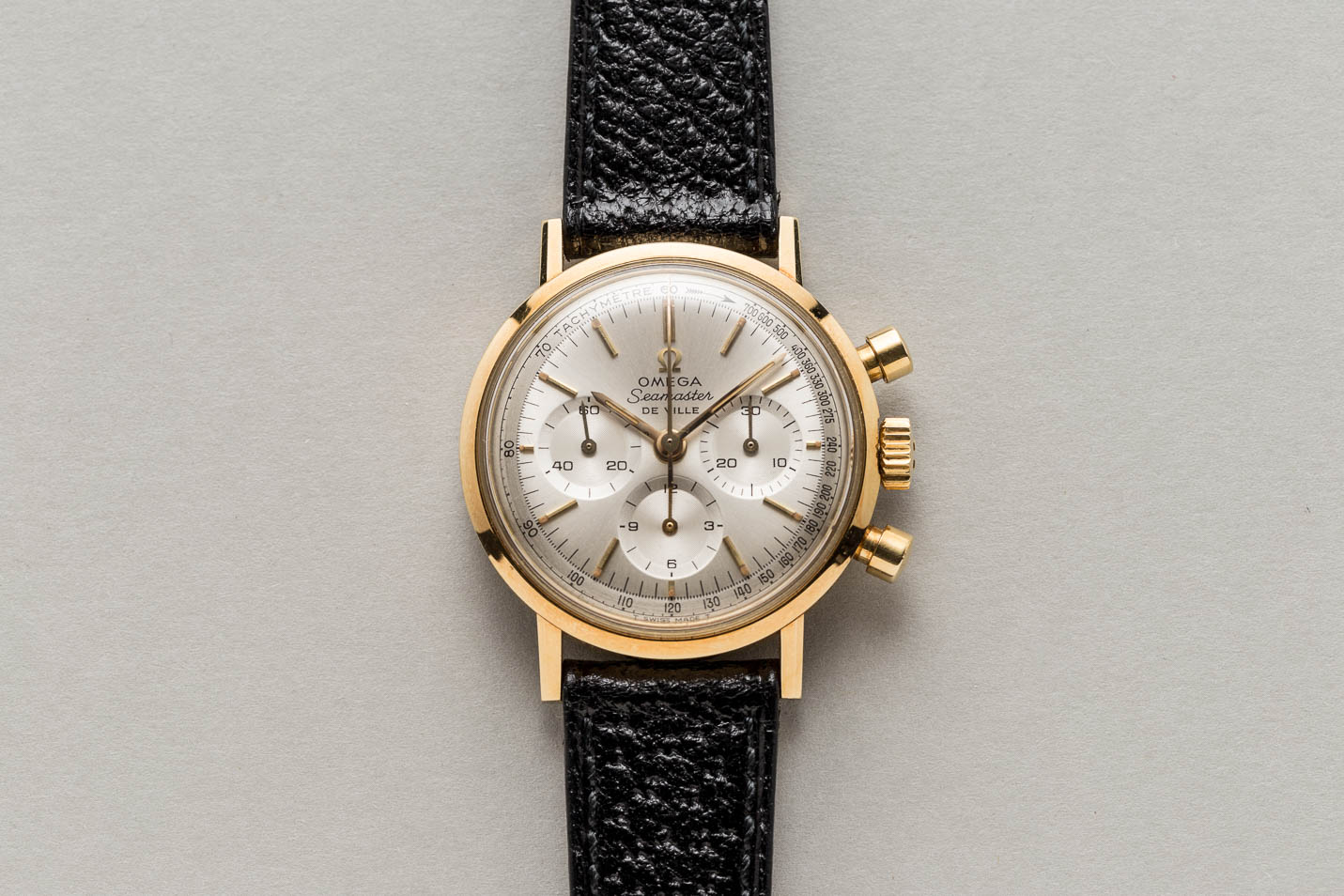 A Seamaster Chronograph ref. 145.005 – Image courtesy of Shuck The Oyster

But as many of you will know, dial changes were daily business back in those days. Like with the Omega Constellation models, many dials were swapped when the watches were brought in for service. So it is good to do your homework if you are in the market for one of these Seamaster Chronographs. If we zoom in further on the dial, we see that the counters are also wonderfully integrated. The overall balance of the dial is perfect, and on the earliest references, the only hour markers that had to be “sacrificed” were the ones at 3 and 9 o’clock. So there are no cut-off markers anywhere, something that — unless particularly well done — I am not a fan of. The follow-up ref. 145.005 (and, apparently, later examples of the 105.005) did have cut-off markers, but the designers did a good job of implementing them. They also add practicality, of course. But the simple execution of the early ref. 105.005, in my opinion, looks cleaner. 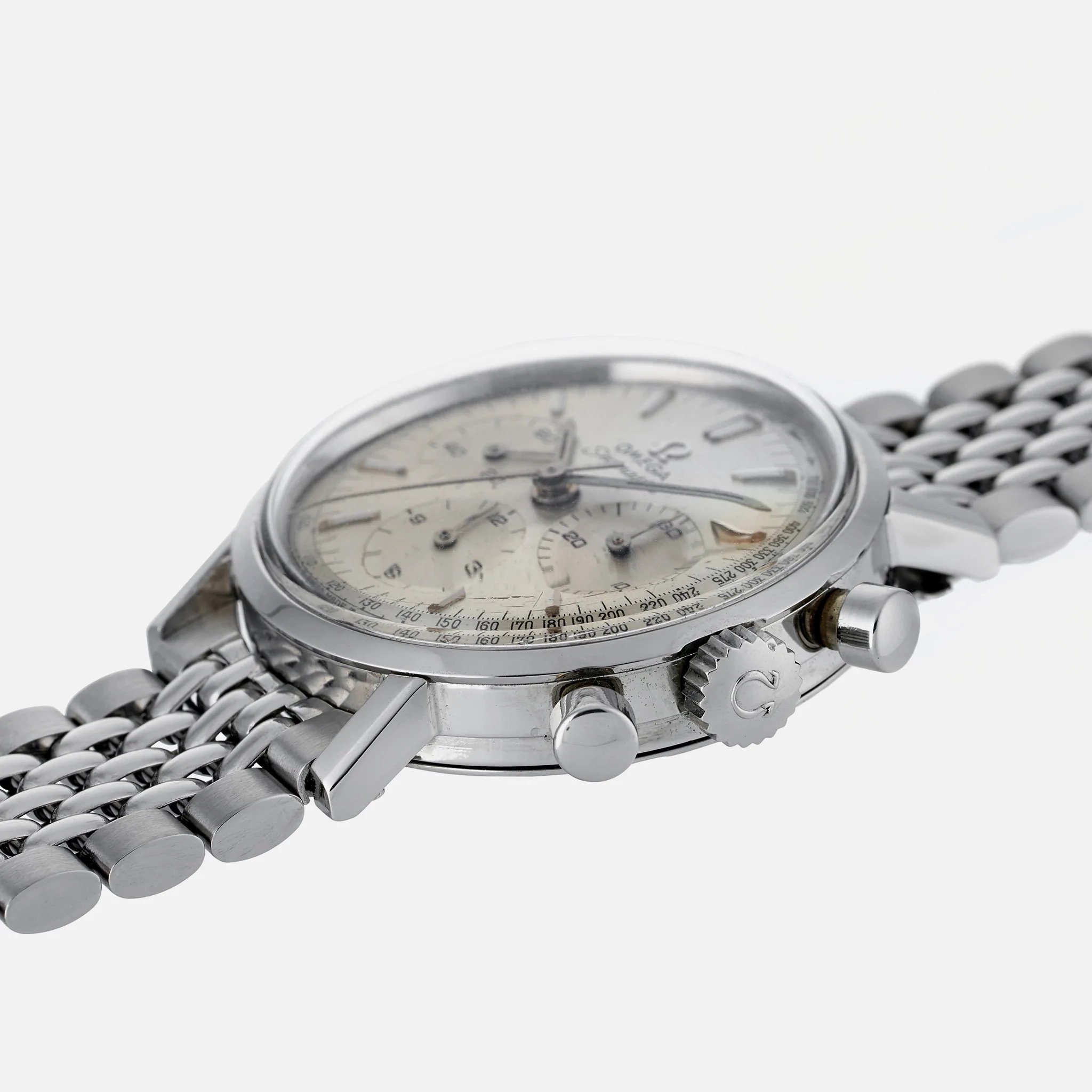 The dial design of the Seamaster Chronograph

If you let your eyes hover toward the dial’s periphery, you will find the tachymeter scale printed there. As you can see, the edges slope downward slightly. I love these details that reveal themselves if you look at the watch from an angle. Another great detail is the execution of the chronograph registers. They are slightly recessed and feature snailing for a proper contrast with the rest of the dial. I also love the applied hour markers with their little tritium lume squares at the end. Overall, the dials of the ref. 105.005 are beautiful, especially considering the excellent readability for a 35mm watch. 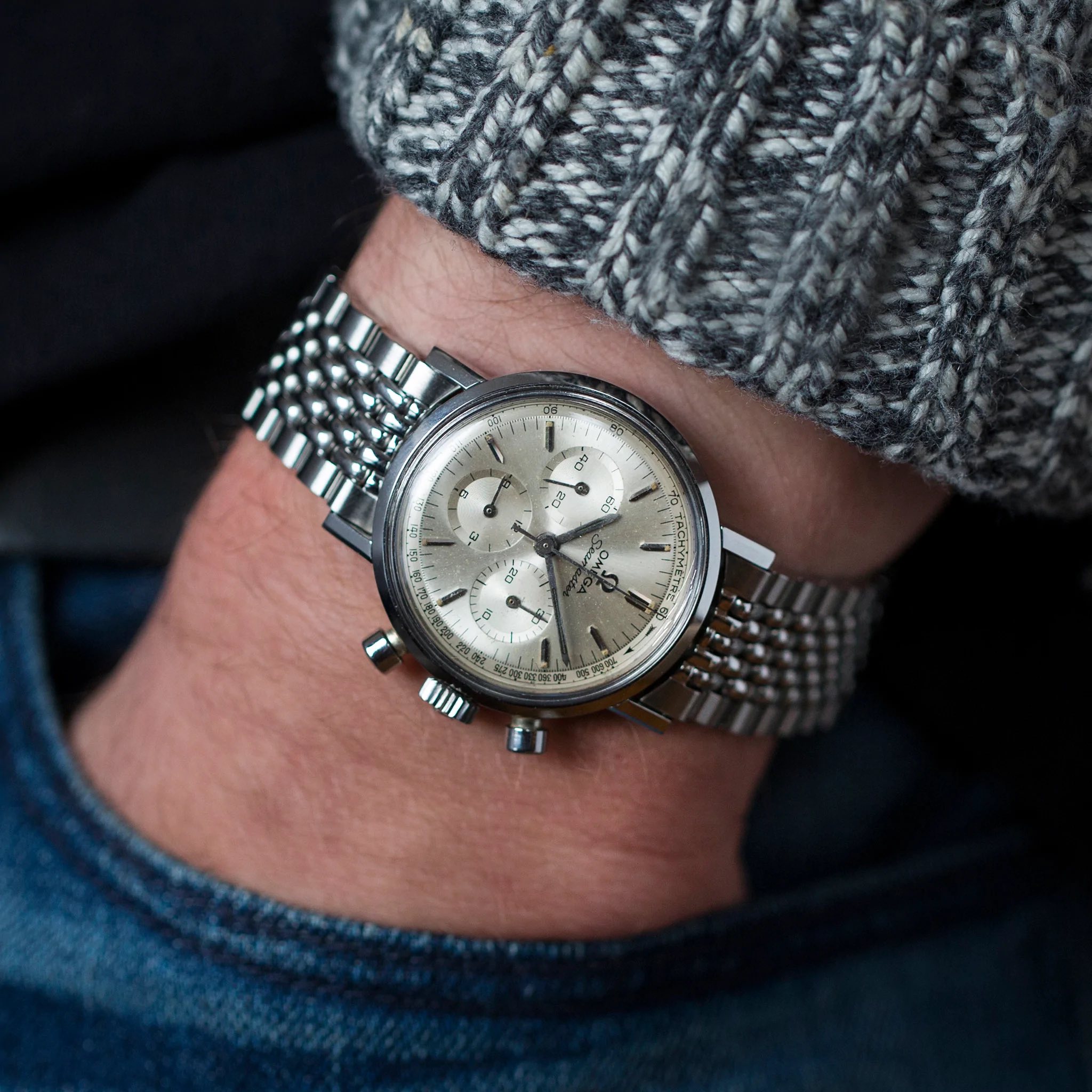 Omega offered the watch on a leather strap or a beads-of-rice bracelet. I love seeing the watch on the bracelet, and it’s why I would search for one with a bracelet in good condition. Besides the sportier looks, it also makes the watch wear slightly bigger. Owners of thea ref. 105.005 will tell you that it wears slightly larger than its 35mm size would suggest. A big factor in that is, of course, the chronogaph pushers. But visually, a bracelet also lends itself somewhat to the overall feeling of wearing a bigger watch. Nevertheless, the watch looks brilliant on both a bracelet and a strap. 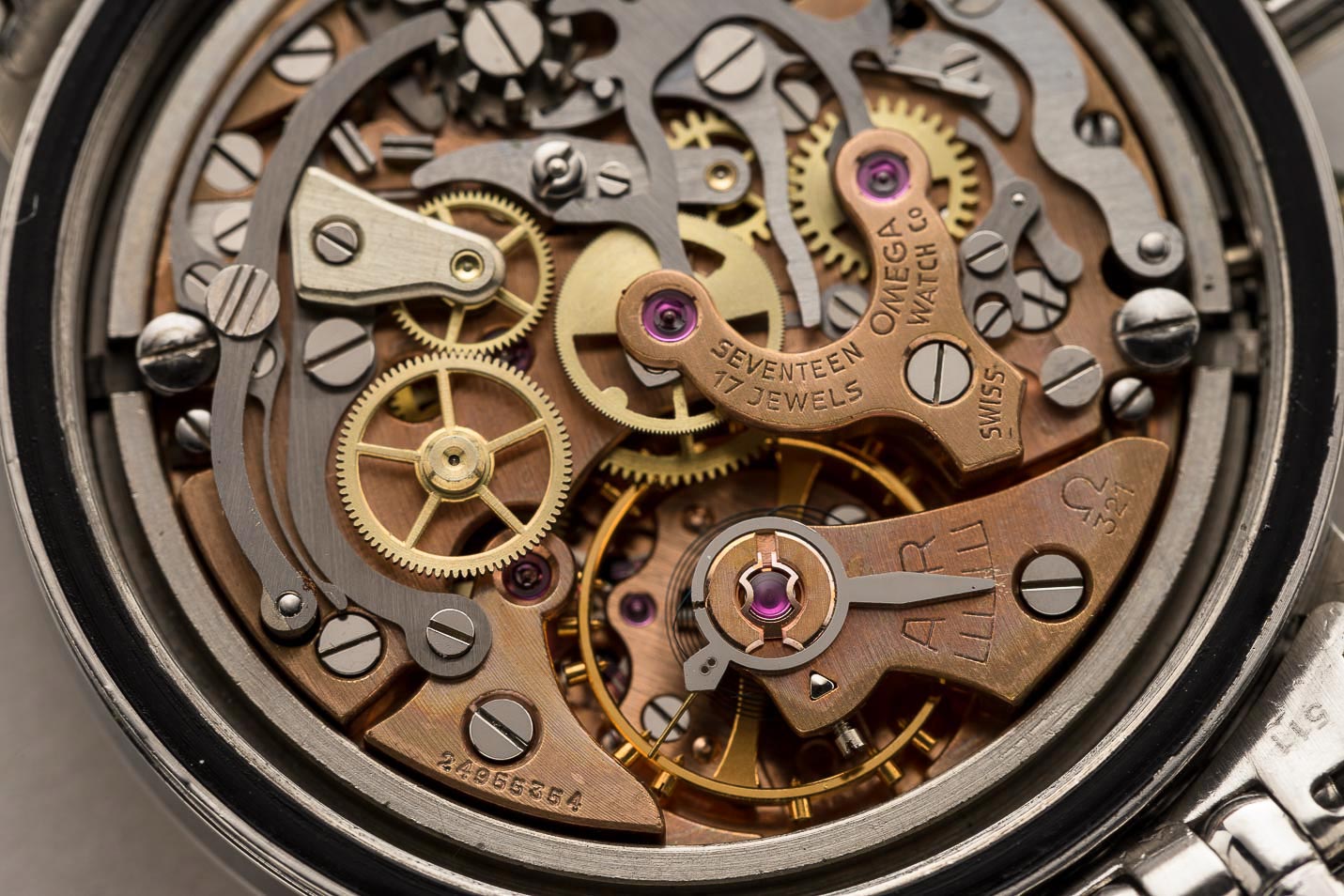 As mentioned, Omega equipped the Seamaster Chronograph ref. 105.005 with its caliber 321. Most watch people will be familiar with this legendary movement. The manual-winding caliber became famous for powering the Omega Speedmaster. It found its way to the first Speedmaster ref. CK2915 in 1957. As Robert-Jan explained, the caliber 321 was used for multiple Speedmaster references, which have become the most desirable models for many Speedy collectors. 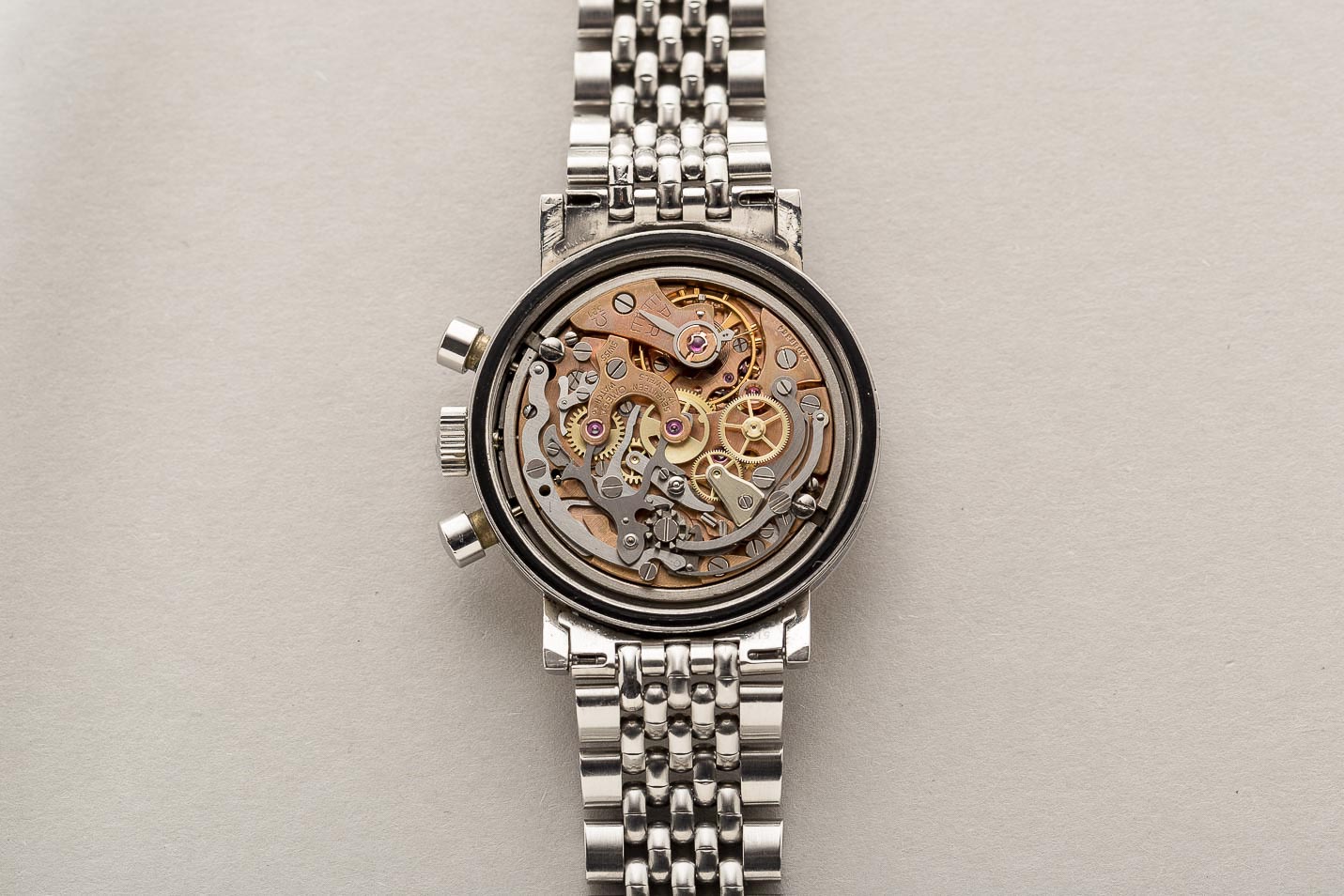 In short, the column-wheel-equipped chronograph caliber 321 had a screwed balance operating at 18,000vph. It offered a power reserve of 44 hours and had 17 jewels. Omega started using it for the Speedmaster CK2915 when that came out in 1957 and continued to use it until 1968 when caliber 861 took its place. But Omega also used the movement for a string of dressier chronographs like the Seamaster ref. 105.005. Other models include the follow-up ref 145.005 and the Seamaster ref. 145.006 and ref. 145.016. 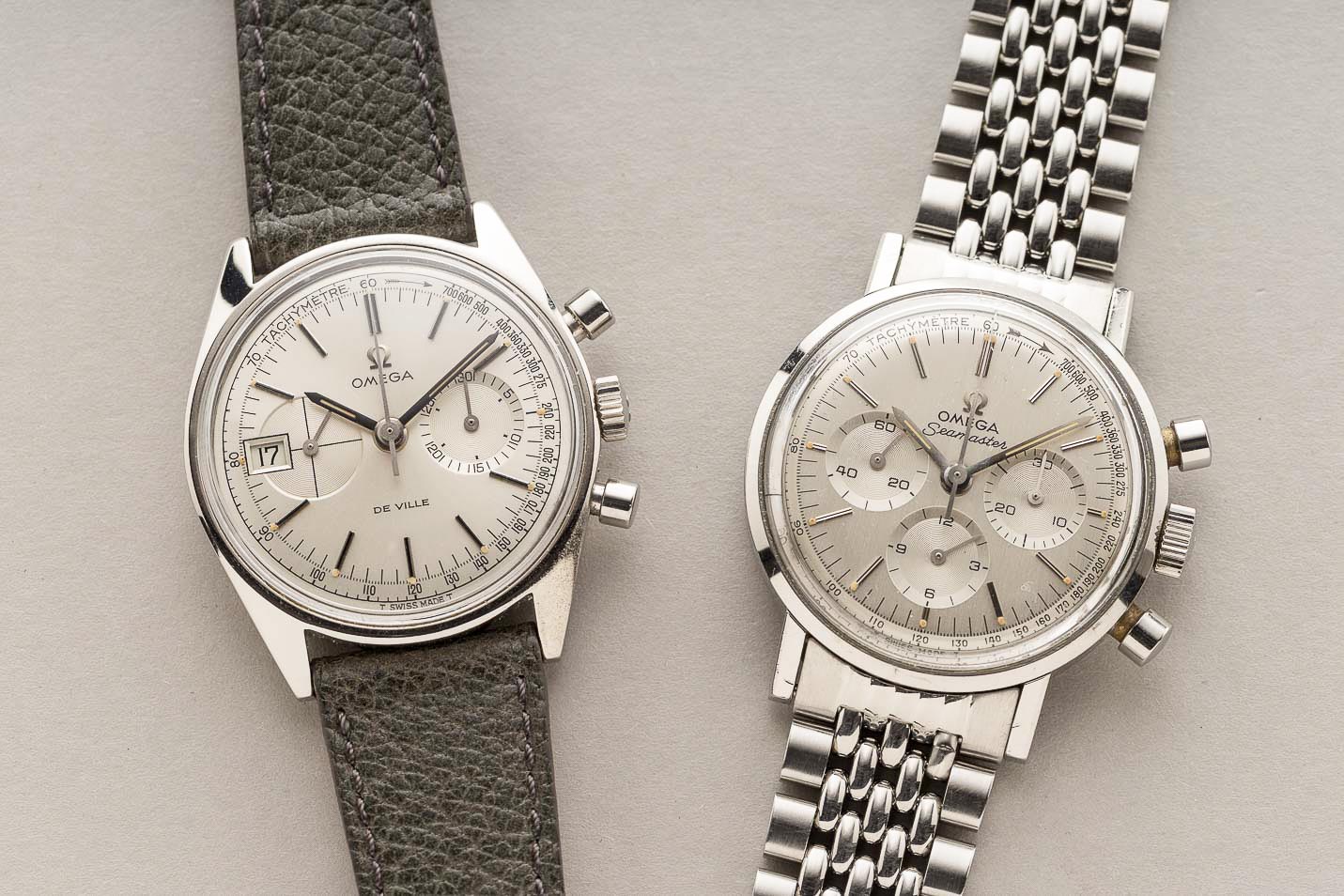 I love seeing the Omega Seamaster Chronograph ref. 105.005. It is the perfect marriage between the style of the Seamaster and the ultimate functionality of the legendary 321 movement. Unlike those of the caliber-321-powered Speedmasters, the prices for the Seamaster models with the same movement have not skyrocketed. If you search for one, you will find that they go for roughly €4K to €10K, depending on the condition of the watch. It’s still a substantial amount of money, of course, but considering what you get in return, that is still affordable.

But let’s dream a little, as this article is called “Dear Omega, Bring Back The Seamaster Chronograph ref. 105.005”. The modern version of the 321 movement is available and used in the brilliant Speedmaster Caliber 321 “Ed White”. It would be incredible to see a modern version of the ref. 105.005 or the ref.145.005, for that matter. Both watches look amazing and are the perfect examples of the combination of impeccable style and substance. And they are proof of why I deeply love the Seamaster line. This is why I believe that a modern version would be such a brilliant release. Until that happens, I will further explore the Seamaster line’s history.

Would you also like to see this watch make a comeback? If so, would you change anything about it or keep it exactly the same? Let me know in the comments!