Dear Seiko, Bring Back The Ashtray

Seiko has reissued just about everything but these...
Michael Stockton
comments 23
Share

Seiko divers rank among my favorite watches of all time. I tend to believe that Seiko has carved out a relatively unique design language for a genre that spawns multitudes of copycats. Four-o’clock crowns, signature hands, and a penchant for simplicity are some of the traits that come to mind. The Seiko Ashtray series that debuted in the mid-’80s is unmistakably a Seiko. However, it’s different than anything else in the collection, and frankly, I love it!

It’s true that less than a decade ago, I was wondering if Seiko would join the already burgeoning retro trend. Fast forward to today, and I’m hard-pressed to name a famous former model that hasn’t been recast in a modern form. On the whole, I’m a happy camper with the neverending flurry of releases that, for me, kicked off with the Turtle. On the other hand, though, I have slight reservations. The Prospex series typically features a loud and proud logo on the dial. That makes me miss the old days. Also, pricing continues to climb, but that’s par for the course these days. Therefore, with today’s request, I come knowing that my beloved Ashtray would likely receive a few unwanted additions if it were reissued. 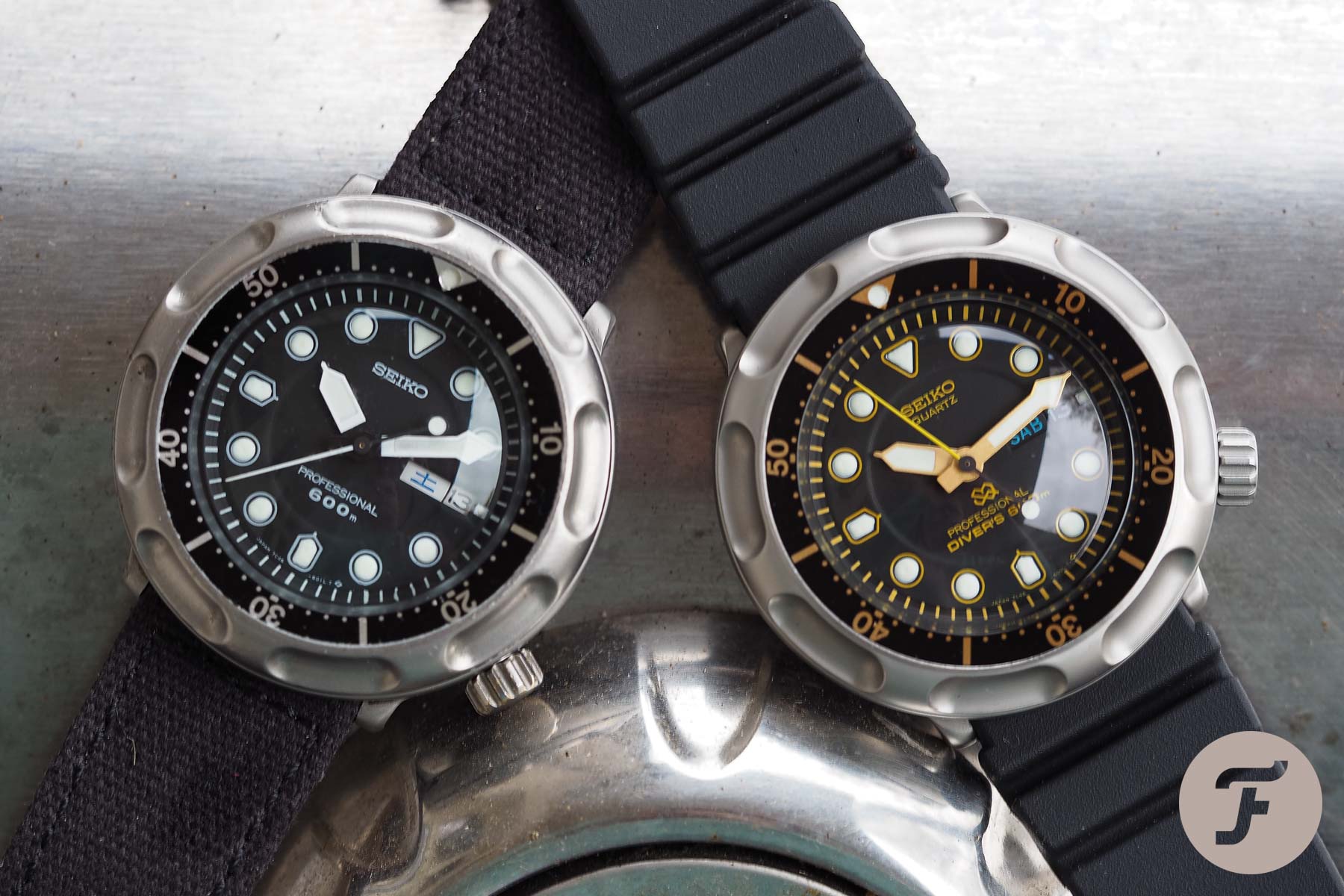 It’s hard to believe that I wrote an article on the Seiko Ashtray nearly five years ago. I say that because these beauties still look as fresh today as they did when I acquired them. To briefly recap some history, the Ashtray first debuted as the 7C46-6010 in 1986 as a steel 45 × 44mm diver with a titanium bezel and 600 meters of water resistance. A few short years later, the full-titanium -6009 version came as well. The watches are visually similar with the steel version carrying more color. As the serial numbers imply, the Ashtray was equipped with the venerable 7C46 quartz movement, and it was part of the highly vaunted Professional series. This high-torque movement has a day/date feature and is frugal enough to go five years between battery changes. In fact, the movement is so good that, 36 years later, it continues as Seiko’s workhorse on higher-end dive models. Other notes worth mentioning are the same L-shaped rubber gasket found on the Tuna series and a screw-down crown at 4 o’clock. Of course, the crystal is Hardlex and, as you can see, the shape makes photography very challenging.

As I stated in my earlier article, the “Ashtray” nickname stems from the external, rotating bezel with its telltale notches. To me, it’s one of the cleanest designs for a dive bezel that I’ve seen, and it rivals some of my favorites from any brand. Some might say that it’s bulbous or a reminder of the ’80s, but I think it looks fluid and modern. Plus, versus something technical and complicated like a Tuna, the Ashtray is incredibly unfussy. 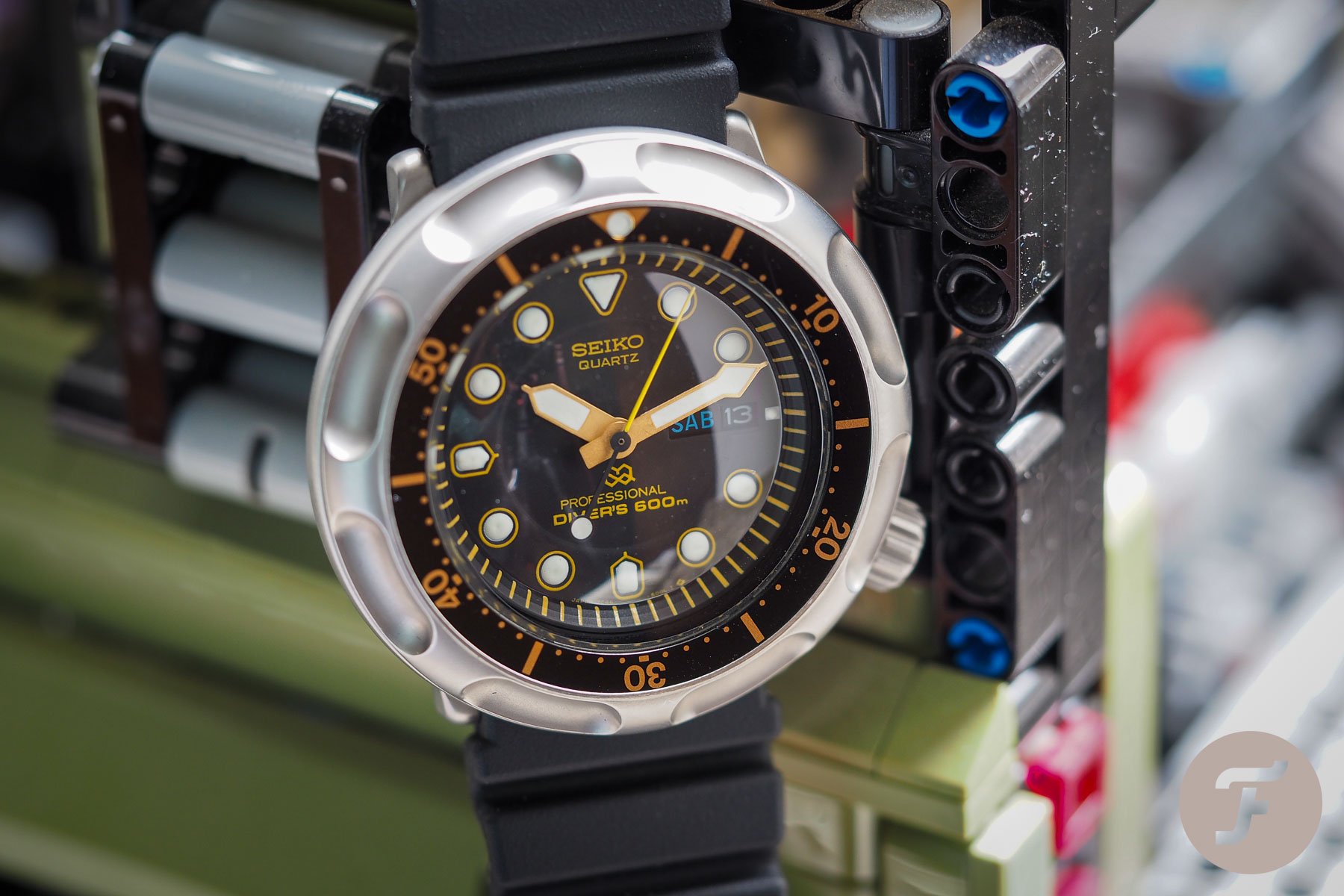 While Seiko has continued to produce watches like the Tuna in many forms, the Ashtray met a rather early demise. The watch exited the scene way back in 1993, and there has been nothing quite like it since then. Certainly, Seiko has produced scores of divers, but the brand went through a bit of a techno phase in the early ’00s and has now focused strongly on reviving its ’60s and ’70s designs. Is it time for the Ashtray to return? I’d say so. But was the Ashtray a big seller? I doubt it due to its relatively short life cycle. Still, it has managed to achieve cult-classic status. 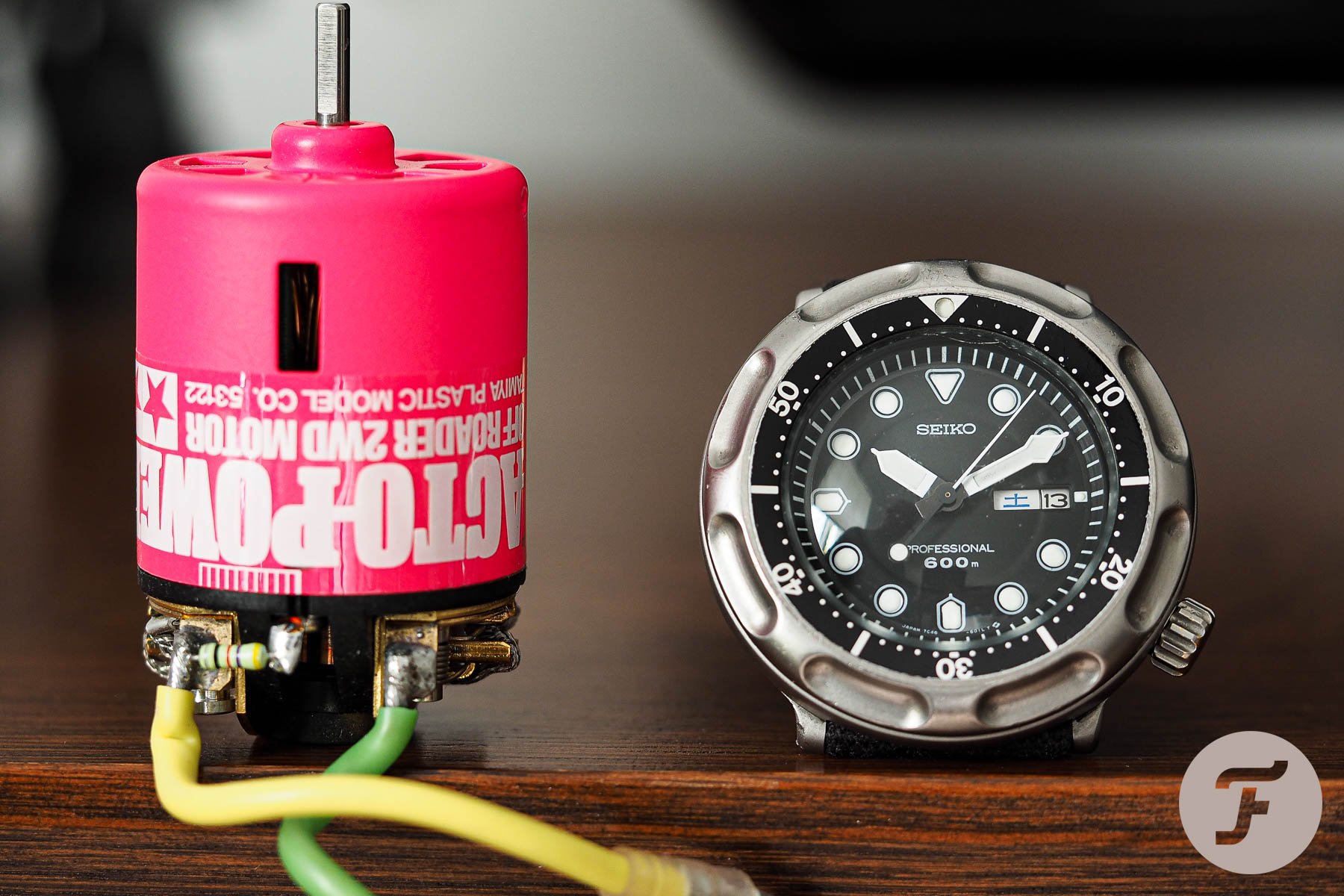 Finding an Ashtray is hard

If you’re a Seiko nut and have been bitten by the Ashtray bug (alternatively, if you’re reading this and beginning your search), you’d agree that sourcing either variant is difficult! Normally, at least one all-titanium -6009 is on eBay, but they range from €1,000 to €3,000 and vary in condition. For whatever reason, the -6010 feels rarer with few entering the market on an annual basis. Folks, this was a pricey watch (¥80,000 for the -6009) when new, and things haven’t changed on the secondary market. So, yes, rarity is a good reason for these divers to stage a comeback.

Another reason to love the Ashtray is its wearability. The short 44mm lug-to-lug makes these watches perfect for most wrists. When they were new, Seiko fitted these watches on rubber straps that look great but are incredibly stiff. Now, I’d assume that a current release would come on the comfy silicone strap. Still, I actually enjoy throwing canvas straps on these watches even though the spring bars are thinner than the original stock. No matter the accessory, it’s nice to know that a 600m-rated diver with a 15.5mm thickness can somehow feel quite small. As far as an on-brand comparison, the 300m-rated Tuna wears similarly. 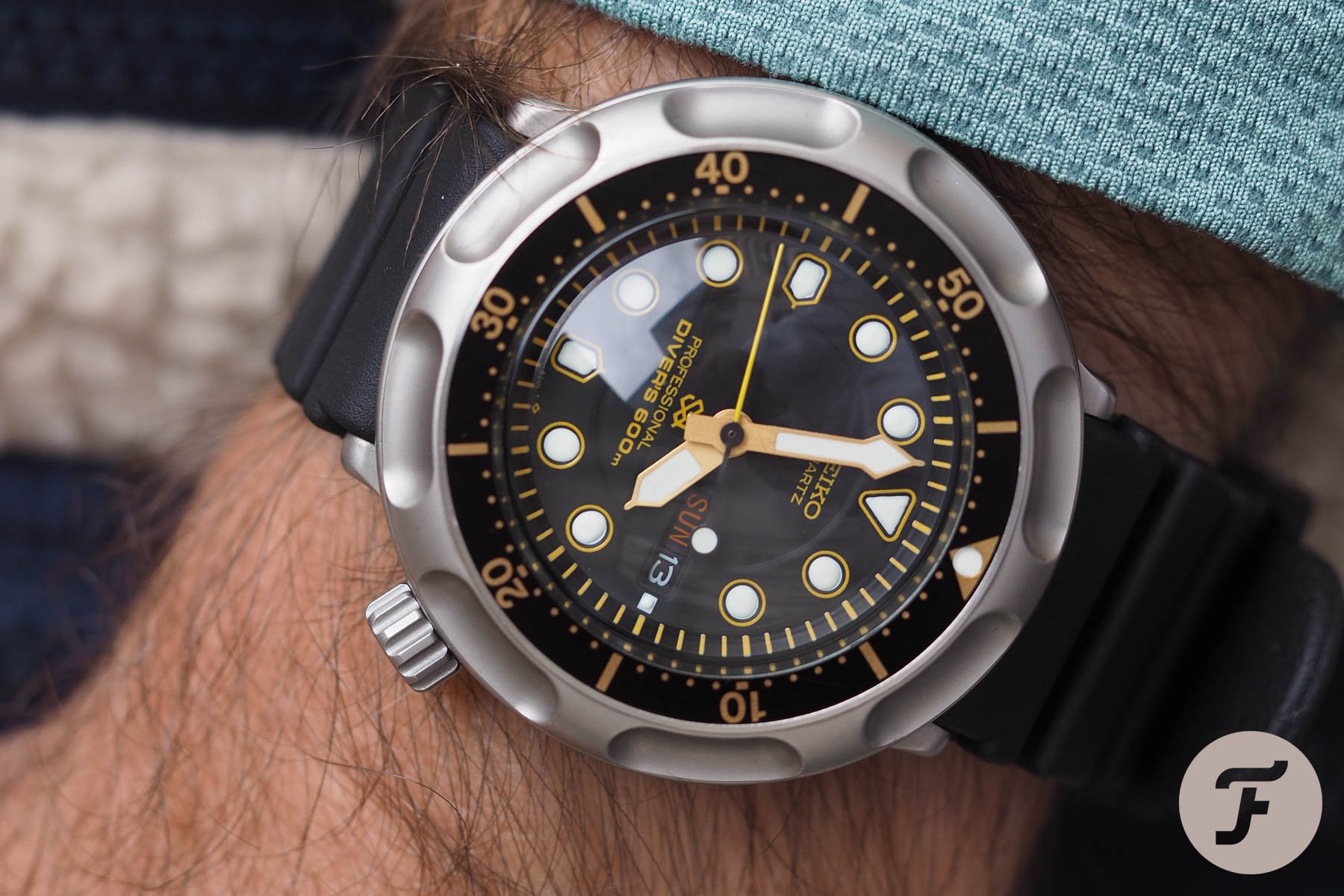 What would Seiko need to do?

In order to bring back the Ashtray, Seiko would need to recreate most of the cosmetic pieces. Perhaps elements like the crown tube and case back could be cribbed from existing models. Still, Seiko releases new models all the time, so none of this feels like a major hurdle. As mentioned, the 7C46 is still widely used, so the same movement could make its way back to the design. Pricing would be a conundrum, though. Today, the 300m-rated “Tuna” reference S23629 retails for €1,500 and uses the 7C46. On the top end, the 1000m-rated “Darth Tuna” reference S23631 sells for €2,500 and uses the same movement. Therefore, if we take a 600m depth rating for a new Ashtray, one has to assume a price range of €2,000. Like most Seiko divers, I’d still consider this a lot of watch for the money, but it certainly wouldn’t be entry-level!

If a new Ashtray received the green light, would Seiko create all sorts of limited edition models and introduce new colors such as blue or green? Seiko is a manufacturing behemoth, and therefore, scale counts. I’d assume we’d see a number of variants, but perhaps that’s the price to pay in order to witness a favorite return to the fray. Just refrain from making a Brian May edition… Please. 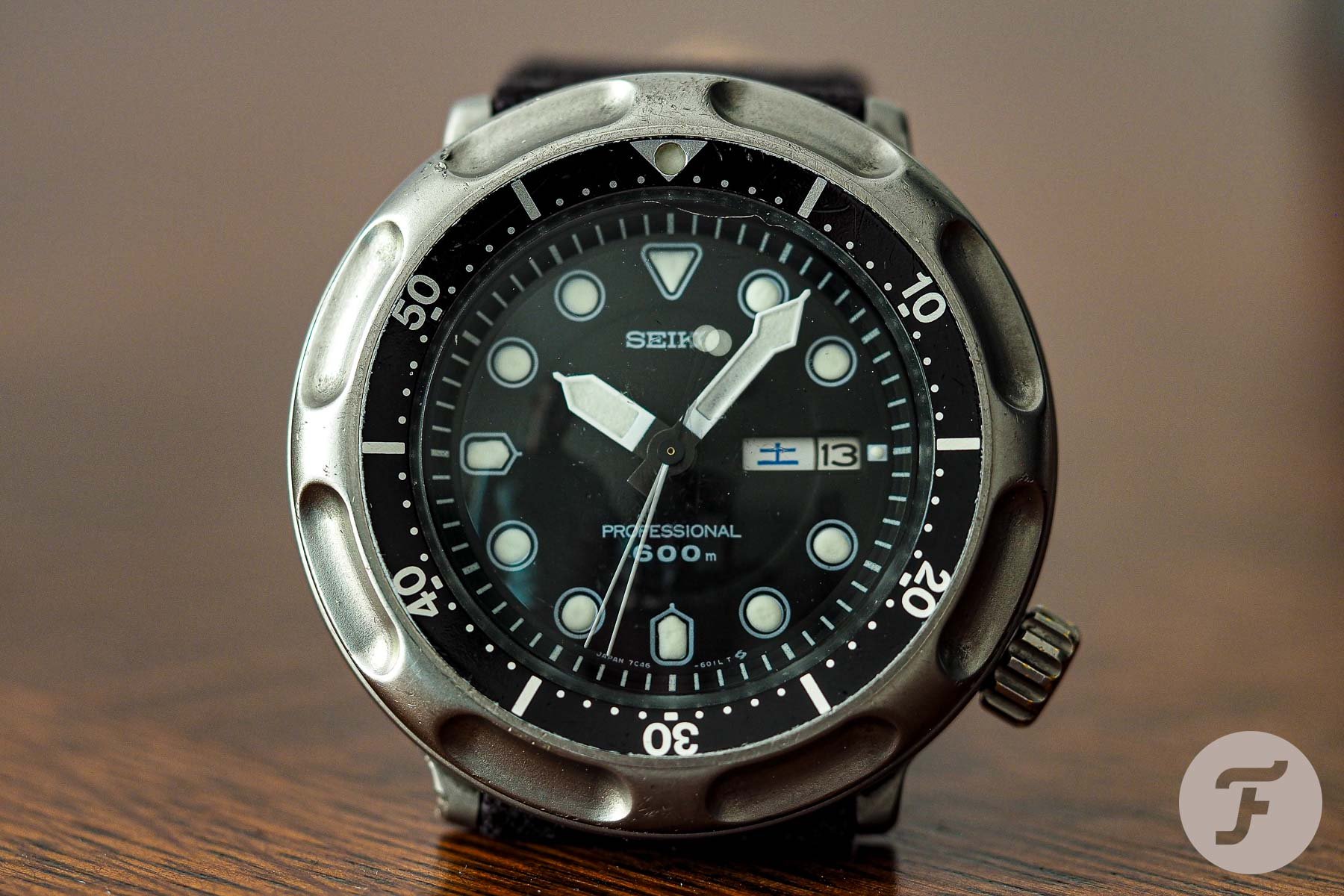 I started this article by stating that Seiko has reissued just about everything from its diver back catalog. It’s odd that the Ashtray has escaped notice thus far, but I’ve been watching and waiting. It’s one of my favorite designs from one of my favorite brands. I also think that it stands up well against other, far more expensive, titanium competitors from this era such as the Porsche Design Ocean 2000 and IWC Aquatimer GST. Will we see new Ashtray models? A few short years ago, I would have bet against it. Now, though, I’d say that the tables have turned in a good way. Here’s to hoping that 2023 will bring us a “smoking” hot release!