UNESCO Recognizes Watchmaking As An Intangible Cultural Heritage Of Humanity

Dear watch lover, you were right all along
Lex Stolk
comments 8
Share

It took place not long ago, but here at Fratello we still think it’s worth having a look back at the significance of UNESCO recognizing watchmaking as an Intangible Cultural Heritage Of Humanity. Before we begin, we can all let out a collective sigh of relief. Because yes, dear watch lover, you were right all along: watches and watchmaking have meaning and relevance. Watchmaking has shaped the architecture, urban landscape, and everyday social reality in the countless French and Swiss Jura towns watchmakers are active. Watchmaking continues to do so today, in keeping with its rich tradition. And it’s all thanks to those determined watchmakers who act as the “Guardians of Watchmaking”.

A joint effort from Switzerland and France put watchmaking on the UNESCO Representative List of the Intangible Cultural Heritages of Humanity. Great, but just what does it mean? It means that the watch-crazy collector is more than a misunderstood freak that dwells on the past and lives in a dream world…

It also means that the specific nature of watchmaking and the related activities that are characteristic of the Arc Jurassien — a region that spans from Geneva to Schaffhausen and from Biel/Bienne to Besançon — now has official recognition from an international cultural organization. With that recognition comes the acknowledgment that the preservation and transmission of watchmaking skills are very important to keep the industry moving forward and relevant.

Dear watch lover, you were right all along

Being on a UNESCO list might lead you to believe that watchmaking is now on some sort of endangered species list. A quick look at the numbers surrounding the Swiss watch industry reveals that this could not be further from the truth. In 2019, according to the Federation of the Swiss Watch Industry (FHS), Switzerland exported mechanical watches for a total worth of 21.6 billion Swiss francs, a figure that grew slightly from that of 2018 and that of the year before. It’s also a figure that shows that watchmaking is a very valuable industry indeed.

Traditional handcrafts have always been crucial and essential to the making of watches and timepieces.

But despite that value, the watchmaking traditions that underpin that industry and go back centuries, are increasingly forgotten. Traditional handcrafts have always been crucial and essential to the making of watches and timepieces. But the production process nowadays is a largely industrial one in order to increase the production volume. Now that UNESCO regards watchmaking as an Intangible Cultural Heritage of Humanity, we can look at the preservation of traditional methods as a crucial element of the future of the industry.

Punctuality is a virtue

Since the sixteenth century, watchmaking and the variety of highly specialized part makers and all kinds of other contributing craftspeople had a direct impact on social, economic, and cultural life in the Arc Jurassien. The presence of watchmakers shaped mindsets in the region too. Punctuality, for instance, is a virtue that directly relates to watchmaking. So too are perseverance and inventiveness. UNESCO recognizes the different practices, expressions, knowledge, and skills relevant to watchmaking as part of a cultural heritage. It sees watchmaking as a tradition that promotes cultural diversity and human creativity.

But even before watchmaking was put on the UNESCO list, several watchmakers were already concerned about the loss of traditional artisanal skills. That’s why in 2005 Robert Greubel and Stephen Forsey joined forces with master watchmaker Philippe Dufour to found the Time Æon Foundation. A year later, this foundation started a training program for fully handmade timepieces, called “Le Garde Temps — Naissance D’Une Montre”. Throughout the “Birth of a Watch” training course, nascent horologists are put through their paces by the so-called “Guardians of Watchmaking”.

In 2015, his studies resulted in the presentation of the first of 11 handmade watches …

That apprentice watchmaker in question was found in Paris. Michel Boulanger, a teacher at the local watchmaking academy, was chosen as the one who would be taught in the 19th century traditional way. In 2015, his studies resulted in the presentation of the first of 11 handmade watches — the Naissance d’une Montre School Watch. With the birth of the traditional watch, Boulanger was promoted from student to teacher once again. 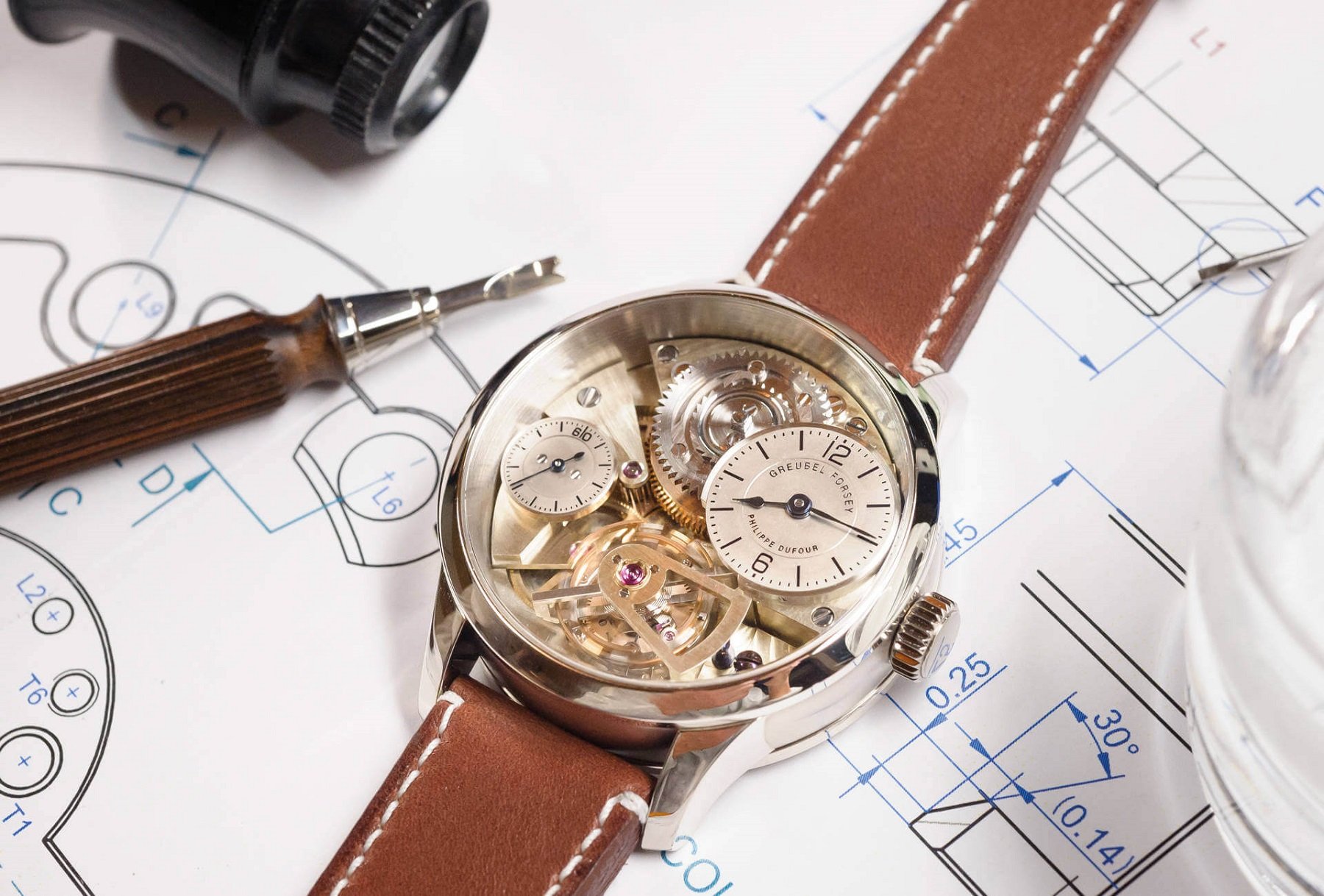 The Time Æon Foundation now consists of seven members, with the most recent addition being Dominique Renaud, known as the co-founder of complication-specialist Renaud & Papi. The foundation’s current projects include watchmaking workshops led by Michel Boulanger, among others. The foundation does not sit still, as evidenced by the presentation of the complicated and experimental Naissance d’une Montre 2, where the people behind MB&F and Urwerk acted as teachers. 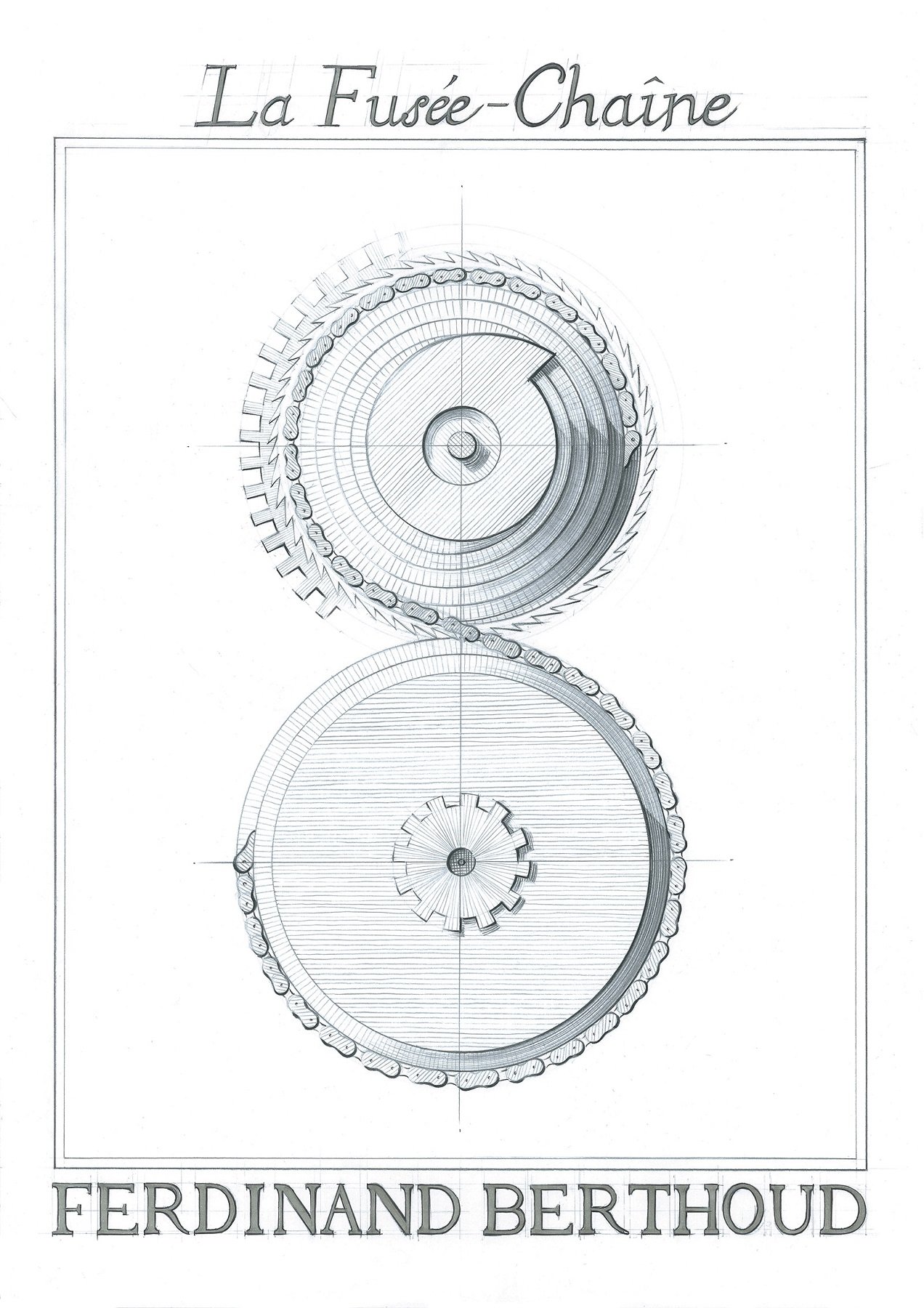 And last year, the third Naissance d’une Montre was announced, a watch that should be ready in 2024. The watch is made in collaboration with Ferdinand Berthoud, and is far from being your average watch. It uses the fusée and chain mechanism from the Ferdinand Berthoud FB 1, but now, made entirely by hand. Just like the rest of the watch. 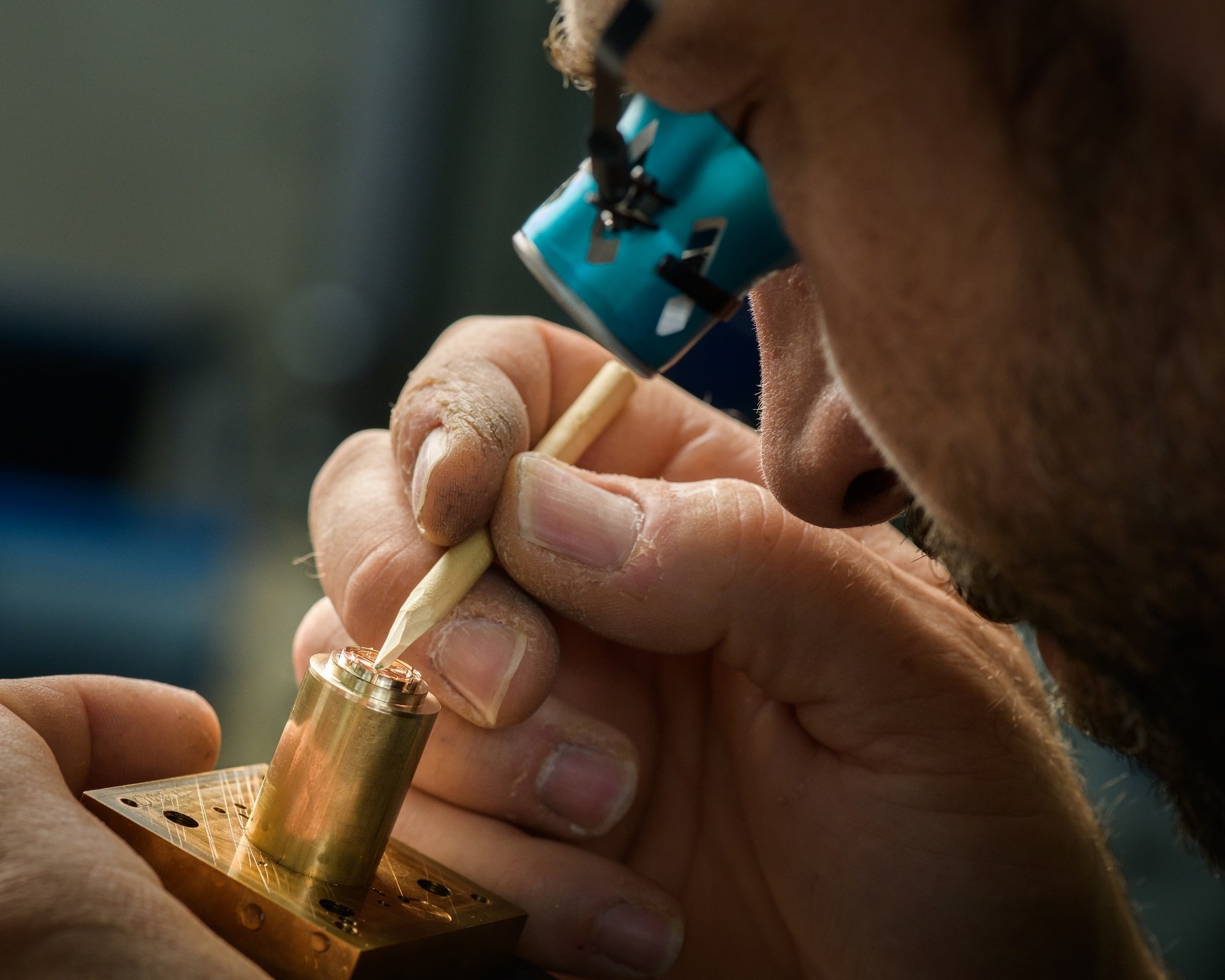 Making of the balance wheel of the Hand Made 1

A watch that is 95 percent hand-made

Apart from a foundation, individual watch brands also do their part and share responsibility in keeping watchmaking traditions alive. The Handmade 1 by Greubel Forsey, for example, is a watch inspired by 18th- and 19th-century watchmaking, a period when the limits of mechanical ability were stretched time and time and again. Not a single computer-controlled CNC machine was used in the making of parts. 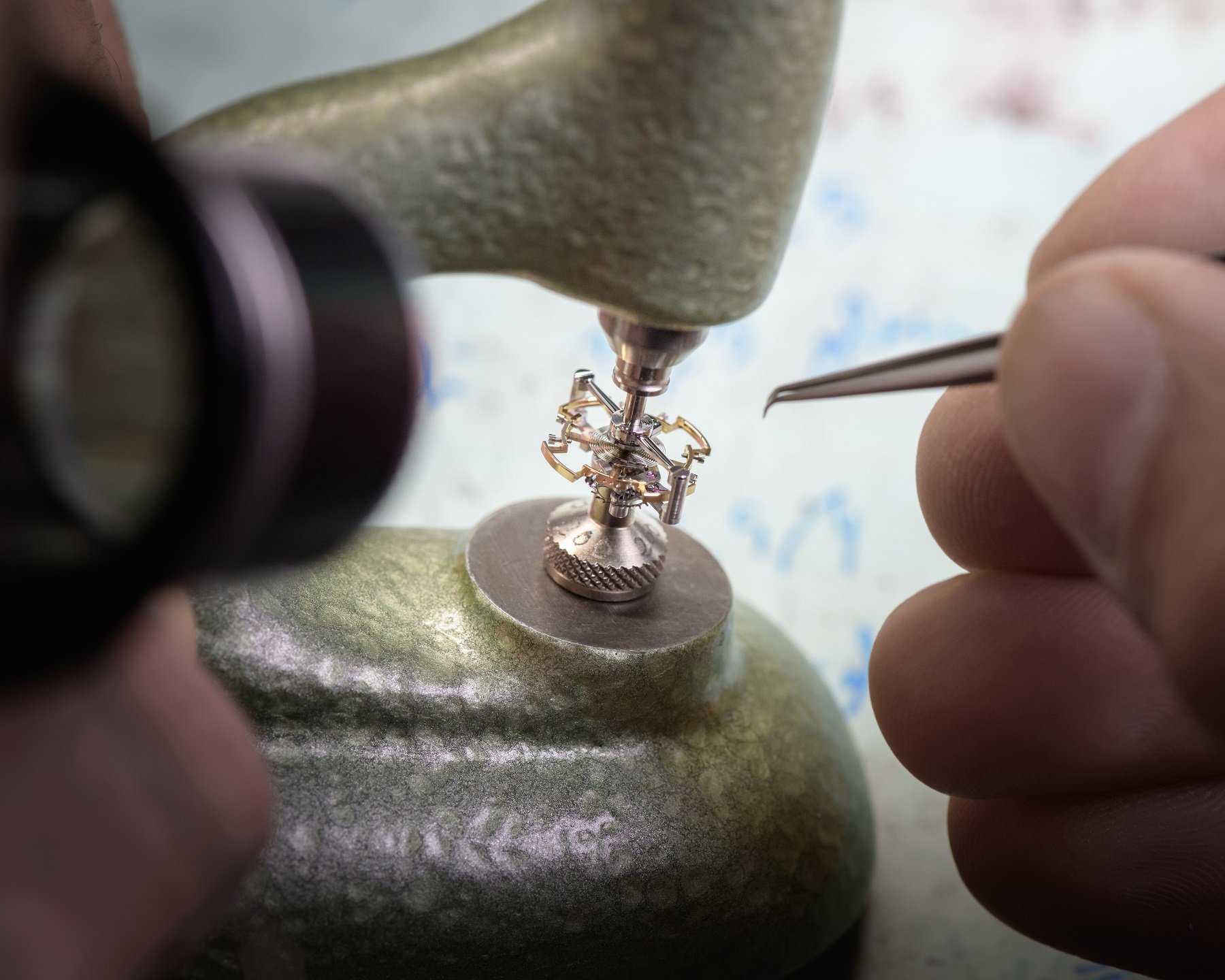 Assembly of the Greubel Forsey Hand Made 1

That sounds idyllic, but it doesn’t exactly make the creation of a tourbillon watch made up of 272 components any easier. About 95 percent of the watch, including the delicate balance spring, is made in-house using hand-operated tools. It takes 6,000 hours of work. To put that in perspective, that is equivalent to working full-time for three years. It also leads to a price of 1 million Swiss francs. 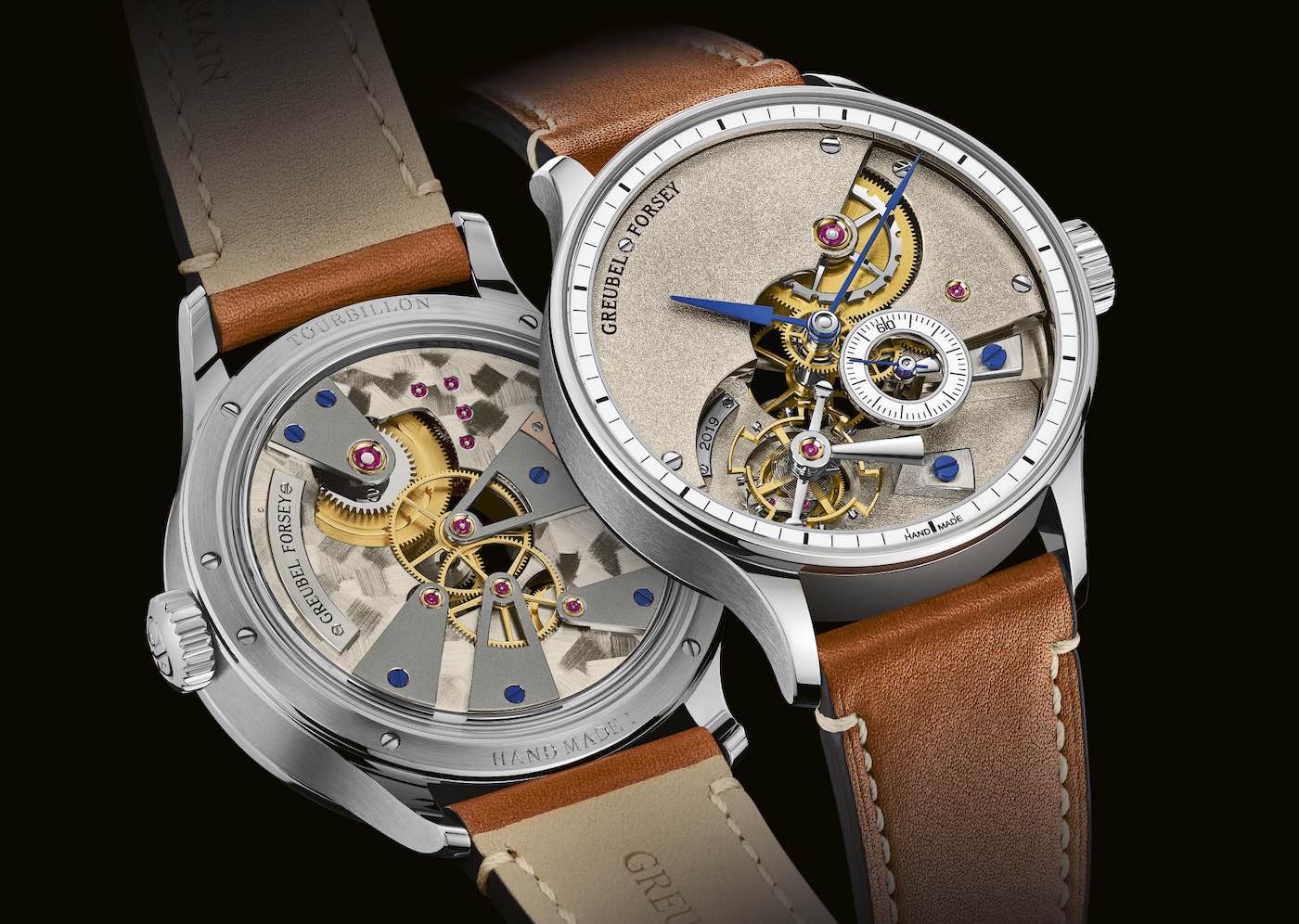 Chronométrie Ferdinand Berthoud, the brand involved in the third Naissance d’une Montre, is also committed to keeping the rich Swiss watchmaking tradition alive. And when we say Berthoud, we mean Karl-Friedrich Scheufele, co-president of the watch and jewelry brand Chopard. Scheufele is the driving force behind the small brand that bears the name of the 18th-century scientist and watchmaker. 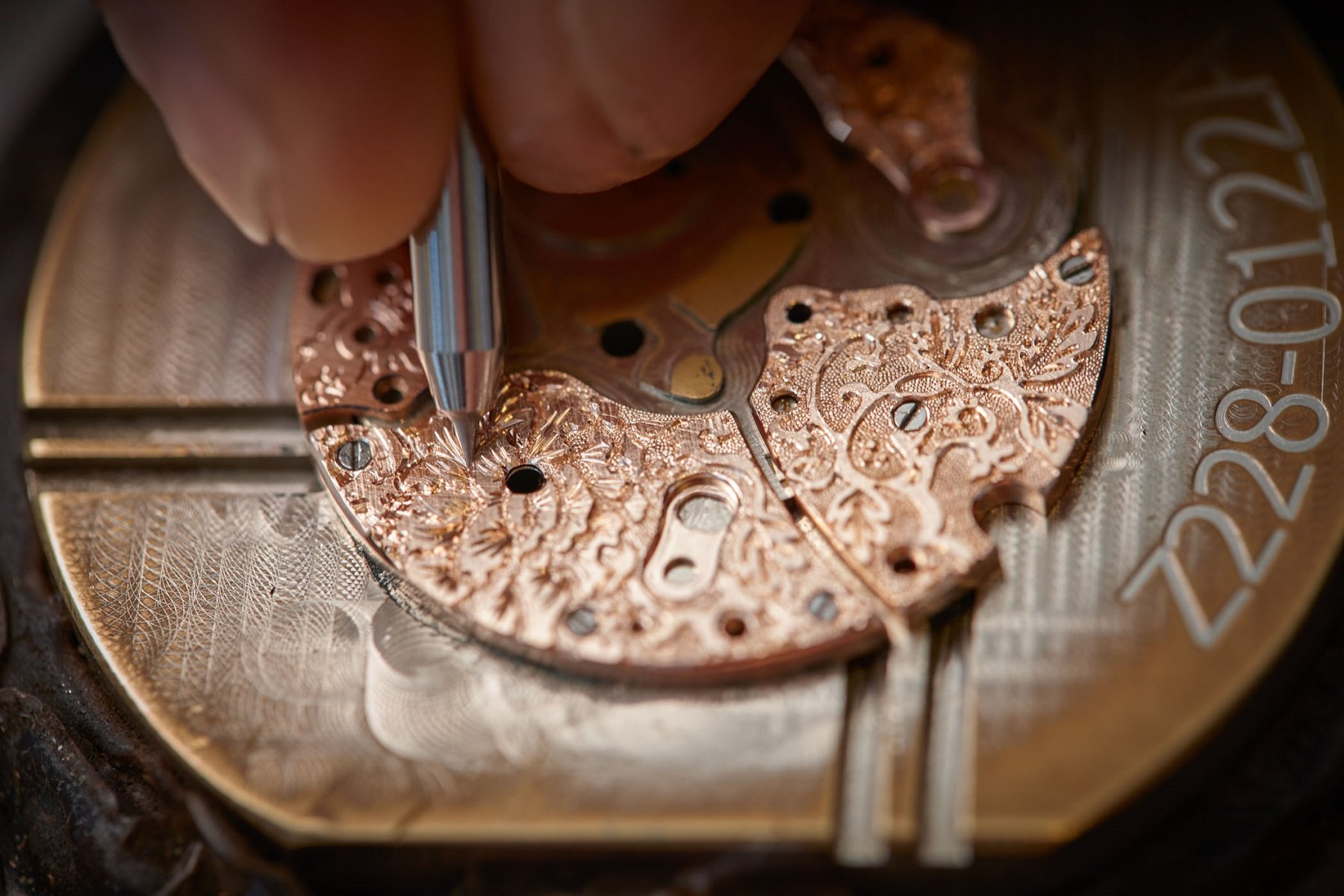 Scheufele has already shown just how much he cares about traditional craftsmanship. In Fleurier, the Swiss village where the L.U.C watch manufacture of the brand is located, Scheufele found out that the regional Fleurisanne engraving technique was in danger of extinction. There was only a single remaining craftswoman capable of producing the delicate Fleurisanne engravings. Scheufele assigned her a number of students and so the craft was saved from extinction. Just in time. 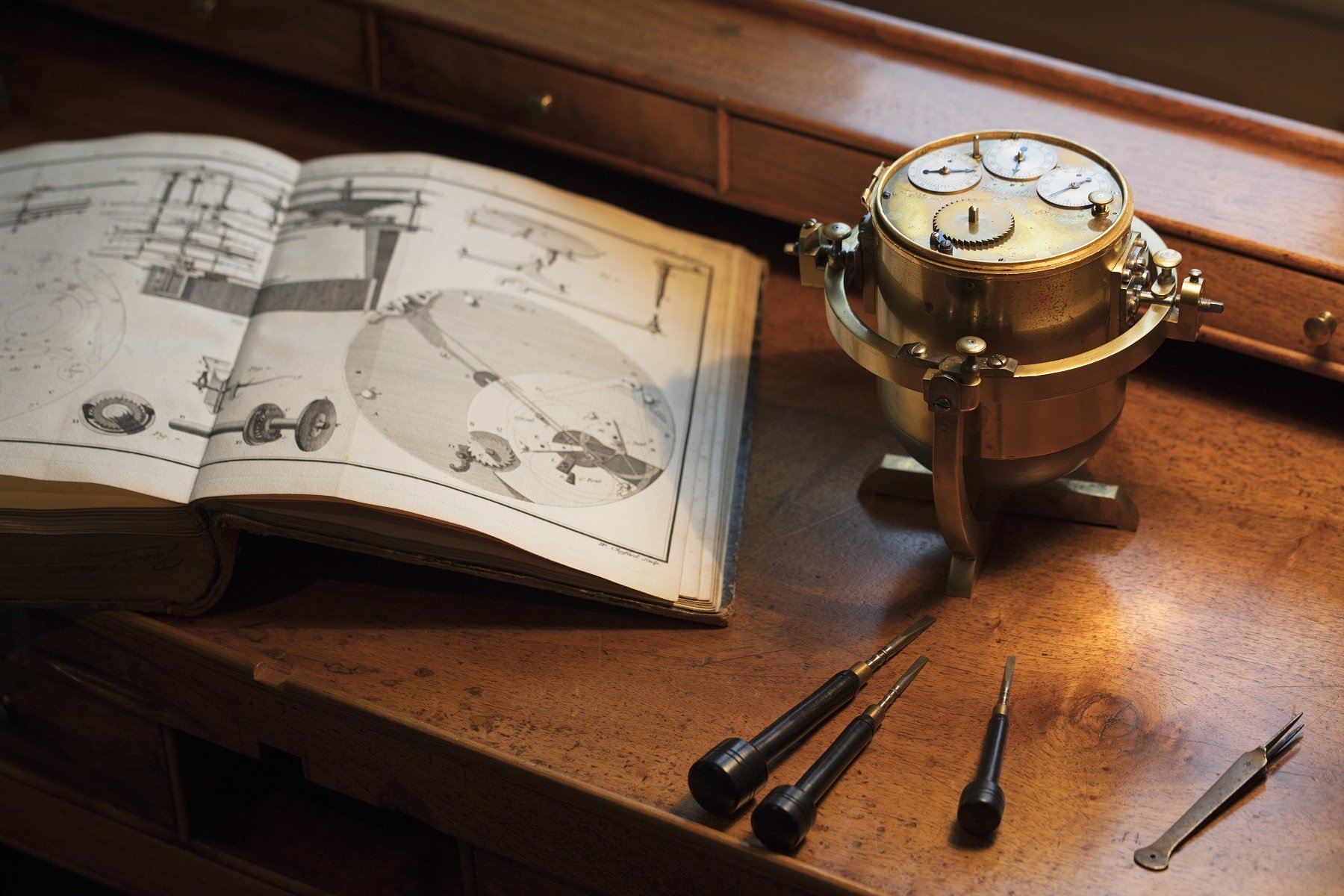 Inspired by an astronomical pocket watch from 1806

We showed you the stunning Ferdinand Berthoud Limited Edition Régulateur Squelette on Fratello before. And with Chronométrie Ferdinand Berthoud, Scheufele reveals his most complicated and artisanal watch side. The Chronomètre FB 1 “Oeuvre d’Or” is a complicated watch in terms of mechanics and decorations. The engravings on the gold dial and bridges of the timepiece are completely handmade. 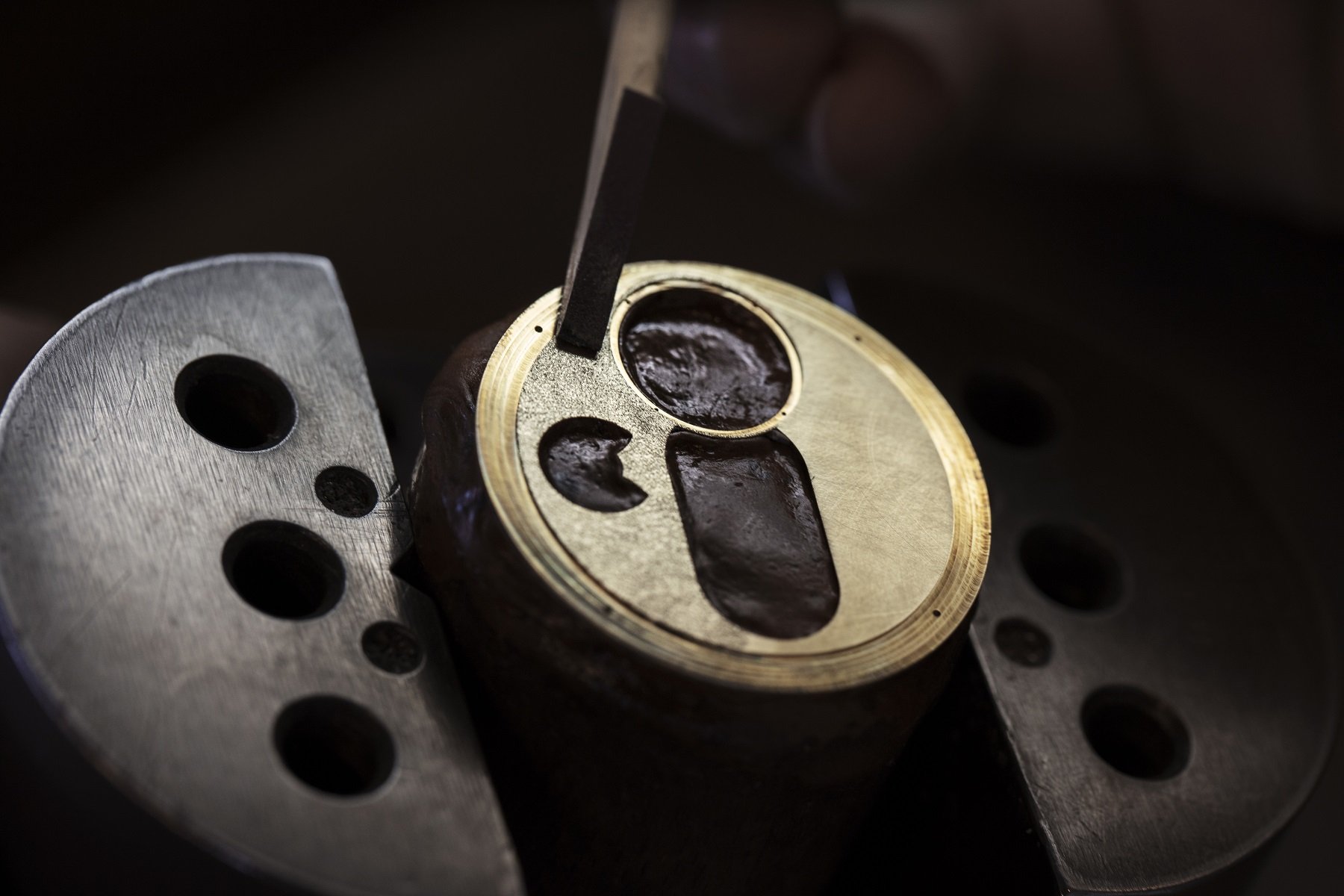 The watch is an homage to the astronomical pocket watch No. 3 manufactured in 1806 by Ferdinand Berthoud’s pupil Jean Martin in his Paris workshop. The movement in the Chronomètre FB 1 was a baptism of fire for the new brand, taking years of development.

This technique of attaching bridges to the base plate had not been used since the 18th century.

Precision was and still is central to Ferdinand Berthoud. In 1760, the old watchmaker presented to the French Académie des Sciences his “Mémoire sur les principles de construction d’une Horloge de Marine”. This description of the construction principles for a ship’s clock is the foundation for Ferdinand Berthoud’s very first ship’s chronometer. In 1761, the chronometer was ready. The FB 1 collection by Chronométrie Ferdinand Berthoud pays tribute to this work. The timepiece’s characteristic pillar-like structure harkens back to the original design. This technique of attaching bridges to the base plate had not been used since the 18th century. It reduces weight while providing an unobstructed view of the details and finishes. 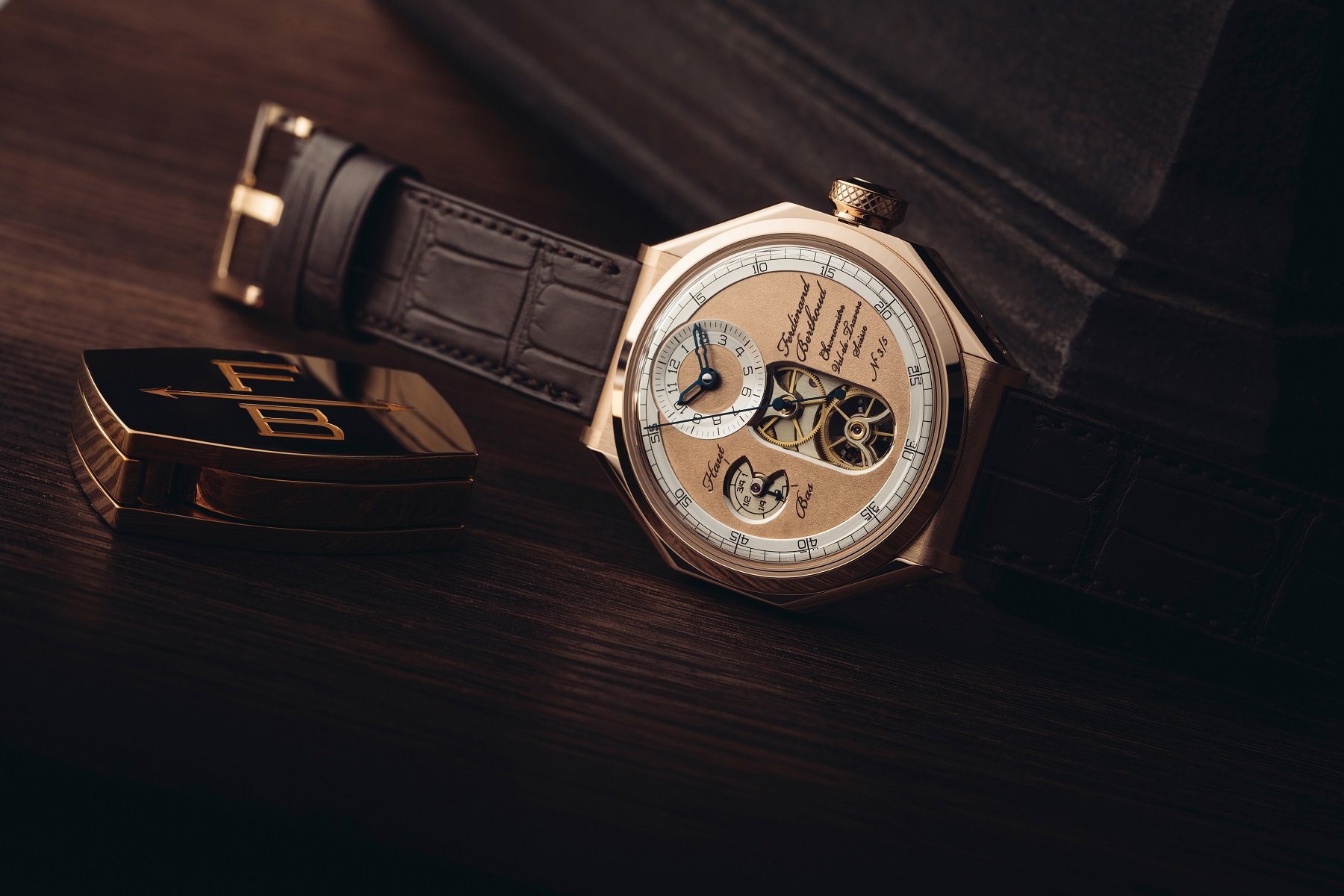 Understanding the old and on with the new

For men like Scheufele, Greubel, and Forsey, awareness of the historical importance of traditional watchmaking is paramount. And awareness leads to continuity and the crucial development of new technology. At Greubel Forsey, we see watches that bring together past, present, and future. Titanium — the material used for the futuristic GMT Sport — is a relatively new material that is worked on by hand in an unusually traditional manner. By understanding the old you can make the new. This is something that goes for all watch brands, not just Greubel Forsey. It’s the foundation of modern Haute Horlogerie. By evolving the mechanical watch, with new inventions like they did in the 18th and 19th centuries, and by passing on that knowledge and those skills to young watchmakers all over the world, the mechanical watch can survive in the long run. 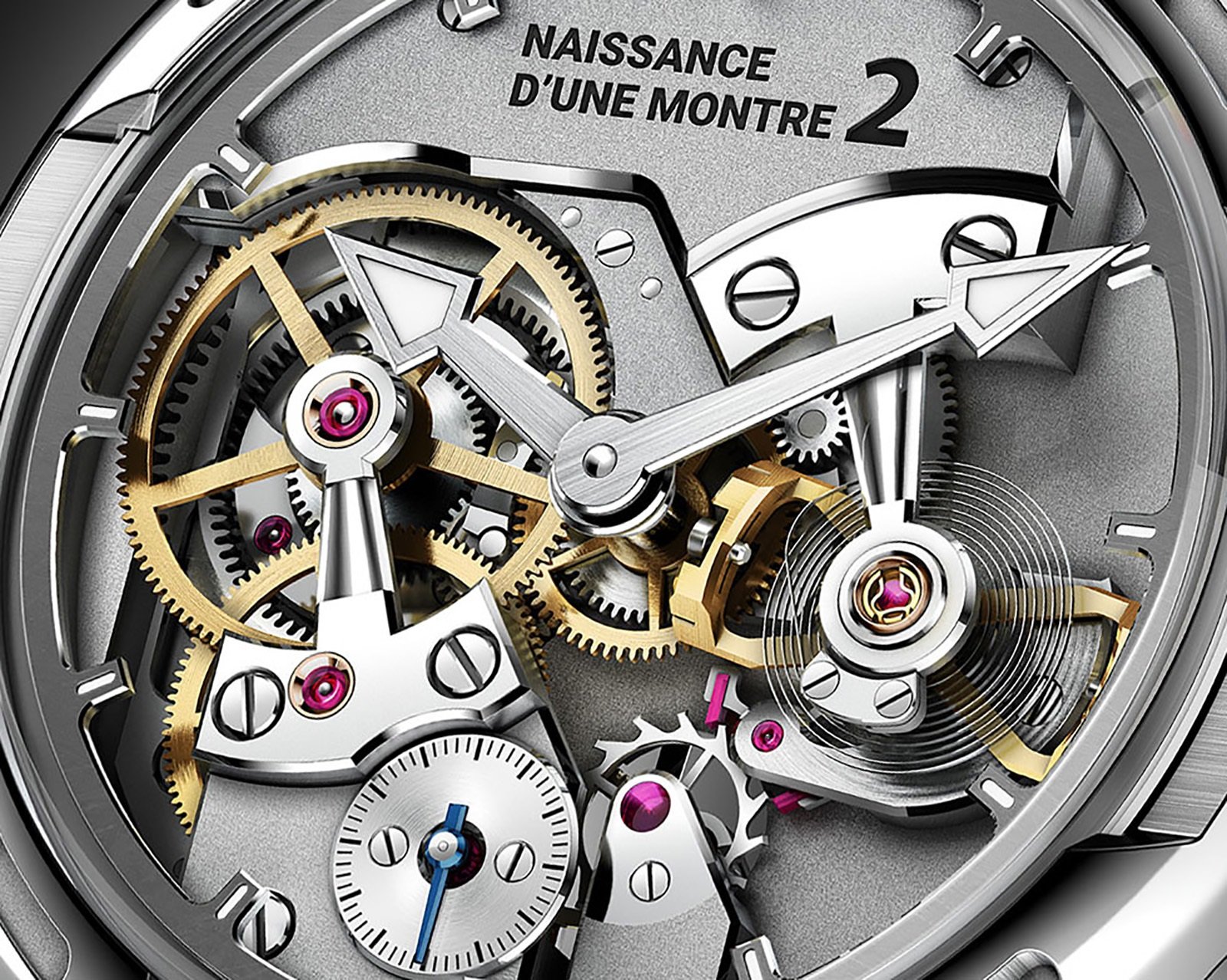 Thanks to UNESCO, and the other “Guardians of Watchmaking”, the significance of watchmaking — in its past, present, and future — is now indisputable. Watchmaking and especially the artisanal aspects that surround it, need to be carefully protected and cherished. It is also important for it to reach a new generation of people active in all kinds of watchmaking fields. Mechanical watchmaking does indeed have an important economic function. But also continues to shape the society and daily lives of people in the industry. 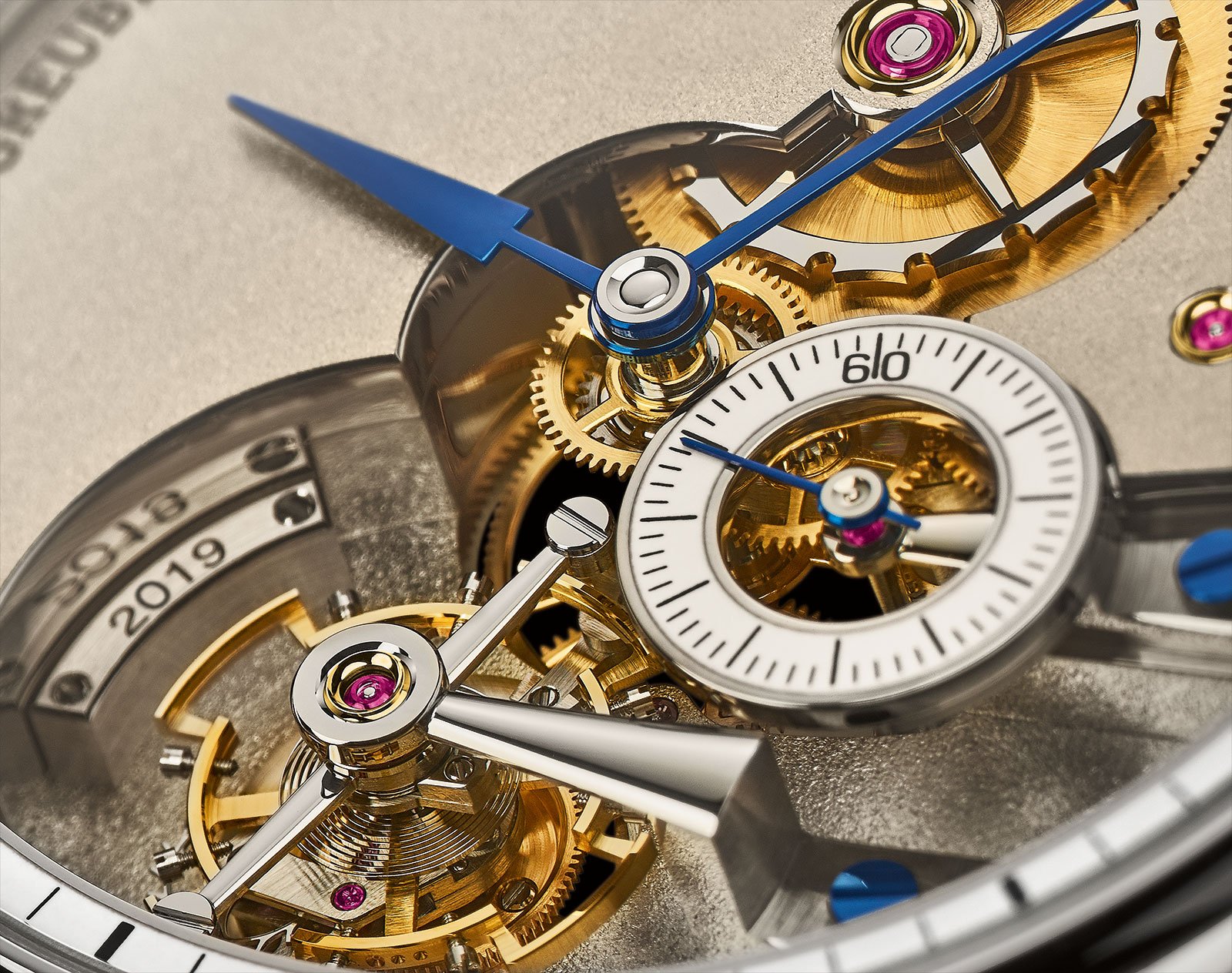 Technical innovation is also much more than just mechanical evolution. It is one of the keys to getting young people interested in watchmaking professions and to keeping the tradition alive. And when the tradition is alive and kicking in the function of the future, not just the watchmakers in the Arc Jurassien will live happy lives. No, it stretches further than that. It will also make this generation, as well as future generations of watch lovers all around the world, live happy, horology-filled lives.

Hot Topics
Introducing: The Omega Speedmaster Super Racing With Spirate System
165 comments
Design Vs. Specs — Which Is More Important To You When Buying A Watch?
86 comments
My Predictions For New Omega Speedmasters In 2023
54 comments
The Time To Buy Is Now: How The Current Economic Climate Influences Watch Buying And How You Should React
51 comments
A Regret-Free Guide To Buying Your First Luxury Watch — Part Three: Higher-End Options From Omega, Rolex, Grand Seiko, And More
48 comments
Popular
Certina DS PH200M – Hands-On Review
Balazs Ferenczi
23
Grand Seiko SBGA211 ‘Snowflake’ And Why I Didn’t Buy It
Robert-Jan Broer
23
You Asked Us: Rolex Submariner vs Omega Seamaster
Robert-Jan Broer
25