The story is well-known, the “Fifty Fathoms” watch was designed for the French navy. Originally, French officers Bob Maloubier and Claude Riffaud started to work together on requirements in 1952 for a watch to be used during under-water missions. Diving watches at the time were a piece of equipment that men depend their lives on. After testing some watches, they were quite disappointed with the results. Until they met Jean-Jacques Fiechter, CEO of Blancpain from 1950 till 1980 and a passionate diver himself. Fiechter understood the need for a proper divers watch and even before Rolex came up with their Submariner and Omega with their Seamaster 300, Blancpain was able to come up with a watch that was able to perform the task for the French Navy.

Blancpain was the company that patented several ‘gasket’ solutions for crown and case back as well as bezel that could be blocked. Later on, Blancpain was the first to come up with the uni-directional bezel, a feature that was regarded as a life-saver for divers. 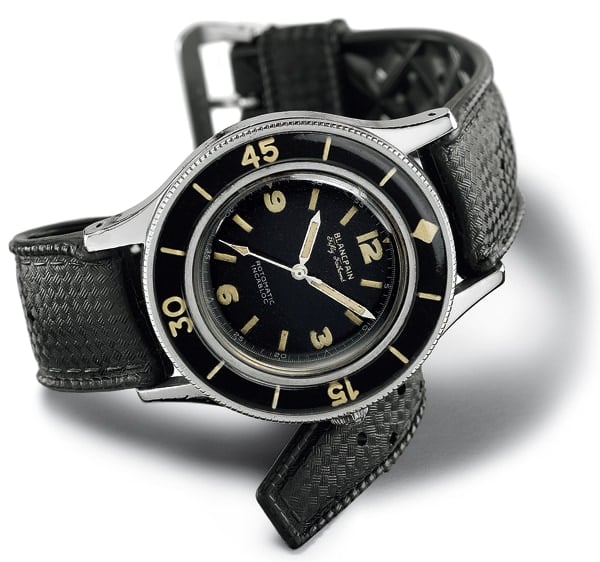 After Blancpain delivered the first watches to the French navy in 1953,  the Fifty Fathoms. Fifty Fathoms was an indication for the water resistance of the watch. An English fathom was a measuring unit for depth. 50 fathoms would add up to 91,44 meters.

The work of Blancpain CEO Jean-Jacques Fiechter did not stop here. He continued the quest for creating that perfect and reliable divers watch and soon came up with this indicator for the water resistance of the watch. In case the watch leaked and water had entered, the indicator on the dial would change color from white to red. If your life depends on a water resistant watch, an indicator like this makes perfect sense. In fact, the Blancpain Fifty Fathoms model that had this feature was called the MIL-SPEC 1 (“Military Specifications”). Introduced in 1957-1958, to meet the military requirements. Early 1958, the US Navy started to test various watches for their under water activities as well. As a result of those tests, the Blancpain Fifty Fathoms became the standard-issue watch for US combat swimmers. In the meanwhile, also the Navy Seals were equipped with the Blancpain Fifty Fathom MIL-SPEC 1 watches. 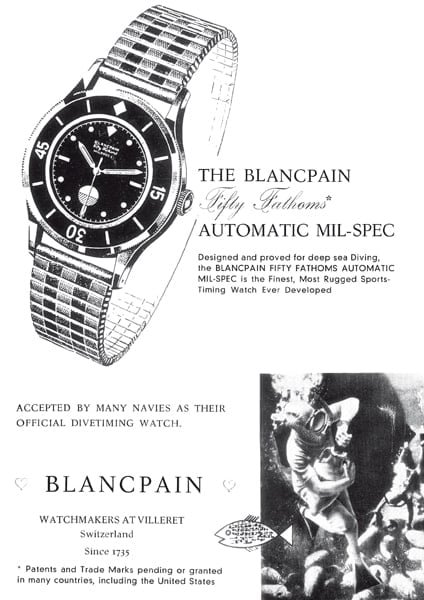 This year, Blancpain showed us their Fifty Fathoms Tribute to MIL-SPEC watch. Based on that first Fifty Fathoms with MIL-SPEC 1 from 60 years ago (see image above). I must say that I was totally smitten by this Fifty Fathoms edition, limited to 500 pieces only. The Blancpain Fifty Fathoms is probably the model I would opt for if I were in the market for a high-end diver.

Although not every detail is spot-on, nor should it be in my opinion, the Fifty Fathoms Tribute to MIL-SPEC is clearly related to the very first Fifty Fathoms and even more so to the 1957 MIL-SPEC 1 watch. 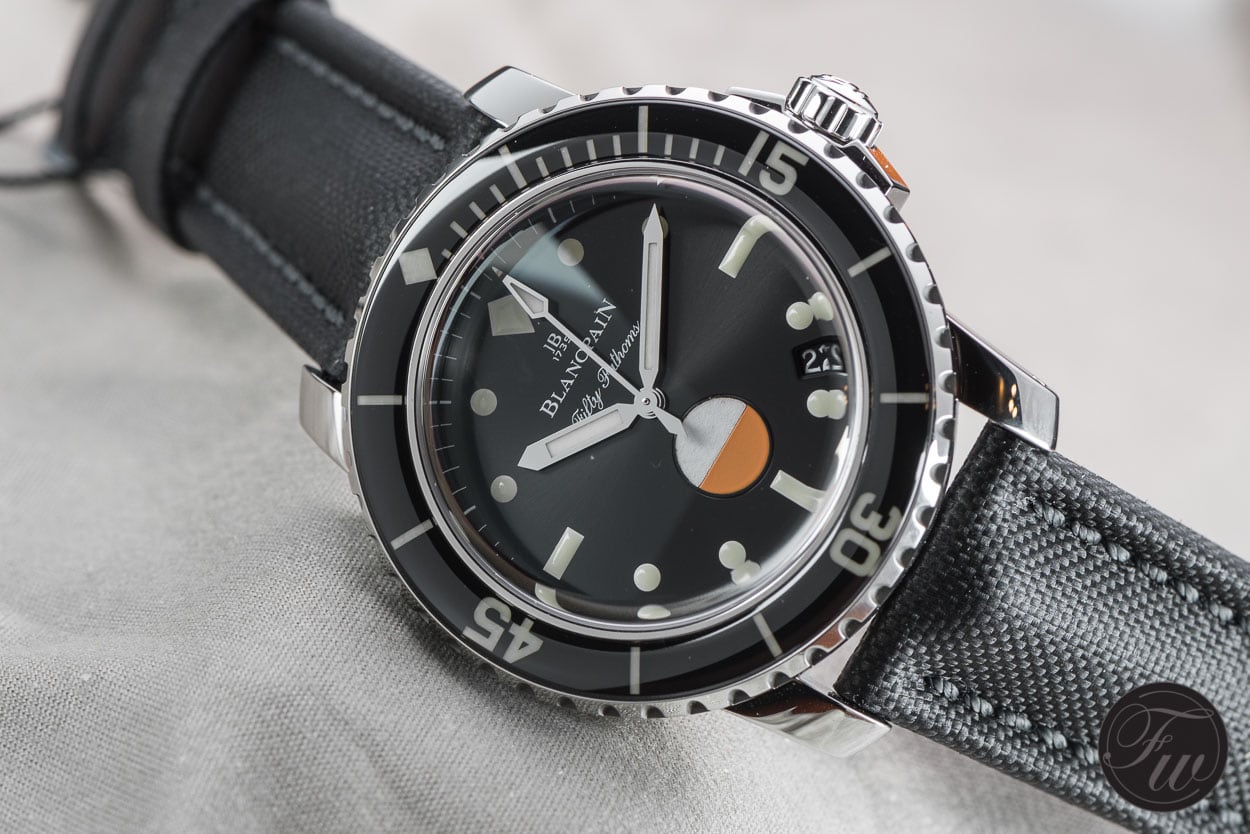 The Blancpain Fifty Fathoms Tribute to MIL-SPEC has a 40mm case made of stainless steel, that sits very comfortably on the wrist. It measures 13.2mm in thickness, so it does fit under your cuffs without much problems.

In my opinion, but I haven’t seen the original Fifty Fathoms in the flesh, the lugs are a bit more sleek on the vintage models, or perhaps the diameter of the case just changed a bit. However, on the wrist it feels good and fits perfectly. The uni-directional bezel that is made of sapphire (a Blancpain invention from 2003) is easy to grasp and does its job. You could wonder though how many people will bring their limited edition Blancpain Fifty Fathoms Tribute to MIL-SPEC really into the water. Why would you risk such a limited and collectible piece, besides the price tag of $14,100.- USD. I guess it is a bit like a Mercedes AMG G55 wagon, if it’s really necessary you can go off-road with it, but most of them are used on the tarmac. 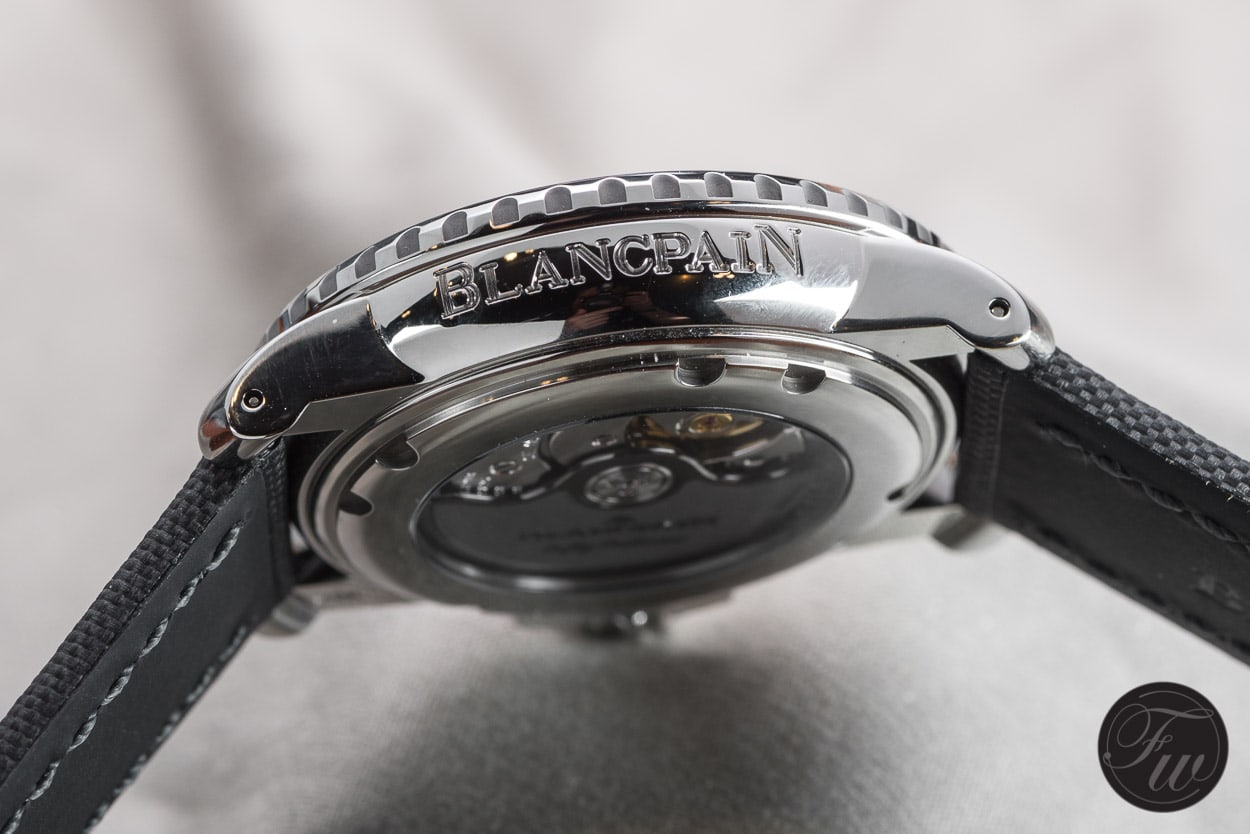 On the case band you’ll find an engraving of the ‘Blancpain’ brand name. I know their other models have this as well, but for me personally it wouldn’t have been necessary. The typography is nice though and it gives the watch an extra detail. On the other side you will find a massive little crown guard to protect the winding crown. The crown has been signed ‘Blancpain’, of course. See below. 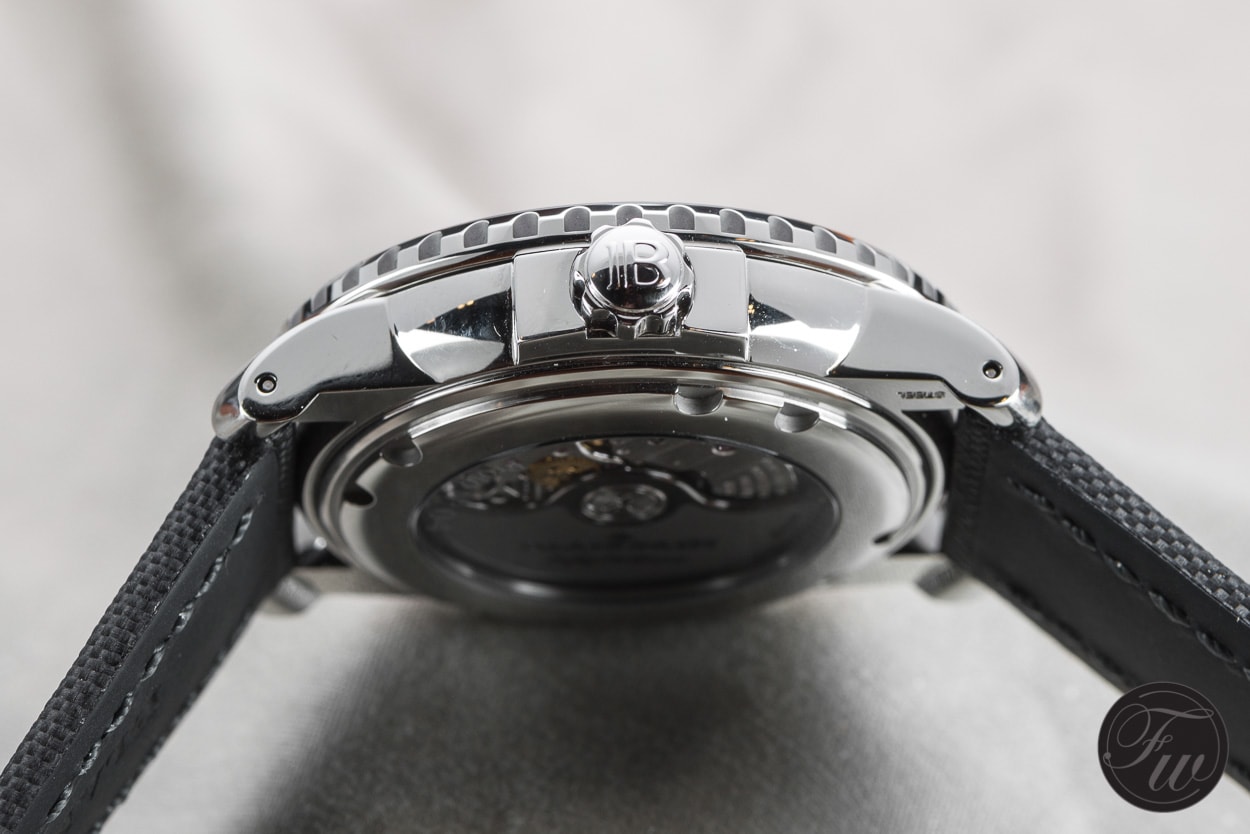 The one feature that makes this watch the ‘Tribute to MIL-SPEC’ is of course the indicator on the dial, located at 6 o’clock. As you can see, the white/orange circle is prominently visible, a requirement if you use this watch under water. As written, once water has entered the watch, the color will change and then you know you have to get out of the water and get your watch fixed. If you do use a watch like this in the water though, make sure to have it checked every year for proper working seals, like any other diving watch.

On the dial you also find a date aperture between 3 and 4 o’clock. Very convenient, but a watch like this could definitely do without. Personally I don’t get a date on a watch, I look at my phone or computer in the morning and see the date in front of me. I can remember the date the rest of the day, I don’t need a constant reminder. But I also know a lot of people think differently, and they insist on having a date on their watch. The date disc has the same color as the dial, and the printing of the numerals has been done in contrasting white. 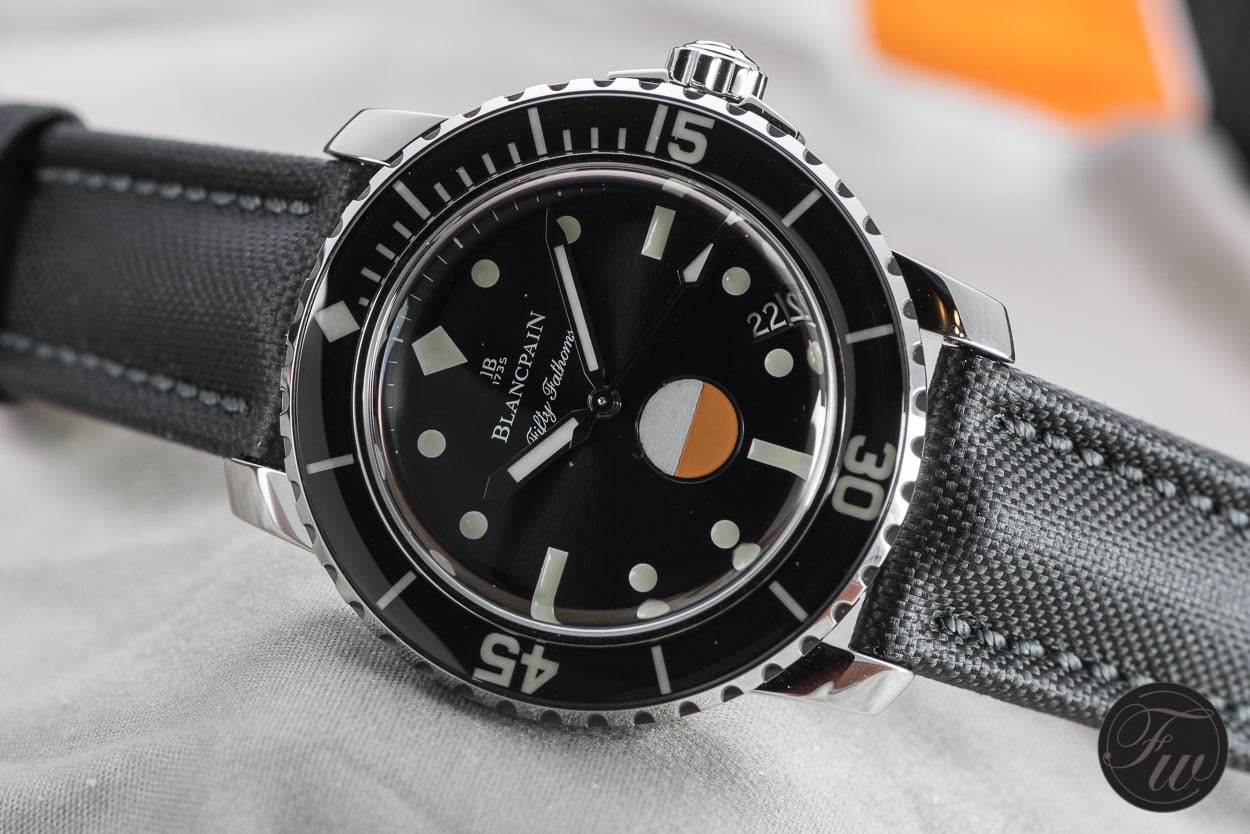 Then there’s the back side of the Tribute to Fifty Fathoms, showing off its mechanical heart. The Blancpain Calibre 1151, a movement that consists of 210 parts and has two main spring barrels (in series) that will supply you with a four-day power reserve. The solid gold rotor has this NAC coating (a platinum alloy) that shows the Blancpain logo in bas relief. Furthermore, caliber 1151 has a silicon balance spring that is more shock resistant and anti-magnetic than conventional balance springs. The movement has a superb finish as you can see on the picture below that we took. 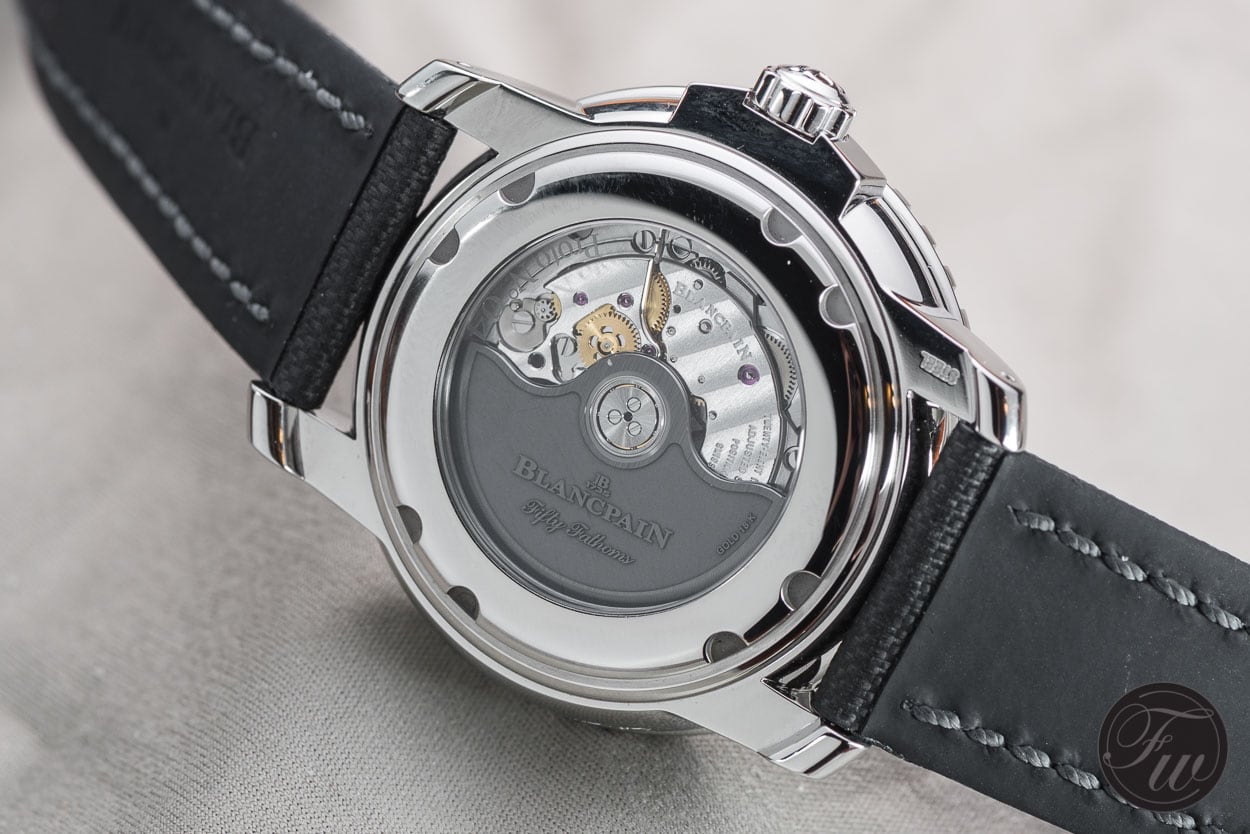 The Blancpain Fifty Fathoms Tribute to MIL-SPEC is a beautiful version of this famous diving watch collection. As written above, it is limited to 500 pieces only and comes on a sail canvas strap (as pictured), a NATO strap or a stainless steel bracelet. The lug-size is 20mm, so it would also be very easy to attach your own favorite strap or bracelet to this watch. I can imagine that a vintage looking leather calf strap would also look amazing.

Although the name is ‘Fifty Fathoms’ and we know that this equals 91,44 meters, this model is water resistant to 300 meters (~30 bar). The retail price of this watch is $14,100.- USD. Availability is unknown at this point though.

In November 2017, Blancpain will donate a one-off watch inspired by this Tribute to MIL-SPEC for the Only Watch auction to support the Monaco Association against Muscular Dystrophy (AMM). We will give an update later on.

Hot Topics
Introducing: The New Seamaster Professional 300M 60 Years Of Bond — With A Special Animated Case Back
104 comments
Are You Still After An Omega × Swatch MoonSwatch?
79 comments
It’s Time To Invest In A Dress Watch — Our Picks From Breguet, Omega, Grand Seiko, And More
71 comments
Sunday Morning Showdown: The Tudor Pelagos Provocation — Pelagos Vs. Pelagos 39
55 comments
The Rolex Waitlist Conundrum — How Much Will The Price Of Your Watch Increase While You Wait?
48 comments
Popular
An Overview Of All Omega Speedmaster Apollo XI Models
Robert-Jan Broer
17
(From The Archives) Shut Up & Read The Truth About Cartier Watches
George Cramer
21
Two Patek Philippe Nautilus Watches: 3700/1A Versus 5711/1A
Robert-Jan Broer
16