As a follow-up to our recent article on the limited edition Eterna KonTiki Bronze Manufacturer, we’re back with a look at the steel serial production models, the new Eterna KonTiki Diver. While it does usher in some cost saving specifics versus the bronze model, there’s a lot of value for the money in this watch. 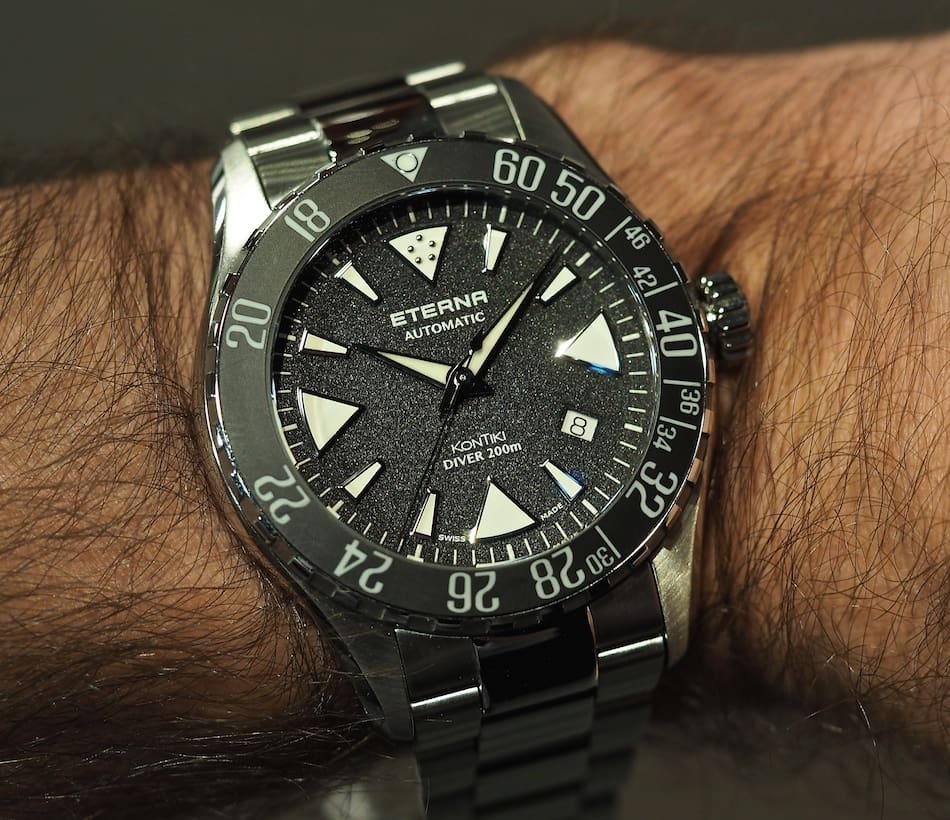 Once again, 2017 marks the 70th anniversary of Thor Heyerdahl’s legendary voyage from Peru to Polynesia and this year’s release of the Eterna KonTiki Diver is meant to evoke some of the cues used on the diver models that Eterna released after the voyage in the 50’s and 60’s. Those typical Eterna triangular indices and a classic diver’s case with unidirectional bezel are certainly familiar to collectors of the brand. 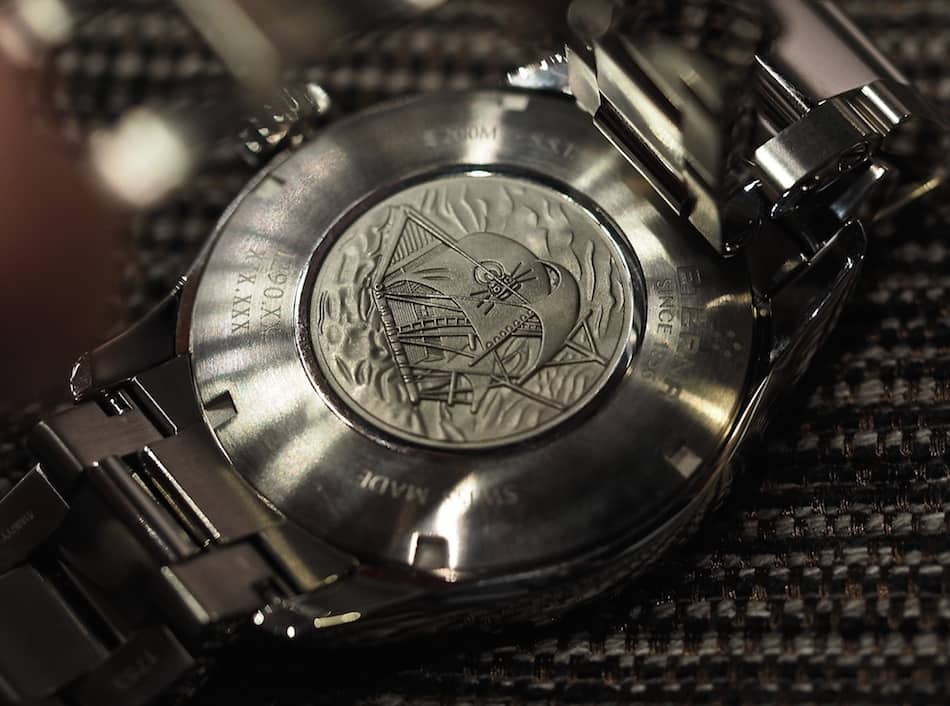 In a change from the Bronze model, the stainless Eterna KonTiki Diver pieces are offered in four different dial colors – black, white, and blue – and either a strap or bracelet depending on the dial chosen. The black can be ordered on bracelet or rubber strap with deployant, while the white only comes on bracelet and the blue only on strap. A touch odd perhaps, but I guess the marketing folks feel that blue deserves a sportier look. A 44mm case is employed with 22mm lugs along with a great looking matte-ceramic bezel with US Navy “no decompression” scale. The case back is solid, thankfully, and we get a cool inscription of the original KonTiki “raft”. 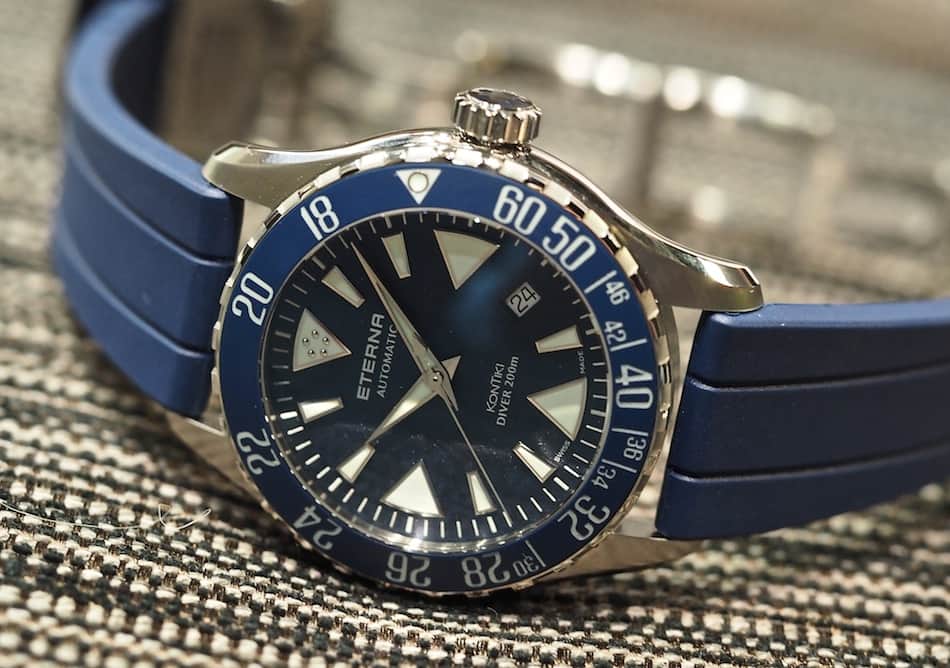 Water resistance for the Eterna KonTiki Diver is 200M and in a departure from the limited model, Eterna chose to use the workhorse Selitta SW200 automatic. It’s a nod to keeping the price down, but it’s certainly interesting that Eterna’s own movements are deemed as too expensive. Another difference in the steel edition is that it contains a date window at 4:15. As far as date windows go, it’s pretty unnoticeable although white with black numbers is used no matter the dial color. While I don’t need a date, it’s clear that the general watch buying public wants one. Crown-wise, we get a massive screw down featuring the 5 ball-bearing logo that symbolizes Eterna’s contribution to automatic movement history and helping to make the rotor friction free. 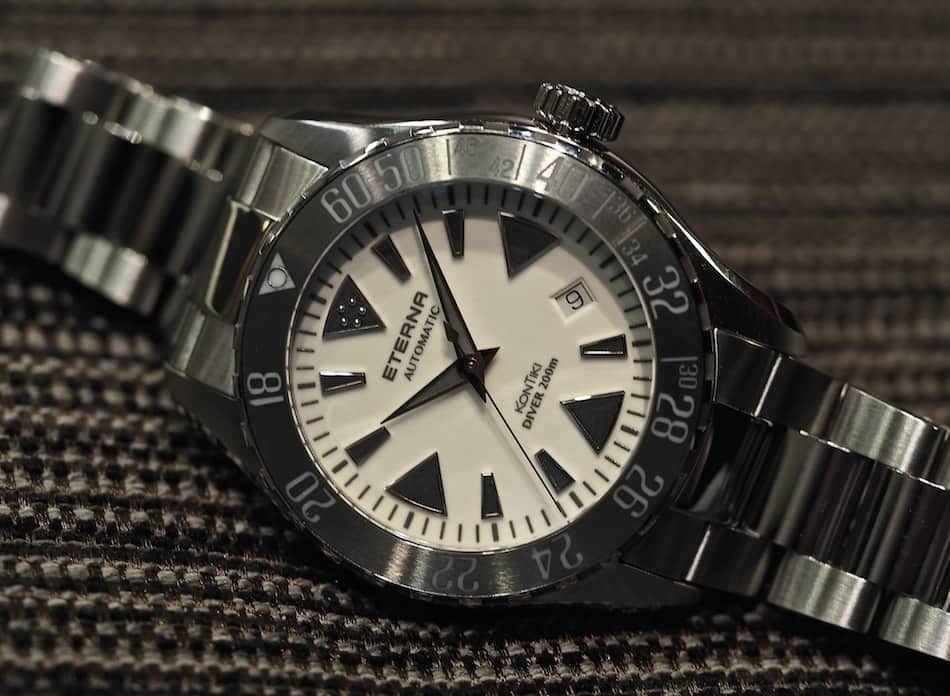 Dial-wise, the Eterna KonTiki Diver has a cool “crackle-paint” type of finish that looks great depending on the angle of view. It’s made even more exotic with the large applied arrow-shaped indices that are filled with lume. Hands are daggers and what you’re left with is a bold and highly legible dial. As far as large, no-nonsense divers, I think this ranks as one of the better faces – it’s that simple and clear. The white dial, which is combined with a grey ceramic bezel that looks like steel (think Omega Grey side of the Moon and you’re not far off the mark), is especially different because the entire dial glows a greenish color while the “black/grey” Superluminova glows differently. It’s definitely a feature that separates itself from the other models. 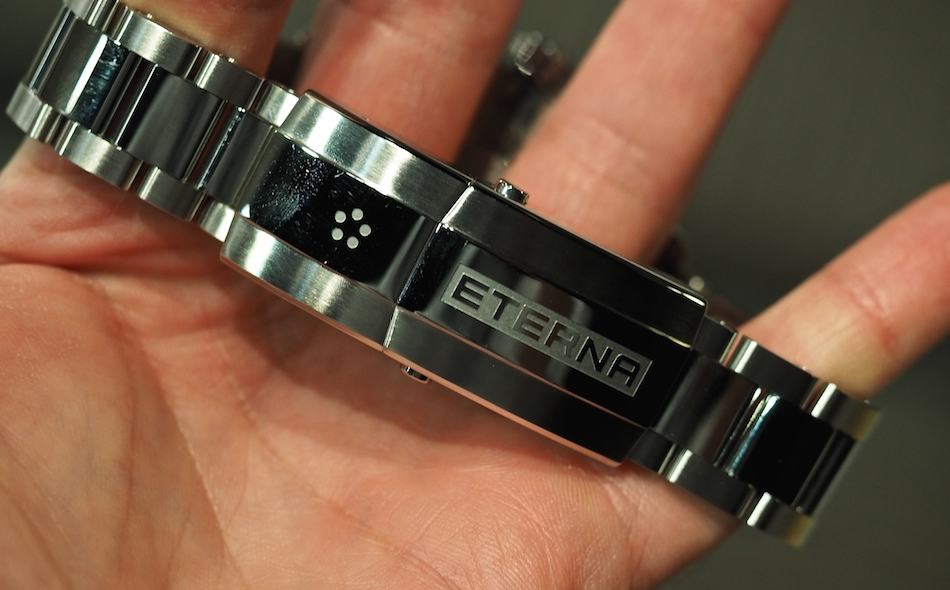 I was also highly impressed with the appendages to the Eterna KonTiki Diver no matter what is chosen. The bracelet was smooth, had the right weight – not too heavy as many choose to emit a false sense of quality, but not too light – and the large buckle with wetsuit extension was nice to operate. The finishing was impressive despite the use of polished center links. The rubber strap is soft and uses the same deployant as seen on the bracelet. 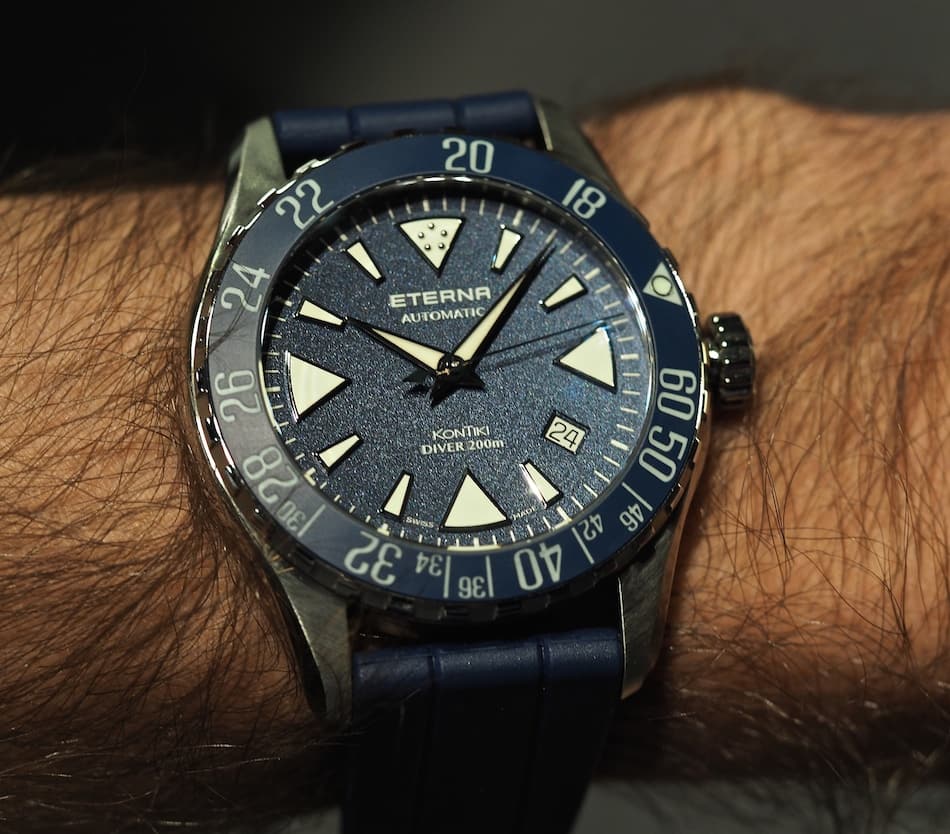 I haven’t gotten around to the best part of the Eterna KonTiki Diver and that’s the price. At 1850 Euros on rubber and 1950 on bracelet, this watch is a steal. It fits my dinky wrist, has some serious presence and I was genuinely impressed by the finish quality. Plus, it’s a brand with history and it strikes me as a truly great everyday wearer that, especially on bracelet, could serve as an only watch that fits both work and play. I loved the finish on the blue dial and the white dial’s bezel looked befitting of a much more expensive watch. The black version is classic and will certainly pick up the volume; it makes sense that this is offered in both rubber and steel. 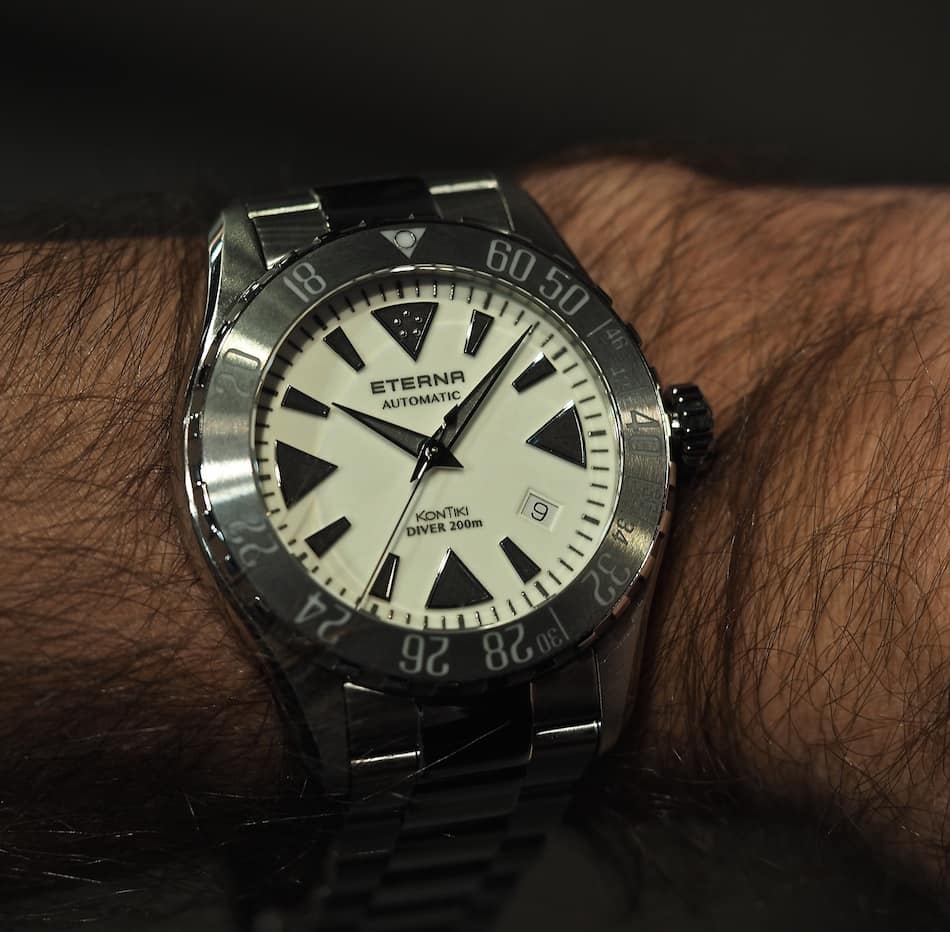 The approachable dive watch category is definitely a crowded one with nice pieces out there from Longines to Sinn to multiple others. The Eterna KonTiki Diver joins the ranks as a really nice option and its one that combines the brand’s heritage touches with modern tech (the ceramic bezel) into a really nice package. The four of us who attended the meeting with Eterna were all equally impressed. We often think of Eterna as somewhat of an eccentric, non-mainstream choice, but with this product, I’d reckon that the brand has a real shot of becoming a large volume player. Expect delivery in the September, 2017 timeframe.

Eterna’s website is not yet showing the Eterna KonTiki Diver, but head here for more information on the brand.