Despite being completely unpronounceable, this watch is just plain outright cool. The brainchild of Max Büsser (MB&F) and Felix Baumgartner (URWERK), it is the first watch to use an eccentric planetary transmission system for the timekeeping mechanism – i.e. the same geometry as the Wankel engine. 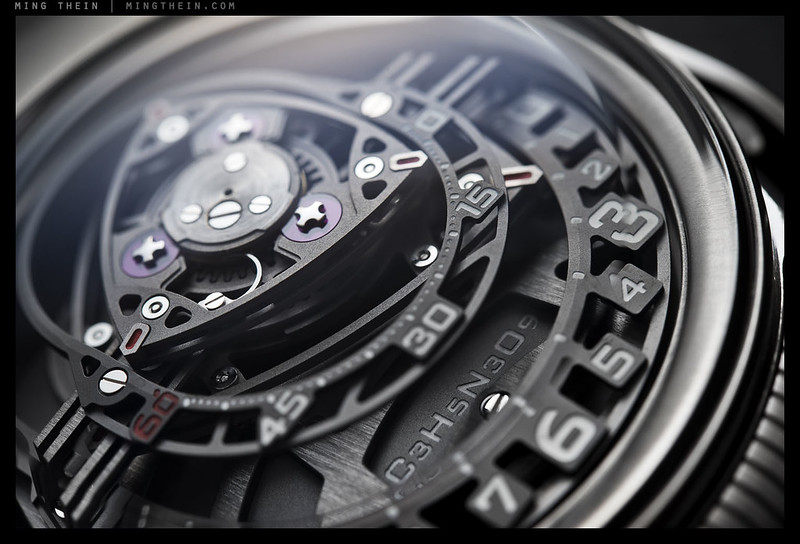 Curiously, there’s only one ratio of inner to outer satellite that actually permits the three distinct chambers to be formed; any other ratio doesn’t seal at all. The minutes are read off the red tips of the upper ‘rotor’, with the hours on the level below. There is no seconds indication, but there is a power reserve indicator on the back of the watch. All of the indications are luminous, including the red tips – but the red is overlaid on top of the super luminova, so it isn’t quite as legible. (But with a watch like this, who really cares about the actual time anyway? 🙂 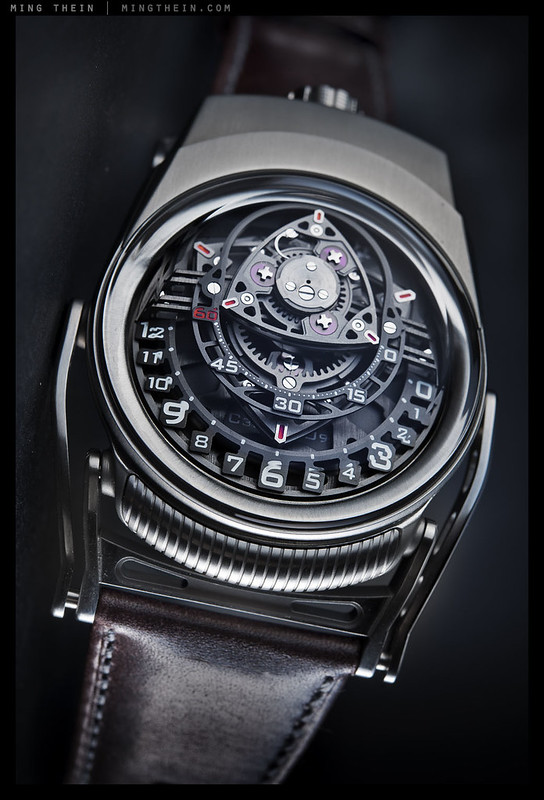 The case is made of Zirconium; it’s light, warm to the touch and vaguely reminiscent of Titanium, but not quite as yellow color-wise. The crown screws down, and the watch is hand wound – I wonder if this might get a little tedious after a while. Despite the enormous size, the lower lugs are articulated and the watch wears very comfortably, even on small wrists. (The wrist shot is of a gentleman with about 6.75″ or so; I’ve got slightly smaller wrists and it sat well on me, too.) 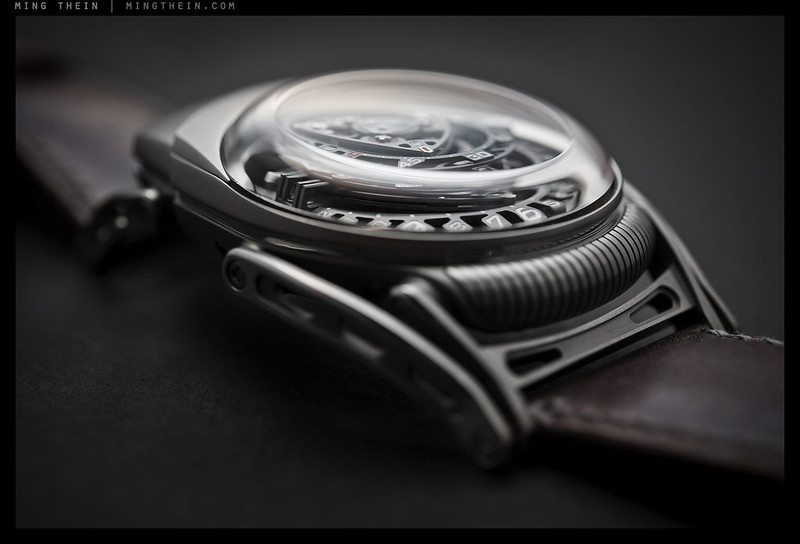 The watch is a limited edition of 12 pieces, but the first in a line of ‘experiments’ – a collaboration between Max Büsser and Felix Baumgartner to produce pieces that wouldn’t necessarily fit into either of their own brands. Admittedly, the first one does feel a lot like the offspring of MB&F and Urwerk. I’m looking forward to seeing what comes next! 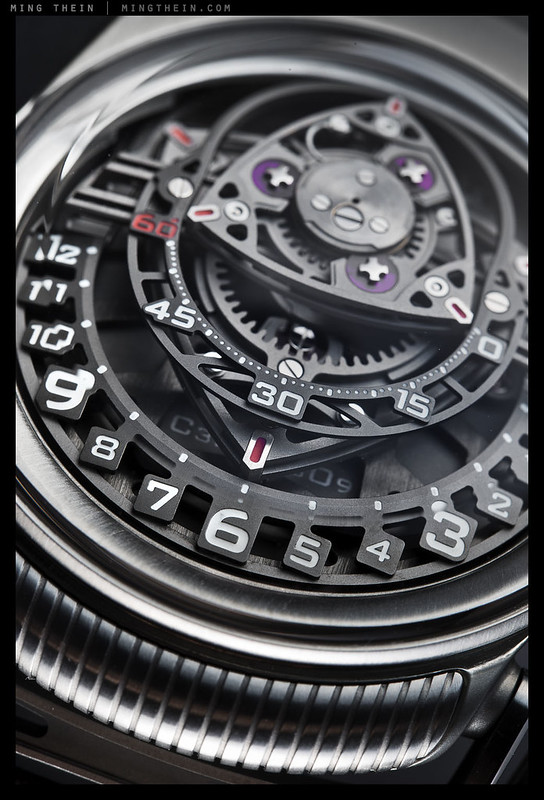 I believe these are the first photos outside the official press release, and I was told that the watch is a working production prototype – which means non-final parts and finishing, and some potential tool marks in places as befits an engineering experiment…MT

Many thanks to Ian Skellern at C3H5N3O9.

This series shot (hastily) with a Nikon D800E and AFS 60/2.8 G Micro. It wasn’t a commercial shoot, so please excuse me if I missed a spot or two. All images can be clicked on for larger versions. 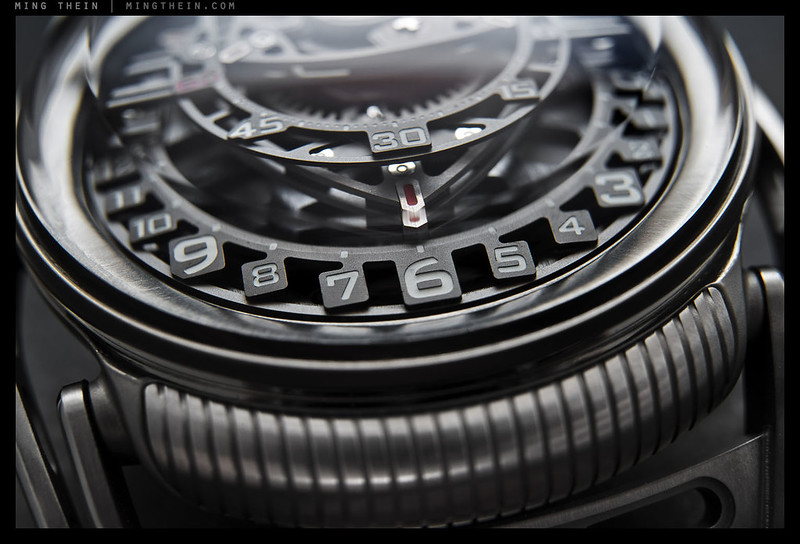 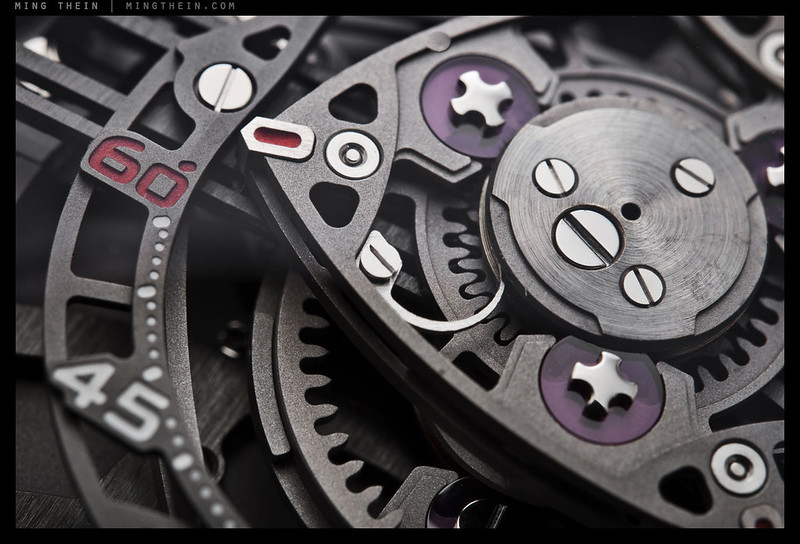 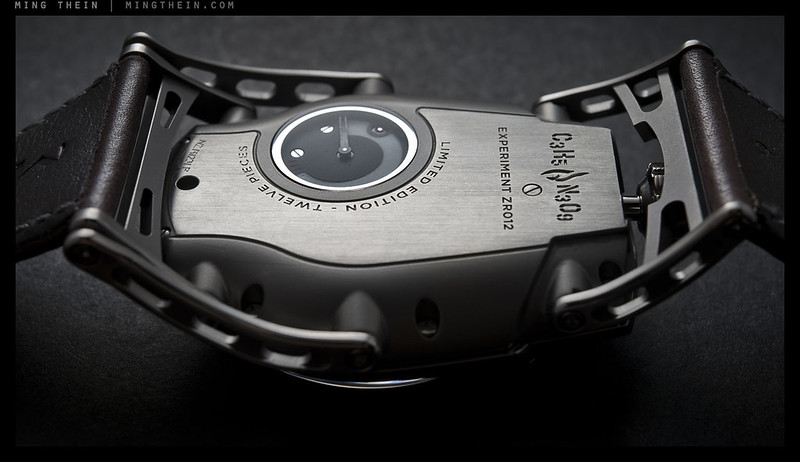 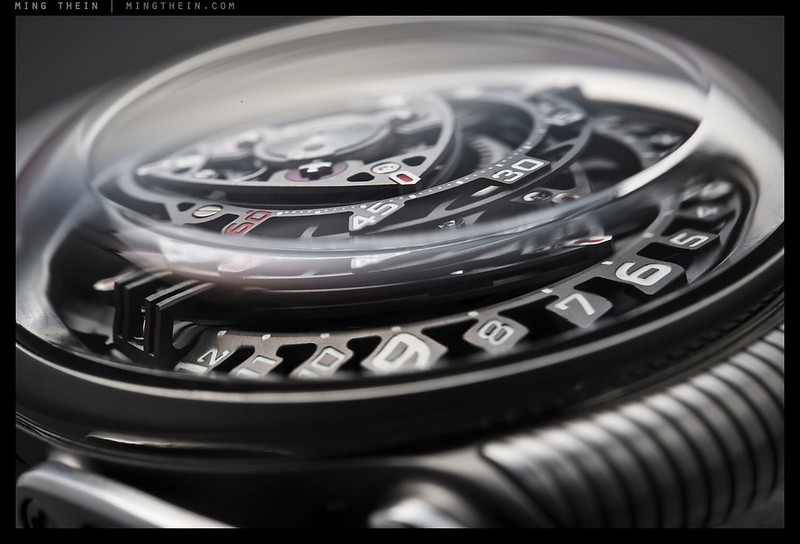 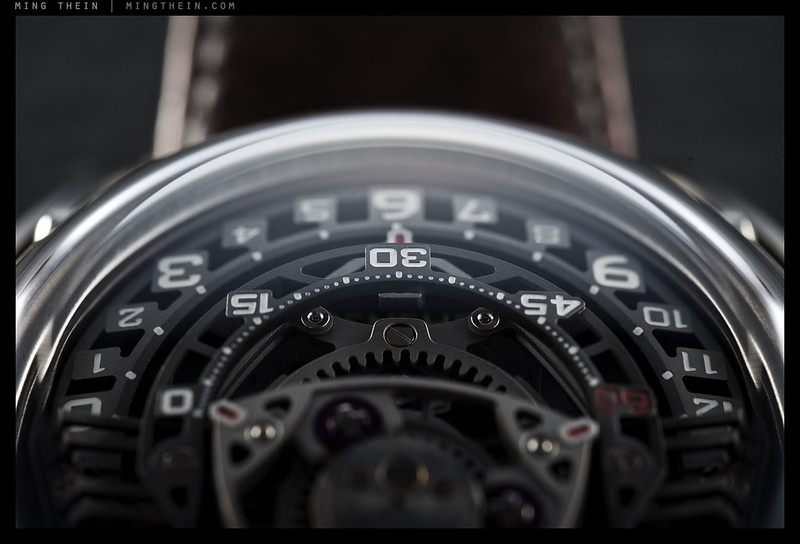 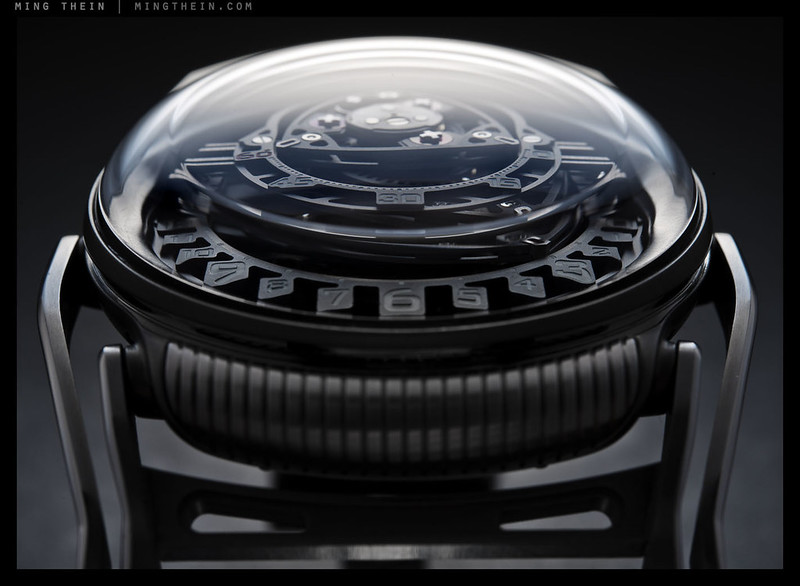 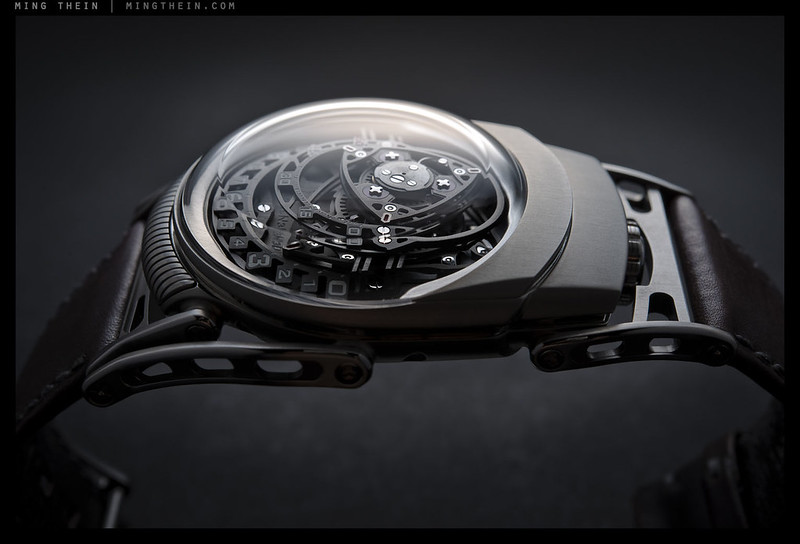 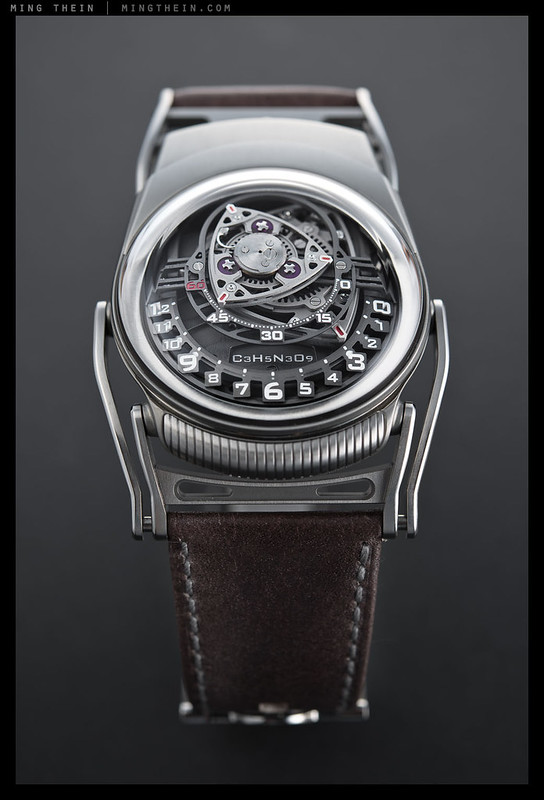 And finally, a wrist shot: 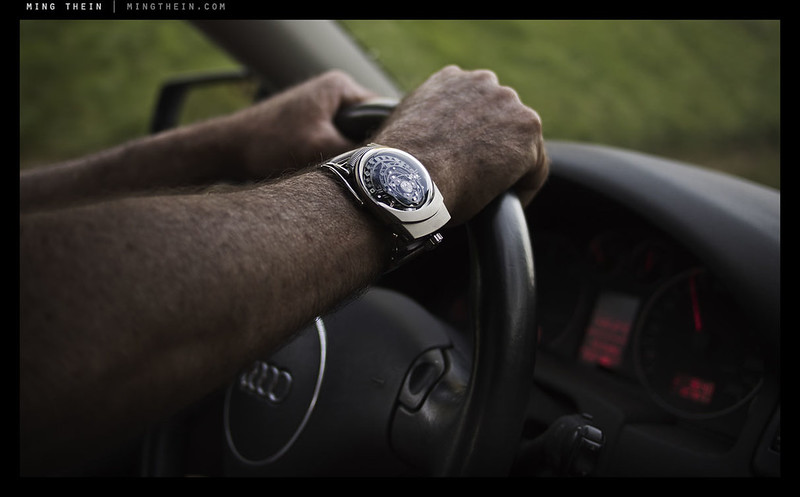 More information about this timepiece:  www.c3h5n3o9.com

Hot Topics
Everyone Needs At Least One Of These Iconic Dress Watches In Their Collection — Top Picks From Cartier, Rolex, Grand Seiko, And More
115 comments
The Omega × Swatch Speedmaster MoonSwatch Six Months On — Is The Hype Still Alive?
85 comments
Introducing: The New Omega Speedmaster X-33 Marstimer
80 comments
Not Every Watch Enthusiast Needs To Own A Rolex
70 comments
The Best Of The Bunch — Meet The New Omega Speedmaster ’57 In Blue
58 comments
Popular
Top 10 Rolex Watches – Overview of Models Favoured By Our Readers
Fratello
23
Rolex GMT-Master History And Overview Of All Major References
Robert-Jan Broer
18
An Overview Of All Omega Speedmaster Apollo XI Models
Robert-Jan Broer
17