Rob and Lex are lucky boys! Wrapping up what looked like an absolutely killer week at Geneva Watch Days, the two of them got a chance to visit F.P. Journe. There, the debonair duo got hands-on with four of the master’s greatest works. A tad more thrilling than my view from a cubicle at the public library, I’d imagine. Biblical levels of envy aside, it’s my pleasure to give you a quick look at the fruits of their adventure. The first timepiece on the docket is the Chronomètre Optimum.

This watch represents F.P. Journe’s quest for the ultimate in chronometric precision. While many brands are content to nab a chronometer certificate and call it good, Journe doesn’t take the “easy” way out. The movement inside the Chronomètre Optimum makes that strikingly clear. As the result of 11 years of development, the manually wound Calibre 1510 brings together a few key components to optimize energy delivery and reduce friction. This results in what Journe claims is “near-perfect accuracy.” 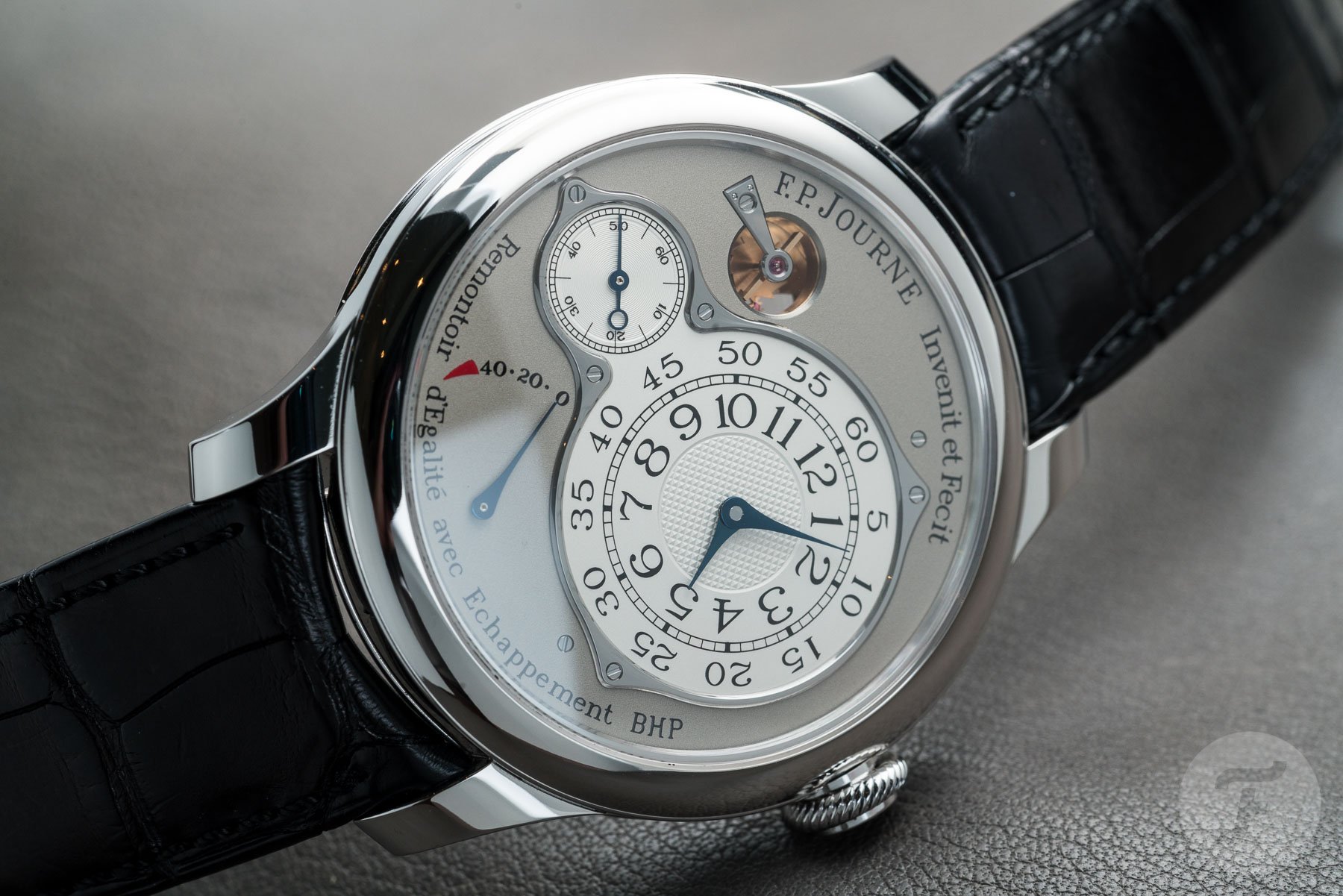 Calibre 1510 utilizes two mainspring barrels. With “just” 70 hours of power reserve, one would think a single barrel could have sufficed. The barrels, however, are placed parallel to each other, rather than in sequence. Because of this, they don’t serve to extend the power reserve at all. Rather, they specifically exist to provide more stable power delivery with less friction on the main gear.

It also provides a unique dead seconds display that runs in reverse on the back of the movement.

The movement also employs a constant force mechanism. Most watches on the market do not. Consequently, most watches suffer from excessive amplitude when fully wound, and insufficient amplitude as they wind down. This can cause erratic accuracy throughout the power reserve. Journe’s remontoire d’égalité, however, actuates once per second, delivering equal amplitude to the escapement for the first 45 hours of the power reserve. It also provides a unique dead seconds display that runs in reverse on the back of the movement. 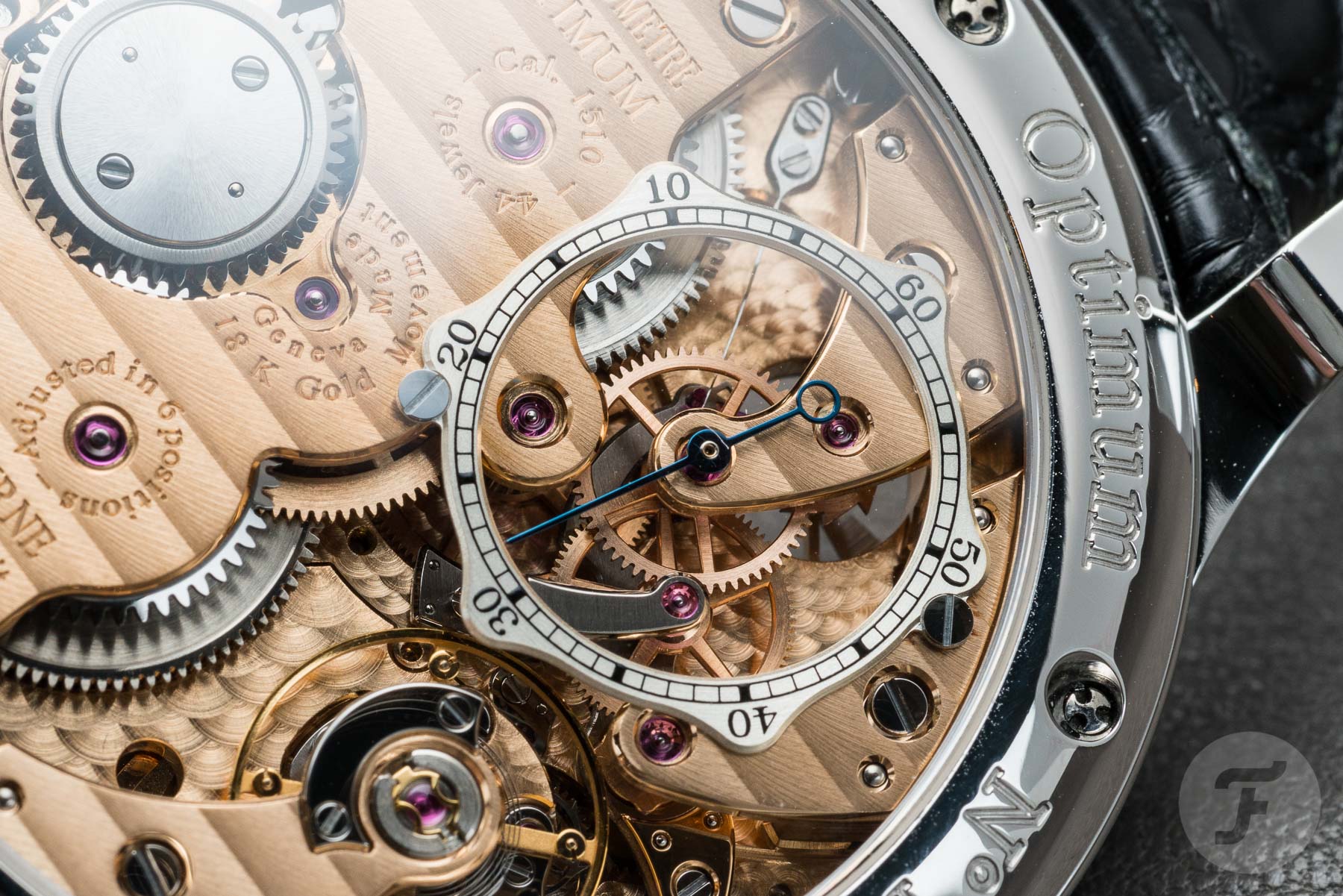 Journe’s patented EBHP escapement is also very efficient. In a nutshell, it uses two escape wheels rather than one for much less friction. Amazingly, despite its traditional metal construction, the creative design requires no lubricants. As traditional lubricants deteriorate, inaccuracies occur. While several brands now use unlubricated silicon components to get around this, Journe believes that silicon is fragile and lacks constructional longevity. Thus, his EBHP escapement is designed to optimize power delivery without relying on non-traditional materials. The movement is even adjusted in six positions, rather than the chronometer-standard five. This gives the watchmaker less license to relegate inaccuracies to an untested position (which is actually a common practice). 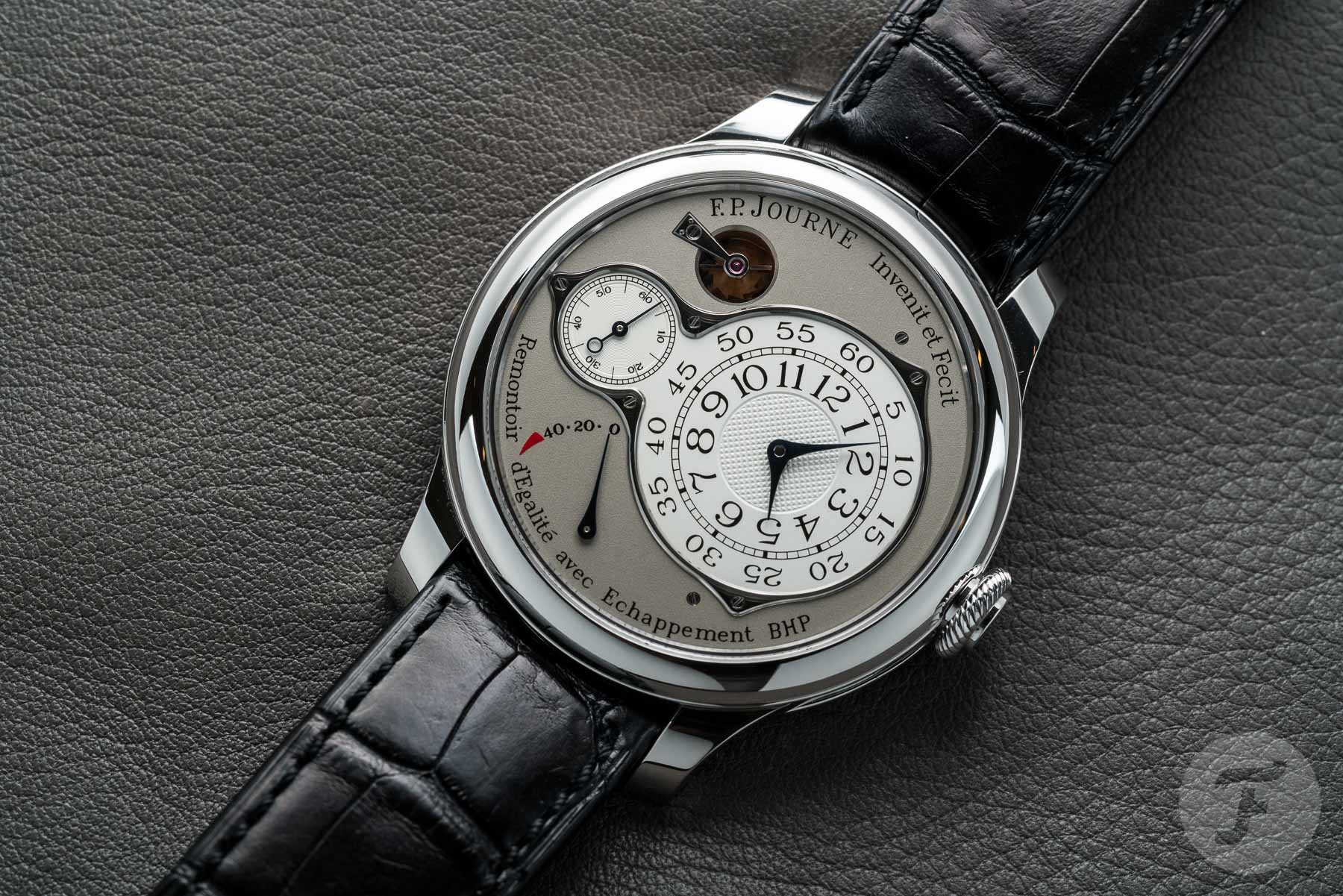 The Chronomètre Optimum comes in a 40mm or 42mm size. With lug-to-lug measurements of 48mm and 52mm respectively, I imagine the dramatically curved lug design lends itself to a snug fit. Both are quite slim as well, at 9.6mm and 10.1mm in thickness. Both also come in either platinum or 18k rose gold and on black alligator straps or five-link bracelets. 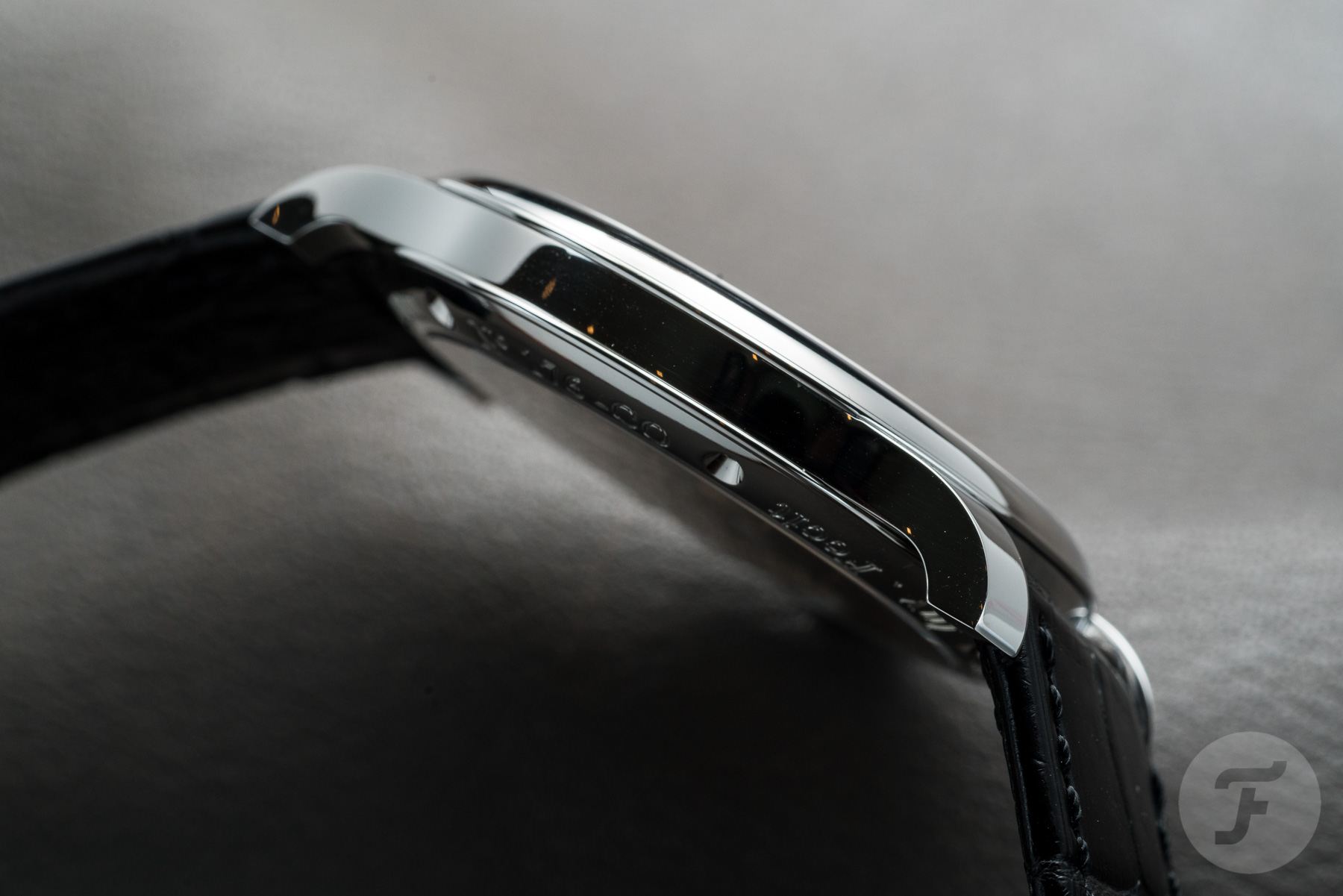 The base dials are white gold and rose gold respectively, with a large off-center display for hours and minutes and constant seconds sub-dial at nine o’clock. These displays are whitened silver with guilloché engraving on the main time display and black numerals. A highly polished steel frame is then bolted around the displays. The dial also features a power reserve indicator. Despite the 70-hour power reserve, the display indicates only the 45 hours in which the movement runs at constant amplitude. All hands are thermally blued. A cutout at 11 o’clock lets the wearer watch the remontoire in action.

Through the sapphire case back, you’ll see Calibre 1510. In addition to its solid rose gold construction, it features marvelous decoration with all the perlage, Geneva striping, and bevels you might expect. The reverse dead seconds complication is also a unique, hidden visual treat. 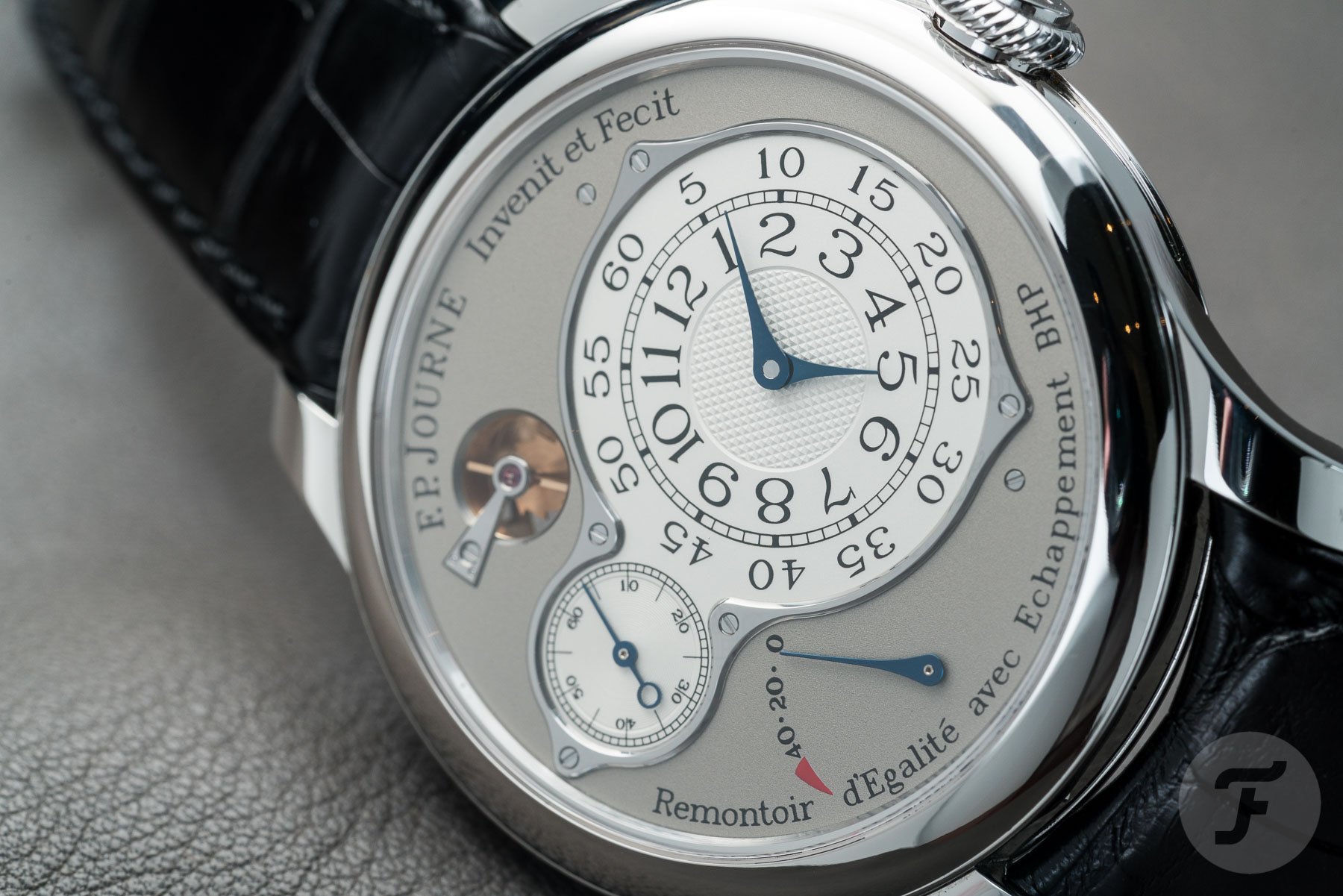 Attaining “near-perfect accuracy” in a mechanical watch is a tall order, but an undoubtedly virtuous quest. I’d be very interested to take the Chronomètre Optimum for an extended test drive to personally confirm Journe‘s claims (*wink wink*). Maybe one day! This particular watch will retail for €95,600 in platinum with the silver dial. Let us know what you think of this watch down below!