And the other half is in Geneva, just like Rob and Lex were a couple of weeks back. While they were there, they got to check out an enthusiast-favorite from the F.P. Journe collection, the Chronomètre Souverain with a Havana dial.

Before we explore this model, if you haven’t seen our other features on the F.P. Journe models they saw, I encourage you to do so (here and here). For those not-so-familiar with F.P. Journe’s work, these quick takes give a good overview of not only Journe’s aesthetic sense but also his horological motivations. Now, let’s take a look at the brown beauty before us! 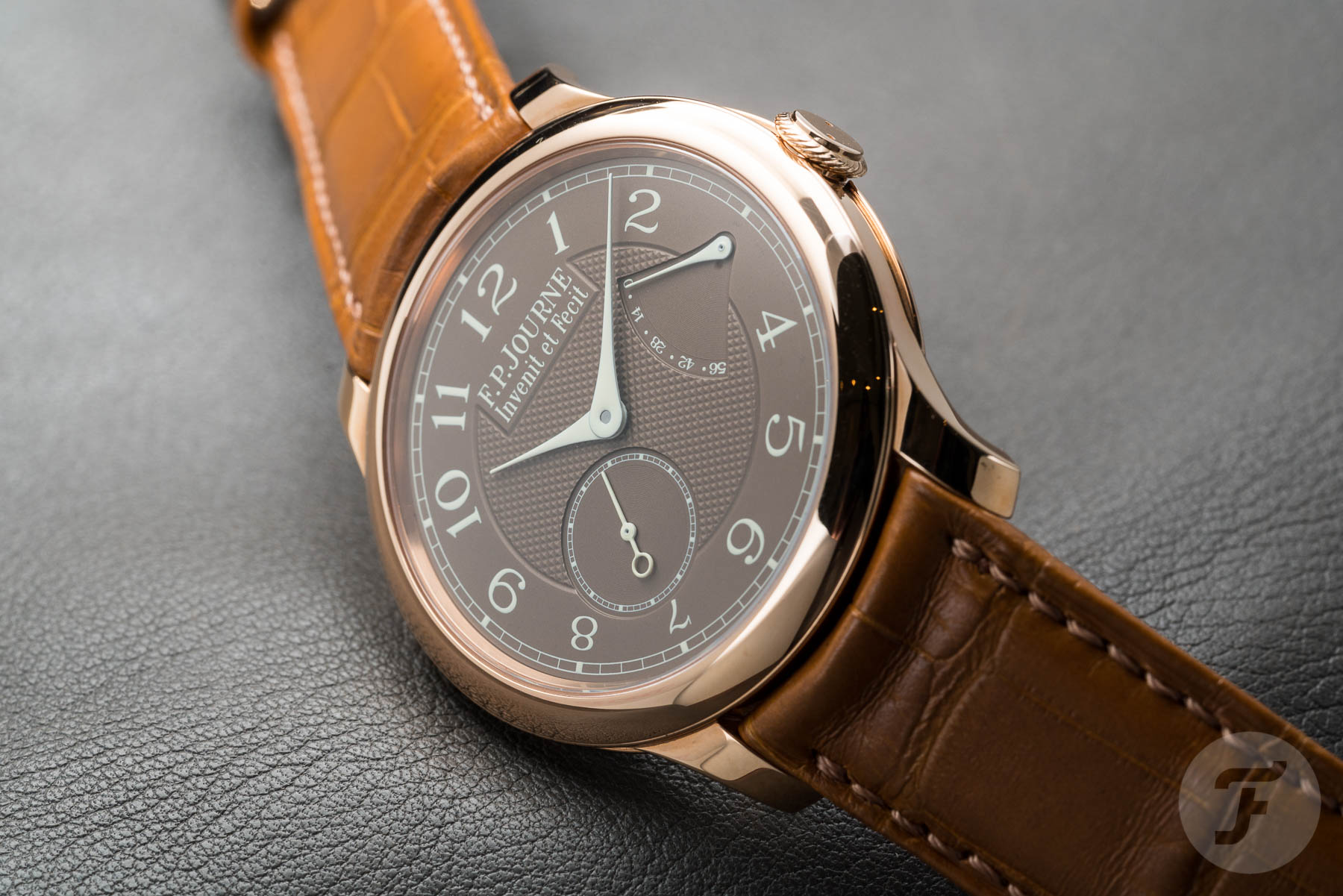 A warm, inviting take on an F.P. Journe staple

The standard, silver-dial Chronomètre Souverain debuted in 2005. Today, it remains the longest-running model in the current catalog. F.P. Journe started producing “Havana” dials in 2017. These are wildly popular among brand enthusiasts. Manufactured by F.P. Journe’s in-house (and awesomely named) dial manufacture Les Cadraniers de Genève (“The Dialers of Geneva”), it is made from a mixture of gold and ruthenium. 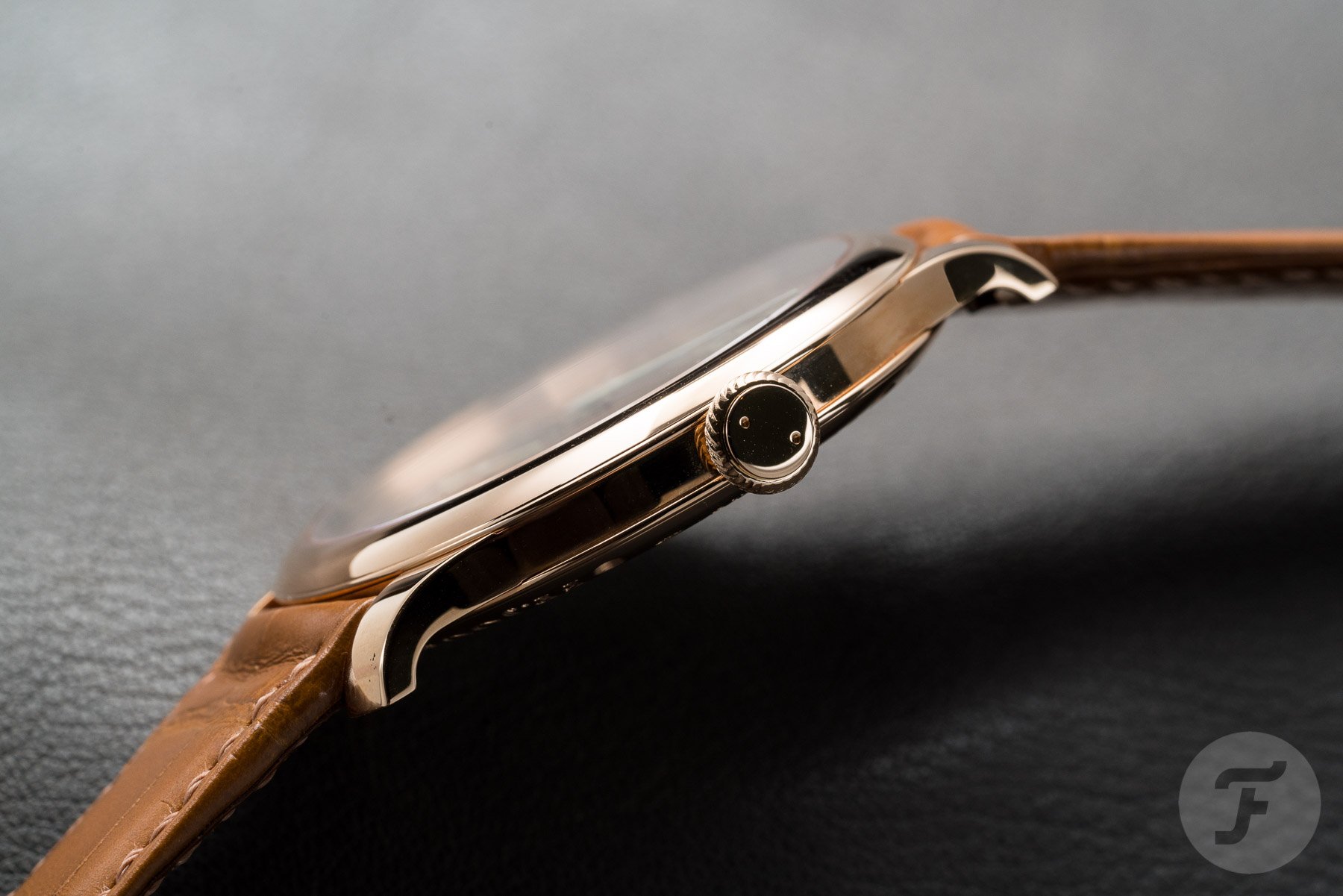 Since ruthenium, a member of the platinum family, generally has a gray hue, the specific formulation required to produce this brown tone took months to perfect. The result is a rich tobacco color reminiscent of the most opulent Cuban cigars. While a silver dial and blue hands will never go out of fashion, the combination can look a bit cold. The warmth of the Havana dial and off-white ivory hands, especially when combined with the rose gold case seen here, can really suck you in. 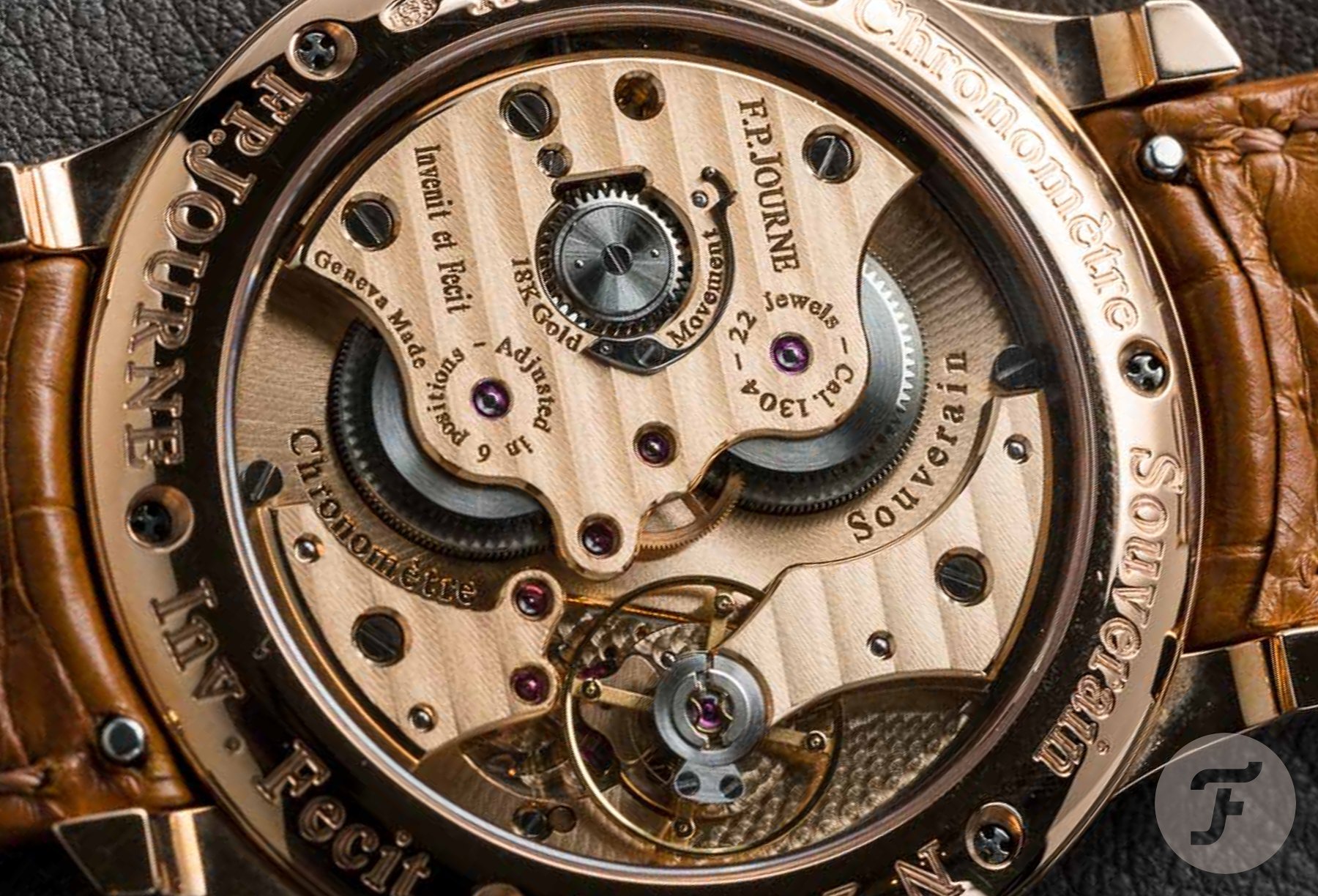 A stalwart of style

When it comes to F.P. Journe’s signature aesthetic elements, nearly all of them are present and accounted for. On the dial, the “Journe numerals,” railroad minute track, and Clous de Paris guilloche center provide positive familiarity. The small seconds hand, with its ring-shaped counterweight, carries over from all of F.P. Journe’s sub-seconds models. The minute, hour, and power-reserve hands all have the Journe-exclusive teardrop shape. The power-reserve indicator itself even echoes the teardrop motif. 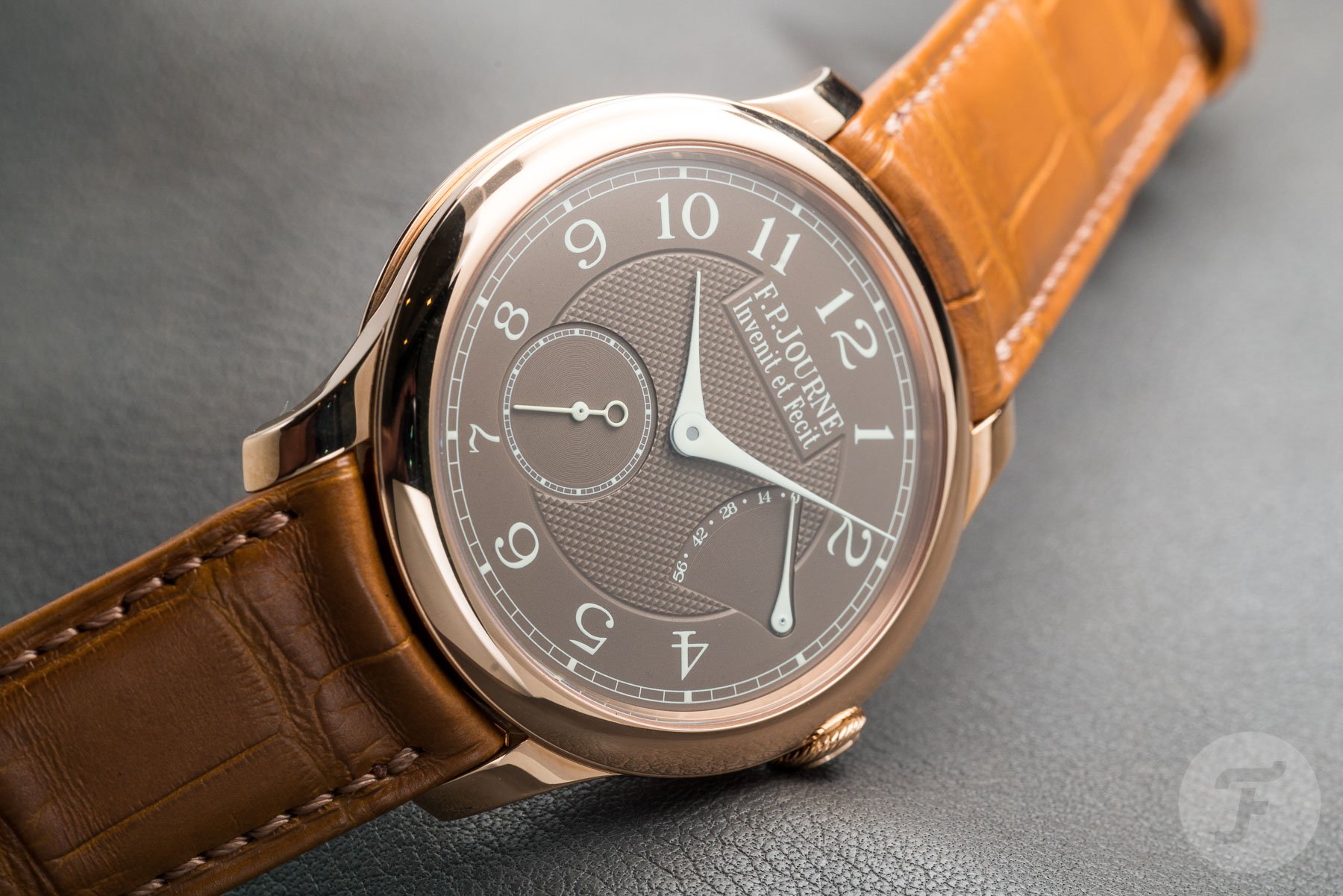 Speaking of motifs, you’ll see an ever-present one in the crown with its “silk rope” knurling. The case comes in either platinum or rose gold, measuring 40mm in diameter and 48mm lug-to-lug. It features the same domed bezel, recessed case middle, and dramatically curved lugs as the Automatique Lune and Chronomètre Optimum we looked at. At this point, it’s obvious: F.P. Journe’s design language is absolutely nothing if not consistent. 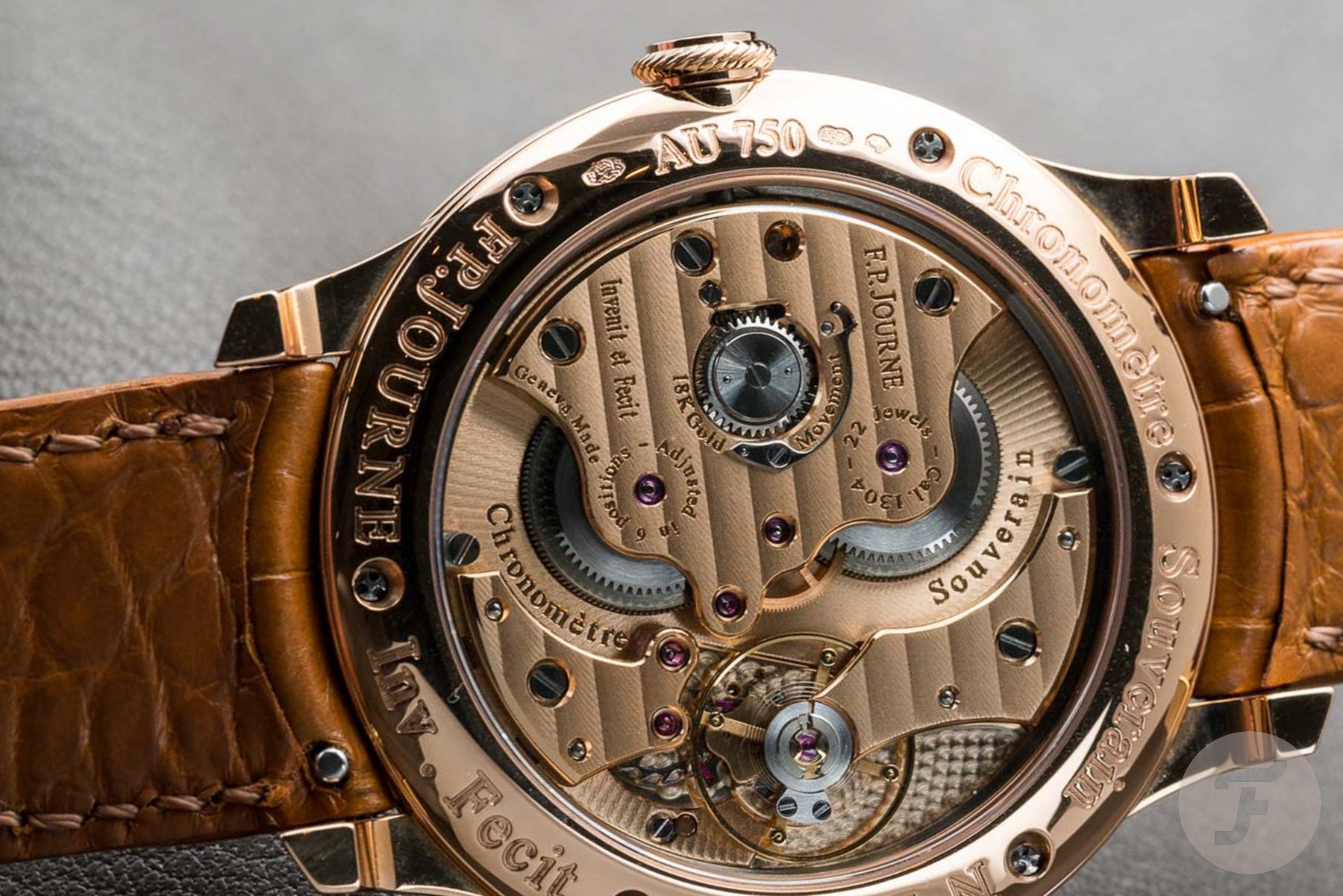 Where the case sets itself apart from its stablemates, however, is in its height. At just 8.6mm tall, it is elegant and svelte, especially considering its diameter and power-reserve indicator at three o’clock. 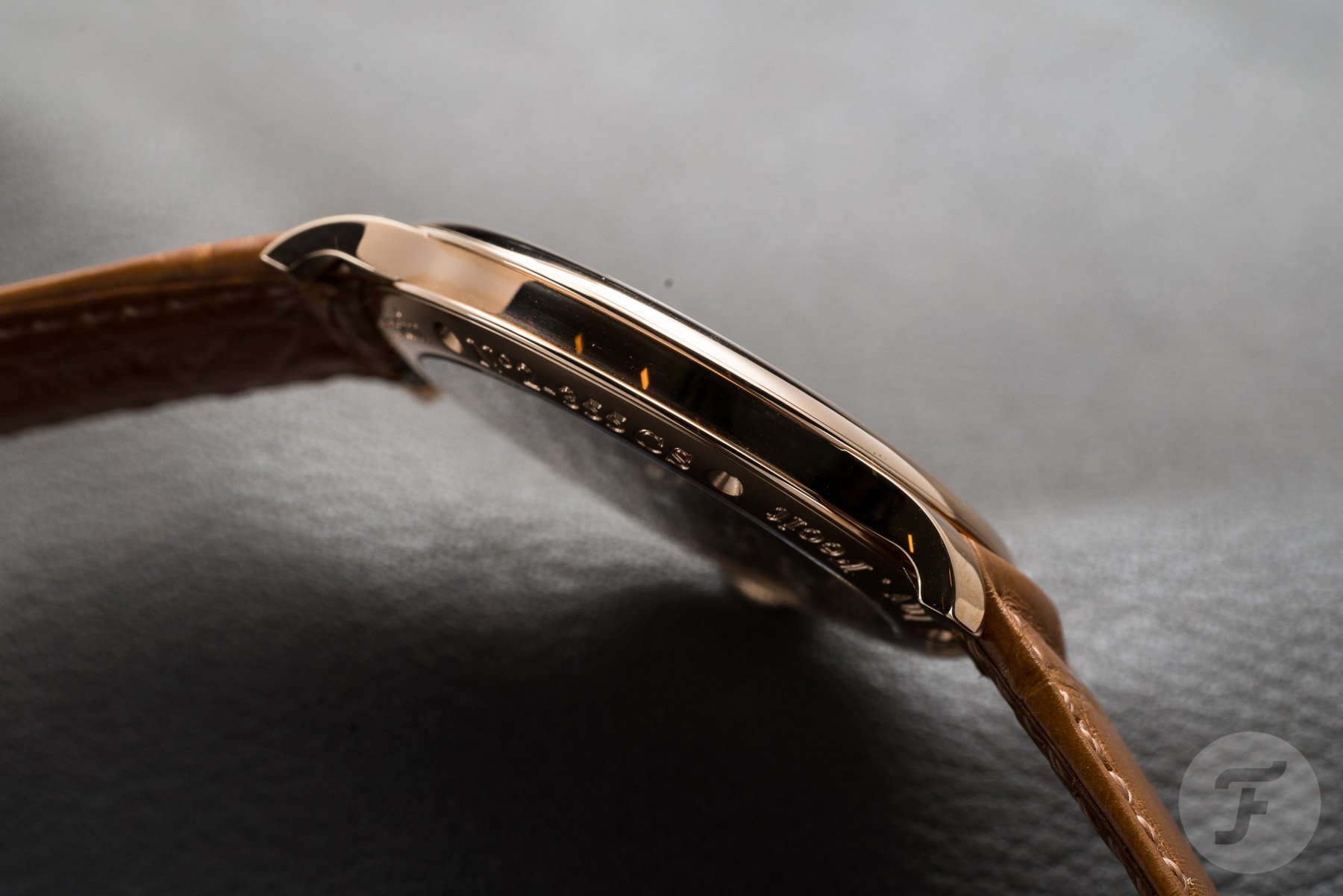 Why the manually wound F.P. Journe Caliber 1304 is special

Though it may not look significant, locating the power-reserve indicator at three o’clock was a conscious, technically challenging decision. To F.P. Journe, its placement made absolute sense. After all, you wind the watch with the crown. Why not place them close together? But if you think about it, very rarely does one see a power-reserve indicator in this position. Why? Because having the mechanism above the crown wheel makes the movement significantly thicker! 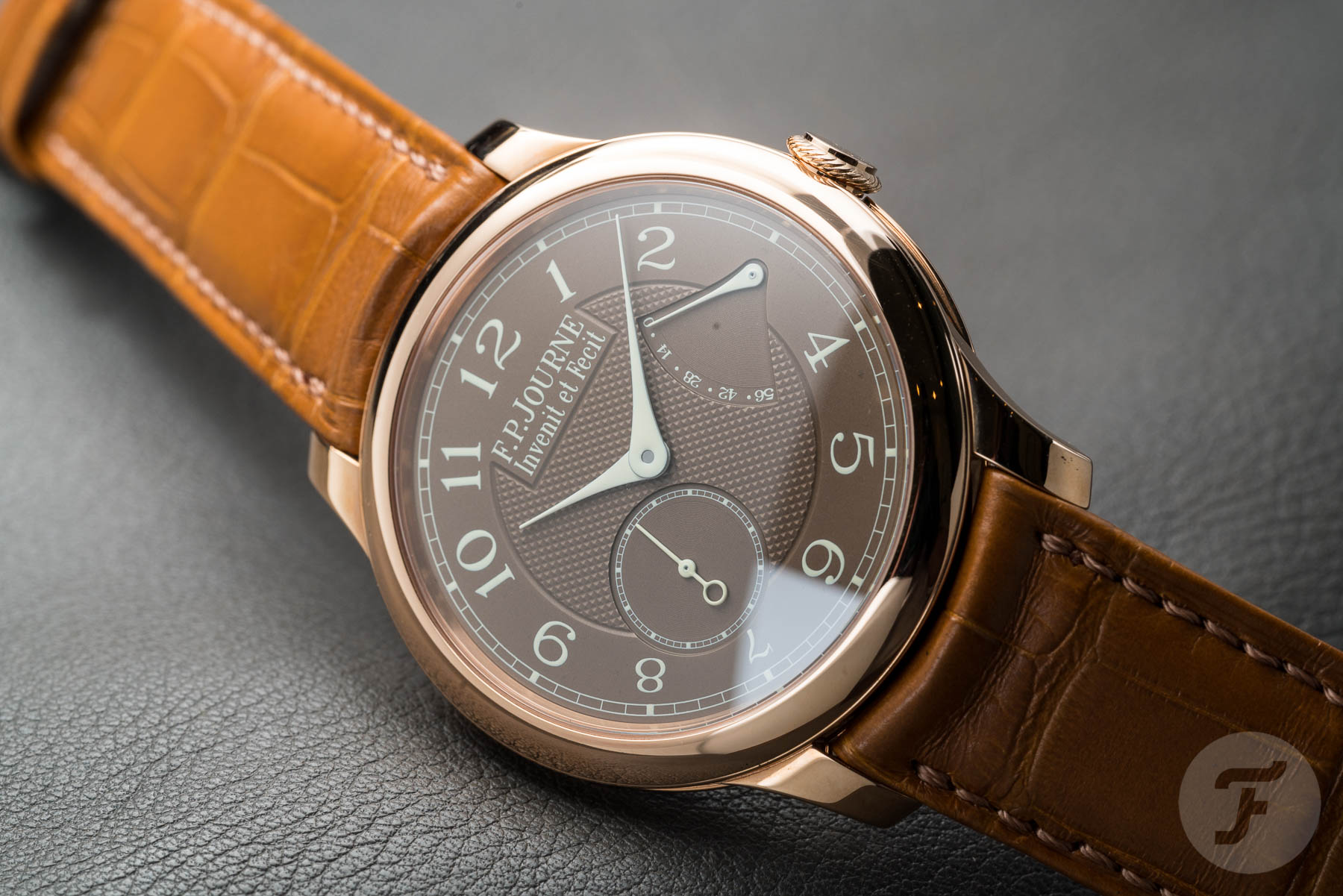 This caliber, however, remains a reasonable 4mm thin. To achieve this, Journe used tiny ceramic ball bearings to shave 1.02mm off the power-reserve mechanism, making it just 0.5mm thick. Dang, you go, François! To set it apart even further, the power-reserve has a “backwards” indicator. Rather than counting the hours remaining in the mainspring, it counts the hours since winding the watch. This style comes from historical marine chronometers. Their precision depended heavily on maintaining an optimal power-reserve, and they were always rewound at a pre-determined interval. 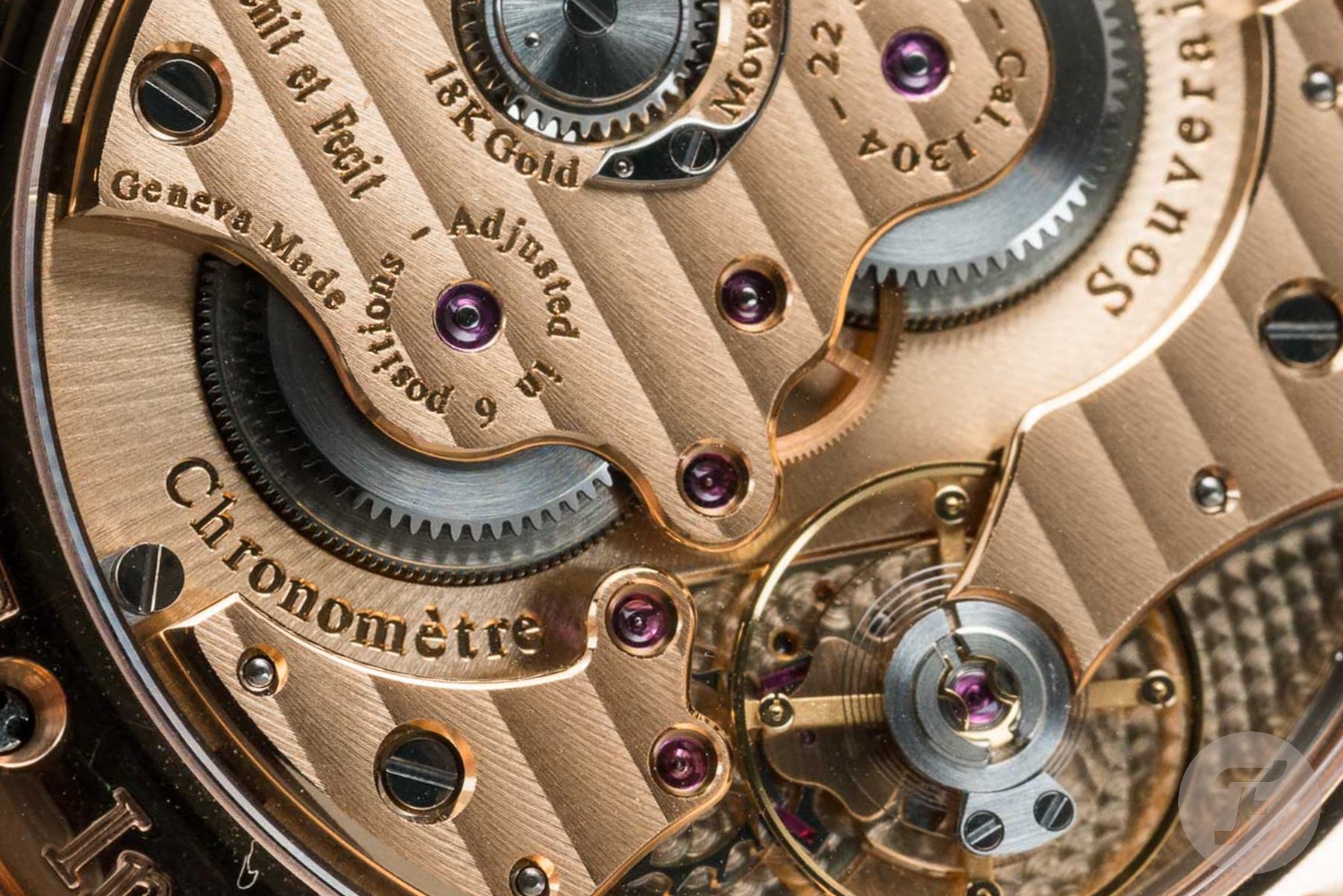 A poster boy of precision

Rather than in-sequence mainspring barrels, which provide a longer power reserve, Caliber 1304 features parallel double barrels. These provide a stable, consistent amplitude to the escapement throughout the 56-hour power reserve, keeping the watch as accurate as possible. Like most F.P. Journe movements, Caliber 1304 features solid 18k rose gold construction, a 21,600vph frequency, a free-sprung, variable-inertia balance for precision and shock resistance, and perlage, anglage, and Côte de Gèneve finishing. A unique hidden gear train visually separates the dual barrels from the escapement. This gives the caliber an intriguing, mysterious appearance to those who know what to look for. 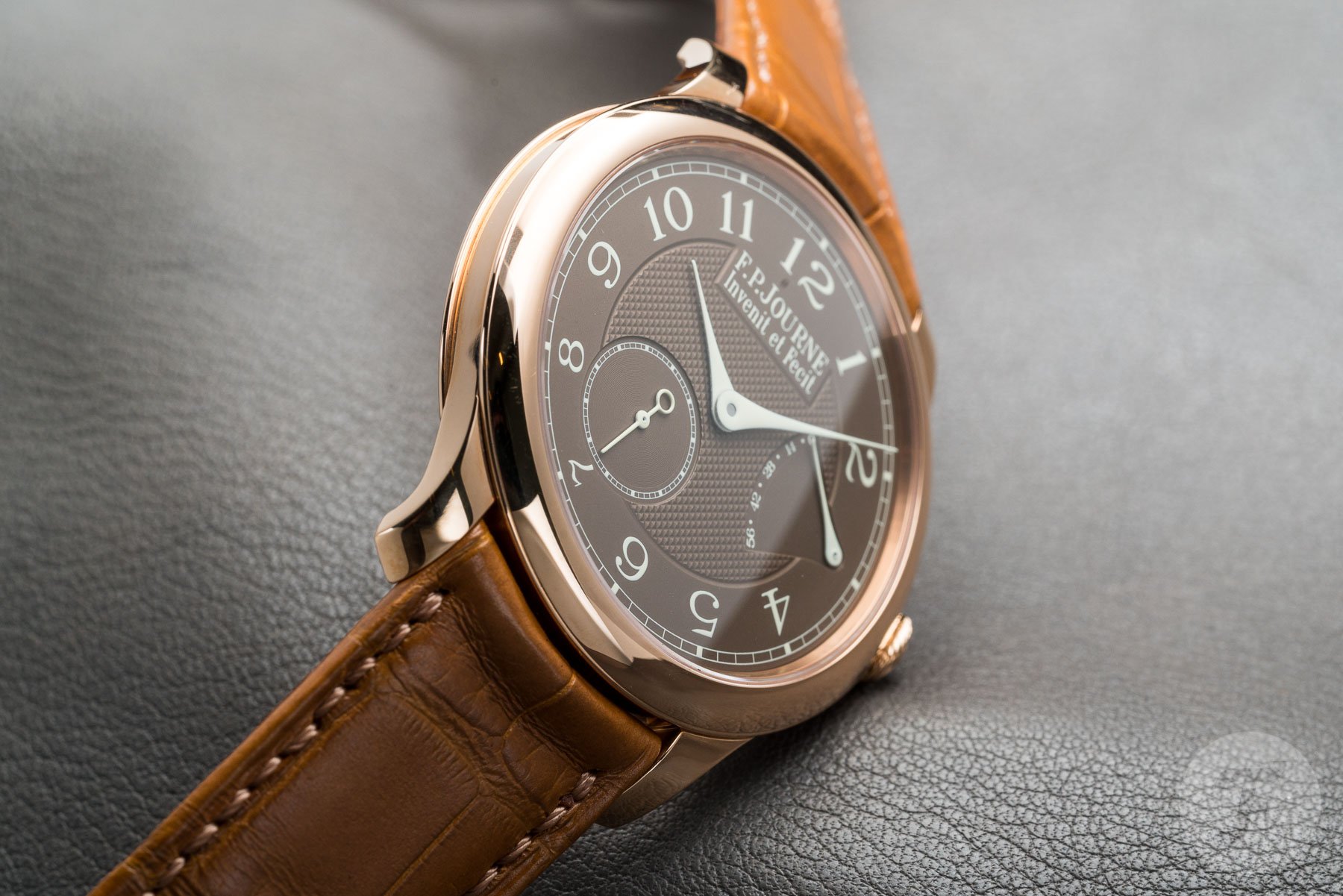 To me, the Chronomètre Souverain represents F.P. Journe’s dedication to chronometric excellence. Though his much-newer Chronomètre Optimum takes this ideal even further, the Chronomètre Souverain has an even greater balance of “complex simplicity” and brims with horological foresight. Combined with its true-to-brand aesthetics and arguably perfect dimensions, I feel the Chronomètre Souverain is undoubtedly deserving of its staple status in the brand’s collection. In addition, readers familiar with my work will likely know that I adore interesting dial colors. As such, for me, the Havana dial is simply the luscious icing on the cake.

I sincerely hope you’ve enjoyed our looks at some of F.P. Journe’s finest. Which one was your favorite? Additionally, what do you think of the Chronomètre Souverain Havana? Let us know down below!