The classics... But do you agree?
Nina Scally
comments 28
Share

The Octo Finissimo, Royal Oak, and Nautilus have made it onto my list of five of the best steel sports watches of all time. Would they make it onto yours?

If you’ve experienced any measure of success in life, you’re bound to have considered owning a luxury sports watch as a means of commemorating those achievements. Reaching such a milestone in the first place, however, takes considerable perseverance, determination, and, of course, a fraction of knowledge about the luxury watch industry itself. Which steel sports watch appeals to you the most?

How much should the heritage of a brand influence the direction your heart wants to follow when choosing one? The answer to those questions may be influenced by how much money you can bear to part with and whether you consider patience to be one of your strongest qualities or not. Some steel sports watches, specifically those that come with excruciating waiting lists, not to mention a price tag likely to result in divorce papers, are rightfully some of the most coveted and hugely sought-after on the current market. 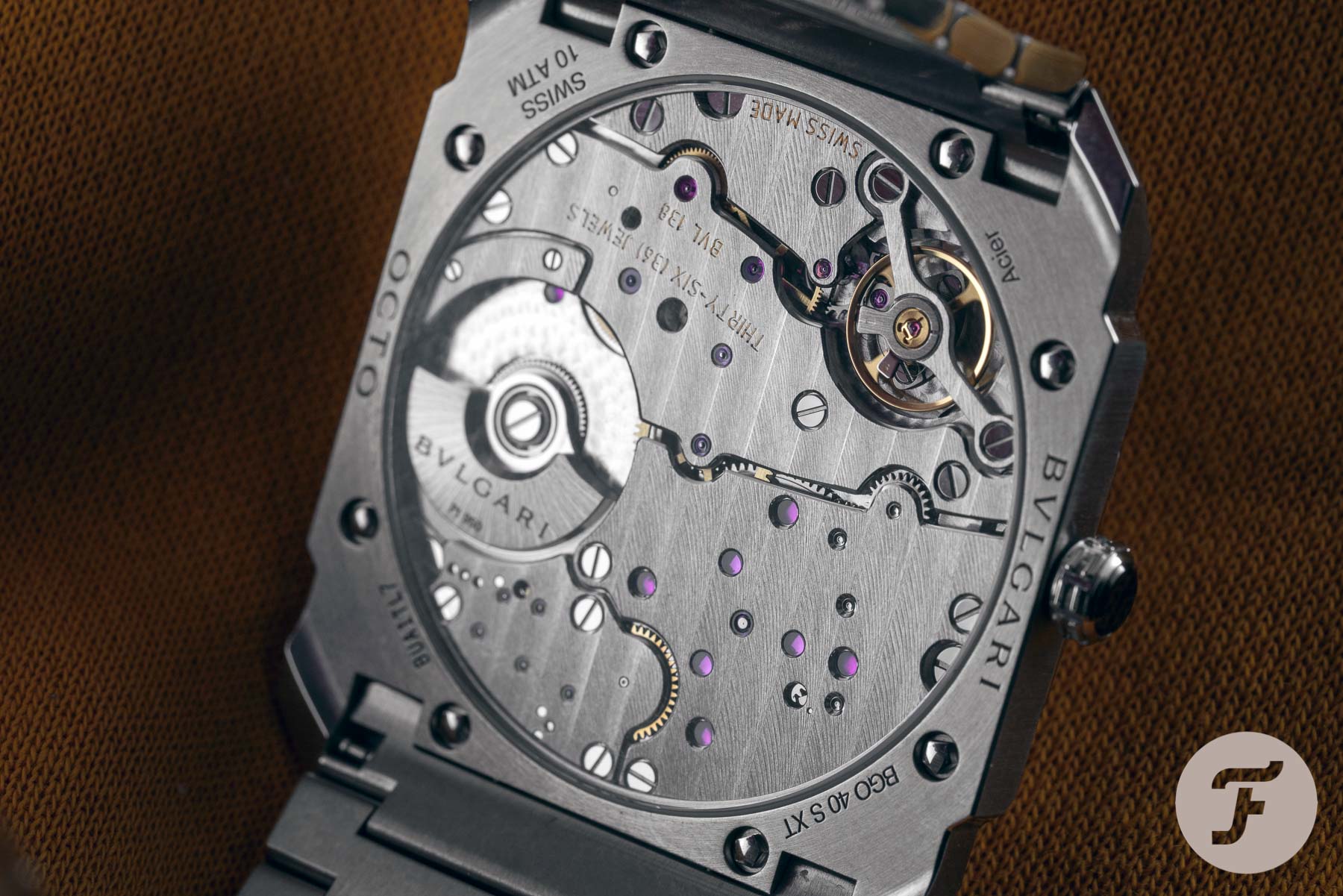 Although the ebb and flow of trends within the fashion industry can fluctuate over time, what does seem to remain a very solid and definite thing is the desire for a robust steel sports watch. Even the most devoted luxury watch enthusiasts would agree. Elite watch collecting circles have remained steadfast in their preference for a steel sports watch leveraged by brand provenance and strengthened by reputation. After some great deliberation, I’ve whittled my list down to five worthy contenders.

…the greatest of all time.

If steel sports watches are your bag, you’ll more than likely want to challenge my choice and you’d be welcome to because no “top 5 list” can ever claim to be final. So, we want your opinion. We want to know which one you’d switch out for another favorite. Call me out in the comments below, just don’t hunt me down. If there’s one thing I’ve come to understand when discussing luxury sports watches, it’s that almost every watch enthusiast is going to have an opinion on the topic. But we do love a good debate here at Fratello, and I’d certainly like to know which sports watch you’d crown as the greatest of all time. 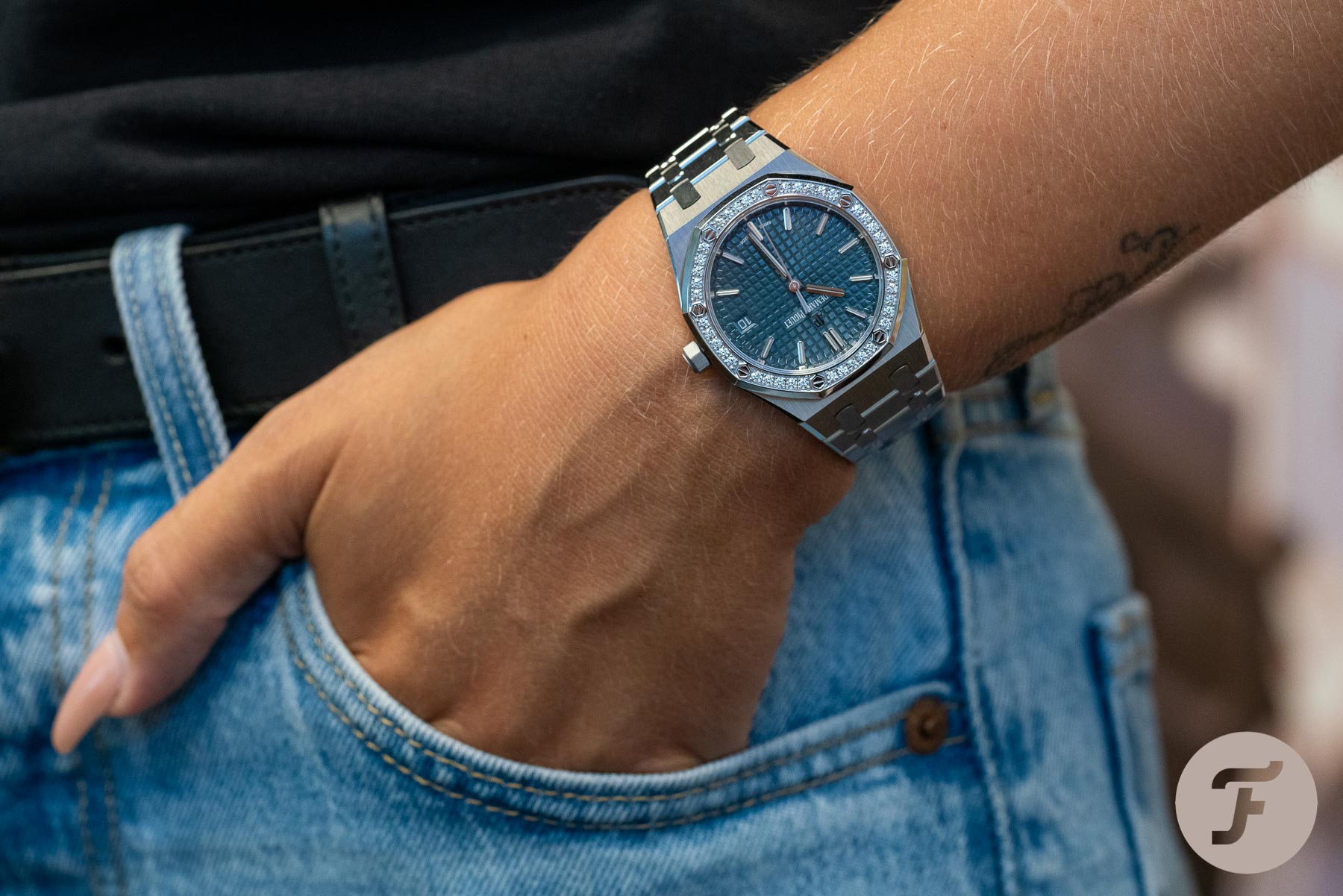 For many, the Audemars Piguet Royal Oak could be considered the mother of all luxury sports watches and there’s a good reason as to why. Turning a fair few heads when it debuted in 1972, this revolutionary design was the work of one very talented designer who went by the name of Gerald Genta. One could argue that any self-confessed sports watch aficionado should instantly be able to recall the name of this legendary man. Genta designed the Royal Oak in just one night, presenting it to the Le Brassus-born watchmaker back in 1970. Although not always a predominant feature of a luxury sports watch these days, Gerald Genta’s vision of an ultra-slim watch in steel back then created a ripple effect across oceans, and before long every manufacture seemed to turn green with envy. 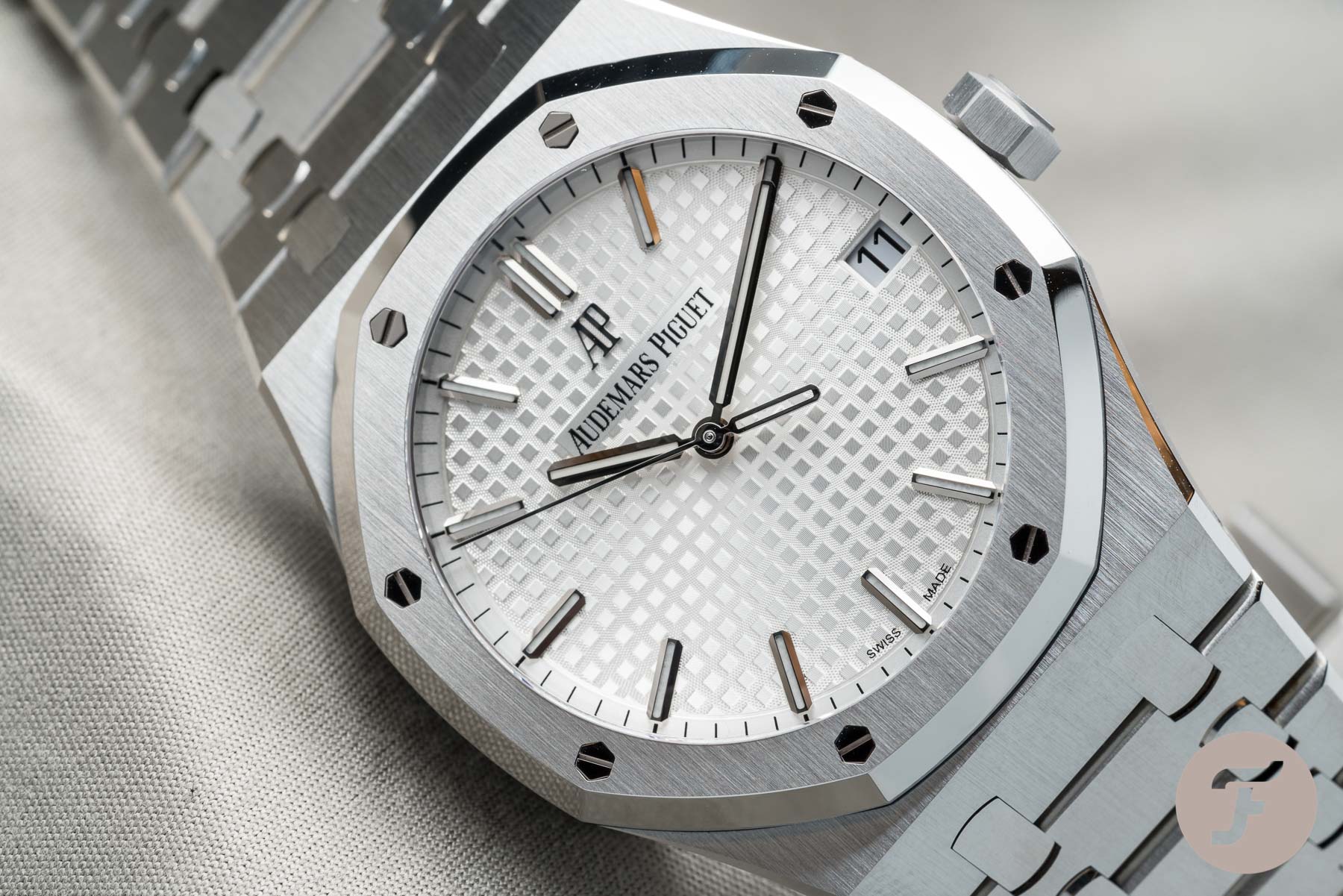 Aside from its thinness (thanks to an equally thin mechanical movement), the Royal Oak watch featured an octagonal bezel mounted to a tonneau-shaped steel case, a hand guilloche dial, and an integrated bracelet. Simple upon first glance? Maybe. But Audemars Piguet took this sports watch and knocked it out of the park during the 1970s. There it stayed. And even today the Royal Oak remains one of the world’s most instantly recognizable designs. Many a rival watchmaker has tried to echo it. None will actually succeed. 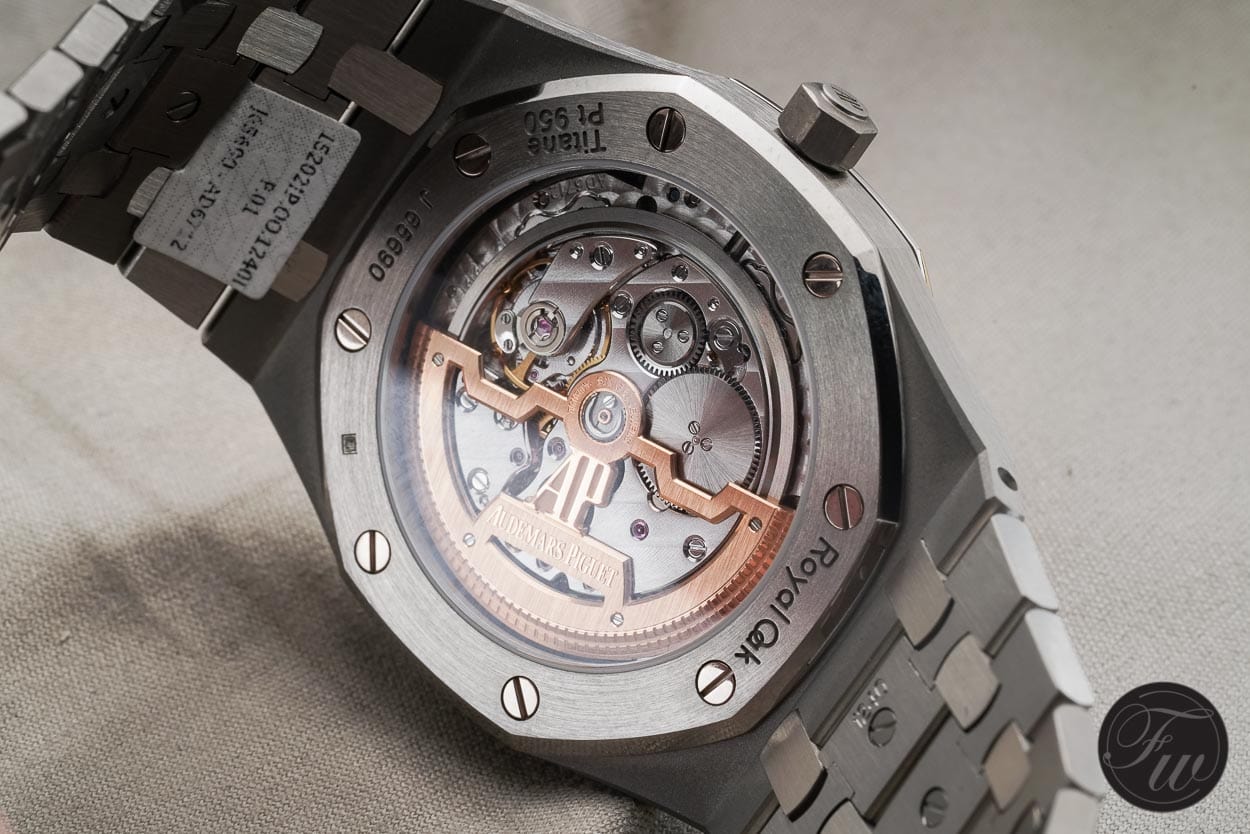 Claiming victory over the world’s first luxury stainless steel watch, the Audemars Piguet Royal Oak has acquired a cult-like following, with offspring now made in materials such as platinum and gold. Extensions of the “Jumbo” nicknamed watch now include Grande Complication versions like the perpetual calendar and minute repeater. The Audemars Piguet “Jumbo” Extra-Thin watch ref: 15202ST, however, is a direct descendant of the original model launched in 1972 and thus gets my vote for its enduring design. 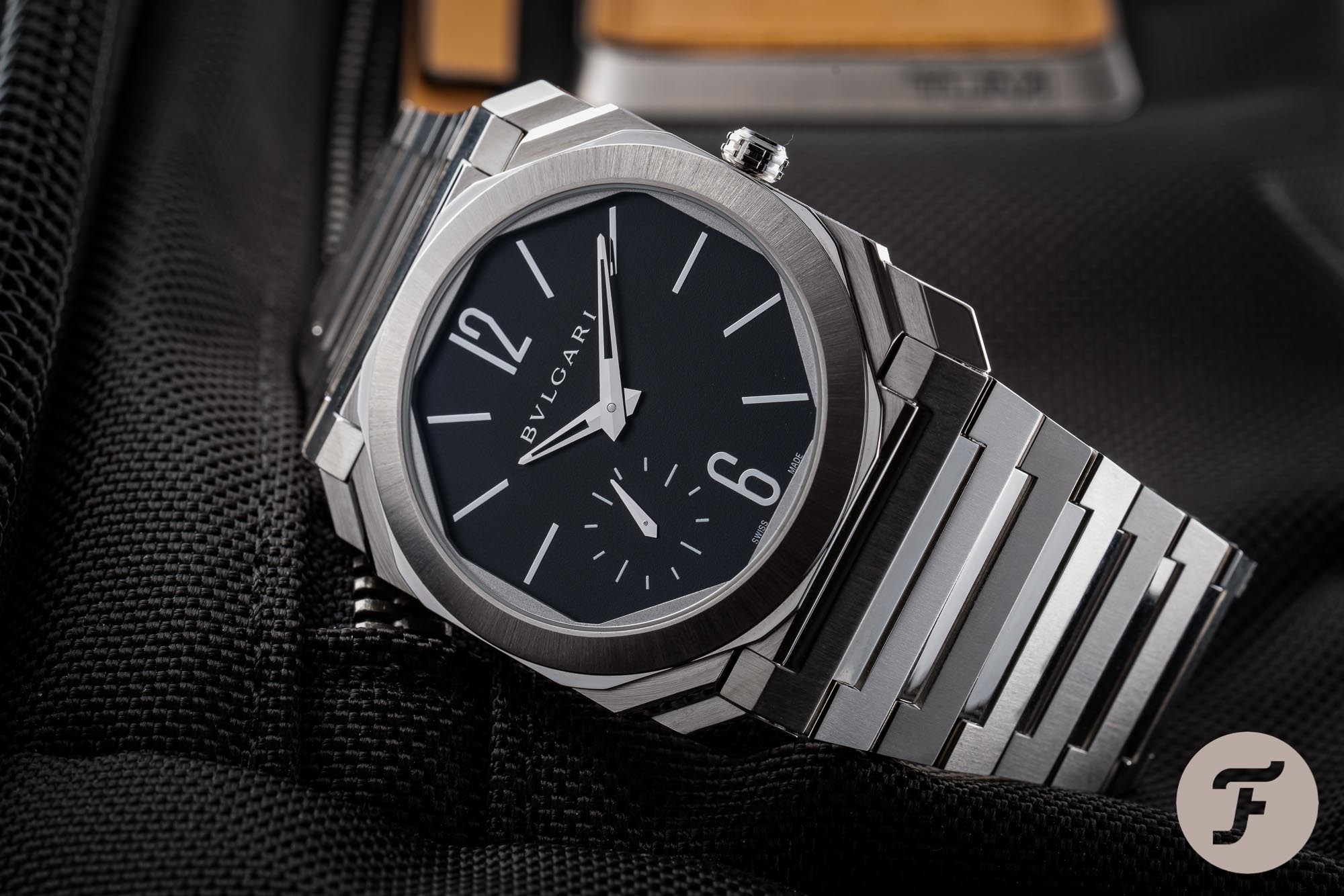 How can a relatively young timepiece make it to a list of all-time greatest steel sports watches? Like this…

The Octo watch from Bvlgari has only been roaming the earth on people’s wrists for a mere 10 years, yet its success was ramped up a notch with the release of the award-winning Octo Finissimo Automatic in 2017. Interestingly, here’s where Gerald Genta stars again. Bvlgari acquired the Gerald Genta brand in 2000, celebrating the designer’s inestimable flair for creating genre-defining sport-chic wristwatches. Despite a resolutely thin case, the Octo Finisssimo Automatic ref: 103011 BGO40C14SSXTAUTO manages to pack in a ground-breaking movement, developed in the very same year. The movement is knife-slim, measuring just 2.23mm in thickness. Matching, if not superseding the performance of the AP 2121 Calibre, it provides a 60-hour power reserve once fully wound and features a small second function, located in the sub-dial at between 7 and 8 o’clock. 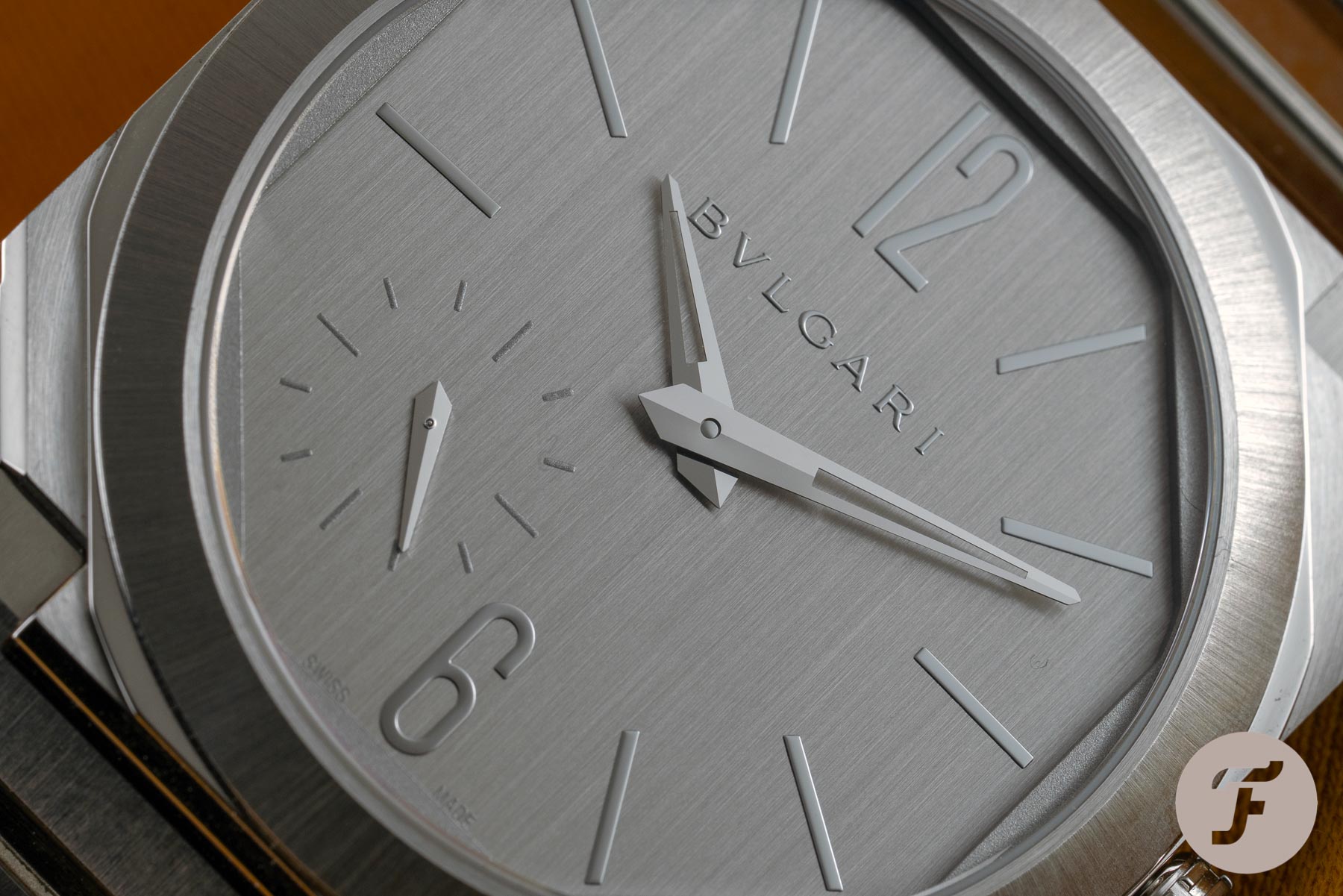 At the time of its release, the Octo Finissimo was the thinnest automatic steel sports watch on the market, placing itself before the ultra-thin master, Piaget. The Octo Finissimo debuted in titanium but was soon clad in a rugged stainless steel outfit, executed in a sandblasted finish that is hard to take your eyes off. Under the hood, that BVL138 movement features a platinum micro-rotor coupled with traditional circular graining and Geneva stripes decoration. On the outside, the integrated bracelet and octagonal silhouette are characteristics that have won the hearts of many. Maybe yours included? 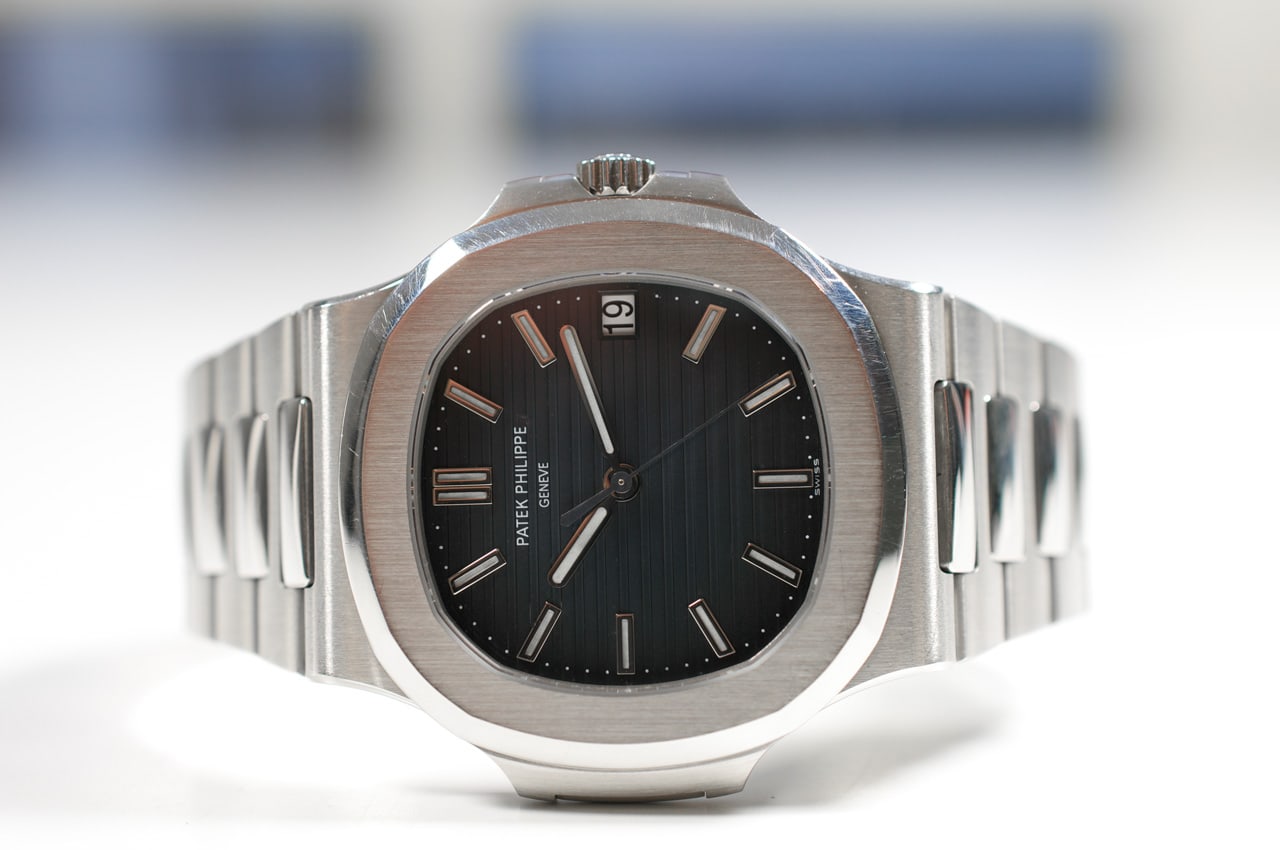 If you were a watch manufacturer during the 1970s, developing a mechanical watch entailed great risk. Many brands succumbed to the crushing effect of the quartz crisis, but not Patek Philippe. Released in 1976, the Nautilus was a bold kick in the teeth to the forces against it during this era and was designed by no other than Gerald Genta. Its case imparted a slightly softer octagonal shape than his former Royal Oak design. Instead, it took inspiration from a transatlantic liner’s porthole as a reference to Philippe Stern’s love of sailing. To craft the case of the Patek Philippe Nautilus, a special alloy was chosen. Nickel-chrome-molybdenum steel was light but strong and used for war tanks, mainly for its ability to withstand pressure and contrasts in temperature. 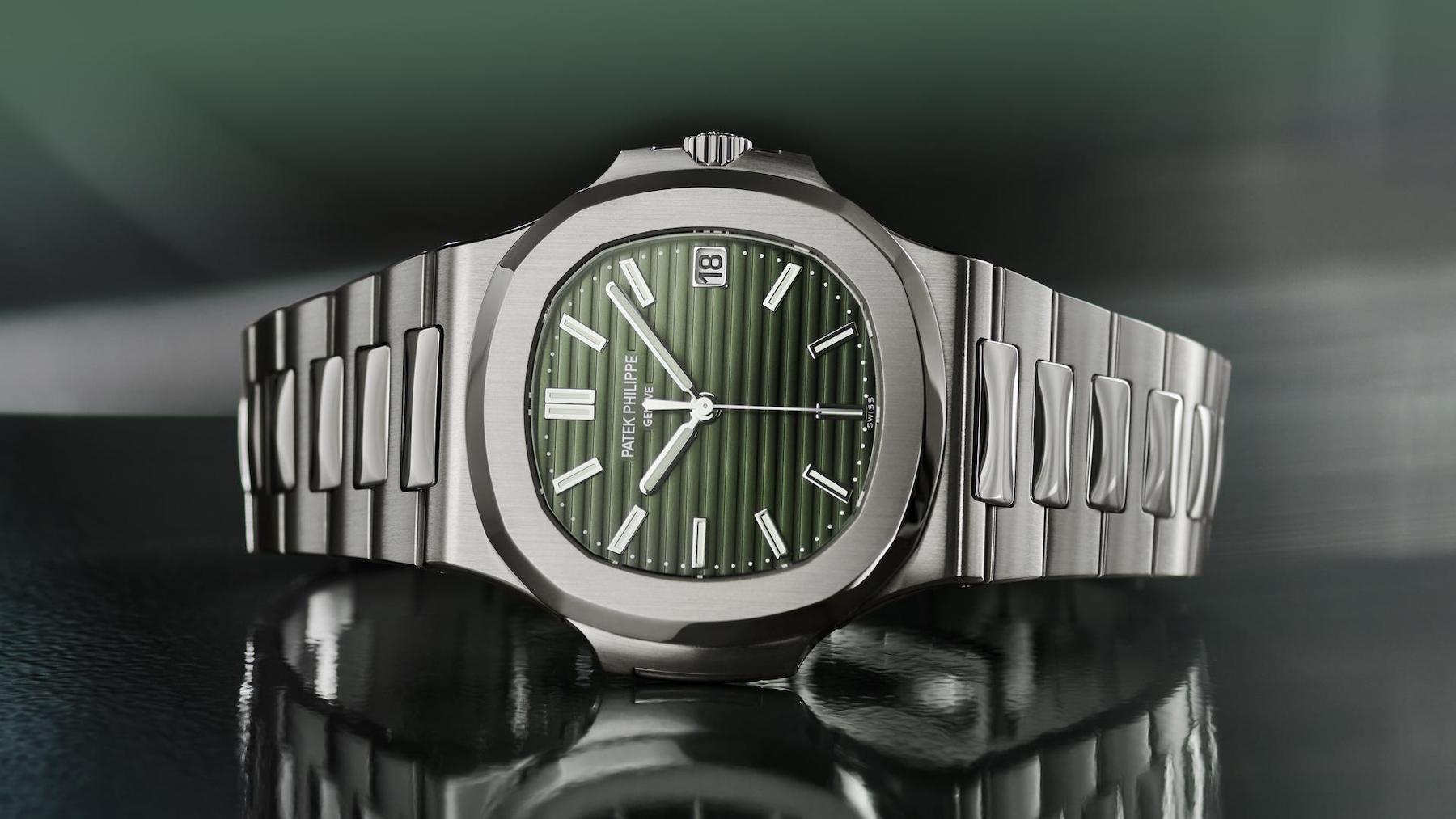 Introduced in 2006, the Nautilus 5711 has proven to be one of the most desirable of all, so of course, the devastating news that the model would be discontinued earlier this year sent devoted collectors into turmoil. Nevertheless, Patek Philippe pushed out a replacement of the 5711 not long after — a striking olive green dial variant. From the outset, the steel bracelet of the Patek Philippe Nautilus has remained an integral part of its design, while its horizontally-grooved dial has previously been showcased in nautical dark blue, classic black, and an indulgent anthracite color to name just three examples. Will the new olive green version of the 5711 ever match up to the beauty of its ancestor, though? You’d have to tell us. 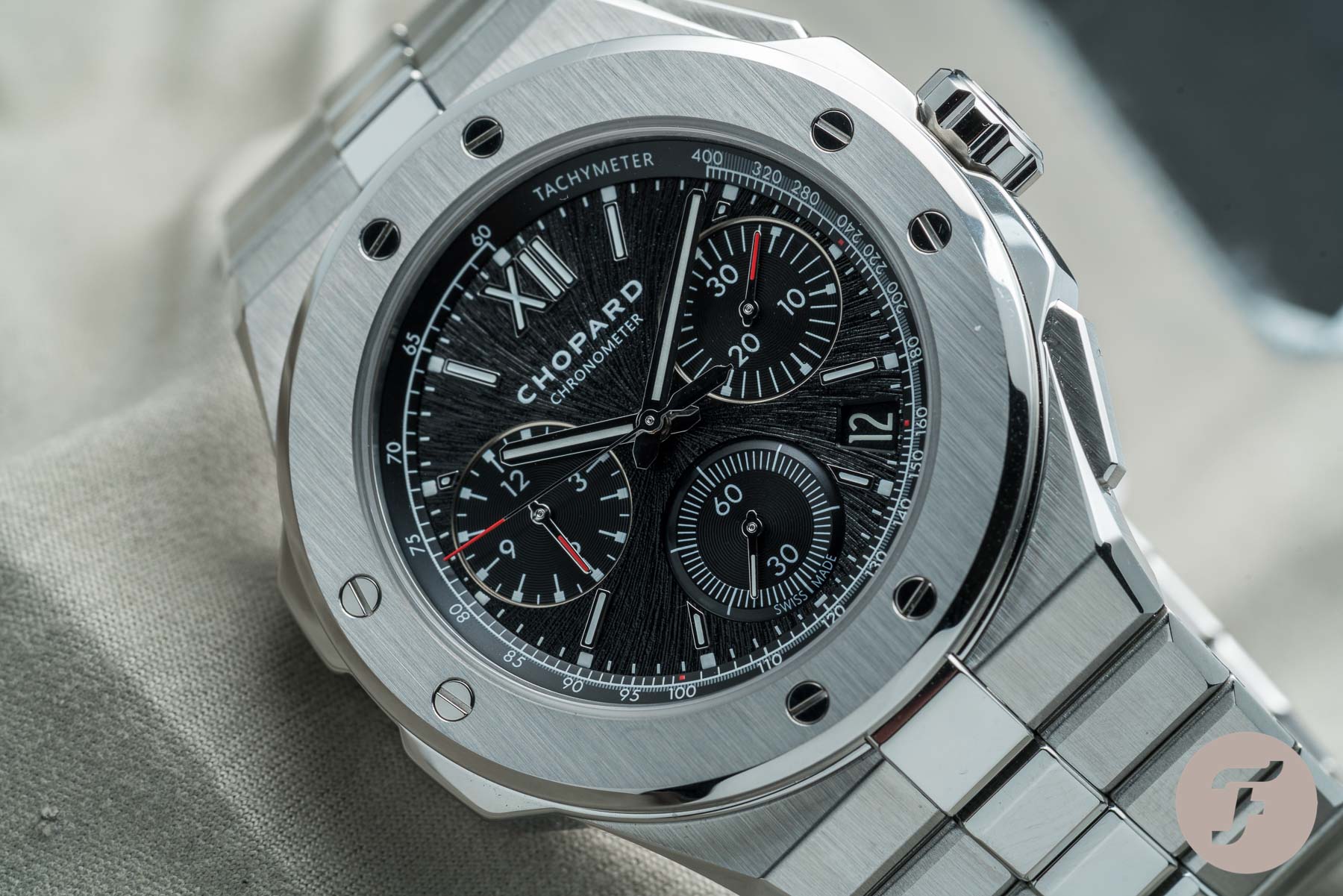 Ranking among the best value propositions in the steel sports watch segment, the Chopard Alpine Eagle XL Chronograph is a slightly more expensive, larger version of the company’s former Alpine Eagle Chronograph. Chopard even developed the Lucent Steel A223 for this luxury steel sports watch, which pays homage to the manufacturer’s St. Moritz lineage dating back to the 1980s. Consolidating its sports watch credentials, the Chopard Alpine Eagle XL Chrono doffs its hat to the manufacturer’s heritage in the steel sports genre, taking inspiration from a model first designed by Karl-Friedrich Scheufele in 1980. Its eight screws bolted on top of an elaborately shaped bezel offered collectors a unique look. 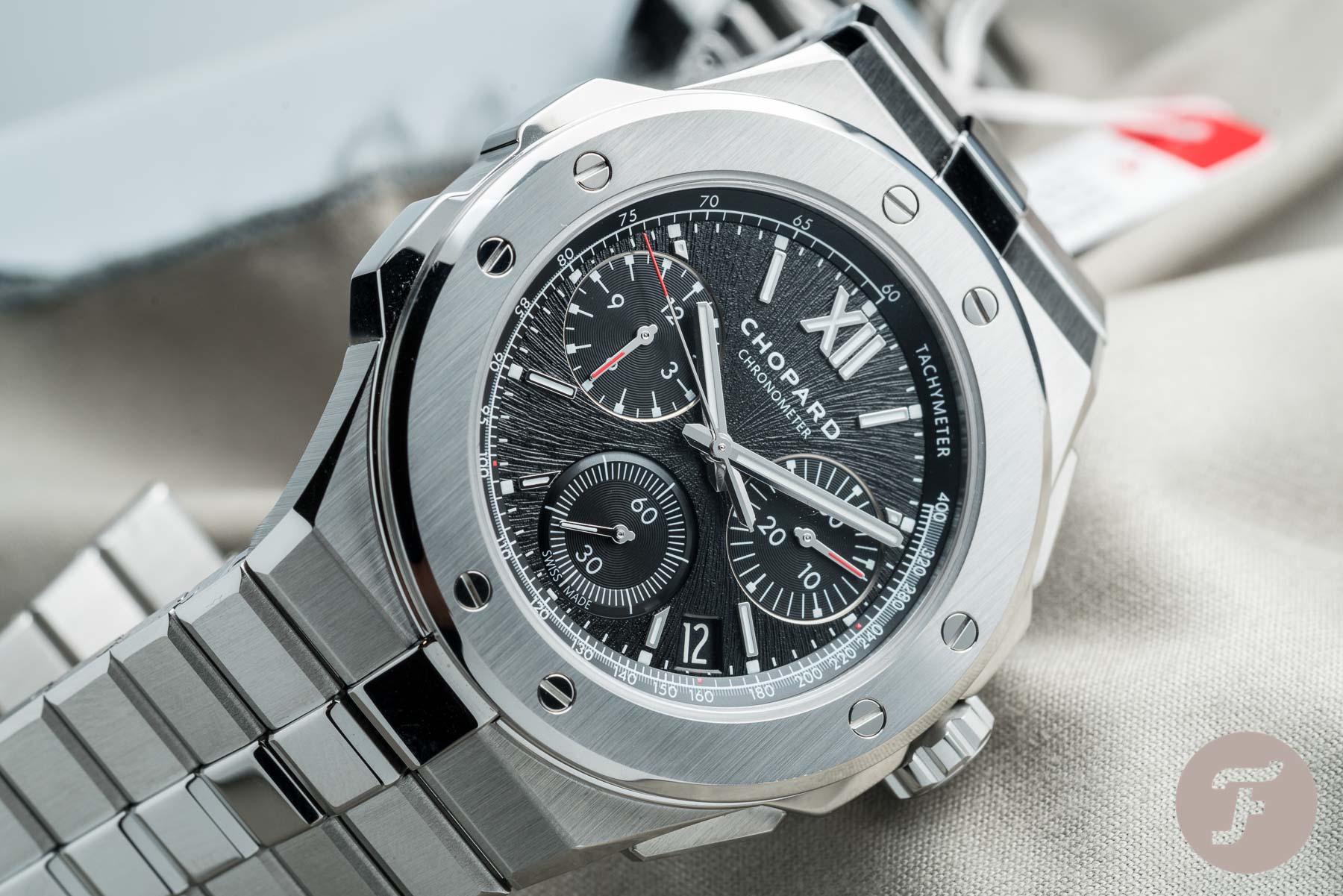 Not all watches from Chopard’s Alpine Eagle range will echo the XL Chronograph’s bold and masculine look but they will share some of its defining features. These include the tonneau-shaped case, distinctive crown, a date window, and a compass-engraved crown. In addition to this, Chopard references its commitment to supporting the Eagle Wings foundation, which finds innovative ways to highlight the effects of global warming on glaciers. One way the foundation does this is by attaching a camera to a white-tailed eagle as it soars over the Alps, capturing a portfolio of thought-provoking images as it glides. To pay homage to this sustainable work, Alpine Eagle watches feature a central second hand adorned with a feather-shaped counterweight and a sunburst dial inspired by the iris of an eagle, both of which can be admired in this disruptive steel sports watch. 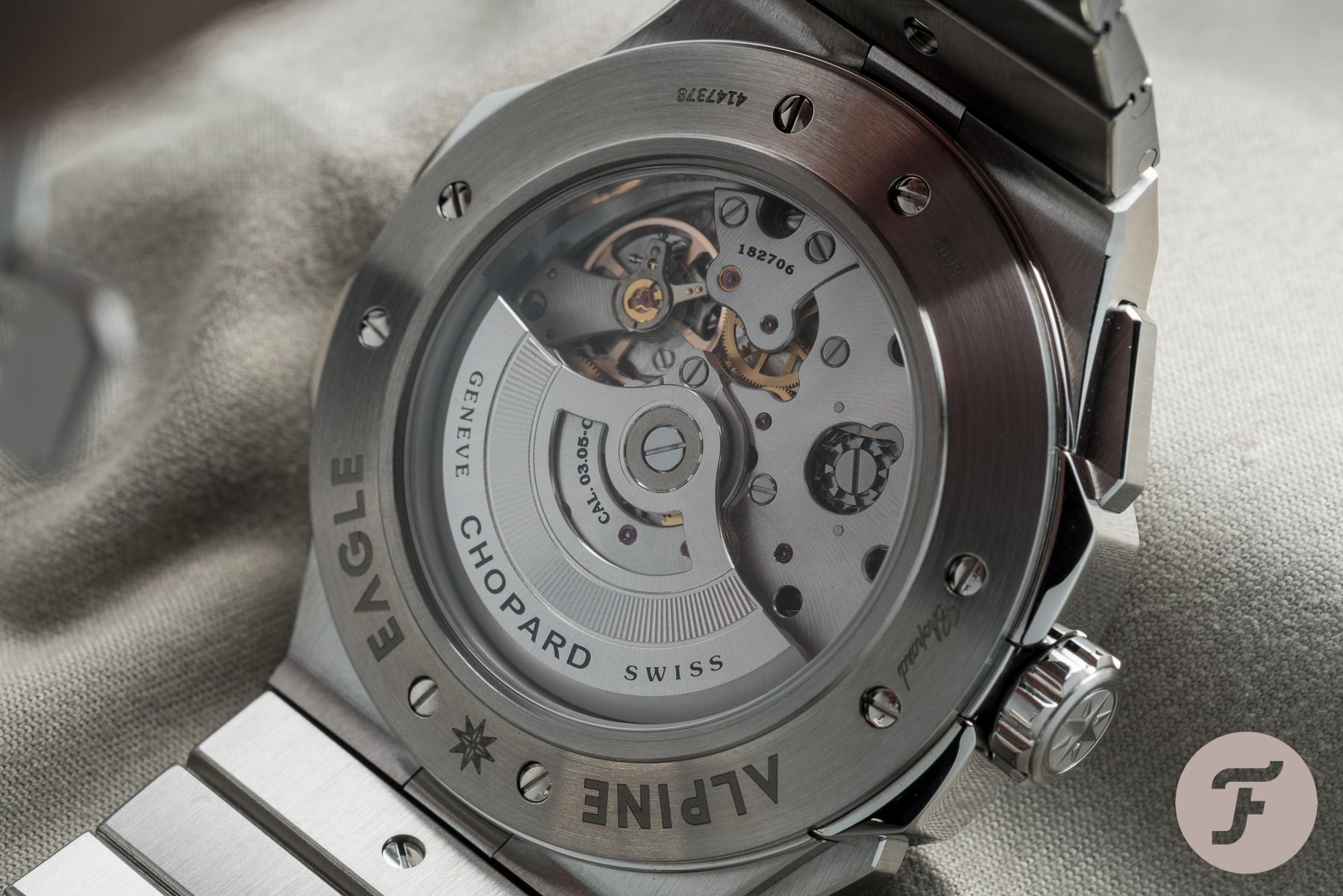 The Chopard Alpine Eagle XL Chronograph provides stopwatch timings courtesy of an in-house 03.05-C automatic flyback chronograph movement. The engine is housed within a 44mm steel case and features a column-wheel chronograph and a unidirectional gearing system, making it one of the more horologically sophisticated sports watches within the round-up. 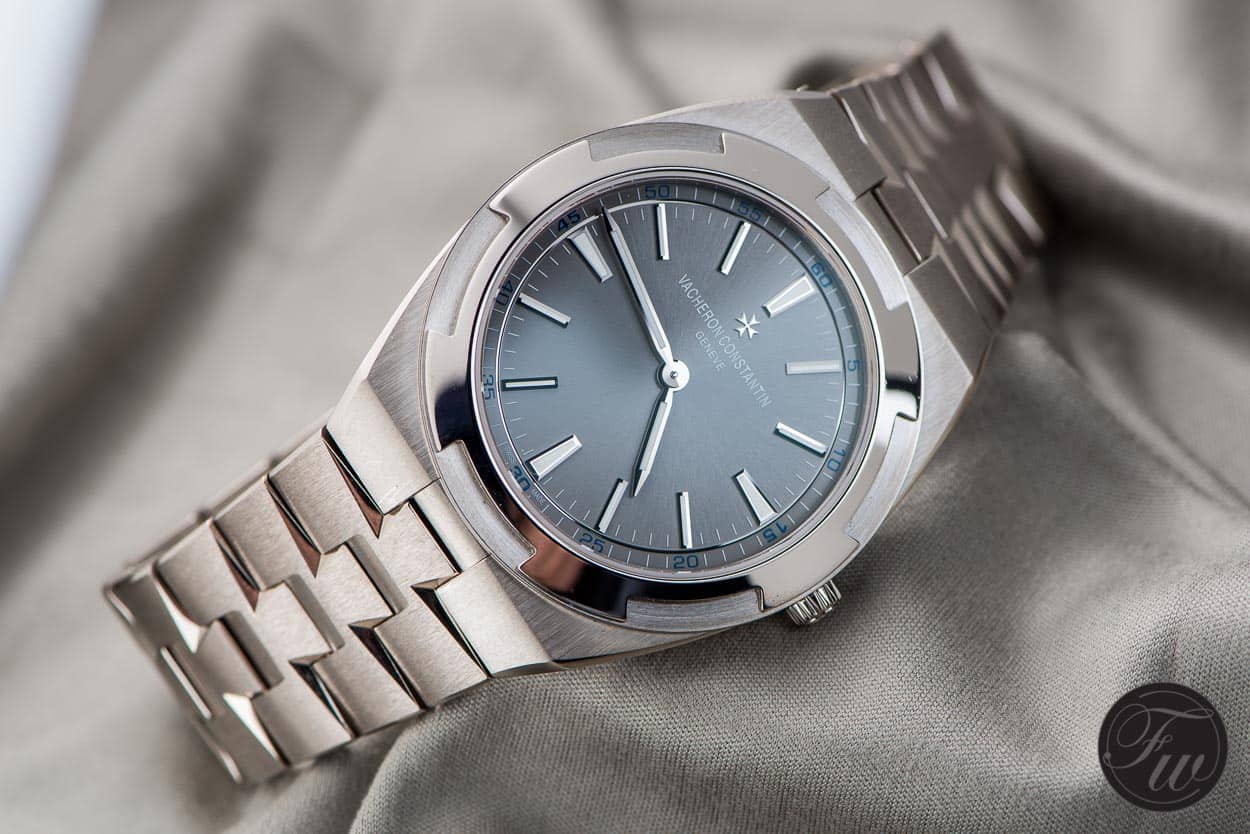 Geneva-based powerhouse, Vacheron Constantin celebrates an illustrious heritage. It’s also the oldest of the three members belonging to the Holy Trinity of the luxury watch industry. Deserving of its rightful position in the steel sports watch segment, it created the Overseas watch with a tonneau-shaped case and saw blade bezel. Its 37mm diameter makes it one of the smaller competitors in the line-up but what it lacks in size it certainly makes up for in terms of its rudimentary shape.

The design of the Vacheron Constantin Overseas watch was dreamt up by German designer, Jorg Hysek — one of the most influential and successful watch designers in history. Its thin barrel-shaped case topped with a notched bezel became a sweet spot for many collectors during the steel sports watch era.

Released in 1977 the Vacheron Constantin Nautilus 222 featured hexagonal-shaped middle links incorporated into an integrated bracelet and was powered by a remarkably thin in-house Calibre 1121. Its legible dial was generously treated with luminous material to enhance readability at night, whilst its case — a mix of curves and angles — retained some level of elegance. 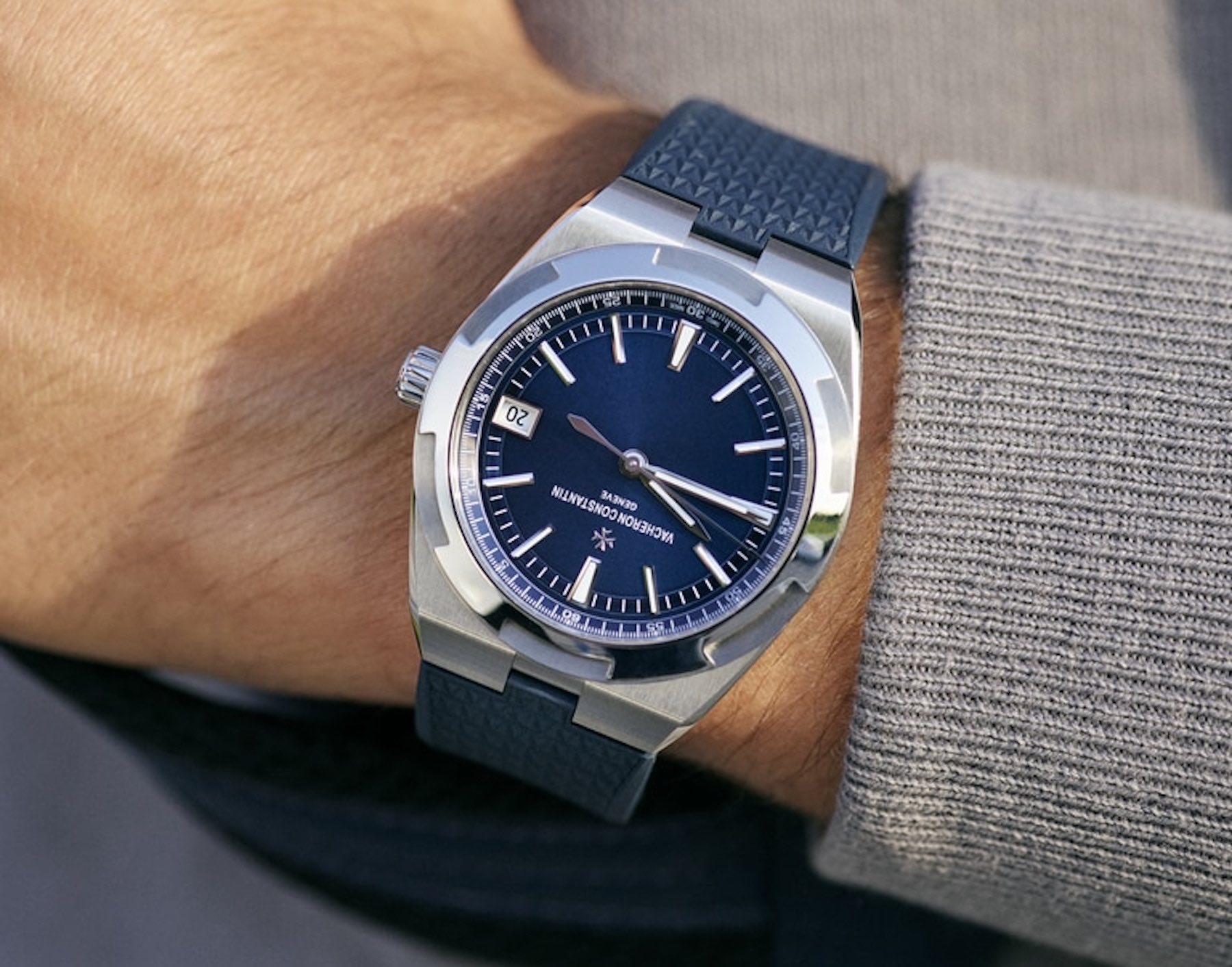 Not a Genta design…

Until more recently, the Overseas watch was, in my opinion, hugely underestimated. In conversation, the Overseas would often be glossed over. Mentioned in passing, and often confused with a Gerald Genta design even, the watch deserved more attention and certainly more respect. Although the ref: 222 was, in some ways, Vacheron’s attempt at creating a more commercial version of its earlier 2215 model (a less appealing rectangular-shaped watch with an octagonal bezel) it’s almost impossible to imagine a time where the Overseas watch wouldn’t make it to any definitive guide. Its iconic design has since been revisited back in 2016, with a series of modern complications and three-handed models, each one capturing the essence of travel and time, coupled with a new interchangeable strap system.

Now it’s your turn. Do these 5 steel sports watches get your approval? What are your favorite specific references of the above? We’d love to know your take on what defines a timepiece from this category. Hit us up in the comments below!