And beauty is, in this case, much more than skin deep...
Rob Nudds
comments 4
Share

What time is it? That’s right, it’s the 13th of the month, so that can only mean one thing for Fortis — it is time to unveil another watch. This time around, following on from the August and September releases of the Fortis F-43 BiCompax Flieger and the F-41/F-39 automatics respectively, we have another watch in this revamped Flieger series: the Fortis F-43 Triple-GMT watch.

GMT complications have, for the last couple of years at least, been front and center of the watch industry’s hive mind. Plenty of brands have released their take on this classic and never-more useful complication in the rollicking wake of Rolex’s 2018 update of the GMT Master II with a Pepsi bezel.

This new Fortis release combines the additional functionality of a GMT with the newly established (and very well received) colorway that ties this new generation of Pilot-inspired watches together. Why the “Triple-GMT” title? Likely because this watch enables the wearer to read the time in three zones simultaneously, using the hour and minute hand against the dial or against the 12-hour bezel, or by using the central GMT hand against the 24-hour track in orange. That’s awesome, but how does this one compare to the previous three releases we’ve seen from Fortis in the second half of 2020 so far? 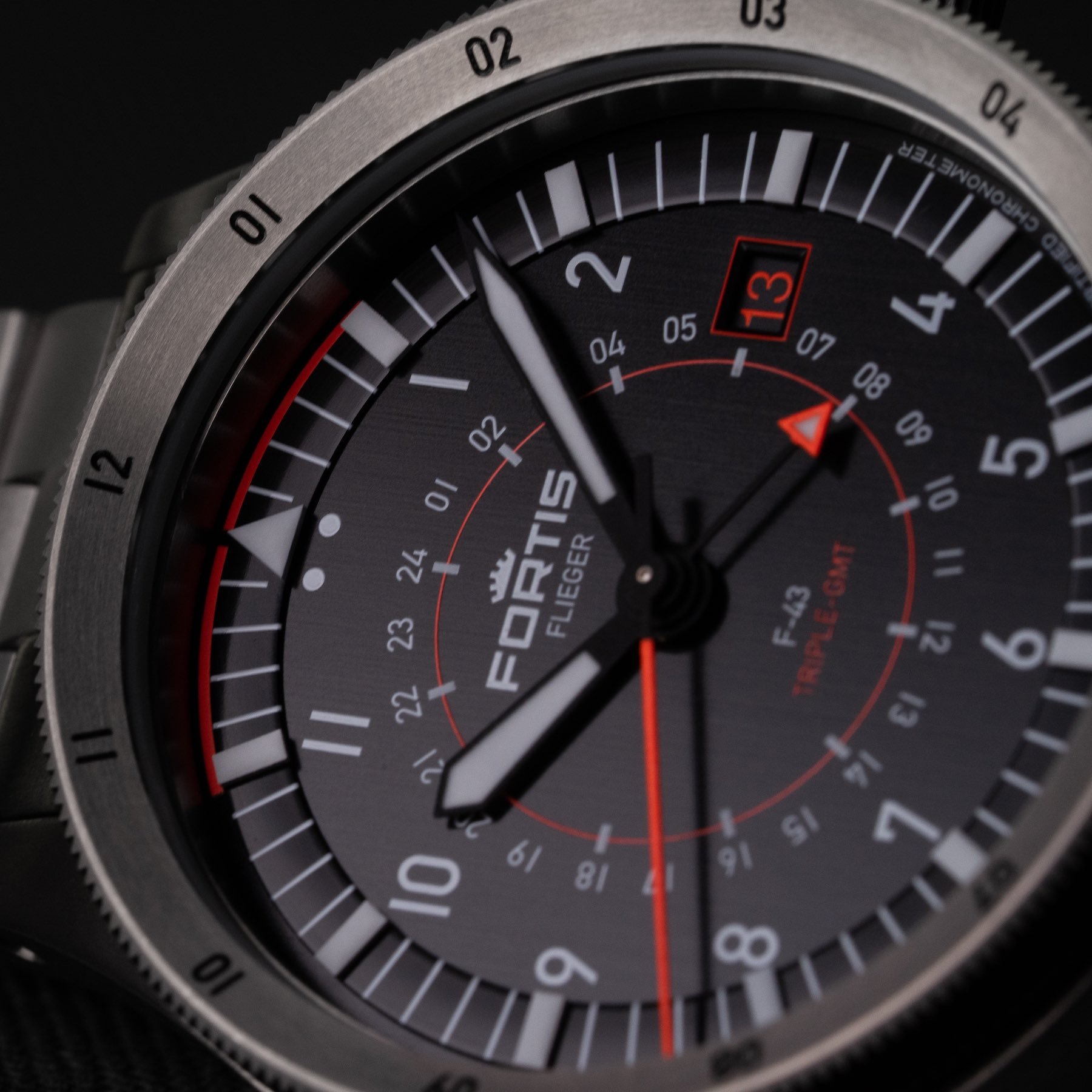 An important note on size

I was a big fan of last month’s drop. I really enjoyed the smaller option (the 39mm Flieger) as I felt it opened up a whole new customer base for the brand. While the best-balanced design thus far probably fell to the slightly larger 41mm variant, the new Triple-GMT has a lot to offer in that regard. 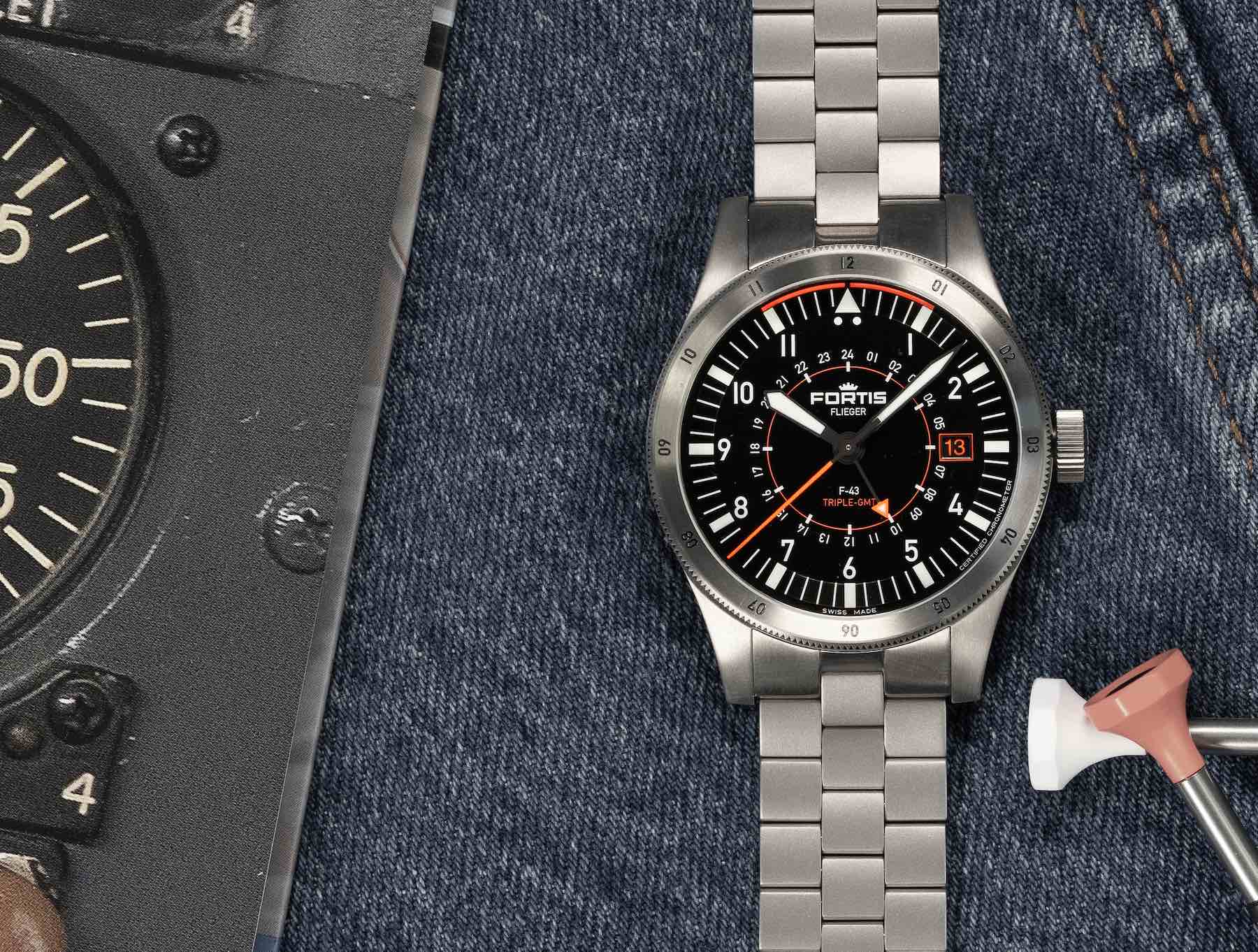 43mm is the first step into large, or even oversized territory, but is by no means unwearable as a diameter alone. The key, once this kind of diameter is reached, is how the watch head sits on the wrist when thickness and lug length are taken into account. The first 43mm model to debut this year — the F-43 Bicompax Chronograph we covered here — was a hulking timepiece, with a high-sided case (courtesy of that cool-but-controversial concave bezel). It was, in many ways, the perfect watch to launch this new era of Fortis timepieces because it was so striking in colors and proportions. 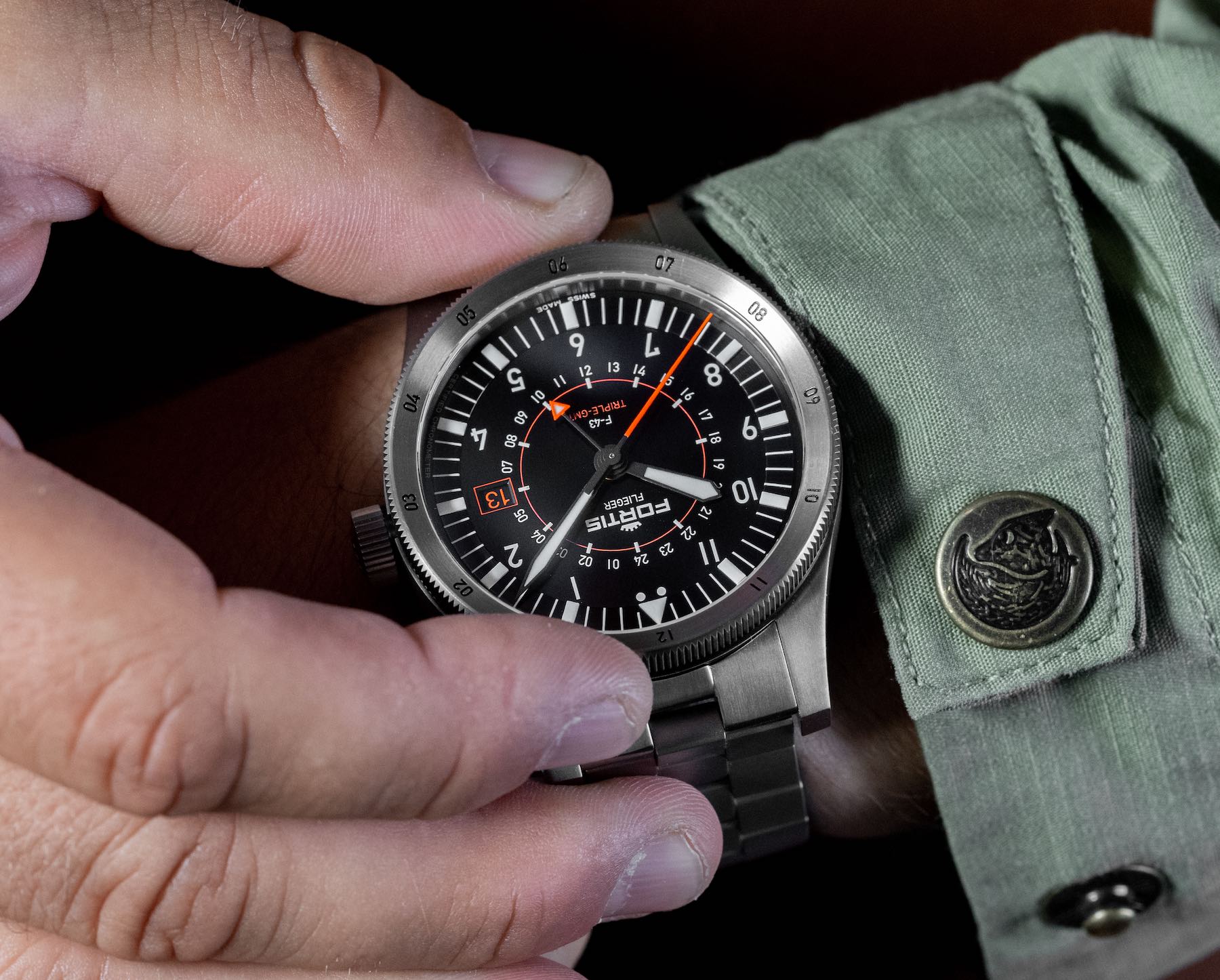 So what’s the problem?

The issue could be, however, that it is simply too much watch for everyone to handle. That’s no bad thing, of course, provided a brand takes pains to serve the rest of its audience too. Last month’s release seemed to combat this concern with aplomb. And yet a market remains for large-sized watches with the additional interest of a complication (such as a GMT). 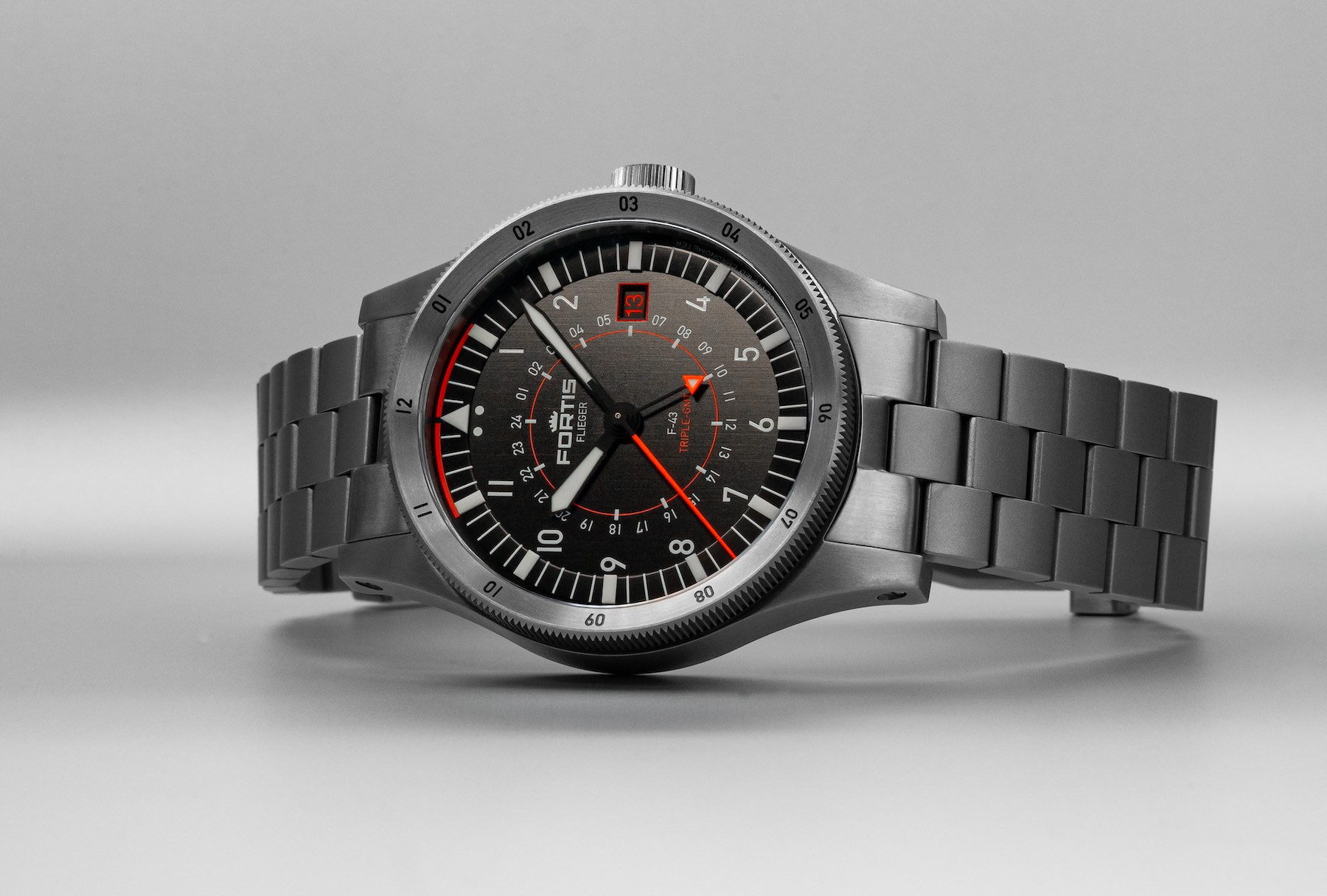 Although the new F-43 Triple-GMT is not small, it sits lower on the wrist thanks to its very slightly slimmer case construction (it measures 15.5mm tall as opposed to 15.73mm). This has the dual benefit of added comfort and (due to the diameter/width ratio) perhaps even greater wrist presence. For me, therefore, this one would rank higher in the desirability stakes than the Chronograph variant. 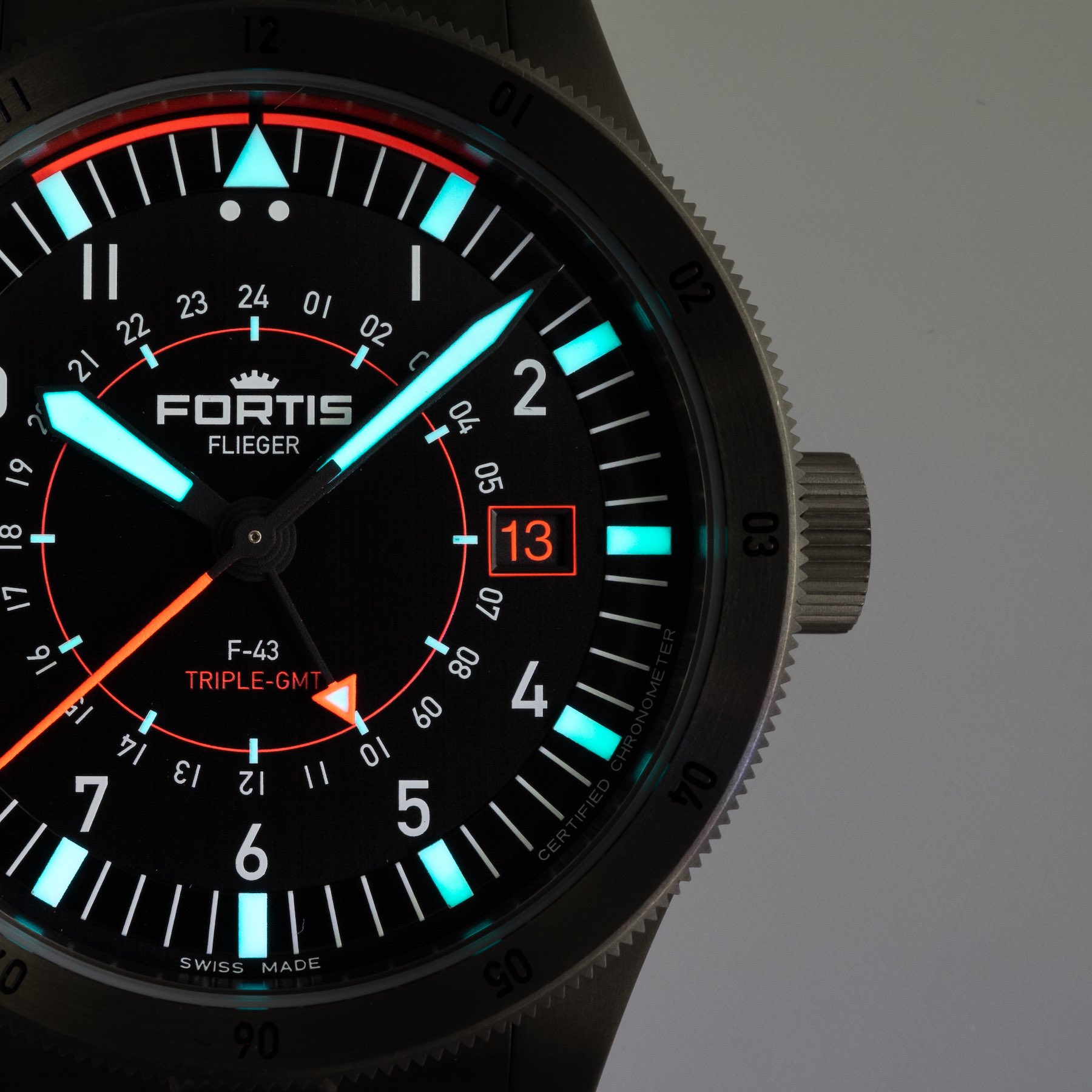 Both watches share the same lug-to-lug measurement (54.4mm), but, additionally, the Triple-GMT is noticeably lighter. On a leather strap, the watch head alone is over 30g lighter (106.03g vs. 136.95g). The difference becomes even more noticeable when fitted to their metal bracelets. The Fortis F-43 Bicompax weighs 245.76g on its bracelet, while the Triple-GMT comes in at just 162.95g in total when worn on a bracelet. Why? Simply because the Bicompax was made from the steel; the Triple GMT, however, is fashioned from titanium… 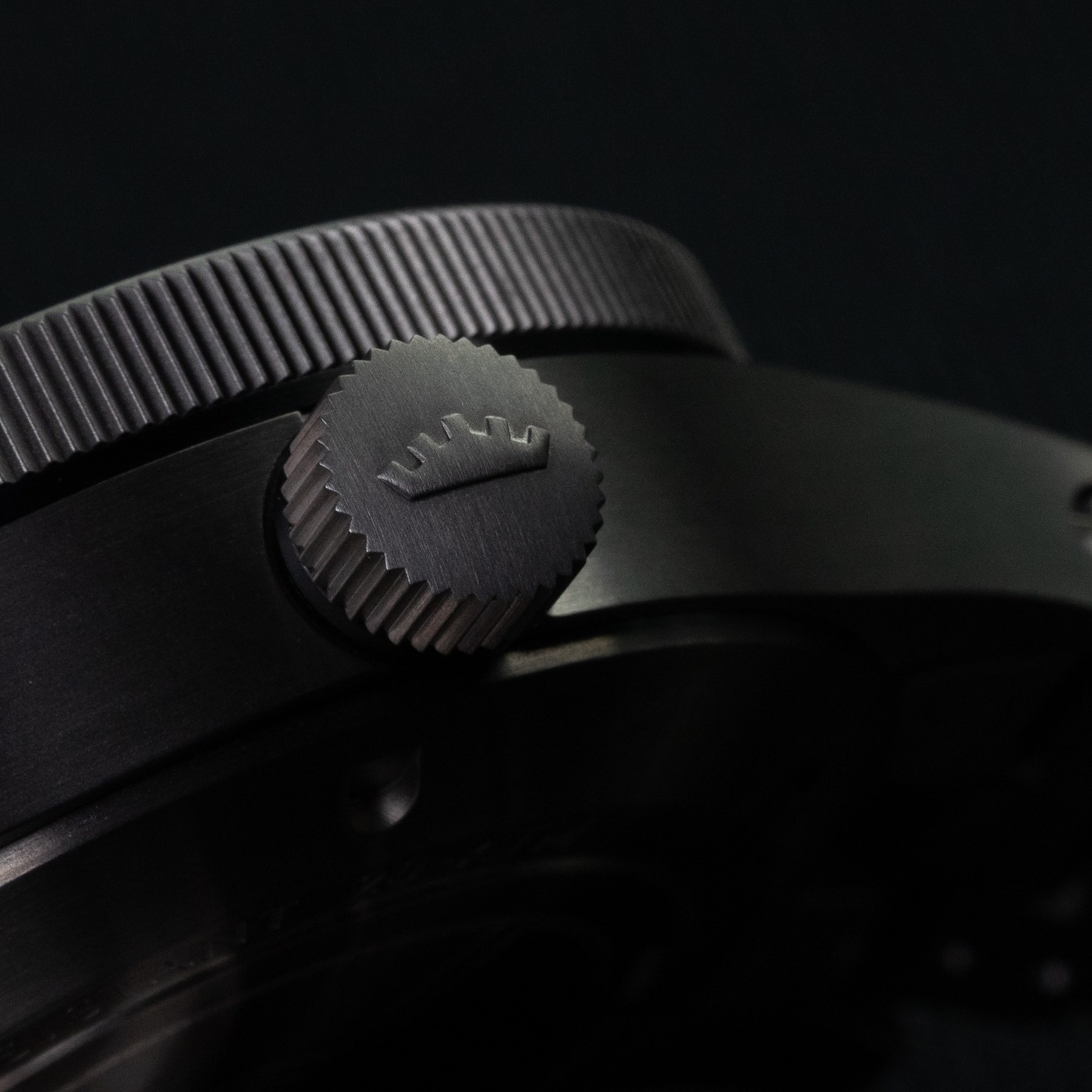 How effective is the design execution?

Fortis has done exceptionally well in establishing a new aesthetic for this revamp. It is pleasing on a couple of fronts. Firstly, it makes this branch of the Fortis catalog instantly identifiable. It brings a real character to a brand that has always produced excellent quality products but, undoubtedly prior to the 2018 takeover, sometimes struggled to separate itself from more mainstream brands popular today. A long heritage can only take you so far. To best exploit such a history, a brand must continue to push forward. A brand must innovate. And, whether some brands like it or not, a brand must take risks to attract the eyes of an audience saturated with options. 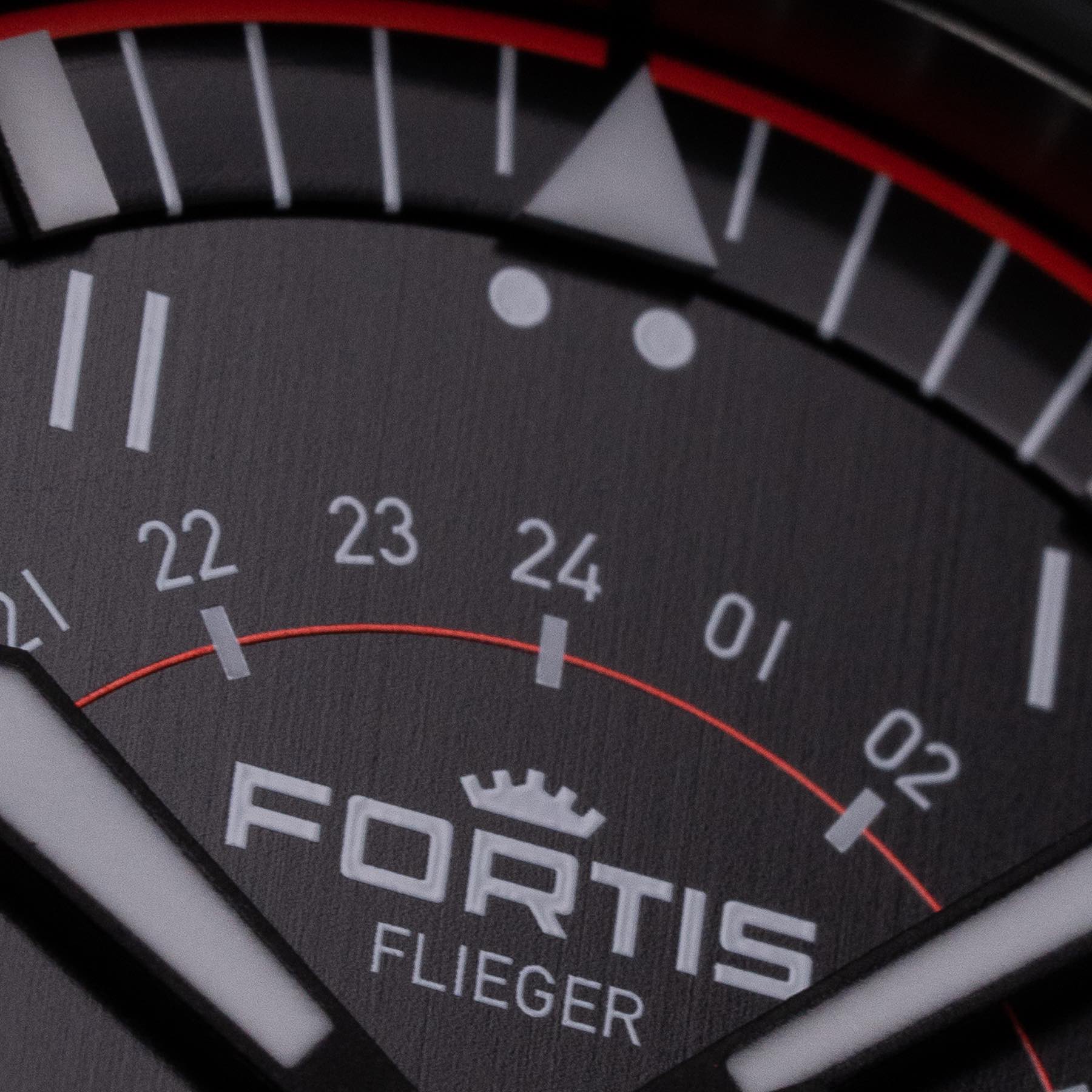 Secondly, the Flieger family follows a chromatic blueprint that is being adhered to strictly and applied in novel and creative ways with every new release. Here we see the typical Berlac Fluor Orange used to highlight the GMT functionality in a way that is consistent with its recent range mates, but distinct to its own needs.

…I genuinely believe it is getting better and better.

And you know what? I think this is the best execution of this concept yet. I know I keep on saying that every time Fortis drops a new release, but I genuinely believe it is getting better and better. The vertically brushed texture of this dial adds another layer of interest that was absent on previous models. 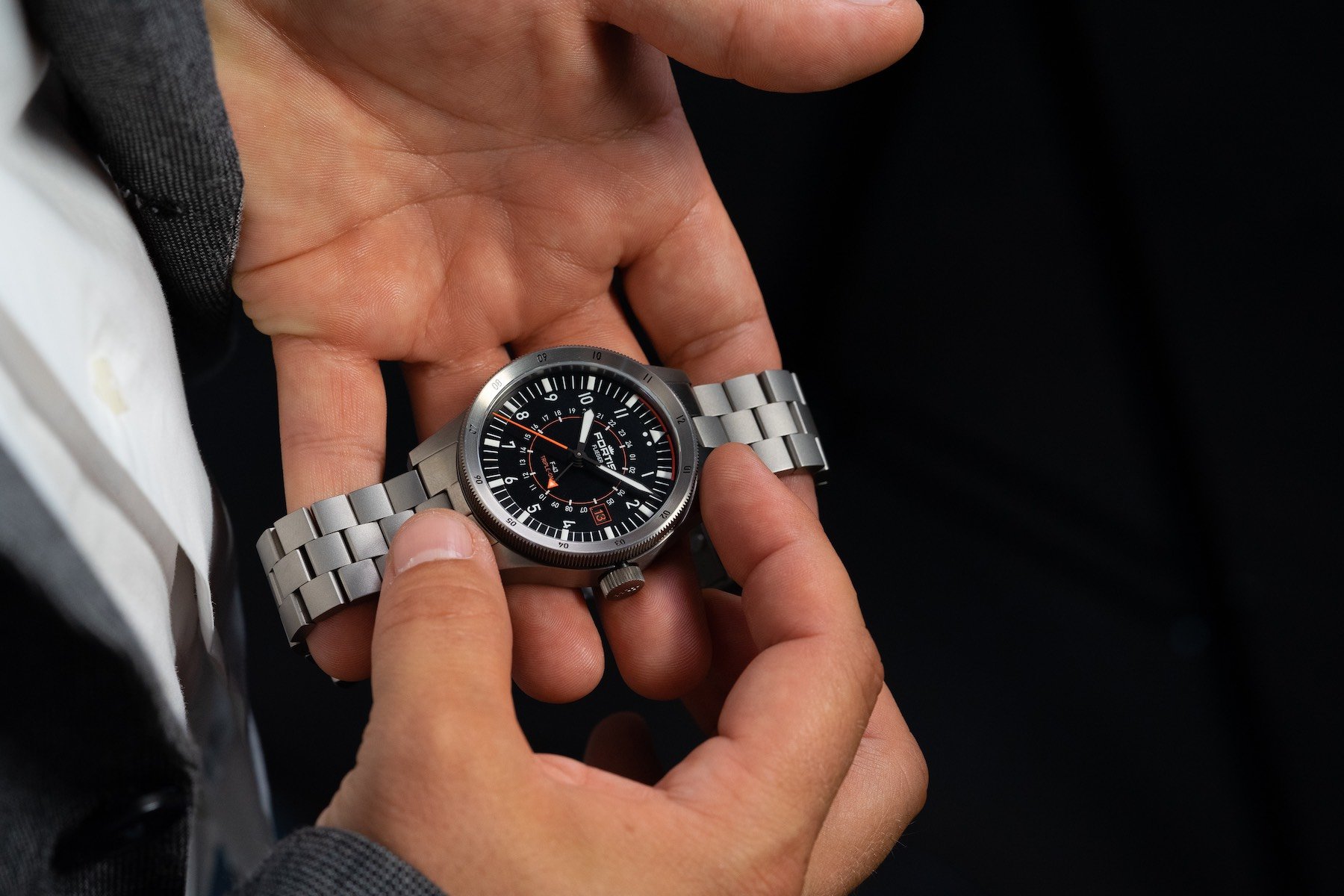 If I’d been told of this addition before seeing it, I would not have been for it, but its addition is so subtle it really works. If anything, it provides an even more suitable background for that popping orange and crisp white combo. The green Brixtrack from the previous releases makes way for a cleaner white. The result is simply stunning. 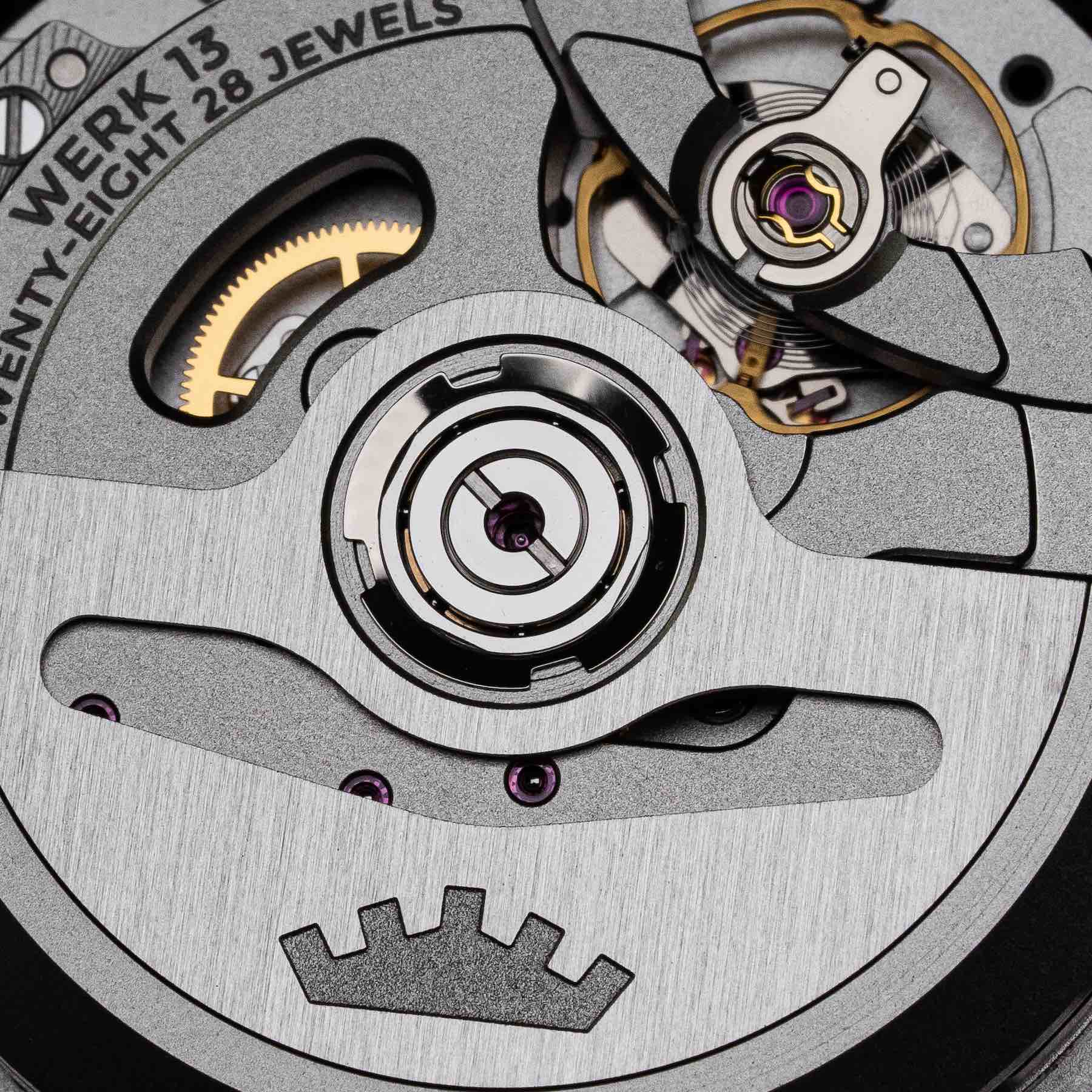 But there’s more. There’s something very special going on inside the Triple-GMT. The eagle-eyed among you will have noticed how familiar the rotor weight of this movement — named Werk 13 — looks. That’s right, you’ve seen this pattern before, but not from Fortis. What we have here is a Kenissi-made movement. The Fortis F-43 GMT triple marks the first of many collaborations to come. And, in my opinion, is the really big news of this release. 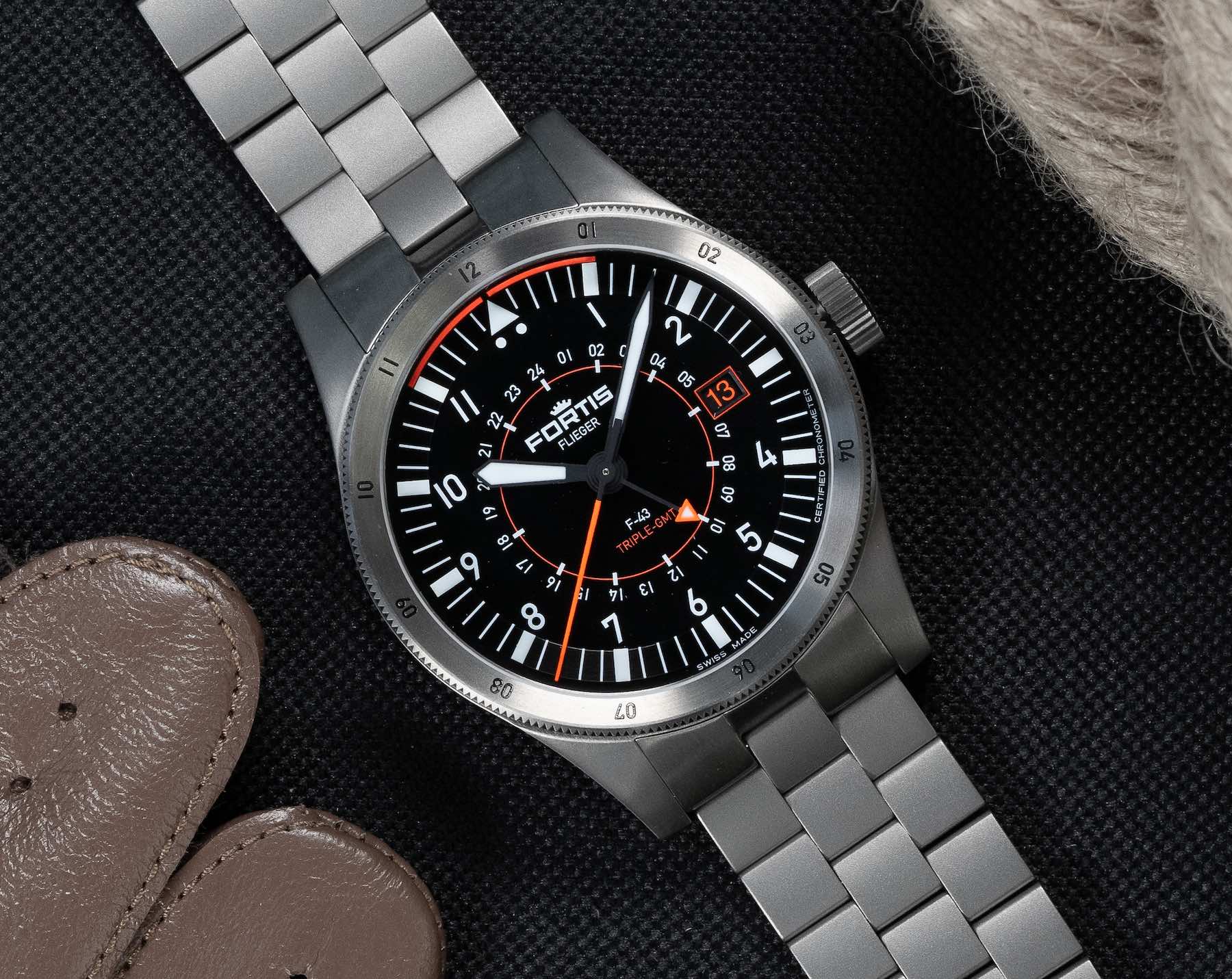 Yes, the added functionality s appreciated. Yes, the dial layout is truly awesome. But the movement upgrade? That’s special. It adds a huge amount of value to this Fortis line and the brand in general, in my opinion.

Better still, the Werk 13 Manufacture Calibre is a COSC-certified chronometer.

So how good a GMT movement is Werk 13? Well, it has a jumping hour feature that means the wearer can easily shift the timezone forward or backward by one-hour increments at any time of day. There’s a 70-hour power reserve, which we’d expect from Kenissi’s recent spate of calibers but is still by no means standard. Better still, the Werk 13 Manufacture Calibre is a COSC-certified chronometer. This is, to me, one heck of an upgrade for an already soaring range. The Triple-GMT, priced at €4,500, has just become my new favorite Fortis. But what do you think? Learn more about Fortis here.

Hot Topics
Introducing: The New Seamaster Professional 300M 60 Years Of Bond — With A Special Animated Case Back
105 comments
Are You Still After An Omega × Swatch MoonSwatch?
85 comments
It’s Time To Invest In A Dress Watch — Our Picks From Breguet, Omega, Grand Seiko, And More
72 comments
The Rolex Waitlist Conundrum — How Much Will The Price Of Your Watch Increase While You Wait?
50 comments
The Best Omega Speedmaster Watches Of 2022
40 comments
Popular
Rolex Submariner – Historical Overview Of A Diving Legend
Robert-Jan Broer
22
Hands-On Longines Legend Diver in Black Ref. L3.774.2.50.9
Robert-Jan Broer
1
Hands-on: Tudor Black Bay 36 – Like a Comfy Pair of Jeans
Michael Stockton
13