A “Square” collaboration with Eric Haze, an MTG and Mudmaster inspired by solar flares, and an outrageous MR-G in the Gassan swordsmithing style
Lex Stolk
comments 7
Share

According to Chinese astrology, next year will be the Year of the Rabbit. In Japan, however, they might see that differently. As the first Casio G-Shock came out in 1983 and 2023 marks the 40th birthday of the brand’s indestructible watch, next year will be the year of the G-Shock. And although we still have two months to go, the first four Casio G-Shock 40th Anniversary watches are already here. There’s the “Square” GMW-B5000EH, the Flare Red MTG-B3000FR-1AER and GWG-2040FR-1AER models, as well as the outrageous MRG-B2000GA-1A with a finish created in the 800-year-old swordsmithing style of Gassan.

Let’s kick off the “new year” with the model that, of the four Casio G-Shock 40th Anniversary watches I had the chance to grab and feel at Fratello HQ, resembles the original G-shock of April 1983 the most. That is, of course, the black GMW-B5000EH. This metal Square is a collaboration model created together with Eric Haze, the famous New York-based graffiti artist. G-Shock has a long and rich history when it comes to creating watches with people and brands that operate in fashion, sports, art, music, and other cultural realms. And Haze is a veteran when it comes to special G-Shock models. The American artist, who started his career in the 1980s together with the likes of Keith Haring and Jean Michael Basquiat, has been collaborating with G-Shock since 1999. 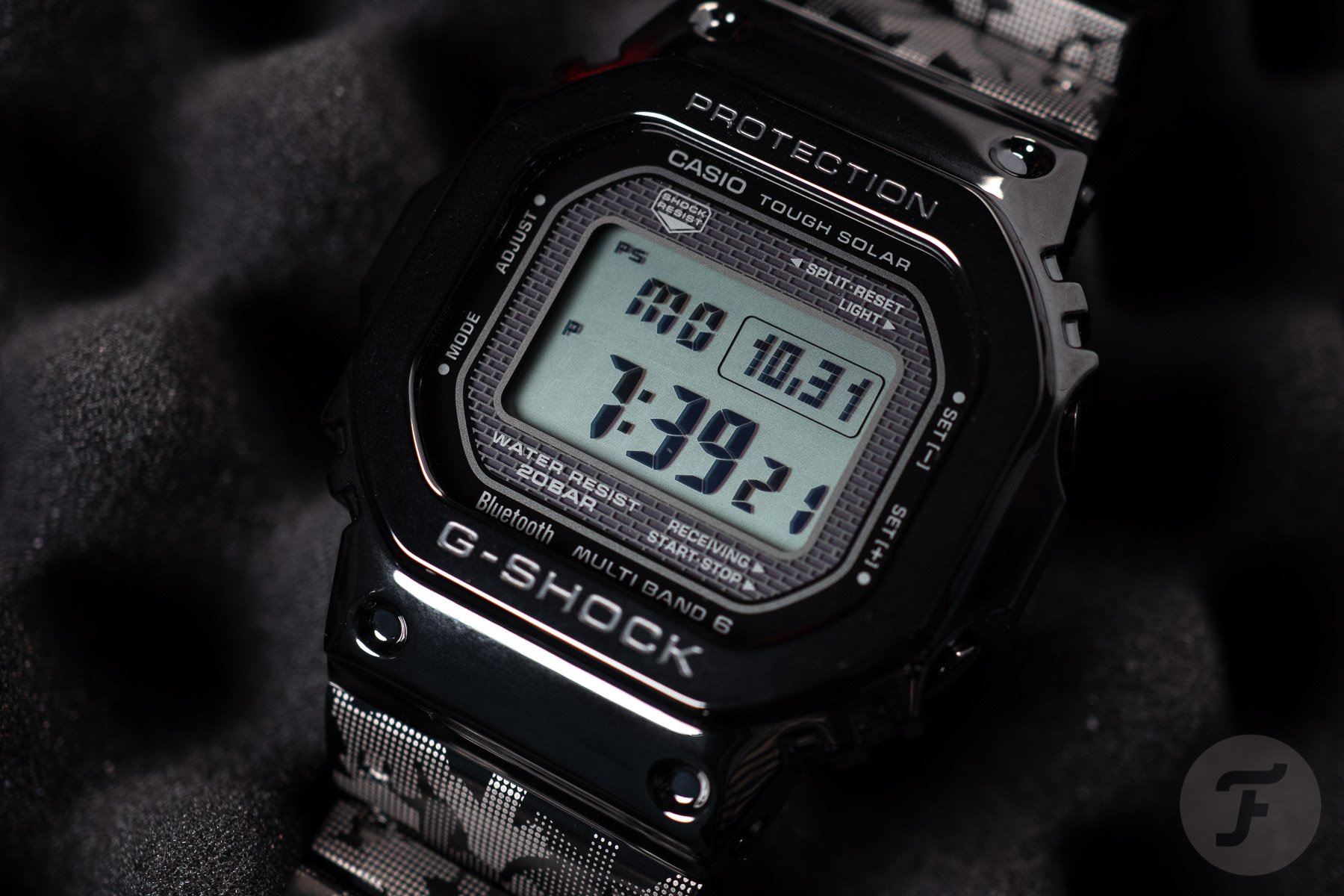 The connection between G-Shock and Eric Haze has been very tight and has left a very visible mark. Haze not only co-created several watches, but he also designed different commemorative G-Shock anniversary logos and styles. And so it won’t come as a surprise that the 40th Anniversary logo is also a Haze creation. You will find it on the case back of the GMW-B5000EH (€749 / US$720), the first G-Shock × Haze collaboration model with a full-metal design. The foundation of the special model is the GMW-B5000D, which takes its design cues from the very first G-Shock. 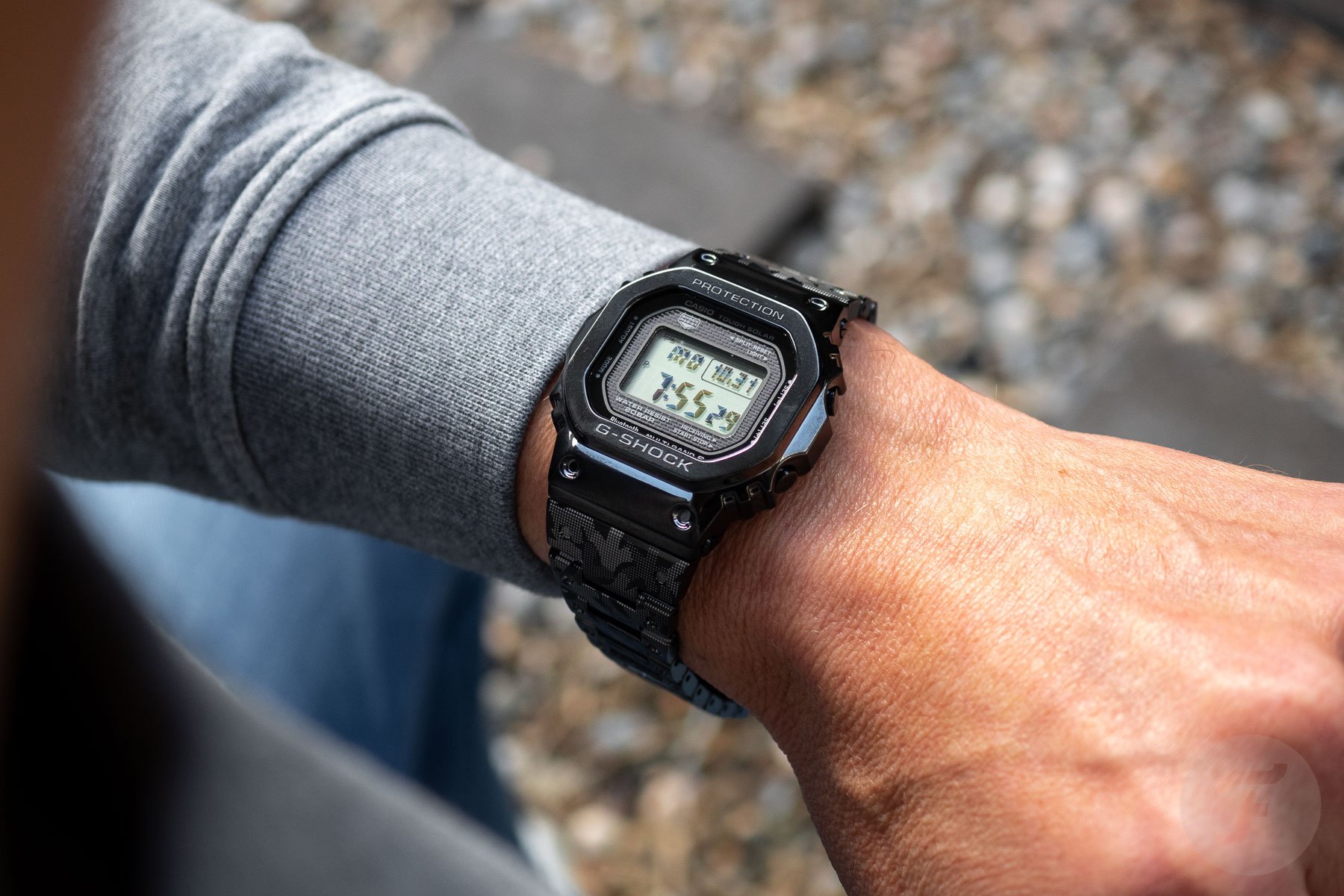 The steel bracelet features signature Haze artwork. First, Casio applied black ion plating to the bracelet, then overlaid it with laser-engraved patterns of dots that reproduce Haze’s work in a subtle and introverted yet very appealing way. The pattern is absent from the shiny black case, and that creates a nice contrast.

And speaking of contrast, the GMW-B5000EH has a positive display! Why the exclamation mark, you ask? Because I do like blacked-out, badass G-Shocks, but I also don’t mind reading the time instantly, that’s why. This collaborative G-Shock is black, badass, AND functional. 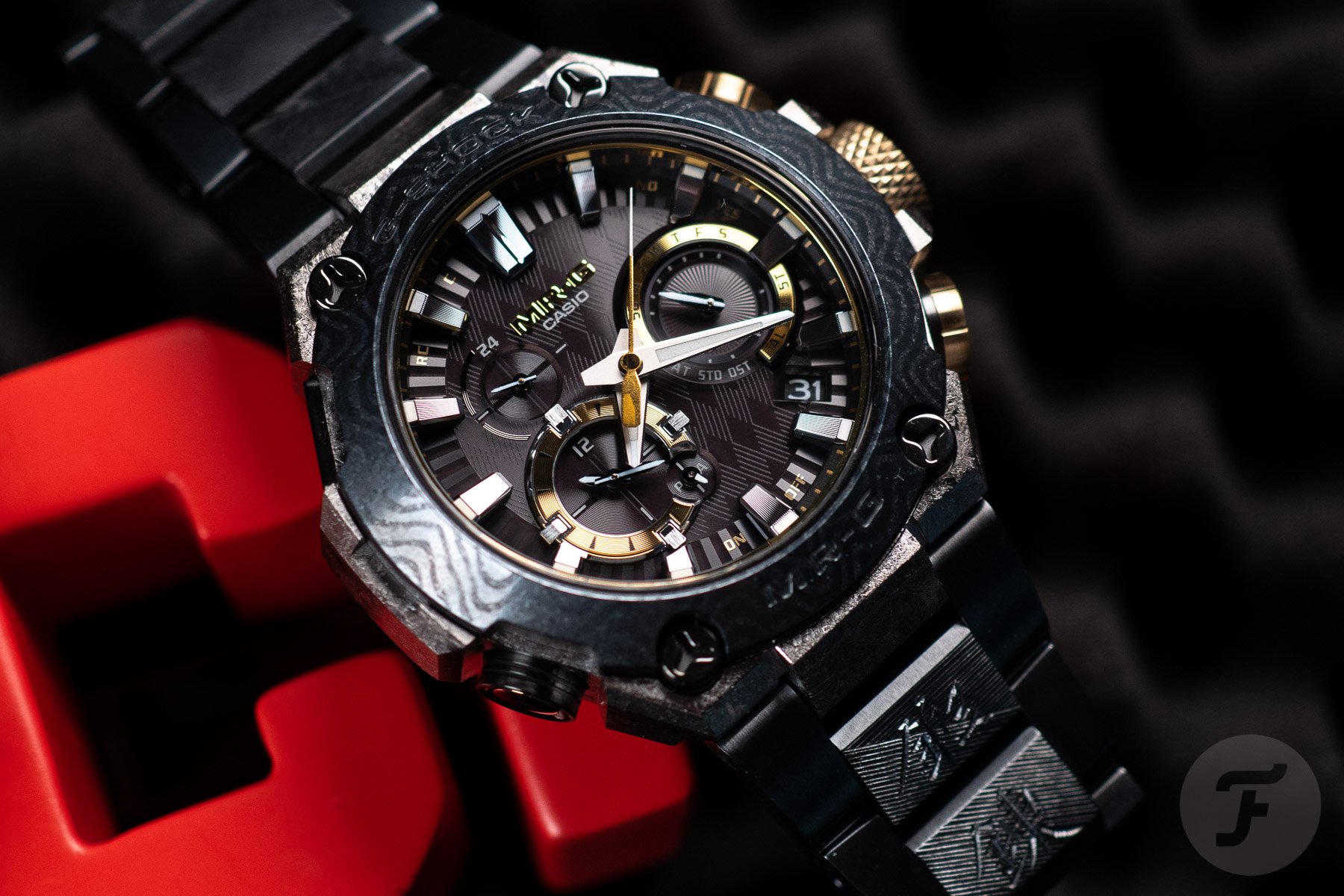 The MRG-B2000GA-1ADR Gassan (€7,500) will go not unnoticed, and not just because of its generous 55.1 × 51 × 15.9mm proportions. This high-end limited release of 500 watches worldwide, features a special finish created in the Gassan swordsmithing style. But the G-Shock is still a veritable youngster compared to this 800-year-old sword-making technique. The dark gray bezel of the watch has a distinct ayasugi pattern, mimicking layers of forged steel that give a Gassan sword its unique look. 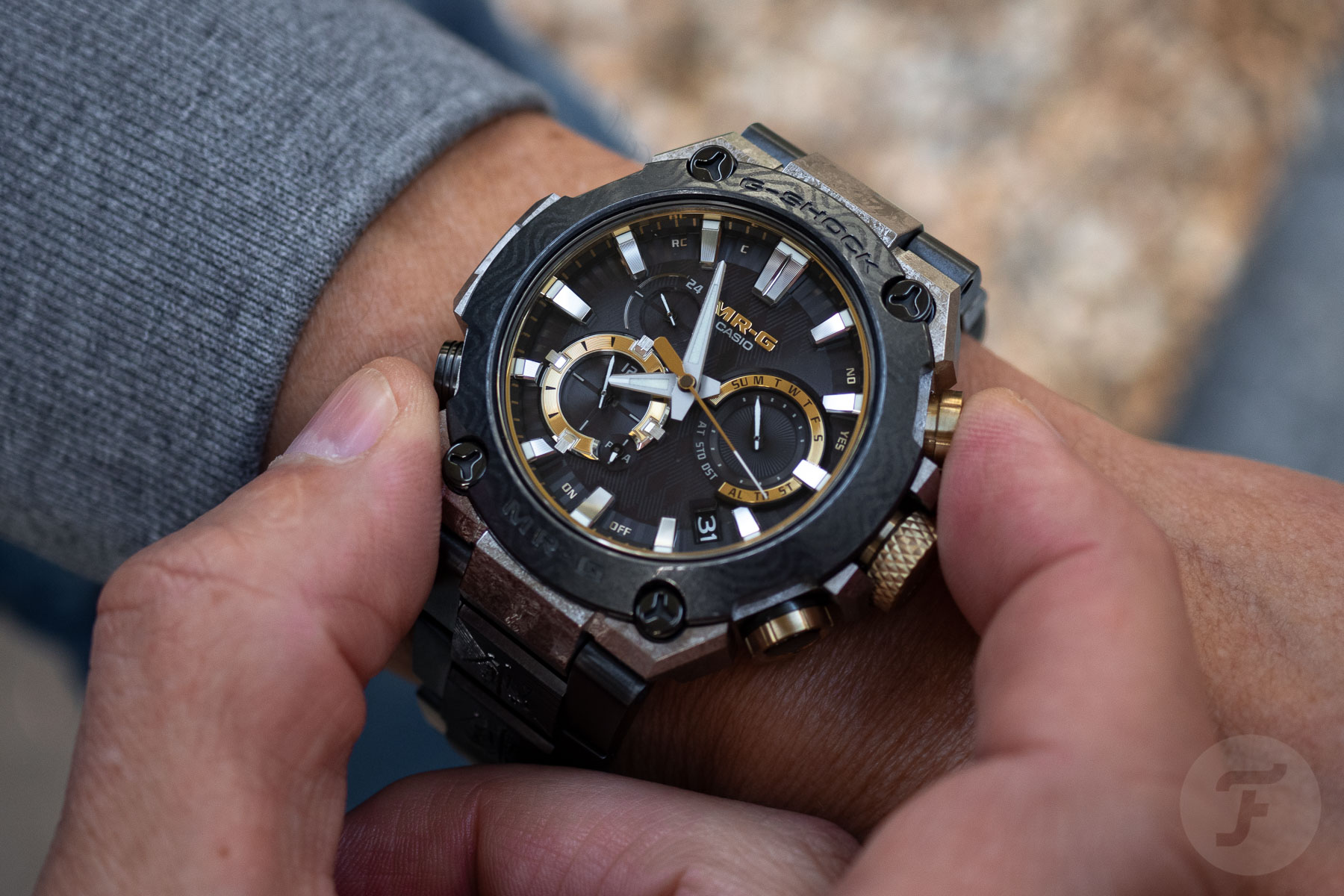 Not steel, but rather pure Ti64 titanium was used to create the bezel. This titanium went through a recrystallizing process and also received a blue-gray arc ion plating (AIP) for a one-of-a-kind pattern. You might think that AIP is a bit like a DLC treatment, and you’re not completely wrong. But the wear-resistant AIP — a Kobe Steel invention, by the way — has a hardness equal to or even greater than DLC.

The case also received a special treatment. The pattern you see is a heat-treated crystal one that resembles the nie pattern seen on the blade of swords. Nie (沸) literally means “boil”, and it’s the name of larger martensite crystals that appear on the polished surface of some traditionally made Japanese swords. This name refers to the pattern that sometimes looks like bubbles of boiling water. And the pattern will look like it did when the watch came out of the box for years to come because the case received the MR-G’s signature deep hardening and titanium carbide treatment. 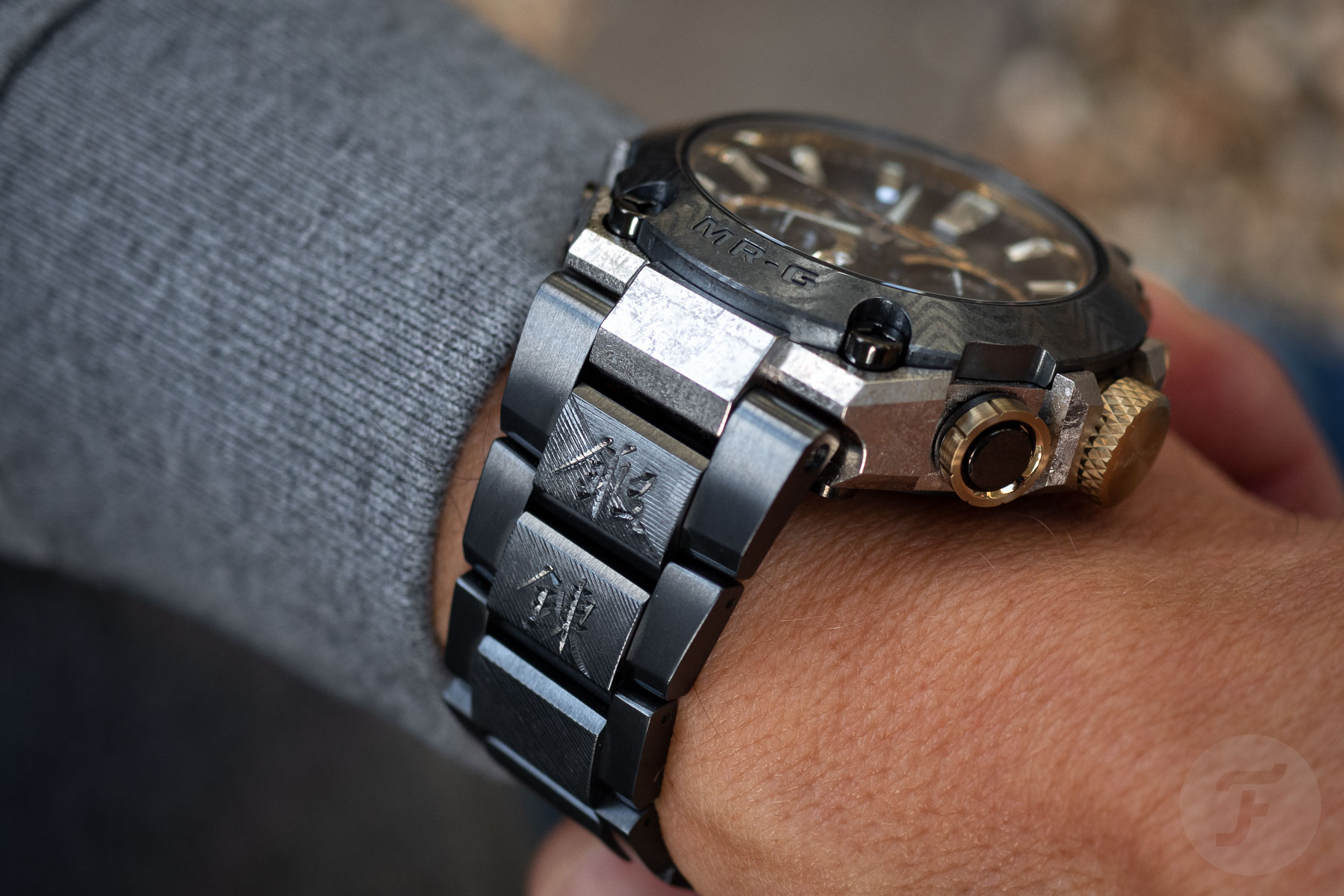 A plaque to commemorate 40 years of G-Shock

In case you forget what your MRG-B2000GA-1ADR Gassan is all about, there’s a plaque on the left side of the case that reads “G-SHOCK 40TH”. And there are more elements that keep you aware that this is not just any G-Shock. Two links of the titanium three-link bracelet have markings similar to those used by sixth-generation master swordsmith Sadanobu Gassan on his blades. And the detailing and decoration don’t stop with the bracelet. The dynamic dial also shows a textured diamond-like pattern that plays with the light. 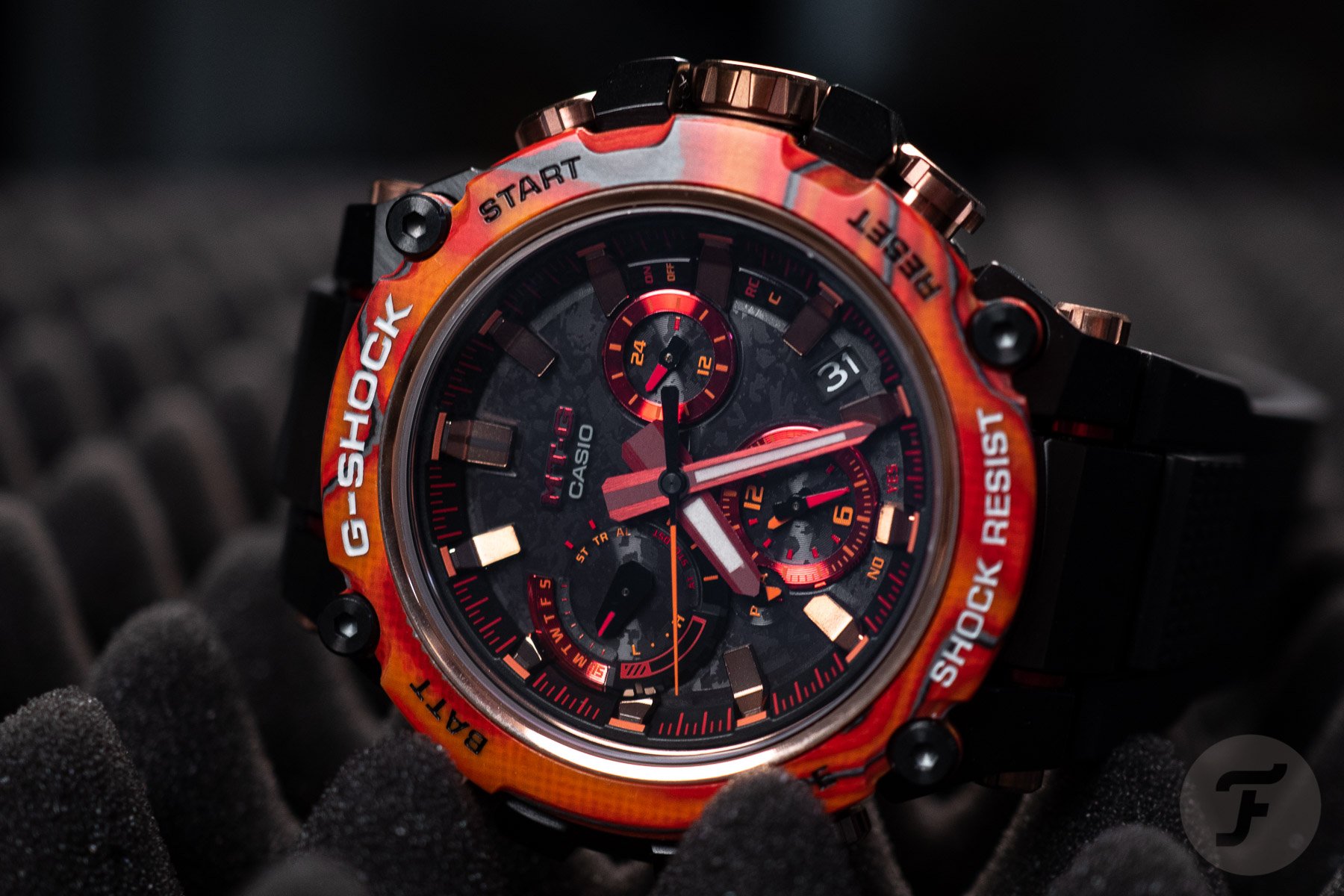 The wildest selections of the first four G-Shock 40th Anniversary watches are most definitely a pair of Flare Red models. First up is the 51.9 × 50.9 × 13.2mm MTG-B3000FR-1AER­ (€1,350 / US$1,300) with its steel case and bezel inspired by an astronomical phenomenon of intense power, the solar flare. The wild bezel is a multicolor construct made of layers of carbon and glass fiber sheets containing phosphorescent particles. The result is a ring that evokes the dynamic and explosive power of the Sun’s surface., and no two bezels look exactly the same. 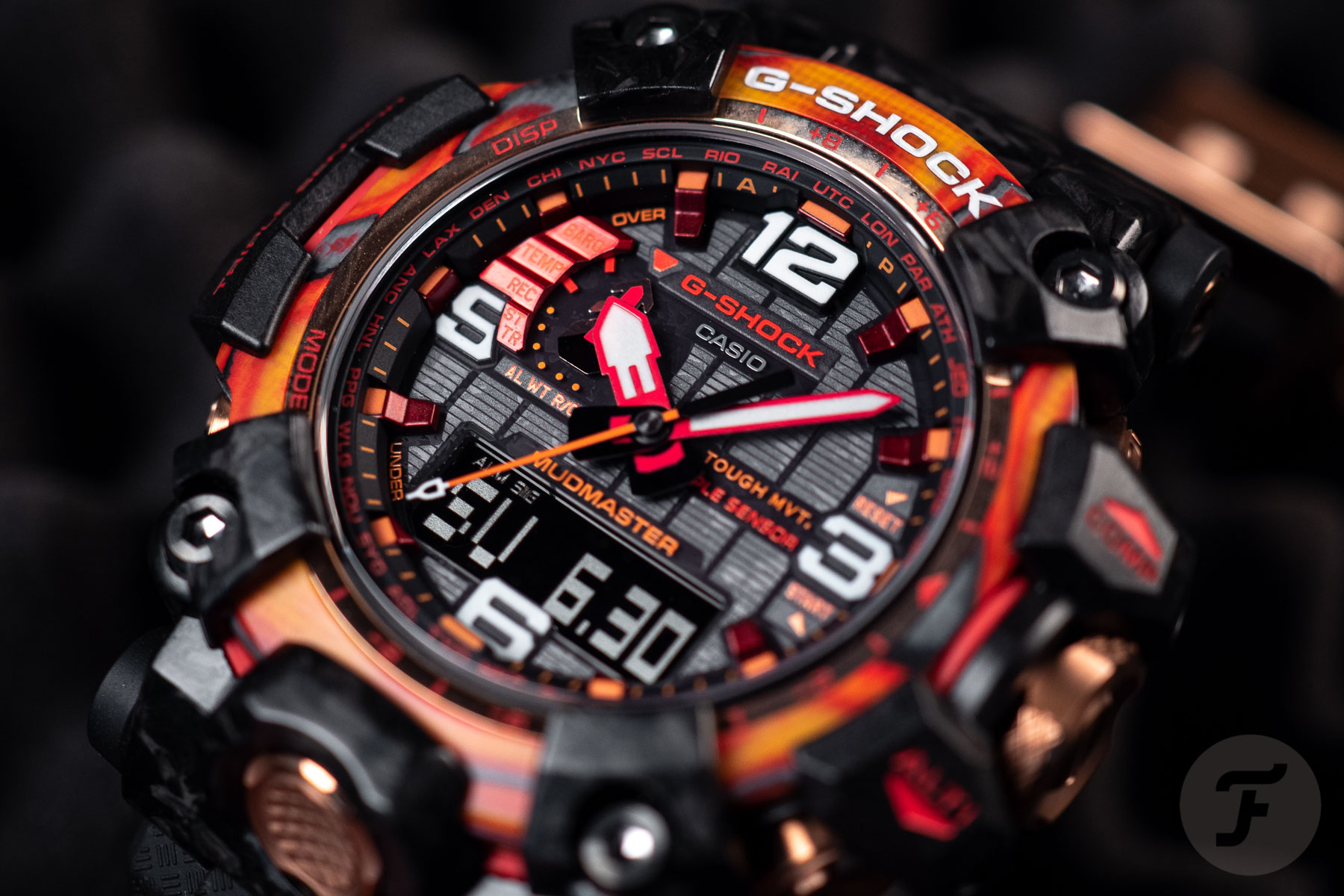 The GWG-2040FR-1AER­ Mudmaster (€1,150 / US$1,100) is a bulky one that measures 61.2 × 54.4 × 16.1mm. But since it’s a Mudmaster, what did you expect? This particular Mudmaster combines the intense red bezel with “claws” made of forged carbon fiber. Interspersed among the bezel with its solar-flare pattern are also phosphorescent particles that glow green in the dark — quite the cosmic spectacle indeed. 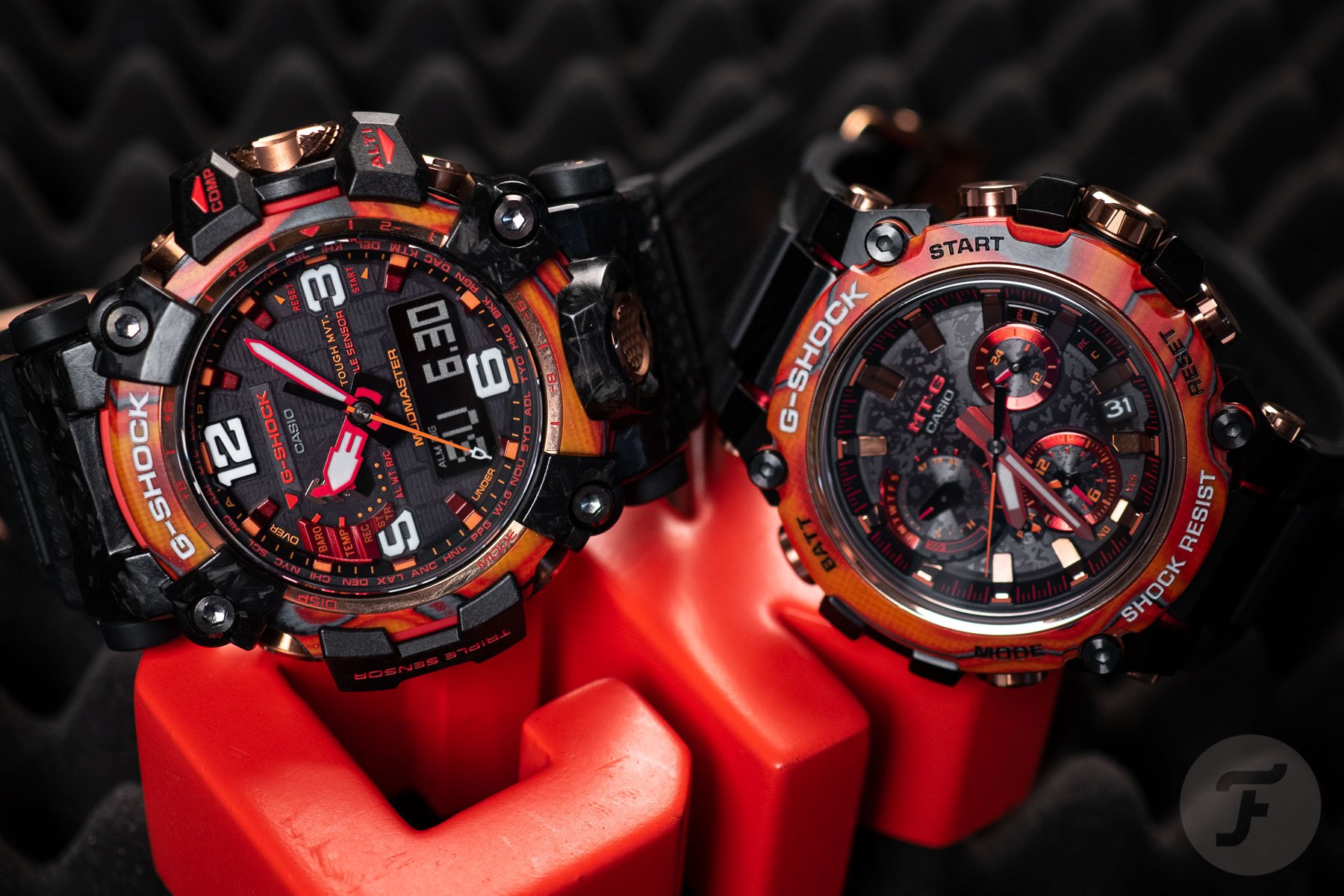 I would love to deliver a well-balanced conclusion here, but that’s going to be both problematic and incredibly easy. You see, all four Casio G-Shock 40th Anniversary watches have such strong characters, it will always be a case of love and hate with these. And that’s fantastic because who wants to sail under the radar when celebrating 40 years of ground-breaking watches? 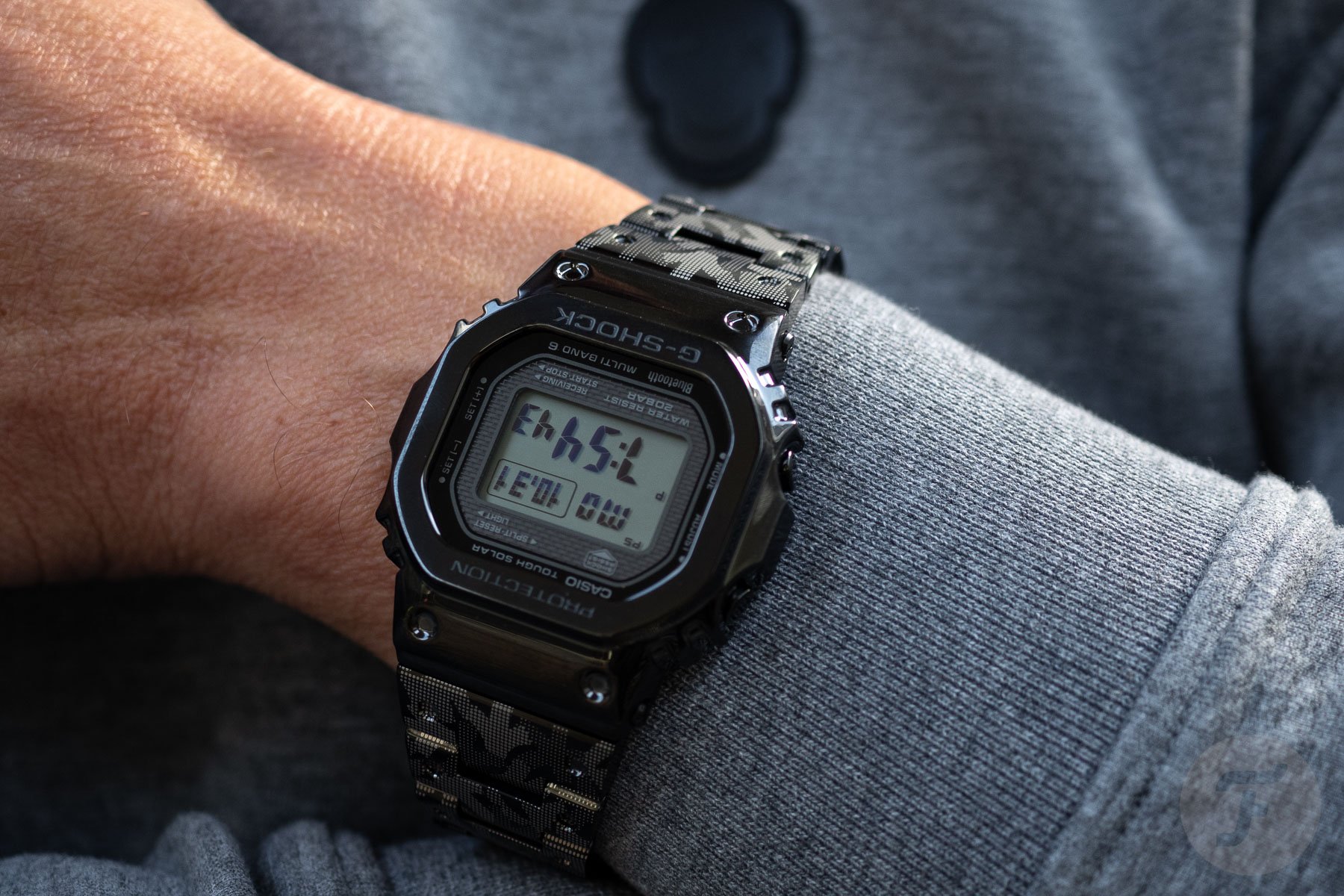 The GMW-B5000EH gets most of my attention because it has everything I want in a metal Square — a steel case, a distinct pattern, and a positive display. I do admire the craftsmanship that went into the exclusive MRG-B2000GA-1ADR Gassan since it’s so very Japanese in both a historic and a futuristic sense. 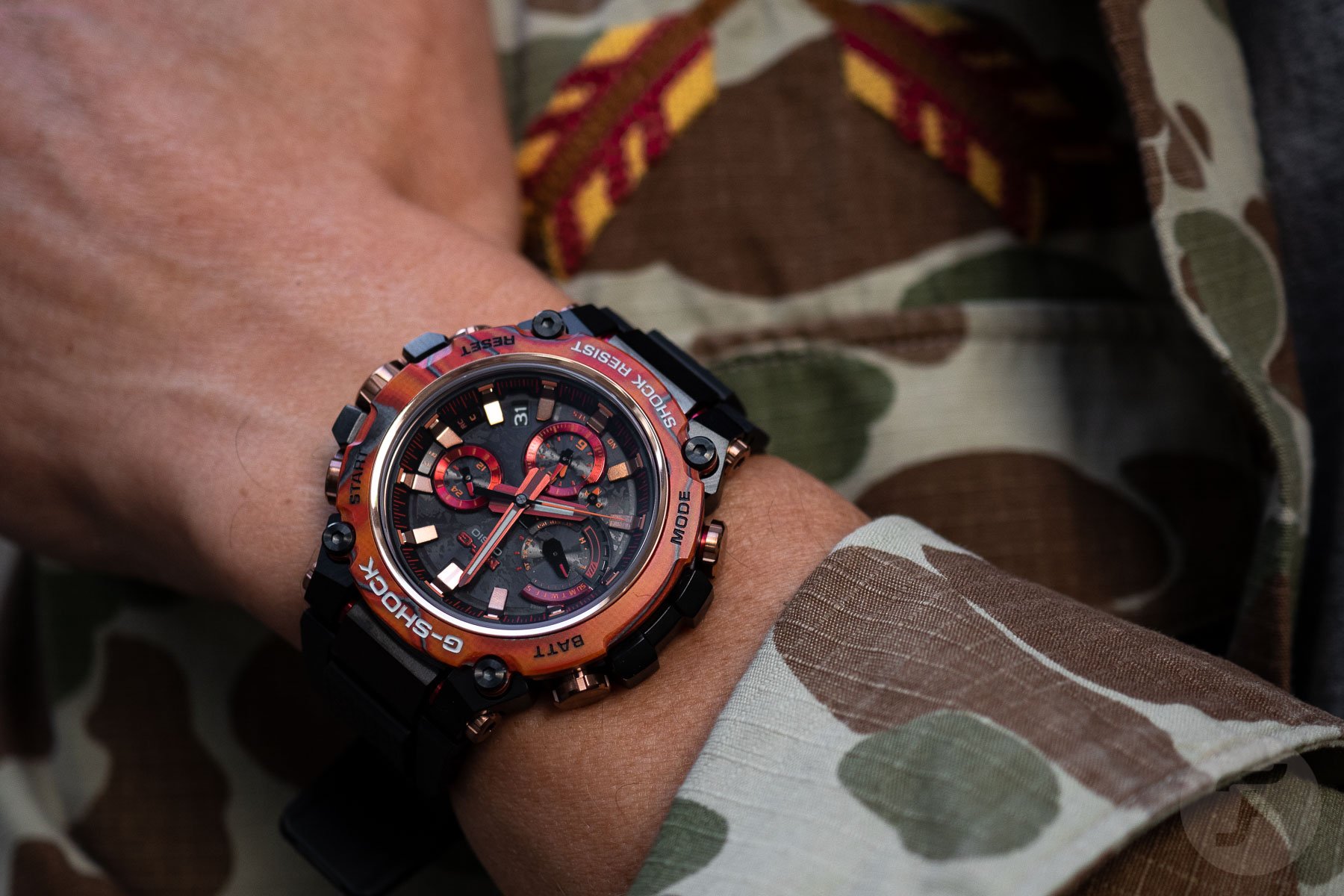 The Flare Red creatures require bold owners who don’t mind answering a question or two about their watches because the MTG-B3000FR-1AER­ and GWG-2040FR-1AER­ Mudmaster will grab attention. It’s a good thing there’s quite a bit to talk about. 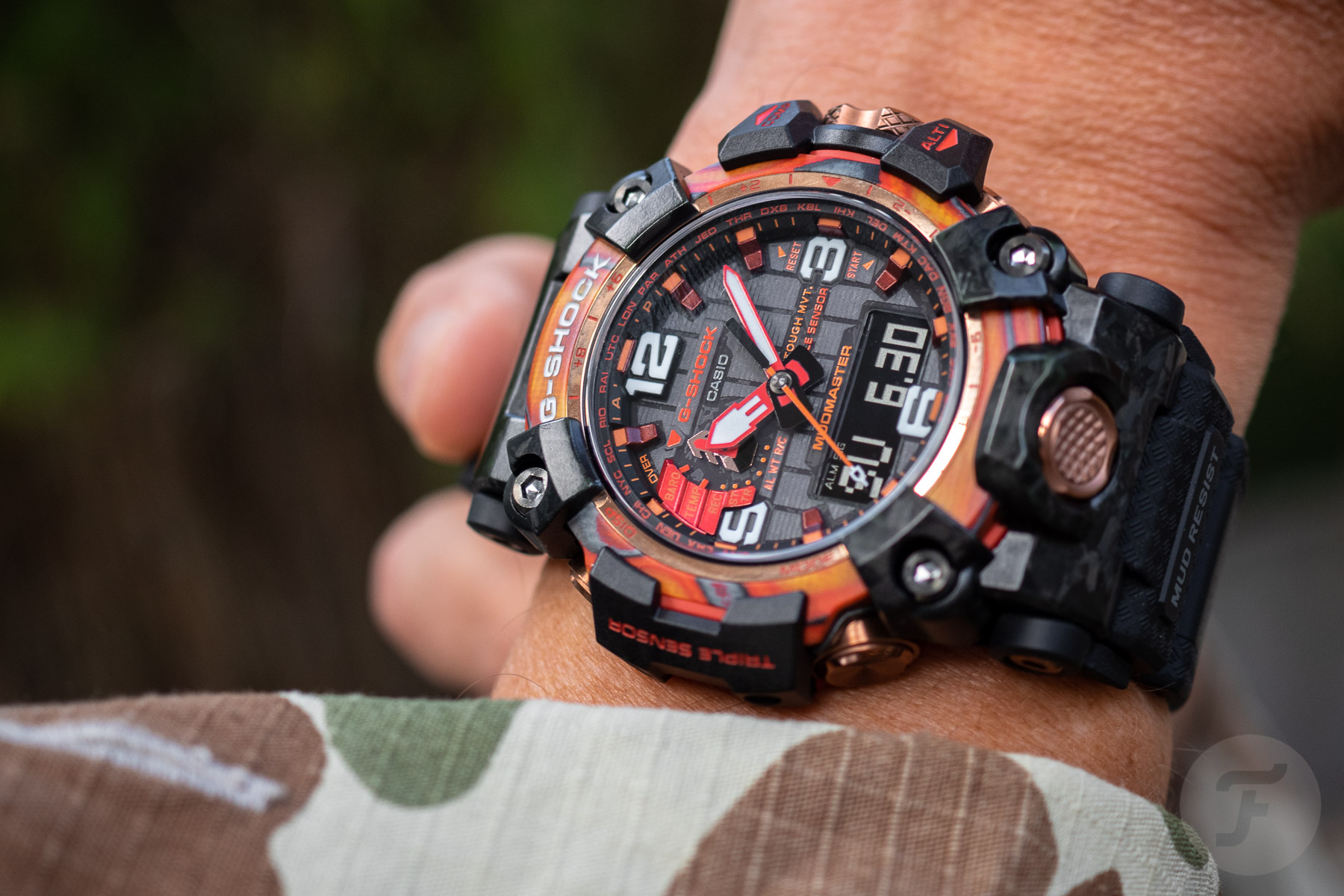 Find out more about availability and the high-tech insides of all four Casio G-Shock 40th anniversary watches on the brand’s official website.